PEZ Bookshelf: The Call of the Road

Cycling offers a grand buffet of disciplines, from the narrow specialities of track racing to the diversity needed for the open road, mountains or the looney antics of cyclocross (to say nothing of artistic cycling or bike polo or trials riding). Road racing is the golden-haired child today, where the money is and the stars shine but it was not always so. The origins, history and present state of road racing are nicely summarized in author Chris Sidwells’ book, “The Call of the Road: The History of Cycle Road Racing.” 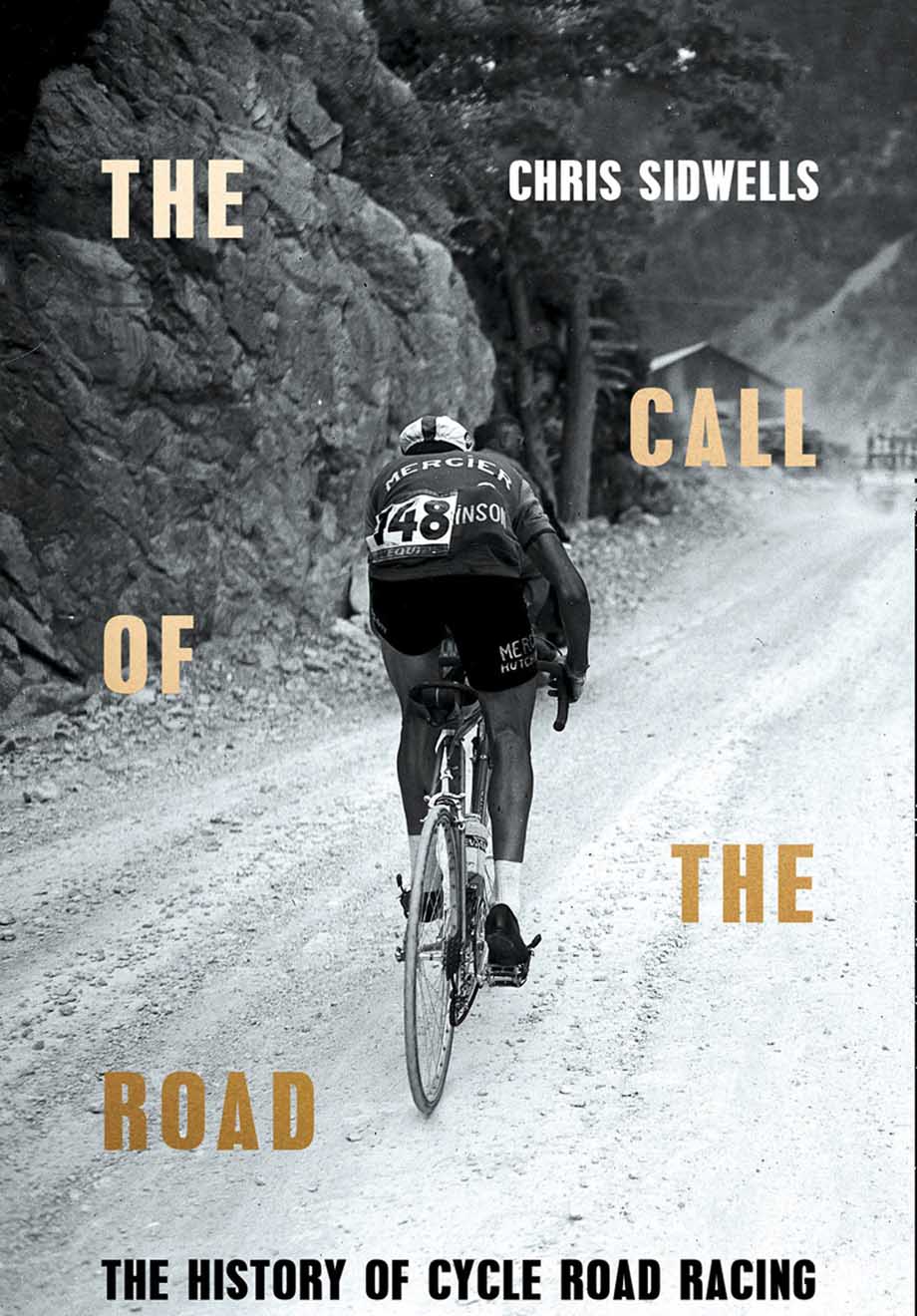 It can be argued that the first bicycle race took place when two cyclists met and there is debate about the first recorded race but it appears to have taken place in a park in Paris on May 31, 1868, when an Englishman, James Moore, won a race on a 2 km cinder track—there were apparently other races that day but the result of this one is the only one to have come to us. However, the same James Moore, on his bicycle (one of the very earliest high-wheelers, a prototype made in Paris) did win the first road race, which ran from Paris to Rouen on November 7, 1869. 31 men and one brave woman took to the road that day. Moore covered the 123 kms over muddy, bone-jarring roads in 11 hours 45 minutes. “Miss America,” probably an Englishwoman, finished 12 hours after Moore but was not the last, finishing more than 2 hours ahead of the final two stragglers.

Track racing was becoming well-established in Britain on high-wheelers and six-day races became popular as the cyclists covered ever longer distances. As the author notes about the 1,000 mile record of David Stanton set in 1878: “Watching a man ride round in circles on a big bike at thirteen and a bit miles per hour might not seem like a spectacle now, but Londoners flocked to see Stanton do it.” 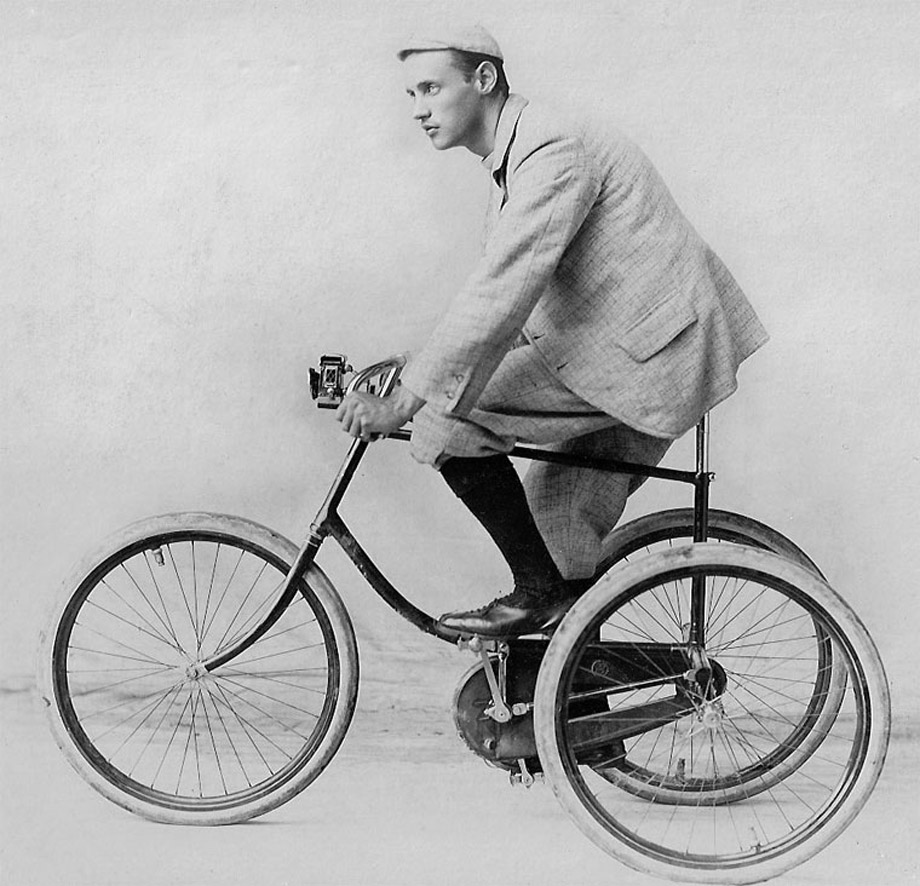 The advent of the safety bicycle in the 1880s transformed road racing transformed from short events on terrible roads to audacious tests of strength (still on terrible roads). The era of the great road race was launched in 1891 with Bordeaux-Paris, a jaunt of 572 kms to be done in one go. This was an event originally for professionals but at the request of British cycling officials it was changed to an amateur event to allow UK participation. British riders took the first four places. The winner was George Pilkington Mills, a noted long-distance record setter, who used fast pacers on the route and took minimal stops at control points. He finished the race in 26 hours and 36 minutes, finishing over an hour ahead of the next competitor.

Bordeaux-Paris (which continued as a professional race until 1988, and was held once more as an amateur event in 2014) was organized by a newspaper, Le Véloce Sport. In response, the editor of Le Petit Journal, Pierre Giffard, came up his own topper: the ordeal that was Paris-Brest-Paris, 1200 kms with no break. It was won by the first superstar of cycling, Frenchman Charles Terront, in 71 hours and 22 minutes. Ten thousand people welcomed him at the finish. Deemed too hard for professionals, the event continues every four years for amateur randonneurs who are not adverse to sleeping in ditches in the French countryside. 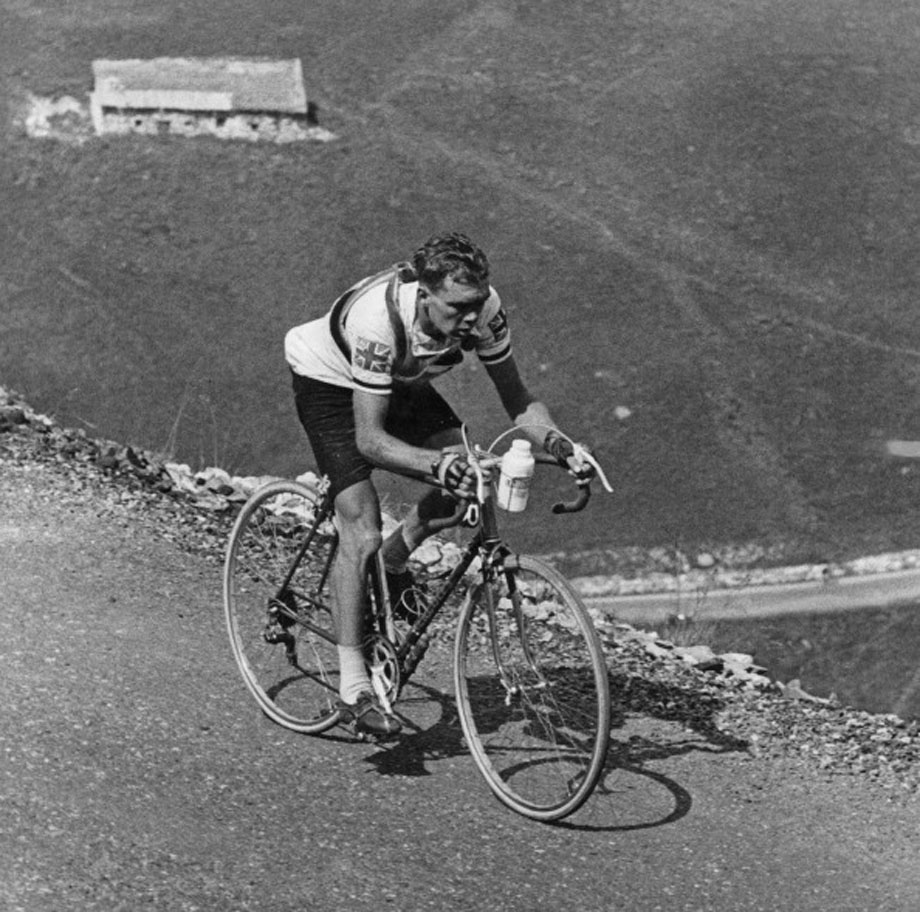 Of course, the success of these two races led to more and more and more. One day “monuments,” such as Liège-Bastogne-Liège and Paris-Roubaix, appeared and are a part of the modern racing calendar. But this was not enough and yet another newspaper, L’Auto, launched the first stage race, the truly monumental Tour de France, in 1903.

For those of us who have an extensive library, the author’s chapter on the Tour de France and its evolution does not cover new ground, but there are some interesting accounts of individuals, such as the Australian Hubert Opperman, who was invited to participate in the 1928 Tour as part of a four-man team. He eventually finished 18th and was wildly popular in Europe. He went on to further glory, setting a new record in 1929 on the Sydney to Melbourne road as a long-term way of preparing for the 1931 Paris-Brest-Paris. He returned to the Tour in 1931, finishing 12th, but then finished his P-B-P (then held only every 10 years) preparations, including a full-length ride of the route. He won this race, riding without teammates or support, in a sprint finish at the Velodrome Buffalo in 49 hours and 23 minutes. He rode a 100 km criterium the next day in Antwerp, then another the following day in Brussels before returning to Paris and then Amsterdam for more. “Oppy” was an excellent writer and the quotes from his account are terrific. 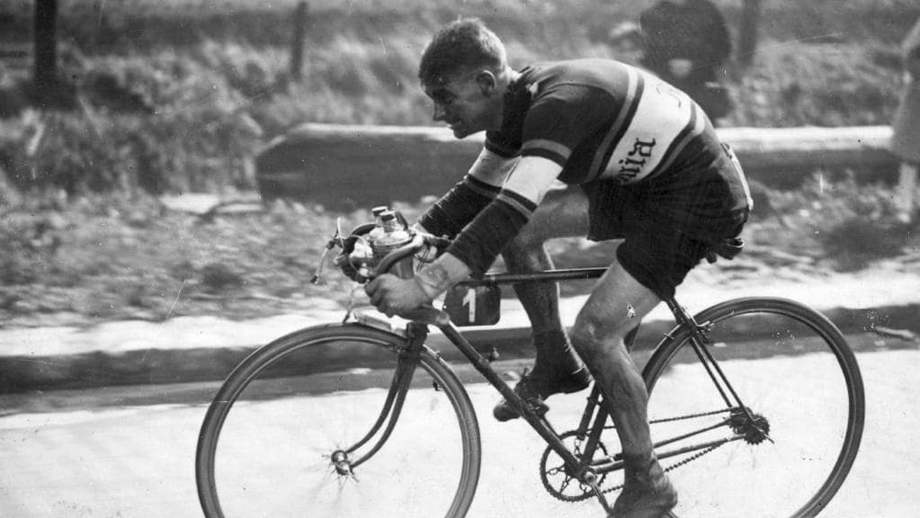 What is most enjoyable about “The Call of the Road” is the stories about lesser-known, or once-famous, races. Hubert Opperman appears again as a contestant in a truly crazy race, Australia’s Centenary 1000, a one-time event held in 1934 and won by Ted Stubenrauch, a dirt-poor amateur bushman cyclist whose cheap bicycle had received parts courtesy of the proceeds from a raffle at his local pub. Australian roads sounded pretty much non-existent and it was a brutal course indeed as even the following cars had to abandon. The cyclists, who ended up in a mountain top hotel in a blizzard, had to make their own way down the next day with no assistance. The stage was extended to 216 miles to keep the arrival schedule in Melbourne. Winning the Centenary 1000 (actually 1,000 miles).

The author has tried to provide a logical organization to the book, beginning with the general origins of road racing, to events in specific countries, to the iconic jerseys, to individual disciplines, such as climbing, sprinting and time-trialling. There is a very fine account of two interesting races of the past for time-triallists: the two-man Trofeo Baracchi and the Grand Prix des Nations, the latter being essentially the World Championship for time-trialling for elite men. Early road World Championships were time trials but the format switched to mass-start racing and did not return as a UCI event for time triallists until 1994. The author’s detailed description of the original Grand Prix des Nations course, where Jacques Anquetil shone with 9 win, is a highlight of the book. 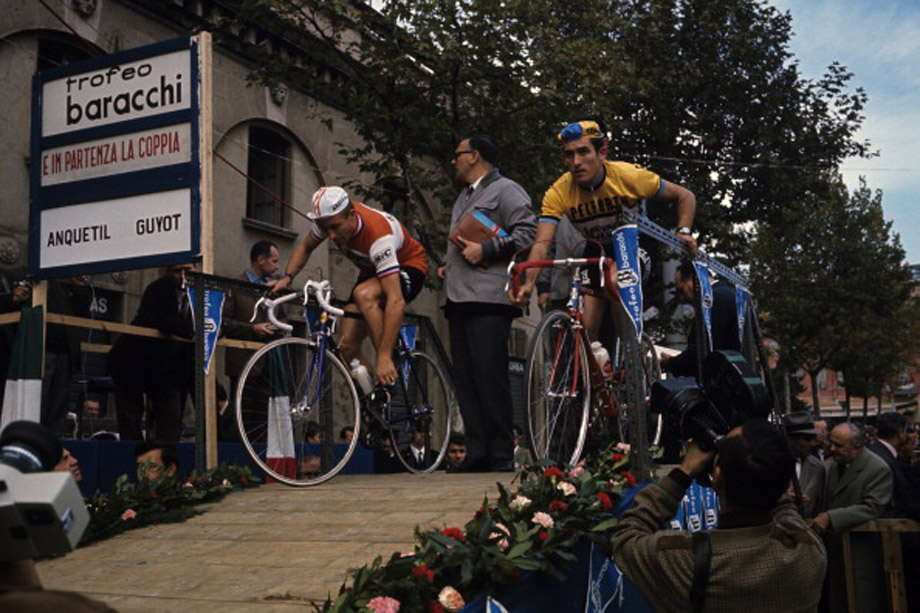 The Trofeo Baracchi also has an interesting history. Beginning as an amateur event, it switched to its unusual two-man format in 1949 and ran until 1990, changing to an individual time trial in the follow year, its last. Started in 1941 by businessman Mino Baracchi in memory of his father, an ardent cycling fan, the Trofeo Baracchi was won by the biggest names in racing. One of the best stories is about the 1962 race, in which Rudi Altig had to drag Anquetil, clearly having a bad day, around the course.

There is a lot of information here. For example, one never hears about the Ruban Jaune, created in 1936, and “is still awarded to the rider who wins a road race of 200 kilometers or more with the fastest average speed to date.” It has been awarded 12 times, often following Paris-Tours, a sprinter’s flat race. The current winner is Matteo Trentin, who set the bar at 49.641 km/h average in 2015 when he crossed the line in Tours. Amazingly, the Ruban Jaune was won following Paris-Roubaix in 1948, when Rik van Steenbergen won it at 43.612 km/h.

While the Grand Tours were drawing in the best professionals, the best “amateurs,” often state-supported, competed behind the Iron Curtain in the Peace Race, which began in 1948, eventually covering segments in the former German Democratic Republic, Poland, and the then-Czechoslovakia. After the fall of Communism in 1989, it had difficulty attracting sponsors and ended in 2006. Many of the riders became professional and joined teams in Western Europe but from the account in the book it is clear that the Peace Race was no walkover. The author writes about East Germany’s much-loved racer, Gustav-Adolf ‘Täve’ Schur, who won the Peace Race in 1955 and 1959 and supports efforts to keep the memory of the Peace Race alive as an amateur tour. (Parenthetically, it should be noted that Schur, who upon retirement became a Communist Party parliamentarian until 2002, has twice had his nomination for the German Sports Hall of Fame rejected due to his public statements that the extensive doping program of East German athletes, which had terrible consequences particularly for women, was harmless). 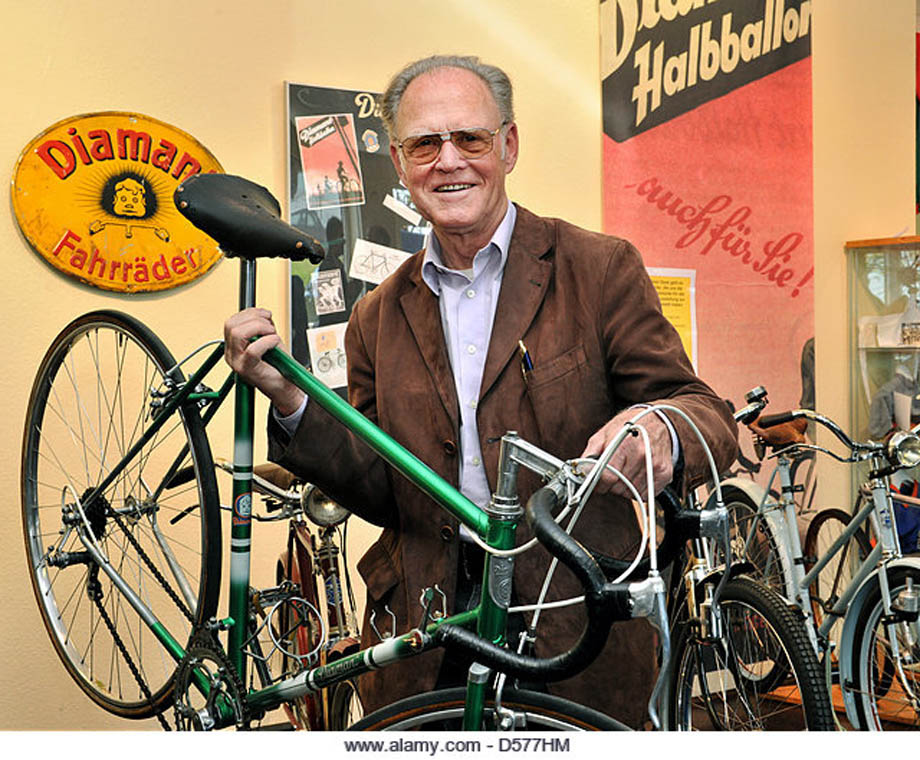 Although road racing was clearly anchored in Continental Europe (as it still is), the author recounts its growth in other places. As a British writer, he has focused on the UK experience, which saw top riders go to the Tour de France with occasional success and not much support, while at home road racing was stunted for decades by a focus entirely on individual time trialling. In some cases the results were spectacular as the astonishing record of Beryl Burton, who won 90 domestic races and seven world titles, indicates. 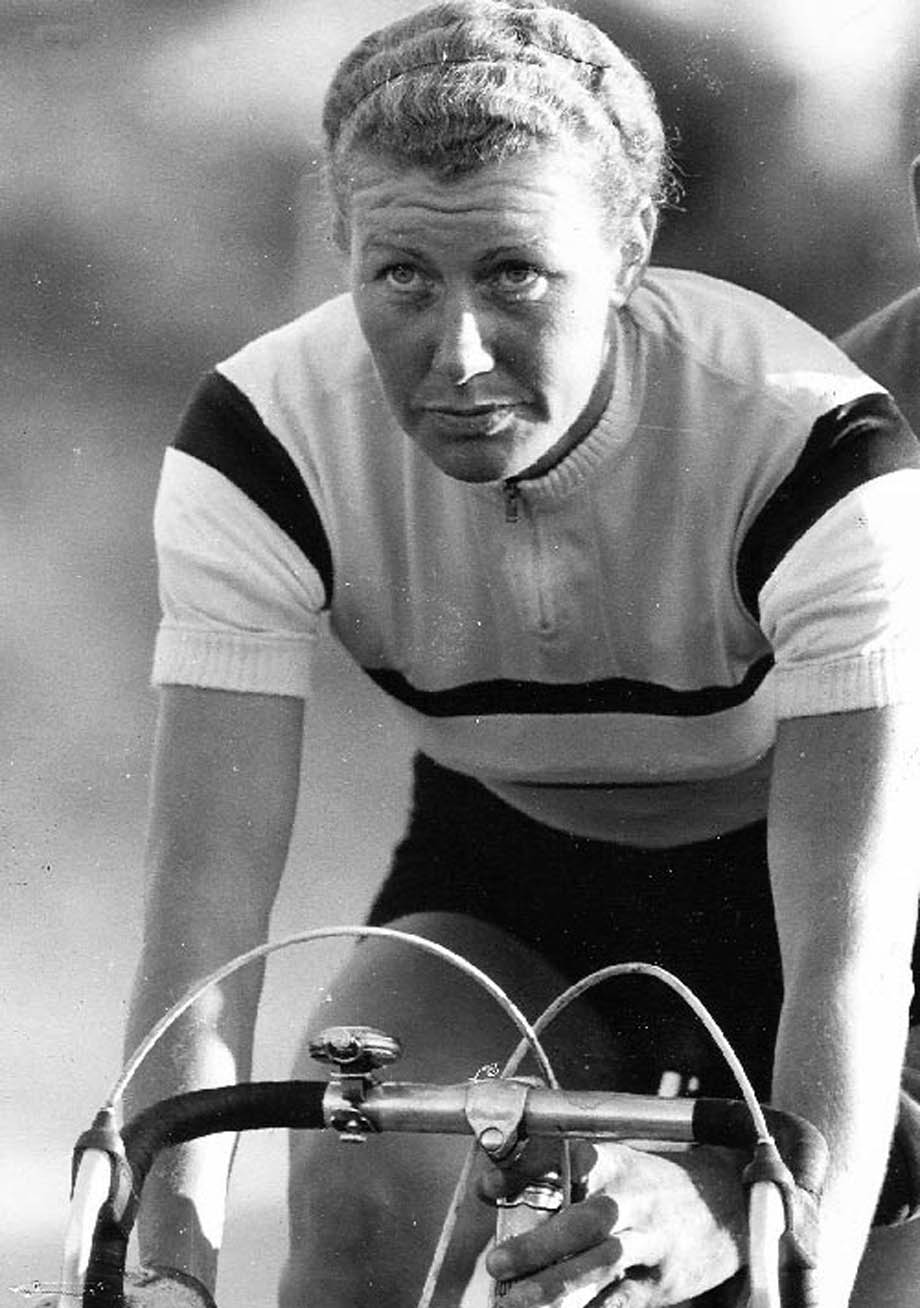 In others, it was more like a comedy of errors. In today’s racing scene, with British riders winning all three Grand Tours in 2018, holding the One Hour Record, and with a vibrant domestic calendar, it is hard to imagine such a change. The author is a fan of sprinter Mark Cavendish and recounts, in another excellent chapter which covers criteriums and kermesses, describes how the Manx Missile won three events in three days.

Australians have had their successes too, and the Colombians get a look-in. The achievements (pro and con) of American riders are well known. 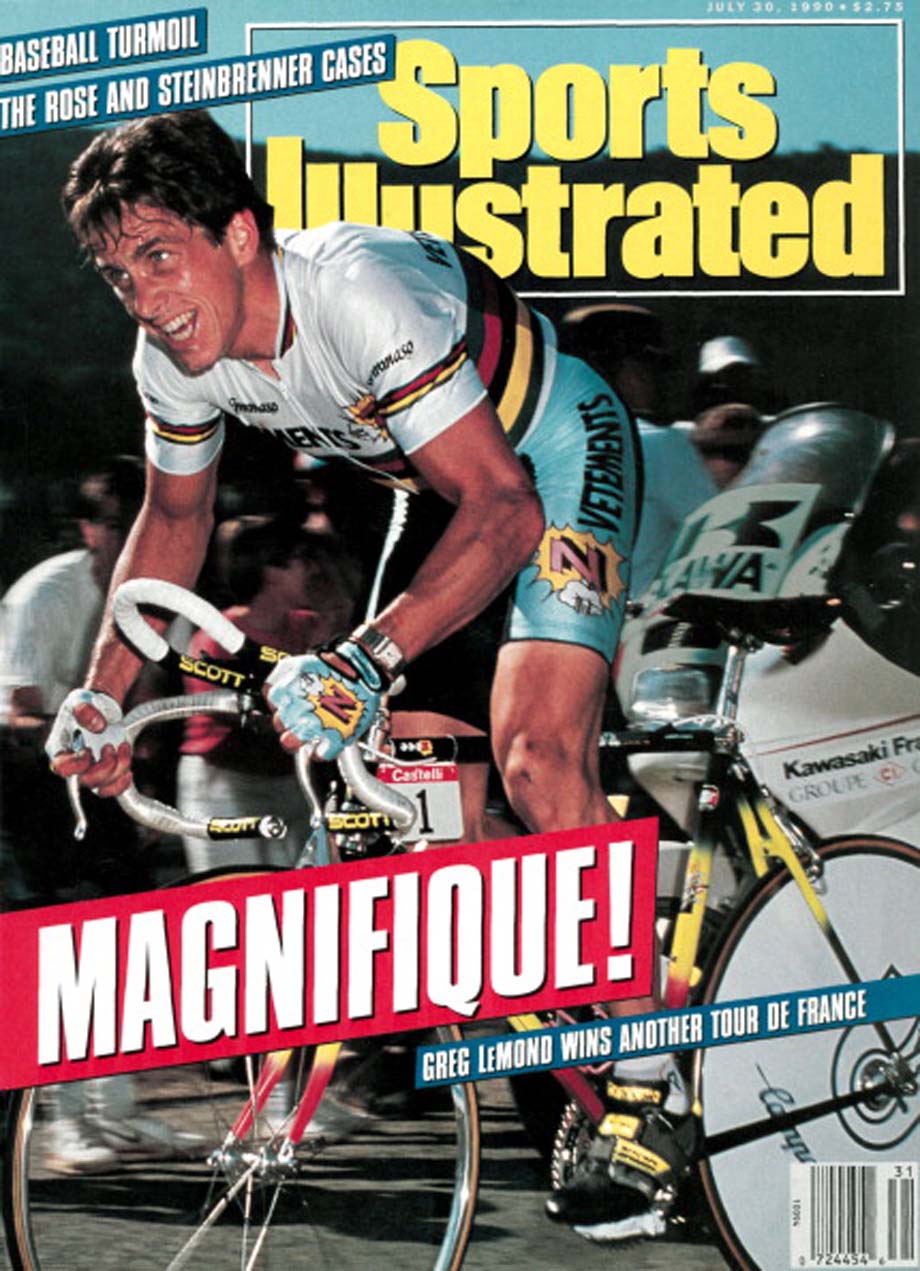 Greg Lemond on the cover of Sports Illustrated

The book concludes with a penultimate chapter on cycling legend Eddy Merckx, whose story always amazes, and finally ends with the elephant in the room: doping. Road racing has a long history of doping but history also tells us that we should not always judge the past with the standards of today. In its early days performance-enhancement seemed pretty haphazard, aimed more at recovery than anything else. But in the 1980s the emergence of more systemic efforts of sports doping, begun in East Germany, changed professional cycling and now even reaches down into the amateur ranks where, sadly, people riding gran fondos have been caught. After detailing the whole sorry Armstrong affair, the author writes hopefully that the doping epidemic of the EPO-era has receded, although he does note issues with the Therapeutic Use Exemption (TUE). The book was clearly written before Chris Froome’s Adverse Analytical Finding and its explanation-free resolution earlier this year.

“The Call of the Road” is a well-written, affectionate and entertaining book that covers a great deal of ground. For those interested in cycling history, it would provide an excellent starting point for further reading, proving that indeed there is a world of races beyond the Tour de France. In his opening comments, Chris Sidwells eloquently states: 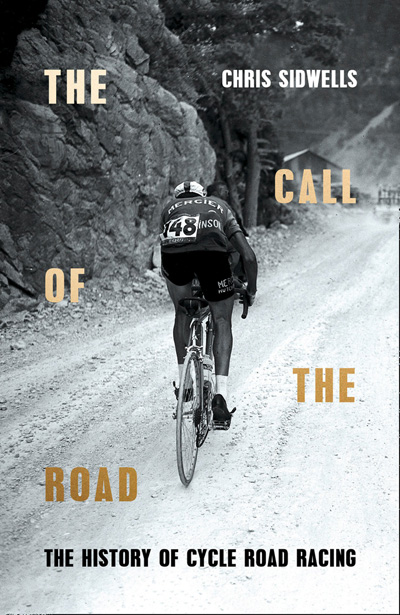 # Photos courtesy of the author. #

• BUY “How the Race Was Won: Cycling’s Top Minds Reveal the Road to Victory” at AMAZON.COM.

When not attempting to ride time trials while eating licorice allsorts, apparently the key to Beryl Burton’s success, Leslie Reissner may be found on his high-wheeler at www.tindonkey.com.