German author Hermann Hesse once wrote to the effect that love does not exist to make us happy but to measure how much we can suffer. And for those of us who love cycling it is pretty clear that the ability to suffer is a really, really important thing. From those early days of heavy boneshakers to riding unpaved passes in the Alps to endurance races that cross continents and even circle the world, great cyclists are noted for their toughness and “The Hardmen,” by the editors of the Velominati website, is a book that applauds the toughest of the tough in the peloton. 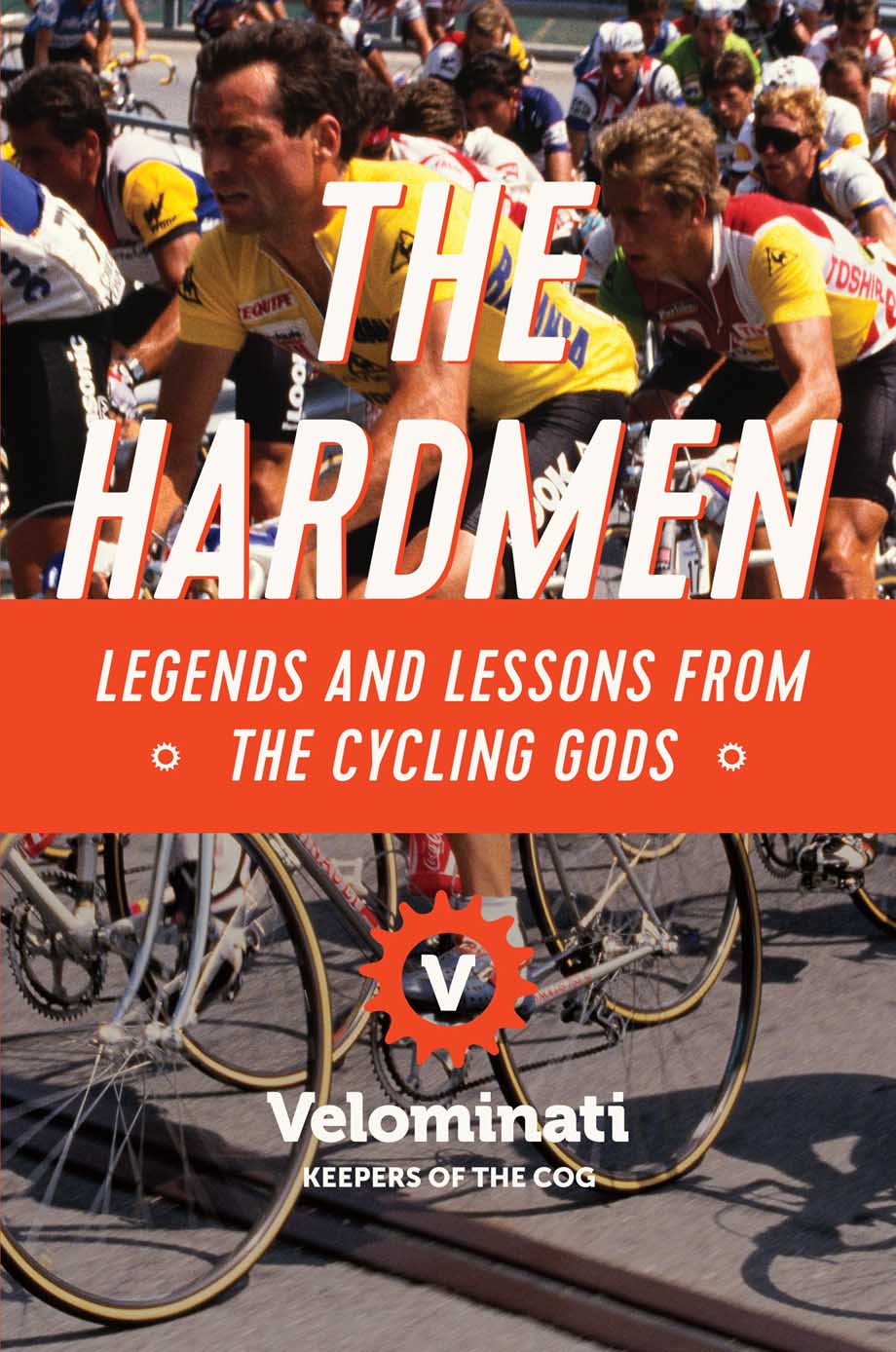 The Velominati is an online community noted for its efforts to compile an exhaustive and entertaining list of instructions for cyclists who might wish to emulate professional bike racers. This list was published as a book as well, “The Rules,” and for easy reference the Rules (all 93 of them) are included in “The Hardmen.” The Rules cover a lot, from etiquette to equipment to style. Euro is always good (use metric measurements, pronounce things properly) and some of the Rules are clearly designed to encourage debate and/or violence, such as the correct colour/length of socks. However, the key Rule for “The Hardmen” is clearly Rule #5 (also written as “V”) which simply states: “Harden the F*ck Up.” This Rule is mentioned often and is meant as encouragement. I think. 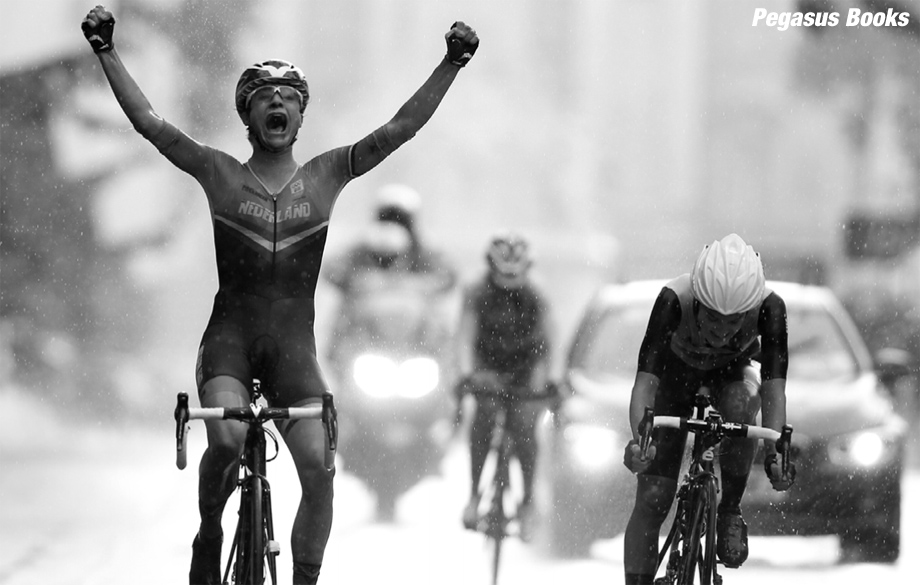 The book uses some novel orthography, such as capitalizing many words that are not usually done this way (“Cyclist” “Pro,” etc.) and the authors do not shy away from using obscenities (see Rule #5), sometimes in foreign languages. Not all Hardeman are alike so the book is divided into five sections, each of which describes a specialized kind of rider. Using the most appropriate language, we have “Les Rouleurs,” “Les Grimpeurs,” “De Klassiekers,” “Les Domestiques,” and “I Velocisti.” The book is festooned with many, many footnotes, which not only are useful to neophytes to pro cycling but are often quite amusing in themselves. 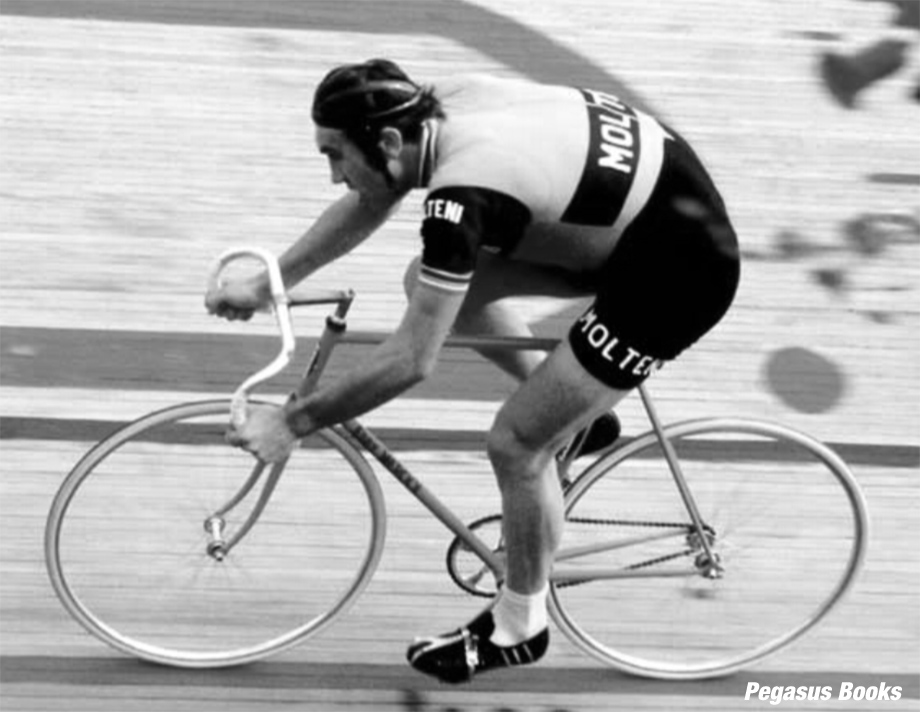 Given the brutality of pro cycling, it must have been very difficult to select the finalists for each section. The authors realize this and offer their excuses as to why some riders were not included: “would have required research,” and “forgot about them until after we were finished.” A clear failing of the book is the lack of reference to Fiorenzo Magni, who came second in the 1956 Giro after breaking his collarbone on Stage 12 and his humerus on Stage 16, riding the remainder of the race with a piece of inner tube gripped in his teeth and attached to the handlebars so he could steer. Ah, those were the days!

But there are a lot of other Hardmen (a definition which includes some remarkable women as well) stories to enjoy in this book. There are, of course, the legendary Cyclists—Eddy Merckx and Sean Kelly each get two chapters—and quite a few who were notable for a particularly brutal stage win, such as Stephen Roche whose win at La Plagne in 1987 meant he ended up in an ambulance where he was revived with oxygen at the finish line. As the authors note: “Riding sensibly, staying out of the red zone, not hurting yourself…it’s all overrated. What’s the worst that can happen? OK, besides ending up in an ambulance.” 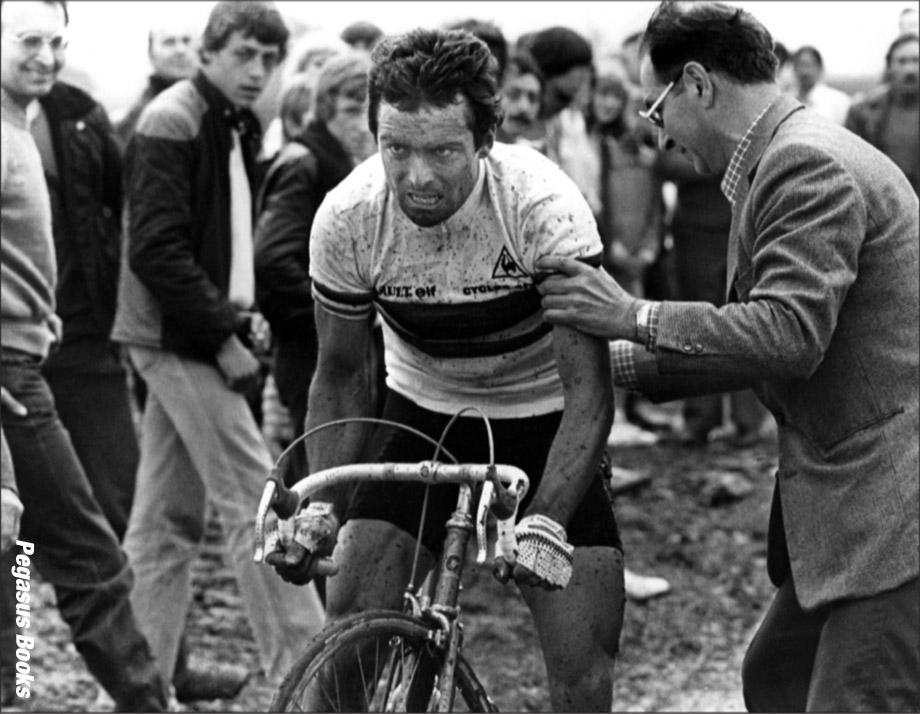 Bernard Hinault’s win at Paris-Roubaix in 1981 gets the nod, although his overlooked 1980 Liege-Bastogne-Liege win still ranks as one of the most brutal races of all time; the Badger lost feeling in one or two fingers permanently as a result of the cold weather. Hampsten’s epic ride up the Gavia (a stage he did not actually win!) is here, along with the frightening Jan Raas and the much-loved Jens Voigt, whom the authors characterize as having the Perfect Amount of Dumb. Hardmen (Hardwomen?) of the fairer sex include the indomitable Beryl Burton of England, who won the 1967 twelve-hour national time trial, beating the men as well with a performance that still stands as a record today, averaging 38.5 km/h over the twelve hours. The authors write: “Why would one even hold a twelve-hour time trial? Because there are enough nutters in Britain to compete in an event so desperate.” 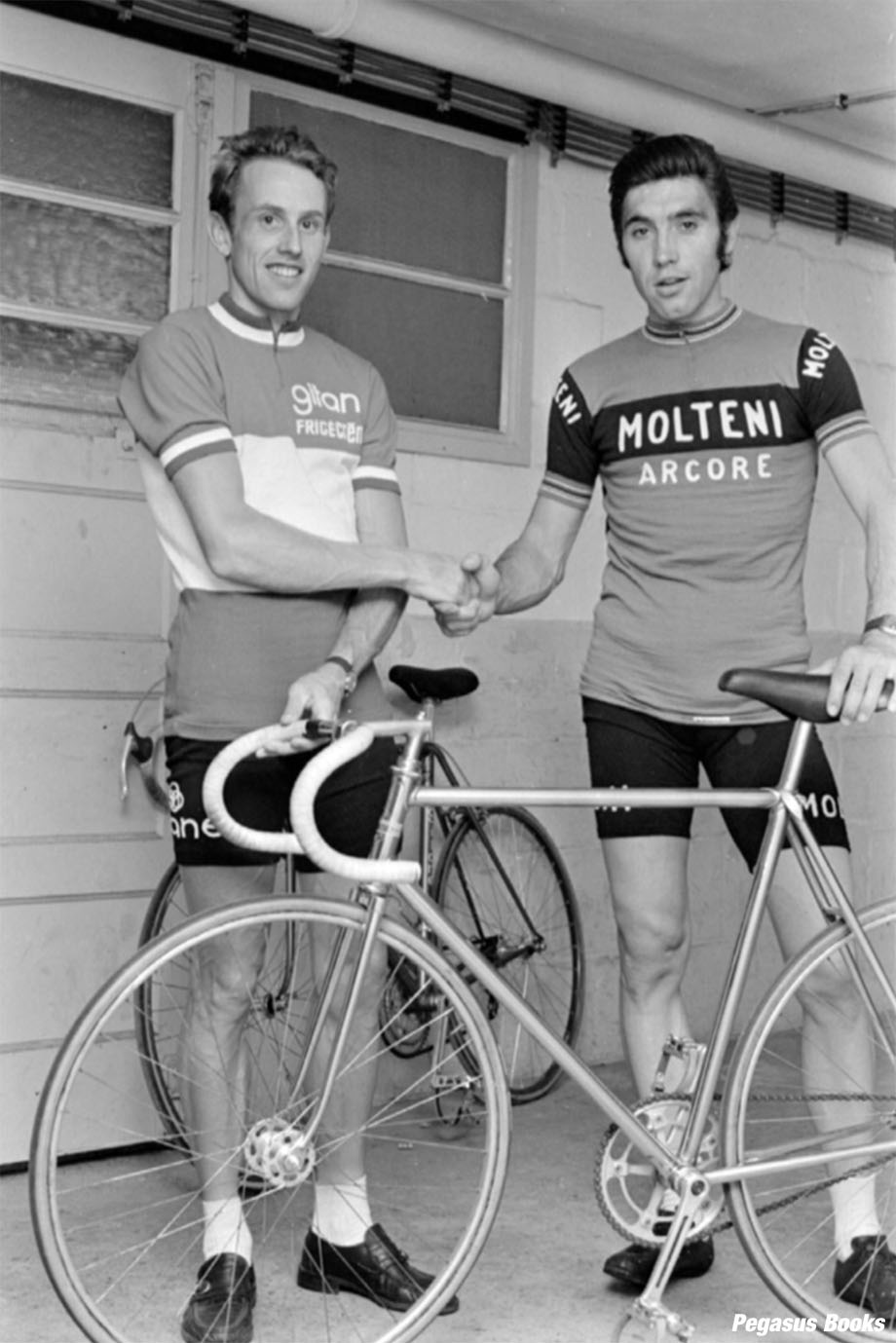 Great Hardmen are particularly to be found in Belgium and Northern France for the two races that really matter: Paris-Roubaix and the Tour of Flanders. Terrible weather, terrible roads, relentless competitors. It was good to see Gilbert Duclos-Lassalle included in one of the most poetic chapters in the book. He was a man who would not give up, determined to win Paris-Roubaix, although it took 18 years to do it. Winning at the age of 39 was not enough, however, as he came back the next year to win again. His last attempt saw him come in 19th in 1994. “Deep down, that’s exactly how he understood the hierarchy worked—that no matter how good you are and even if you’ve tasted victory, the cobbles always win in the end.”

For many riders, their great hope is to win a single stage of the Tour de France and one of the very best stage wins is included here as well. Eros Poli, a giant domestique nearly 2 meters tall, was in the employ of Mario Cippolini’s team in 1994 as a big engine in Super Mario’s sprint train. With no Super Mario present to work for, Eros decided to try something on his own account and, hilariously, outfoxed the climbers to win the stage over Mont Ventoux, relying on his excellent time trialling skills to get to the foot of the climb far ahead of the peloton and then dragging himself over the top. He bowed from the saddle at the finish line (!) and will live off of this story forever. 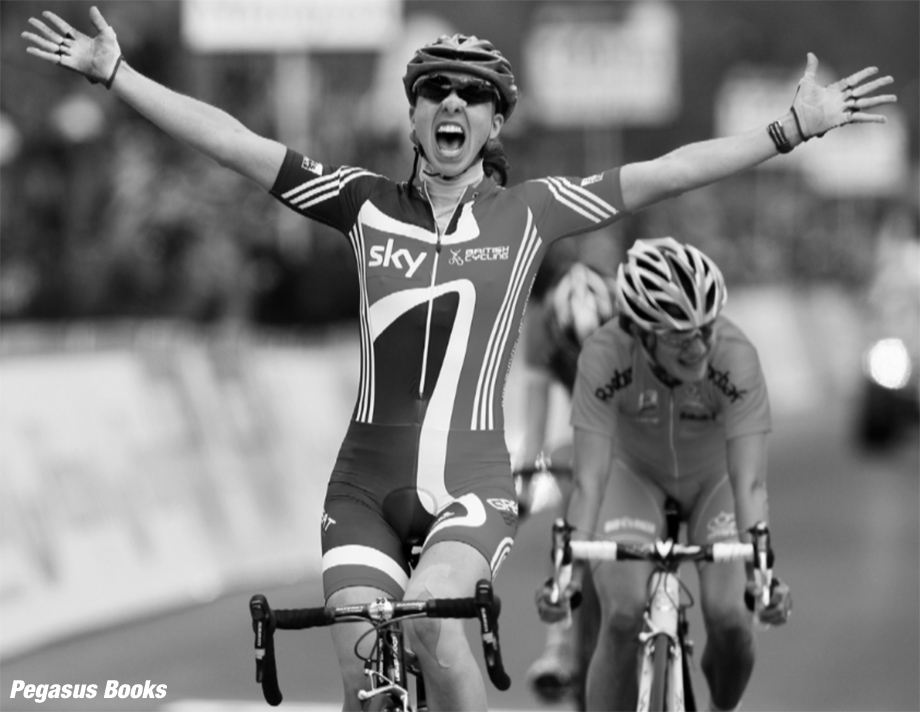 So many great stories, some of them even true; those that are not should be. “The Hardmen,” which appears to have been written under the influence of a whole lot of beer (Rule #47: Drink Tripels, don’t ride triples. “Cycling and beer are so intertwined we may never understand the full relationship.”) is not a work of deep scholarship but books that make you laugh out loud at times seldom are. Rule #5 is a good one for a cyclist to live by, even if the Velominati are simply wrong about sock colour. 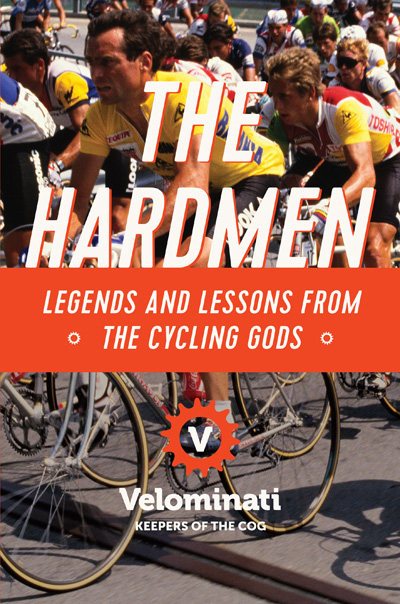 When not mulling Rule #41 (on the positioning of quick-release levers), Leslie Reissner may be found making his bike photogenic (Rule #26) at www.tindonkey.com

The 2018 Vuelta a España Route Revealed