The Cambridge Dictionary defines an almanac as “(1) a book published every year that includes information for that year such as important days, times of the sun rising and going down, or changes in the moon; and (2) a book published every year that contains facts and information about a particular subject or activity.” “The Road Book 2020” may not contain information on lunar phases but is a truly indispensable reference guide to the ups and down of this unique year in racing. 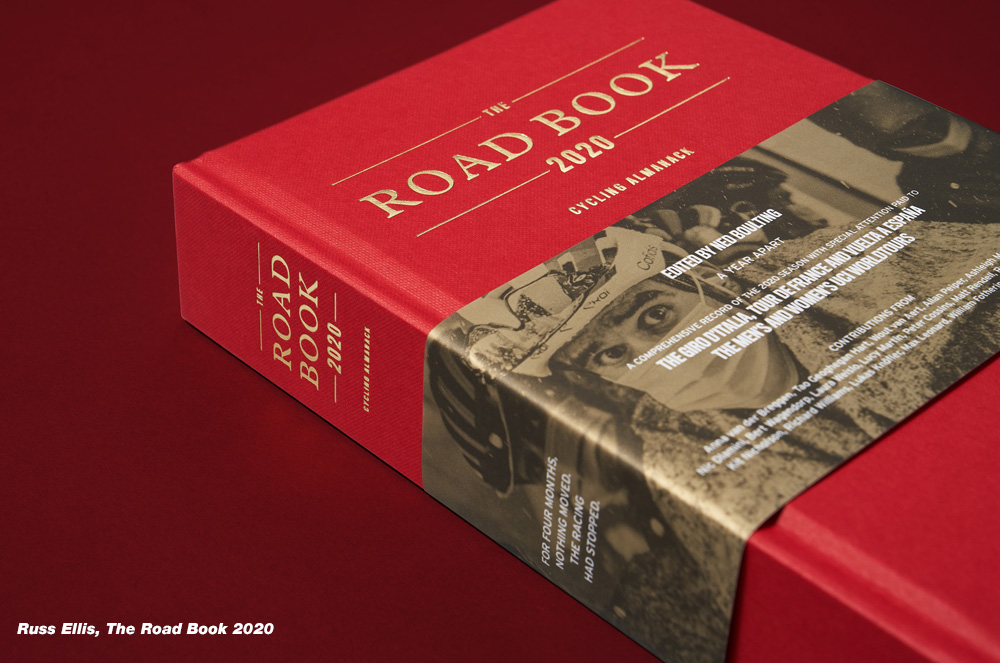 With its first edition appearing in 2018, The Road Book is an exhaustive resource covering pro racing and the latest volume boasts coverage of no fewer than 520 races. While many of these races are simply shown by listing results, the more noteworthy races—the Grand Tours, the Monuments, World Championships—are covered more extensively with brief but valuable commentaries. Add to this summaries of 177 pro racing teams, an historical survey of races, a photo section, and even coverage of the rather freakish virtual races held on indoor cycling apps where pros rode from their garages or basement and it is no wonder you end up with 650 pages of fine print in this nicely-bound hardcover book. 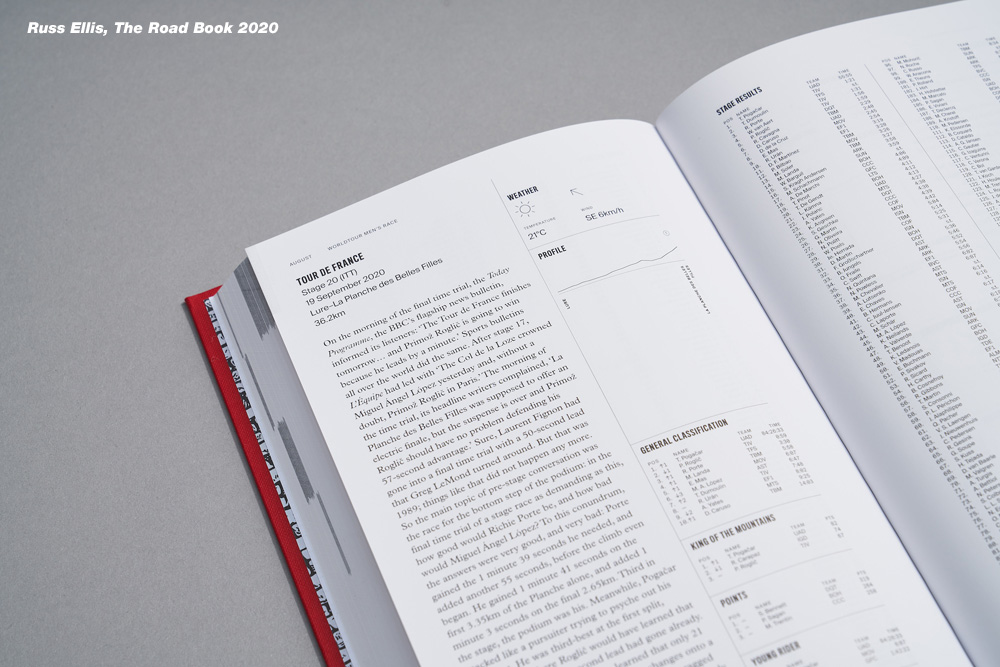 An additional highlight of The Road Book is the excellent selection of 26 essays by noted sports writers. Particularly elegant is editor Ned Boulting’s introductory essay that in fourteen concise pages provides an overview of the 2020 season. It was a strange year indeed, with the pandemic resulting in the shortening or cancellation of races, a hiatus from March until July, a jamming of many famous races into the calendar wherever they would fit (Strade Bianche in the heat of August instead of the drizzle of March; the Giro d’Italia after the Tour de France). The World Championships, only at the elite level, where held three days after the Tour ended and in Italy rather than Switzerland. The result of throwing all this into a kind of sporting blender provided many surprises and a whole lot of exceptional competition. Boulting provides a few choice sentences for each of the races that actually were run, concluding: “And so it has come to a close: the year that no one had ever imagined, that no one had ever wanted, but that everyone had loved. From a crisis, a fragile, beautiful endeavour had been called into life. While it lived it kept us all under its spell.”

We have here essays that contemplate the reputations of Eddy versus Remco; the unlikely unfolding of the Giro d’Italia; virtual racing from the standpoint of a pro rider; reflections on the July restarting of races in Romania; an intriguing look at when races fell off the calendar due to wars; a thoughtful profile of Netherlands rider Annemiek Van Vleuten, of whom it is written “it’s never clear if she is wrestling with her bike or with herself, or both. This is the athlete who once said: “I don’t like to suffer, but I’m good at it.” 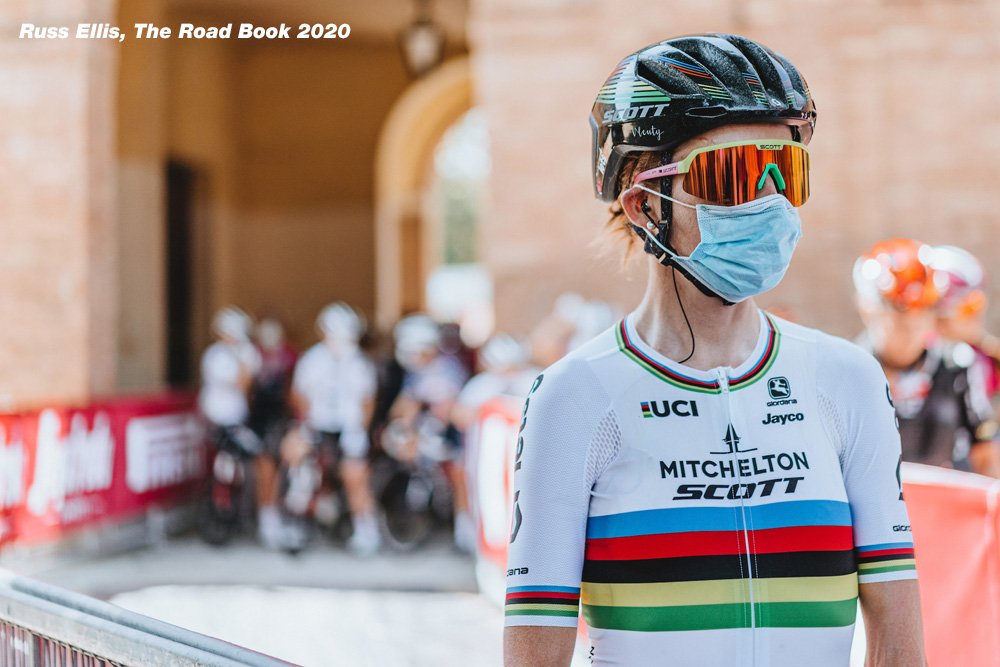 The simple coverage of the lower category pro races is actually as detailed as you will find since few journalists will write about, say, the Tour de Doubs in any detail beyond the local market. But thanks to The Road Book you will be able to confirm that this 200 km race from Morteau to Pontarlier was held under cloudy skies on September 6th. It was 16C and the wind came from the northeast at 7 km/h. The race was won by Loïc Vliegen of Circus-Wanty Gobert (UCI Proteam level). Delving further into the book, you will learn that Vliegen, a Belgian, has been a professional for six years, has had three wins, has appeared in two Grand Tours, and is No. 137 (of 150 listed) in the UCI Men’s End-of-Season Rankings with 296 points. Also, Circus-Wanty Gobert has had eight name changes between 2009 and 2020. 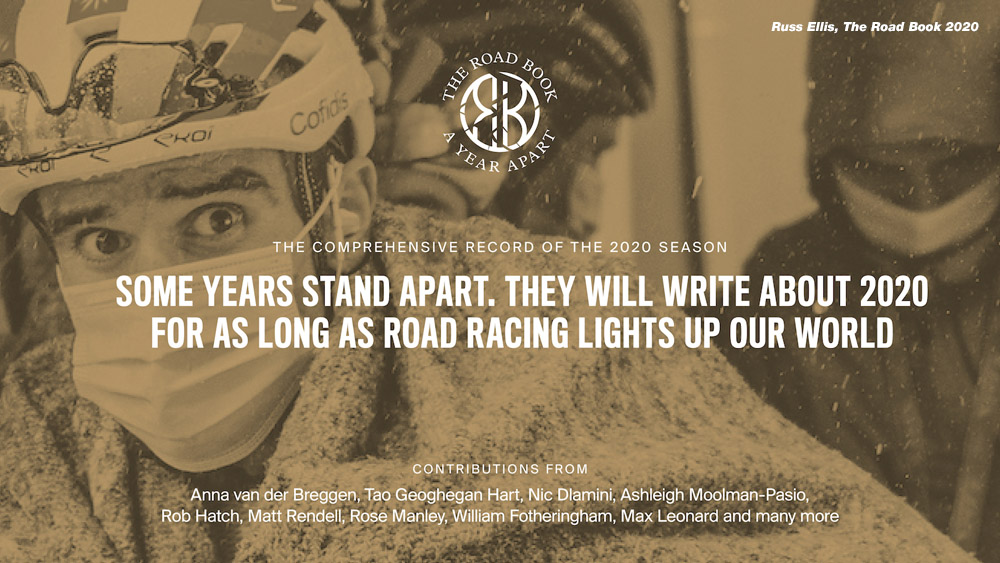 In addition to the weather report, the World Tour coverage also gives the reader a stage profile, an indication of who was in the breakaway, who won the stage and holds the general classification as well as the King of the Mountains, points leader best young rider and those who snatched up the bonuses. This factual information is joined by a commentary that is often a first-rate example of good writing—sometimes emotional, sometimes pensive, sometimes funny. A typical example would be from Stage 1 of Tirreno-Adriatico (a race Eddy Merckx never won, by the way):

But with an extraordinary turn of pace, Ackermann slalomed through the bunch, slipped through an impossibly small gap between his rival and the hoardings, and charged for the line, seated all the way. Even as his seemingly inevitable victory was stolen out from under him, Gaviria conceded a wry smile to the victorious German. 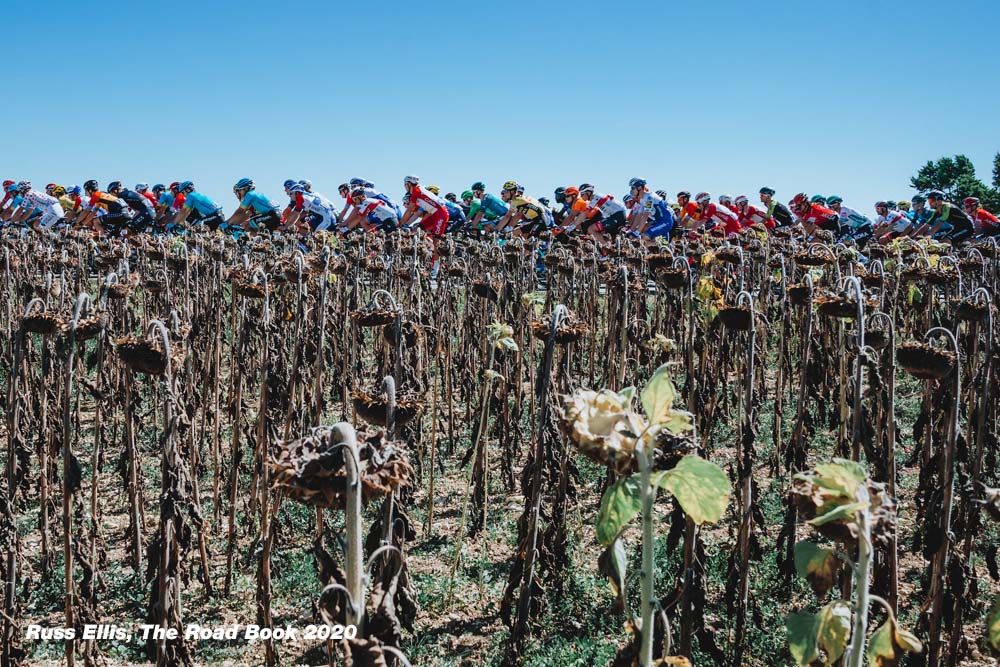 Or how about this bit of commentary about Stage 2 of the Giro d’Italia, which begins with a reflection on the 5th Century BC philosopher Empedocles, a native of Agriento, and his view that the universe was made of four fundamental elements and eventually brings us here :

Luca Wackermann made a brave but doomed attack before Ulissi darted away, accompanied by the Dane Mikel Honoré, as Peter Sagan gave chase. Ulissi, a verteran of six Giro stage wins already, handled the threat expertly: as Sagan made the bridge, the Tuscan (who shares his name with the hero of the Odyssey) set sail into the void and perhaps, just perhaps, an imperceptible seismic shiver of recognition shook ancient Agrigento’s extraordinary foundations. 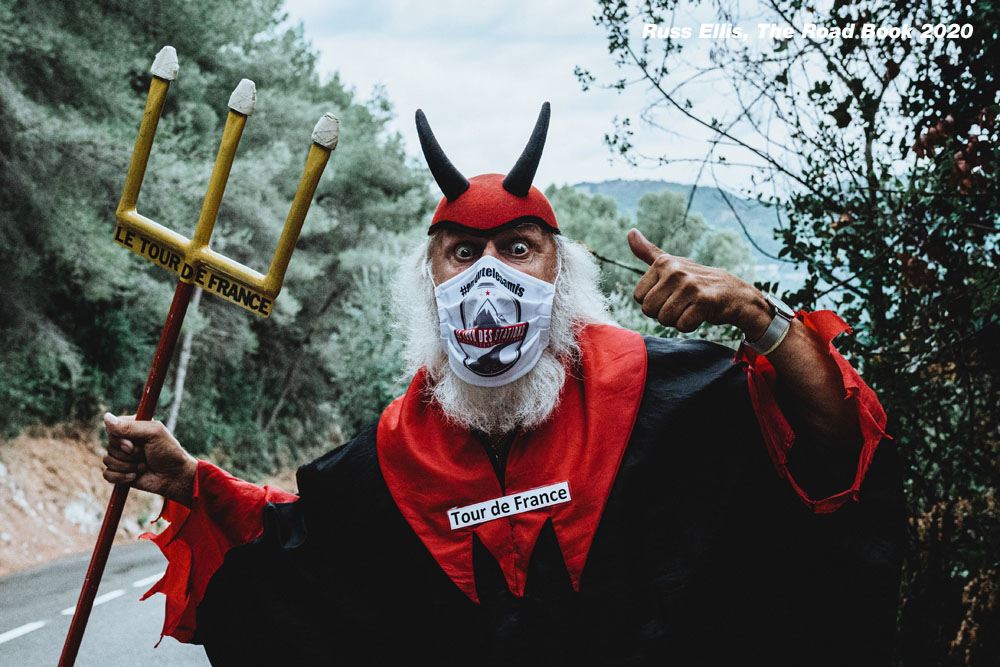 As if this cornucopia of stages (1,681 in all!) is not exhaustive enough, there are charts showing which teams were most often in breakaways and a graphic examination of the ebb and flow of pro riders’ careers. And readers of The Road Book are able to vote for their favourite riders and while some of the winners (Wout van Aert, Tao Geoghegan Hart, Anna van der Breggen) provided their own comments about the season, my favourite of these essays that lead off the book is by Alan Peiper, writing about Tadej Pogačar at the Tour de France from his own perspective of the Directeur Sportif of a UAE team that was gradually falling apart during the race:

Can we just enjoy the moment for now? Otherwise the moment just passes. This was the pinnacle of my career, my life. I only wanted one thing as a kid and that was a bike. So, yeah, this is the achievement of my life.

Running through the presses only a week after the end of the Vuelta a España ended in November. The Road Book 2020 is impressively current, with perhaps the only noteworthy things to happen since are the planned return of Team Manager Rod Ellingworth to Ineos Grenadier after only a year at Bahrain-McLaren and the planned return of Mark Cavendish to now-Deceuninck – Quick-Step. With the arrival of vaccines to combat Covid-19, we can hope that 2021 will return to a more normal season. (Preferably without the desperation and emotional withdrawal that makes people actually watch an e-race). Until then, The Road Book 2020 is a great way to enjoy the moment for now—so many moments from the unprecedented season we have witnessed this year. A must-have.

The Road Book 2020 from Ned Boulting on Vimeo. 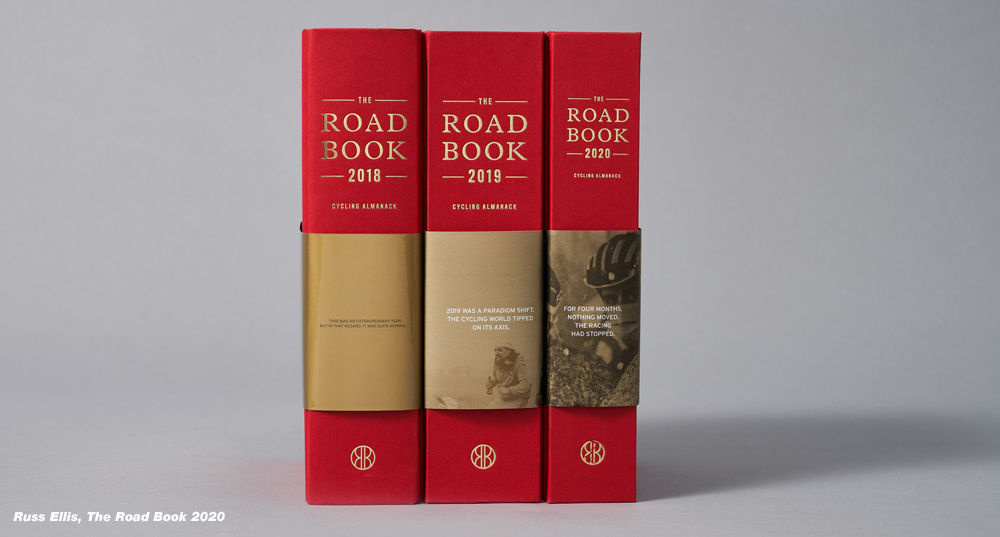