It is said that when the snow melts away and daylight lengthens, the thoughts of many turn towards romance. But for more than a few, it means the joyful return of the great one-day bicycle races and yet, as the recently-released VeloPress book “The Spring Classics,” suggests, the two things are not mutually exclusive.

A Review of “The Spring Classics: Cycling’s Greatest One-Day Races”

A previous VeloPress book on the Paris-Roubaix race was ,a href=https://pezcyclingnews.com/?pg=fullstory&id=5805 target=_blank>reviewed here and this new book has some similarities with it. The new book was also published originally in French and features an all-star cast of French sports writers. There is additional material from Samuel Abt and John Wilcockson. The introduction is furnished by the inimitable and, in an English-language book on pro bike racing, the perhaps unavoidable Paul Sherwen. He brings a peronsal view of what all the suffering and accomplishment in these races can mean. The 1983 photo of him, muddy and tormented at Paris-Roubaix, sums it up better than mere words can. 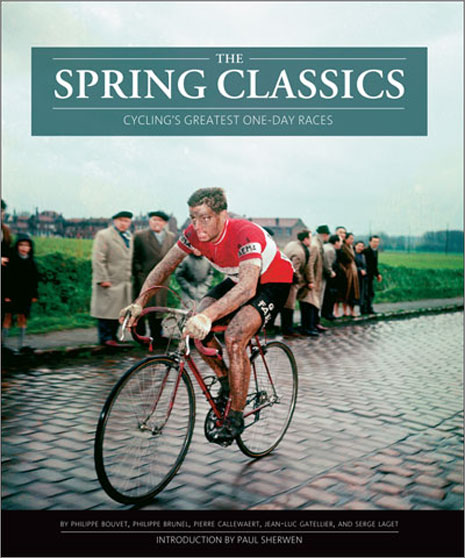 The strength of this large-format book are in its highly-detailed photographs conveying expectation, effort, exhaustion, disappointment, triumph.As good as the accompanying essays are, the images are usually more persuasive and certainly more moving.

First of all, we have a case of misleading advertising. Although all the races normally considered “Spring Classics” are represented, the book includes a number of races that may have once taken place in Spring, such as Paris-Tours, but I am quite certain an event nicknamed “The Race of the Falling Leaves” was never one of these. But more is better than less sometimes and getting the Tour of Lombardy, along with second-ranked races like the Championship of Zьrich or even extinct ones like Bordeaux-Paris, is a nice bonus.

The book informs us that the Tour de France, which began in 1902, was simply a linking of existing classics races. Mass media, which views pro cycling as a marginal professional sport, tends to focus on the national stage races, particularly the Tour, which require winners to excel in several disciplines yet “the classics are far from being preparation races and even further from being consolation races. They have their own lives, their own riches, a fantastic history, and a legitimacy that harkens back to the sport’s origins.”

Beginning with Liиge-Bastogne-Liиge, which first took place in 1892, “The Spring Classics” takes us through the great races in chronological order of when they were first run. The account of L-B-L is followed by Paris-Roubaix, Paris-Tours, the Tour of Flanders, Milan-San Remo, the Tour of Lombardy and the Amstel Gold Race, before including several more modern races that will not likely ever be considered as true classics. 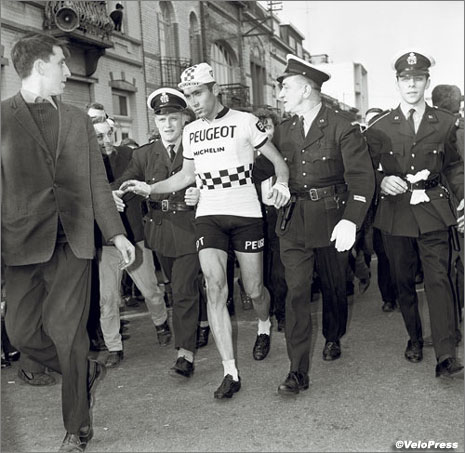 21 year old Eddy Merckx heads to the podium at Milano-Sanremo.

With the exception of perhaps Paris-Roubaix, many of the stories told in each chapter are fairly unfamiliar to English-language readers. The account of Bernard Hinault’s victory in the deep snow of the 1980 L-B-L, where he finished nine minutes ahead of the second-place rider, is epic. In similar conditions in May 1957, the race saw only 15 of its 107 starters make it to the finish line. A striking black-and-white photo of that race shows cyclists walking around a railway level crossing in a snow squall.

The chapter includes a section covering the Flиche Wallonne, the other race in the French-speaking part of Belgium, named “Fleche” as it was meant to be like an arrow between two cities in the province. In 1967, Eddy Merckx, only 21 years old, is escorted to the podium and there is more than a hint of the confidence and strength in the photo that marked the beginning to cycling’s most successful career. 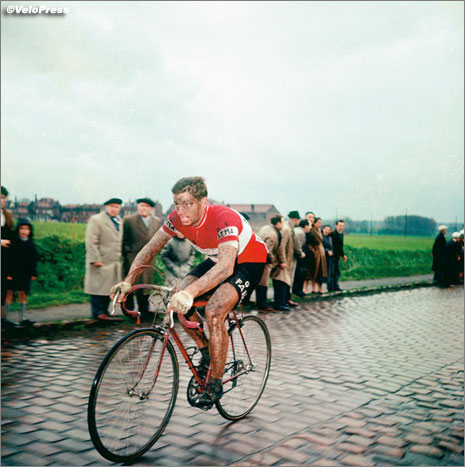 A rampaging Rik Van Looy racing for the Flandria juggernaut.

Enough has been said about Paris-Roubaix that its status as a classic is unquestionable. The photos here show the mud and anguish of the cobbles but three-time winner Rik Van Looy, the subject also of the cover photo, looks undaunted by the challenge of the race in 1960, although forced to retire eventually due to a broken fork. Mechanical failure is a common theme of Paris-Roubaix, although it does not make for photos as dramatic as human collapse.

Well, not always. In the 1950 Paris-Tours race, Charles Coste broke away solo, only to be stopped by a puncture. In two photos, he first stands by the road, holding his bike, having removed the flat front wheel in preparation for the change. But no support comes and the team cars simply drive by and Coste waves his arms in fury and disappointment. 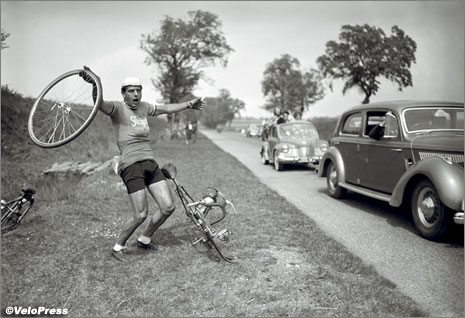 A raging Charles Coste watches his chances of glory disappear with the cars.

And so the season goes forward. The Tour of Flanders is featured next, with its ridiculous murderous Koppenberg and the so often decisive climb of the Kapelmuur. It was surprising to read that until the 1950s (the race began in 1913), only a handful of the brutal bergs, steep and cobbled and regarded as the defining characteristic of the race, were included, compared to the usual 15 or so considered normal today. 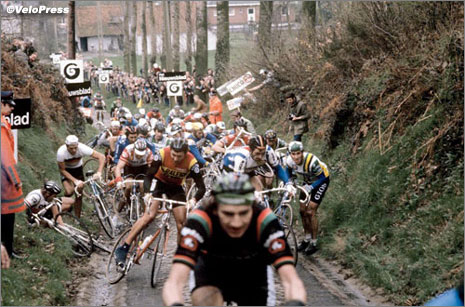 It wouldn’t be Flanders without an image of the chaos of the Koppenberg.

And Milan-San Remo was different too: the roads, rutted and in disrepair, were so dirty and dusty that the organizers hired people to clean the riders (and their jerseys) at the finish line! And as hard as L-B-L has been at times, probably nothing will equal the 4th edition of Milan-San Remo in 1910, where snow blew across the Turchino Pass and riders got lost as they travelled through villages unsign-posted. The cold and the mud broke the field down and the race ended in the way that Henri Desgranges had once hoped the Tour De France would end. That is, the winner would be the only rider to make it to the end. In the case of the 1910 Milan San-Remo, a race we associate today with big sprint finishes after a fast cruise past Mediterranean beaches, the winner was France’s Eugиne Christophe, followed by two Italians. Of 71 starters, only these three managed to finish.

The photos are a wonderful cross-section. Here is bird-like Fausto Coppi, mobbed in the Bianchi team car after victory in Milan San-Remo in 1949; Eddy Merckx in full sprint flight over the finish line at the same race in 1966; bespectacled Jan Raas climbing the Hulsberg at Amstel Gold on his elegant Raleigh, leading World Champion Freddy Maertens in 1982; Swiss ace Ferdi Kьbler gloriously taking Liиge-Bastogne-Liиge after winning the Flиche Wallone in 1952; Louison Bobet’s inhuman legs on display during a clothing change during Paris-Bordeaux. 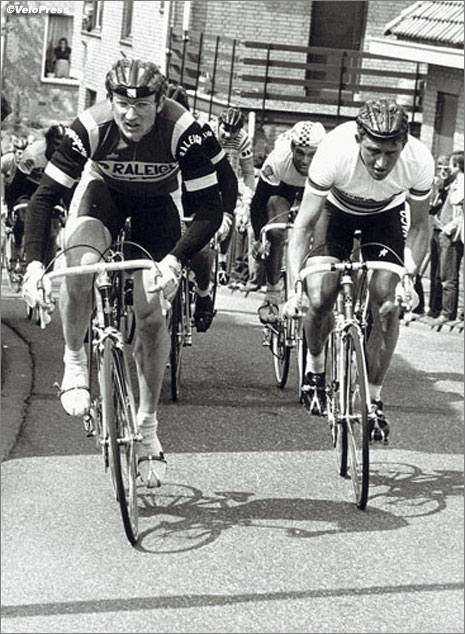 In addition to the somewhat misleading title, the book has a few other faults: while all the accents appear as they should on French words and place names, Ferdi Kьbler’s surname is missing its umlaut and there is also no proper index. The bigger issue with this book is the disappointing reproduction of the colour photos. The black-and-white ones are impeccable: sharp, dramatic, powerful. The colour photos, on the other hand, have a weird balance of shades that cannot possibly be correct. At first I thought that colour photos from the early 1960s might have been a problem but even recent photos have a kind of Soviet postcard appearance. A case in point is the Swiss landscape picture on page 181, which was shot in 1993 and has particularly strangely saturated green tones. Although the overall effect is somewhat off-putting, the black-and-white photos that make up the majority of the book make it definitely worth acquiring. I hope that VeloPress will be able to avoid this problem in future publications. 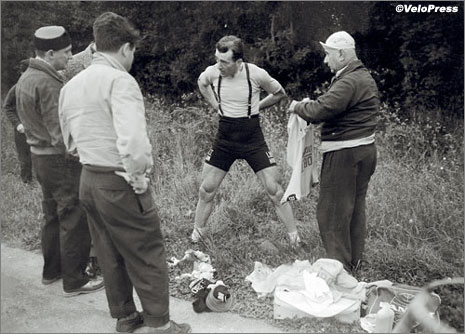 George Hincapie, to whom the classics have not been overly kind, once said that riding the one-day Paris-Roubaix race was as physically demanding as three weeks of the Tour de France. “The Spring Classics,” with its fascinating stories and insistent action photographs, captures the emotions of these intense races where, after all, there really is no tomorrow.

When not trying to forget that he fell off his bike in front of thousands of Belgians at the Tour of Flanders sportif event in 2002 when his chain slipped and he could not unclip on the Paterberg, Leslie Reissner may be found avoiding mud and cobblestones at www.tindonkey.com.
Like PEZ? Why not subscribe to our weekly newsletter to receive updates and reminders on what's cool in road cycling?