As a child I was mesmerized by wildlife documentaries, where photographers managed to capture the most extraordinary images. I particularly liked the ones of birds, showing them nesting, or feeding young, or in flight. Once I began to take pictures myself, a bit of study revealed that those marvellous pictures of loons on the lake took hard, hard effort as the poor sweating photographer sat for endless hours, bitten by mosquitoes but unable to move around much inside the blind for fear of disturbing his quarry…

The Peloton with photographs by Timm Kцlln

The result was a handful of film and a lot of failures that no child watching television would ever be aware existed. Capturing the animals in all their varied moods throughout the seasons must be a huge challenge and finding the right moment reveals all. Timm Kцlln’s magnificent book “the Peloton” represents the application of the same dedication and similar artistry. But here the wild animals are pro cyclists, familiar to most of us but perhaps less so than we think.

This is not your typical coffee table cycling photo book. After Page 7 there is not a single photo of a bicycle. Or a bicycle race. Or any landscapes. Or even, come to think of it, any colour. Every other page features a black-and-white portrait of a professional cyclist, a collection which has been described as the chronicle of a generation of riders. 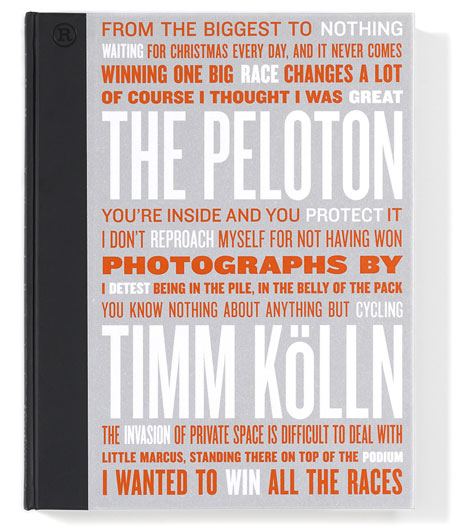 Timm Kцlln, a German photographer whose work is often featured in Rouleur magazine and in the excellent series of Photo Annuals from the same publishers, came up with a Big Novel Idea. In 2005 he began to cover all of the major European stage races and Grand Tours on the pro calendar, a project that took six years and over 70,000 kms of travel through nine countries. But rather than taking the traditional kind of race photos, he instead waylaid riders at the end of the race, put them in front of a neutral backdrop near the finish line and shot the riders just as they were. He captured 150 riders altogether and 96 are featured in this book.

With such a similar approach to each race and rider, one would imagine that there would be a degree of monotony with these portraits. But they are portraits in the truest sense and show everything: exhaustion, pain, apparent anger, resignation, disbelief, jauntiness, wary confidence and, of course, really, really bad helmet hair. Among the finest examples of the last is Pedro Horillo, whose career ended after a spectacular crash in the 2009 Giro, and who wrote a short and thoughtful commentary that opens the book. 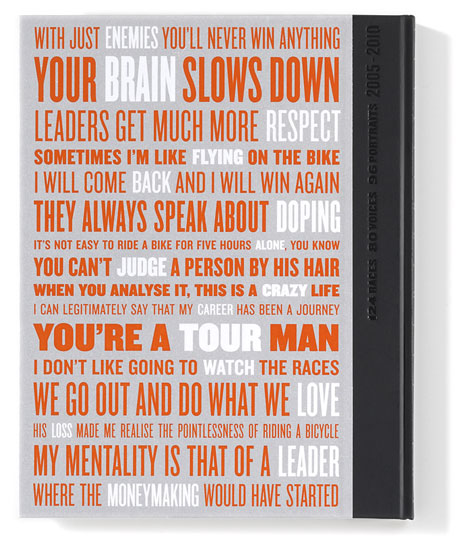 The photos, in most cases, are accompanied by a first-person narrative by the subject. After taking the photos, Timm Kцlln went back a second time, accompanied by an unnamed journalist, and interviewed the riders. I gather the journalist tidied up or edited the short pieces but they still have a sense of freshness. For many of the riders, they look so beaten up that it is hard to imagine they would have been able to be lucid enough to comment about anything intelligently on the spot.

It hard to pick favourites from this body of superb work. Although I am not sure I would want blow-up prints on my wall of some of them, I found myself returning over and over again to several portraits in particular. And in some cases the accompanying essays seemed even more revealing that the pictures.

Rolf Aldag of German appears on Page 14, photographed at the 2005 Vuelta while riding for Team T-Mobile. A strong support rider and an excellent Six Day racer, he looks like a prizefighter in Kцlln’s lens, his jaw positioned off-centre, his ears surprisingly prominent. His shoulders seem hunched up a bit, and the jersey does not sit straight. He is old at 37: the lines in his forehead and around his eyes are deep. Within a year he would switch to a management role and without the stress of racing the years would melt away but here he looks like a survivor. 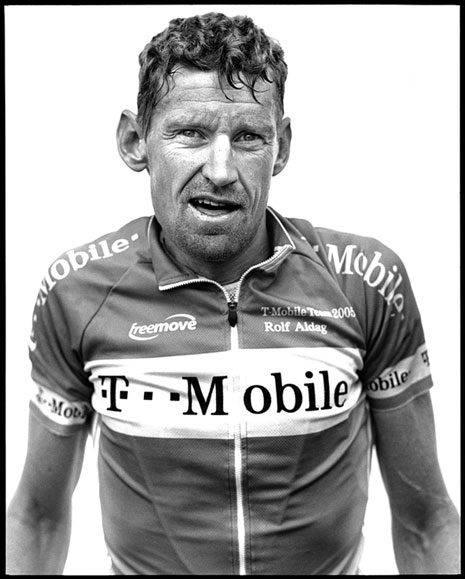 Another determined rider has to be Charles Wegelius, who turned pro in 2000 and retired this year. He looks unflinchingly at the camera, his lips tight, his narrow jaw in contrast to his wide forehead, a forehead that shows the imprint of his helmet still. The eyes are sharp and a bit hard, and reading the accompanying essay reveals that “Wegelius is regarded as one of the best, most selfless domestiques in the sport. He has never won a professional bike race.” Born in Finland, raised in Britain, he raced primarily for Italian teams but also for teams in Belgium and the United States. 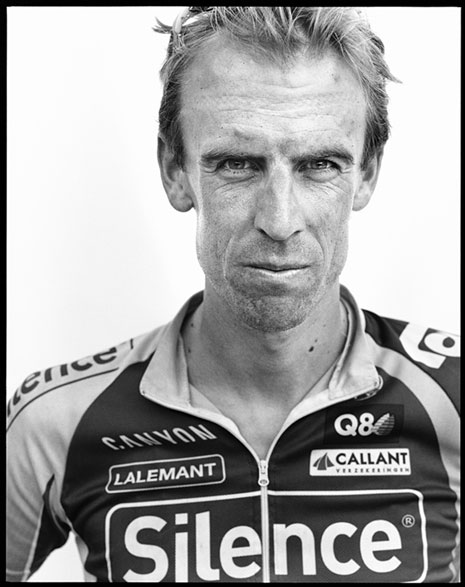 Another Team T-Mobile racer pictured is 22-year-old Mark Cavendish, who talks about his love for cycling and how he feels he unfairly comes across as arrogant because “no one asks what you’re bad at.” The photo is a year before he began his string of extraordinary sprint wins in consecutive Tours de France and he looks up towards the photographer, his face covered with dust except for the area where his sunglasses were. His eyes are tired but there is an expression on his face, around his lips–a smirk?–that suggests a bit of the know-it-all. Or is that simply in the eye of the beholder? Is the photographer directing us to an opinion? 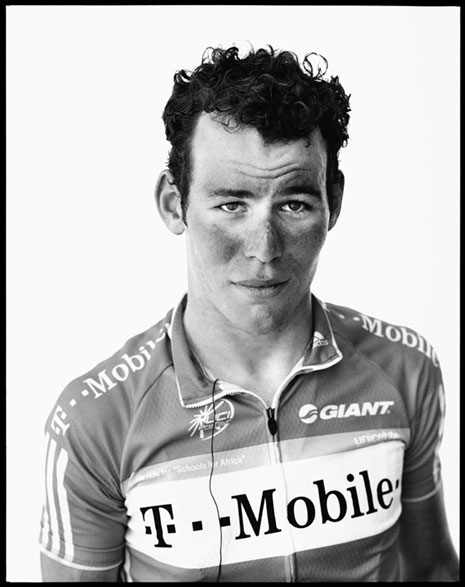 Vladimir Karpets, who claims he wants to be considered as a normal person as opposed to a sportsman tougher than anyone else, someone who can endure much more pain and suffering, looks as if he is about to hit someone. 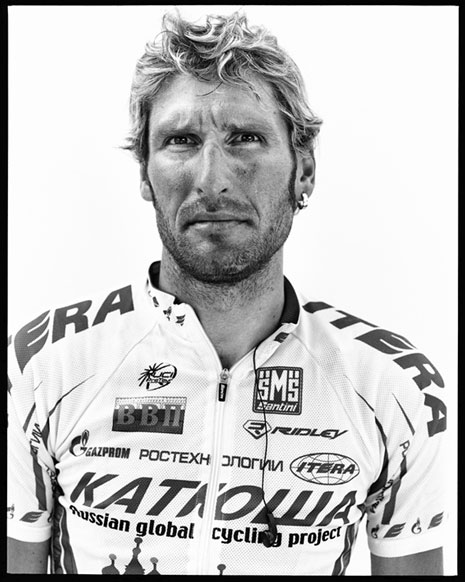 Alessandro Petacchi looks pensive and, well, kind of soft at the 2009 Giro, not the beaming Ale-Jet that fans were so used to. He reflects on doping controls and the need for constant availability to testers. Although cleared of intentional doping by the Court of Arbitration for Sport, he was fired by his team in 2007 but returned for a successful twilight career as the rider with the most Pro Tour wins in 2010. 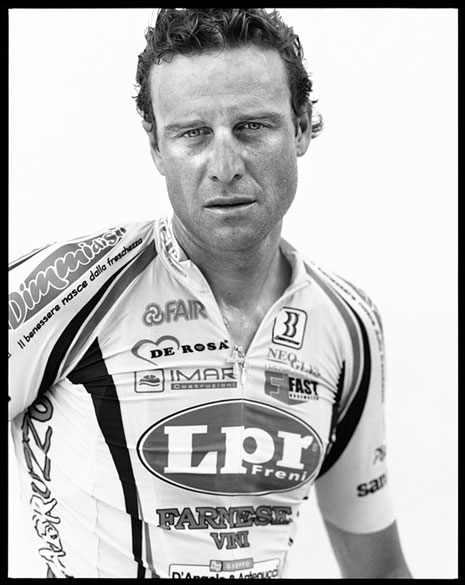 Anyone who denies that doping has been prevalent in pro racing needs only leaf through this book to be disabused of that notion. The number of riders who have had doping convictions, who have retired or made unsuccessful returns after suspensions, or, like Jan Ullrich, simply have a cloud over them is surprisingly high in such a comparatively small sampling of pros. Many do date their careers to the scandals of the Festina period but there are younger riders as well. Some admit to mistakes, some are more ambivalent. Leonardo Piepoli who, with teammate Ricardo Ricco, used performance-enhancing drugs at Team Saunier-Duval, admits to doping but tries to rationalize it by saying later in his career he was not a chronic doper.

Some photos are hilarious: Fabian Cancellara as some kind of Swiss Rastaman; the superbly dirty Florent Brad looking extraterrestrial at Paris-Roubaix; Andy Schleck all pouty, a Luxembourg teen idol. But then there are photos that are much more nuanced and the stories with them are different too.

Marzio Bruseghin, an iron rider if there ever was one having ridden all three Grand Tours in 2008, with a podium finish at the Giro and Top Ten in the Vuelta, has emerged from the role of domestique to team leadership. His portrait shows a friendly, open, somewhat quizzical face. But what is striking are his views about cycling. As a child he “absolutely didn’t like cycling at all.” He does not enjoy watching races either. “I can’t enjoy it because it makes me sad to see people suffering. I’m not capable of encouraging them to suffer more. It’s just not logical to me.” While recognizing the benefits it has given him, he describes the life of the pro cyclist as one where “you have the opportunity to live the young crazy life but you miss that stage of life where you grow old little by little. For some it can be traumatic. It’s like wheat when it’s very hot. It grows very quickly, matures straight away but the husk doesn’t have any grain–it’s empty.” 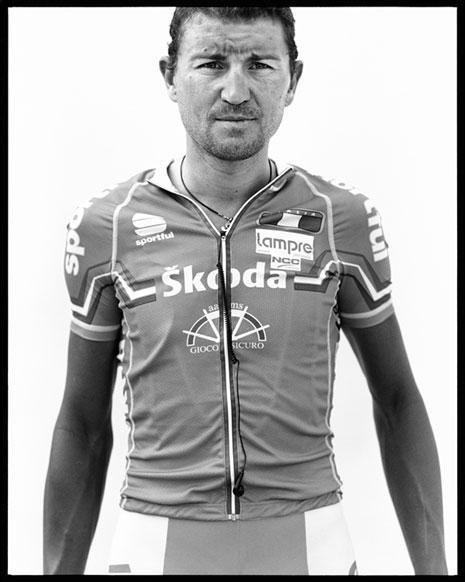 The peloton is the mass of riders that make up the natural state of a bike race. Some riders escape, some go off the back. This book, produced to Rouleur’s usual very high standards in presentation, binding and print, is about the individuals, the atoms, that make up that structure. Each is very different, not only in appearance and temperament, but in how they view their own sport.

In his introduction to “the Peloton,” Rouleur editor Guy Andrews writes about Timm Kцlln in this way: “…I noted, not for the first time, that he has an unbridled ability to wait for what he wants. Waiting patiently has become a regular pastime for Timm Kцlln.” He has clearly had the patience of those wildlife photographers to get that perfect shot, that moment of revelation, fixed forever on paper and in our mind’s eye. This is noble and archaic photography. Kodak doesn’t even make the film Kцlln used anymore.

Expensive, yes, but a unique and beautiful book that will bring pleasure to anyone who owns it.

Check out Timm’s website – it’s well worth the visit.

When not running his fingers through his fetchingly tousled helmet hair, Leslie Reissner may be found being grateful that, unlike Marzio Bruseghin, he is not nicknamed “the Flying Donkey” at www.tindonkey.com
Like PEZ? Why not subscribe to our weekly newsletter to receive updates and reminders on what's cool in road cycling?