PEZ Bookshelf: We Roll From a Land Down Under

Book Review: The phenomena that is the bicycle quickly spread around the world as the first practical machines appeared in the 19th Century and from its origins in Europe moved quickly first to the United States and then to the frontiers of civilization. It seems every industrial country had its own little manufacturing community assembling two-wheelers and, soon enough, people were racing those same bicycles. From Australia we have another in the series of quality picture books from Image Publishing and this one goes back in time to show the history of the bicycle but with a focus on Australia itself. 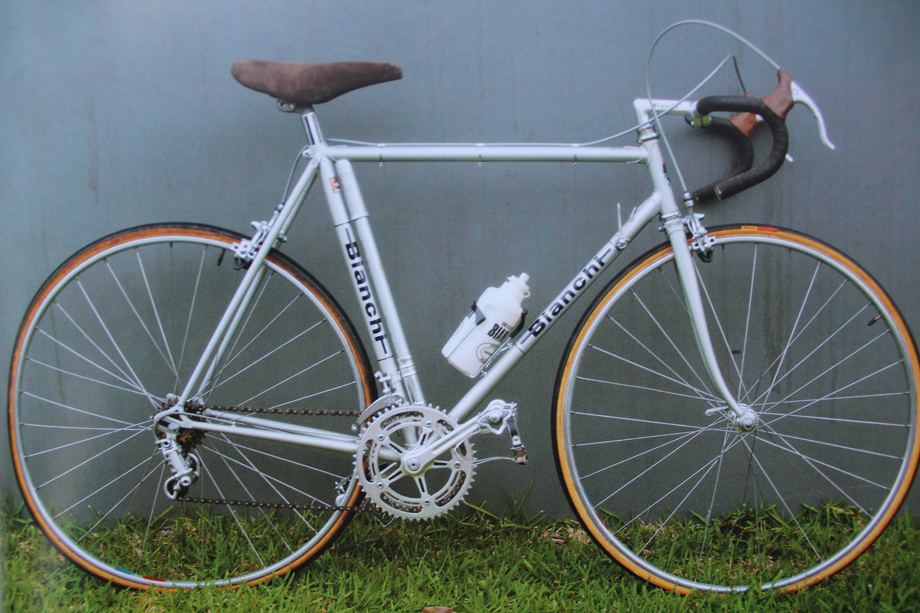 Australia: you think of the endless Outback and red dirt roads and the lonely swagman looking off to the horizon standing next to his overloaded bicycle and it is always 1953. Not so! That beautiful photograph by Alex Poignant in the National Gallery of Australia aside, the Lucky Country has a long and impressive bike racing history. “Racing Bicycles: 100 Years of Steel” by David Rapley captures some of the excitement of what it must have been like out on the frontiers of Empire as those doughty pioneers not only took to the roads at home but found success in Europe long before Cadel Evans at the Tour de France. 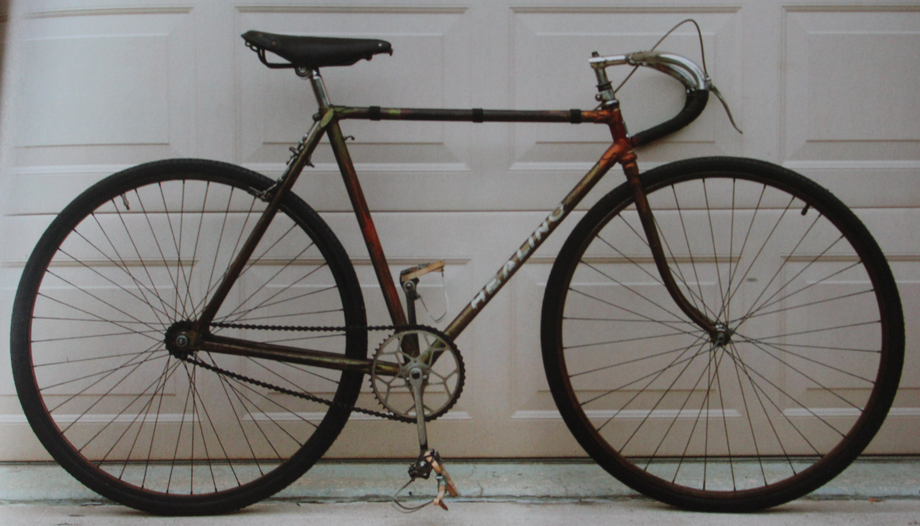 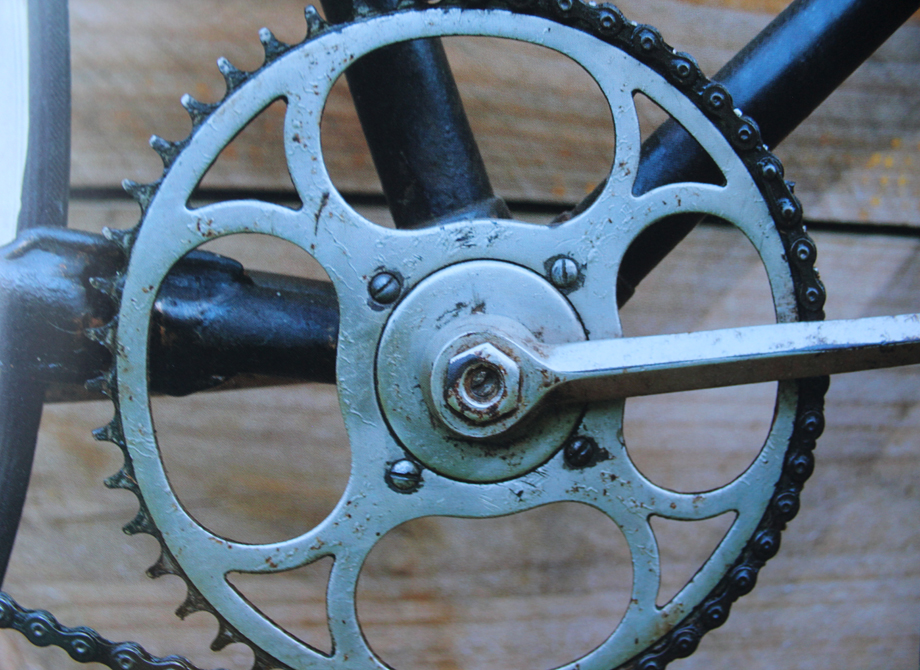 The book features, in chronological order from 1902, bicycles from private collections in Australia. It begins with a gorgeous Rambler shaft-drive built in Chicago but many of the bicycles presented in its 236 pages are of Australian origin (and there are even several aluminum bicycles that managed to slip in!). The photographs, by Susie Latham, are excellent with fine colour reproduction and often focused lovingly on the details that make the bicycles stand apart from each other. To non-specialists a lot of steel racing bicycles look pretty similar except for paint schemes: they all have drop handlebars, thin steel tubing, narrow leather saddles. Many in the book are fixed-gear or track bicycles. But the commentary the accompanying text brings to life the stories behind obscure brands that are probably forgotten in Australia now, let alone the greater world. 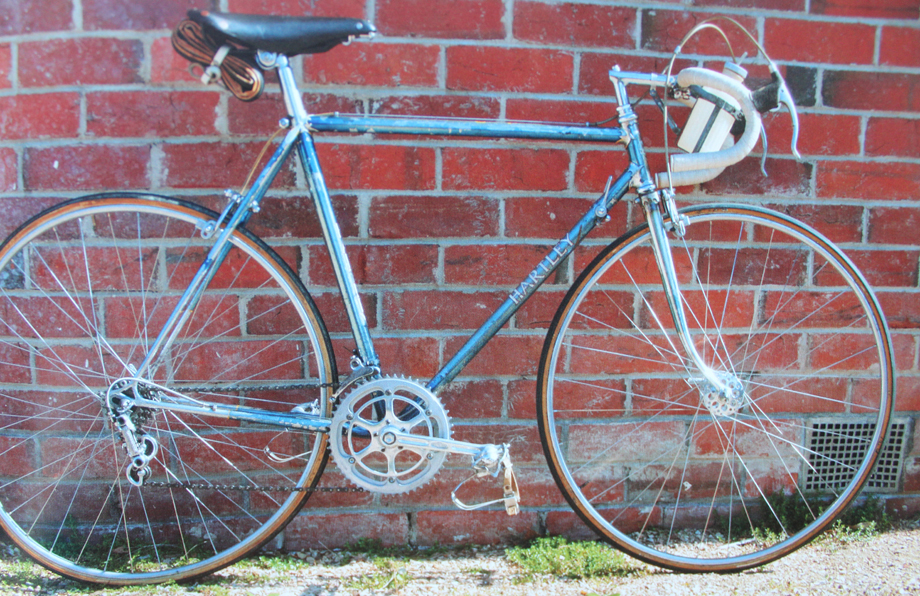 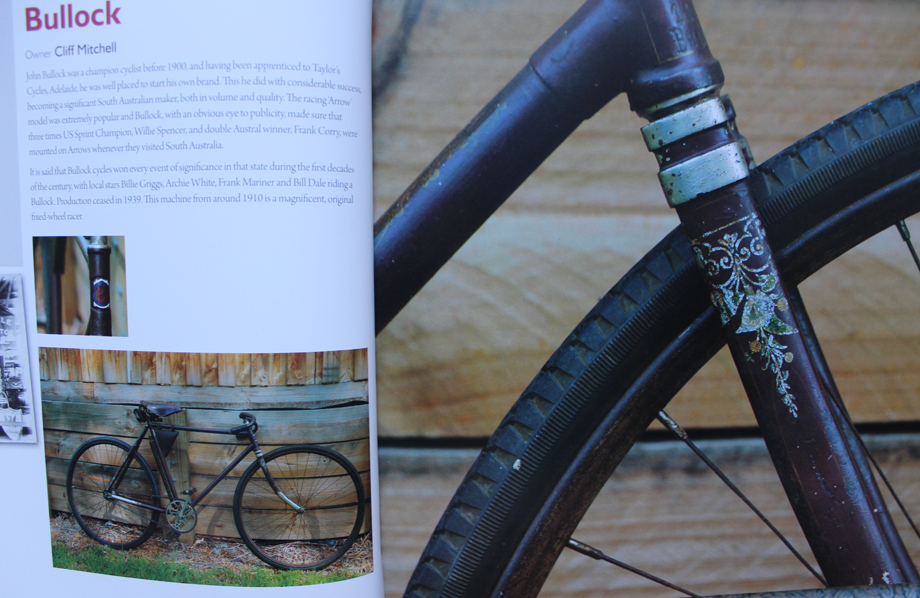 Names like Bullock (out of production in 1939), Ixion, Neville, Webster, the Olive, Rossmore, Carbine, Healing, Speedwell…for the vintage bicycle enthusiast it is truly the New World. But one brand appears very often in the book and has many important associations with Australian racing. This is Malvern Star, founded in Melbourne in 1902 by Tom Finnegan with his winning from the 1898 Austral Road Race. The brand still exists although no bicycles have been built by the company in Australia since 1987. Its logo, a six-pointed star, matched a tattoo on Finnegan’s forearm. 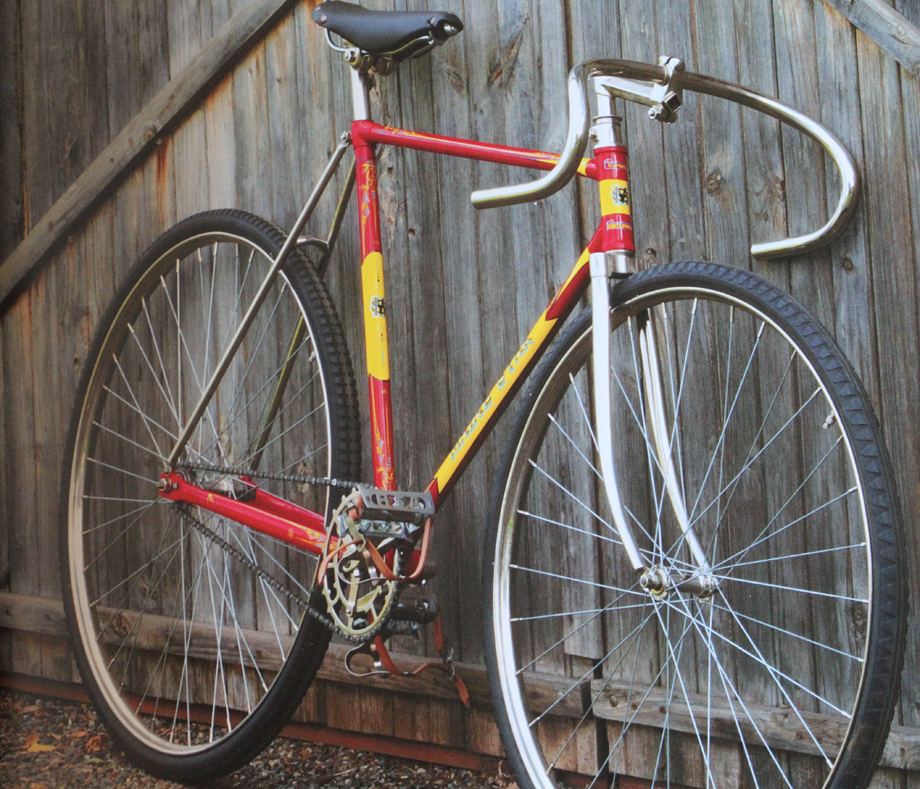 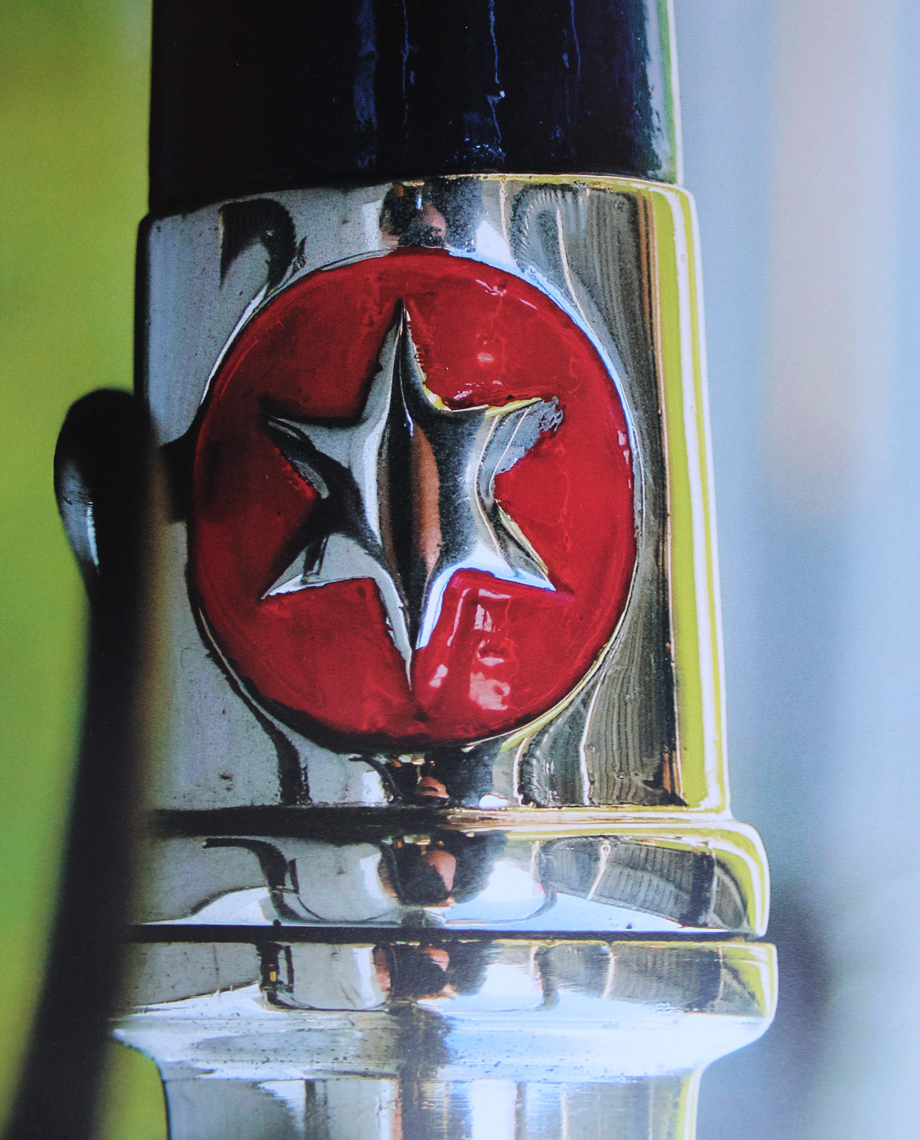 In 1921 the company began a long relationship with young Hubert Opperman, a legend in cycling. He was part of the team of three Australians and a New Zealander who competed at the 1928 Tour de France. At its post-World War 2 peak the company had 115 stores with 1,000 dealers, making it and Opperman household names in the country. Oddly, Opperman’s reputation is not in road racing success but rather in long-distance record-setting where Malvern Star’s publicity machine milked every possibility in its marketing. The first Australians were at the Tour in 1914 but it took until 2011 for one of their countrymen to win it. 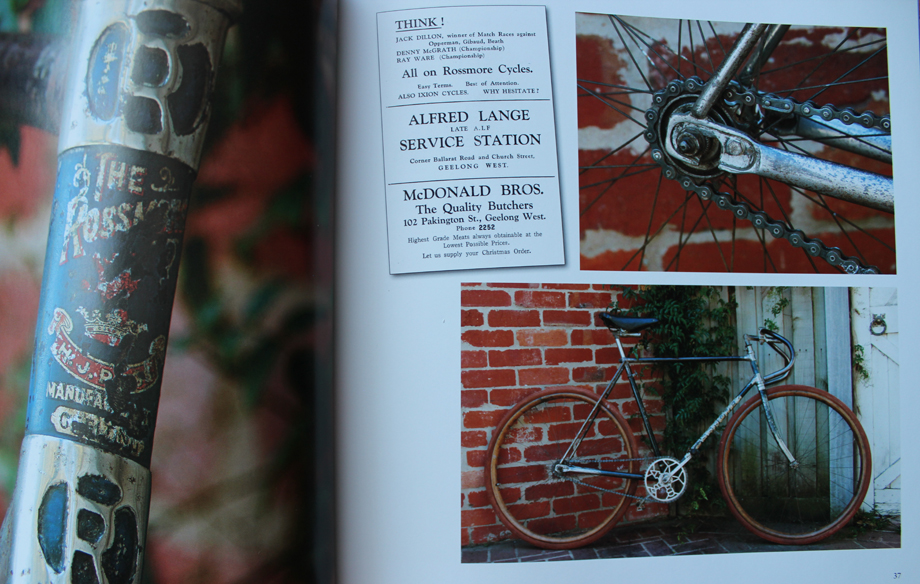 Malvern Stars were ridden by other notable racers, including Sid Patterson, winner of a number of Pro World Championship titles on the track in the early 1950s and in whose memory, along with that of the ill-starred Russell Mockridge, the book is dedicated. Mockridge (nicknamed “Little Lord Fauntleroy” for his posh accent at one point) became famous as the Geelong Flyer and was considered Australia’s greatest all-around rider. After he humiliated the professionals—notably Reg Harris–as an amateur in the Paris sprints of 1952, amateurs were banned from the event for many years afterwards. Sadly, Mockbridge was to die aged 30 in a collision with a bus during a race. 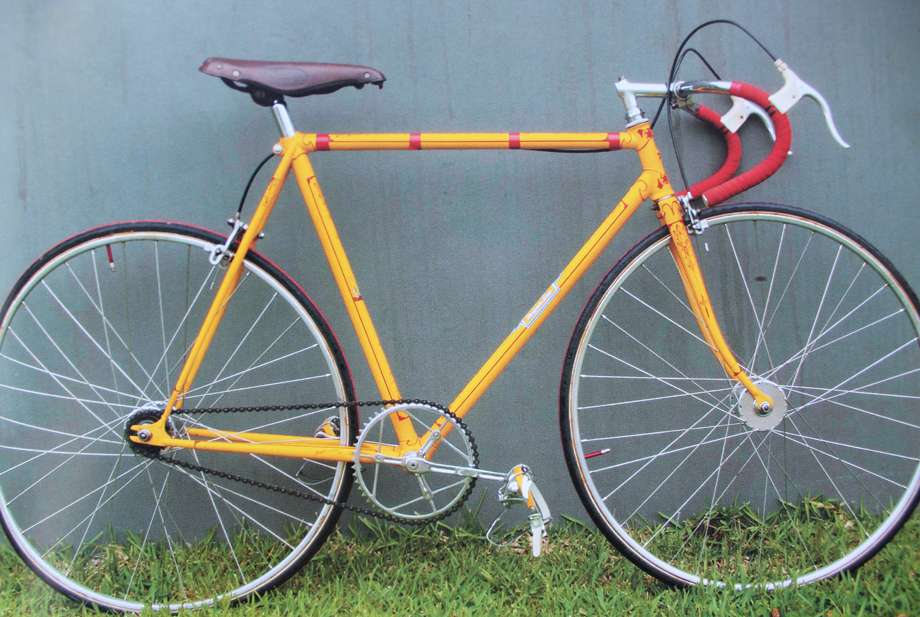 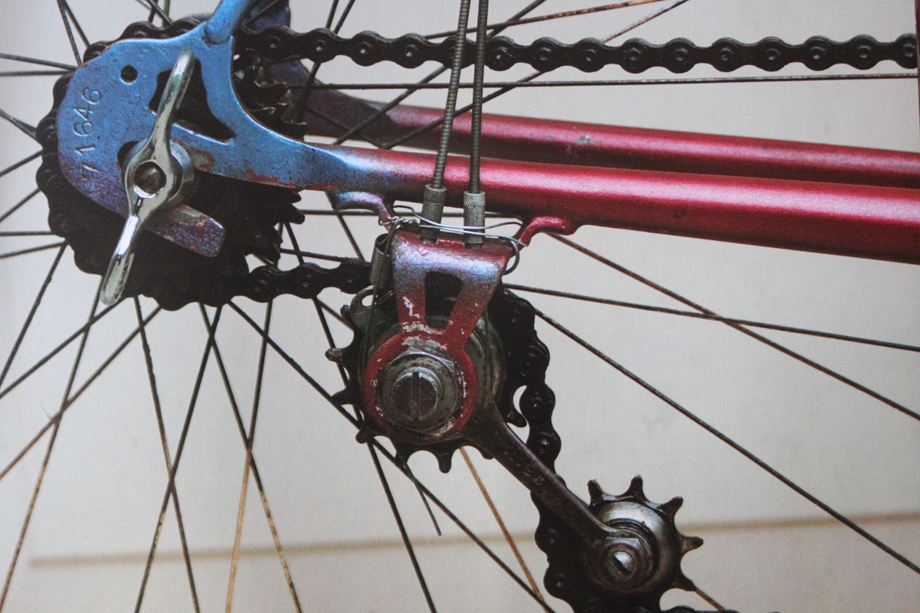 In addition to the many domestic bicycles the book includes a good selection of better-known marques that would take pride of place in any collection, including Bianchi, Ganna, Cinelli, Legnano, Olmo and a weird Paris Galibier, which is English in spite of the name. An Italian brand that is today little-known, Cicli Romeo, is represented by a lovely 1938 model in pristine condition and featuring the odd-looking Vittoria Margherita gear change system. Even better is that the current owner’s surname is Romeo! 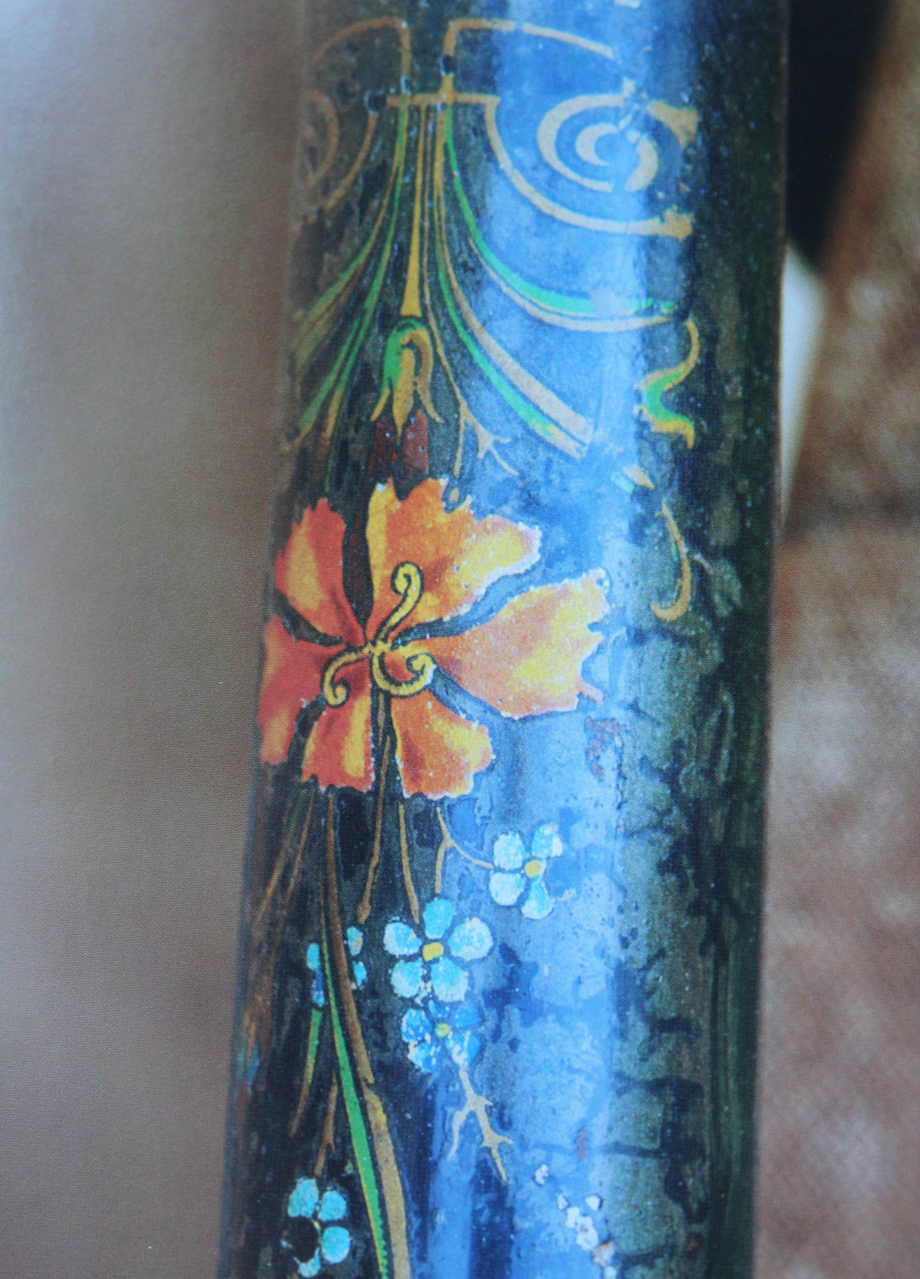 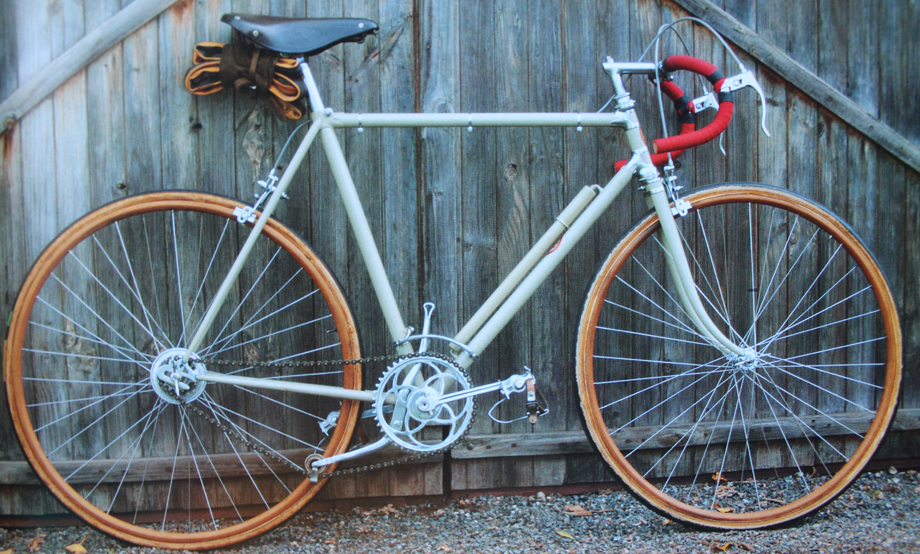 In addition to the history of the bicycle or its manufacturer or noted racer, each section contains a box with details of the machine, including its condition, serial number, special features and component details. Many of the bicycles are in excellent original condition, with some good restorations but a few mirror the trend in today’s antique car market for total original patina, even if this means shredded tires and rusty frames. Although I understand the reason for this trend and that a bicycle is original only once (and restorers find it invaluable to be able to compare their projects to an original) it is a bit sad that the bicycle cannot be used anymore on the open road. 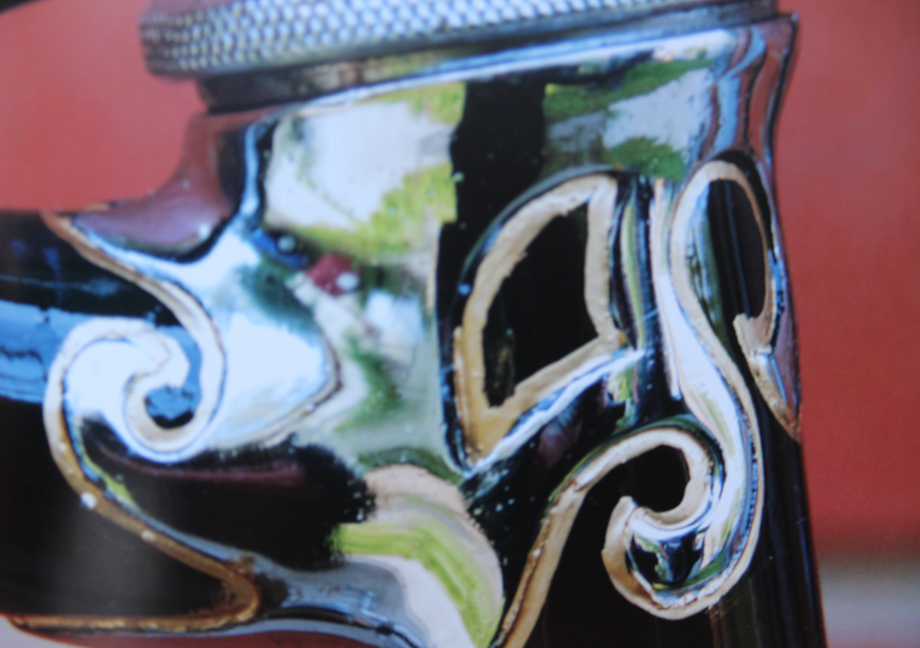 “Racing Bicycles: 100 Years of Steel” certainly would appeal to any bicycle collector looking for a different perspective but is also inspirational for those keen on retro-rides like l’Eroica (now gone global with editions around the world), the Retro-Ronde in Flanders or Anjou Velo Vintage in France. There was apparently a vintage bike event in Australia in memory of the Geelong Flyer but the author hopes that the book will encourage the survival of these fine machines, noting “the historic racing bicycle scene in Australia is in a delicate and in some ways fledgeling state. Despite more than a hundred years of a rich history of racing and the current popularity of the sport—and cycling in general—no formal organisation exists to preserve, appreciate and exercise these machines and tell their stories.” Mr. Rapley goes on to note that the fixie fad has taken a toll on the remaining population of track frames and there is a lot of misguided restoration happening. Ancient bicycles (the high-wheelers of yore) have their fans and societies and there is an interest in sporting figures of the past but little interest in racing bicycles of the 1950s onwards. 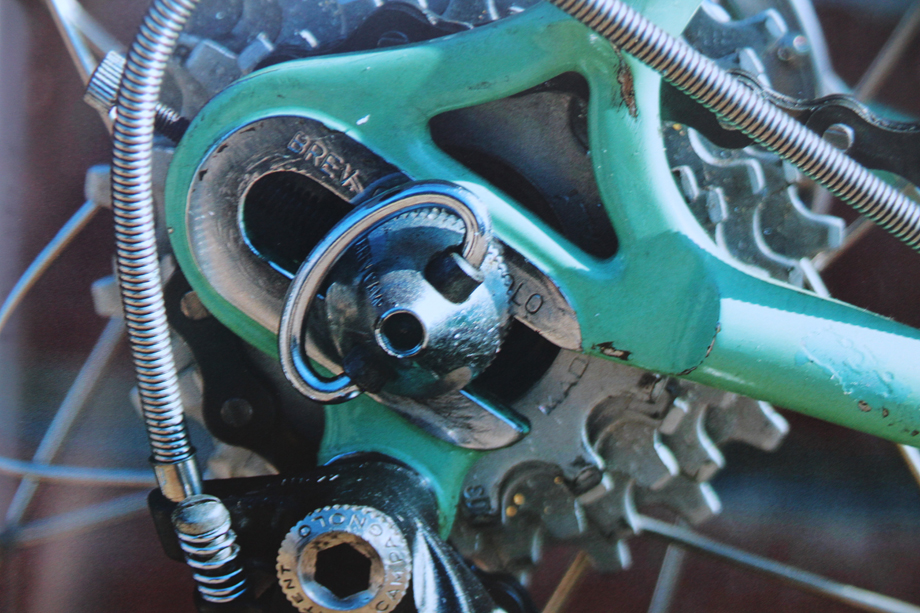 Events such as the retro-rides mentioned have had a huge impact on interest in vintage racing bicycles in Europe, where values have shot up over the decade but given the publication of “Racing Bicycles” was in 2012 it is hoped that the situation has improved in Australia. With L’Eroica’s California edition and the Gran Fondo New York’s offering of a vintage class (sadly, without allowing wool jerseys) it appears that the retro-ride idea is spreading wherever keepers of classic road machines want to get them on the open road, the place they deserve to be. 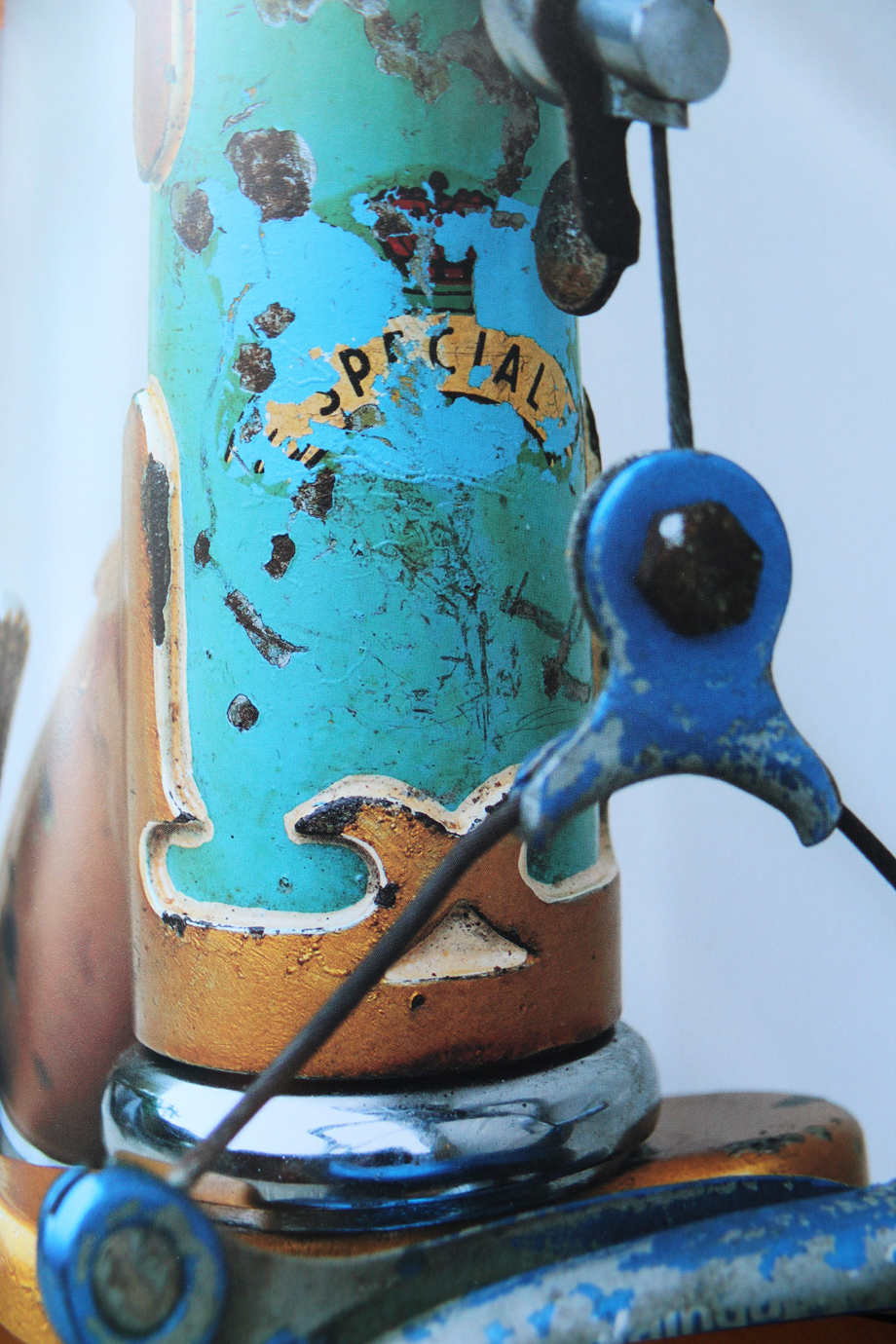 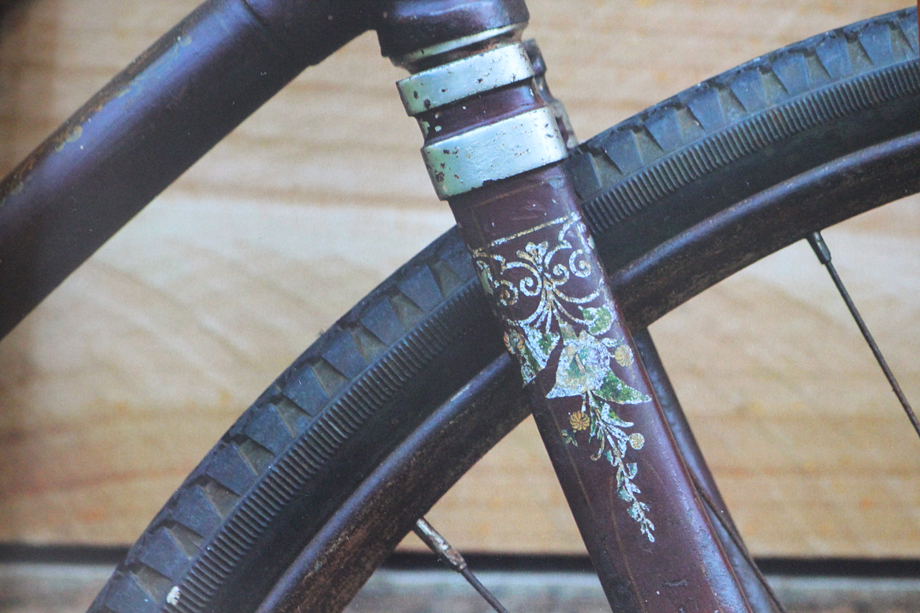 Hubert Opperman became a huge and beloved celebrity in France. He went on from cycling to a political career at home and a very long life. At 90 years of age his wife forbid him to go cycling in traffic. In 1996 he passed away while on an indoor exercise bicycle, aged 91, and probably wishing he could be out on his Malvern Star, breaking the Sydney to Melbourne record yet again. “Racing Bicycles: 100 Years of Steel” brings much to life including the prestigious Warnambool event, once with a handicap system to encourage all the riders in an unassisted scratch race. Judging from these lovingly photographed sleek and elemental racing bicycles we all share an enthusiasm, whichever continent it might be on. 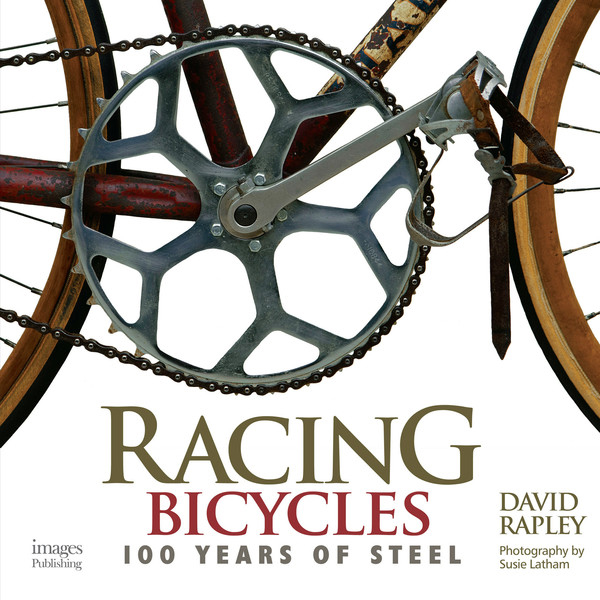 All photots by Susie Latham.

When not quietly rusting away, Leslie Reissner may be found planning his next vintage bicycle ride at www.tindonkey.com
Like PEZ? Why not subscribe to our weekly newsletter to receive updates and reminders on what's cool in road cycling?