Vienna conjures up images of schnitzel, strudel and Johann Strauss waltzes but a book from a tradition-rich publishing house in the Austrian capital reveals another aspect of the city now nearly forgotten: the construction of bicycles, often in tiny workshops and to a surprisingly high technical and aesthetic standard. The book “Wiener Mechanikerräder 1930-1980” confirms its authors’ contention that “Vienna is big but the range of its bicycle manufacturers was once even bigger.” 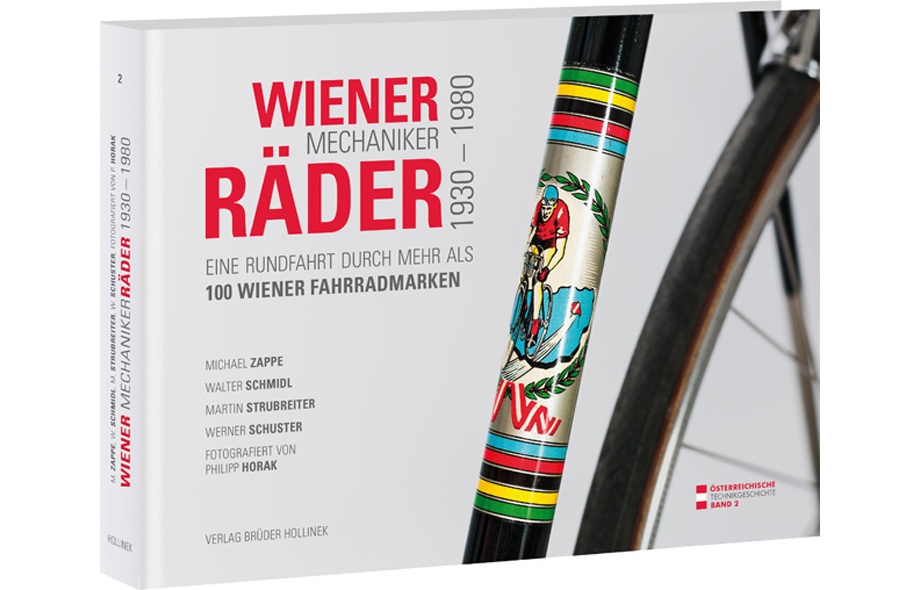 In 1930 Vienna had more than 100 makes of bicycle and for the next half-century brands would come and go. The marques in this book, teutonically organized from “Alpenrad” to “Ziel” by the four (!) authors, have been painstakingly researched and the heading of each chapter indicates when the company existed, who owned it, how long the brand was in production, the location of the workshop, whether the firm produced its own bikes or brought in bikes under its own name from elsewhere and sources of information. The effort to uncover all of these things must have been daunting and indicative of the fanatical obsession of collectors of which the authors are representative. One of them owns 85 racing bikes. Reference is made to the “tide of bikes” occupying basements and that during research for the book the authors managed to accumulate 16 more bicycles and eight frames! 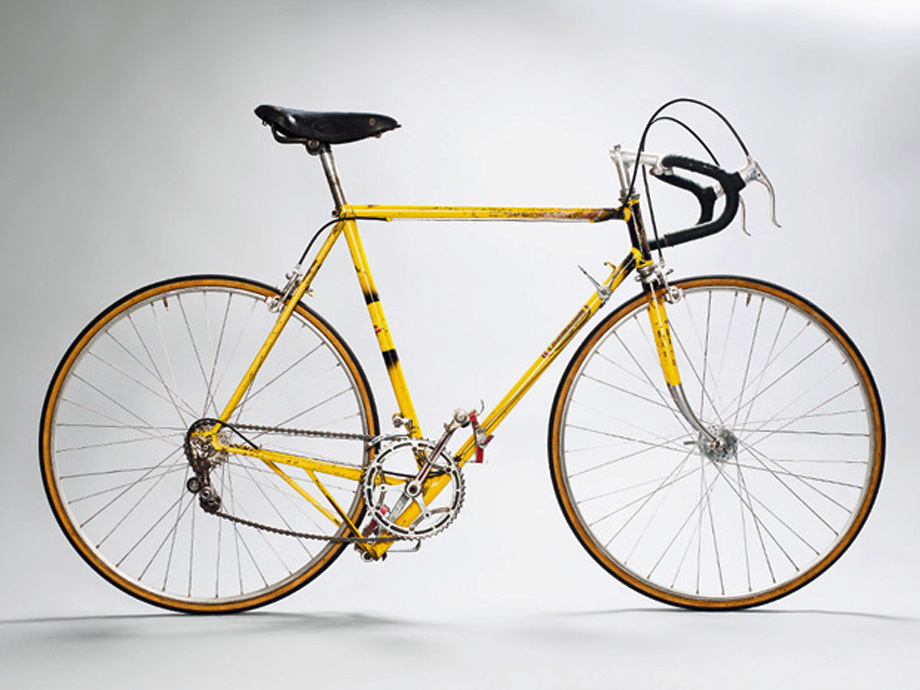 From the number of brands it seems as if pretty much every Viennese bicycle shop must have had its own production as the beautifully-produced volume is over 350 pages in length. This is understandable perhaps as in the Age of Steel building up a bike was a fairly straightforward tube-brazing operation with components coming from a few large suppliers. In the winter months the shops could be occupied with production for the coming year. However, the imaginative Austrians were not limited in their cycling vision and some of the bikes featured here have aluminum lugs screwed into lightweight steel tubes or aerodynamically-shaped tubing or even a leaf spring suspended frame. There were folding bikes and aluminum children’s bikes and bicycles with jewel-like paint finishes. It is proper that this book is Volume 2 in the series “Austrian Technical History.” 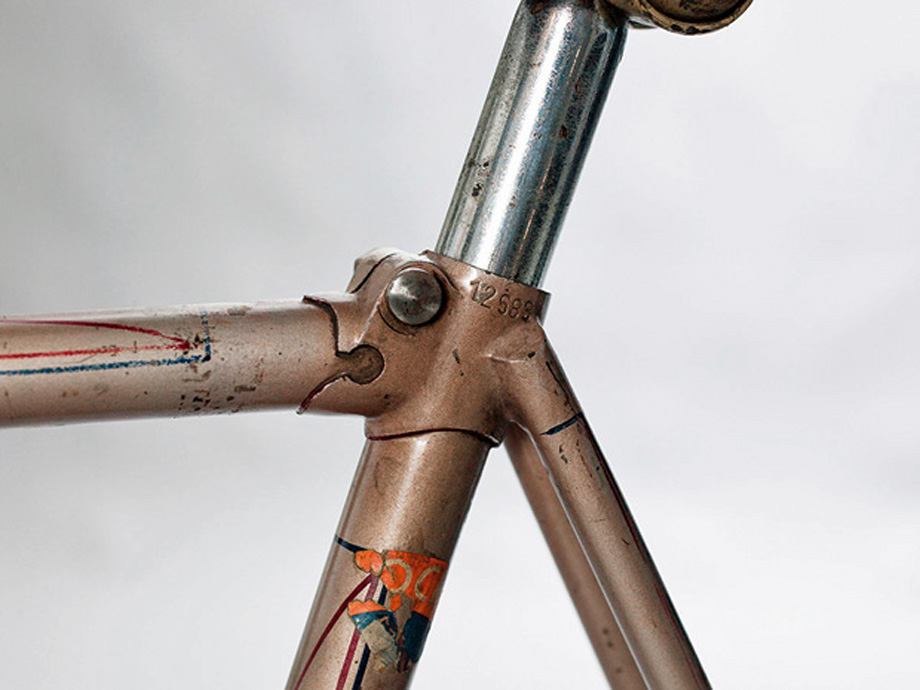 The book is packed with great photos of technical innovations… 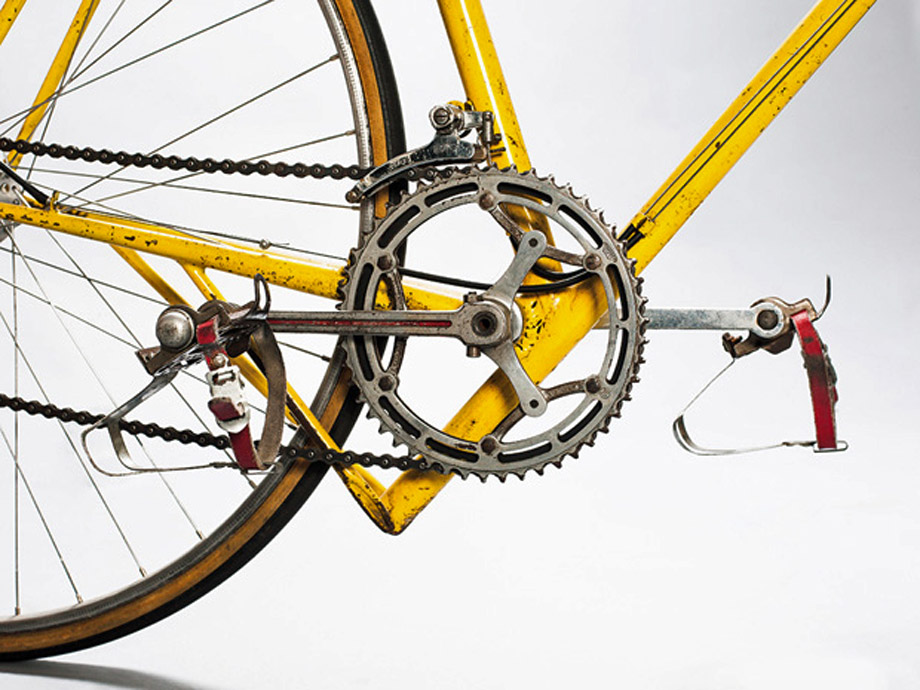 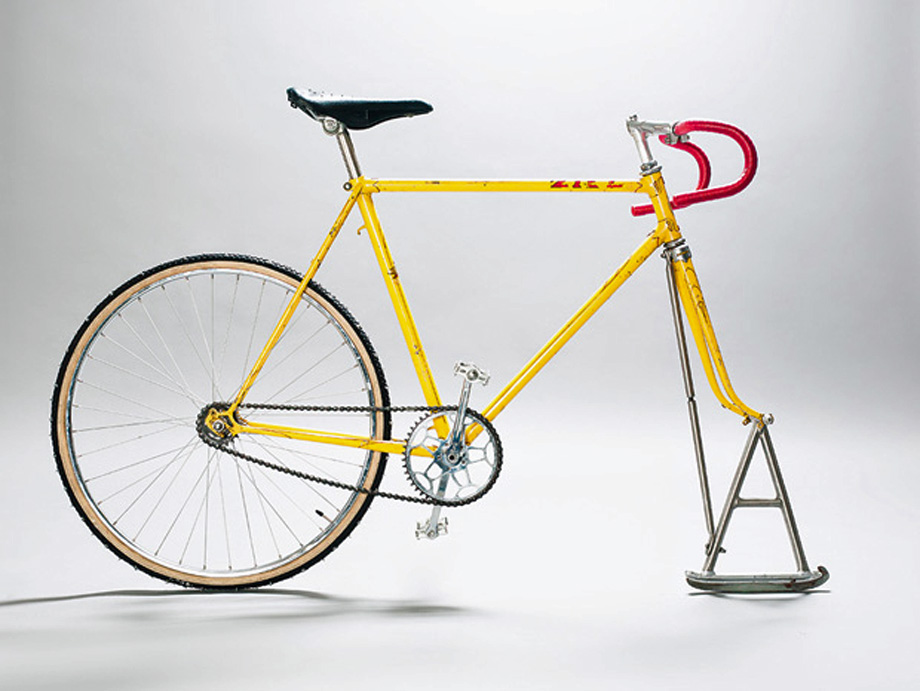 And there’s even room for some bikes which are truly bizarre.

“Wiener Mechanikerfahräder” has a charming, personal touch to it, perhaps because the companies and framebuilders really were so individual. One is struck by the brand names. Some, such as “Williams,” “the Champ,” “Sussex” or “Champion” were meant to convince buyers that they perhaps reflected the glory of English manufacturers. But a larger group used the names of the builders, usually taking the first two initials of the first and last names. Hence: BBW (Bruno Beranke Wien); Capo (Otto Cap); Elan (Eduard Lachnit); Er-We (Eduard Reininger); FAB (Fahrradhaus Adolf Blum); FH (Franz Hrabalek); Frado (Franz Dorfinger); Frigo (Friedrich Gollerstepper); Friha (Friedrich Hamedl); Geoga (Georg Gartner); Igro (Josef Grosstab); JoWi (Josef Wilfing); Mipf (Michael Pfeiffer); and so forth.

In addition to the racing bicycles one would expect to find there are plenty of ladies road bikes, the odd bike used for indoor ball games and some very cool children’s bikes, including one that could alternatively be used as a scooter. Some of the companies offered a wide product line. The producers of the “Select” brand, which made its own bicycles from 1947 until at least the 1980s, offered track and road bikes of excellent quality and the book features thirteen of them, including a remarkable bike meant for mountain road racing and built with a split seat tube to allow a very short wheelbase by moving the rear wheel forward, an idea taken up in these later times of composites by others using curved seat tubes. “Select” enjoy the services of a virtuoso framebuilder, Michael Steinkellner, whose “S” initial was placed on the seatstays. 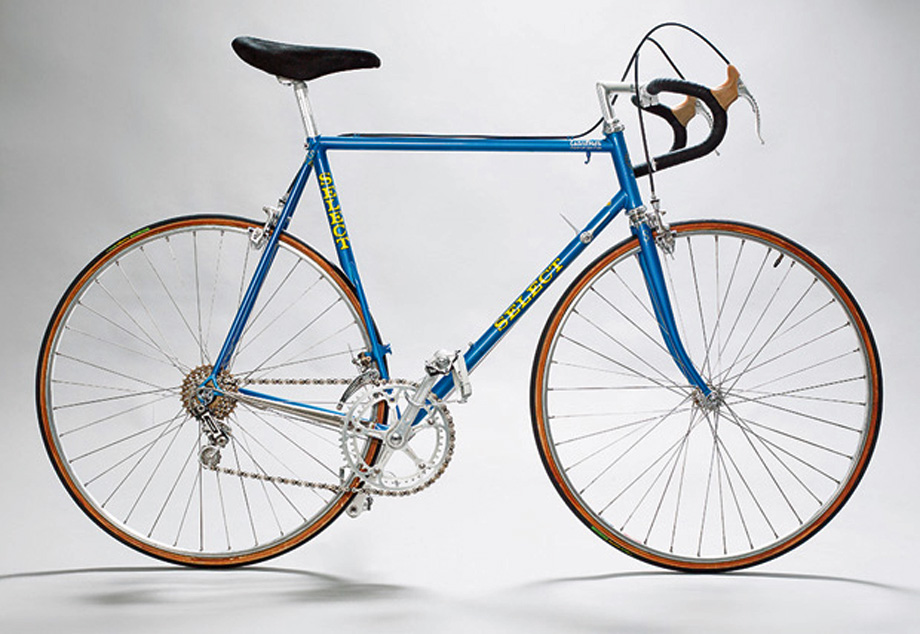 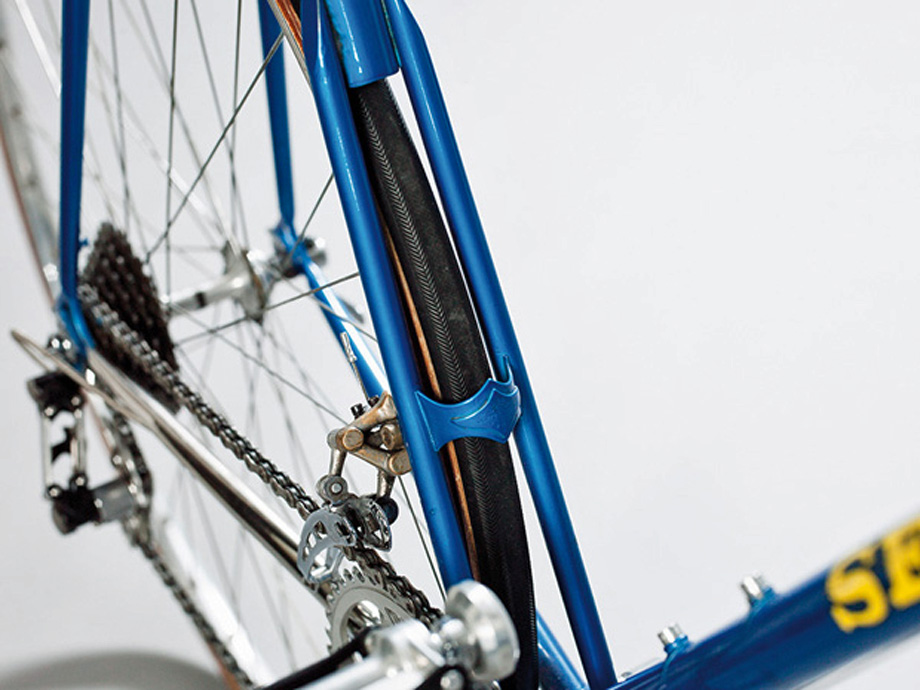 In addition to the excellent full colour photographs of Philipp Horak there are vintage black-and-white photos showing the cycling scene in Vienna in the period covered in the book, with lots of local race meets and local heroes. The accompanying text is quite interesting as well and often reveals the sly humour of the Viennese. If you don’t read German you will miss that but the quality of the book and the wealth of photos certainly obviates the need to go for language classes. 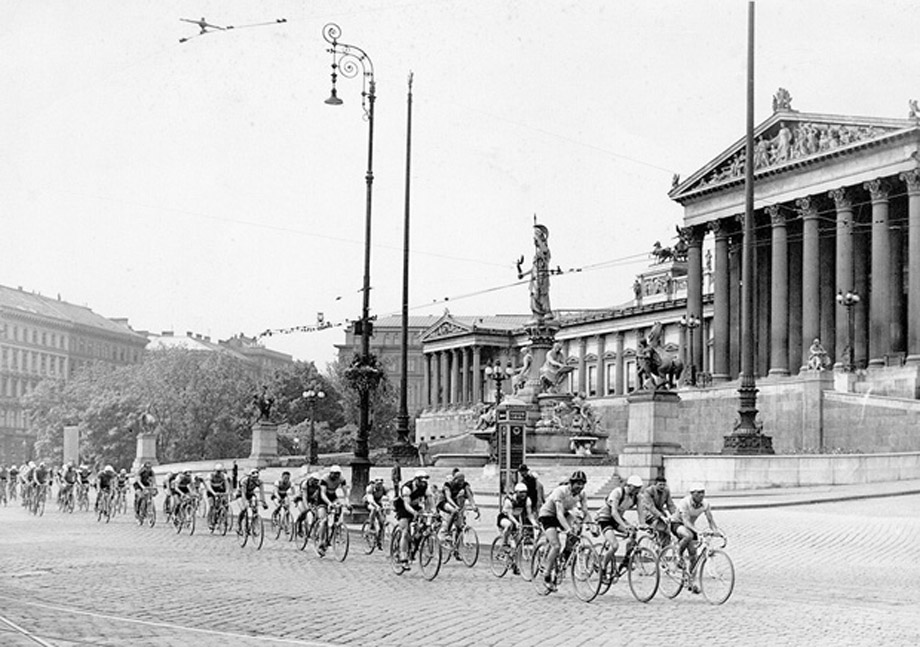 The old bike hobby is a niche within the greater cycling community, which in itself (at least as far as racing bicycles go) is simply a larger niche. Upon learning of this book I thought that this must be the most obscure topic that anyone could write about (and I own three books on the history of variable gearing). French, Italian and English builders have had global fame but, as the book admits, the brands highlighted here were “world-famous in Vienna.” The book is of very high quality and not inexpensive but the publisher has told us that more than half of the print run of “Wiener Mechanikerfahräder” had been sold in the first year year. 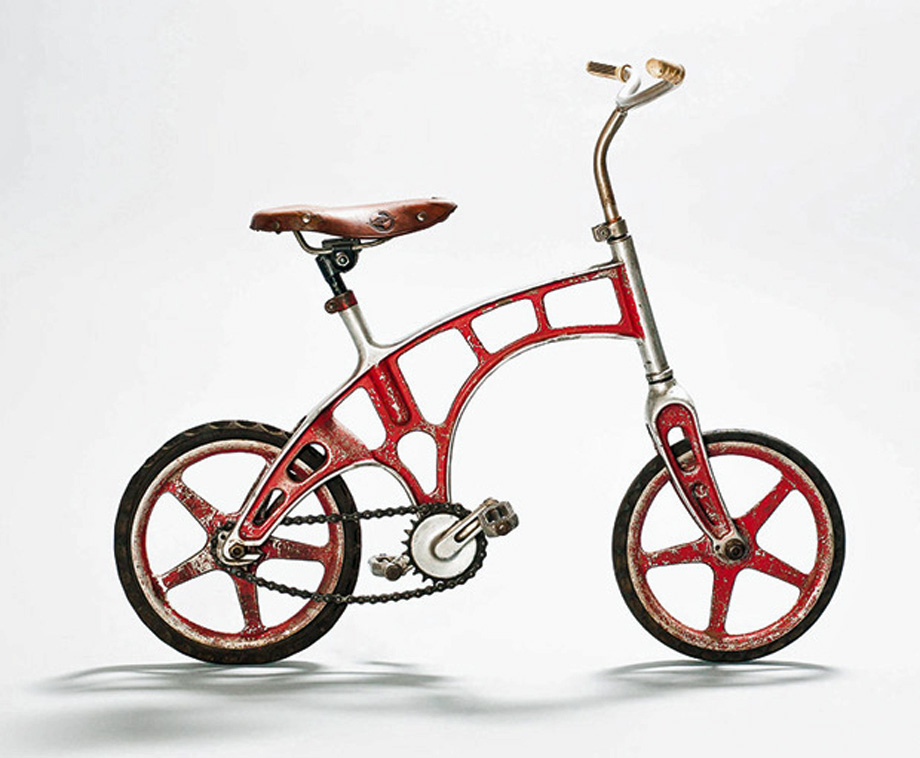 The subtext of the book is “From Zero to One Hundred to Zero.” Of the 100 different brands described in the book only one company, Capo, still exists. Yet there is hope as there is a brief chapter on the brave few framebuilders who are working in Vienna today, including Peter Gross although another, Hans Pöllhuber, who operates a store and workshop, has given up framebuilding himself as uneconomic.

Many of the builders and brands in the book are known only from a single frame and the authors present a number of mystery frames they have found and invite readers to send them any information about them they might have. Another personal touch. 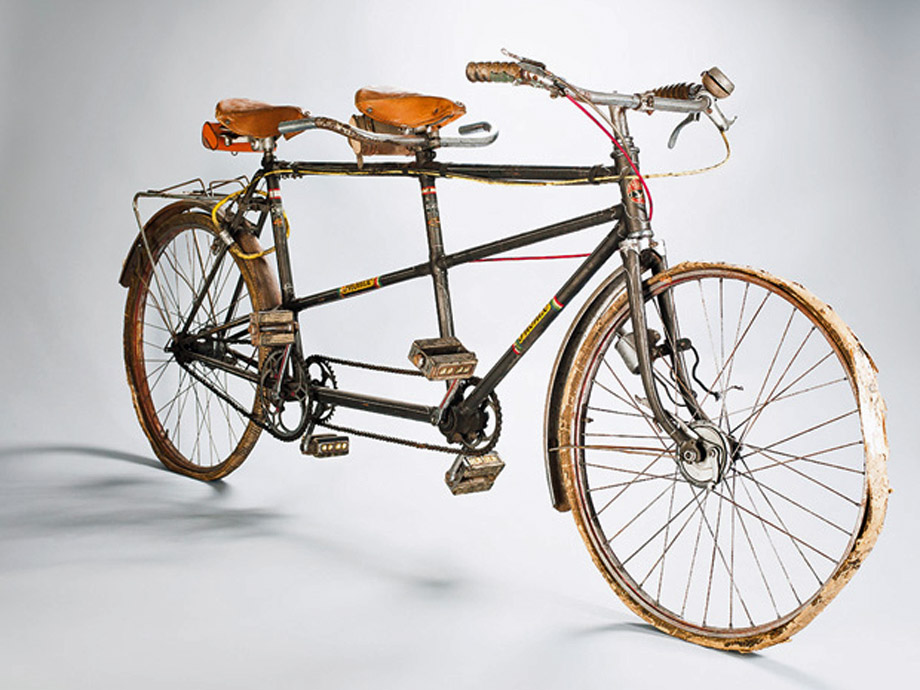 “Wiener Mechanikerfahräder 1930-1980” might be about an obscure era to anyone outside of Vienna but this book is a true labour of love and a source of great entertainment if you like old bicycles and want to dip into a different world around them. “World-famous in Vienna” deserves to be just world-famous and would make an excellent gift, ideal for browsing through on those long winter evenings while enjoying a Café Melange mit Schlagobers. 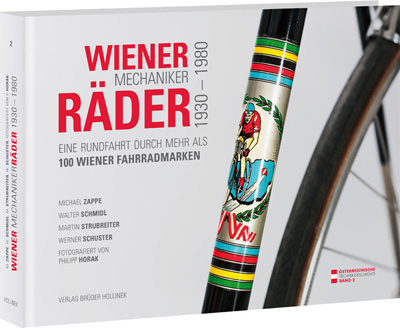 For more information and to order the book: https://www.hollinek.at/.

When not consuming never-enough coffee with whipped cream, Leslie Reissner may be found planning his participation in the 2014 Viennese wine district retro-ride “In Velo Veritas” at www.tindonkey.com