Nicknamed “the Lucky Country,” Australia, once deemed primarily suitable as a dumping-off place for convicts, is in fact a stunningly beautiful land whose modern-day inhabitants enjoy a very fine quality of life. Its wild countryside and unique flora and fauna have attracted explorers and adventurers but with its parched interior, tropically-hot Northern Territory, and the vast treeless limestone plateau that is the Nullabor Plain in the south, coupled with brushfires, a lack of roads, dangerous snakes and limited settlements, cycling around it takes a special dedication. Some of the brave and/or eccentric souls who did are the subjects of a new book by Daniel Oakman, “Wild Ride.” 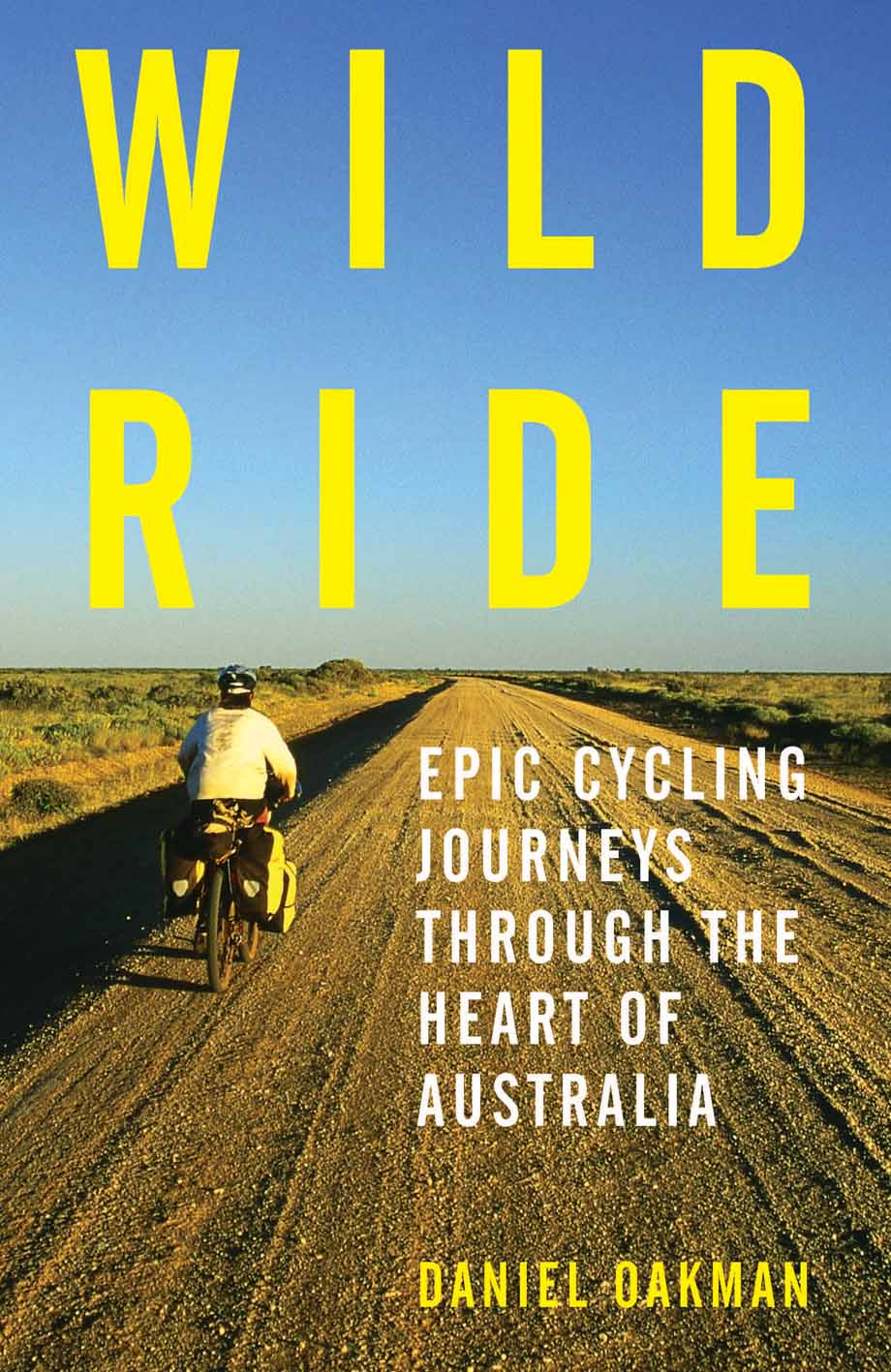 Daniel Oakman is known to Pez readers for his excellent biography of Australian pro cycling star Sir Hubert Opperman and Oppy does figure in this book as “Austalia’s greatest endurance rider.” Leader of the first Australian team to enter the Tour de France in 1928, Oppy’s story here is of his 5,000 km ride from Freemantle to Sydney, accomplished in less than 14 days in 1937, the one great challenge that he felt had eluded him in his impressive cycling career. Sponsored by the delightfully mercenary Malvern Star bicycle company (whose representatives appear throughout the book), he was accompanied by a company car and caravan but still found the going hard. But his feat was like a luxury trip in comparison to those described in earlier chapters of the book. 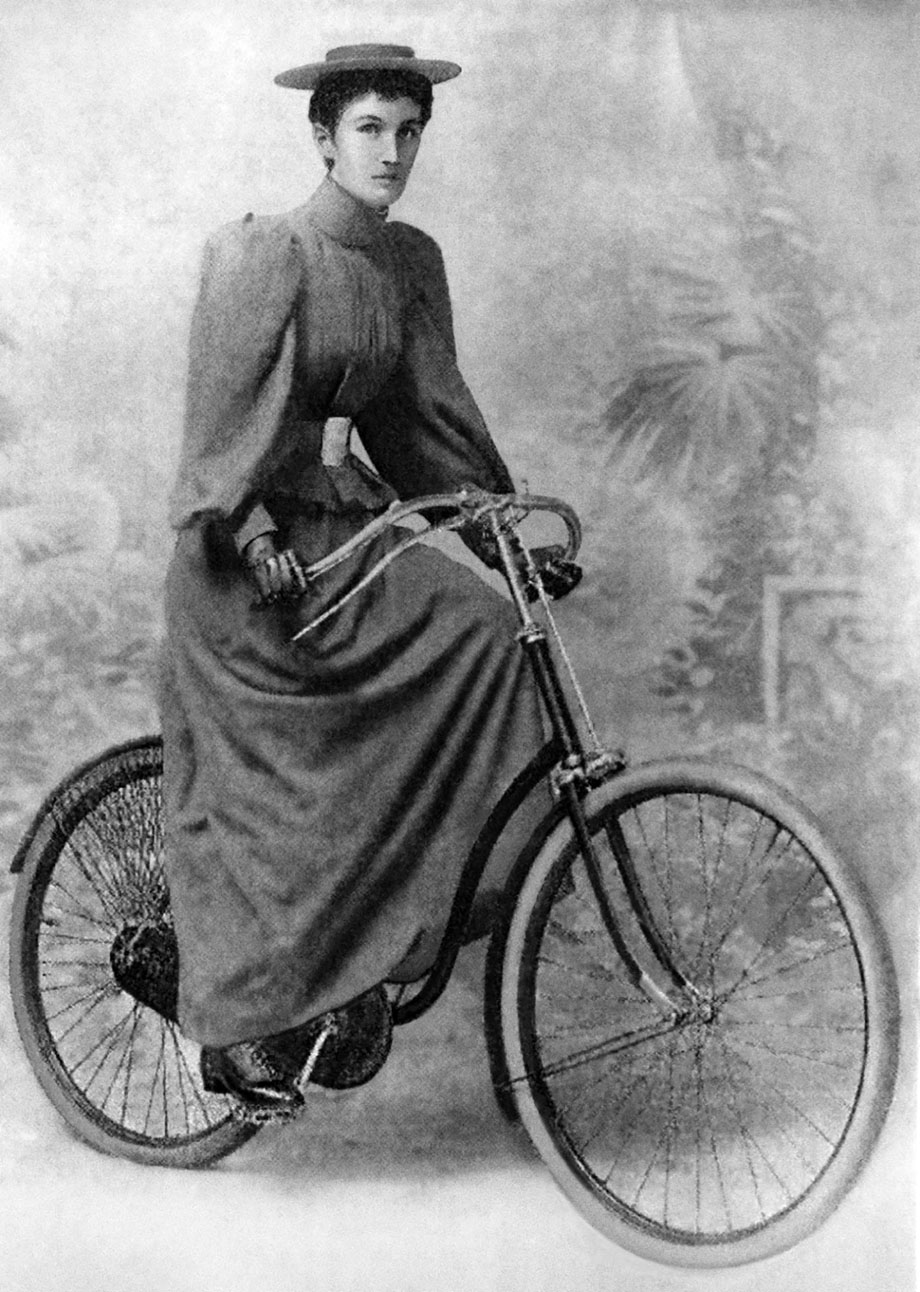 The book opens with an account of the life of Sarah Maddock, a pioneering lady cyclist who did a number of long-distance rides accompanied by her husband. The worldwide bicycle craze had also arrived Down Under in a big way, both for urban residents and those in the Outback. But there are bike rides around town and then there are other bike rides. The Maddocks rode from Sydney to Melbourne, a distance of 925 kms, in 1894 and the idea of a middle-class woman accomplishing this was almost beyond comprehension. Mrs. Maddock, who was blind in one eye but seemingly unstoppable, showed that cycling could be done by respectable ladies and lived to a ripe old 94. Sadly, many of the accounts of her rides dealt with proper clothing for women cyclists and ways to avoid scandalous dress. 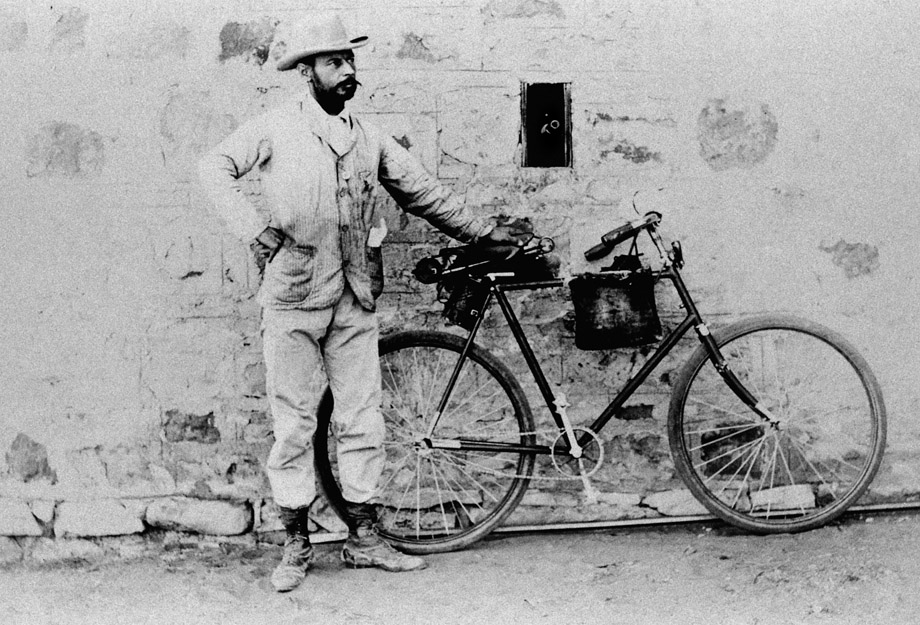 Far more eccentric was Jerome Joseph Murif who, in 1897, believed that he needed a more serious kind of challenge and decided to cross Australia south-to-north, from Adelaide to Port Darwin, a distance of 3.380 kms. His cycling outfit was pinstriped pyjamas, a homburg hat, thick leather boots and a pistol. 350 kms north of Adelaide bicycles were unknown and Murif pedalled off into a desolate world of sun-baked landscapes. At one point he rode for three days without food, following the telegraph line when he could, but often getting lost. Not the kind of person to live off of the land like the Aboriginals, “most nights he went to bed terrified, with one eye open and a loaded revolver.” It was an extraordinary journey for the time given that there were no real roads for him to follow most of the time and a rugged landscape that would probably have destroyed any bike other than his sturdy 13 kg single speed bike with extra thick tires. 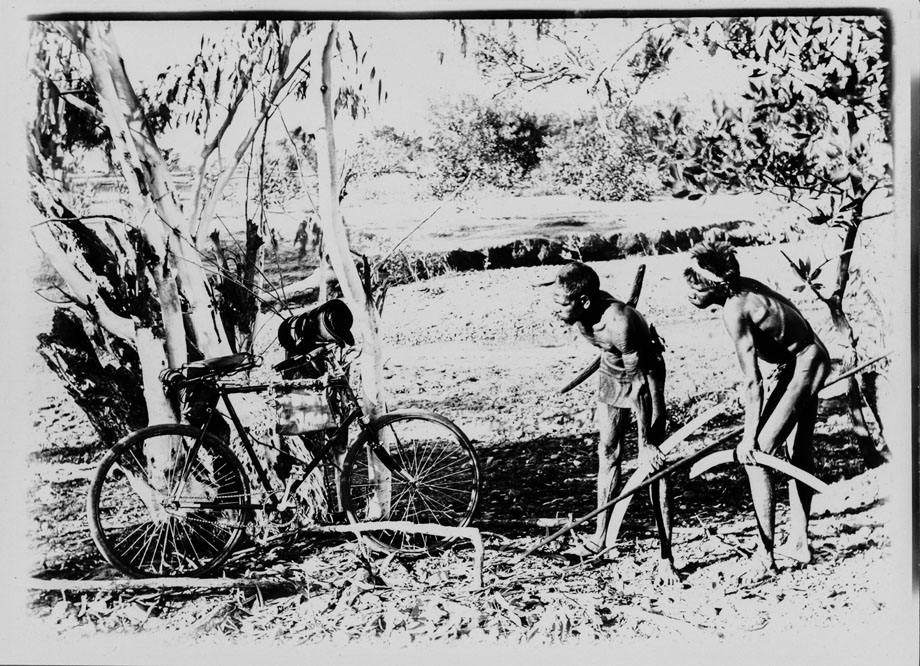 Nearing the end of his 74 day journey, “he encountered fields of grass so thick and tall he could not see over them as he rode. Unable to see the track, he was forced to dismount and search the bottom of the tunnel of grass to make sure he was heading in the right direction. Annoyingly, grass coiled around the bike’s chain and sprockets, stopping him in his tracks. Only after hacking it away from the mechanical components could he press on.” 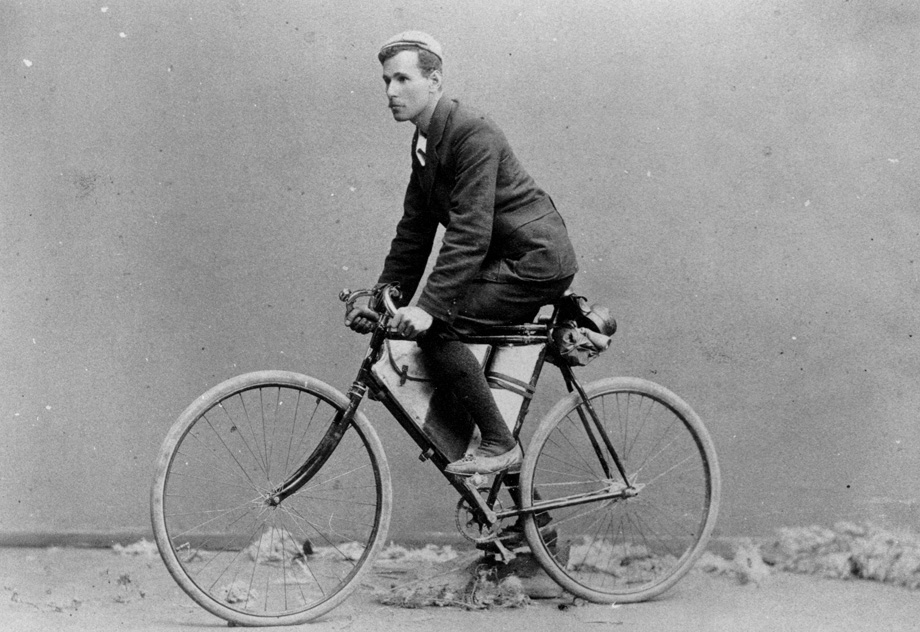 Even more determined was Arthur Richardson who, in 1899, set out from Perth to circle the entire continent, some 18,000 kms, on his bike. Three years earlier he had been the first to cycle across the Nullabor Plain. His bold ride was matched by some other adventurers, circling in the other direction. All the travellers had to face dire weather, lack of food and either too much water in the rainy season or too little. Adding to the danger of the ride was going through regions where Aboriginals threatened as native unrest under colonial rule rose. These early cyclists were of their time and their journals demonstrated a lack of interest or at least understanding of the original inhabitants of Australia. Richardson’s trip was no cakewalk: “When his supply of flour and sugar ran out, he survive on lily roots, berries and fish. He began to feel unwell, his body was aching and a fever took hold. As his strength ebbed away, progress slowed to a crawl. But a lack of food forced him to keep moving.” It took Richardson 243 days to get back to Perth in spite of all the obstacles. The current record for riding around Australia was set in 2010 on a recumbent bicycle—a mere 48 days.

Sprinkled in among these hardship cases are people who actually seemed to have a good time riding their bicycles insane distances. Successful Sydney clothing store owner Joe Pearson marketed to the cycling trade and was so enamoured with the bicycle that he became the publisher of atlases and guidebooks so that others could enjoy the scenery of Australian he found so enthralling. The cheerful Ted Ryko brought along a camera on his trip from Adelaide to Darwin and took many photos that today are of considerable ethnographic interest, as well as collecting botanical specimens. 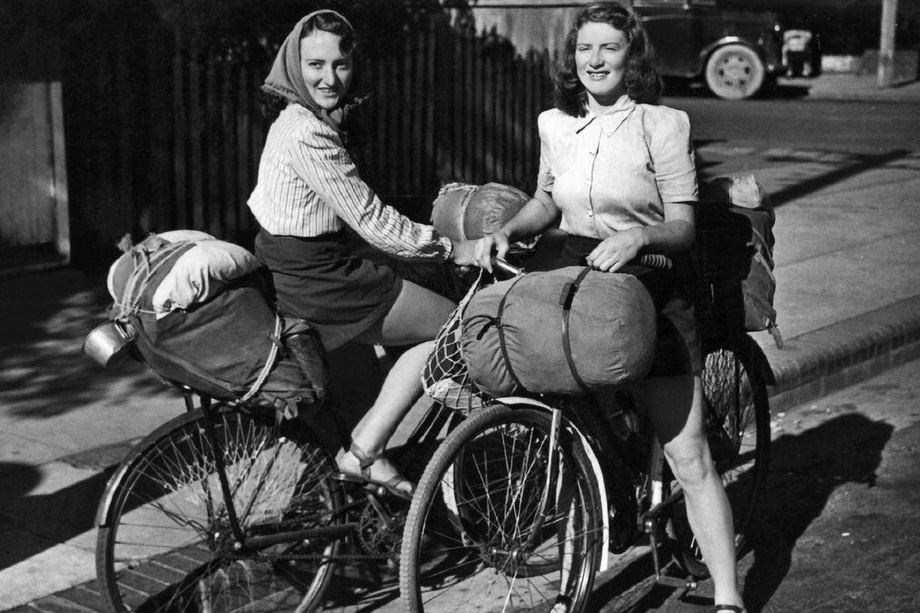 Then we have The Girl Cyclists, Wendy Law and Shirley Duncan, respectable young women who set off, abandoning conventional life, to cycle the length and breadth of the country in 1946. After a trial run in Tasmania they embarked on a three year adventure that took them around the mainland, “becoming national celebrities, the most recognized and famous touring cyclists in Australia.” They were inventive in their fund-raising, selling magazine subscriptions and successfully leaning on Malvern Star. Even their dog, Peter, named for an ice-cream company sponsor, was a press personality. Where else have touring cyclists (not pro athletes) become so noted? 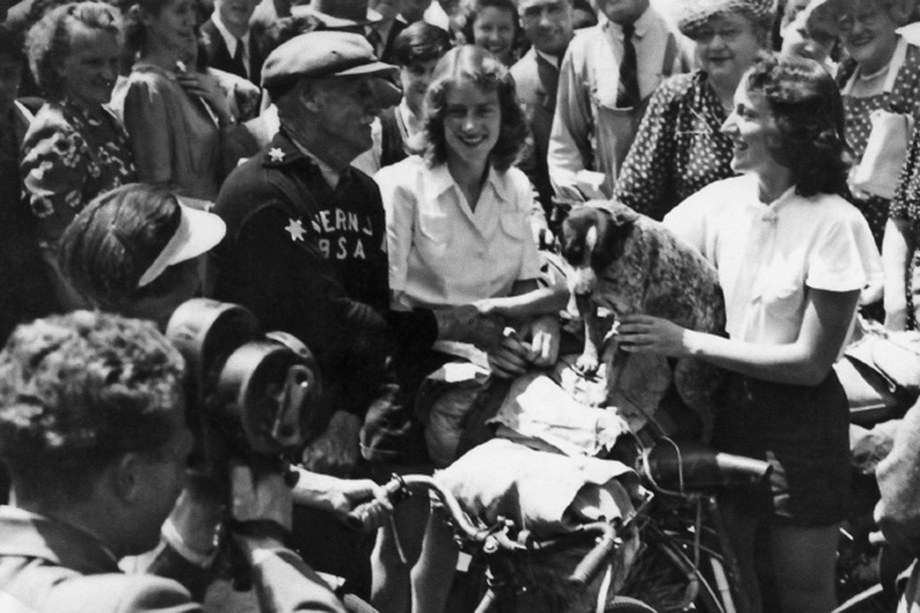 In Australia they were not alone and next in the book is someone they actually met on their travels. The remarkable Ernie Old really only got started to ride serious distances once his five children had left home. The idea of a 70 year old riding from Melbourne to Sydney and back (and showing up for work the next day) was the stuff of popular amazement. In 1947 he rode a 4,025 km round trip to Brisbane in 23 days riding, yes, a Malvern Star. At 73 he decided to ride from Melbourne to Darwin and back, some 10,000 kms, telling reporters he wanted to see the country while he was still young. He was a proponent for physical fitness and a sincere advocate of the great outdoors and must have been a delightful person. As the author notes, “A gentle yet determined spirit, Ernie Old was a paragon of sporting virtue, discipline and clean living; the last truly national cycling figure. For Australian bicycle riders, nothing has been the same since.” 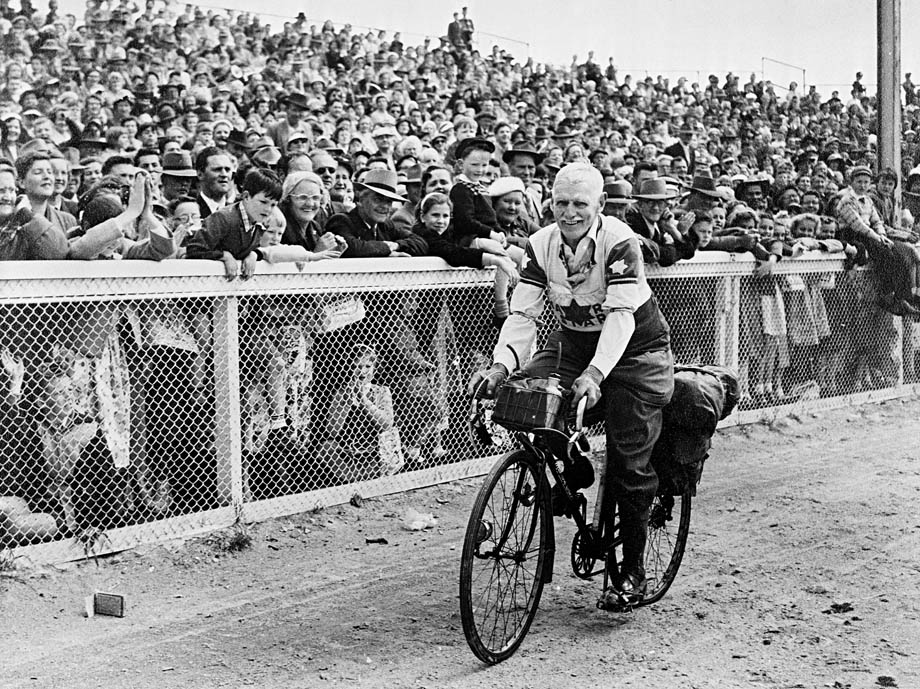 Last Crusader: Ernie Old rides a lap of honour at the Melbourne Showgrounds after riding 10,000 kms to Darwin and back, 1947, photo National Archives of Australia

The final chapters are of more recent challenging journeys in this new age we are in where a variation of bicycle touring (aka “bikepacking”) has become an enterprise. We have a woman who rode 12,000 kms to bring attention to the natural environment; a couple riding the length of the eastern side of Australia along a rough national bike trail (taking care not to camp in the vicinity of saltwater crocodiles) and the endearingly eccentric actor who rode his unicycle (!) around the country to raise funds for cancer research as his sister was dying.

“Wild Ride” is a highly entertaining look at a disparate group of cyclists across a century, linked only by their determination to see their huge country from a bicycle saddle. More than a few were troubled, as brief postscripts show, and for many life must have been an anticlimax after these gruelling undertakings. Each chapter includes a small map of Australia with the subject’s route marked and it takes some mental readjustment to understand the distances travelled in this, the world’s 6th largest country. 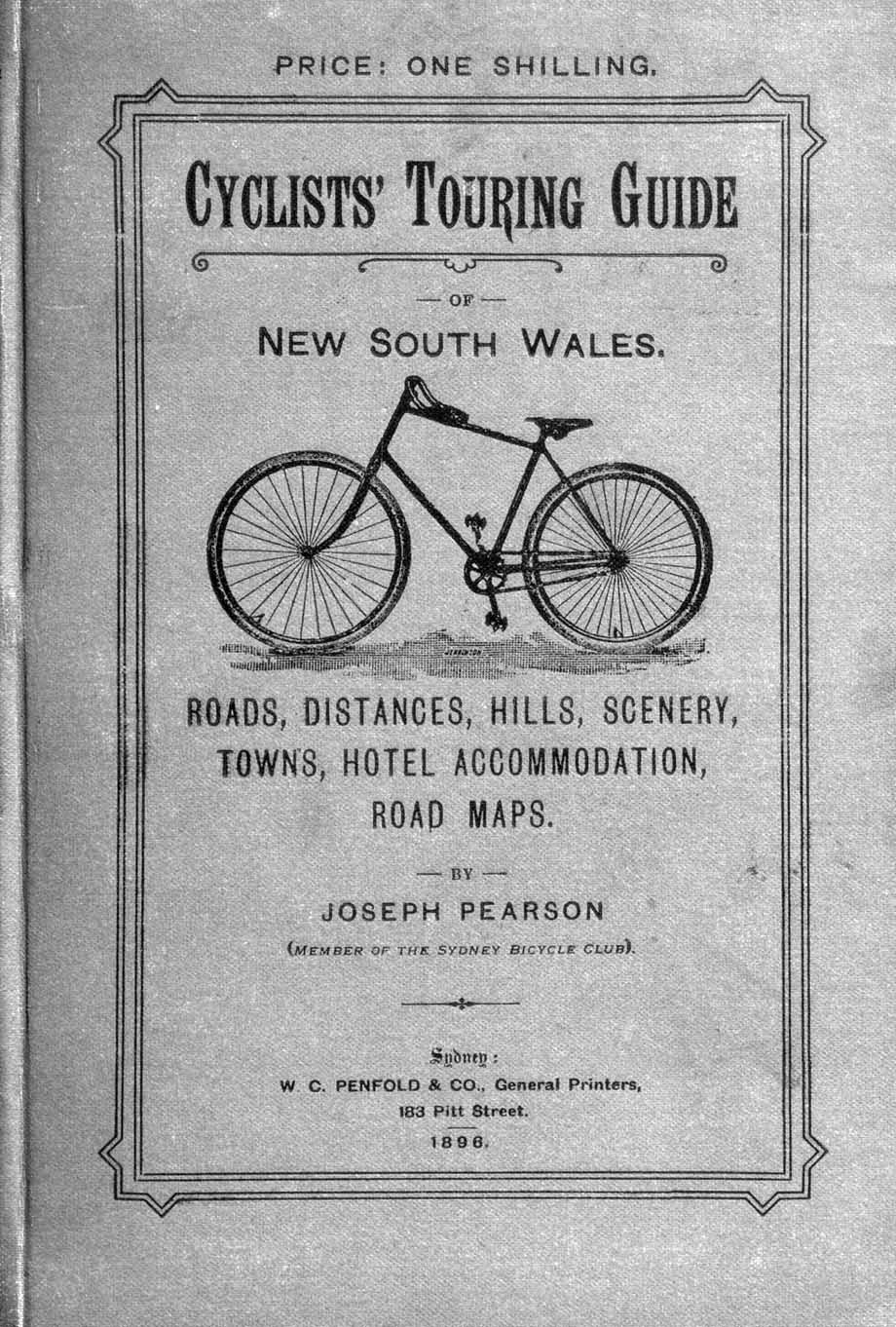 Daniel Oakman clearly admires and respects his subjects, their faults and disappointments undisguised, Those who set records have seen them long surpassed—the 925 km Melbourne to Sydney women’s record of nine days set by Mrs. Maddock in 1894 had been reduced to an astounding 1 day 16 hours and 23 minutes by a milliner in 1938, a record that still stands. This may say something about the improvement in the roads as well as cycling equipment, clothing, nutrition and training over the decades but the indefatigable cross-country cyclists in “Wild Ride,” their stories writ large in the newspapers of the day and devoured by an enthusiastic public, should be seen as inspirational to those following in their wheeltracks, whether in Australia or the other wild regions of the world sought out by today’s bikepacking adventurers. 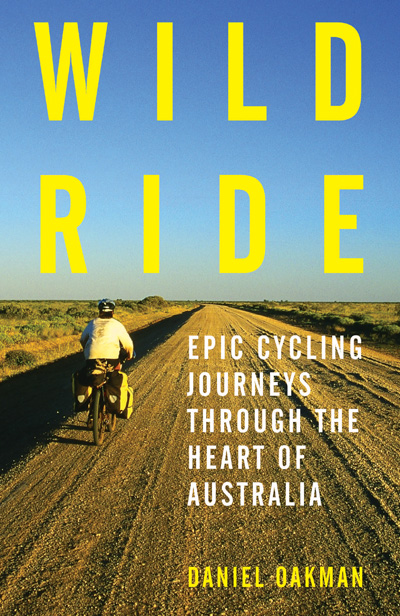 *** “Wild Ride: Epic Cycling Journeys Through the Heart of Australia”
by Daniel Oakman is available from AMAZON.COM. ***