One of the most interesting teams in the peloton, Garmin-Sharp (as it has now become) is reflected in an equally interesting book by Mark Johnson entitled “Argyle Armada: Behind the Scenes of the Pro Cycling Life.”

Pez note: The photos used in this review are just a few from the numerous big color pics from the book.

April 17, 2012: a cold, damp morning in Belgium as I ride the course of la Fleche Wallone, scheduled for the following day. We go through deserted villages, past draught horses standing in the barren frosty fields and spot the lurking shadows of forbidden castles under the grey skies. Around a turn and there stands a gleaming blue/black/white pro team bus, with a group of racers milling about. It is Garmin-Barracuda and as the riders pull out for a training ride and route familiarization, I’m rolling right there with them.

Well, until the first slight rise when we watch the team effortlessly slide away, spinning remorselessly from sight. Still, a memorable encounter in one of cycling’s natural habitats. One of the most interesting teams in the peloton, Garmin-Sharp (as it has now become) is reflected in an equally interesting book by Mark Johnson entitled “Argyle Armada: Behind the Scenes of the Pro Cycling Life.” 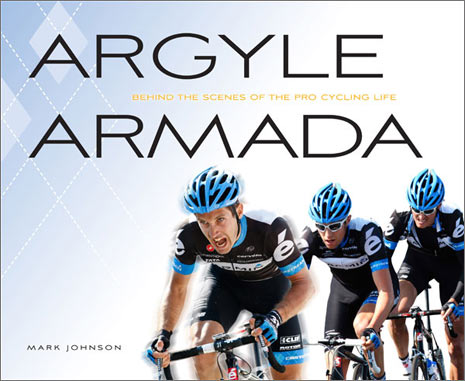 First of all, this attractive large-format book is up to the usual high quality of VeloPress publications with fine paper stock and excellent reproduction of the great photographs by the author. The author/photographer has been involved with Slipstream Sports, owner of the team, in one capacity or another since 2007 and the book looks at the team during the 2011 season. Mr. Johnson’s timing was a bit unfortunate since the team, nibbling on and off at greatness, scored its clearest triumph at the 2012 Giro d’Italia as Ryder Hesjedal took a well-earned overall win. The team dominated the domestic USA Pro Challenge race in Colorado in August but by the time this happened pro cycling was in the news for other reasons. On August 23 Lance Armstrong declined to appeal the USADA ruling against him and the ripple effect quickly caught up to the Garmin team. But none of this is in the book of course but is worth mentioning light of how the Garmin team is focused. 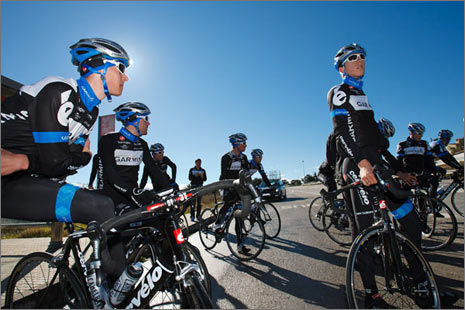 In spite of being overtaken by events to some degree, “Argyle Armada” has strengths that still would recommend it. The book opens with the 2011 training camp and typical activities such as posing for promotional pieces and hanging around hotels in Girona, Spain but already on the 3rd page there is a reference to the over-arching goals of the team and how its founder and CEO, the picturesquely profane Jonathan Vaughters, aims to disrupt the traditional world of pro cycling:

“Vaughters quit racing because he did not buy into a culture that systematically overlooked, hid and ignored doping. Then he made it his goal to make the sport more financially stable for riders, team owners, sponsors and race organizers.”

The firing of Matt White, a popular team official who was let go for recommending a doctor not approved by the team to a rider underscores the seriousness of the effort although the author does not address the criticisms that had been levelled at Vaughters who, at that point, was suspected of having doped himself as a pro rider but was not admitting to anything. 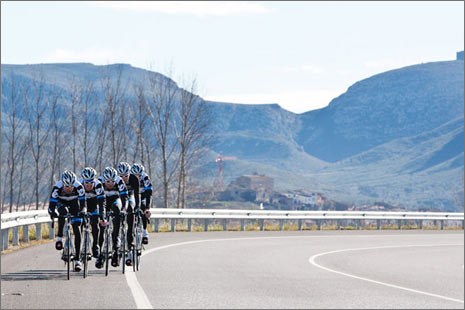 In terms of sponsorship, the team has reflected the difficulty of cycling’s financial landscape through its name changes. Beginning as a junior development squad in 2003 sponsored by a Denver magazine, it then bore the name of TIAA-CREFF for two years before Slipstream Sports was founded in 2007 and the team became Team Slipstream Powered by Chipotle (2007-2008); Garmin-Chipotle Presented by H30 in 2008; Garmin-Slipstream in 2009; Garmin-Transitions in 2010; Team Garmin-Cervelo in 2011; Team Garmin-Barracuda for the first half of 2012 and, finally, Team Garmin-Sharp currently. Well, at least Garmin stayed around even if the very distinctive argyle-patterned kit from the early Slipstream years has not. In fact, except of a blue band of argyle with the Slipstream name on it on the odd sleeve or pair of shorts, argyle is prominent by its absence given the name of the book. 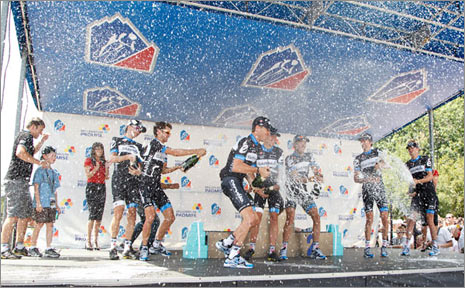 As is typical of books about specific cycling teams, “Argyle Armada” is arranged in chronological order. 2011 was a good year for the Garmin team. After a not particularly impressive Tour of Flanders, the team struck gold with Johan Vansummeren’s victory at Paris-Roubaix, Garmin’s first win in the Classics. The account of the win in the book where Vansummeren describes his feelings as he enters the last 3 kms of the race with a leaking tire, unable to see the crowds but focused on what could be terrible bad luck, gives a nice insight into the mind of a racer under stress. 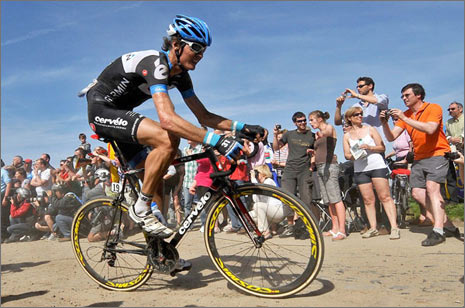 The book next takes us into the Ardennes, and then the snowbound Tour of California in the next chapters before reaching the Tour de France. In this case Mr. Johnson’s timing was excellent as Garmin-Cervelo riders won the team time trial, three individual stages and the best team classification. Then it’s off to the USA Pro Cycling Challenge for part of the team while other Garmin riders go off to Spain for what turns out to be a crash-filled Vuelta but includes a stage win for climber Dan Martin. The season winds down with two races in Quйbec and that was 2011 for the team. 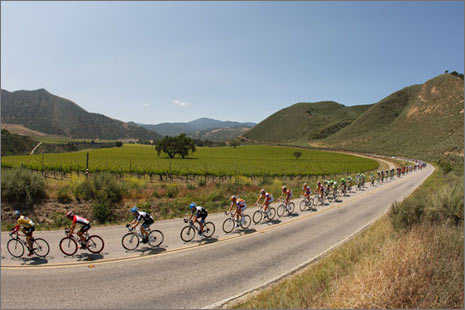 What is striking in each of these chapters is not just the usual account of racing strategy and successes and victories but the emphasis on individuals who make up the team. The author colours in the personalities of the group once referred to as “Vaughters’ Wacky Racers.” They come from different countries, have different outlooks and goals. And it reinforces the point that Garmin is truly a team, not a superstar-led guns-for-hire kind of organization. Everyone seems to get a crack at winning something, which must be a huge boost for morale. One cannot help but notice how many photos in the book show the team rather than single riders as well. 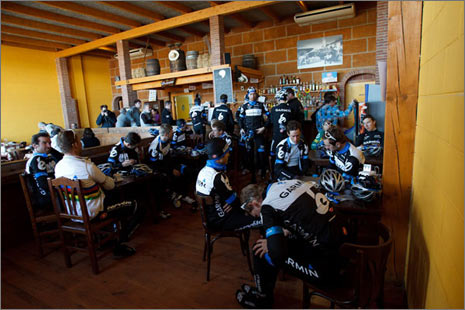 Of course something has happened to those single riders in the meantime. On September 6 Vaughters, in writing on a cycling Internet forum, referred to his own doping as a pro and then went on, amazingly, to name three of his current riders who had taken illegal performance-enhancing drugs in their careers. All had belonged to the US Postal team of Lance Armstrong and, as it turned out, had given sworn testimony about doping there as revealed by the USADA’s “Reasoned Decision.” The riders (Tom Danielson, Christian Vande Velde and Dave Zabriskie) were given six month suspensions.

There are interesting stories that do not appear in the book, which is also sometime a bit less critical than it should be. One is Vaughters’ exceptional skill at finding and grooming young talent. One of his prizes, Bradley Wiggins, who placed an unexpected 4th in the 2009 Tour for the team, was prised away from him and has gone on to greater things. The current rising star appears to be Andrew Talansky, who had a good 2011 but in 2012 won the Tour d’Ain and come second in the Tour de Romandie (after Wiggins) and even finishing in the Top Ten at the Vuelta. Young talent is balanced by the presence of older riders like David Millar, Andreas Klier and Robert Hunter. In addition, the team is not afraid to try new approaches, such as ice vests to keep core temperatures down when getting ready for a time trial (a particular strength of the Garmin team) or trying odd diets (gluten-free, anyone?). Nor is there much about the merger between the Continental Pro Team Cervelo and Garmin, which brought Road World Champion Thor Hushovd and the not-quite-a-star-yet Heinrich Haussler to the team. Hushovd did not seem like a good fit for the eccentric team and left with his big un-Garmin-like salary but Haussler has stayed on. 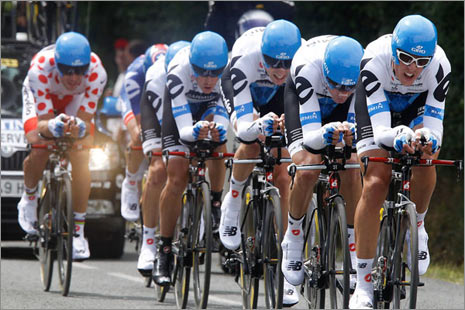 The approach of the team to drugs has been unusual. Although Vaughters has hired repentant dopers such as David Millar and Thomas Dekker and been severely criticized for it, the team has sought to be as open about its testing procedures and, as the Matt White case showed, stringent about its own rules. If one accepts the doping cases of Danielson, Zabriskie and Vande Velde as having occurred only during their US Postal time, the history of Garmin has been unusually clean for a pro racing team in operation since 2007. And the team is opposed to doping for good reasons. Not only is cheating bad policy generally and there are health issues but Vaughters is aware that to take cycling into a higher level as a pro sport sponsors have to be satisfied. 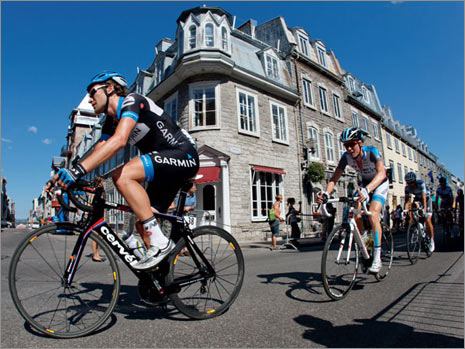 This brings us to what, to me, is by far the most interesting and important chapter in the book, covering ground that is usually not apparent in other cycling books: namely, the business of pro cycling. There is a fascinating discussion here of finances and of the role of UCI points. Vaughters has really interesting ideas with respect to overhauling the race calendar in a sport where the Tour de France alone sucks out all the air and he has a vision of attracting recreational cyclists to be greater fans. There are valuable insights from race organizers and riders. Given what has now happened in pro cycling as one of the only globally-recognized figures of the sport has been dethroned, Vaughters’ team concerns might be a good model for a revision of the sport at a time when it clearly needs a complete overhaul.

Mark Johnson may have been too early to chronicle the big wins of Garmin in 2012 and the temporary fall from grace of three of its top riders but the problems and potential solutions described in Chapter 9 of the book are very timely indeed. Add to this a lively text and really superb photographs and you have more than a coffee table cycling book here. I just wish the riders still wore that weird but wonderful orange-and-blue argyle pattern on their kit…

In spite of being able to operate almost all the features of his three Garmin bicycle GPS units, Leslie Reissner may still be found taking the road less travelled and getting lost at tindonkey.com
Like PEZ? Why not subscribe to our weekly newsletter to receive updates and reminders on what's cool in road cycling?