PEZ sits down with an industry insider who wishes to remain anonymous that offers some unexpected insight, contentious opinions and certain provocations on visual design in cycling.

Now that we are firmly into the 2011 season, which team kit gets good marks in your opinion?
I believe that the most important aspect of team uniforms is visibility, essentially they are billboards for their sponsors. Remember that cycling is much more dependant on sponsors than any other sport. Well designed kits should be instantly recognizable. In this respect, Lampre gets a good score from me. It also helps that they have been around since 1990. Longevity, in addition to years of success from Fondriest to Cunego, create a powerful brand. This year’s design integrates ISD with a dual band for each principal sponsor. Simple solutions are often the best. 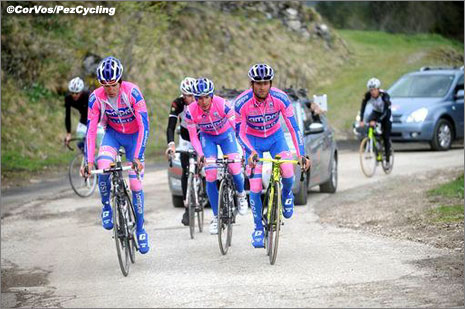 Easy to spot these guys in the peloton, especially since they’ve been there for over 20 years.

Really? I don’t think many would consider Lampre exceptional… any others?
Ok here’s another insider’s choice: I also like, or better yet, admire the Androni Giocattoli kit (Landbouwkrediet could also be mentioned). There is something very honest about having 10 million names plastered all over it that points to the financial hardships of Continental racing teams, and accordingly their boys always animate races. This year’s addition of Bianchi as the bike sponsor brings some splashes of the famed celeste color to the team kit – instantly recognizable as Bianchi. Though it is an amazingly simple and valuable concept: pick a unique color and stick to it for 100 years, most businesses are unable to see it through.

Lots of sponsors, Bianchi is the clear winner.

Any losers from this year?
Unfortunately Garmin, Leopard and Sky have too similar looking kits. It’s funny because they are all quite elegant designs, especially the backwards tuxedo of Sky. Also a shame is that the original and familiar orange argyle from Slipstream Garmin has been pretty much abandoned. The years that had been invested in that design, or brand equity, were too easily given away, obviously they lack Bianchi’s diligence.

Kind of hard to distinguish between these kits, if I was paying millions of dollars a year, I’d like everyone to know it.

The Geox kit is also disappointing considering that the sponsor is in the fashion industry – almost makes one nostalgic for their old Footon kits… almost. 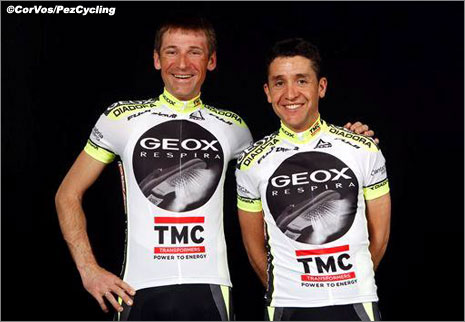 I get the feeling that you don’t like the recently rebranded Eddy Merckx bikes?
There are valid reasons to redesign a company’s logo, new ownership is a perfect example. After Cinelli was acquired by Columbus in 1978, Italo Lupi was commissioned to create the now famous winged C logo to replace the old script. I think it is a beautiful piece of design. Whereas the original Merckx logo was very much a product of the 70’s – it could hardly be called timeless. Though I don’t particularly like the origami folded M as a strong logo for a bicycle company, I can see the logic of the new owners and their new logo. 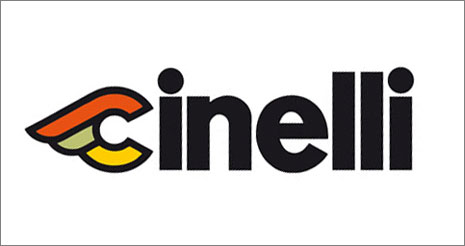 Scott also has a new logo, your thoughts?
It’s attractive, two forms create a negative space that resembles an S. The script has also been sharpened up, removing the bulky outlines helps. Slick and modern, improved focus from the swerving road S thing Scott used previously. But the more important point is: how a company uses its logo. Though the Nike swoosh is a nice shape, it is nothing extraordinary, certainly comparable to the previous logo from Scott. However the swoosh has become a powerful, international symbol through the company’s highly effective and costly marketing efforts. As for Scott, the old logo often crossed the finish line first driven by Cavendish, this new one hasn’t. So can it be said that the new logo is more effective? 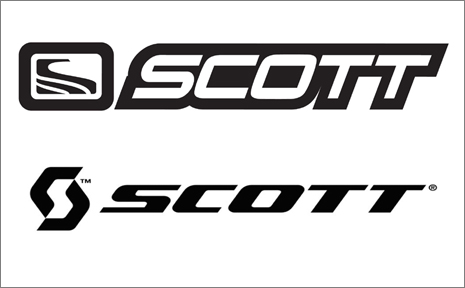 Previous logo on top, the new sharper one on bottom.

Some examples of good logos in the bike industry?
Colnago’s asso dei fiori, Columbus’ dove, Campagnolo’s winged skewer shield are all timeless designs. Remember, all of these have been freshened up over the past 30 years, but they remain true to their original vision. Design is not static, it needs to evolve and take new forms to accommodate new applications of communication. 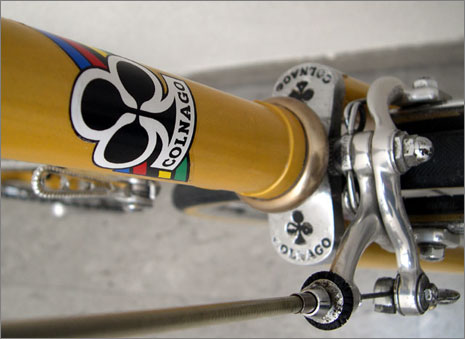 The ace of clubs logo is supported by hundreds, no thousands of palmares.

Another important factor is that the company and their products or services make the logo, not the other way around. Enron had a great logo, designed by Paul Rand, but it is now associated with corruption and failure. The Colnago, Columbus and Campagnolo logos are great because the products behind them are great (usually). 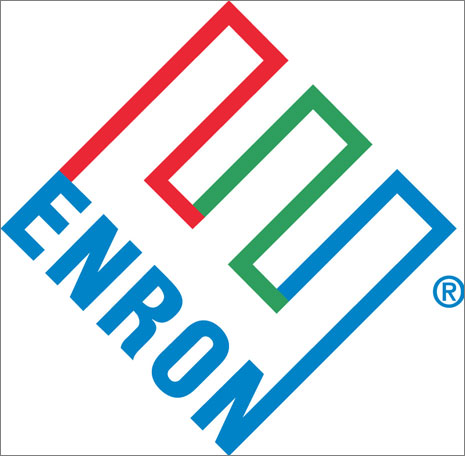 A great logo created by a great designer was not enough to save this poor company.

Ok the Italians have style, but what about Shimano or Giant?
Toyota’s brand stands for reliability and technical know how. Alfa Romeo’s is flare. Shimano and Giant are kind of like Toyota. Their sober, proficient design sensibility is in harmony with their promise of quality. These are large companies that produce large amounts of stuff and accordingly, project that largeness. There is little reason for Shimano to play the same whimsical tune as a small Italian. Lastly, Giant is an Asian company that makes bikes in their own factories in Asia (as far as I know) and for this simple reason is one of the few true bike companies left. Today’s global economics have reduced most companies to progettistas and marketing specialists, which makes a critical discussion like this one all the more relevant. 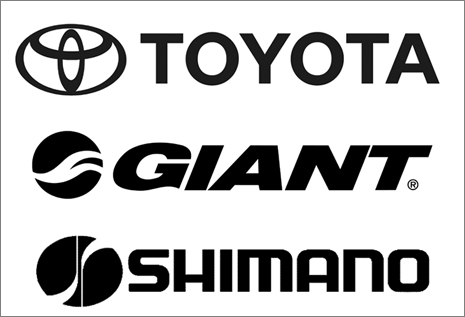 Understandably these logos share certain sensibilities, maybe too many.

So dour design can be good design?
Sort of. I think an apt example of being true to one’s roots can be seen in Cervйlo. They have always presented themselves as engineers first. According to them, the Soloist was the first aerodynamic bike used in road racing. A lucky byproduct of the huge airfoil downtube was an enormous space for the company name. They used it wisely and all those wins from CSC confirmed their claims of superior engineering (or did little to dispel them). Though I question the recent use of the “й” from their name as the basis for a logo form, and Leopard is doing the same with their underlined O, it is easier to forgive Cervйlo because they never asked to be judged by these design standards, whereas a company like Pinarello does. 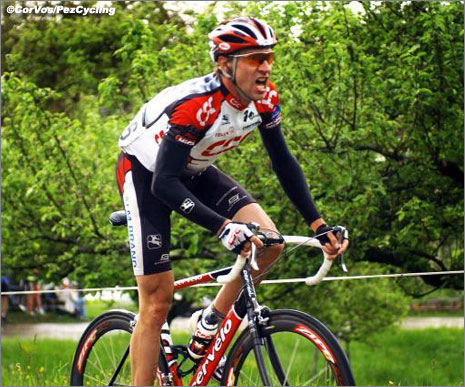 Certain companies “ask to be judged” by design where other’s don’t?
Of course. Take Apple. Why aren’t there any of those Intel stickers that clutter up most laptops on Apple’s, despite Intel providing the chips? Apple foregoes Intel’s subsidies because they place a premium on design. There are very few businesses in the world that refuse free money. Apple does because superior design is their core value. They have even proven this approach to be highly profitable. 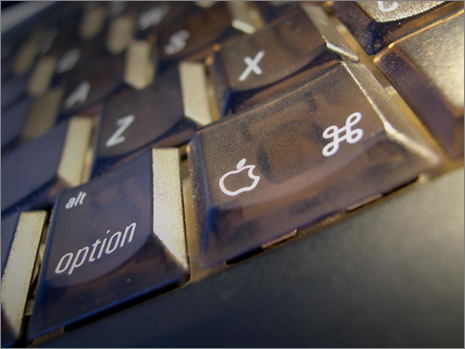 You’ve made it quite clear your disapproval of the red-white-black predominance of bikes, do you think we’re headed towards a blue-white-black trend due to the 3 Pro Tour teams?
Three years ago, I asked Ernesto Colnago, a great non-conformer, why he was offering red-black-white bikes just like everyone else’s. He answered dejectedly, “because that’s what the market wants.” If the market can get Colnago to bend, then you know that it’s become a powerful force. I don’t see that we’re trending to blue, but it wouldn’t surprise (nor please) me either. I think bikes should be bold and vibrant or elegant and restrained. Kleins had great style, great paint, sometimes kitschy, sometimes classy, but always special. 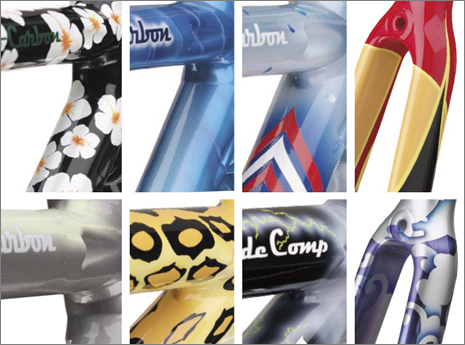 Here’s the problem with all of these red-white-black bikes: their predominance prohibits them from being special. Why spend thousands of dollars to look average? In fact, it’s quite ironic that companies like BMC, Time, Cervиlo, Look, DeRosa and others that excel in design succumb to mediocrity in their graphics. Let’s also be clear that the “market” is predominantly males aged 30 to 50, upper middle class and well educated – hardly mediocre. 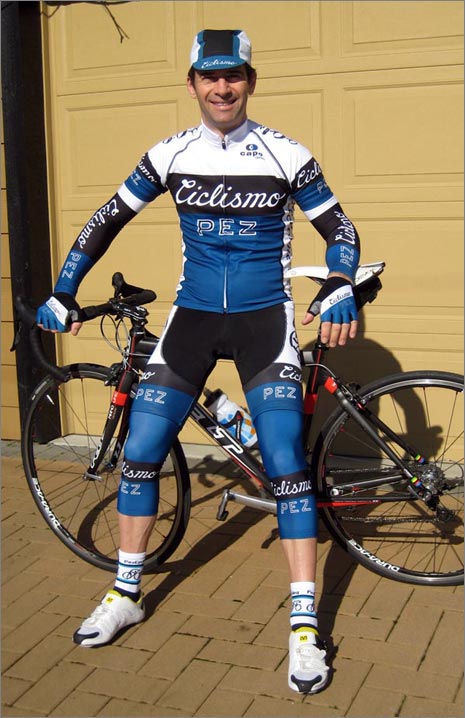 Look no further, here’s your Market on a red-black-white bike, 🙂

That sounds a bit grouchy.
I disagree. I’d like to think that the popularity of the steel or NAHBS scene is due to our appreciation of Specialness. In addition to the artisan handmade-ness and big personalities of some of the builders, luscious, unique paint is a fundamental part of this movement. Yet, this is not only a steel thing. 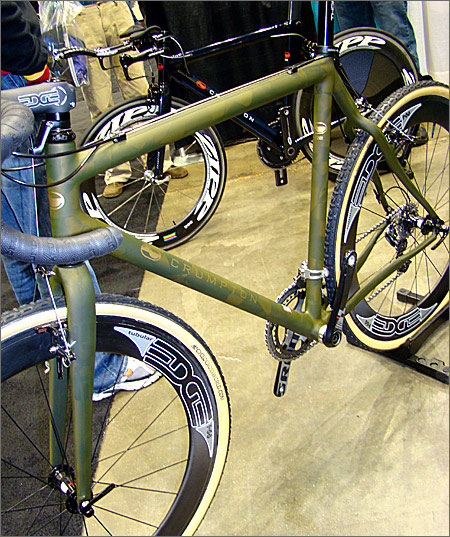 Parlee has shown that natural carbon textures can be very attractive. Or Crumpton uses tinted clear and matte finishes in brilliant ways. It’s the great challenge facing today’s carbon fiber bikes: why should one add an additional 100 grams in paint to an 800 gram frame? Steel needs paint, carbon doesn’t, so a valid justification needs to be established, otherwise it’s a bit disingenuous. Using color to distinguish your brand from others is a valid reason. 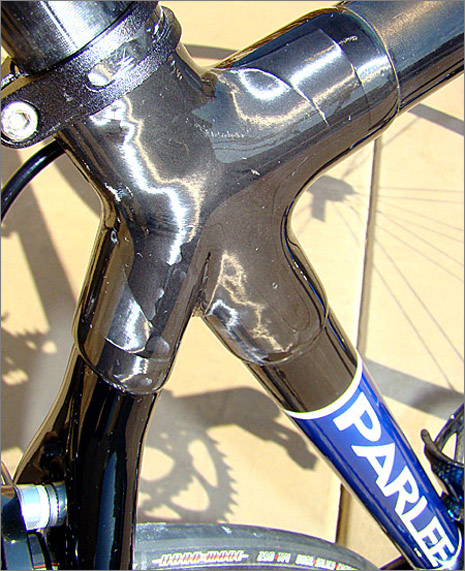 If you were made Global Bike Taste Maker for a day what would you decree?
I’d decree that 90% of road bikes should wear white or black bar tape. There are certain cases where a red or yellow could be used, but only when highlighting the secondary color on the bike – a red bike does not need more red in the bar tape. If cyclists wish to experiment with colors, try different colored electrical tapes to finish their black or white bars. Bar tape is kind of like the Arenberg Forest, you can’t win it there, but you can certainly lose it there. 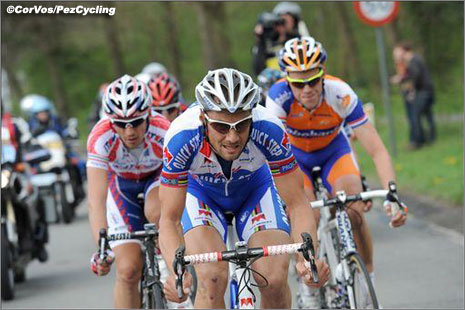 How else do you like to see bikes set up?
A bit geeky can be good. When I see a red light mounted on a bike, it usually points to a devoted cyclist that rides early and/or late or through tunnels and mountain passes. A frame pump can also mean that this bike is really ridden. A strong rider will make most bikes look good, likewise the most beautiful racing bike in the world looks foolish struggling to ride 25 km/h.

Another thing I like to see in bikes is a bit of un-matching-ness. All too often, cyclists with a white bike (or black or red) will match everything from shoes to pedals to wheels also in white. It’s too much, too fussy. A bit of disharmony is good. Take the cobbled classics, many bikes sport Vittoria Pave tires with their legendary, and often clashing, green tread and look great doing so.