Stage nine of the Tour de France is on the horizon. Mechanics are checking over bikes, HTC-Columbia’s riders are checking out of the Fleur des Neiges hotel in Morzine and I’m checking out a gorgeous white Principia, with striking striped decals, a Danish flag and the name Brian Holm displayed on it. Propped against a team car, it’s shining beautifully in the morning sun … and one just like it could be yours. 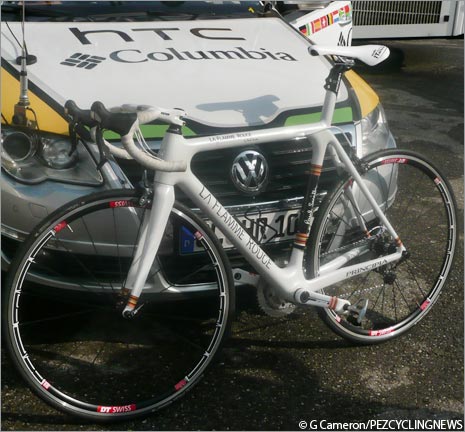 I’m intrigued by the stunning Principia now being lovingly boxed up in front of me. It’s not team issue, so what’s the story behind it? Around the corner, HTC-Columbia directeur sportif Brian Holm is having a coffee and shooting the breeze with Per Bшge, boss of the Danish Cancer Society. 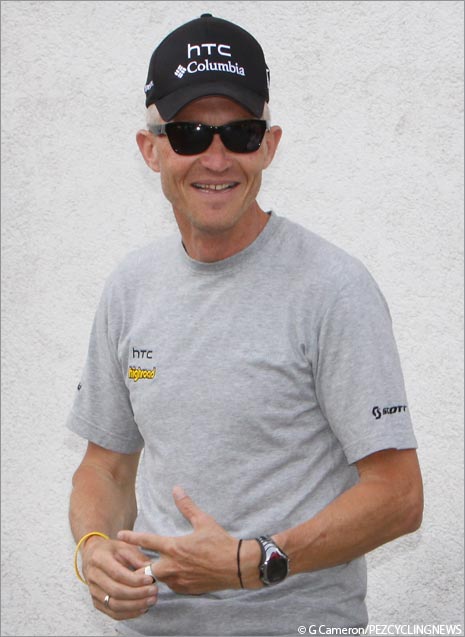 It turns out that six gorgeous Principias are looking for a new home … and this is where you come in. To help children affected by cancer or bereavement, and in collaboration with Om Sorg, the Danish Cancer Society, Holm’s La Flamme Rouge cycle clothing company will be auctioning off these beauties which have been exclusively designed by legendary English designer Sir Paul Smith, one of the UK’s coolest ‘exports’ and a renowned cycling nut. 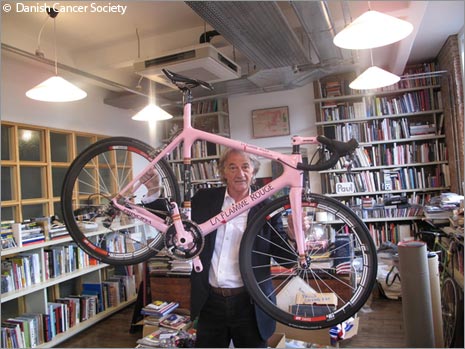 Sir Paul Smith gets his hands on one of the special edition Principia bikes he designed for La Flamme Rouge’s charity auction.

Smith and Holm are long-time buddies, with the Englishman helping to design a clothing range for La Flamme Rouge before embarking on the bike project. 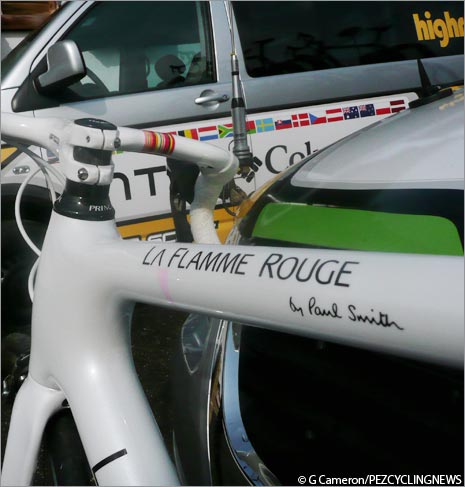 Six Principia bikes will be auctioned, each of which is a full monocoque carbon model: there are two with a white color scheme (small and large frame sizes), two black (medium and large) and two in pink (both medium). All bear high-end componentry and come with Smith’s instantly recognizable livery. 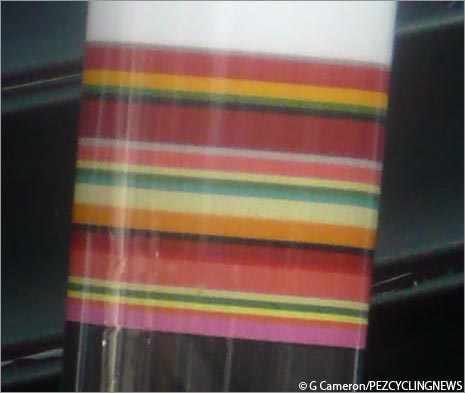 The pink models have SRAM Red components, while the black and white models are equipped with Shimano Dura Ace. FSA supplies the chainwheels, stems and handlebars; the saddles are from Prologo; the tyres are Continental Competition; the wheelset is DT Swiss Carbon. 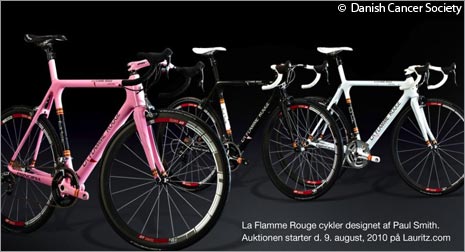 Four will be available in an online auction that goes live on Monday 9th August 2010 at Lauritz.com.

The remaining two models will be auctioned off at a special charity dinner at the legendary Kronborg Castle in Elsinore, Denmark – a UNESCO world heritage site, some of the more cultured among us will know its name from Shakespeare’s Hamlet.

Mai-Britt Hertzmann, as project director for the Danish Cancer Society, is helping to promote a better understanding of the help and support children affected by cancer and other traumatic situations need, and explained a little of the background. 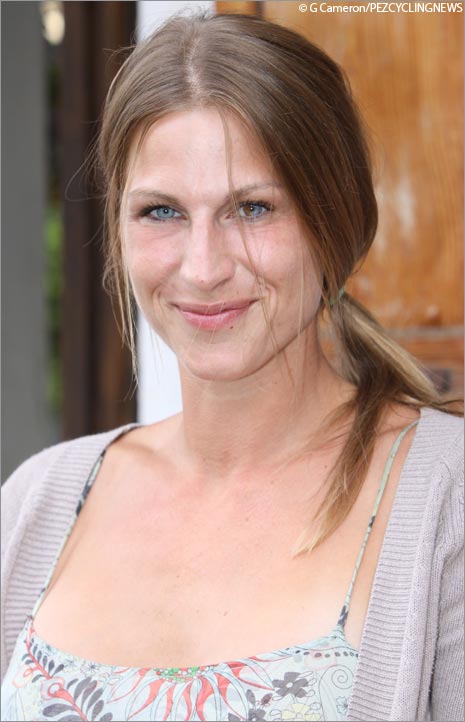 Mai-Britt Hertzmann was on hand in Morzine to explain the work of the Danish Cancer Society, and more about the online bike auction.

It’s a hugely valuable initiative – over the last fifteen years, the Danish Cancer Society has worked not only with children who have suffered cancer but those children whose lives have been affected by this or any other life-threatening illness, or by the loss of a parent as a result of illness or an accident.

The Society is now part of a new World Health Organisation mental health plan for children. For a little insight into who these children are, listen to Mark’s story. I defy you not to be affected by the simplicity of the message. Having had several family members affected by the illness, it certainly touched me. 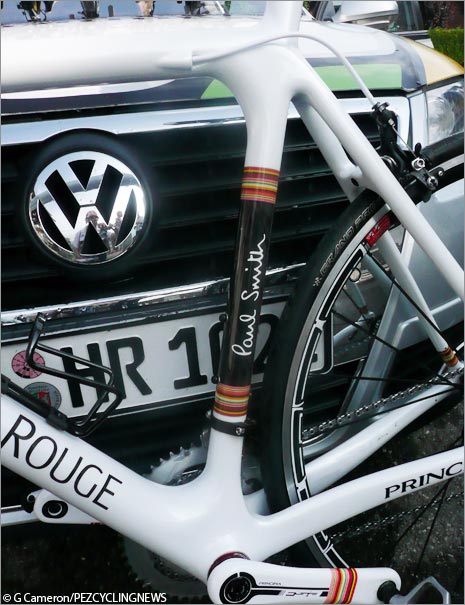 As Sir Paul Smith mentions here, he got involved with the charity with the aim of helping, and raising awareness of the situation of, children and young people who might be ‘lost’ due to a traumatic event.

You can also check out the designer’s glee when one of the bikes was delivered to London where he took it for a spin around his office.

La Flamme Rouge
Anyone who has watched a bike race thunder towards its conclusion recognizes the term ‘La Flamme Rouge’, the final kilometer. This is the name Brian Holm chose after he survived his own battle with colon cancer in 2004. After coming through the illness, and seeing how it affected him and his family, the seven-time Tour de France finisher and former winner of both Paris-Brussels and Paris-Camembert decided to do something to try and help those in a similar situation. 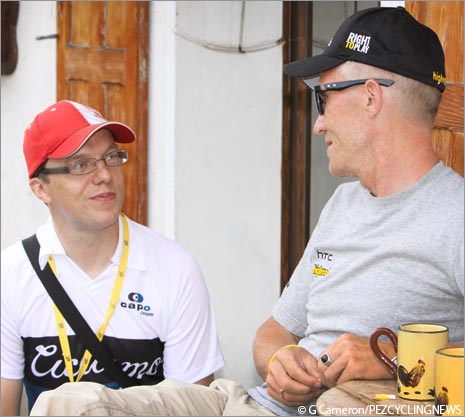 Like a sprint train working in the closing stages of a race to help a team’s sprinter to victory, La Flamme Rouge aims to give a helping hand to those who really need it. Eagle-eyed fans will have seen the initiative’s logo on HTC-Columbia’s jerseys during the Tour de France. For many people, especially children, affected by such a traumatic and life-altering situation as that brought about by illness or bereavement, it’s a comfort to know that you’re not alone. This initiative tries to provide some back-up and respite, to try and make the pace and shield you from the wind of the hardest race when you really need the help.

To see more about the six bikes you could bid for, check out Principia’s page devoted to the project. The entire auction profits, the whole 100% total, will go to the charity. 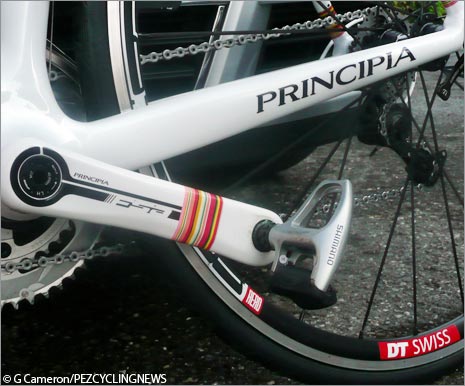 You can also find out more through Om Sorg’s website: which also has bracelets available, just like the one being attached to Bernhard Eisel prior to stage nine of the Tour to Saint-Jean-de-Maurienne. 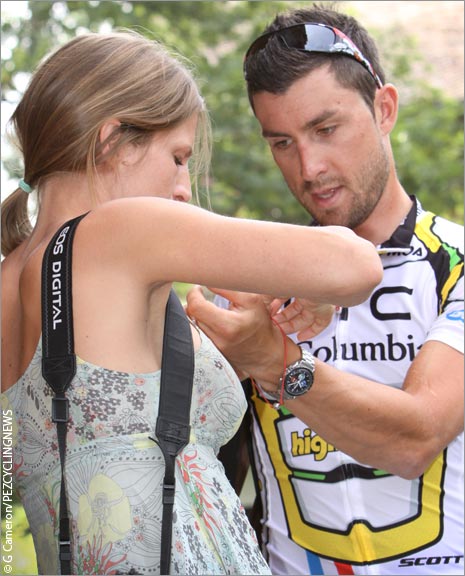