PEZ correspondent, Pascal Orsini, was on the loose at Paris-Nice with his trusty camera, and unlike most who aim for the riders and their steeds, he took the interesting perspective of focusing on the team cars. PEZ gives you the up close and personal of all of the 20 ProTour team cars – yeah, that includes Astana and even Unibet!

Two weeks ago, Paris-Nice was my first 2007 target to have a look and take photos for my own blog. At first I thought I might only get pictures of French team cars, as the race was in the middle of the UCI/Grand Tour power struggle, but eventually Paris-Nice was set to run as the firs ProTour race of the season. This was in fact a very good thing, as I’ve been negotiating with my camera dealer for quite awhile about testing a new digital reflex camera!

So here is a quick pictorial review of cars from the Pro-Tour teams, and check out what has changed since last year. 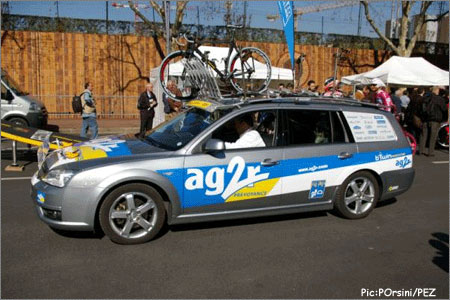 ASTANA – SKODA OCTAVIA COMBI
Skoda has been the official partner of the Tour de France and A.S.O. organized races since 2004. The VW group brand has been enlarging is sponsorship through the years and is also sponsor of Giro d’Italia and RCS races.

The policy is to directly sponsor one team of each country. So, Astana settled in Genиve is equipped by Skoda Switzerland. Astana was driving Audi last year taking over the Liberty Seguros team. 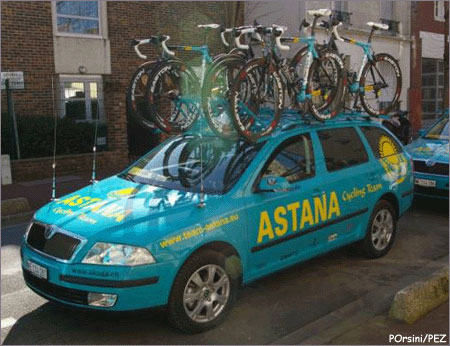 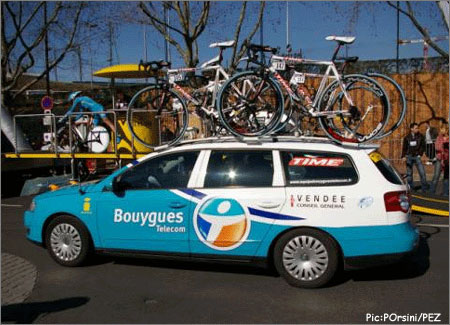 CREDIT AGRICOLE – SKODA OCTAVIA COMBI
No change, note that this photo was taken during the last Tour, I missed that one at Paris-Nice prologue. 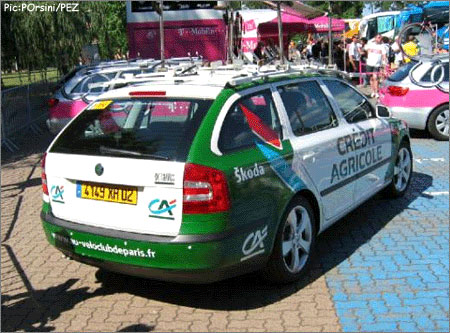 COFIDIS – VW PASSAT SW
This is the second French team using the VW PASSAT. With SKODA being part of the VW group we can assume there are some incentives for the team using VW cars. Just lek the unchanged Cofidis’ jersey, the car decals are the same for ’07 too. 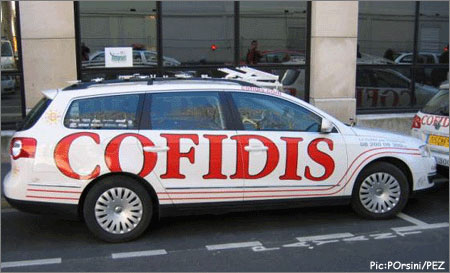 CSC – SKODA OCTAVIA COMBI
Same as last year – and don’t you love a car company that gets behind racing lke Skoda? 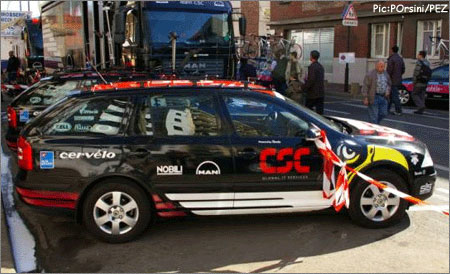 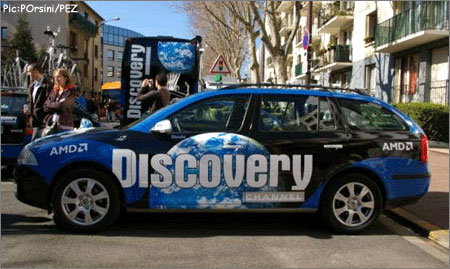 EUSKALTEL EUSKADI – SKODA OCTAVIA COMBI
Euskaltel was driving a RENAULT Laguna last year. But it makes good sense to be like everyone else when a car sponsor with a serious budget comes calling. 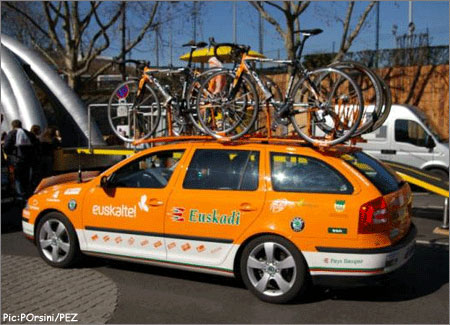 FRANCAISE DES JEUX – PEUGEOT 407 SW
On the other hand, Franзaise des Jeux change from Skoda and VW to the Peugeot 407. 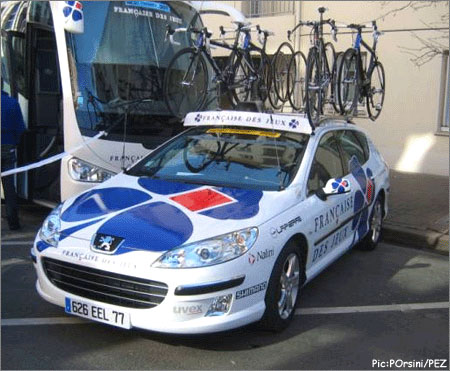 CAISSE D’EPARGNE – VOLVO XC70
A Spanish team with French sponsor and a Swedish car, that’s the European Economic Union at work… The car is the same as last year with some changes on the stickering – no more Illes Balears. 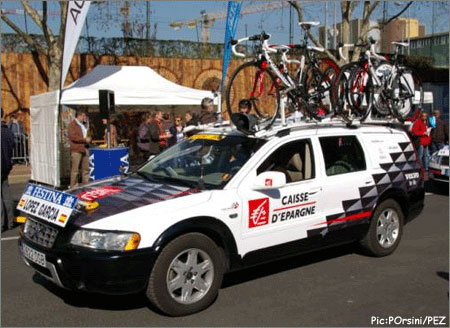 GEROLSTEINER – SKODA OCTAVIA COMBI
The water boys’ car is the same as last year with slight modifiations on the covering. 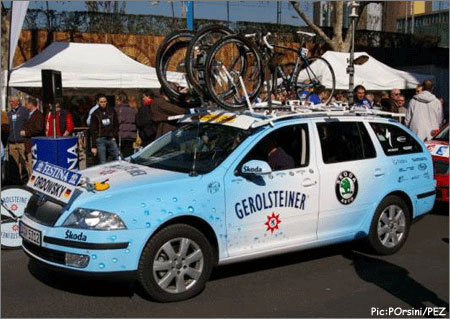 LAMPRE – SKODA OCTAVIA COMBI
Lampre is still using Skoda Octavia Combi. On Paris-Nice, both the new one (white skin) and old one (grey skin) were on the road. 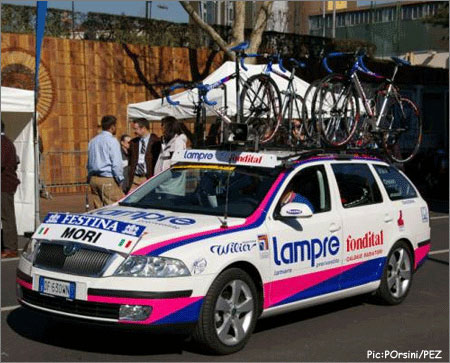 LIQUIGAS – FIAT CROMA II SW
Here’s some national unity for you – Liquigas remains with FIAT as last year. The deco has changed together with the team jersey. There’s no missing these guys. 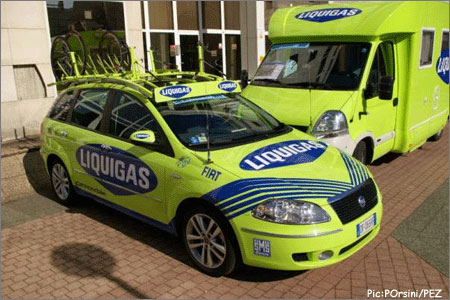 MILRAM – SKODA OCTAVIA COMBI
When the deal is good for both sides, there’s no need to change from last year. 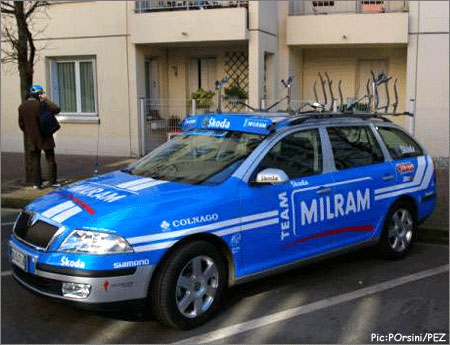 PREDICTOR LOTTO – SKODA OCTAVIA COMBI
With a slight change of sponsor, Predictor has replaced Davitamon. The car has changed from a Peugeot 407 to a Top seller in cycling automotive industry… a … wait for it …. Skoda! 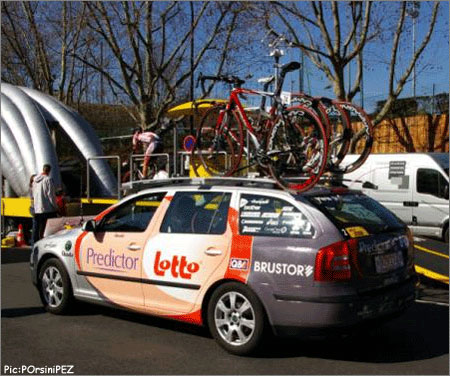 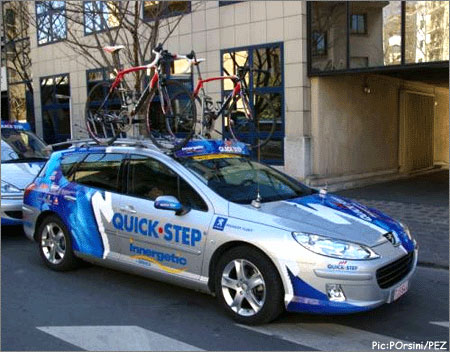 RABOBANK – SKODA OCTAVIA COMBI
No change for the Ducth bankers… sounds about right. 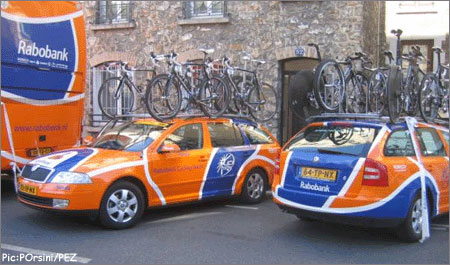 SAUNIER DUVAL – HONDA ACCORD TOURER
Saunier Duval was driving Mazda some years ago. Last year they were supplied by Skoda. For 2007 they’ve returned to Japanese cars. 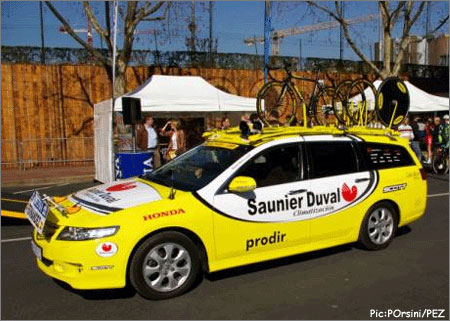 T-MOBILE – AUDI Q7
T-Mobile’s AUDI is exclusive and with several different cars: the A6 Break, Allroad and this Audi Q7 4WD (don’t look for this baby on the roads at Paris-Roubaix though – the ASO have strict rules limiting vehicle traffic to ‘light’ vehicles (ie: no SUV’s).) 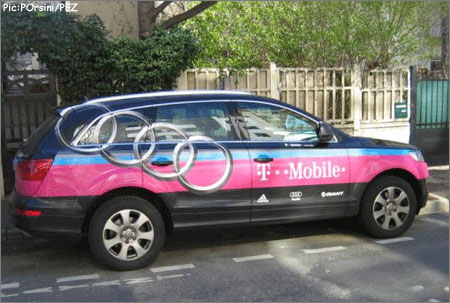 UNIBET – BMW and HYUNDAI
Unibet was not at Pari-Nice after not being selected by A.S.O. Thank’s to Harry who left a message on my blog, I submit his photos from HET-VOLK at the beginning of the season.

Unibet is driving the new BMW Series5 Break and HYUNDAI Santa-Fe. According to Harry they also had an OPEL Vectra.

Unibet is a motor show on its own – and it will continue. Due to the non-possibility to race with Unibet logo in France (Franзaise des Jeux has a monopoly on lotteries and betting), the team will race with a new jersey and a new name (CANYON) in France. Let’s see if they change up the car clors to comply… 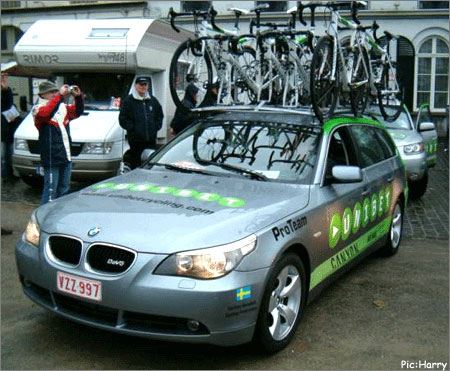 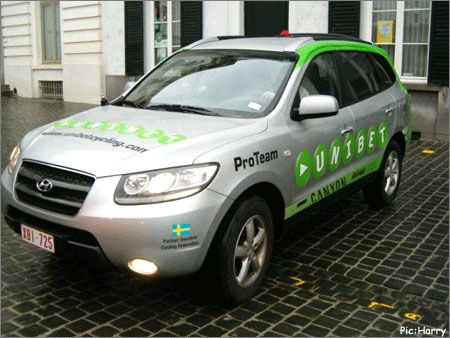 There you have it – maybe not the widest selection of car brands we’ve seen in the bunch, but as always a colorful parade of team colors guaranteed to draw ooh, aahs, and respect anytime they roll into town.

Magnus Maximus: Back To Strength