When PEZ fan Tom Staniford contacted us about his friend competing in the Deaf European Cycling Championships we were intrigued. Firstly we didn’t know it existed but then when we were impressed by his story and the high level of competition on offer. Here’s the story of the UK’s Tom Smith who took on the big nations with bug funding at the recent Deaf European Cycling Championships!

Deaf Cycling, whilst a small area of cycle sport, is rapidly growing in popularity. Supported by its own World Championships, European Championships and cycling events in the Deaflympics it continues to gain more interest in both the hearing and deaf communities.

Deaf athletes, for funding and logistical reasons, generally complete only on road bikes. Although certain track-styled events feature in major championships, the majority are all held on the road using local road circuits or an outdoor velodrome if one is located near to the host city.

Tom Smith, a former GB junior rider before a back injury impeded his progress, travelled out to Togliatti, Russia to represent Great Britain Deaf Cycling in the European Deaf Cycling Championships – the first rider to represent Britain in these events in over 30 years. Running between the 8-16 September 2012 the Championships featured a Sprint event, a Points Race, a Road Race and a Time Trial. Lacking a dedicated Time Trial bike to let him properly contest the final event, Tom entered only the first 3 events.

The first event of the European Championships was the Sprint which compromises of a timed 200m time trial, much like on the track, but taking place on the road. With slightly heavy legs from travelling and little specialisation for this event Tom delivered a solid 4th place qualifying time.

After the initial rounds Tom competed again, this time against Steve Toubol of France in the Quarter Finals. He was overcome by the Frenchman’s flair for this event in 2 heat wins against his one. 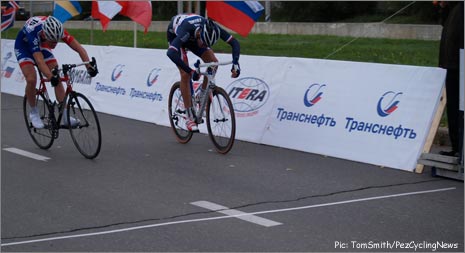 Tom was just pipped on the line in the Quarter Finals

In the 5th-8th place ride-off Tom decided to modify his tactics slightly, counting on his superior fitness to have left him less fatigued than his competitors from earlier exertions. He attacked early, about 600m out, and won by 5 bike lengths- taking 5th place in the event.

The 50km Points Criterium was held on the same circuit as the sprint a few days later. Comprising essentially 2 long straights with two sharp hairpin bends, it was a course which suited the stronger teams- of which there were large contingents from Russia, Germany and France. 2 riders from Czech Republic, 1 from Belgium and Tom Smith completed the mix.

After an aggressive start which saw Tom take the first two sprints and come 2nd in the third sprint the bigger teams started to work together to deny him any further points. Sadly, the combined power of the stronger teams on the front finally dropped Tom. But, mindful of his strong collection of points, Tom continued to plough on, completing the final 28 laps (33.6km) solo in a nail-biting chase to avoid being lapped by the front group. With a fierce headwind down the back straight it was a long and extremely courageous war of attrition which earned Tom a great deal of enthusiastic respect from the home crowd and his competitors’ support staff.

With some skilful pacing and a great deal of grit he managed to stay ahead- finishing the race just 3 bike lengths ahead of the assembled chasing teams! This earnt him equal points as a Russian rider, with the Bronze medal going to Tom on count back. A dazzling and very well-deserved reward for an impressive solo effort in difficult circumstances. Not everybody finished the race.

Tom proudly stood on the podium after a countback awarded him 3rd place, preventing a Russian whitewash.

Tom’s final event was the Road Race, which took place in a balmy 27 degrees Celsius in contrast with the 11 degrees experienced in the Sprint and Points events! 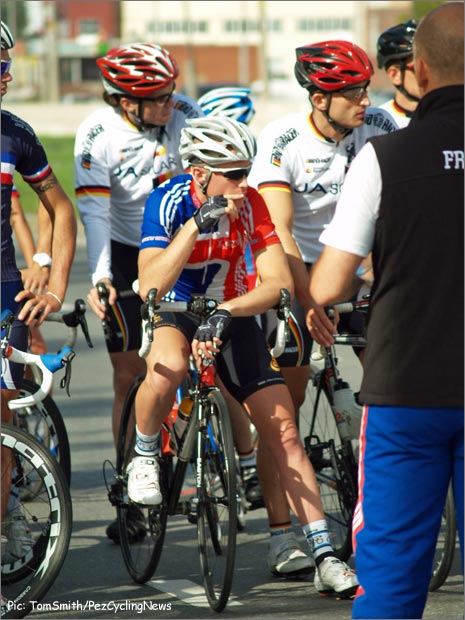 Gotta love those socks! Yes, Tom rocked some genuine Pez socks through the road race to deliver another great result.

Once again the ‘home’ Russian team performed strongly, working well together to protect their interests. The strong French team also made several bold audacious moves, but these were quickly shut down by the Russians and Germans. Having watched these moves carefully Tom decided his best option was to sit in and conserve energy.

This proved to be a wise move, as late attacks from the German and Russian teams effectively obliterated the peloton. Working hard to fight for position, Tom picked his way through the fractured bunch to chase the final moves. After chasing the leading Russians and Germans from 400m to go he was just pipped on the line by the current World Champion, Toubol- giving him a solid 6th place to go with his previous results. 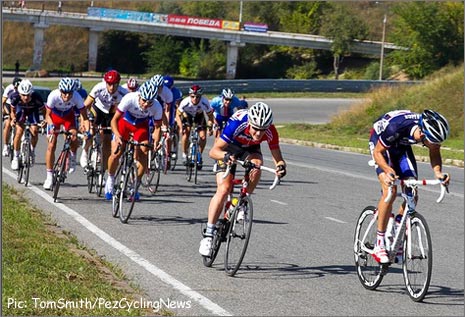 Overall the European Deaf Cycling Championships were a fantastic week. The Deaf Cycling community would appear to be very tight knit, but were extremely welcoming to Tom and he has made many new friends and learnt much to be put to good use in future World, European and Deaflympic cycling events. Sadly, in contrast to the German, French and Russian squads Tom receives no funding at all from his own Government. Fully self-funded and self-supported, Tom paid for the flights, entries and accommodation for himself and his father (soigneur) out of his own pocket. The fact his competitors had full-time soigneurs, coaches, mechanics and masseurs only serves to make his hard-fought Bronze medal, 5th place and 6th place in the 3 events he entered all the more impressive.

Tom would like to send a message of special thanks to a few people, without whom he would not have been able to attend the European Championships:

– Paul West at British Cycling for the Great Britain skinsuit and gilet.
– Stefan Tabea of Helvetic Airlines for the gift of free flights via Zurich. Unfortunately Tom was unable to use them as the journey would have required a 3 day trip to get to Russia.
– Continental Tyres UK for quality tyres and bibshorts.
– Thorsten Heyd the German Team Physio for the massage.
– Jan van den Braembussche and Jean-Pierre Fauconnier of Belgium for their help in the technical meetings and translation.
– Alex Wharton for his time and help with derny training in the weeks prior to the championships.
– Last but certainly not least, Anne and Ian Smith (parents) for their support, especially Dad who had the job of mechanic and soigneur.

Tom’s next biggest events are the Tour de Formosa (Taiwan) in November and the Deaflympics in July 2013. Tom also has plans to return to the Elite ranks in 2013. If anyone would like to sponsor Tom please visit deafcycling.wordpress.com or email [email protected]