I got into Oudenaarde in the evening after twelve hours on the train and no sleep the night before. So of course, I checked into my room, jotted down some directions, and was out riding faster than you can read this first paragraph. Check out my first ride in the Vlaamse Ardennen!

The thought of getting up at 330 in the morning to get ready to catch a train at 430 is devastating to me. It’s impossible. It’s comparable to me slam dunking. Ain’t gonna happen. So, to fix the unfixable – we just didn’t go to sleep. That’s all well and good, but 12 hours later I arrived in Oudenaarde, bleary-eyed and hurting.

Peter Easton of Velo Classic Tours (you’ll be hearing more about and from him over the next 10 days) called up his friends over at the Hof ter Kammen in Oudenaarde and got me a fantastic place to stay. I walked into a cyclist’s dream house, took one look at the map with its innumerable bergs, and I ran upstairs to get ready to ride. 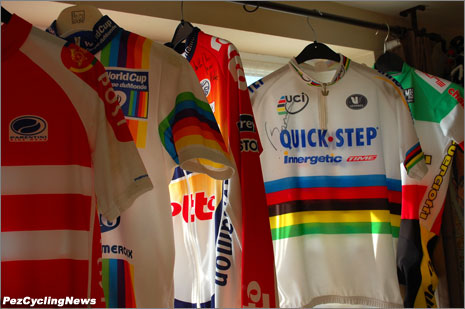 The Hof ter Kammen is a repository for all things Flanders cycling.

I had a hard time with the map at first. I had one climb in mind and I couldn’t find it anywhere: the Koppenberg. I scanned from top to bottom, but I couldn’t find it. Then I looked at where I was staying, just outside of Oudenaarde, and right next to that was…the Koppenberg. The Koppenberg is the closest of the hellingen to the Hof ter Kammen , and by close, I mean that it’s less than 2 miles away.

I found the bike path, and started following the number signs that litter the landscape of the Vlaamse Ardennen. It’s a great idea – you get the big area map, and now it’s a ride by number thing – pick the numbers along the route that you want to ride, jot em down on a piece of paper, and you’re off. 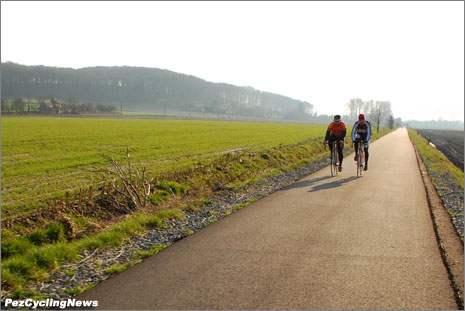 How’s that for a bike path?

Of course, this was much too complicated for me. More on that in a little while. So I’m rolling along the bike path was a hurricane for a tailwind, I pass two riders, hi hi hi! No wave, no recognition, not even a nod, or a grimace! A little frown crossed my brow, it’s ok, it’s ok. Don’t get mad. They know not what they do. 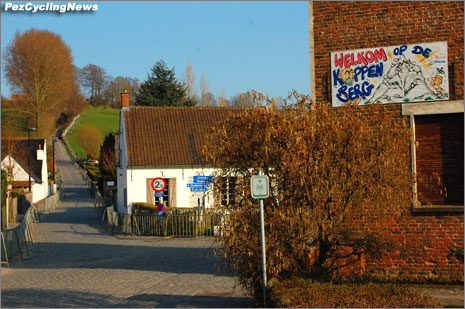 About four feet later, I forgot all about it, because lo and behold, there’s the Koppenberg. Oh my. That does in fact look steep, and those cobbles are in fact…well, bumpy. 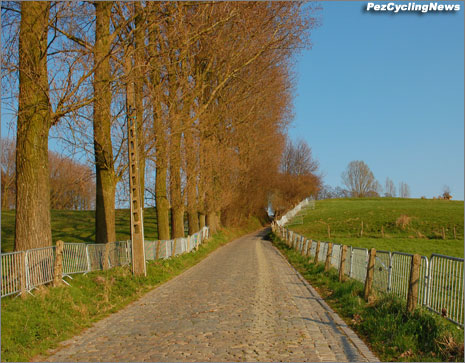 The whole taking pictures while riding thing didn’t work so well on the boulders (some call them cobbles) that make up this road. I did manage a few though, a testament to my dumbness, nothing more. 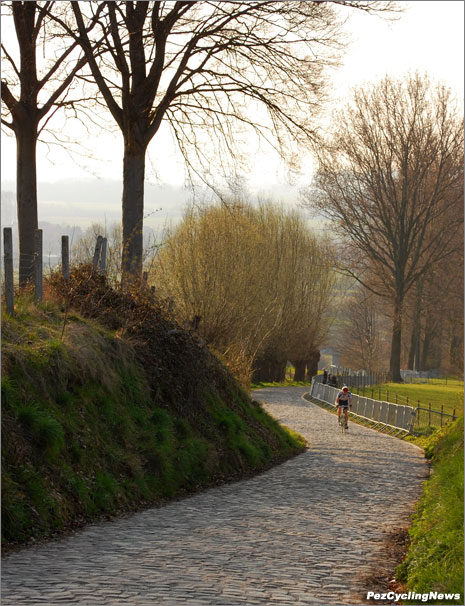 Yep, it’s steep from this angle too.

The actual climb? Don’t shoot me for saying this, but it’s short. I mean, it’s hard, it hurts, but it’s over really quickly. I like that. Maybe my perspective is a bit skewed now after being in Austria and riding in the Alps so much. The Koppenberg is steep, it’s nasty, it’s tough, but she’s gorgeous. It’s a special place. If you don’t stop the first time that climb comes into view and rears its nasty head: take up another sport. 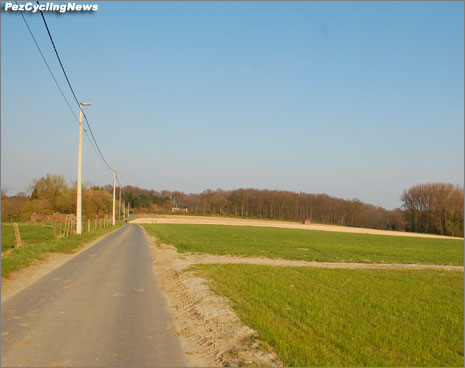 You should almost be able to hear the wind in this picture.

The hardest part though? I’m no Tom Boonen or Pippo Pozzato, but I have done a few bike races, and I do know that one thing sucks more than anything else: crosswinds. The air around the Koppenberg is still as you climb it. I almost didn’t notice that the only sounds I could hear were birds chirping, my breathing, and my bike creaking…no wind. Then I crested the top and, oh yeah, there it is: the howling. The wind is pretty close to never still in Belgium, so when it is, you can usually be assured that it’s waiting for you somewhere nearby, and sure enough, the wind awaits the poor racers over the top of the Koppenberg. After surviving the insane fight for the front before the climb, making it through the climb itself (no small feat), the slight shoulders of the bike racer will now feel the brunt of being guttered for the next little while – probably until the next berg. 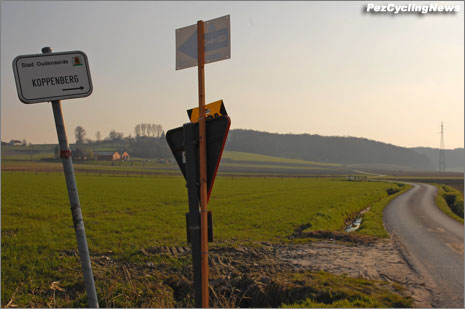 I had done well up until this point, which means it was about time for me to get lost. And that I did with ardent fervor. I was hell bent on riding the Steenbeekdries next, then working my way back along the Schelde so I could do the Oude Kwaremont (my room’s name at the Hof ter Kammen). 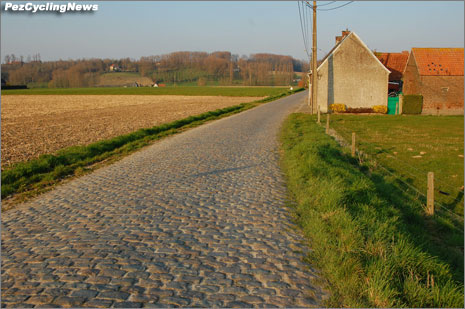 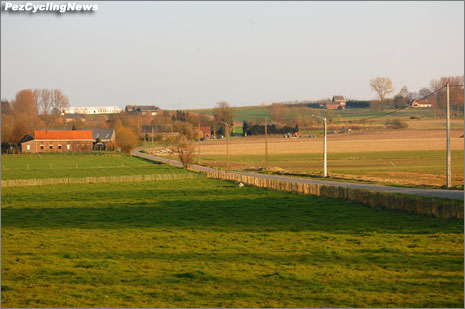 Looking back at the cursed cobbles. Yes, it was a very short section.

Some use the term – bone rattling. No, no, no. There is no rattling of bones. It’s a whole body vibration. Your spleen, pancreas, liver, hell, all of your internal organs are shaking. My calves were vibrating, my arms suddenly felt like they had gone flabby, my fingers hurt. I tried that whole, hold your bars light thing – no sir. Hold on tight and pedal hard. You’re kind of forced to pedal hard, because they’re not a whole helluva lot of fun, and it does behoove one to get to the other side quickly. Then again, when you’re done and you re-emerge onto at least 20th century paving techniques, you get to enjoy the brilliant tingling sensation your body experiences when you go from jackhammer to smooth. 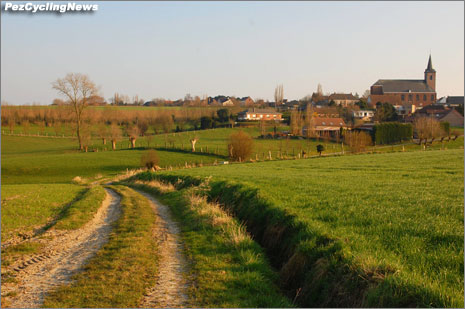 When you’re done with the whole cobble thing, you can graduate to the next level: not road at all. At least that’s what I did. I ended up on some random farm path that turned to dirt, then nothing, then back to pavement. They’ll use this section next year for sure.

The best thing about riding hard and fast is that things happen so much more quickly. If you get lost, you always have two options: get more lost or get back on track, and if you’re riding hard, you can do it…quickly! So this means that I often get very lost in a very short amount of time. There was a little pebble of reason rattling around in my head though, and eventually it occurred to me: those little number signs are there for a reason. I resigned myself to the fact that the only way to get around when you don’t know your way around is to follow the number signs. Do not stray from the number signs, Jered. Ok? Ok. 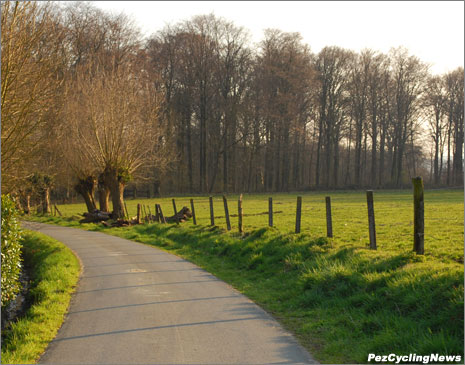 Once I started following the number signs, I was treated to this…

I had no idea what I was looking at though. I rode up a pretty hefty climb at one point, but I couldn’t tell you where I was, only the Gods and Google Maps know that. I will guarantee that it ends in -berg or -dries though. 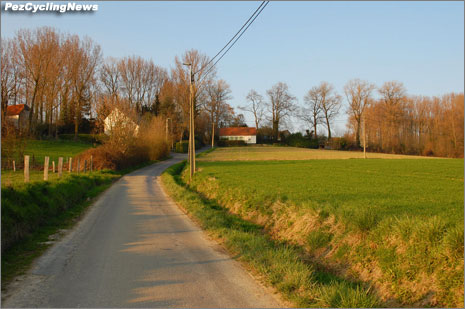 After I got over Unknowndries, I emerged onto one of the finest stretches of road I’ve ever heard. I mean seen. My ears are still ringing from whatever Belgian wind is called. Wind does not do it justice. 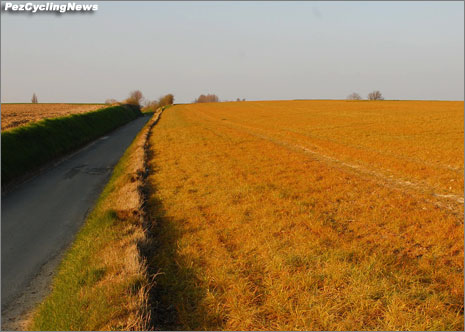 That’s a pretty field right there. 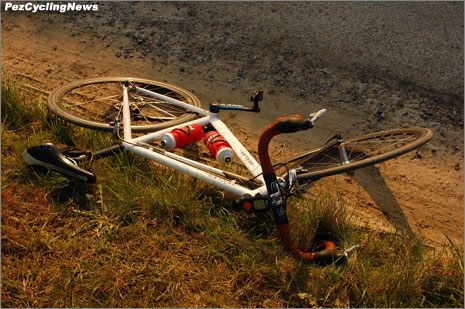 Not long after that, I came across an utterly bucolic scene, and instinctively knew there must be something sinister nearby. All of this prettiness demands equality – ok, ok, show me the cobbles. 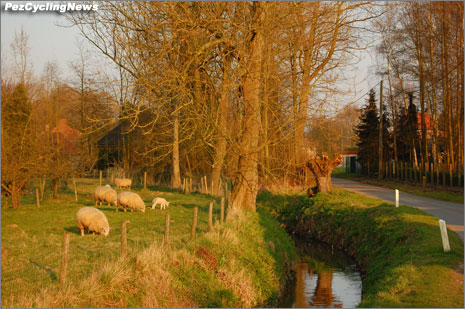 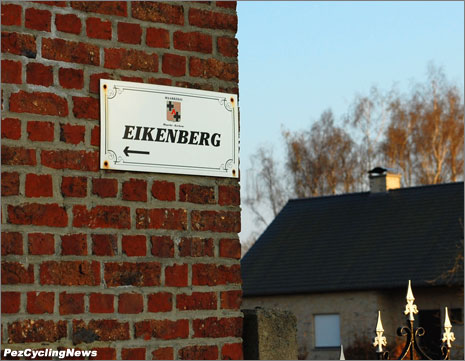 Yep, I knew it, cobbles have to be nearby. 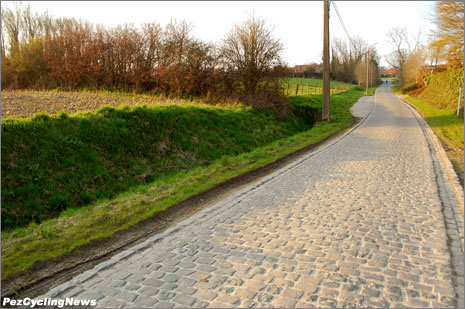 The Eikenberg, as I later came to find out, is returning to De Ronde this year, and it’s a worthy addition. The section is over a kilometer in length, pitches hard, and generally just plain hurts, which means it’s perfect.

My nemesis enters the stage at this point. He passed me while I was taking pictures of the Eikenberg. He didn’t say hi or wave. I did both. Strikes 1 and 2. Of course, when I got going, he was far ahead, but no biggie. I caught him. He attacked me. Seriously. He turned around, looked me in the eyes, Lance-style, and attacked. This irritated me greatly, but I followed him and took pictures patiently waiting for him to crack. He did. I rode away with a smile, wave, and another hello. Take that. 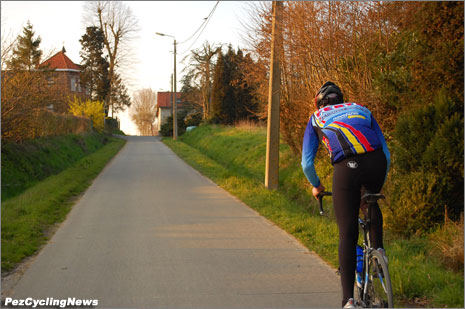 It was around this time that I encountered some real cobbles. I had left Rider X far behind and I was feeling pretty chuffed. Showed that guy. Yeah. Oh dear God what is THIS?!?! Those are cobbles. They were big, oddly shaped, placed haphazardly (they do have great beer here by the way), and seemed to go forever, ok, they did go forever. 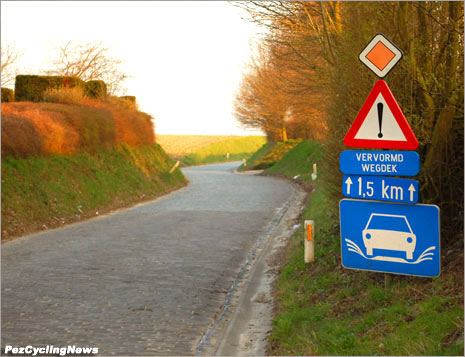 Pictures do not do the cobbles justice. Not even those pictures where you’re on the ground with the rocks. Nope. How do you convey a shaking that vibrates your duodenum?

The only thing to do here, of course, was to ride hard, and say bumpy over and over long-style, so I could let the cobbles work their magic and make me laugh. Laughing sounds funny on cobbles. 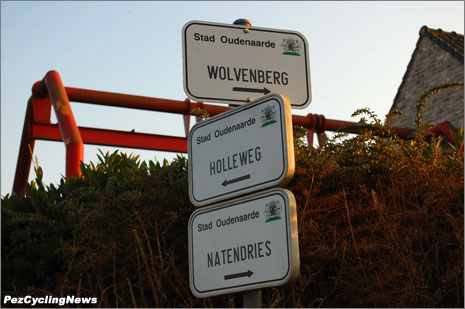 Since I came in from the wrong side, I had the pleasure of descending that which I was about to climb. I noticed that I got going really fast somewhere around the middle of the climb, and thought to myself, self, that has to be really steep. Sure enough, when I turned around, there was a triumphant little bastard of a sign announcing that the hill was indeed steep: 20% it gloated. 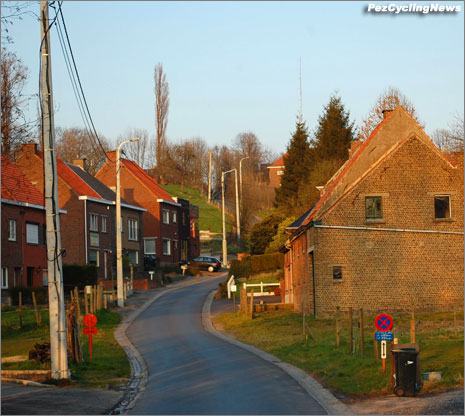 Looking up the carnivorous sounding Wolvenberg. 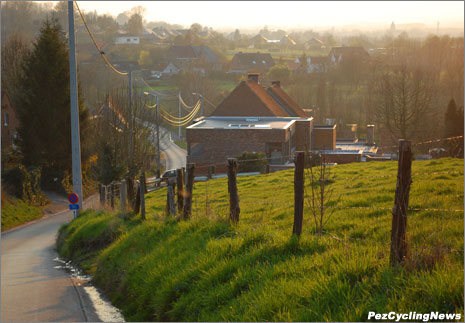 Looking down the Wolvenberg. 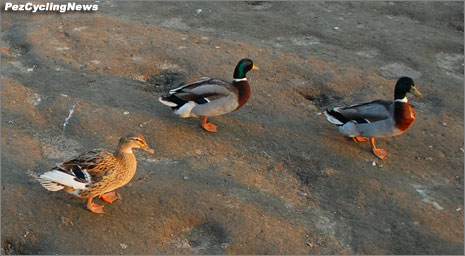 Looking at some ducks off to the side of the Wolvenberg. The climb later ate them.

I rode up it. It was steep. What else is new. Oh yeah, something else that’s not new – two more riders passed me without a wave, nod, wink, or a word. That got me fired up again, so I caught them, allowed them to do their whole, Vee are faster than you, you peon. Then I pulled up even and let them go as hard as they could till they attacked. Then I rode away, with a smile, wave, and hello.

In conclusion: Will somebody please be nice to me? Please? 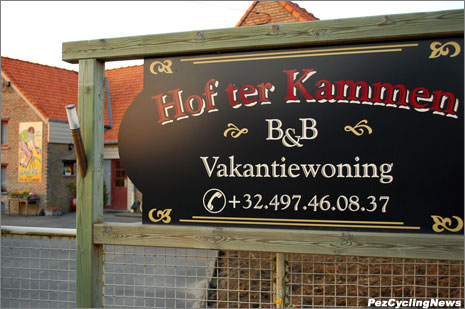 The Hof ter Kammen is fantastic. I just wrote you this report from the Oude Kwaremont room. Life could be worse.