Tuesday – Belgium: It’s been a battle all the way up from Beauvais to get decent sounds on the car stereo; but the minute we cross the border into Belgium, we find ‘Joe FM’ and The Pointer Sisters – ‘Fire,’ that’s better. We’re on our way to Ghent-Wevelgem!

We were up at 03:00 to get the 06:40 flight out of Prestwick, over on Scotland’s west coast; the flights to Charleroi didn’t match our, ‘in on Tuesday, out on Thursday’ programme for Gent – Wevelgem, so Beauvais it was, and a long drive through depressed northern France. 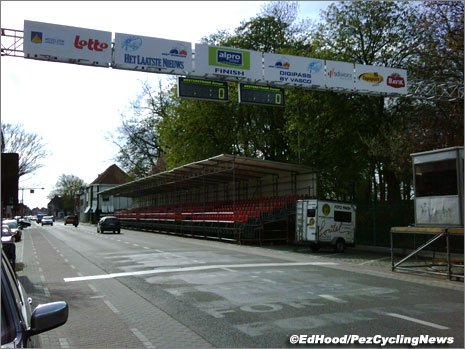 The finish line was a tranquil place on Tuesday.

‘Kruishoutem’ says the sign and we head down the slip road to find ex-Cofidis pro, Chris Peers’ bar. 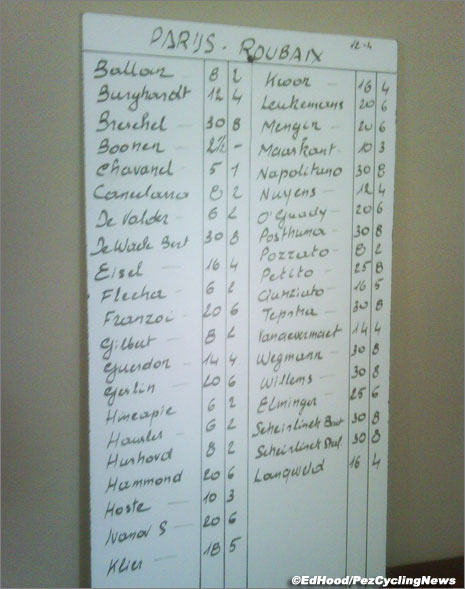 The bookies board is on the wall for Paris – Roubaix and Boonen is hot favourite on short odds; no surprises there.

It’s Tuesday, but Monday’s paper is still on the bar; a full colour image of Stijn heading for Ronde glory fills the front page of the sports section – soccer? what’s that? 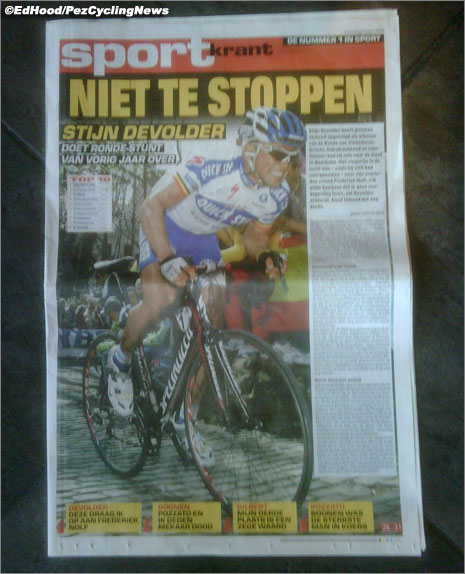 Oudenaarde, and it’s frites time we decide to go for a ‘groeten’ portion, the ‘super’ is only for real pro fried potato eaters. 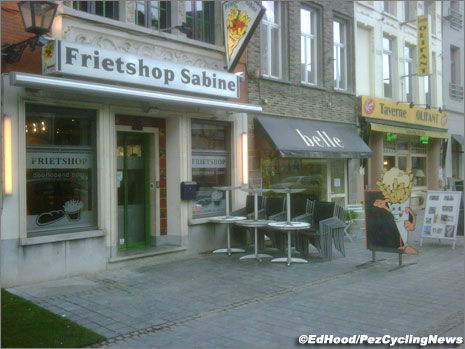 Bodies duly contaminated, we head down to the Tour of Flanders museum, where I’m on a quest for ‘Velo 2009,’ – the reference ‘bible’ if you’re a cycling journo. It used to be available via a specialist in the UK, but not anymore – I pluck the last one from the shelf, grinning from ear to ear. 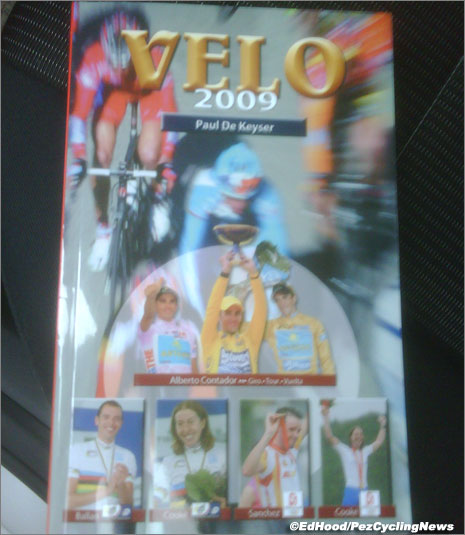 The 27 euro price tag makes my compadres flinch; but I know a bargain when I see one. 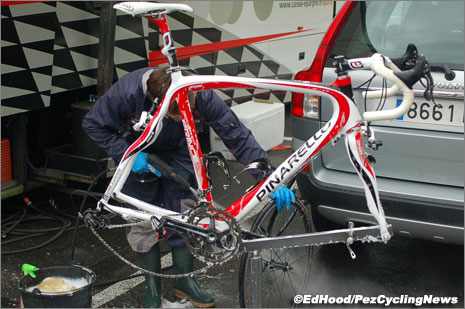 Their mounts are respectively, Lapierre, Look, Pinarello, BH and Giant. 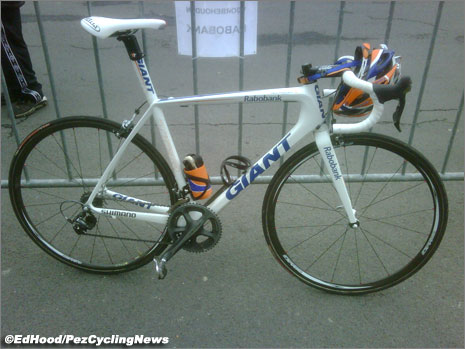 The Pinarellos are gorgeous, but a bit too multi-coloured for us: we approve of the workman-like Lapierres and BH, but our faves are Rabo’s lovely white Giants.

There’s a whole squad of VIP’s around the Rabobank truck and former multi classic winner, Hennie Kuiper is pumping out that PR like the good pro that he always was. 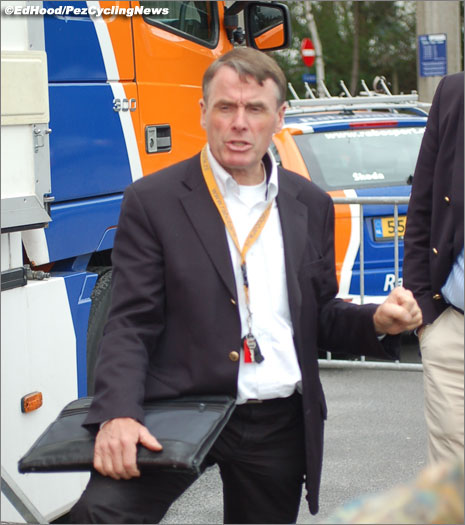 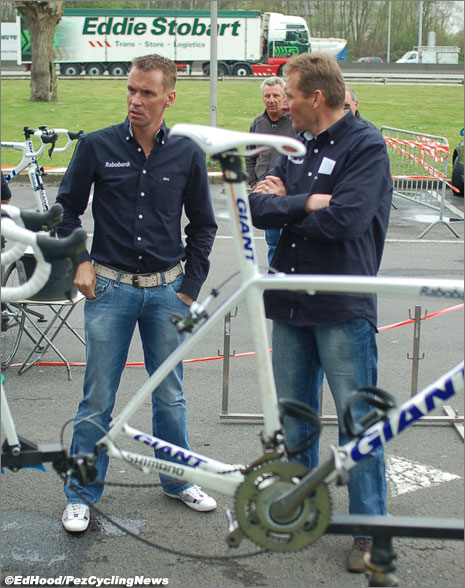 “A lot will depend on the weather tomorrow, if it’s windy, it will split, for sure, it will probably be a group of 30 or 40 who contest the sprint, if it is, we hope to have Graeme Brown up there. Yes, the other teams will make it hard for Cavendish, but if he’s still there, he’s still there!

Sunday? Paris – Roubaix is one of the nicest races of the year, one that I like a lot. The strong teams all showed in Flanders – Cervelo, Quickstep and Rabobank. I think Langeveld will be involved in the final, but for him to win is difficult. Flecha will be our main man, he was very strong, but had bad luck in Flanders, with a crash and a puncture – he’ll be there on Sunday.” 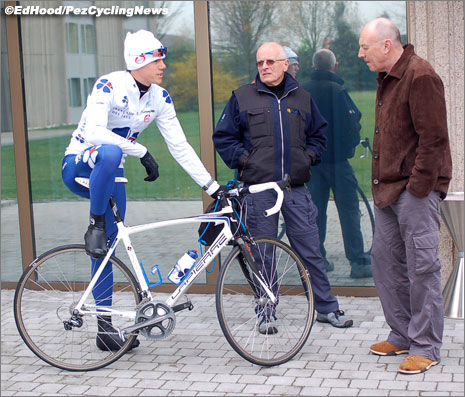 The riders had been out for a run and back for a few hours, most of the bikes had been cleaned – the mechanics were already thinking about dinner; but one man was just heading out for his ‘leg loosener” – F des J Kiwi, Tim Gudsell.

“I’ve just arrived, I have haven’t raced since the Tour Down Under, where I broke my collar bone and elbow. I’ve been in rehab ever since – my shoulder and elbow still hurt and I knocked my hips about so much that it’s started sciatic pains.

It’s been the bane of my life, I’ve hardly ridden for the last two weeks – to tell the truth, I’m just here to get the team up to the minimum number so they can start. I’ve had four or five doctors on my case but just in the last few days they think they’ve found the problem.

It’s good to be back at a race; my life recently has been the doctor’s couch, the gym and the sofa!

Our man for tomorrow and Sunday is Anthony Geslin, but for Roubaix, Fred Guesdon (former Roubaix winner) is back, he had a crash in the Tour of the Algarve, but he’s on the way to recovery, now.

I’d better make the most of being on the bike, I might be in surgery on Thursday!” 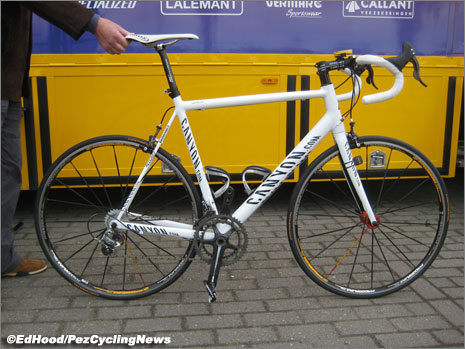 Over at Ghent’s other Holiday Inn, the mechanics were getting Leif Host’s Canyon ready for Roubaix – I just can’t get into those back sloping decals, but Viktor likes them.

Wevelgem and the Hotel Cortina to collect the creds for the car, the guy dispensing them isn’t chatty, but I do elicit his tip for tomorrow; “Cavendeesh!” Lesson learned on the car stickers, don’t put them on ’til race morning, otherwise the souvenir hunters will pinch them. 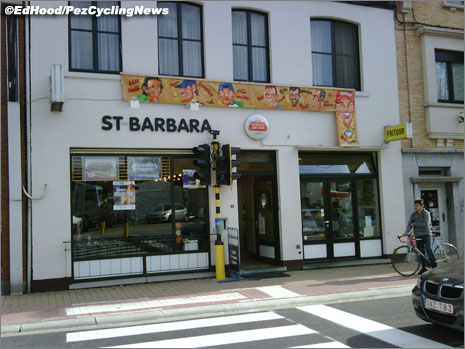 Wevelgem, Cafй St. Barbara is almost on the finish line, we have a pils – it won’t be so easy to get served tomorrow. 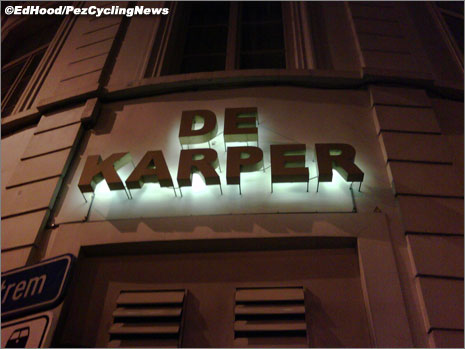 Jered can’t find our rendezvous and we’re starting to wilt – “catch up with you on the start line, tomorrow, dude.”

Ghent – Wevelgem in the morning, we’re excited, but even the trains running past the window can’t keep us awake, we’re so tired.