Once again, it’s season over time, and once again, it’s time for the annual Team Evil Chort Ride. A loosely organized, 100-mile, 10-bar, 2-day excursion. In its third year of existence, the Chort Ride serves as a celebration of another hard year of cycling coming to an end, and best of all – it really happens…

There’s no better way to start your off season off than with a little good old fashioned debauchery, and the Chort Ride provides ample opportunity for anything one’s mind can conjure up. No more races, no more intervals, just miles and bars. Oh yeah, and rock star treatment. When a group of black lycra clad dudes stumble into a hick bar in the Midwestern countryside, the whole mood changes.

Are these the actions of serious racers? Yes, they are, because after October 10th, we’re not racers any more. And this isn’t a race. This is a ride, anyone and everyone is welcome to come, so check your calendars for next year! This is about speed. In fact, there are speed penalties. You go over 20mph? You drink a beer at the next stop. You go over 25mph? That’s a shot of your choice. You’re only excluded if the speed is garnered as a result of a downhill.

This year’s Chort 100 had the pleasure of the participation of (in no particular order): Me, The Lunatic Fringe (our driver), Han, Fruit Stacker, Bear, Biddler, Trenti, and Warsteiner.

The Saturday morning of the ride left a lot to be desired. As Trenti and I sped down from Milwaukee, the in-car thermometer read an outside temperature of 41 degrees. It climbed all the way up to a balmy 46 by the time we hit Han’s house for the kickoff. Han was at work making our savory breakfast, so I started making Bloody Mary’s for everyone. Seemed like the right thing to do. A nice PBR (that’s yer Pabst Blue Ribbon- ed.) on the backside and you have yourself the perfect Midwest Bloody Mary, a true delicacy. We needed some extra warmth, given the ride would be in 40-degree temperatures, with 45mph gusting winds. We saddled up after chow and liquid courage, and got the route to The Lunatic Fringe, our driver for the day. His old Jeep would be salvation for us all in the vicious headwinds ahead of us.

The schedule is this:

Saturday’s start was cooooold. That’s it. Luckily, when turning west, we had The Lunatic Fringe to hide behind. And then of course, we had the safe harbor of small, Northern Illinois taps to take refuge in and recount a hard season’s work. Or, just drink PBR. Lots of it. If not PBR, look for a nice Old Style, or perhaps the High Life itself. We’re not into foofy beers here at Evil. People say, “Well, that isn’t safe!” No, people are right. Neither is crossing a busy intersection, or driving in Chicagoland traffic, or getting on an amusement park ride.

I’d rather take my chances with Team Evil and a cache of beer than any of those things. Besides, there’s only time for one or two before pressing on and metabolizing what’s in you. I fear our own good Dr. Cheung would admonish me for such activities, but alas, after living like a Mormon for months on end, a little blowing off of the proverbial steam is a pure necessity. One tap to the next, bracing the cold, making friends, stickering all comers, it’s what we do best.

Saturday came to an end with a stop at the quaint lake Geneva motel, a very Euro-style hotel with individual cabins, three beds per. Some of the braver soldiers went hunting for local talent. I, and the other half of the crew hit the rack, exhausted.

Sunday was the polar opposite of Saturday, with higher temps and bright sunshine. We also had the joy of favorable winds, as we all incurred speed penalties on the first leg of the day, stopping at Barry’s Bar to pay the piper. Barry wasn’t open when our motley crew rolled up to his door, but he opened early for us. We soon learned that Barry was also the Mayor of this town. I think it was Genoa City, it might have been Pell Lake. I really can’t remember. What I do remember is that he and his wife rolled out some seriously tasty Bloody Mary’s, far superior to mine the morning before.

There’s really something to be said for a good, safe, booze cruise with good friends. The weather sucked, the wind was harder than $40 worth of jawbreakers, but we had an amazing time. Wide open roads, good friends, cold beer, what more could any man or woman ask for? 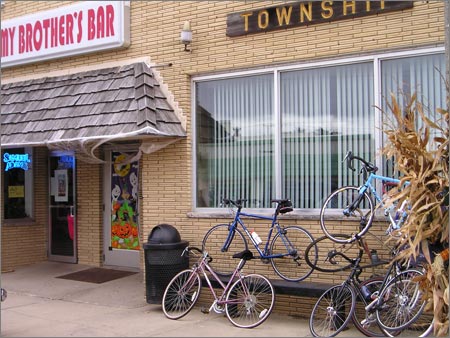 Chort Ride ’05, bigger than you. Write me for details if’n you be interested!
[email protected]