If there’s one thing I like more than seeing PEZ-Socks on the ankles of our fine readership, it’s an inspired plea to earn the revered prize: one that shows creativity, fore-thought, some good ol’ sweatin’ on the bike, and even a little groveling. So I was game when PEZ-Fan Mike Appel proposed his own way to earn some socks…

It all started innocently enough, with an email I recently received…

Dear Pez,
I am a 29 year old, unemployed (I quit), recently made single (she quit) cat 4 halfway to 3 bicycle racer. I was going to put a pair of your socks on my credit card, but I was overwhelmed with frugality and decided against it. So I would like to propose an unofficial contest whereby you provide one pair of XL black PEZ socks (that I will wear as often as possible on the bike) if I can get in the top 5 at this weekend’s road race. If I lose I will send you the pair of socks I raced in (laundered or not, your choice). You can even pick which socks I wear: grey wool Castelli socks, brown “Bike Geek” Twin Six Iso-wool socks, black Swift Wicks.

Thank you for your time,
Michael Appel

PS: This is my first attempt at “racing with panache.” Am I doing it right trying to make my own prize list? I don’t think Matt McNamara meant this exactly [in this recent ToolBox column], but there is no caution here.

So I responded:
“Hey Michael –
Thanks for the note – your plight and suggested solution is worth some thought.
But since any good offer deserves a counter, here’s mine to you:
Write us a story about your race this weekend (your ‘quest for socks’), get some decent pics to go with, and if I deem it Pez-Worthy, we’ll run it, and you get the socks. Heck – I’ll even throw in a white pair as well – !
What say you?”
– Pez 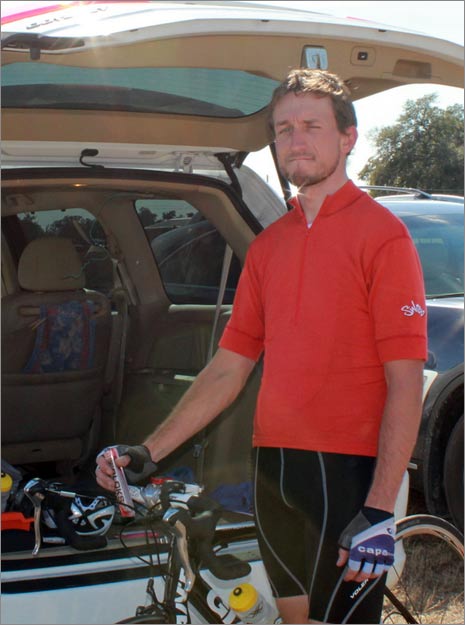 I’m a sucker for a good offer, especially when it involves kitting up an appreciative fan in some Pez-Socks.

Sure enough, the game was on and Michael was lining up the “Spring Fling” in Deland, Florida on January 29th – and here’s the story.

You could have waited for Groundhog Day to hear that Spring was on the way, or you could have just been at the Spring Fling of Cycling in Deland, FL. That groundhog, Punxsutawney Phil, read the race reports and figured with that many racers having that much fun in their own backyard it must be time for winter to hit the road. Warmer temps and sweet sunshine wouldn’t take long to get everywhere else. Winter did put up a bit of fuss for the organizers as early field starts were hampered by colder temperatures and some fog, but things got rolling fast when the Spring sunshine got things warmed up. I used to live here, and couldn’t wait till the opportunity arose this winter to escape the snow and ride all over Lake County again as a real snowbird.

The Spring Fling boasts two days of racing, but unfortunately we were only at Sunday’s road race hosted by the spacious Spring Garden Ranch in nearby Deleon Springs. The fields were a tad lumpy and played hell with the minivan’s suspension, but thankfully we can drive slower than we ride and didn’t break anything off.

Some teams did it up right sporting custom tents (yes multiple custom tents), and bike racks for fleets of bicycles. The early races were slated for 7:30 and the last fields (mine) rolled out at 2:30 so most of the people under the tents were definitely in the recovery phase of the day by the time we arrived. Sleeves were rolled up and shade was definitely a necessity for cooling down. Even the race officials were caught napping on the job. You can’t really blame them, though, the day was just getting to that sleep inducing side of sun and warmth combination. He’d probably been checking in riders since the pre-dawn hours as well. 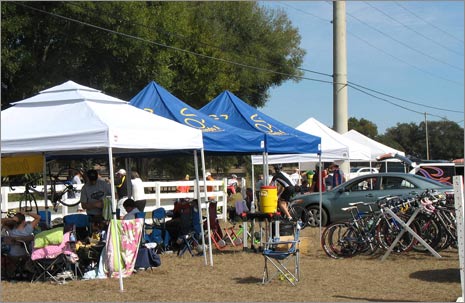 A few spare minutes before race jitters force you onto the trainer let me check out some of the women and master’s fields as they hammered by the start finish in front of the ranch. They were definitely feeling the spring heat in the 70’s. I felt better seeing locals sweating because I even had to setup the trainer in the shade of my van’s rear hatch while I warmed up. I started to wonder if this snowbird had brought enough water after a half-liter disappeared in 30 minutes, but thankfully it didn’t take long to get the legs going. I grabbed just one water bottle before rushing to the staging area (I would regret that). Never underestimate the beautiful Florida sun to make things feel hotter than they are.

The real meat of the day was spent on the 7 mile circuit around the ranch and outlying areas with full police rolling road blocks and completely open roads. No center line rule; we got to use it all up. A rare treat generally reserved for pros that makes local racing that much more fun. You sort of feel more elite when organizers pull this one off, or maybe that’s just my delusions of grandeur. This seemed important in the beginning because of the field size and general early race disorganization, but we all still habitually hung mostly to the right of the yellow line. 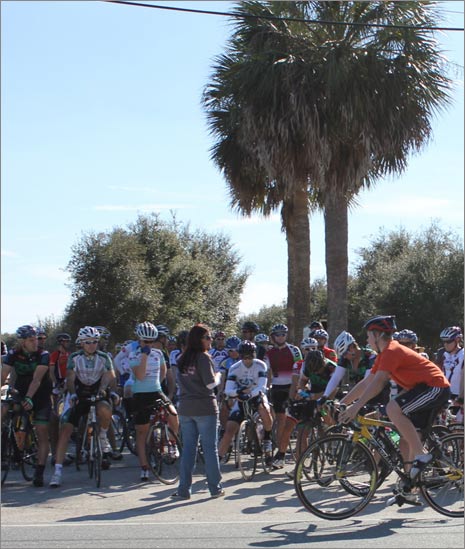 Some last minute rules from the commissars…

Attacks started rolling off the front almost from the get go, and being an unattached rider amidst many teams (several with good numbers) was not a fun place to be. You’re constantly trying to overcome the blocking of the teams, and about the third time someone from the green team rolls off the front and forces a counter you know they’re just tiring you out as they sit up and get swallowed back into the pack. Combine that with racing out of town, and you really have idea who the marks are. Who can actually make a break stick? That’s half the fun of going to new races and venues. Trying to imagine at the start line who is the local sprinter, and who can attack and stay away. Chase down too many of the wrong guys, and you’ll wind up gassed and useless sprinting for a pack finish. That’s spring racing, though, it’s not really about the fitness and the form yet, but the team tactics and reading the race. Southern racers don’t get a whole lot of fitness from early springs (they can even get burned out), but they do get a little extra practice with tactics if they play it right and pay attention. 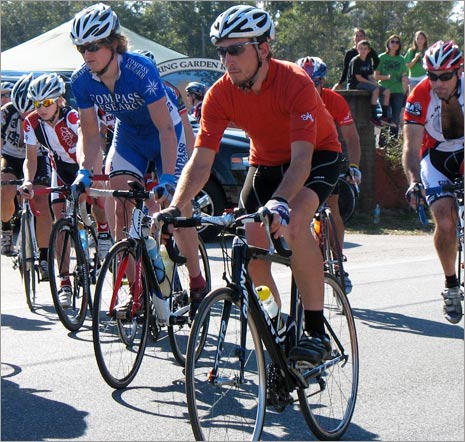 … and our hero gets underway.

Luckily, I did pick one guy right coupled with a warning from a member of a failing breakaway that his team was going to attack shortly after they caught us, and when he made his move I had to scoot past three of his goons to get on his wheel. Three other guys made the effort and finessed their way out of the peloton rounding out the break. We spent most of the race building our gap, and keeping it steady. We lost one of our guys to a flat. The wheel car was way back behind the main group so we unfortunately had to leave him behind and make do with four. We played it right, and we all worked hard. It was more of a team time trial than anything. Nobody was trying to escape the work, or pull off the front right before the windy section or hill (Yes, a hill in Florida we really have some!).

That’s the other great thing about local races. It’s not our job. We were all thrilled to be burying ourselves for three perfect strangers down some local country roads. At least until I ran out of water with a little over ten miles to go; I got kind of crabby about that. One of the guys in the break was on a big team, and had water bottles thrust at him every lap; I really considered stealing one of these but figured it wasn’t worth the annoyance it would cause. 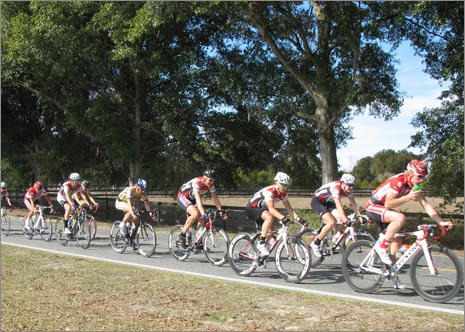 Hey fellas – you can use the whole road this time…!

The last lap saw our gap widen to almost two minutes on the field, and we gave it everything we had for one more go around the circuit. We still worried the peloton would get some kind of fierce turn of speed and come hammering by pushing us back into the obscurity of the lower pages of results postings. The pages where you put your finger on the first place name and run down the list looking for yours, and you go down and down and you feel the page breaks as you keep going until you finally see your name faintly because the printer was running out of ink. At least by this point, though, you’re so bent over that everyone else can look above you and find their finishes just fine. 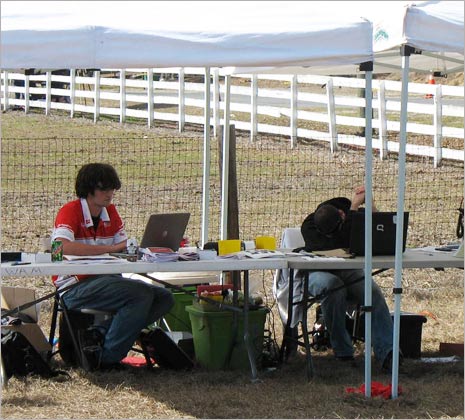 You gotta love score keepers who settle in for a nap during races.

Today would not be one of those days, though, and only two riders managed to bridge that minute and a half stretch of no man’s land (I had also marked these two, thanks much). There was one thing I could have possibly done when we hit a hair pin turn on my pull. I took it really fast, and immediately had several bike lengths if not more between myself and the others. I could have attacked, and I wonder what would have happened if I had. I would feel like a heel that’s for sure, but isn’t that racing? A pro would have attacked. A local? I guess not after spending most of the day with those three. In the end four out of the five (sorry Dave) in the break that stuck were sprinting for the line, but the top billing went to the two power houses that caught us with less than half a lap to go. 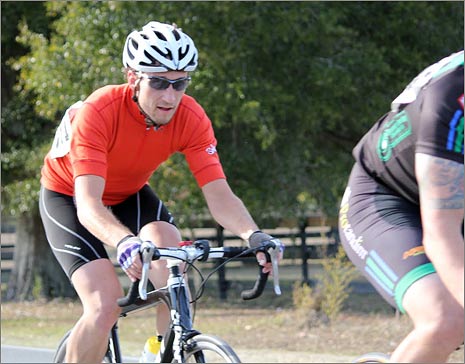 So the first official race of the spring here in Deland Florida went down mostly smoothly with a couple hard efforts at racing with panache, and hopefully some good people got some much needed starts in their Florida Points Series careers. We definitely got a jump on spring, and we are very grateful for that. Don’t worry, though, because like the groundhog said (after he stole the news from us): Spring is on its way, even to the north. I hope your local racing this year is plentiful, the entry fees are cheap, and the prize lists generous. Bring on the season!

The Final Verdict
I’m impressed by anyone who gets off their butt and actually does what they said they’d do – writing the story, that is. Nice work Michael. Now about those socks… judging by the pics you’re in desperate need of a head to toe make over, so I’m sending you a PEZ jersey and bibs, gloves & cap (plus the socks) to get your season off to an even better start.

All Roads Lead To The Copenhagen Six, Part One