PEZ Fan parker Holt suffered a scary crash at the early season Rosedale Ride in Austin. We’re glad to report he emerged from the ER with only big bruises, and will be riding again soon. The relief was clouded however, by the tragic loss of his new PEZ jersey to the paramedics’ scissors…

– As reported by Parker Holt –
The Rosedale Ride started out just about perfect, sunny and cool at the 8:30AM start with very little wind (Rare for Austin, TX this time of the year..) I was really looking forward to the ride since I hadn’t been on the bike nearly as much as I would like (But doesn’t just about everybody say that??)

PEZ Fan Parker Holt styles it up in his PEZ jersey before the start… is that envy we see in his buddy’s eyes?

The Rosedale is the kick off of the season of charity rides, and a fast course in the gently rolling hills east of Austin. Most of the road clubs show up to ride together at a fast pace, and it’s always fun to see all the roadies in all their gear. But there wasn’t a one there with a jersey quite like the PEZ jersey. We were having a great ride, averaging something around 19mph, not TDF speeds by any stretch, but a good start to the day.

A Good Day Ruined… Not to mention the jersey…
Having bypassed the first two food stops to get a bit ahead of the crowd we were starting to run a bit low on fluids so I mentioned to Barry that we needed to pull in to the stop to get some water. We were slowing to pull into the stop when I caught a glimpse of something in the road, and I was on it before I could react and the last things I remember were the handlebars turned full lock and the pavement heading up at an alarming rate to meet me! The image of the pavement coming up at me, and then the impact can only be described as the view from a cam-corder when someone drops it.

I awoke to several folks standing over me asking all kinds of strange questions like; Do you know what your name is? When is your birthday, do you know where you are?? Very fortunately for me, the accident happened DIRECTLY in front of one of the people responsible for first aid during the ride, a veterinarian named Susan Skyler. She was on the scene almost immediately upon me hitting the pavement and immediately started talking to and treating my injuries.

I was very confused and didn’t really understand what was happening just yet “why are all these people asking me if I know my name??” I wanted to get up and get back on my bike for just a second, but that didn’t work. They kept me talking for the 15 minutes or so it took the ambulance to arrive and the EMTs to start their work and assess the situation. The scariest part of the day was being strapped onto the backboard. (Even though I was pretty sure it was for precautionary reasons). I remember just a fragment or two from my time spent on the ground, but I didn’t really come to full consciousness until I realized I was in the back of an ambulance, looking up at the white roof and bright round lights. 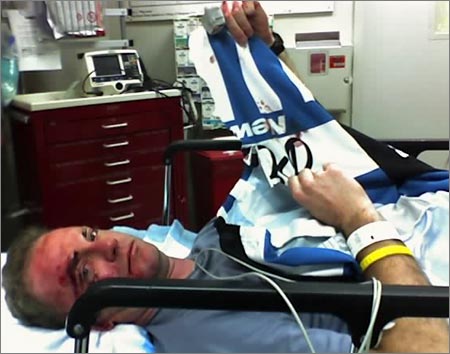 Hey – Not the JERSEY!
Once we were in the ambulance it was a relatively short ride to the ER. This was where my PEZ jersey met its untimely demise… I tried to stop them and have them let me take it off, but they would have none of that… Strangely though, they left a plain gray base layer I was wearing intact… I can only surmise from these actions that they must have been undercover Cycling News operatives and took out their ire on the symbol of their inadequacy… 😉 Despite this travesty, the EMTs could not have taken better care of me and I’m very grateful that they were there to help me out… It was frightening to be on the back board with a neck collar on to immobilize me completely, but once I proved I could wiggle my fingers and toes, I began to relax a bit.

Once in the ER I was told that my girlfriend Jennifer was already there, as was my sister and her fiancee’. I asked for Jennifer to come back and was very glad to see her and a bit emotional. I also learned how good of an idea it is to pack my insurance card, drivers license and a credit card EVERY time I go out to ride, whether alone or with a group. I keep them in a ziplock bag inside a jersey pocket along with my cell phone and other necessary items.

In the end, I guess all’s well that ends well, and we were very fortunate that there were the great volunteers like Susan staffing the ride, and the great EMTs who were on the scene so quickly, as they made all the difference in the world, so here’s to them, and also to the next ride going off accident free!

PEZ SEZ:
Sometimes bad things happen to good (and well-dressed) people. So in Parker’s time of need, we’re replacing that prized and beautiful garment with a brand new PEZ jersey. The new kit is on its way man!

Special thanks to Parker’s bud Barry J who alerted us to his friend’s plight.

And check out or review of Road ID – a good idea for any cyclist.

And finally – Get Your Own PEZCycling jersey online at
GloryCycles.com – for under $70!