PEZ Roadside: PEZman Ed Hood was in Belgium last weekend for the ‘6 Days’ of Gent, to see the farewell to ‘t Kuipke Keizer’ Iljo Keisse. When in Belgium in November you have to go to a cyclo-cross, and so Ed and his chums took in the Telenet Superprestige Merksplas. PEZ veld kant. 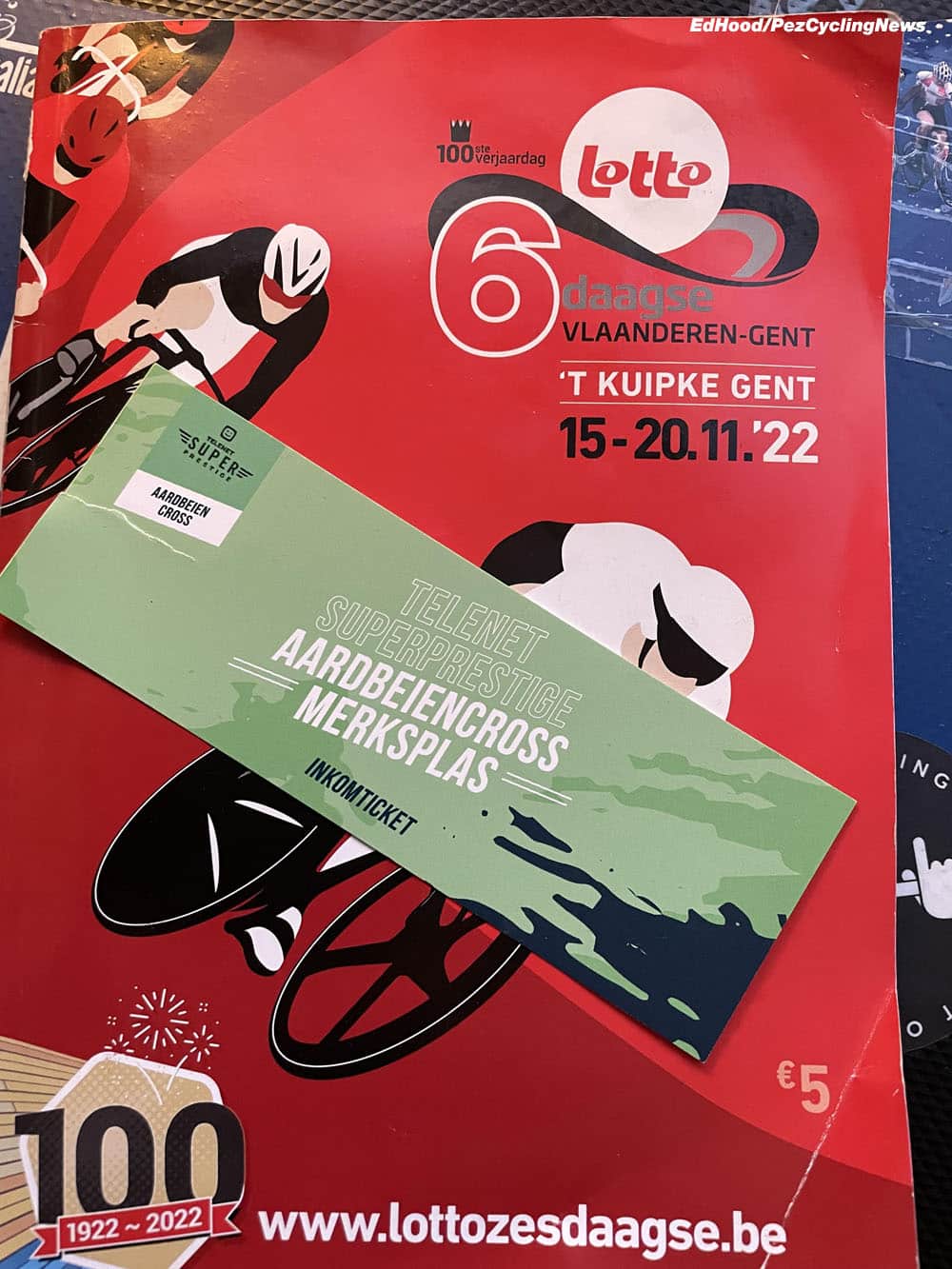 The ‘Telenet Superprestige Merksplas Cyclo-cross (C1)’ is a bit of a mouthful, so in these parts it’s best known as the, ‘Vlaamse Aardbeiencross’ – the ‘Flemish Strawberrycross,’ the area being famous for the cultivation of the sweet red beauties. 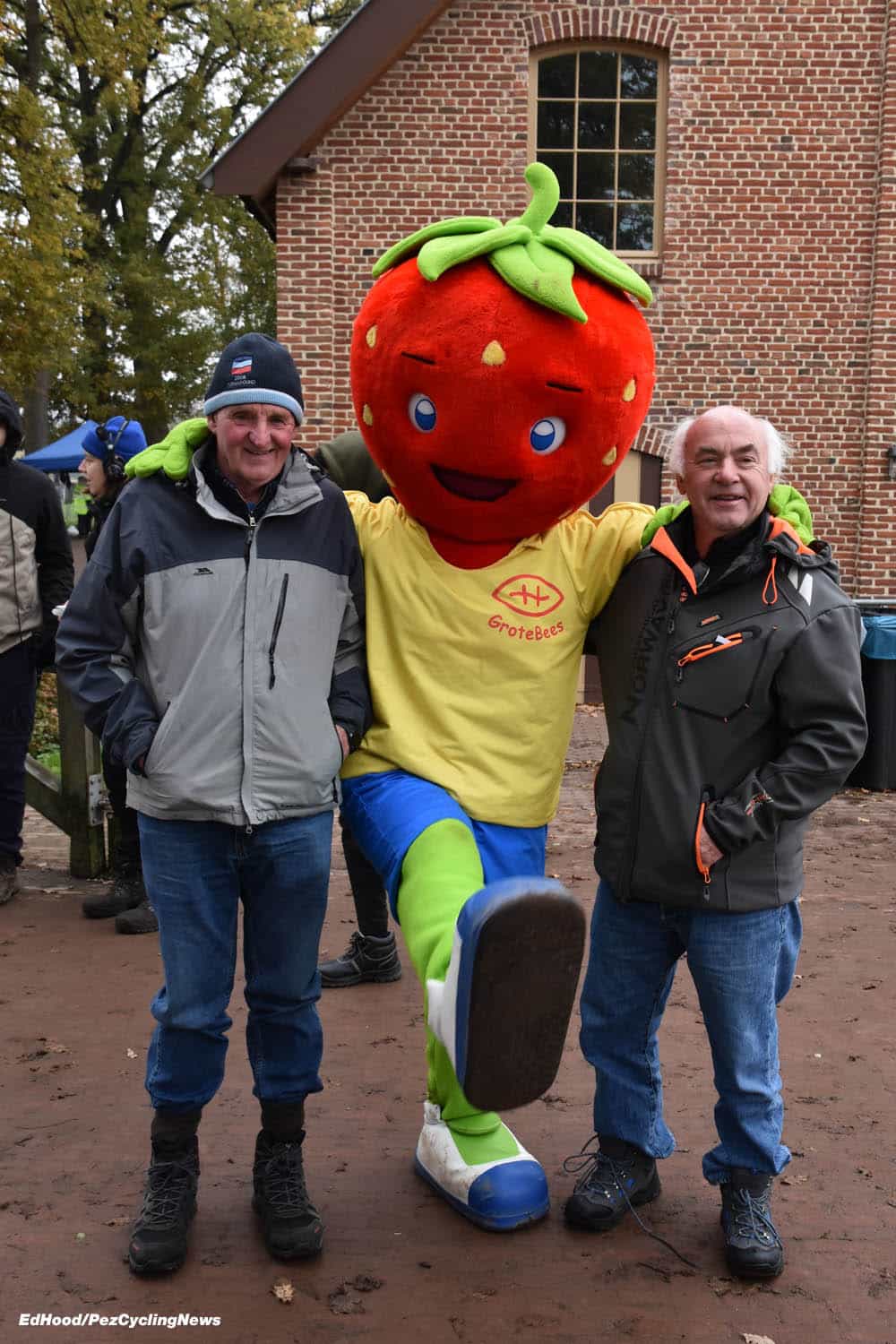 And there to greet us was Flanders’ biggest strawberry, that boy is going to need a few gallons of cream to go with him. It’s not a proper weekend in Belgium if you don’t take in a ‘cross; we used to go to the Koksijde ‘Duinencross’ in the sand dunes beside the North Sea but that was moved to another date, then it was the Hasselt ‘cross where we saw the great Svn Nys win – but this year we headed north to Antwerp and beyond to get our fix of mud and sand. 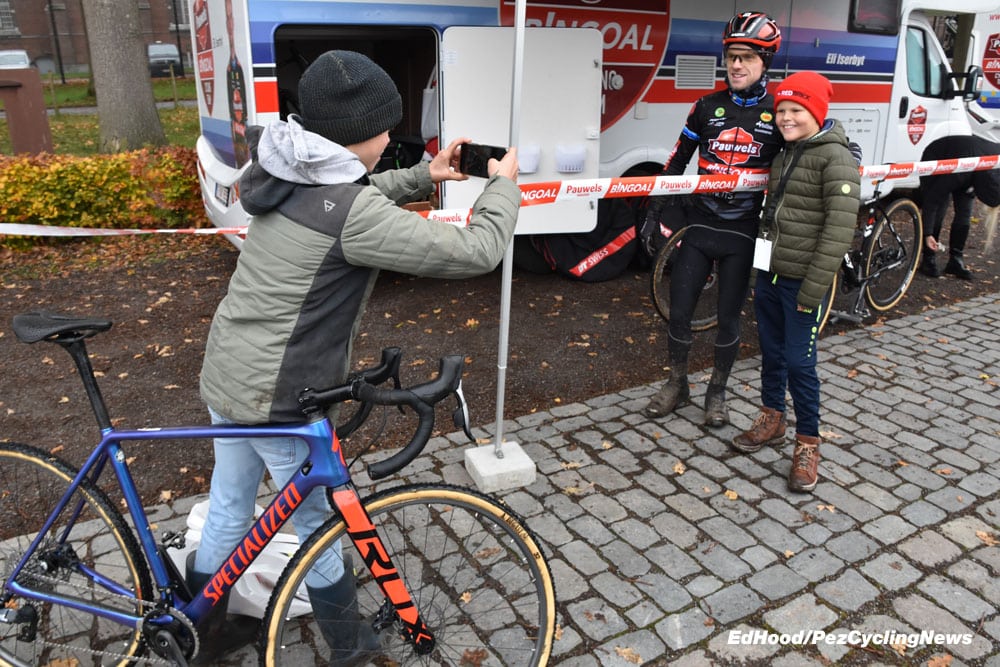 The good thing about crosses is that you’re free to wander among the camper vans, mechanics and bikes – heaven for equipment geeks. The first man we came across was Eli Iserbyt, ‘doing the pro thing’ and getting his picture taken with a delighted young fan. 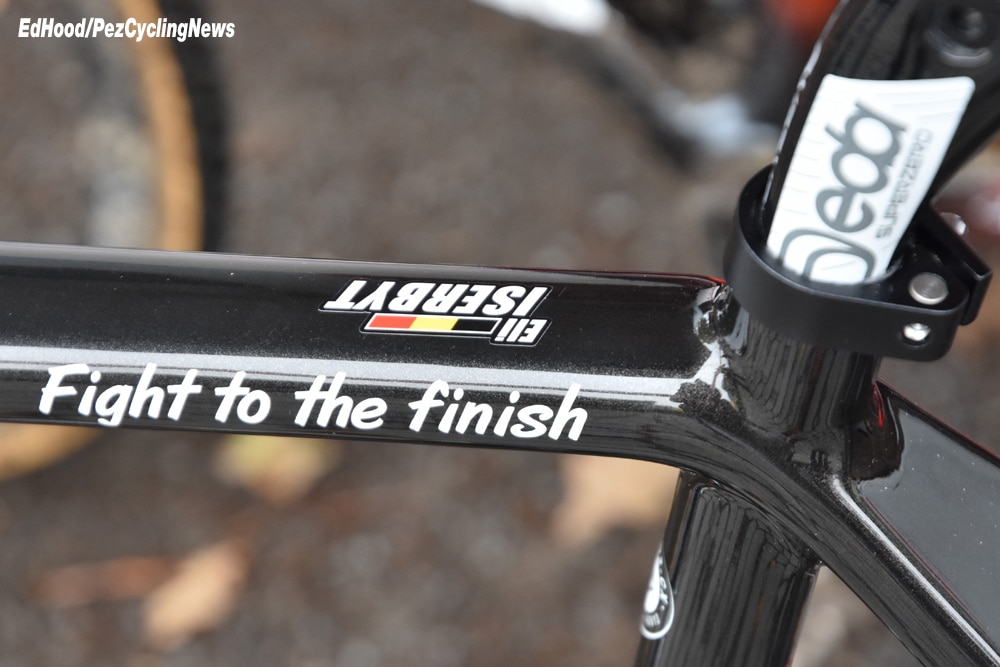 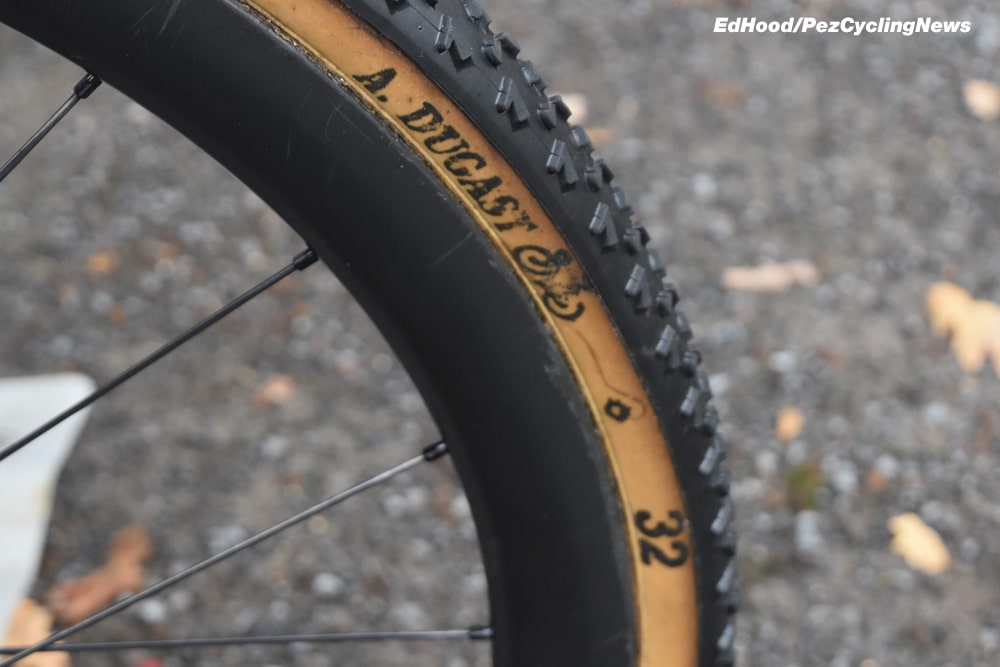 And whilst on the road and even the boards the talk is all of ‘tubeless,’ just about everyone in the ‘cross world still run those beautiful Dugast tubulars. In 2002 Richard Nieuwhuis took over the A. Dugast brand from the French founder and all the tyres are now hand made in The Netherlands. At the other end of the scale they also do very light, super-fast, gorgeous pink coloured track tubulars. 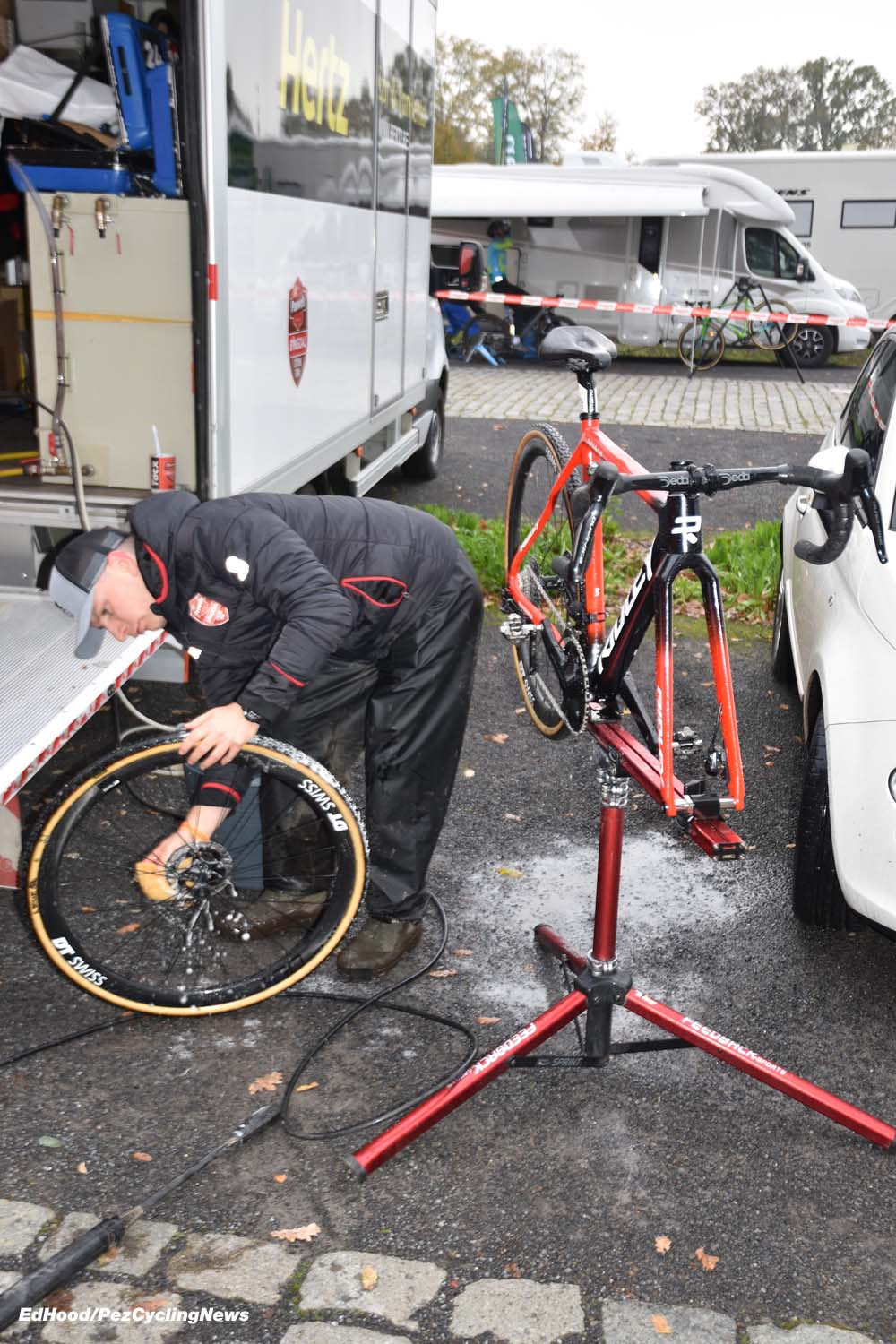 A ‘cross mechanic’s lot is not an easy one, they have to clean the bikes twice, once after the warm up and then again after the finish. On a course like this, with clinging mud it’s no fun. 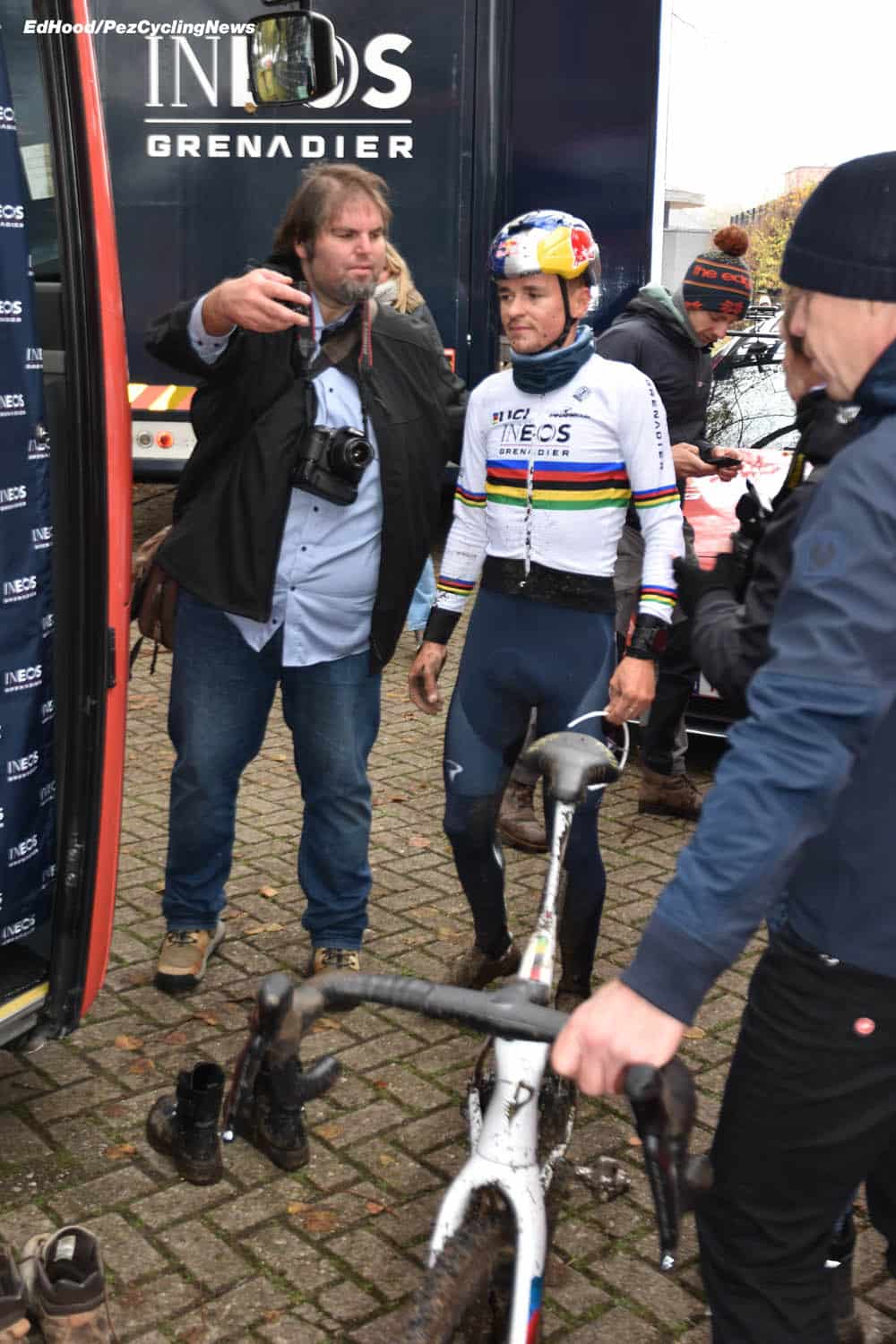 One of the major attractions at Merksplas was the appearance of rainbow jersey, Tom Pidcock – seen here collared for the inevitable ‘selfie.’ 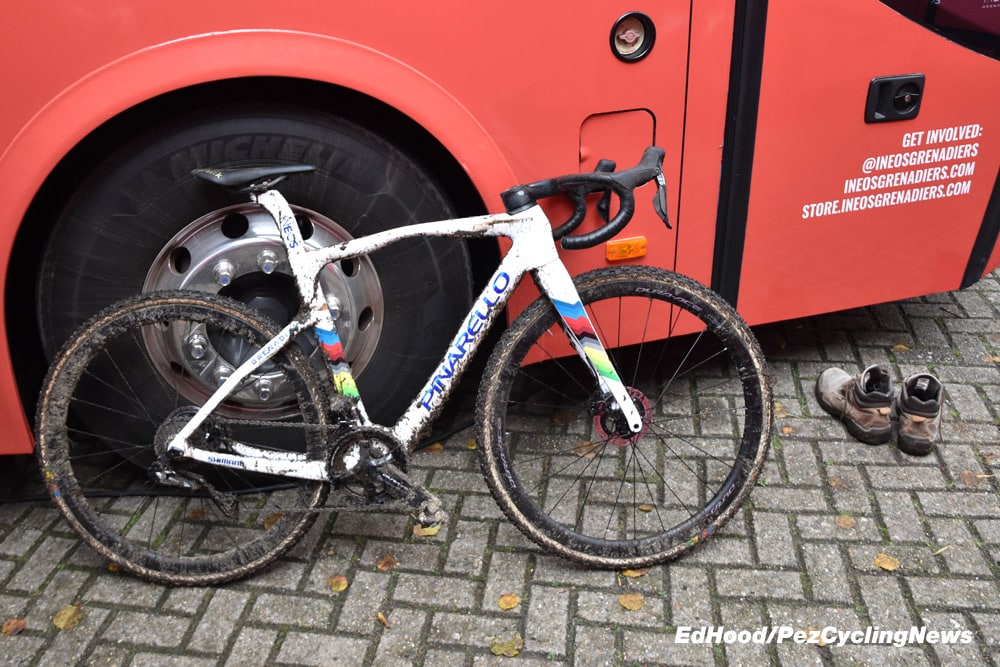 His Pinarello was looking a tad dishevelled after the warm up but the mechanics would soon sort that – note the curved ‘carrying’ indentation in the top tube, a feature Pidcock himself requested from Pinarello. 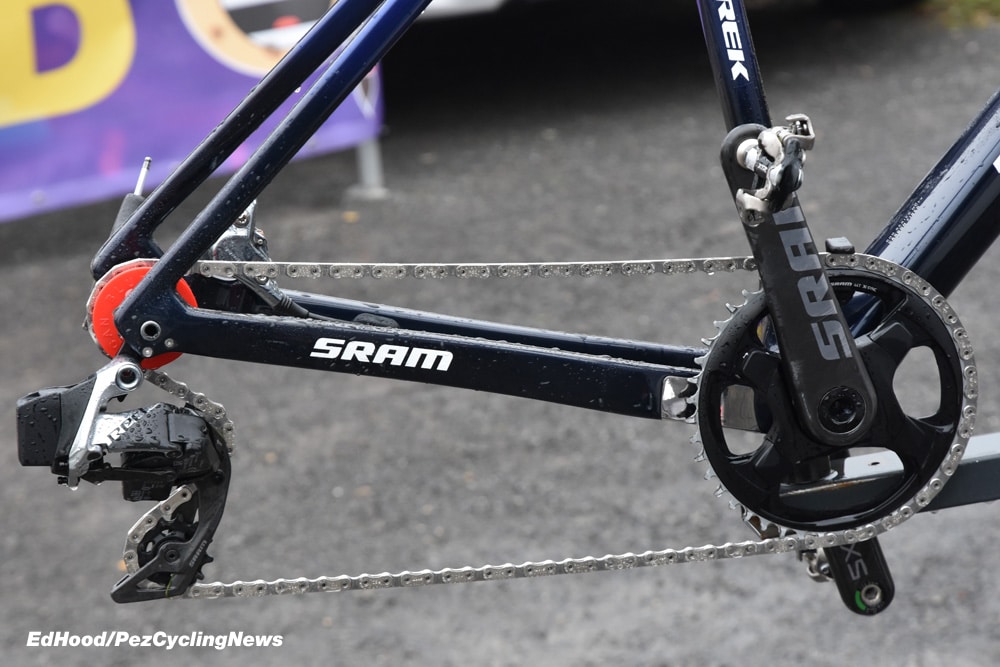 1 x transmission is gaining ground in the ‘cross world, especially on a fast parcours such as this – it also attracts much less mud, front changers really gather the muck. Note the neat chain guide to prevent the chain bouncing off the chainring on rough surfaces. 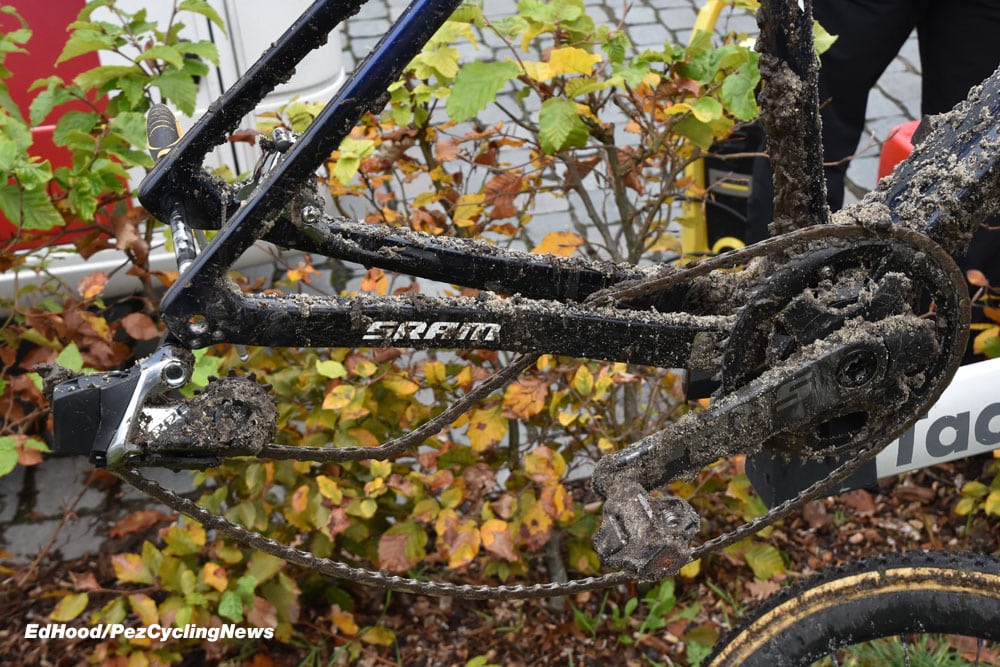 That said, this was one mucky course so bike changes every lap were a ‘must.’ 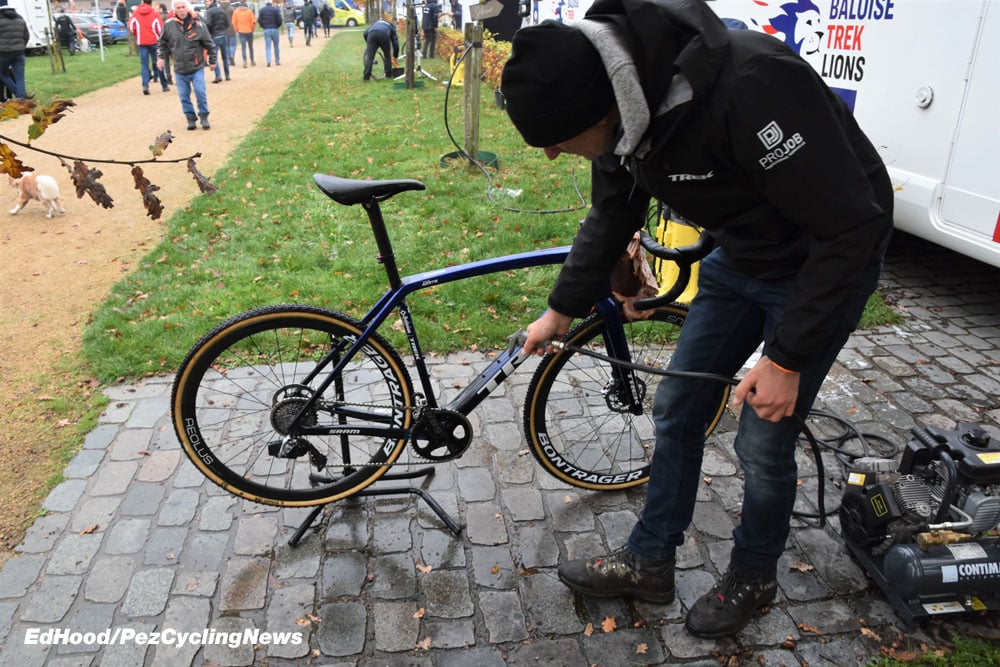 One piece of trickery I’ve never witnessed before was the mechanics meticulously drying every inch of the bikes – including the chain – with compressed air after cleaning them. 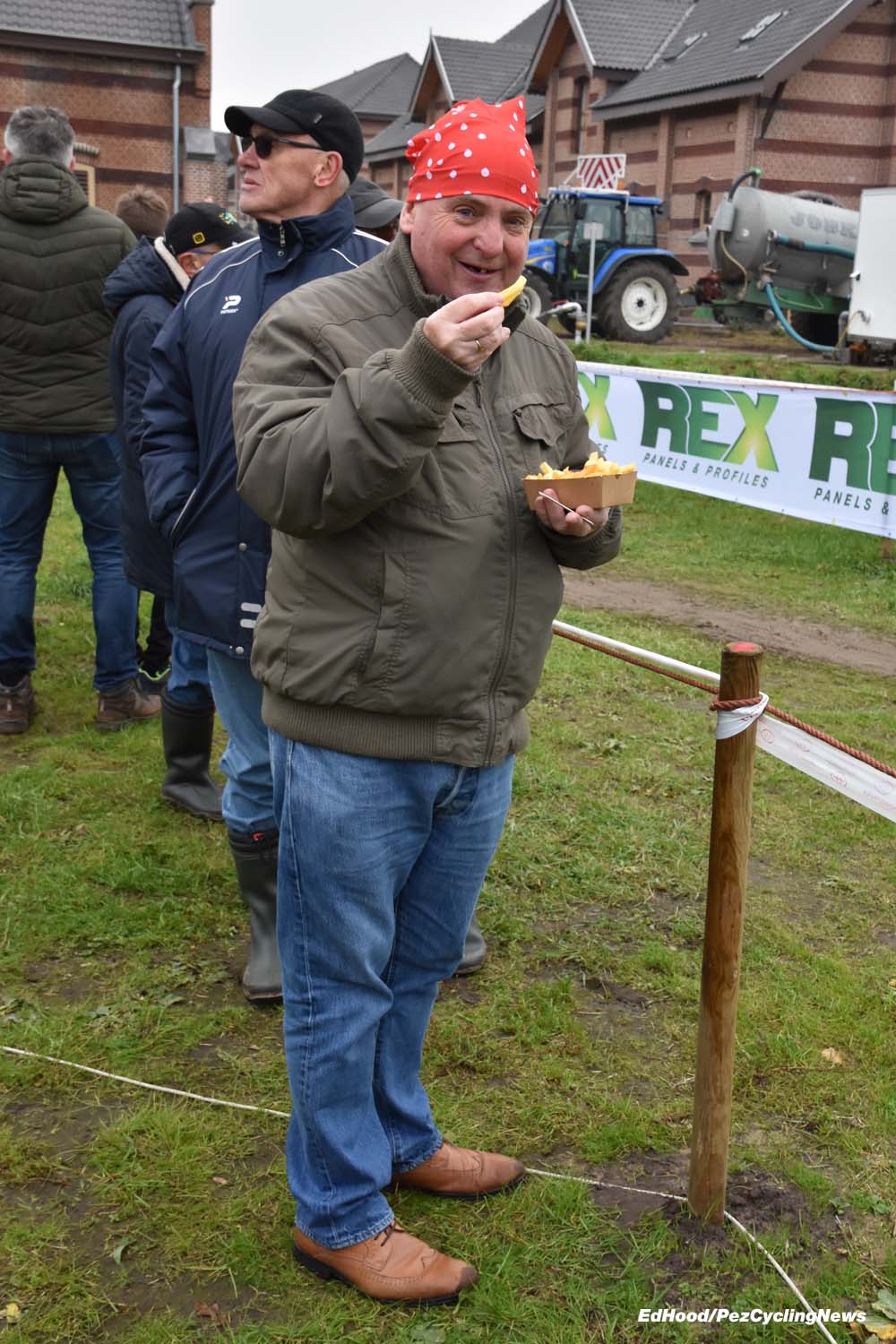 And no ‘cross is complete without a trip to the frites caravan; Dave’s brother Hugh also models the strawberry snoods freely distributed around the parcours. 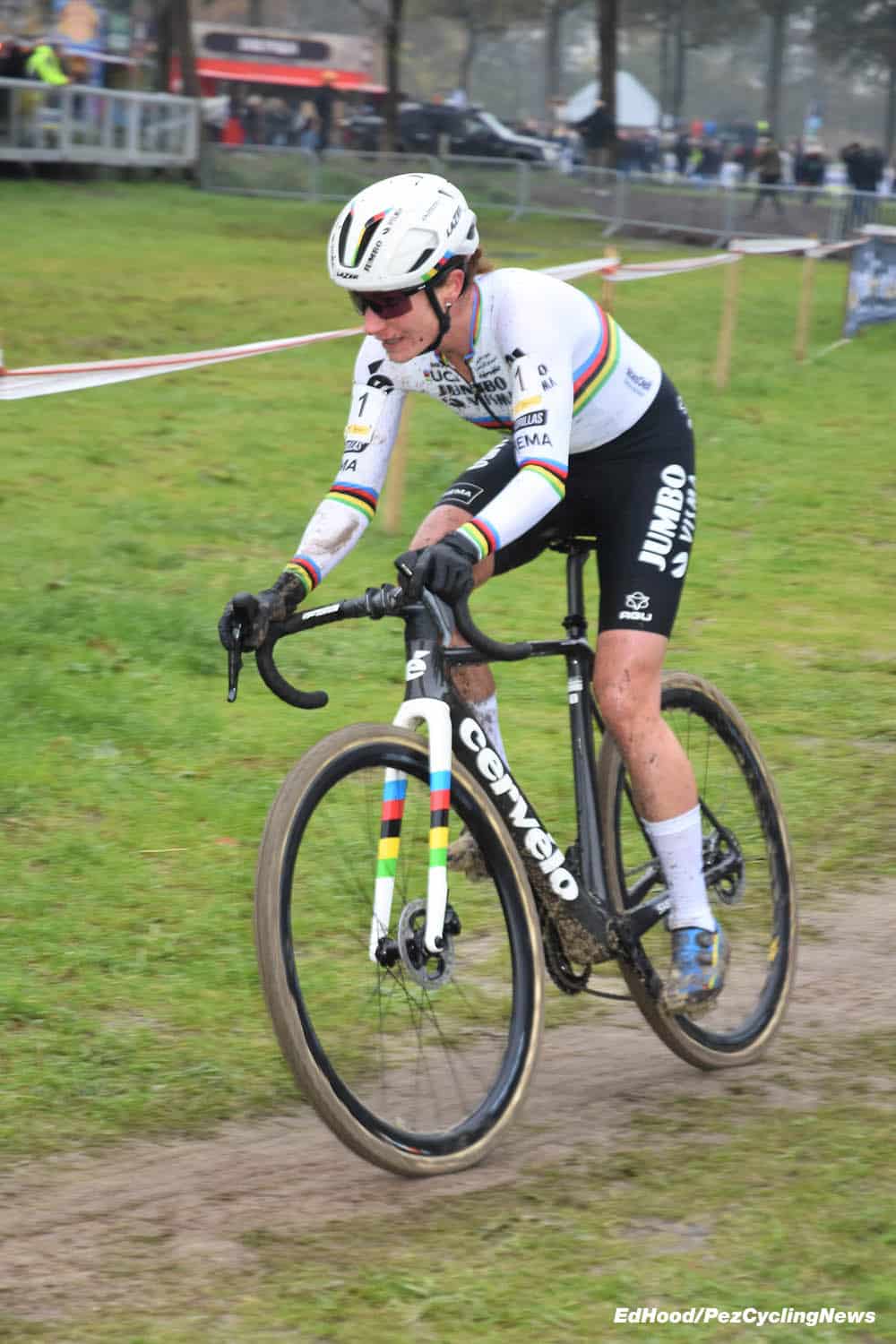 In the ladies’ race Dutch World Champion, Marianne Vos looked the part but it definitely wasn’t her day, finishing in an uncharacteristically lowly 10th position. 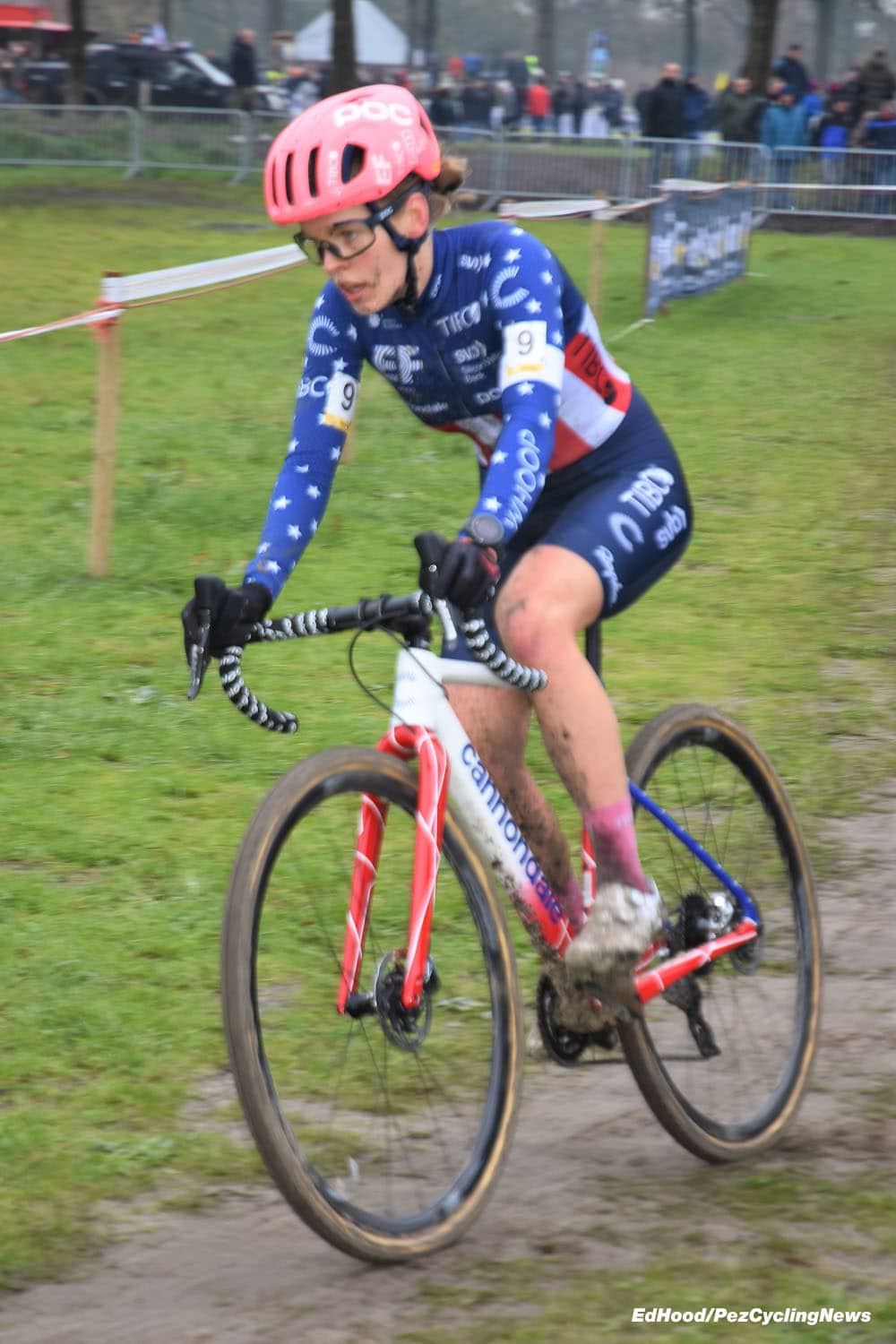 US Champion, Clara Honsinger finished one place ahead of the World Champion. 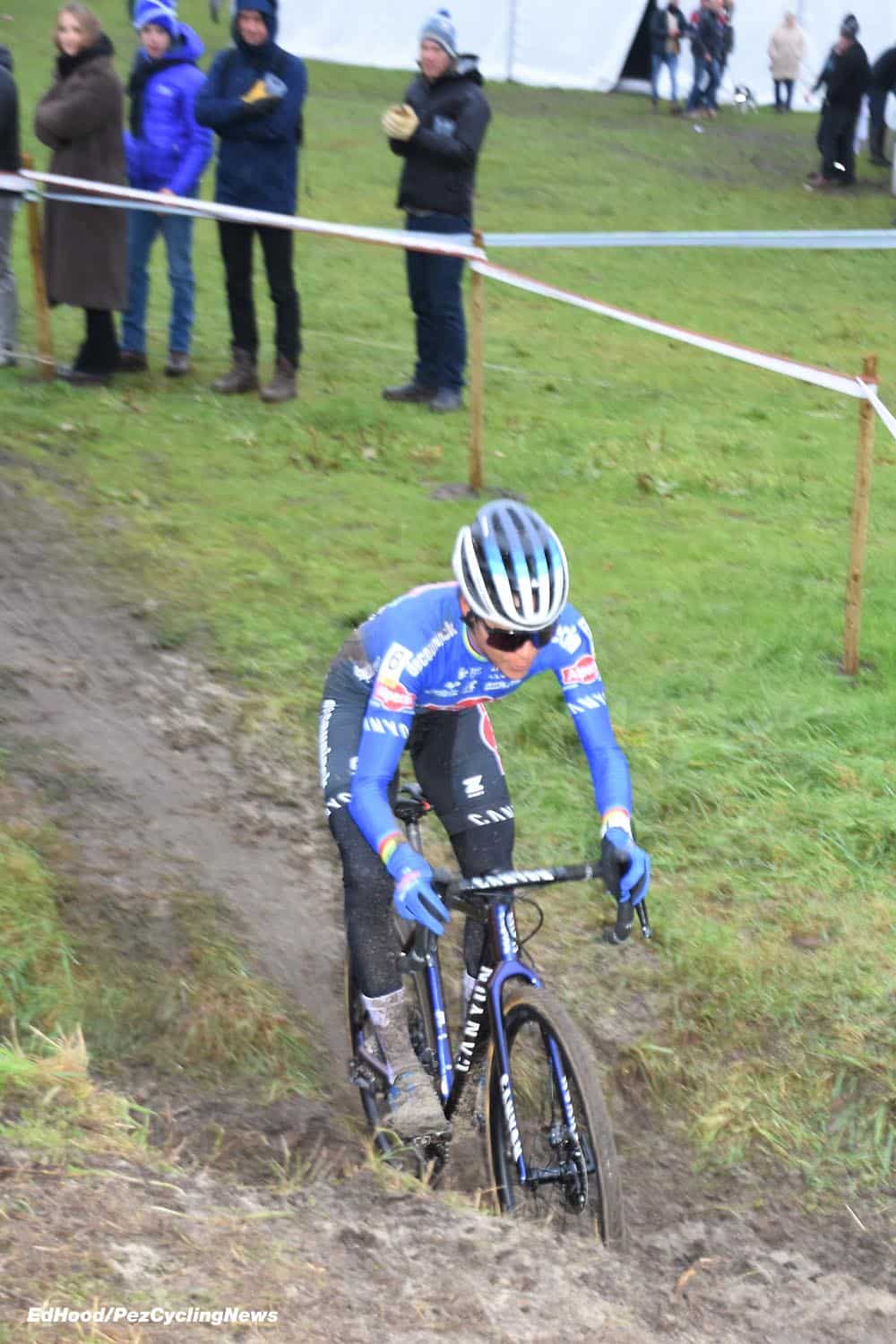 Winner, Ceylin Alvarado was in a class of her own, the 24 years-old former World Champion started like a rocket and was never to be seen again – she was moving visibly faster through the technical sectors than any other rider 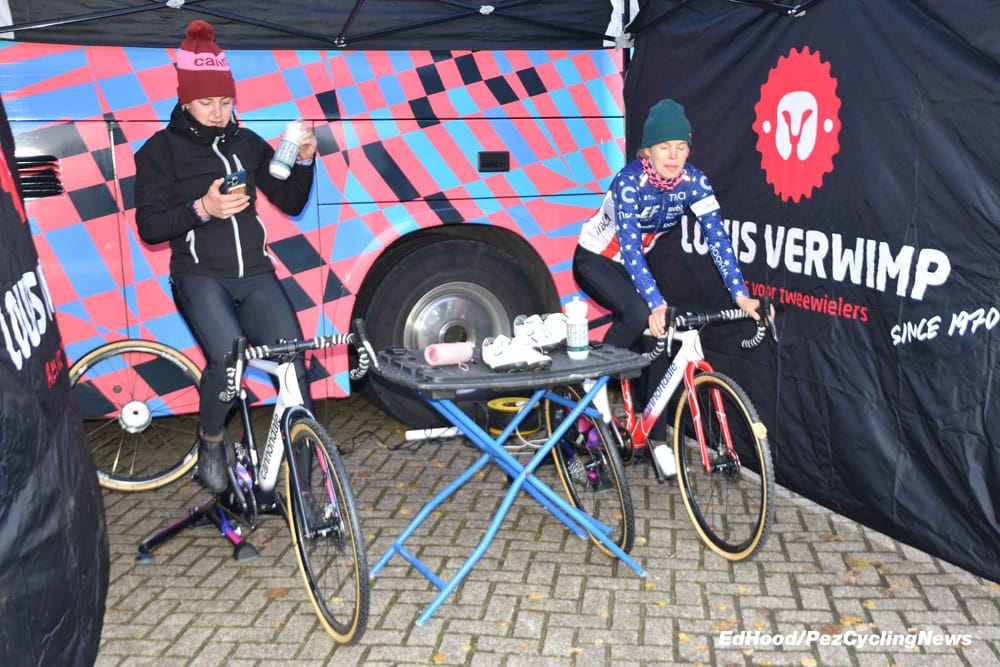 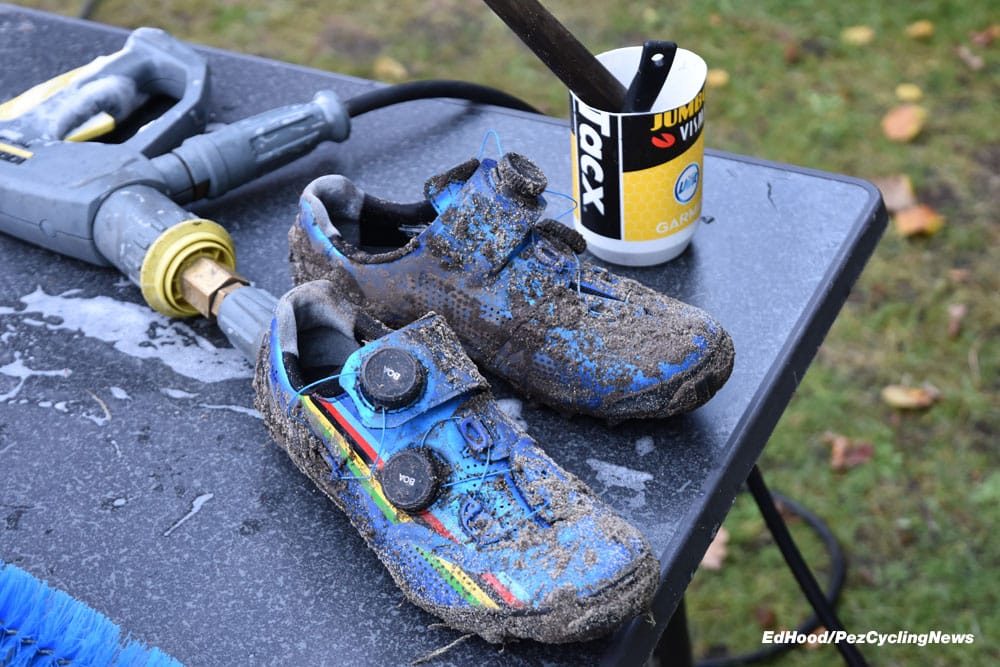 Whilst even Marianne’s shoes looked depressed. 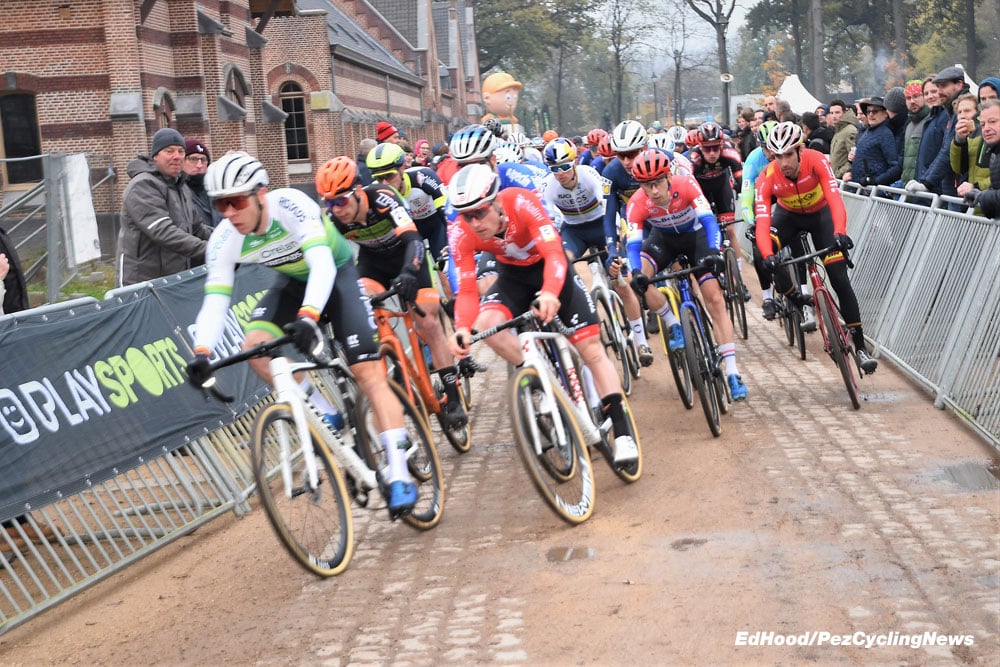 There was the usual ‘team sprint first man speed’ charge for the first corner with the auto focus on my camera latching on to Tom Pidcock and not so keen on Belgium’s Laurens Sweeck who was already at the head of affairs. 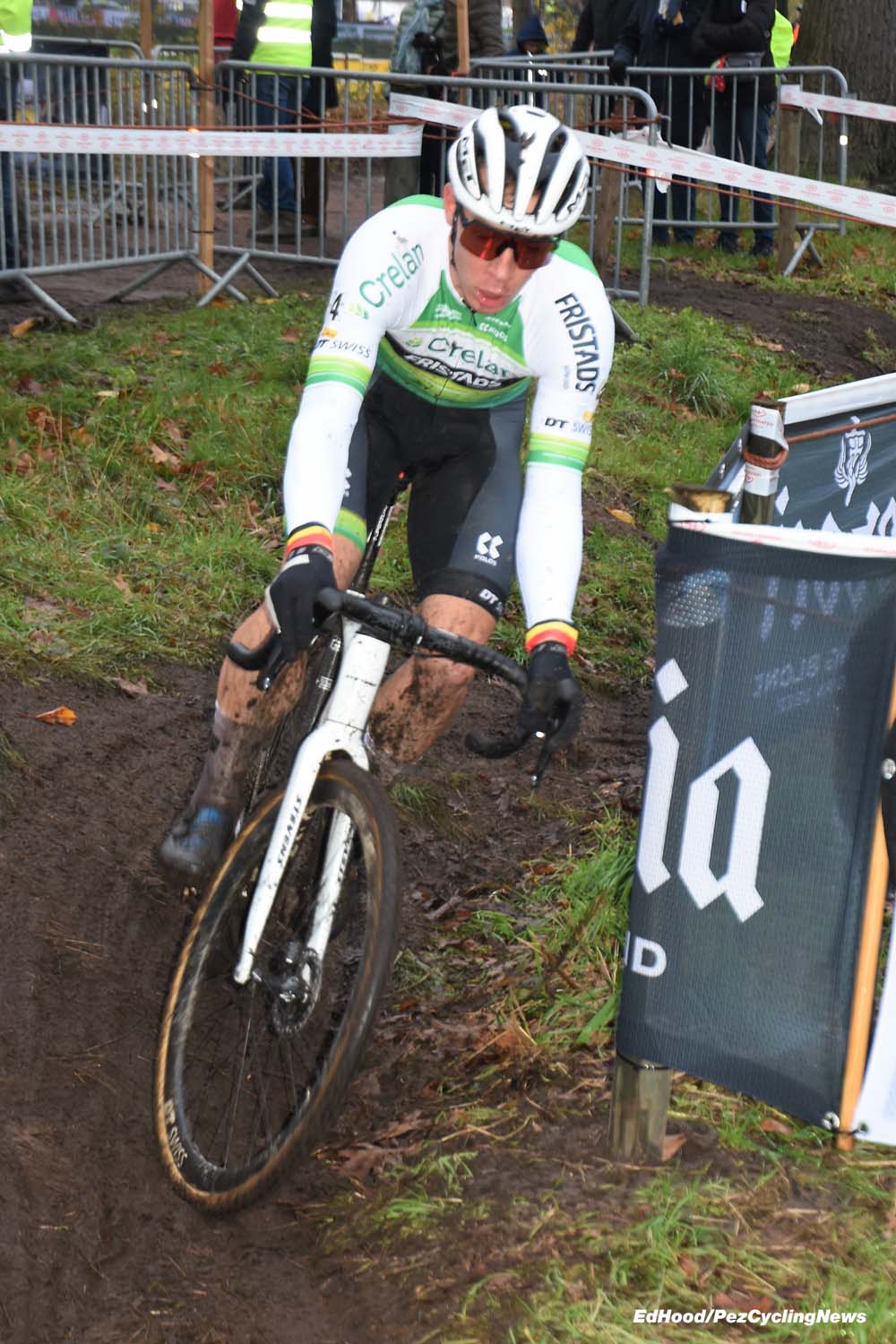 Sweeck is ‘man of the moment’ with this his fourth win of the season – and in 13 starts in UCi ‘crosses his lowest finish is fourth. 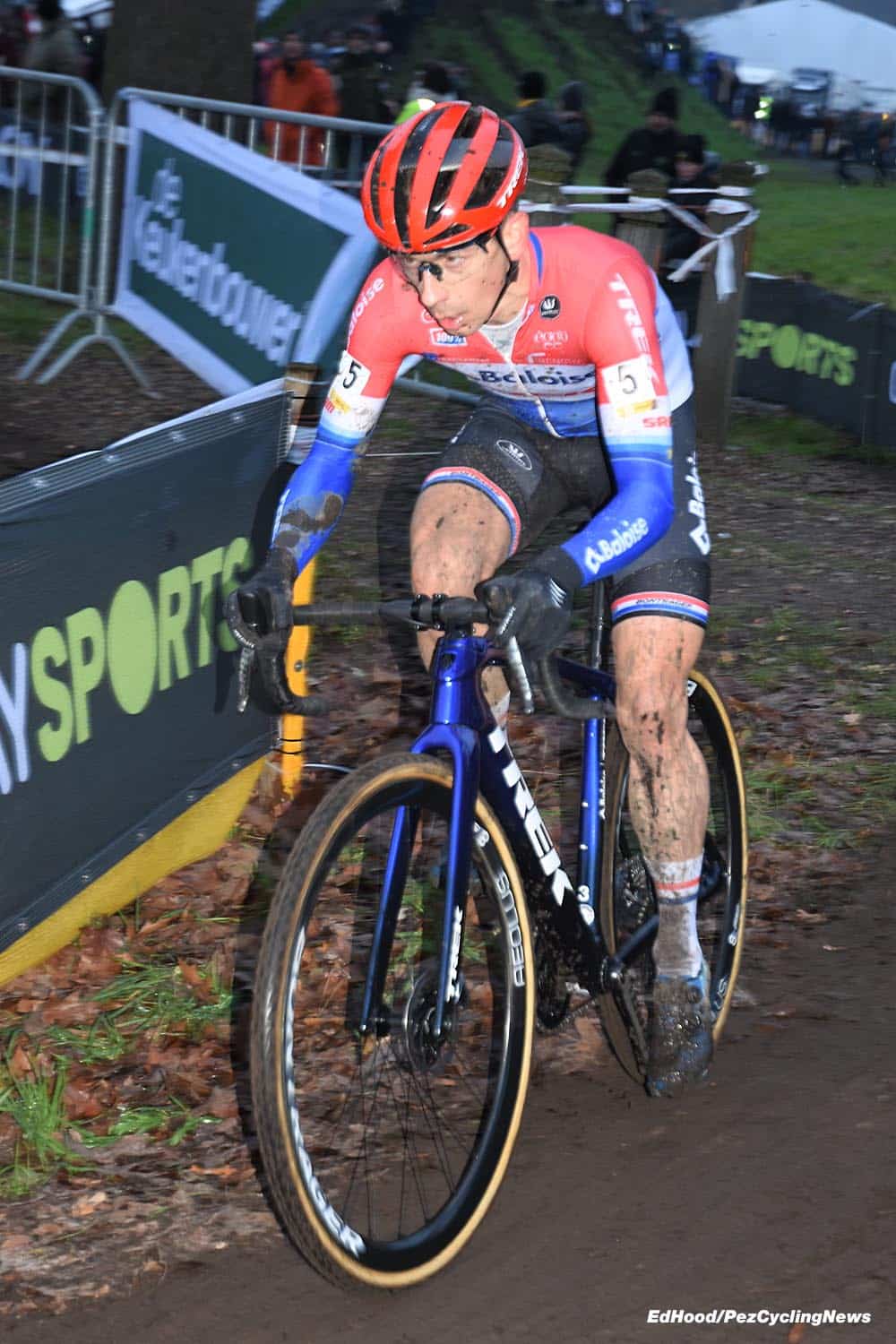 Never out of the top placings, and an eventual second to Sweeck was Dutch Champion, Lars Van Der Haar, his 1 x transmission proving no handicap. 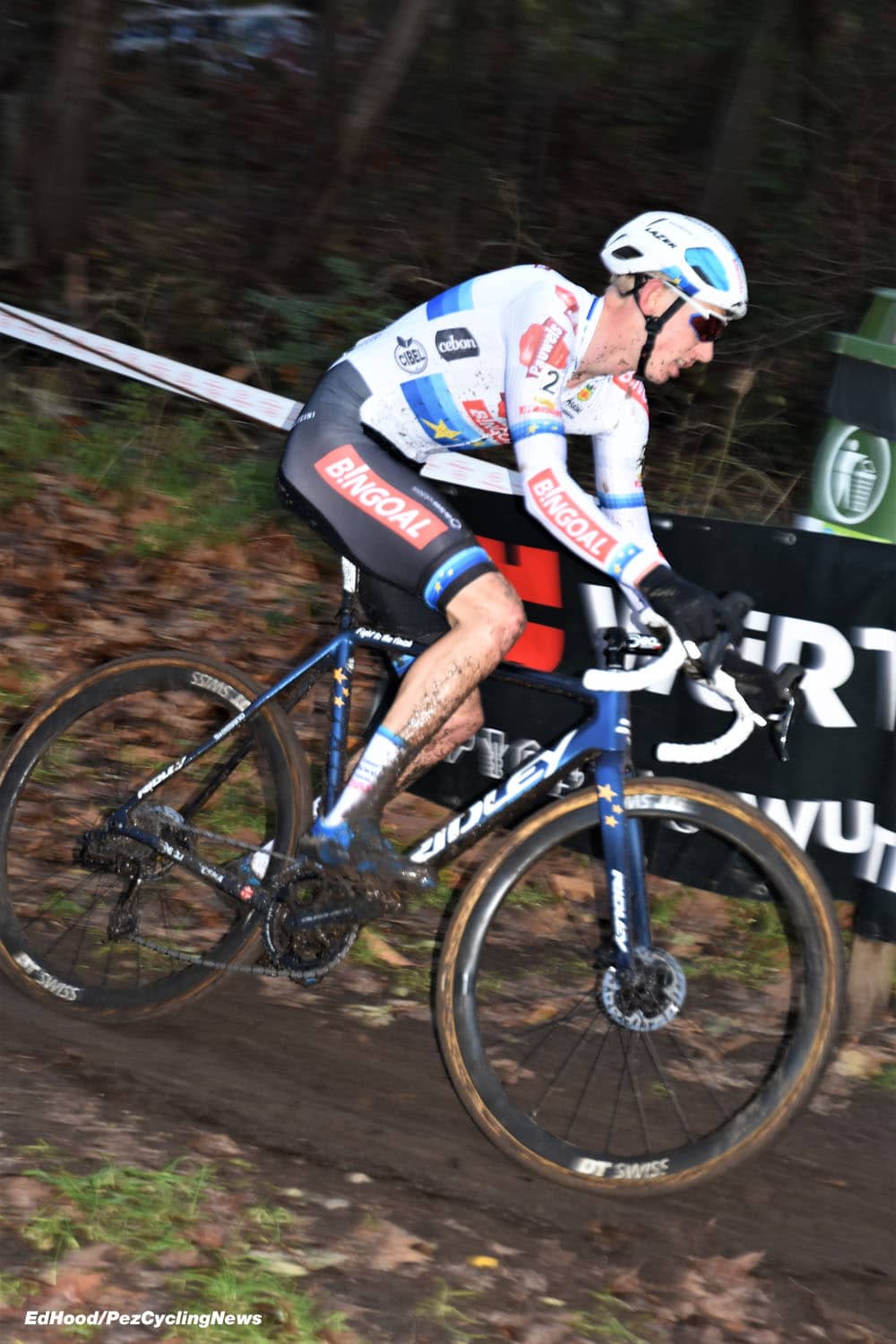 After a slow start, Belgian European Champion, Michael Vanthourenhout took an eventual third place. The next day in the Overijse, the tall man from Bruges would top the podium. 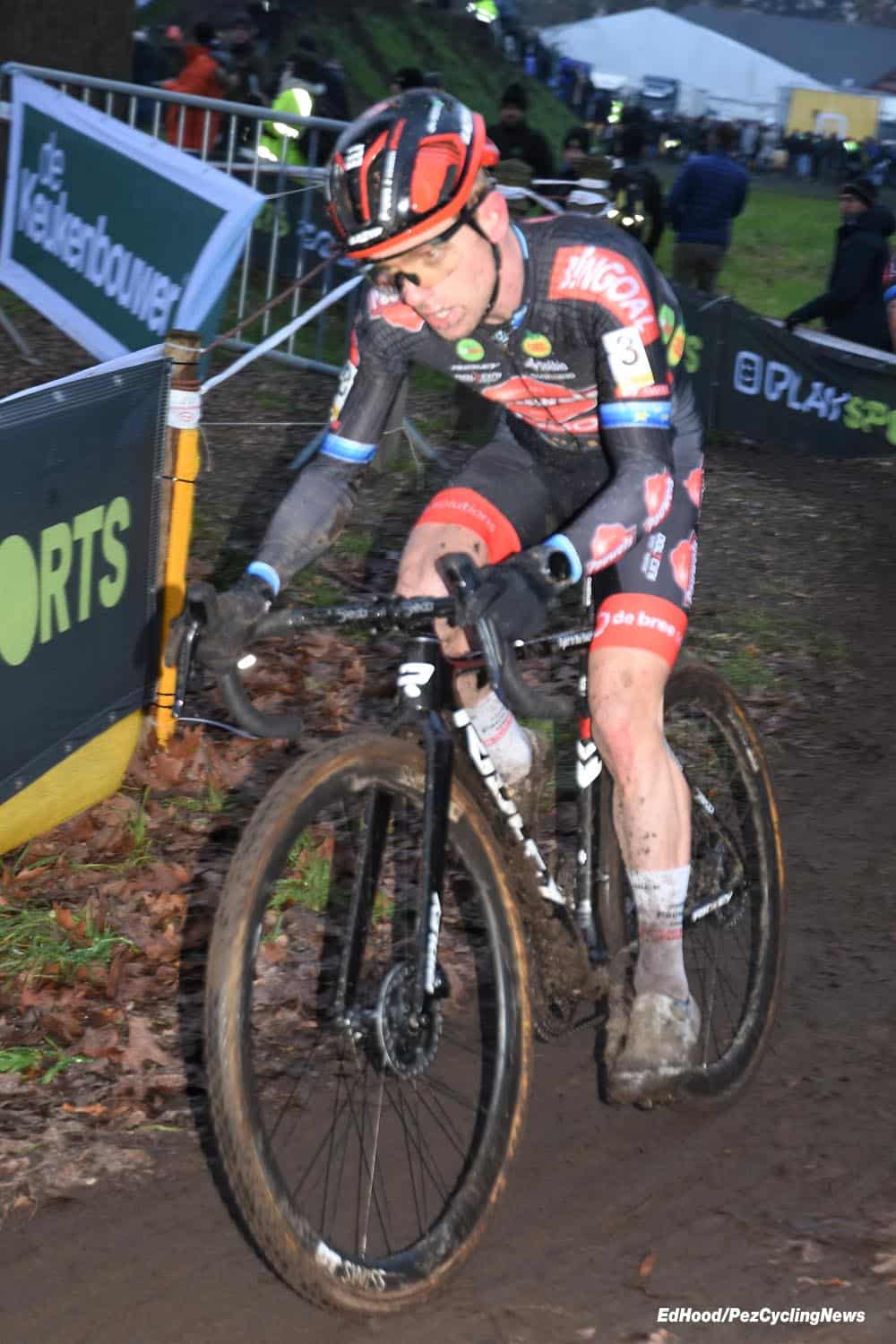 ‘Man of the season’s start,’ Belgium’s Eli Iserbyt finished fourth, he’s been struggling recently with back pain and an MRI scan confirmed he is suffering with sciatica. 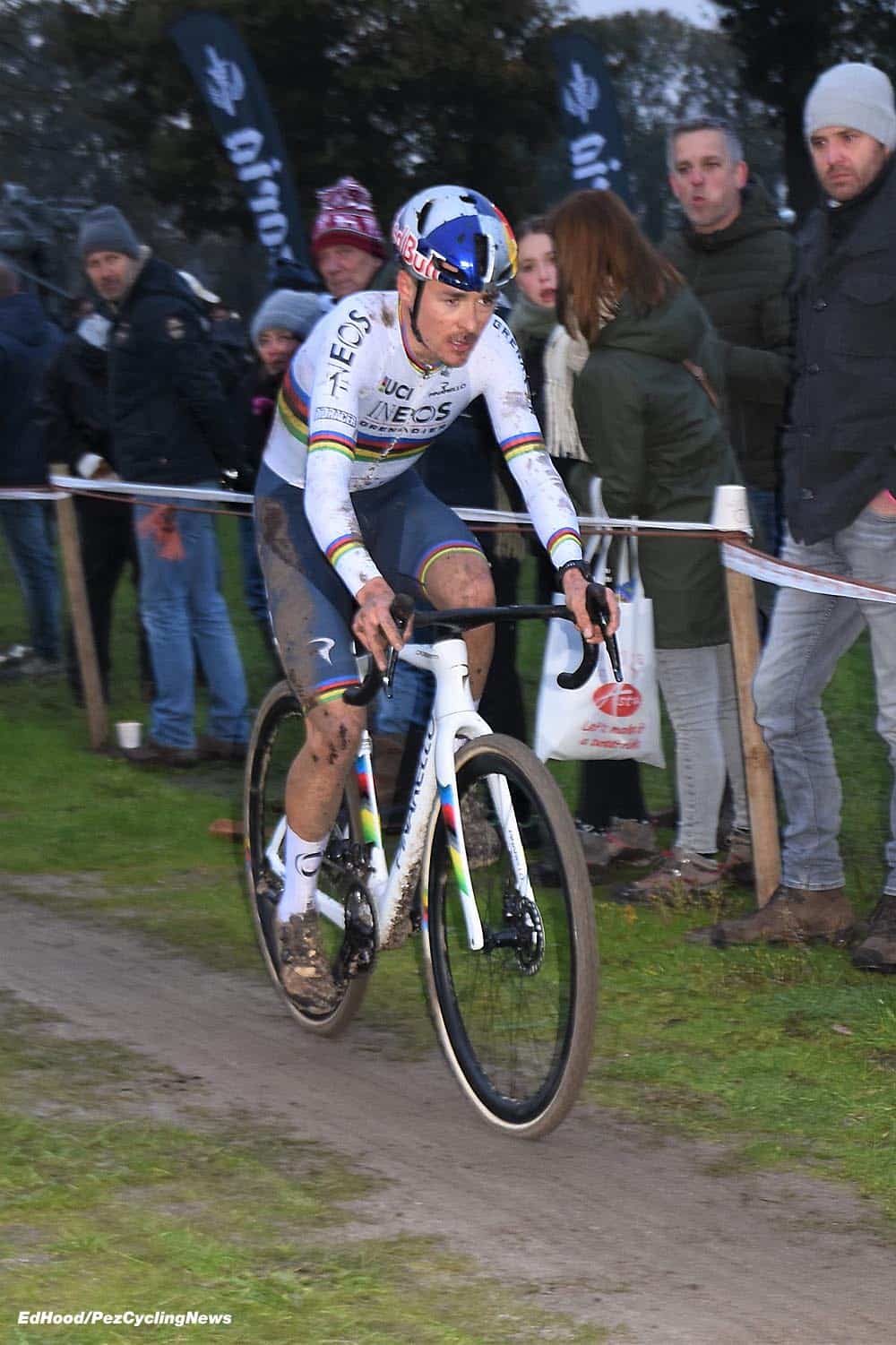 World Champion, Pidcock was in his first ‘cross of the year and finding his feet, a seventh place finish isn’t what he’s accustomed to – but he’d finish second to Vanthourenhout next day in Overijse. 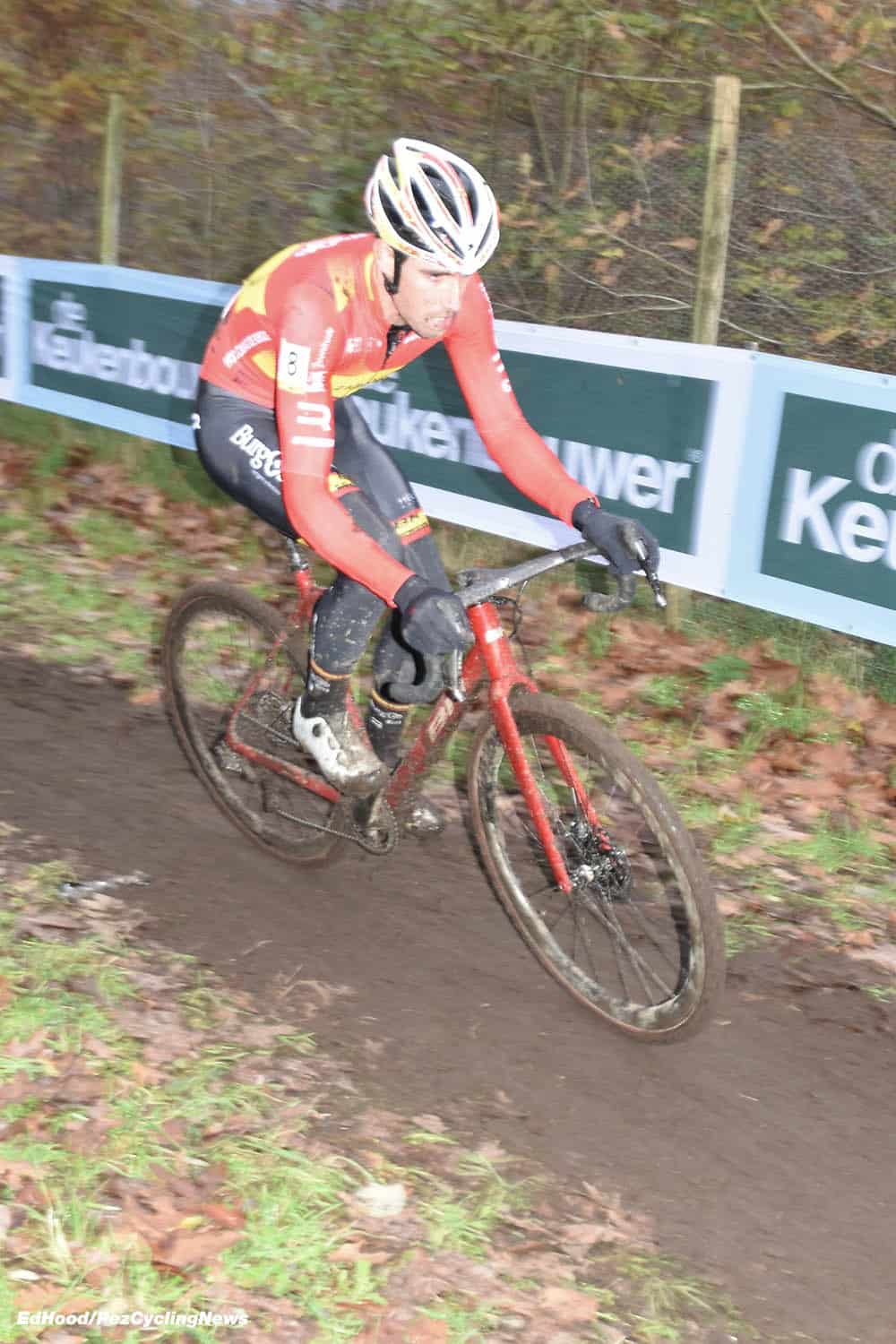 One place behind the World Champion was a rare bird, a Spanish “top ‘cross man,” – four times National Champion, Felipe Orts who has dominated the sport at home in recent times. And whilst Spain isn’t a major ‘cross nation, his National Champion’s jersey means he’ll be on decent start money. 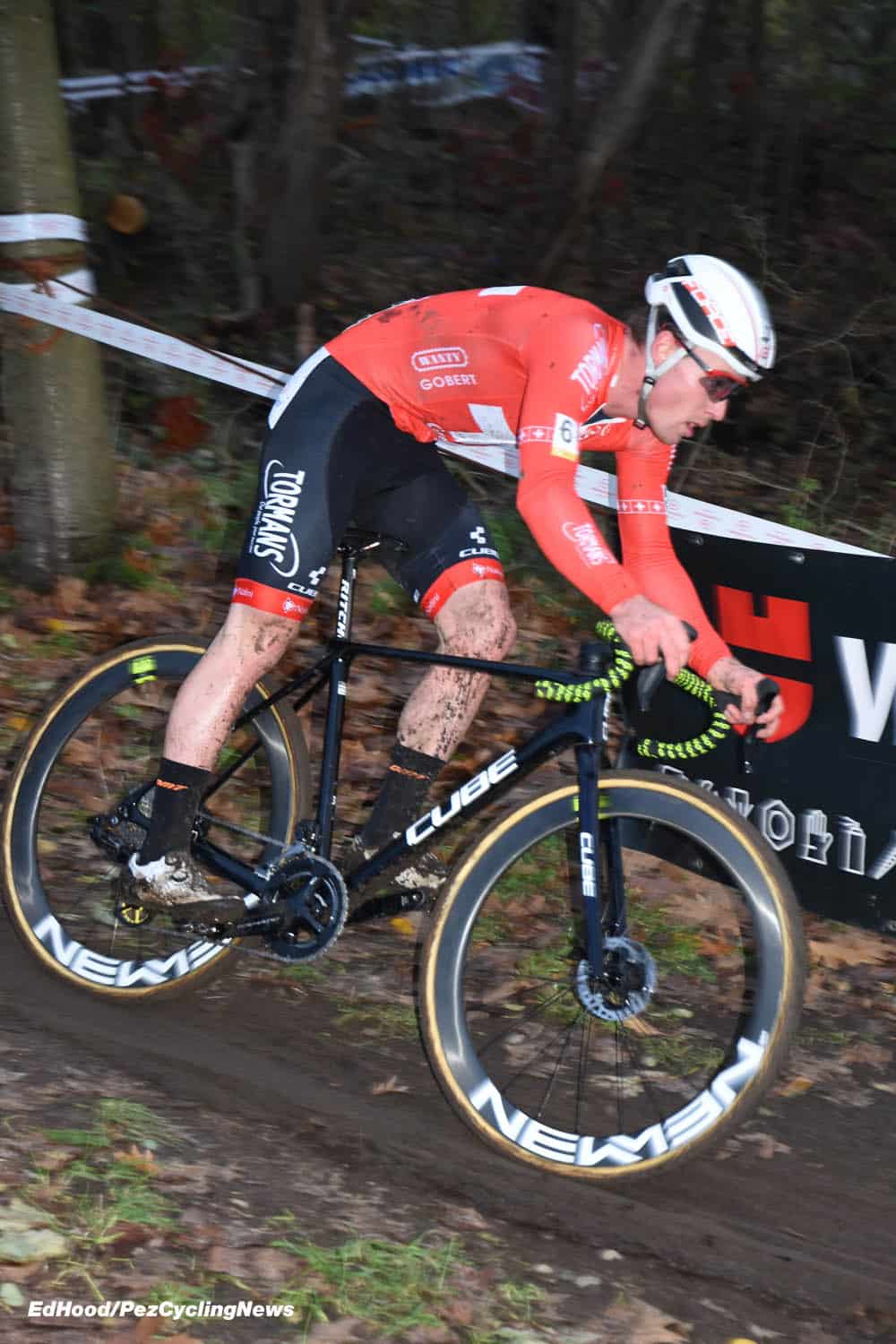 Reminding us of the glory days of Swiss ‘cross when names like Albert Zweifel and Peter Frisnecht dominated the sport was stylish Swiss Champion, Kevin Kuhn in ninth place. 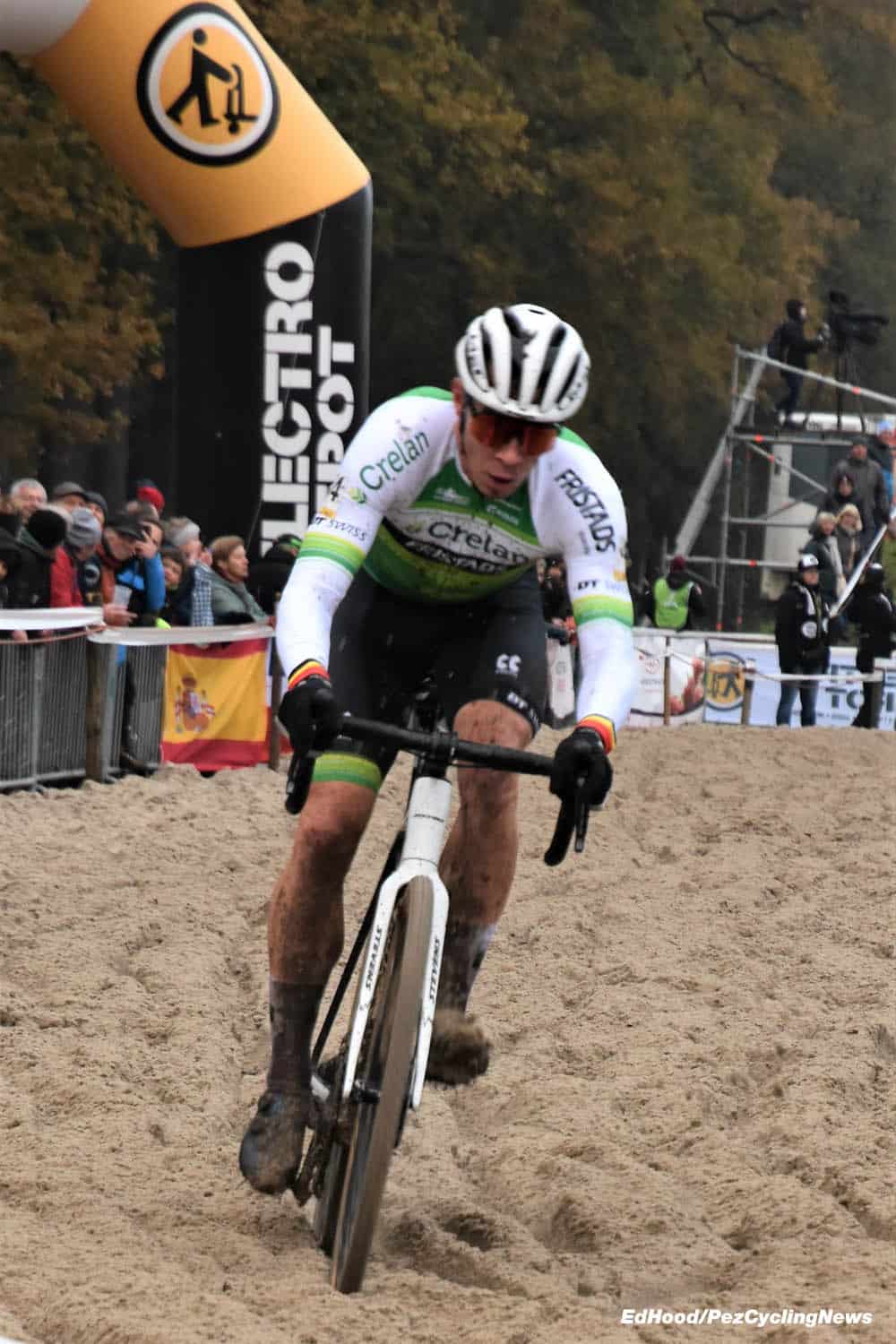 Sand on the bikes had alerted us that there must be a sand section, we arrived at the ‘man made’ sand sector, which was in the middle of a field in time to see Sweeck blast through, no dismount, just pure power. 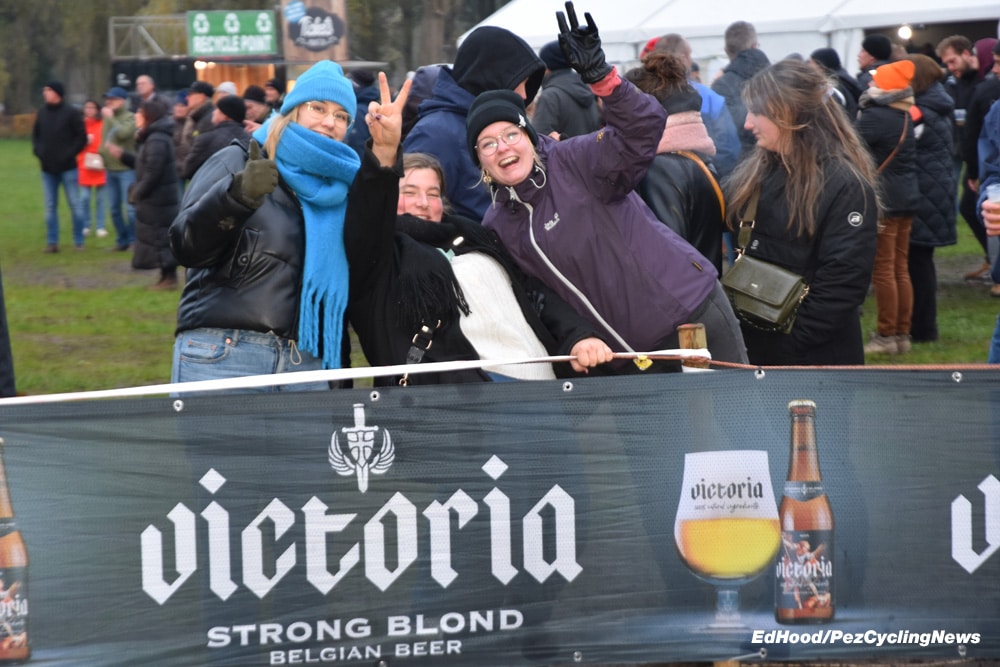 At this point some young ladies who had been enjoying one of the sponsoring companies products insisted we take their picture – glad to be of service, girls. 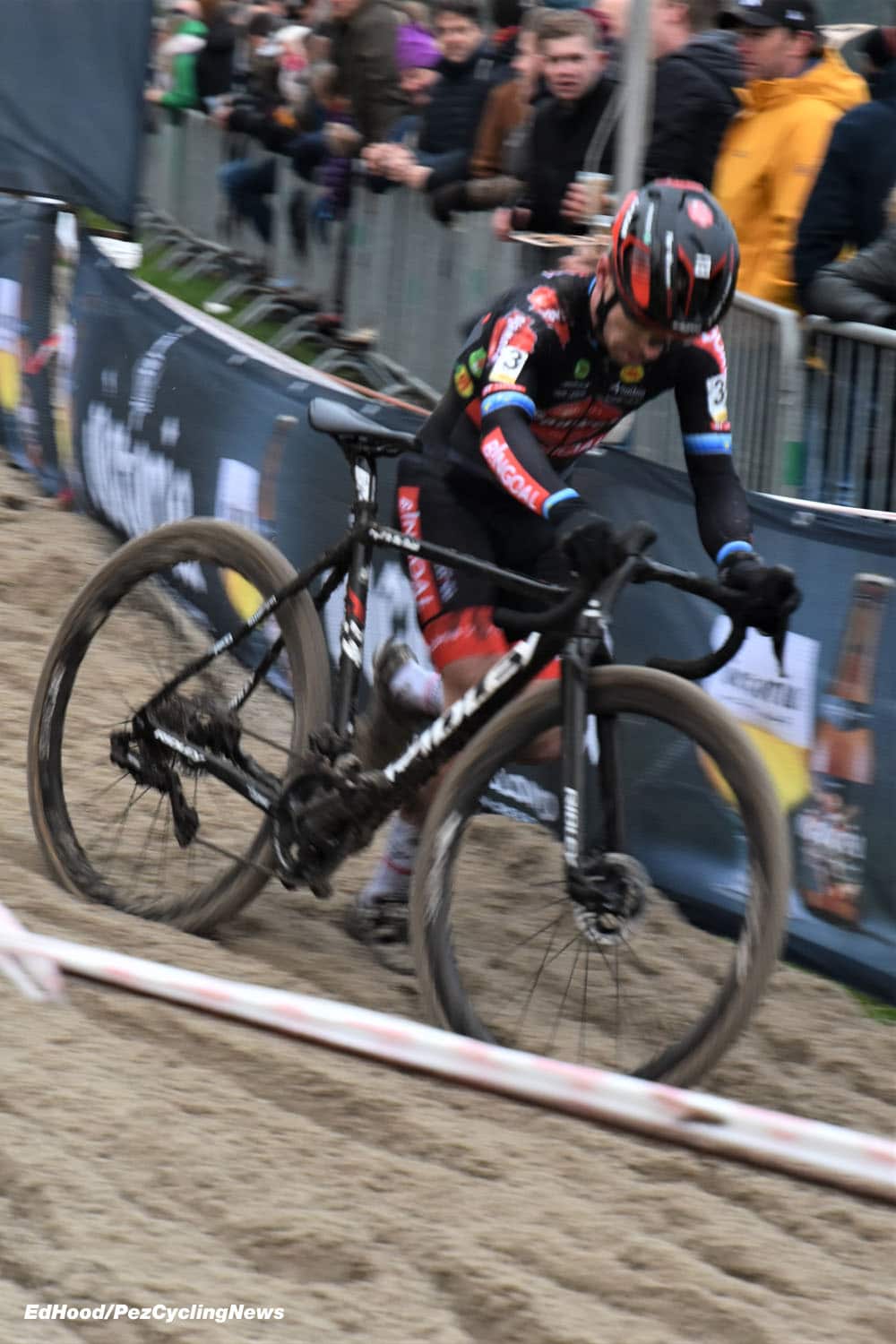 Iserbyt wasn’t as strong as Sweeck through the sand though and had to dismount. 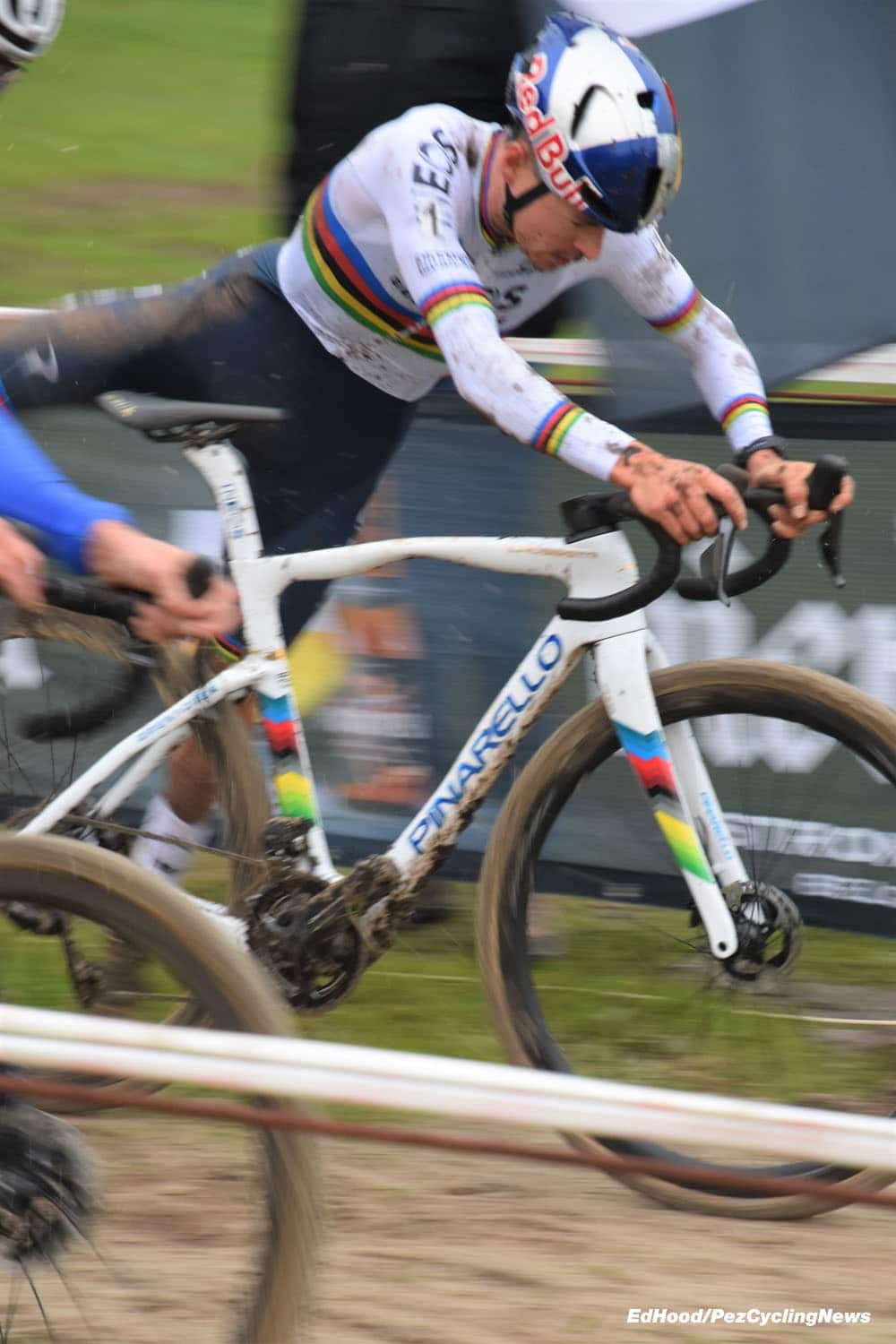 As did Pidcock – but he was niftily back in the saddle. 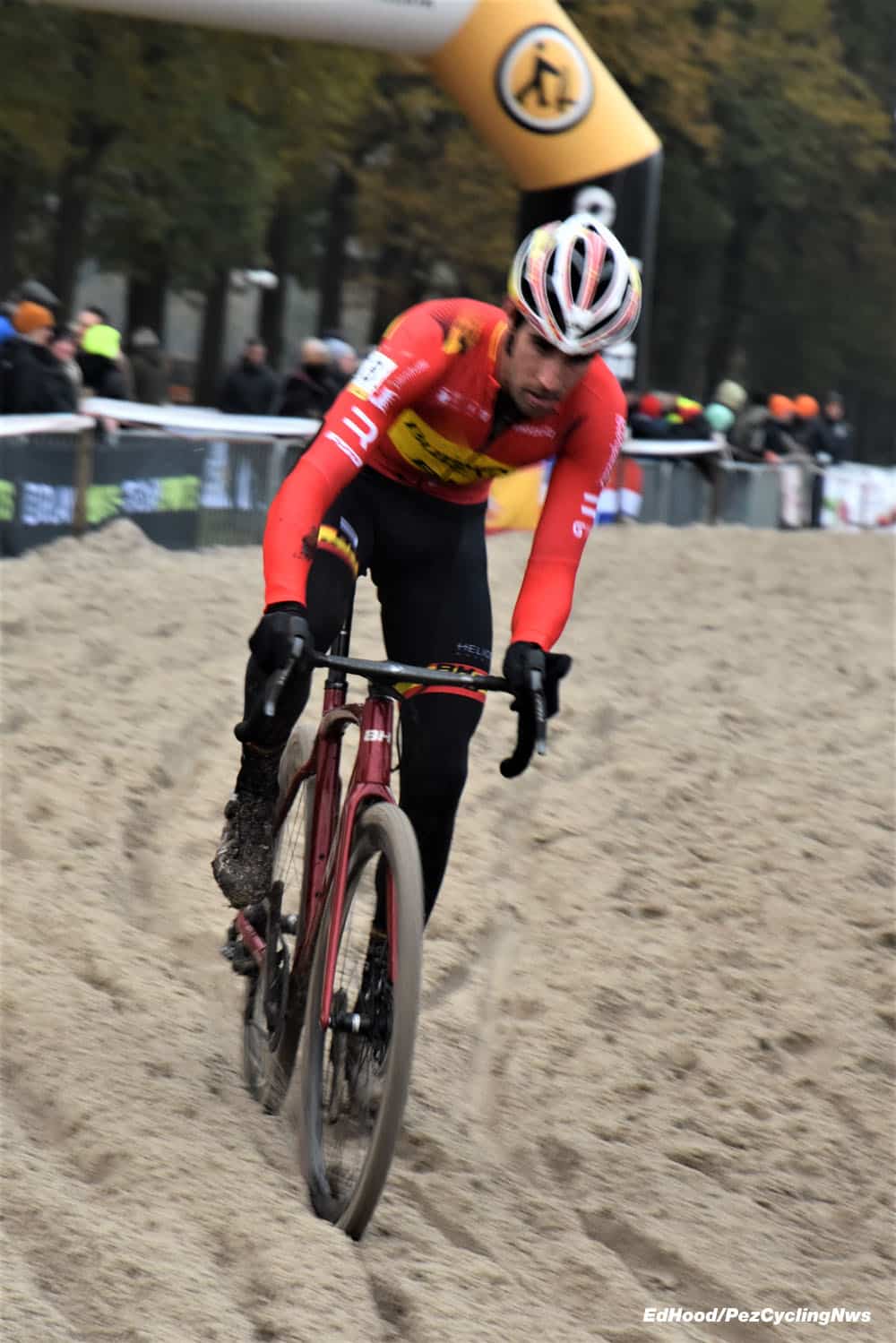 Orts however handled the sand well.

And that was that, time to tune to Radio Nostalgie Belgique and head south through the Kennedy Tunnel under the Scheldt at Antwerp to Gent and the Kuipke. . .