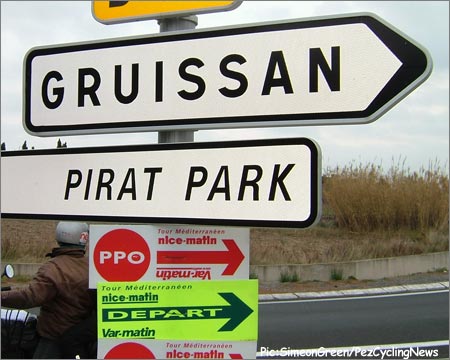 The Tour of the Med kicked off this week with a double header in the form of a Team Time Trial in the morning followed by a road stage in the afternoon. The small seaside town of Gruissan in south eastern France was the place to be if you weren’t sitting in a restaurant with your loved one on February 14th. PEZ was front row for all the action…

The difficult first stage TTT took the teams over the Col de la Clape before allowing only enough time for a rather ‘rapide’ French lunch before straddling the bikes a measly 2 hours later for stage 2, Gruissan to Agde.

First things first
After a very early start and a long drive from my home near Toulouse to Gruissan including an in-car breakfast, the first action of the day was to find the Palais Des Congres in Gruissan to get our Media passes and accreditations. With all the paperwork out of the way, it was time to check out the team area. 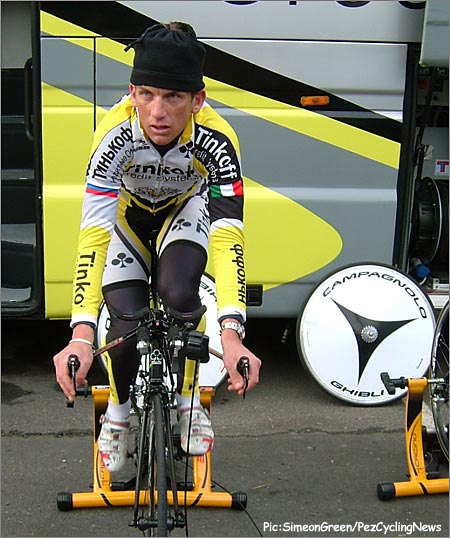 • Tyler Hamilton was back on a TT bike after his two-year suspension from the sport. Warming up alone ahead of his teammates, Hamilton was obviously keen to get back on the bike. Tyler started the season with the Etoile de Bessege last week and stayed in the region for the Tour of the Med which winds its way along to coast to finish in Italy. The final stage into San Remo will give the teams and riders a good chance to check out their form of the same roads as the finish of the great Milan San-Remo. 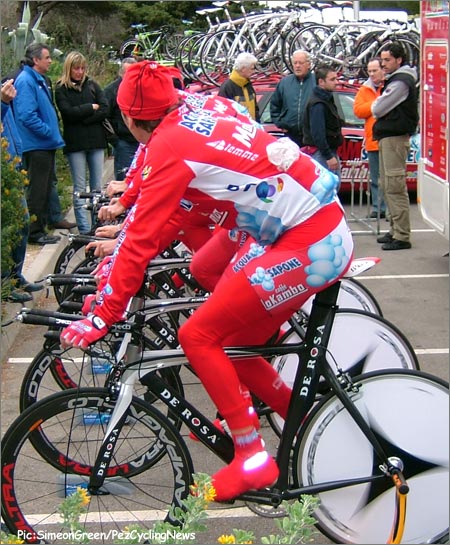 • Although the chilly, cloud covered weather was not warming up, the riders were. They slowly emerged to spin the legs and get their heart rates up in preparation for the hard effort to come. Warm hats and thick jackets were the order of the day. 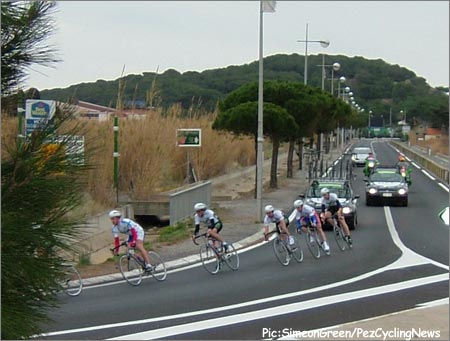 • The Stage1 Team Time Trial started along a slightly rolling, windy coastal road. Roundabouts and speed bumps kept everyone on their toes this brisk Wednesday morning.

• After a few kilometers on the coastal road the riders turned right into the woods and muscled their way up the 7km long Col de la Calpe before descending at breakneck speeds of over 80kph (50mph) down a descent full of tight corners towards the finish back in Gruissan. 80kph cornering on Time Trial bikes… with strong winds. These guys are either totally crazy… or very very good. It was an impressive show of skill and team coordination. 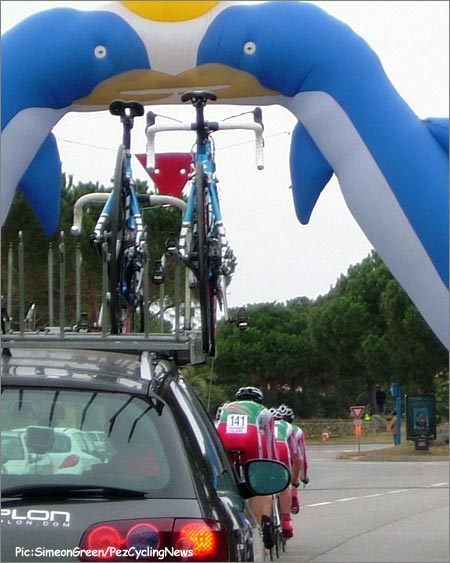 The Flame Rouge that marks the final Kilometer in the Tour of the Med showed that the organizers had a sense of humor in adding a little seaside flavor to the event. Personally I thought there was something fishy about that final kilometer.

Gone with the Wind 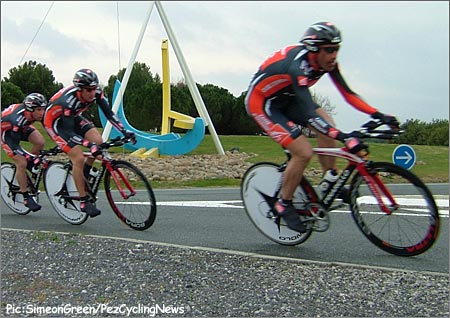 • The Caisse D’Epargne team set the fastest time of the day averaging just under 50kph on the 26.2km course to finish in a time of 32 minutes and 54 seconds. 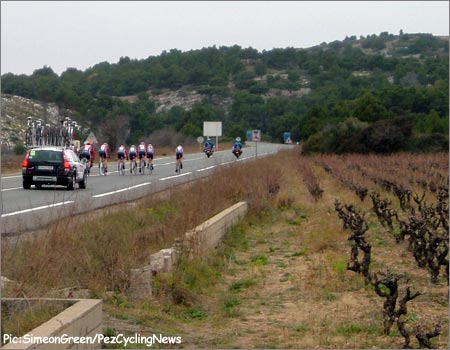 • The grape vines on the right have yet to show signs of life, but Caisse D’Epargne are already halfway there. They were one of the few teams to stay together finishing with all 8 riders in the same time. Spain’s Ivбn Gutiйrrez was the first to cross the line, making him the official leader and wearer of the yellow jersey for the afternoon’s Stage 2.

Stage 2: The Return of the Med
After a very short lunch break, the riders were back at the office for stage 2 from Gruissan to Agde. The course was mainly flat with a lot of wind and some afternoon rain that came in to ruin the romantic image of the Med and make the roads slippery enough to introduce crashing into the race equation. 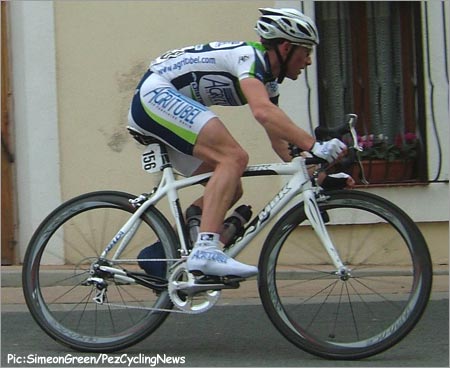 • Only 3km after the start, French neo-pro Romain Feillu took off like a madman…alone! The young Agritubel rider who finished 2nd at the Espoir Worlds last September was seemingly keen to show that there is little difference between the amateur and the Pro ranks. Romain stayed out alone for the majority of the 107 km stage and held a maximum advantage of over 5 minutes over the main field. With less than 15km to go, Romain Feillu crashed on a corner which precipitated his capture. The “main field” or “chase group” depending on who you asked, consisted of some 30 odd riders.

• The finishing loops around the town of Agde on wet and slippery roads saw numerous crashes, but in the end it was Lampre Fondital’s Daniele Bennati who took the win. Bennati also crashed in the finishing stages of the race, but came back strong and took the win ahead of Roberto Petito from Liquigas and Milram’s ex-World Champion Igor Astarloa in his debut race since leaving Barloworld for the Milk team.

• The wet and windy stage 2, combined with the morning’s difficult Team Time Trial left its mark on the riders’ faces. Austrian climber Wolfgang Murer from the Elk-Haus Simplon team described the race for Pez and said: “ahhhh, yaaah, it was strange race eh, yahh very strange. One rider off the front, lots of wind, slow racing then fast racing… very strange.”

Happily Ever After
And that marked the end of a thrilling first day in the Tour of the Med. As for palm trees, sun, sea and sand… well hopefully the weather will improve over the next few days and both the riders and spectators can get some of what they came for at the Tour Mediteraneen. Less rain, less wind, more sun… not sure where the sand fits into the equation however.