PEZ Goes to the Movies: Alf Engers aka “The King”

By Leslie Reissner On Mar 15, 2020
Share
Like PEZ? Why not subscribe to our weekly newsletter to receive updates and reminders on what's cool in road cycling?

The British have a great love of the idiosyncratic – one need only watch a few episodes of “Monty Python’s Flying Circus” or peruse some chapters of Edith Sitwell’s “English Eccentrics” as proof – and this enthusiasm for the oddball has extended to bicycle racing. Before British Cycling conquered track racing and before so many Grand Tours fell to British riders after that, the British had a warm enthusiasm for time trialling, a cultish and purely domestic activity. And one of the biggest fishes in this tiny pond was Alf Engers, nicknamed “The King”. 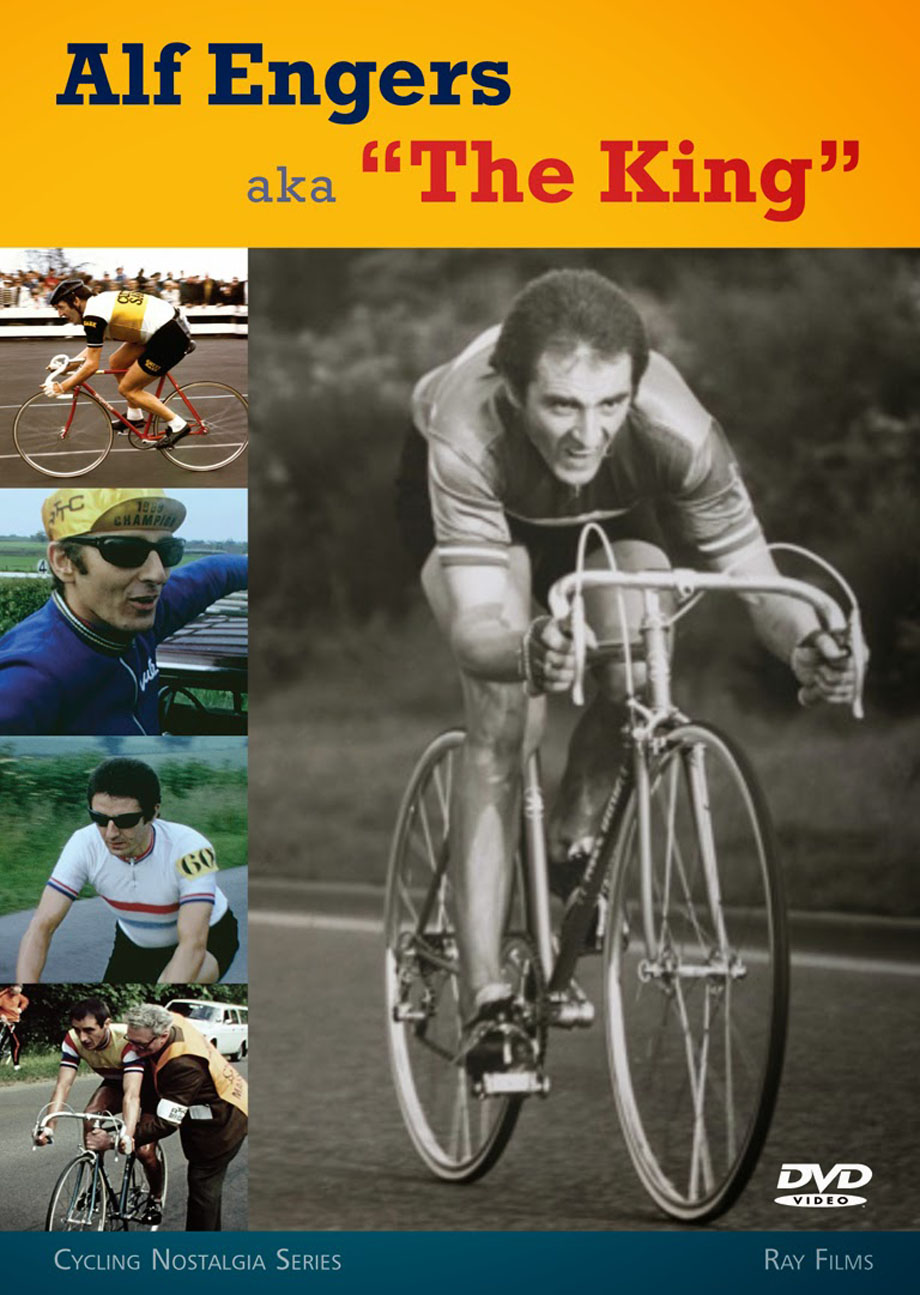 British filmmaker Ray Pascoe has made a vocation out of chronicling British cycling history when it was all a very local affair. We have in the past described the weird resistance to road racing in Britain and the growth of the home-grown time trialling, designed to attract the least attention possible as cyclists were encouraged to wear black, show up extremely early hours to race, and know where to show up through a code system. Although meant to avoid trouble with Officer Friendly, it seems to have become savoured by practitioners for its peculiarity. Its governing body was the Road Time Trials Council (RTTC), formally established in 1937, and now a corporate body known as Cycling Time Trials as of 2002. Time trialling remained the cornerstone of British racing even as road racing began to lose its shackles. Into this unusual environment came Alf Engers, ready to race. 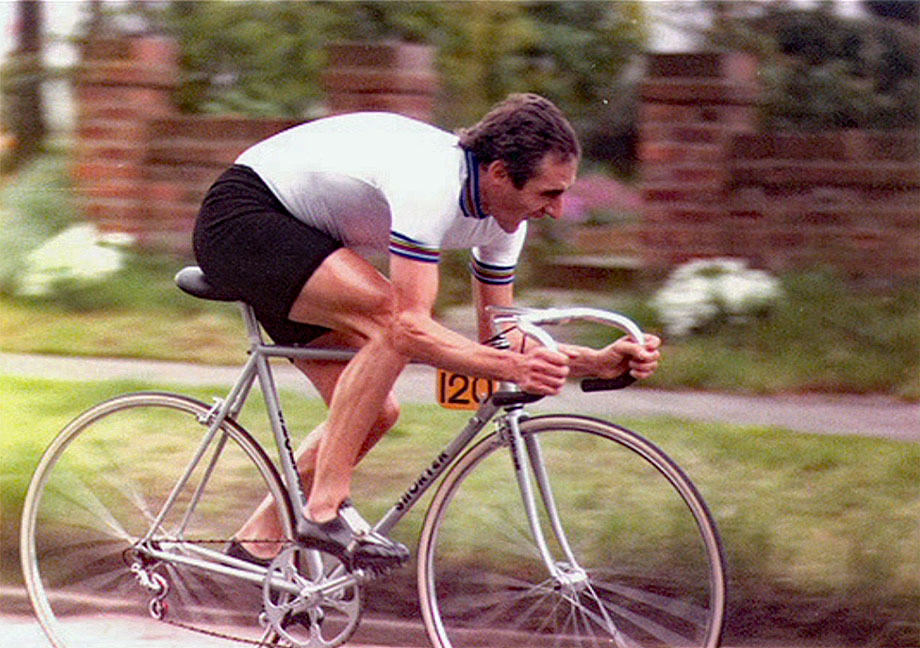 Alf Engers was born in London in June 1940 and worked as a pastry cook in the family bakery business. He was a good athlete as a youngster, competent in swimming and as a runner in addition to his cycling but at age 14 he collided with a car and the ensuing operation (which actually removed his smashed kneecap and tied the ligaments together) ended his running days. But not his cycling efforts and joining a local club at 12 he began his racing career. 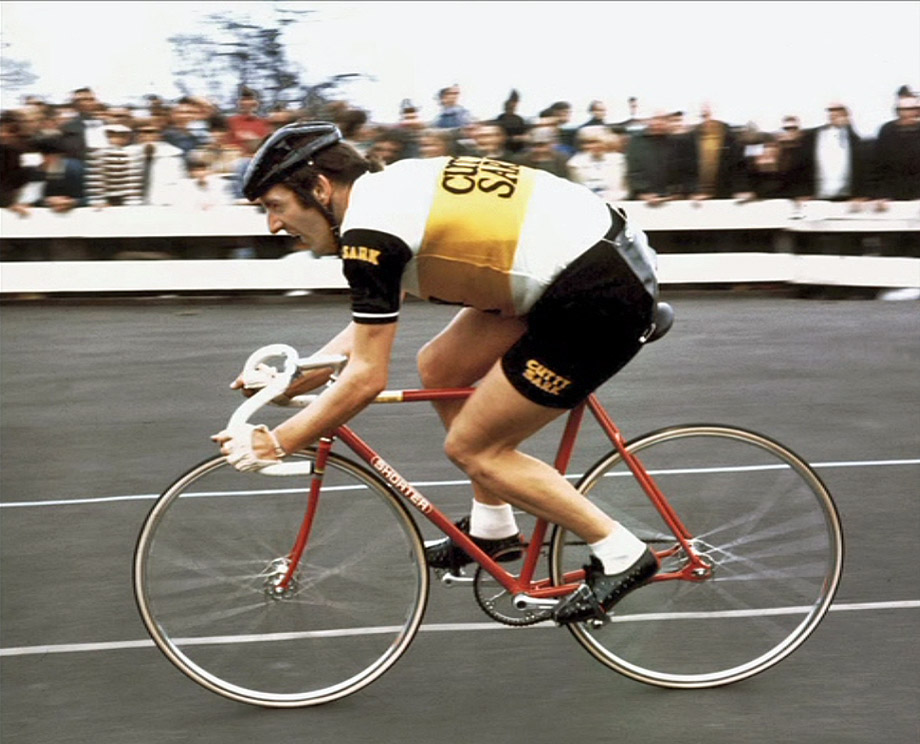 All of this is told in a highly engaging way in ‘Alf Engers aka “The King,”‘ which features not only vintage footage but also interviews with the man himself as well as interesting characters from the time trial scene. Standouts must include the identical Higginson Twins, Stan and Bernard, who inspired Engers to switch in the 1950s from the limited road racing (mainly circuits in parks) to time trials. The DVD was made in 2014, the year Stan passed away, and Bernard died in 2019 at 87 so it was nice to still be able to capture them on video. 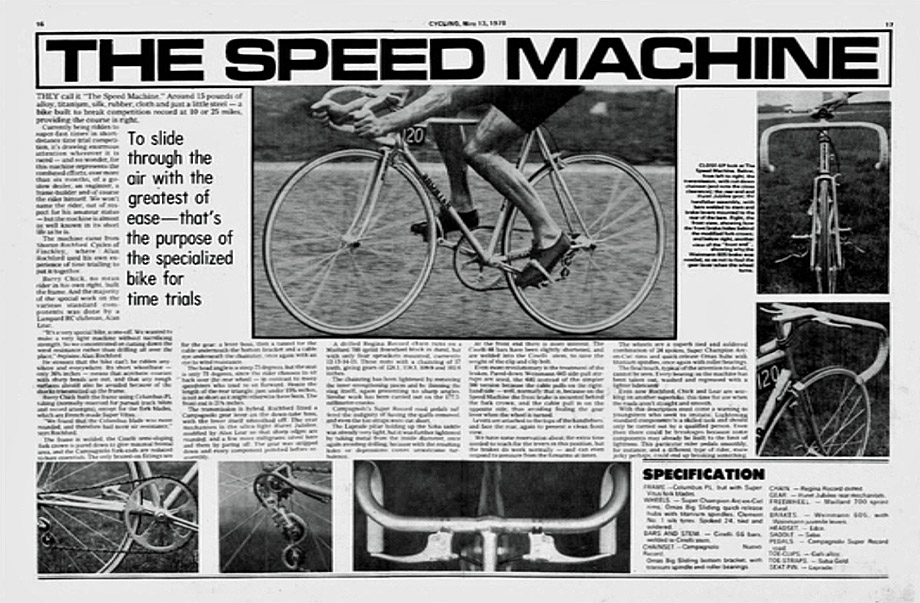 Engers, who had been thrown out of school as a discipline problem, continued to confound authority and received his first official warning from the RTTC at 16 already. In 1959 he beat the British record for the 25 mile time trial, setting a new mark of 55 minutes 11 seconds. But things did not go smoothly for him and his conflicts with bureaucracy continued. In 1960 he raced in a three man time trial against Britain’s Olympic team, easily beating the Chosen Ones and then being told that the win was “unpatriotic”. In any event, the British had no money to send a time trial team to the Olympics in Rome and tried to use their road racers for this discipline, failing in both events. 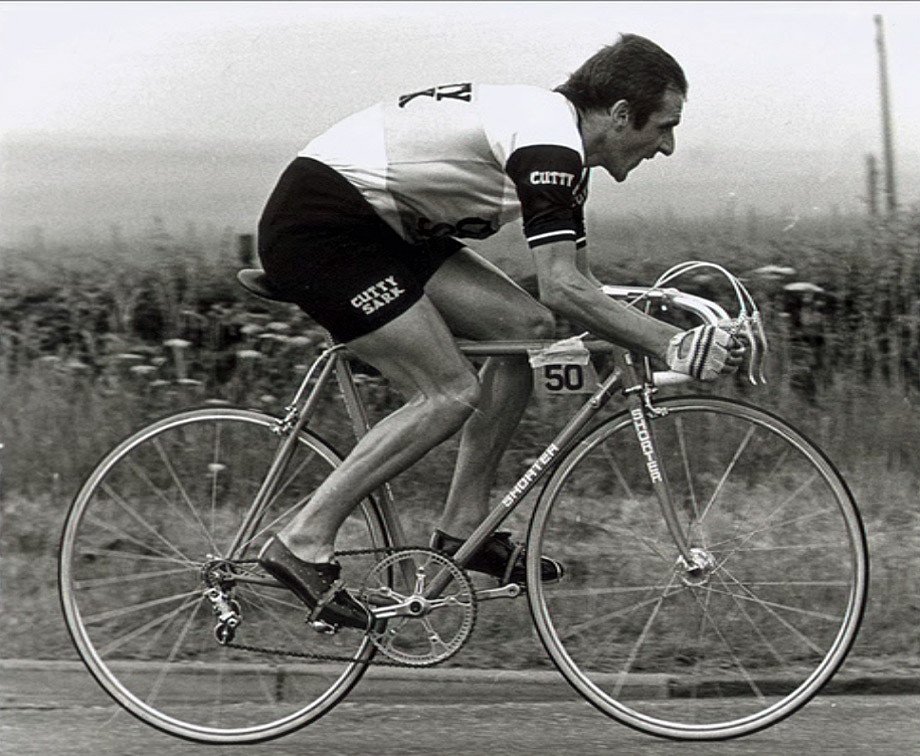 Also in 1960 Engers signed up as an “independent”, something between an amateur and a professional which was meant to give a rider two years to consider which direction he wanted to take. Engers received some sponsorship for a local bike shop but in 1962 asked to be reinstated as an amateur. He was turned down repeatedly, year after year, and was not able to return to RTTC-sanctioned events until 1968, then taking the national championship a year later.

He then went on to dominate the 25 mile time trial for the next decade, earning himself the nickname of “The King”, and getting three suspensions by the RTTC. Only one other rider between 1969 and 1990, Eddie Adkins, held the record for this distance, and then only for a few minutes as Engers took it away the same day.

On that day in 1978 Engers rode the 25 mile course on the A12 road in 49 minutes and 24 seconds, a record remaining unbroken for twelve years and the emergence of new bike technology.  Engers himself did not do much more riding after this impressive accomplishment, turning his hand to a few triathlons in later life, but now appears to be content with fishing as a hobby. 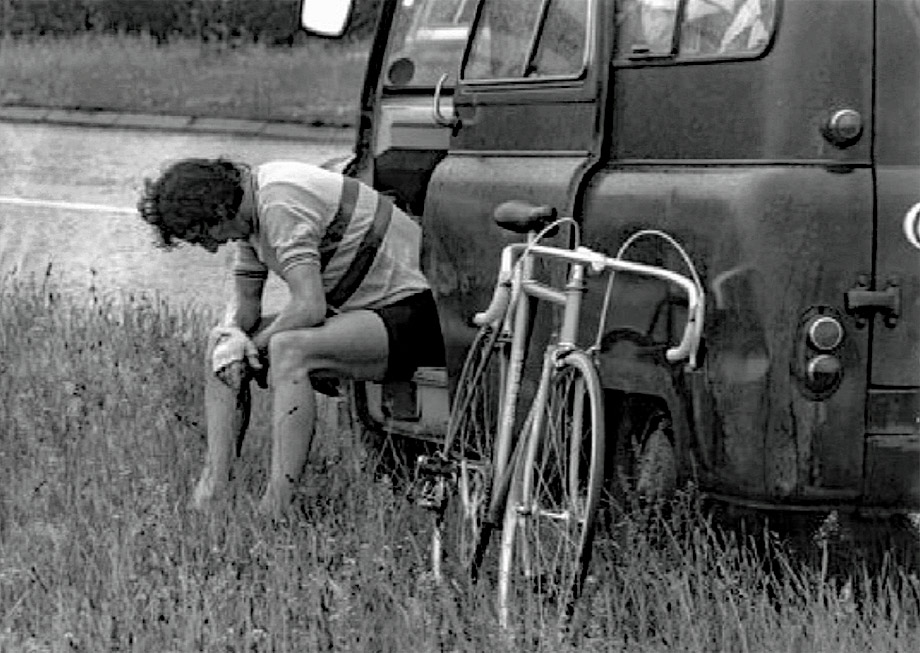 On the subject of bike technology, Engers first was a member of the Drillium school, putting holes wherever possible in components and frame to make the bike lighter but then switched to making the bike more aerodynamic. Engers rode a big gear for the day (57×12 or 13) and was able to get low on the bike. He and Barry Chic, a bike builder with the Shorter Rochford bike shop, came up with some novel ideas, including putting the front brake callipers behind the fork and the levers behind the handlebars to reduce drag. Of course, the RTTC then declared the bike, their 1978 Speed Machine, too dangerous and banned it. It would also not allow Engers to use a skinsuit, decreeing that time trials had to be ridden with a separate jersey and shorts. 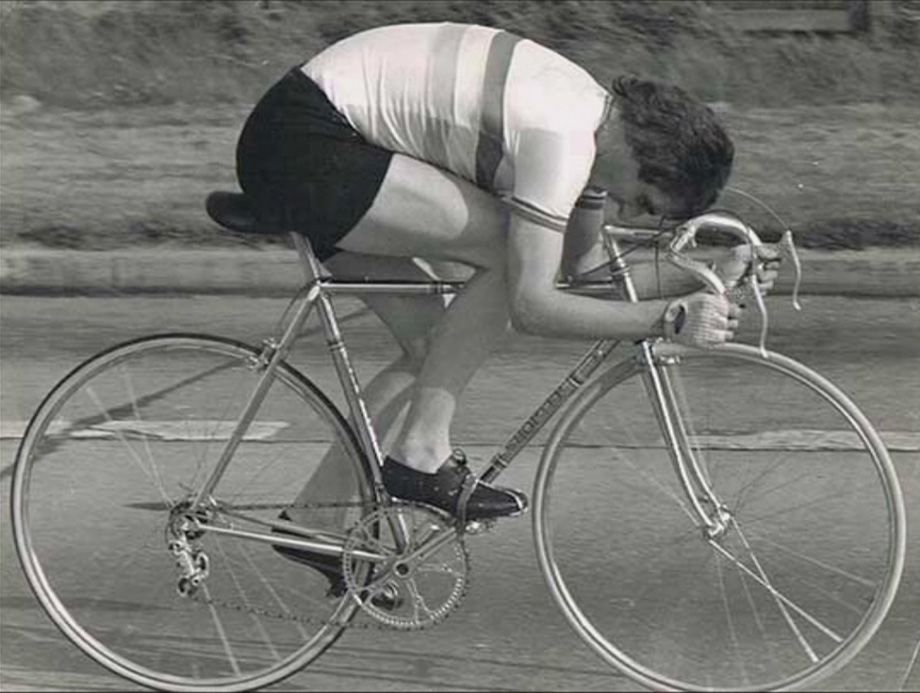 Engers, the Cockney entrepreneur, was considered something of a showman in the staid and placid world of British time trialling. Sporting an earring and wearing a full-length fur coat, he would arrive at races with a big Jaguar. An excellent pursuit racer one can only wonder what he could have achieved given more leeway and the opportunity to race before bigger audiences at the Olympics or even as a pro on the road. We shall never now but ‘Alf Engers aka “The King”‘ provides an entertaining look at an insular world. It is professionally produced (although there might be more about fishing than we need!) and includes some extra features such as amateur video from the 1970s time trial scene. 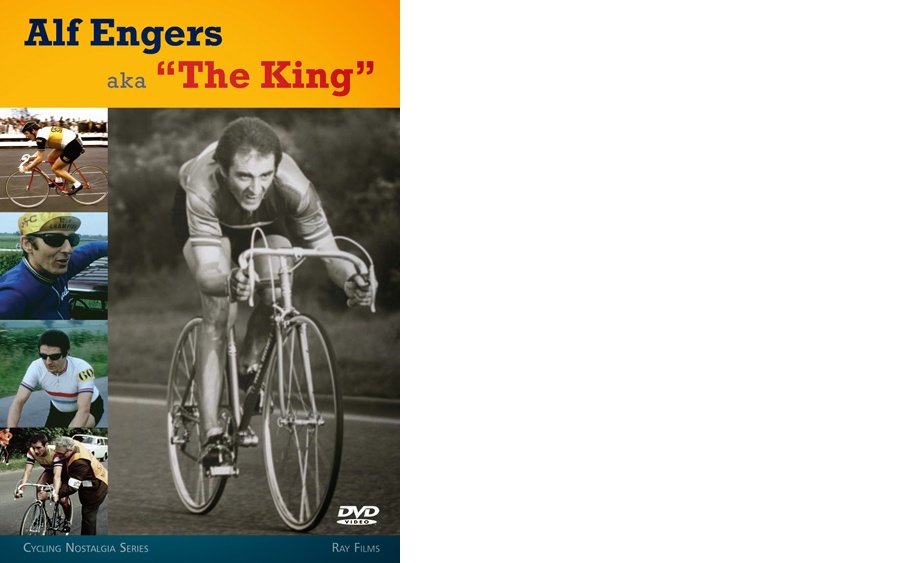 Alf Engers aka “The King” DVD – A Film by Ray Pascoe
76 minutes in length, with 38 minutes of bonus features
Rayfilms, 2014 (All Regions)

(please note that Mr. Pascoe has a DVD about Beryl Burton which will be reviewed here next week and offers both DVDs for a combined shipping and handling price of 7.50 GBP)

# All photos taken from the film. #

You can read Ed Hood’s review of the book I LIKE ALF.

When not considering how a fur coat and earring might improve his time trialling, Leslie Reissner may be found beating the clock at www.tindonkey.com