Film Review: Bike racing is hard, whether a city crit or a local time trial. Then it gets really hard if you are a pro at a Classic race or a Grand Tour. Then you have people who like to sit on their bikes for a long, long time: ultra racers who don’t do it for the money or even the glory but for the challenge. The toughest ultra race is the Race Across America (RAAM) and a new film (with special screenings in Canada on July 15) shows just how tough it can be—and not just on the riders. 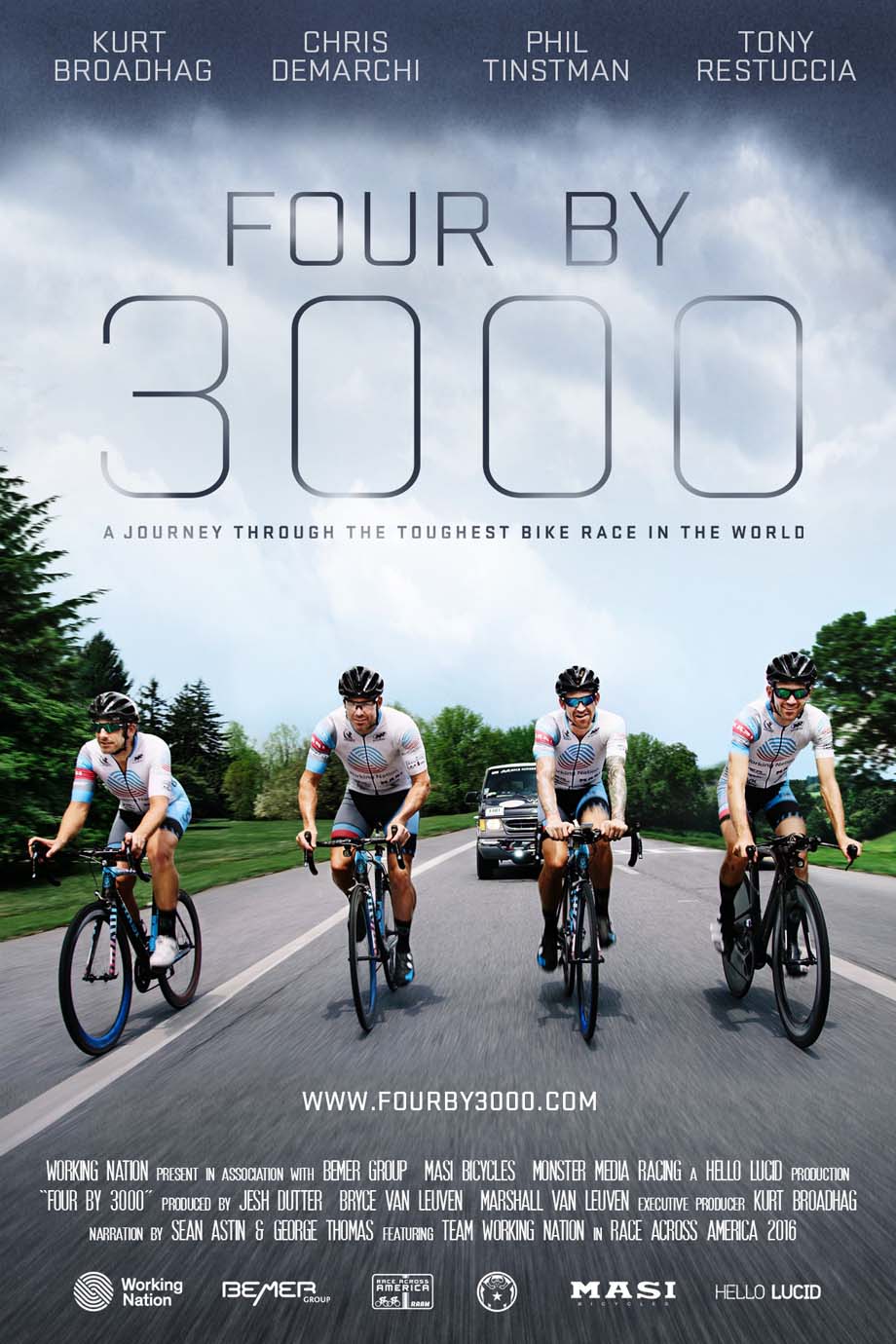 “Four by 3000” is the latest offering available through Demand Films and it tells the story of a four man squad, Team Working Nation, that raced in relay fashion at the 2016 RAAM. The group of friends—Tony, the vegetarian climber; Phil, the humorous commentator; Chris, the bulky and emotional time trialler; and Kurt, who produced the film—were not strangers to RAAM, have first entered it in 2014, then returned in 2015 to win the race. Their goal in 2016 was not only to repeat as winners but to also set a new course record.

The film opens with a comment by a RAAM official that the race is great because you can’t ride the Tour de France but anybody can sign up for RAAM. This is a bit of hyperbole, of course, since nobody is doing RAAM without considerable support. The Working Nation team is sponsored by the Working Nation non-profit organization, which seeks to educate Americans about the looming unemployment crisis as automation and new technologies advance rapidly. The CEO of Working Nation appears to briefly to explain the logic of sponsorship, which, frankly, is not entirely clear. On the other hand, Masi Bikes has an obvious interest in supporting a winning team like this one. 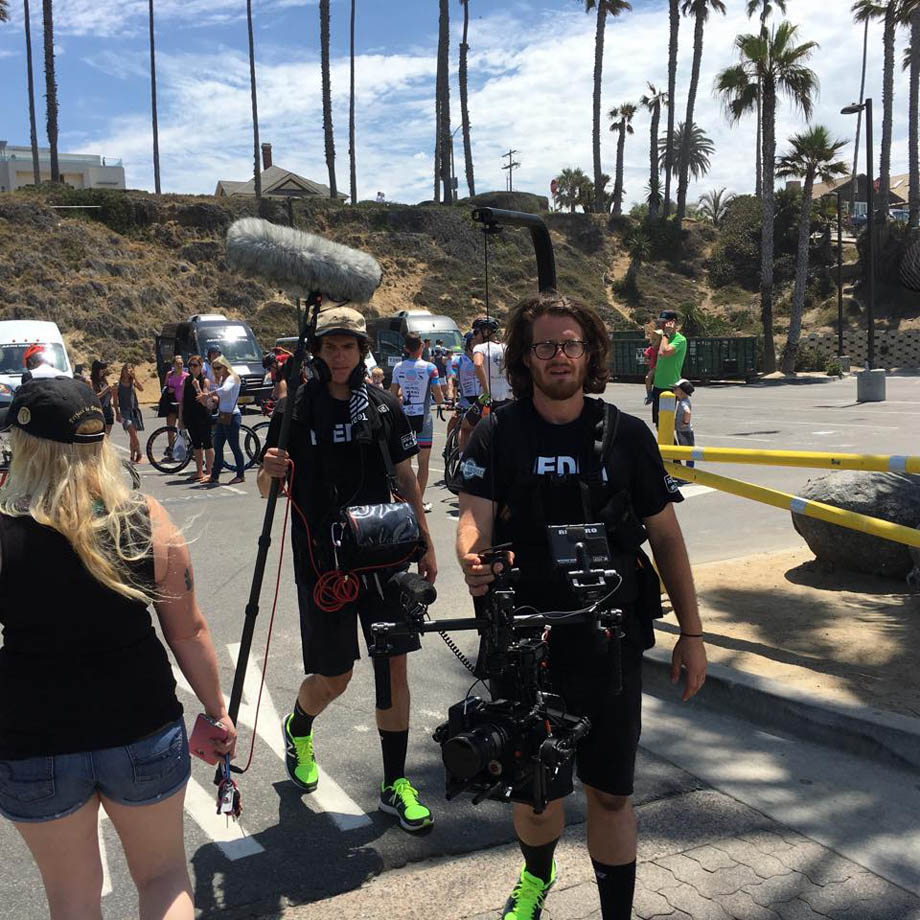 The logistics to support a four person team are mind-boggling and much focus is put on the members of the team who are not actually riding bikes. There is a flotilla of five vehicles—three support vans, a media van, and an RV for showers and sleeping—staffed by sixteen people. They are all identified by name and throughout this ordeal of 3.069 miles they all manage to keep their positive perspectives.

Departing from Oceanside, California after a year of preparation, the first challenge occurs only 150 miles into the race when the most important van, No. 1, has an electrical meltdown as the massive load placed on the system from all the electronics—wires are everywhere—fries something. An anxious search for a new battery is made but all the stores are closed. But there is a boat shop in town where the generous owner (who justly receives credit at the end of the film) loans the team a battery from a boat. It is a stopgap but now all the carefully organized plans of which vehicle does what is thrown helter skelter and we see some serious improvisation at work. In spite of this, the team is still leading the race.

But riding through California and then Arizona is hard. There is a brutal climb, the Glass Elevator, which occupies the harsh landscape impressively but dauntingly, and the heat is extreme. Chris notes that it is only Day 2 and he is already exhausted. The temperature had climbed to 129ºF and even in he early evening it was still 105ºF. The RV’s air conditioning system cannot cope so resting in it must be nearly impossible. One of the crew members, Phil Kramer, brilliantly improvises a cooling unit with an ice chest, some aluminum ducting, a fan and a lot of duct tape.

Of course one of the less-appealing aspects of ultra racing is riding at night. The race takes the team through glorious Monument Valley, of which they see nothing, and in fact very little night riding is shown. What is shown is some truly spectacular scenery and one is struck by the fragility of cyclists pressing on in such an overwhelming landscapes. 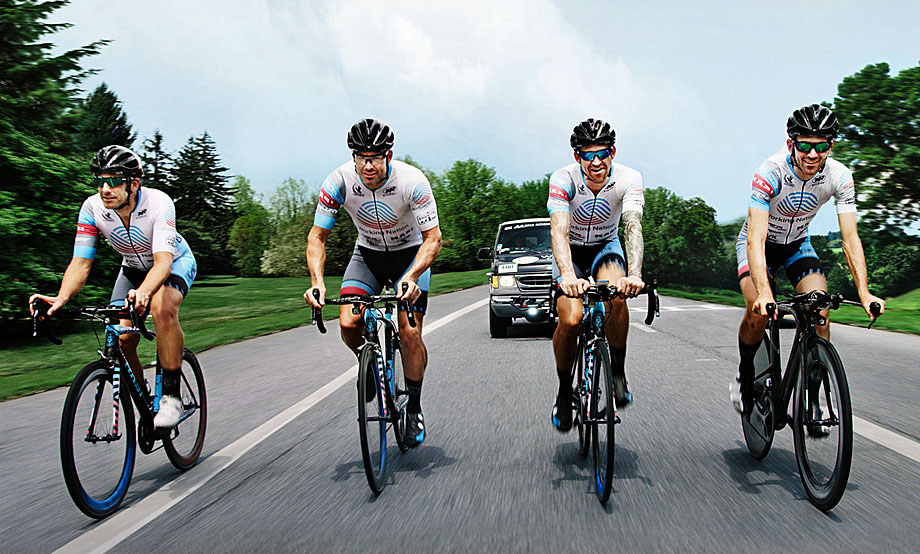 The team functioned better as the race continued, although by Day 3 everyone is starting to look sleepworn and unkempt. After each 20 minute shift, a rider would be replaced and then he would flop into the van. Considering that the vehicles were running pretty much 24 hours a day, it speaks highly for human endurance beyond the actual riding that one can only imagine the fumigation measures necessary by the end of five days. There is fast food involved too as the riders are ravenous all the time—Chris joyfully stuffs himself with Big Macs, pizza gets delivered, Tony has added organic turkey to his now non-vegetarian lasagne.

The scenery continues to amaze as the team crosses the highest point in the race, Wolf Creek Pass, at 10,875ft (3,309m). The team presses on, although oxygen is sparse, and Chris is delighted that he has reached his highest speed ever on a descent, getting to 61 mph (98 km/h). This must have taken some nerve as not only is the pass windy but there appears to be considerable heavy truck traffic.

After the dramatic scenery of the Far West, Kansas arrives flat flat flat, which was a relief to Phil who notes it requires no thinking but just pedalling onwards. But the team was doing plenty of thinking. They had caught a broadcast on RAAM Media where some members of an eight-man team, DMS, talk about catching Team Working Nation as they are bound to crack. The members of Working Nation clearly take this as a challenge and excellent motivation. They still want to; a) win the race; b) set a course record doing so; c) beat DMS.

The endless race continued east where we meet a pair of dedicated RAAM fans by the roadside in Indiana. They describe RAAM spectating as something they live for. They must have a lot of time on their hands as some of the RAAM riders in 2016 would take over 11 days to complete the race, although the winners did it in something under 6. There were people in truly out of the way places cheering the racers on, and wildly hospitable people at the time stations.

By Day 4 sleep deprivation is a big problem and the riders get no relief as entering Ohio they come across a massive 300 mile wide thunderstorm. But racing means persistence and on they ride through terrible conditions. Endurance racing also brings out some strange behaviour and the riders are clearly getting delirious and snappy. It is clear that they have great trust in their crew but moments of stress become more obvious. Remember, RAAM is a race in which the support crew of five-time solo winner Jure Robic locked their van so he could not get in and attack them during the race.

All is forgiven as Team Working Nation approaches the finish line just outside Annapolis, using up their matches with a two man time trial. There is great joy all around although, like all big adventures, there is also regret that this intense experience running over a week is actually completed and the team, riders and crew, will now disperse. Well, not entirely: a postscipt notes that the team came back as an eight member one in 2018, and did some more amazing riding.

“Four by 3000” is superbly filmed and a fascinating inside portrait of how a team functions. Much of what is shown is not so much the riders out on the road but what happens in the vans, or at transitions, or at timing stations. All the hard work, the investment of time and money, is played out against the magnificent backdrop of America the Beautiful. RAAM is essentially a transcontinental time trial, involving none of the team vs. team tactics of the Grand Tours, and the Race Across America is not enough for some people, as the blossoming of unsupported ultra races has shown. Nonetheless, RAAM remains a monumental event and “Four by 3000” is a credit to it. 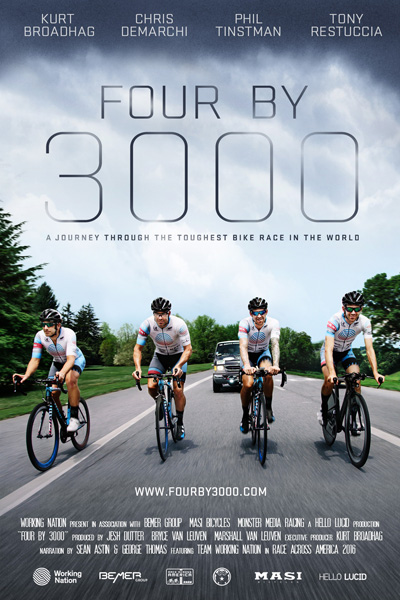 When not considering that all his rides are focussed on finding bakeries or beer, Leslie Reissner may be found regretting that looking good and going fast are not necessarily connected at www.tindonkey.com