Film Review: Many sports – baseball, football, hockey, soccer – offer fans fantasy camps to let the average person get a feel for what the Real Thing is like. Every cyclist’s fantasy, perhaps, is to ride in the Tour de France but sometimes it might be better for that wish to be unfulfilled. The recent film, “Le Ride,” shows what happens when two enthusiasts decided to honour the first English-speaking team in the Tour and duplicate that 1928 event today. 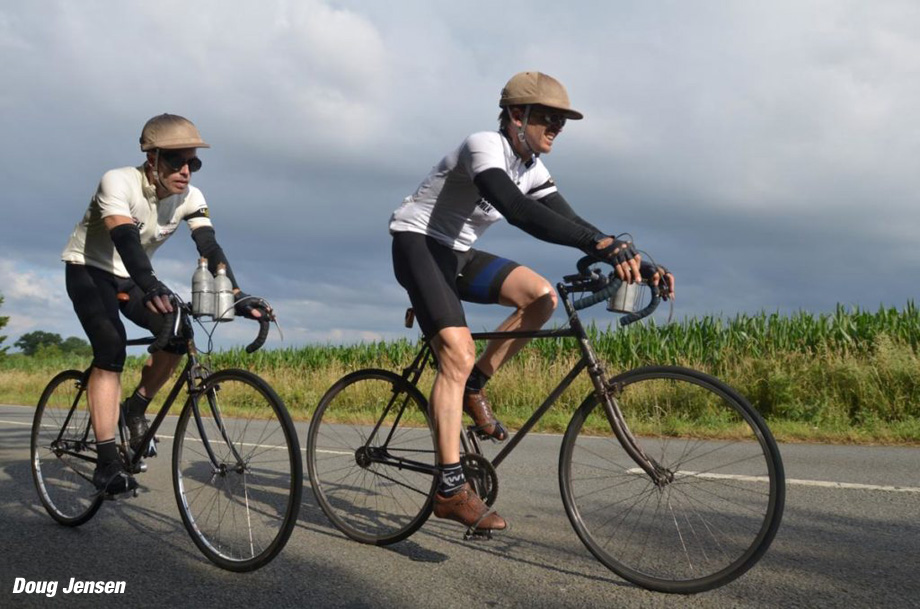 Phil and Ben on their epic adventure

New Zealander Phil Keoghan is highly visible as the host of CBS’ “The Amazing Race” reality show and has many exploits to his name, including some spectacular underwater dives and even a bungee-jumping world record. In 2009 he rode across the United States, averaging 100 miles daily, for a charity event that raised $500,000 for multiple sclerosis research. He made a documentary, “the Ride,” about that 3,500 mile trip. 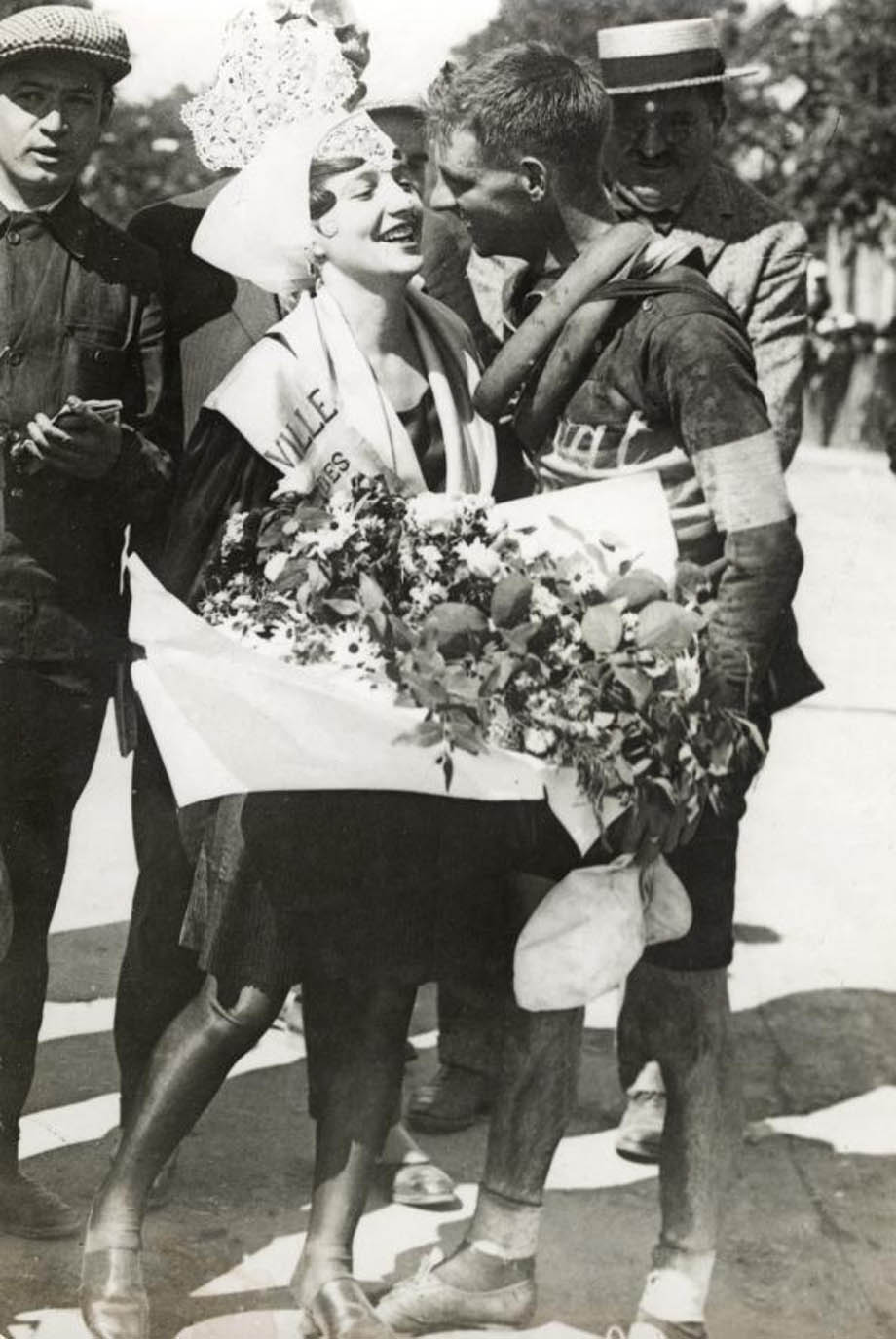 Mr. Keoghan learned about the Australasian team (three Australians, one New Zealander) at the 1928 Tour de France and was surprised that the Kiwi rider, Harry Watson, had come from his hometown of Canterbury. After considerable research he decided to honour that team by retracing their route in 2013, starting on June 17 and ending on July 15, the same dates as the 1928 Tour. This meant riding 5,376 kms (3,340 miles) over 22 stages, or 244 kms (151 miles) daily. There were four rest days. And he was to do this with his riding partner Ben Cornell using period bicycles.

The resulting film is a highly entertaining mixture of accounts from the 1928 race and Phil and Ben’s Really Hard Ride. The Australasian team arrived in France expecting to be joined by six Europeans to make up a ten man team but this did not happen, nor did their French support crew ever materialize. Led by famous Australian rider Hubert Opperman, they nonetheless were ready when the peloton rolled out of Paris, although the local press gave them no chance of winning and predicted they would be out after the first stage. 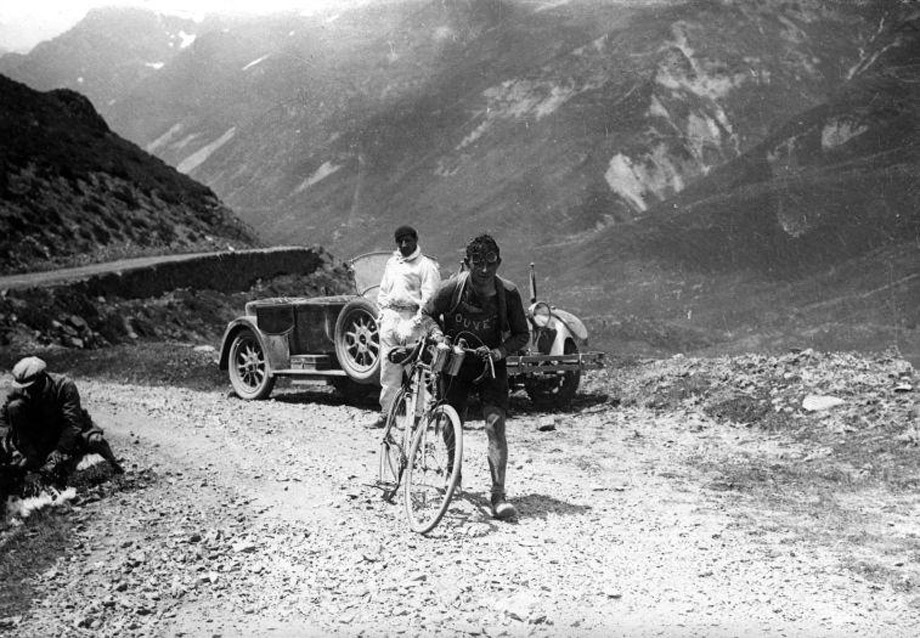 The Tour de France was quite different from the race we know today as the Tour’s founder Henri Desgrange was constantly fiddling with its format. In 1927 it had consisted of nothing but team time trials across France and the 1928 race retained those in 15 of the stages. There was no rule about how many men would be on a team except a maximum of 10, which would be an obvious disadvantage to the four Australasians as several teams had a full complement, although the ultimate winning team, Alcyon, did not. Even stranger, fresh riders were allowed into the race as domestiques part way through, although not allowed to officially win a stage or the race overall! 162 riders entered the race, the highest number to date, but 111 of those were “touriste-routier” cyclists who rode along as independents and had to be self-supporting. Phil Keoghan, in his narration, does not mention the difference between the pro riders and these amateurs, not a single one of whom completed the race.

When the Tour riders went out, they had modern equipment for the day, although “modern” still meant very heavy bicycles by our standards. While the first Tour winner in 1903 had a bicycle that weighed 18 kg (39 lbs), by 1928 a more typical weight was 11.5 kg (25.3 lbs), still hefty compared to today’s 6.8 kg (15 lbs) limit but actually about the same as bikes used in the early 1960s. The difference was clearly in having variable gearing and effective brakes, the lack of which obviously added to the trials of the Keoghan party who, it must be remembered, were riding 85 year old antiques. 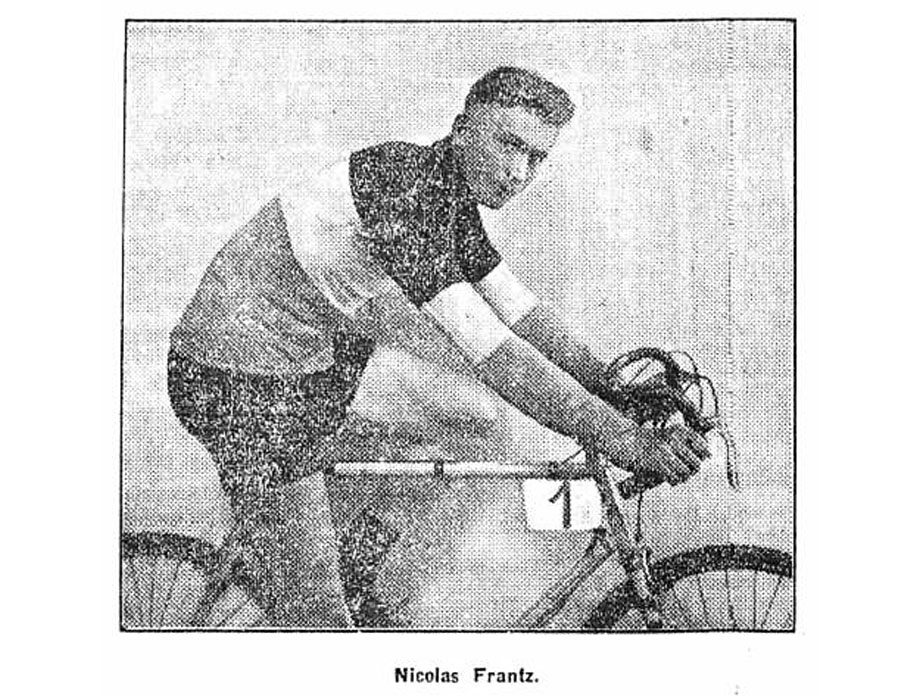 Postcard of Nicholas Frantz of Luxembourg, who won the Tour in 1927 and 1928

The difficulty of these early Tours cannot be overstated. Along with their primitive bicycles, rides had to contend with massively long stages, very poor roads—many unpaved—and nutritional issues. Tires constantly flatted and Desgrange’s rules were designed to weed out almost everyone. During Stage 19, race leader Nicolas Frantz’s bicycle broke and he ended up riding the last 100 kms on an undersized woman’s bicycle. Incidentally, as the previous year’s winner, Frantz started in the yellow jersey on the first day and kept it until the end, the only time this has occurred in the race’s history.

At least the modern adventurers had LED lights and helmets, as well as GPS and cellphones to help. One of the other issues, of course, is that in 1928 the racers simply took the main roads from town to town but in 2013 many of those roads were now limited-access highways and closed to bicycles so often getting lost, even with the support team, added to the woes. And the mountain stages, where navigation was not so much of a problem, were terrible — we watch Keoghan descend the Galibier at what appears to be 7 km/h and the squeal of the quasi-useless brakes are a constant part of the film’s soundtrack. 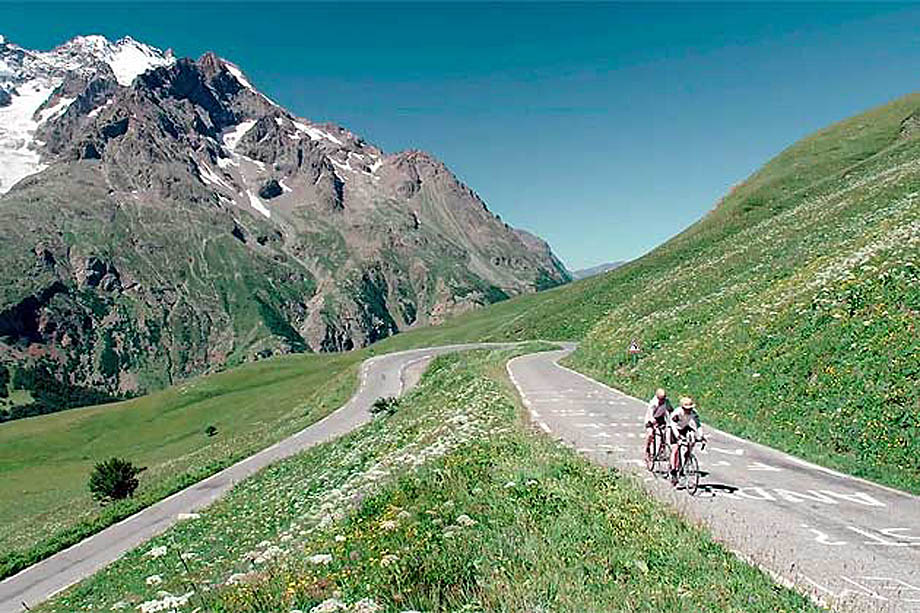 Ben and Phil hit the climbs

The mountain stages are incredible and the fabulous scenery is balanced with Phil and Ben’s epic suffering. Leaving in the dark and arriving in the dark almost every day, they took 23 hours to complete one of the 1928 stages. Those four rest days must have seemed very short. And while Phil Keoghan mentions that the oldest Australasian team member was 38 and had to drop out, he does not mention that he himself was 46.

41 riders finished the 1928 race and the three remaining Australasians of the Ravat-Wonder-Dunlop team confounded the critics by placing well enough, with Opperman best at 18th. Amazingly, the sole rider who entered the race as the Thoman-Dunlop team, placed fourth. Belgium’s Jan Mertens also won the Tour of Flanders that year. 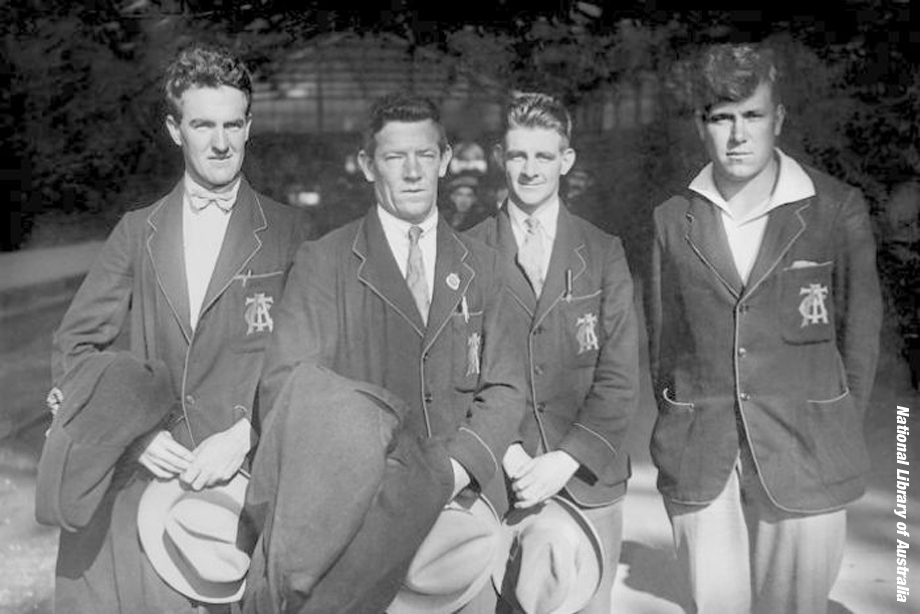 While a lot of this historical background is underplayed, it is commendable that Phil Keoghan’s enthusiasm for that 1928 team has led to this film to honour their efforts. All four riders lived into their 90s, a seemingly impossible actuarial result, and they were harbingers of the non-Europeans who would come to the Tour so many years later. But one must give a tip of the hat to Phil Keoghan and Ben Cornell as touriste-routiers who did not quit in spite of the many obstructions they faced and the remarkable physical demands they were able to meet although I was not convinced it was really necessary to do the ride in this way. Still, an enjoyable evening for cycling fans; the cinema in Ottawa was packed to overflowing when I saw it. 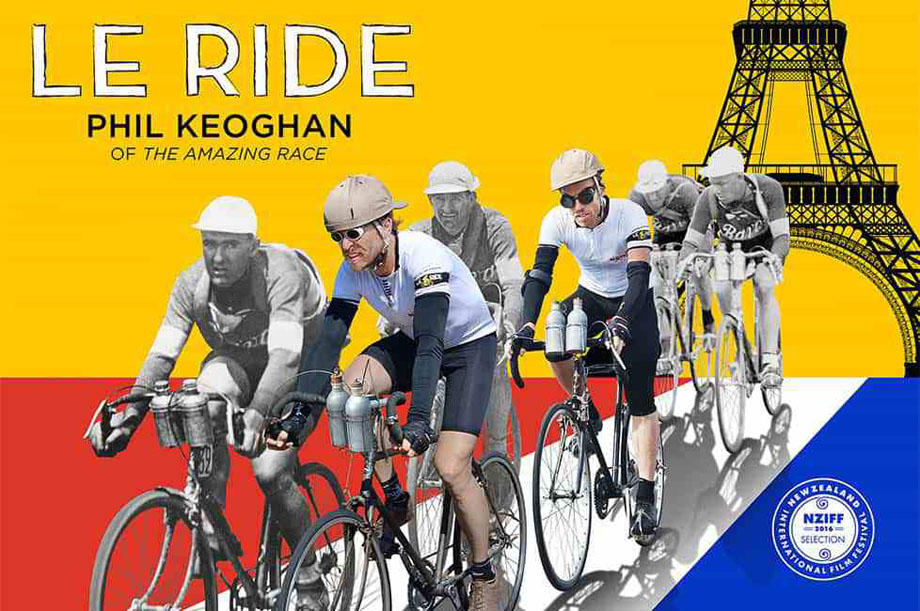 “Le Ride” screenings took place across Canada last week. They are arranged via Demand Film, which organizes screenings of independent films in Australia, New Zealand, the United States, Canada, Italy and Germany upon request. For more information, go to: https://ca.demand.film/le-ride/

When not reflecting how happy he is that his vintage bicycles only date back to 1975, Leslie Reissner may be found squealing his brakes at www.tindonkey.com