PEZ Goes To The Movies: North Of Nightfall

Film Review: There is diversity in cycling in Canada: you can do the urban thing and ride along the Rideau Canal in downtown Ottawa; you can race a fat bike across a frozen lake in Quebec; you can enjoy spectacular forest trails in British Columbia; or, as a group of four freeride mountain bikers do in the film “North of Nightfall,” you can mount an expedition to the High Arctic and enjoy some of the most dramatic scenery and challenging riding anywhere. On June 1, you can go to selected cinemas across Canada and be amazed.

Always on the lookout for an exciting place to ride, Canadian pro Darren Berrecloth, based on Vancouver Island, was intrigued by a video he had seen presented by a Canadian researcher studying glaciers in the Arctic. After making a reconnaissance of the area, Berrecloth brought together three other like-minded riders: the veteran Cameron Zink, and young up-and-comers Carson Storch and Tom van Steenbergen. An ambitious project was launched via Red Bull Media and the group set off for the ride of a lifetime. 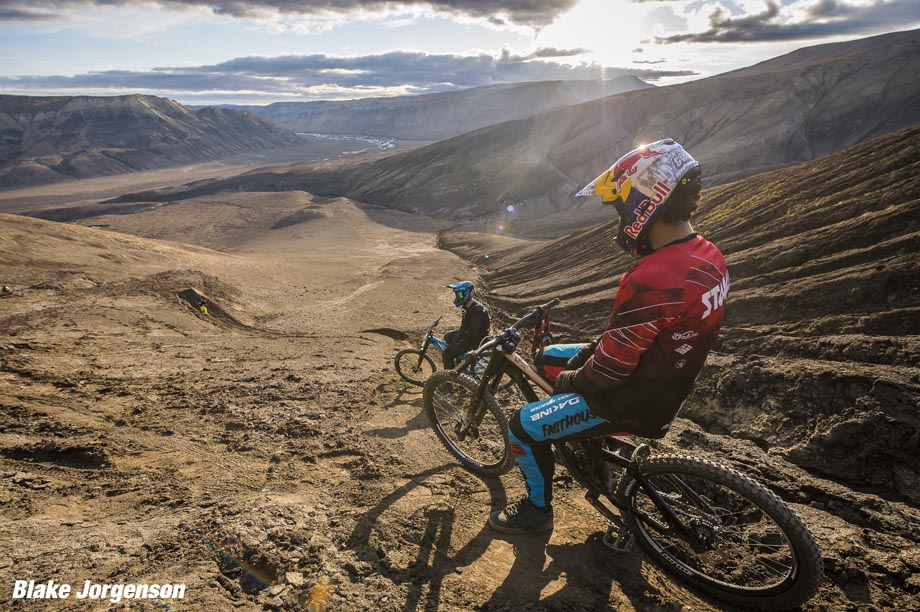 Members of the team assembled on Vancouver Island and then flew to Resolute Bay, population 198, on Cornwallis Island in Nunavut. From there, the group transferred by chartered Twin Otter and headed to their destination: Axel Heiberg Island, the second northernmost island in Canada, situated 1,200 kms from the North Pole itself. Covering some 16,000 square miles, Axel Heiberg Island (happily named after the financial director of Norway’s Rignes Brewery!) has some very unusual features. These include the remains of an ancient mummified forest, the saltiest hot spring in the Arctic, and nearly 2,000 glaciers. The treeless landscape, a true desert, is ruggedly mountainous, a very different scene from the usual Arctic tundra. And it was for these mountains that the cyclists had come. 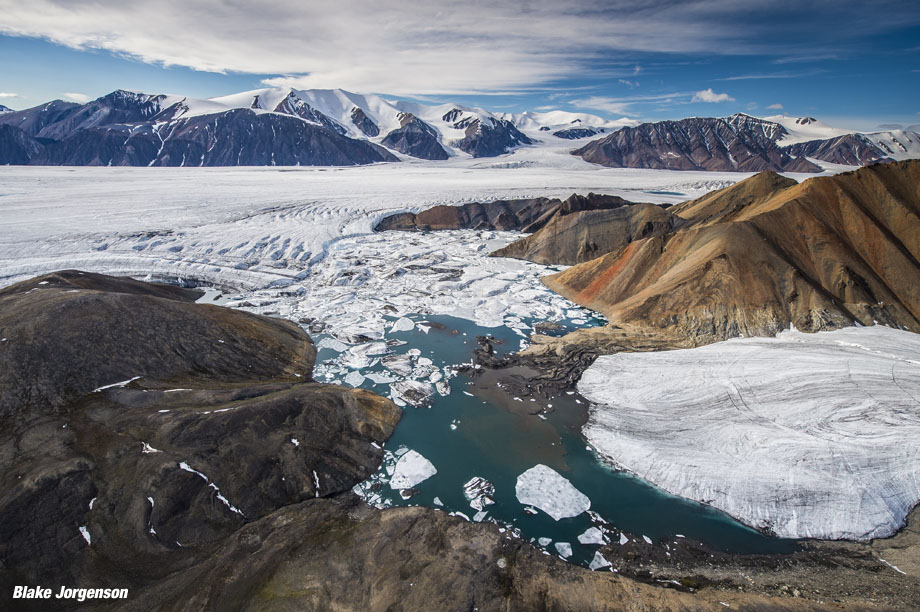 Not only is Axel Heiberg Island very rugged, it is very empty, with no full-time human habitation for seven centuries. It is winter there for nine months of the year, and between October and February in darkness. There are seasonal visitors to a research station operated by McGill University but the remoteness of the island required the team to undertake elaborate and expensive preparation. 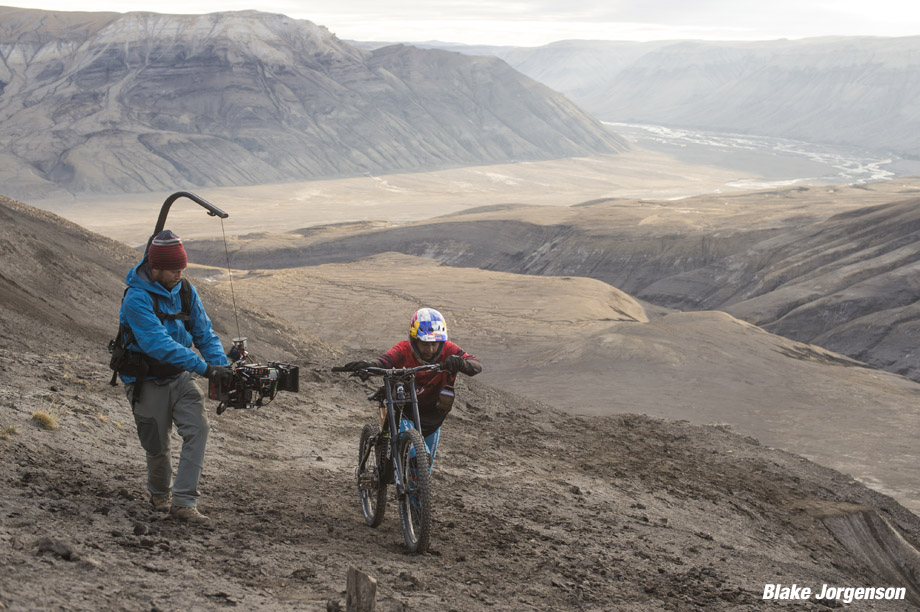 In addition to the riders and camera crew, there was a doctor, a camp supervisor and at least one armed Inuit. It was a novel thing to see electric fence rigged around the camp each night to fend off possible polar bear guests. The island also boasts Arctic wolves and hares, as well as the odd musk ox. On landing, one of the cyclists remarks that it looks like Utah in winter, just five times larger. Not even close. 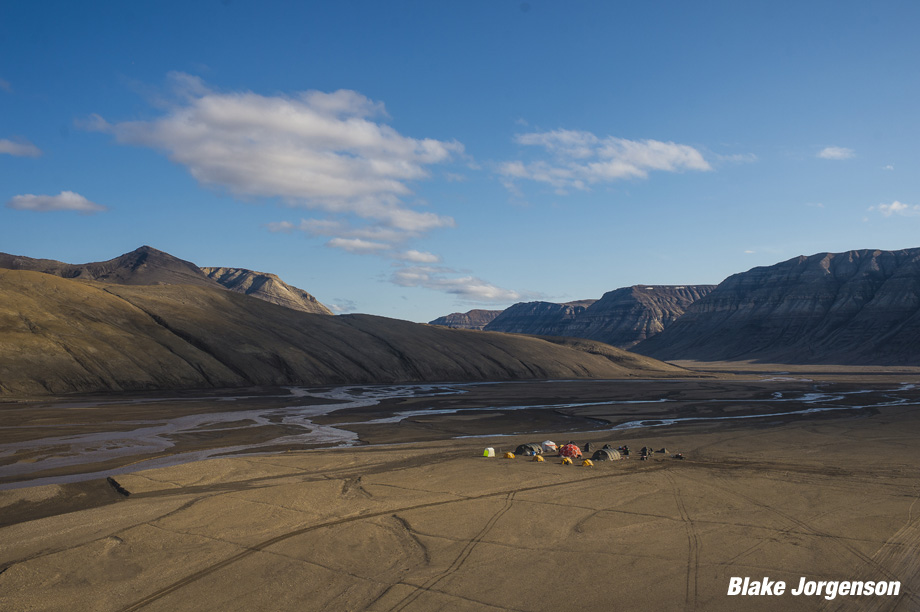 The team gets to work and two areas with big lines are identified: the Drag Strip, altitude 2500 feet, and the Dream Chute, at 2700 feet. A number of shorter rides are undertaken as the team builds up to the big ones and one cannot help but be impressed by the amazing bike handling skills of the freeriders although not everything works out quite right. They certainly look like they are having fun but the landscape simply overwhelms everything. 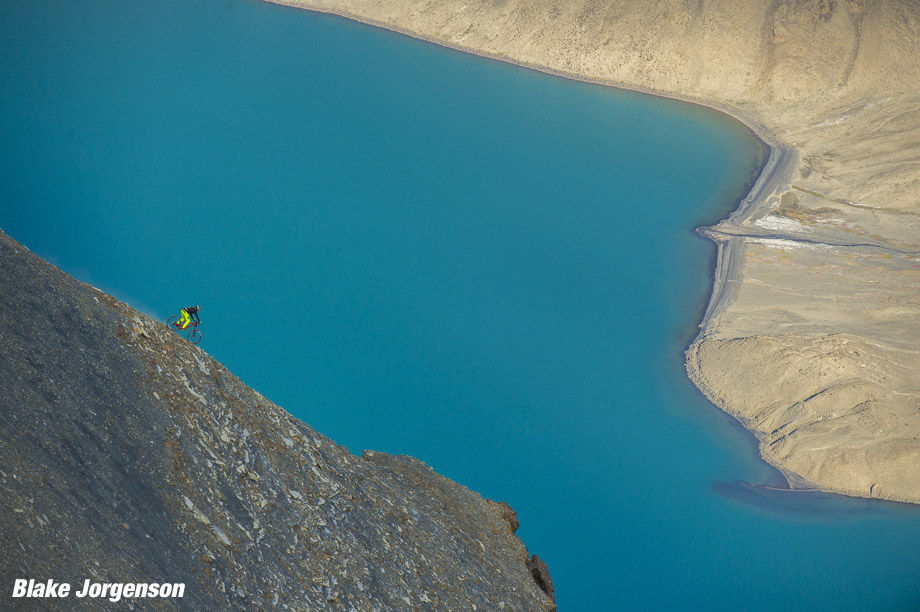 In addition to the riding, there are other great moments in the film. The doctor discusses the medical situation, pointing out that the nearest hospital is a 12 hour flight away in the best circumstances, shows his enormous bag of first-aid stuff, and then asks the freeriders about their injury experiences. For someone who thinks road rash is a big deal, this is an eye-opener as the cyclists all have been banged up pretty badly, from broken feet, ankles and collarbones to dislocated shoulders and a broken back. So it is indeed useful, as we see, that the doctor has been brought along. 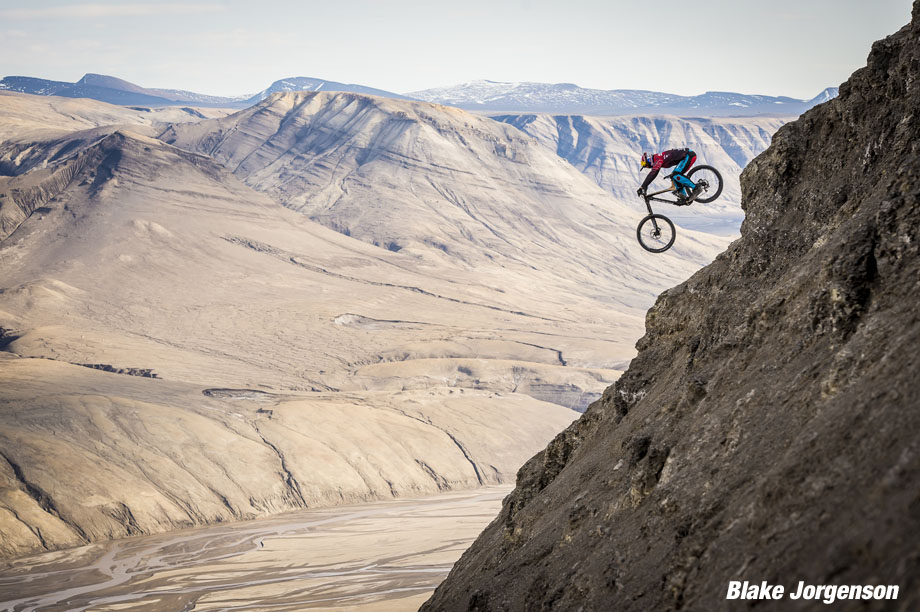 It is not all fun downhilling and medical problems. “North of Nightfall” also includes segments on natural history and the effects of climate change on glaciers, such as the ones no Axel Heiberg Island. The team visits the little research station and the scientist points out that the Arctic has gone from being the most inhospitable region on Earth to one of the most vulnerable. 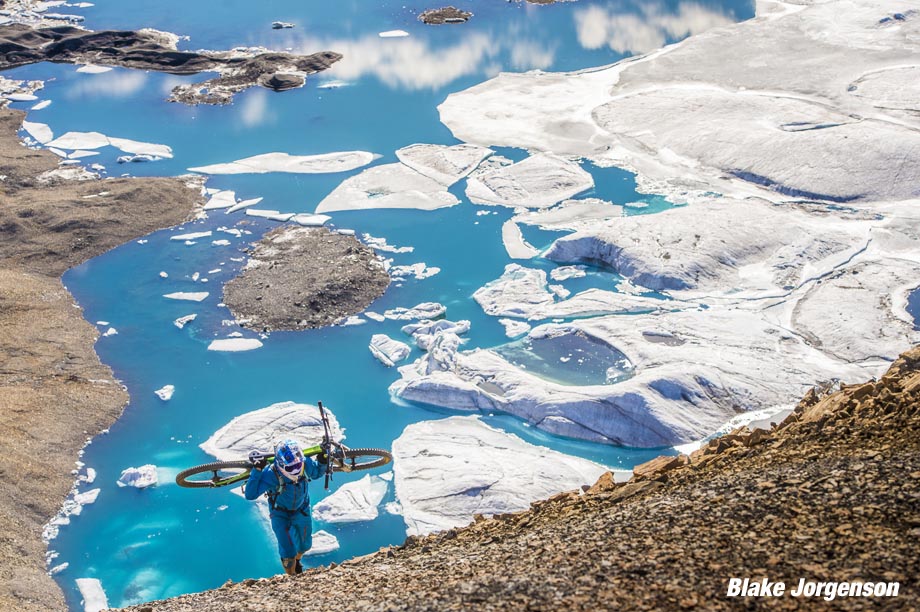 The four riders are a sympathetic bunch, with supportive families, and the film nicely highlights the mentoring by the older pair of the younger. These are clearly among the best in the world at this sport are enthralled to be in this remarkable location, where the sun doesn’t set but just goes around in circles. It is like another planet. Do not pass up the opportunity to see this on a big screen and be prepared to feel very, very small as the sport of cycling takes you to a place almost nobody has ever set down two wheels before. Unique. 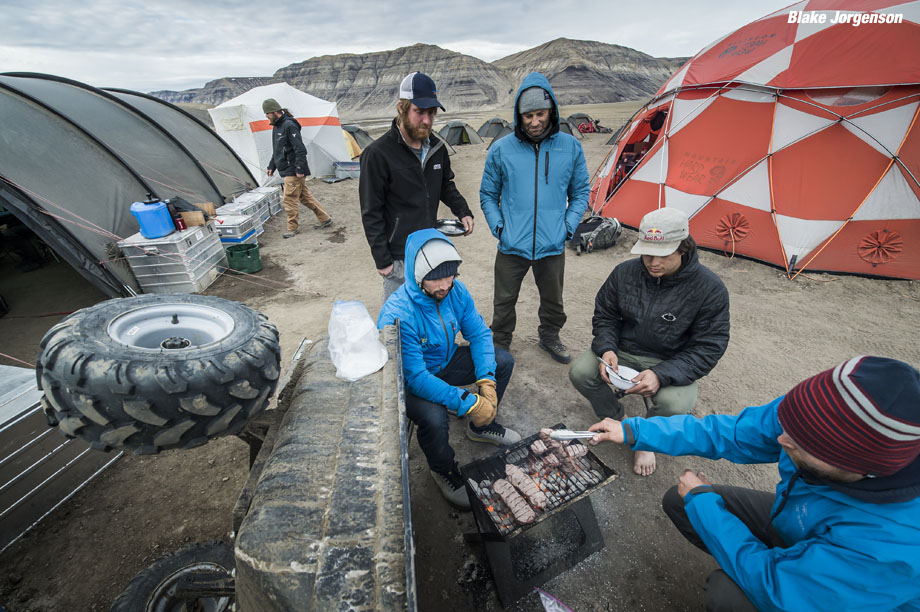 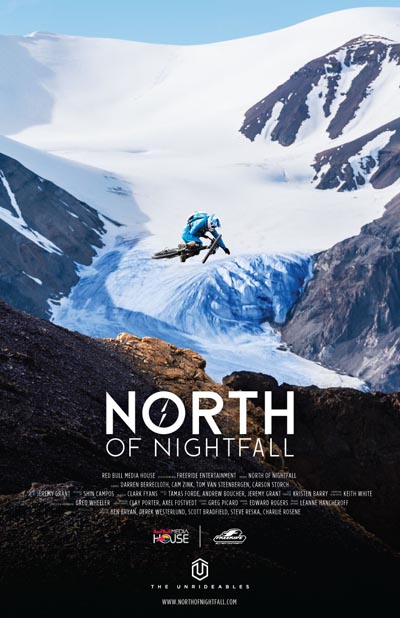 “North of Nightfall” will be showing at selected cinemas, based on threshold demand, across Canada on Friday, June 1. It is necessary to book seats in advance and you can do that at: https://ca.demand.film/north-of-nightfall/ today! 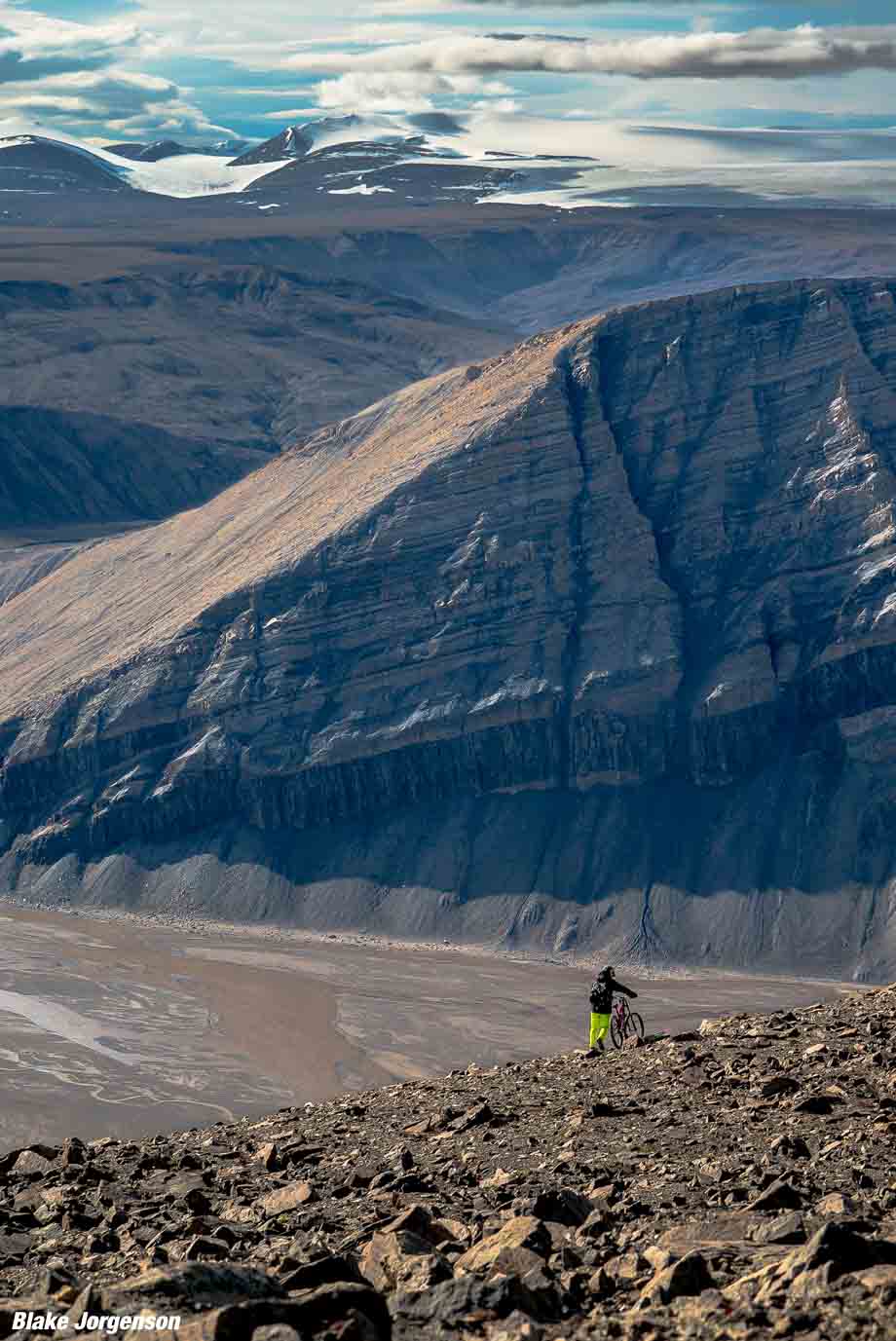 When not riding in the opposite direction of polar bears, Leslie Reissner may be found in a place with actual trees at www.tindonkey.com.