PEZ Goes To The Movies: All For One

Film Review: On May 23, 2018, selected cinemas in Canada will be showing another Demand Films presentation with Australian overtones. Yes, they come from a Land Down Under: Orica-GreenEDGE arrived on the pro cycling scene in 2012 determined to make a splash and wave the flag. And, strewth!, so they have. 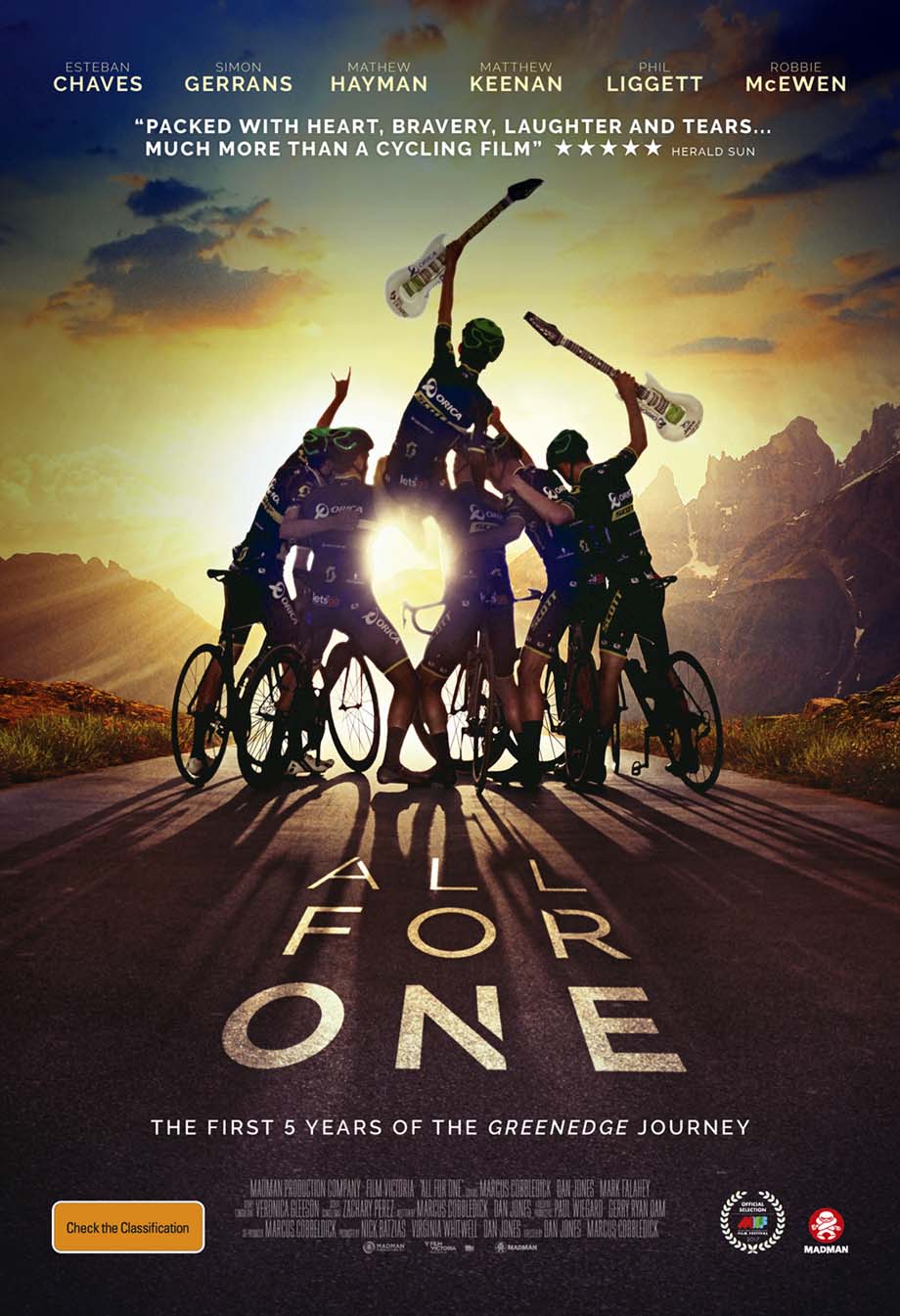 Australian businessman Gerry Ryan attended the 2010 Tour de France and stood in Paris on the final stage of cycling’s biggest event. He saw flags from all the participating nations but was disappointed not to see an Australian flag. Keen to rectify this situation, he immediately set about launching plans for an Australian pro team and, amazingly, Orica-GreenEDGE was formed in January 2011, and in place and ready to compete in the 2012 season at the highest level, the UCI World Tour.

Managed by Shayne Bannan since its inception, the team was built up by a combination of young and promising Australians and seasoned professionals able to offer guidance and tactical smarts. From the start, this was not meant to be a gang of Ozzie rednecks (“bogan” is the native term) but a first-class operation. Much of the film, which covers the years 2012 to 2016) is focussed on the Directeur Sportifs, namely Matt White and the impressively foul-mouthed Neil Stephens, and three particular riders: Simon Gerrans (now with BMC as of 2018); Matthew Hayman; and Esteban Chaves. Other riders, including the irrepressible Robbie McEwen and Canada’s Svein Tuft, get a look-in as well. 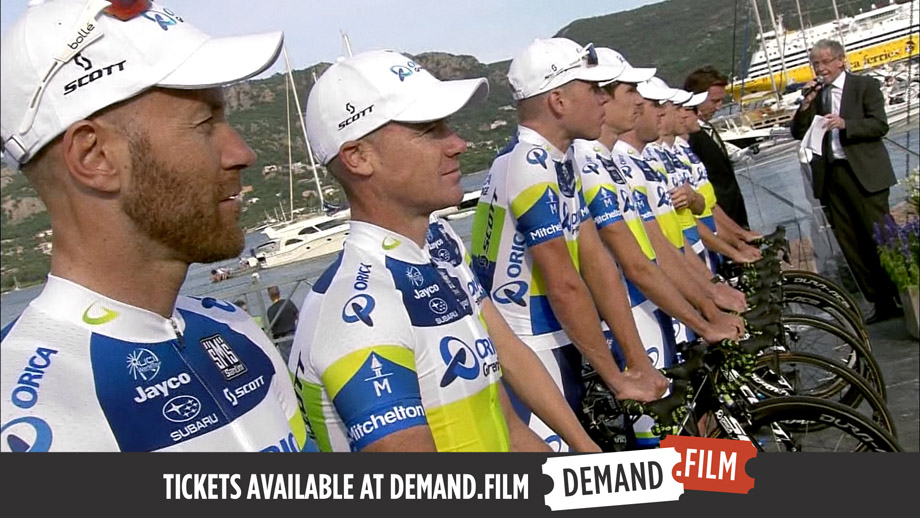 As with all new ventures, there were some teething problems related to getting the team functioning but clearly these were overcome pretty quickly as Orica-GreenEdge made a huge impact in 2012 in the early season when Simon Gerrans landed a Monument: Milan-San Remo. He would subsequently get another in 2014 at Liège-Bastogne- Liège, and also took individual stages in all three Grand Tours. 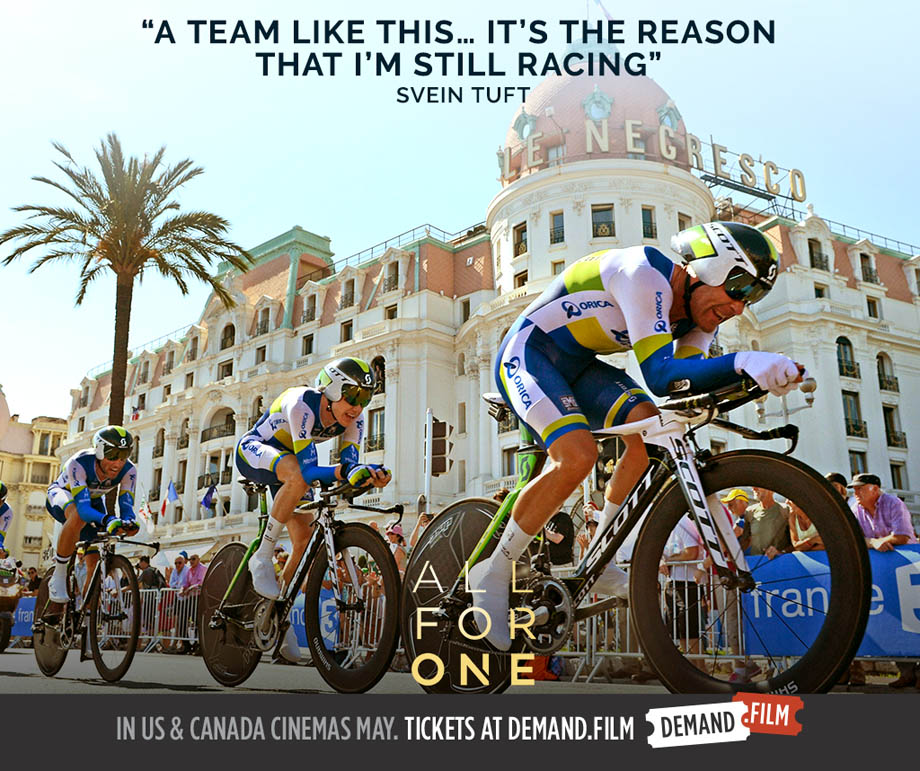 A highlight of the film is the 2013 Tour de France, where, one day after the incredibly embarrassing incident where the team bus got stuck under the finish line as the race approached, Orica-GreenEDGE went on to win the team time trial, putting Gerrans in the Yellow Jersey. In one of the most remarkable gestures of sportsmanship in pro cycling, Gerrans arranged for his teammate and helper South African Daryl Impey to wear the Yellow Jersey at the end of the next stage, making Impey not only the first of his countrymen to wear it but also the first from the continent. While one of the strengths of Orica-GreenEDGE was its strong team bonding but this act of Gerrans’ was certainly noble. 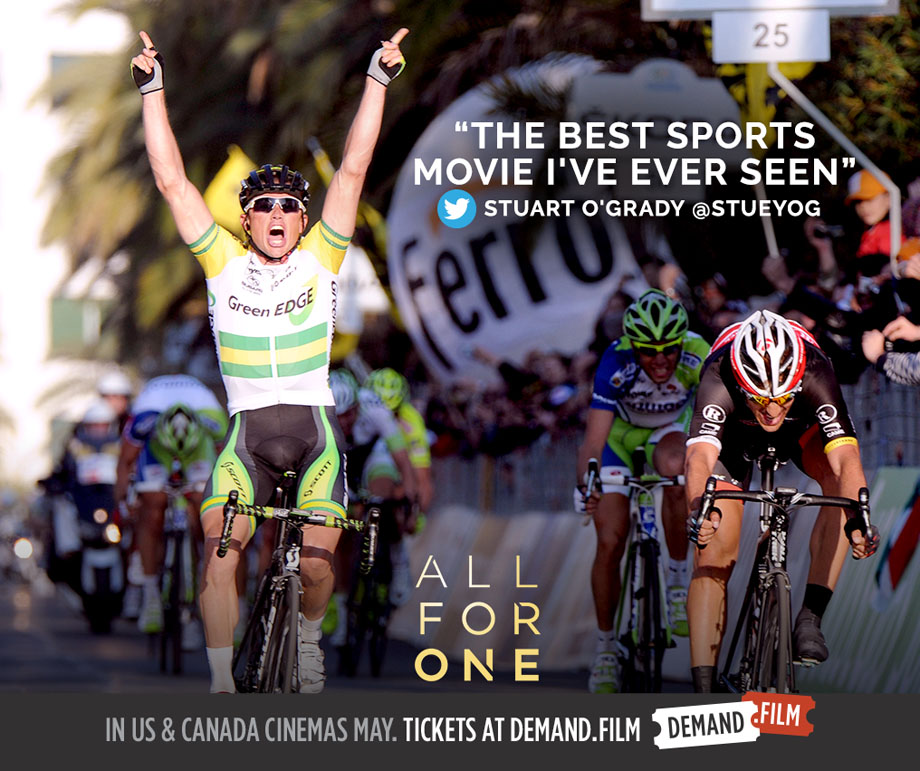 The team was clearly a fun place to work and the result was a wildly popular YouTube video series called “Backstage Pass” that ran from 2012 to 2017 and gave fans a chance to see the team doing all kinds of non-racing things—cooking lessons included! As shown in “One for All,” the enthusiasm of the fans for “Backstage Pass” and the team was remarkable and the kind of modern marketing that pro cycling can use. 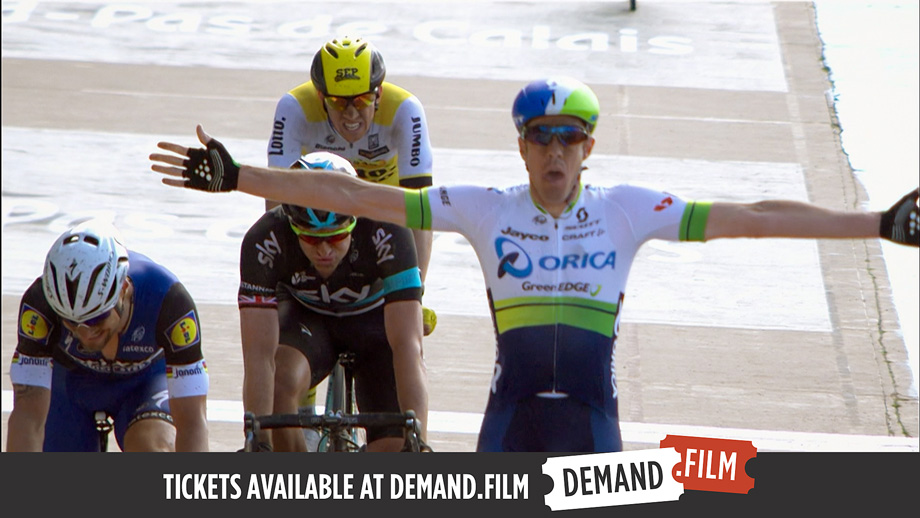 The story of Matthew Hayman, who is still riding with the team at 40, is another highlight. A dedicated domestique, Paris-Roubaix was the one race he dreamed of winning and for which the team would support him as leader. In 2015 he was going well until his front wheel broke; a few weeks before the 2016 race he broke his arm and it looked like his Spring season was over. Instead, he got on the home trainer (with a cast on!) and did serious efforts there. The result was a well-earned victory in 2016 as he outsprinted four-time winner Tom Boonen. 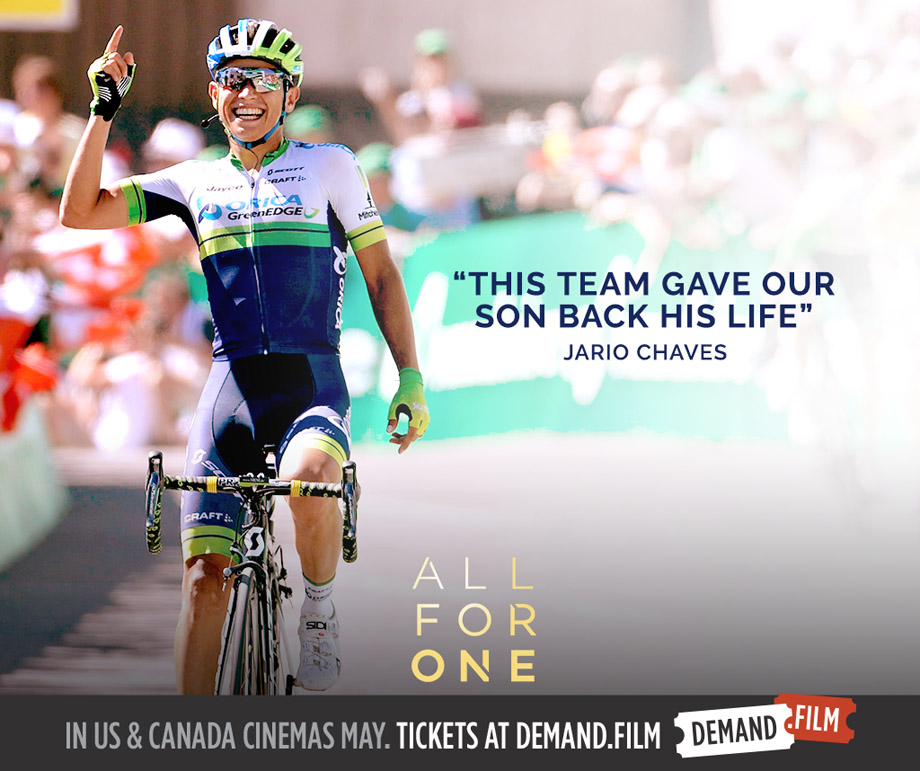 But at the end of the day as good as some of the Australians may be, team managers who want to win need to look for the best rider, wherever he might be from. Thus Orica-GreenEDGE brought on Colombian Esteban Chaves as a new pro in 2014 as Neil Stephen saw enormous potential. Unfortunately, that potential was delayed due to horrific injuries Chaves sustained in 2013 while still a neo-pro. A good part of “One for All” is about the disarming Chaves (who looks like he is 14 and was racing in Europe with braces on his teeth!), his recovery and the willingness of Orica-GreenEDGE to support his return to top-level racing. His 2015 season was a good one; in 2016 he won his first Monument, the Giro di Lombardia, came second in the Giro d’Italia and third in the Vuelta. The video highlights a Vuelta stage win in 2015, where Hayman had told him to attack and Chaves just blasted off uphill. Amazing. 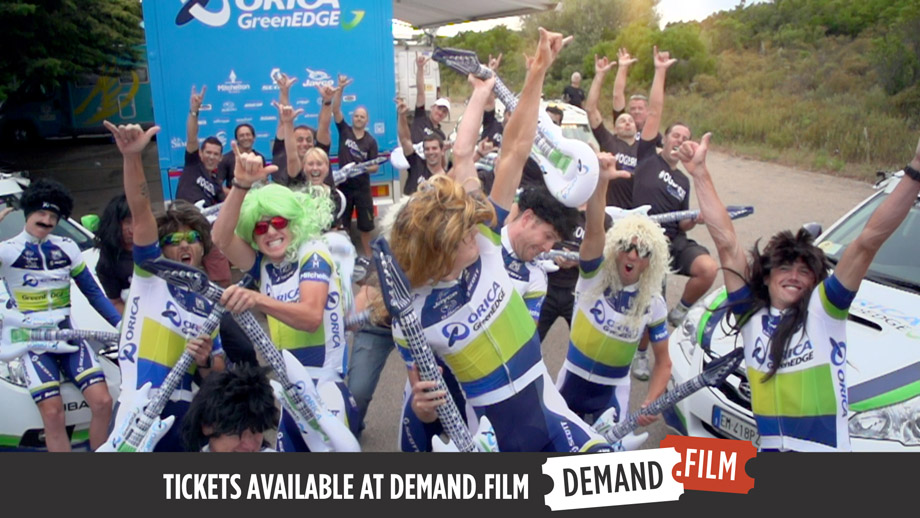 It is always interesting to see the inner workings of a pro cycling team although the filmmakers have avoided some of the more difficult issues. Neil Stephens was on the notorious 1998 Festina team and admitted using EPO, although claiming he thought it was vitamins. Matt White was suspended from Orica-GreenEDGE from October 2012 to June 2013 and was sacked as national coach of Australia Cycling for his admitted use of performance-enhancing drugs during his pro career with US Postal. Sloppy team management saw young star Simon Yates fail a drug test in 2016 which would have been avoided with the proper paperwork. And there remains the question of Gerry Ryan’s continued support: in pro cycling a number of teams have been the hobbies of wealthy individuals (Tinkoff, Leopard, Phonak/BMC all come to mind) who lost interest. Orica-GreenEDGE’s first primary sponsor was a chemical company and when it left a new main sponsor was sought in 2017. In 2016 the team became Orica-Bike Exchange, with Bike Exchange being a company owned by Gerry Ryan, then Orica-Scott in 2017. Today it has become Mitchelton-Scott (Mitchelton being a winery owned by Gerry Ryan). Ryan appears to be committed and is the sponsor of other sports in Australia as well. 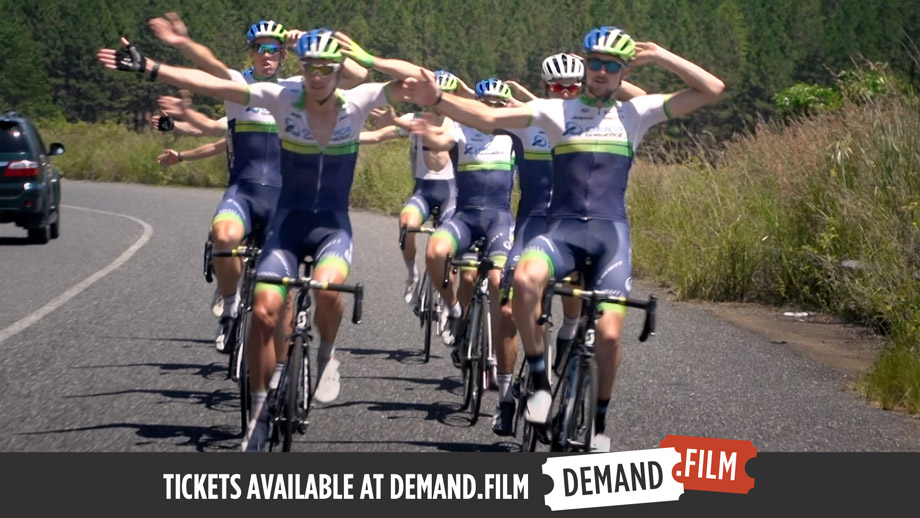 ‘One for All’ is a worthwhile film about the new guys moving into a very traditional sport and competing seriously; on the big screen at the cinema this will look even more dramatic. Enter the mate zone: you’ll enjoy it—fair dinkum! 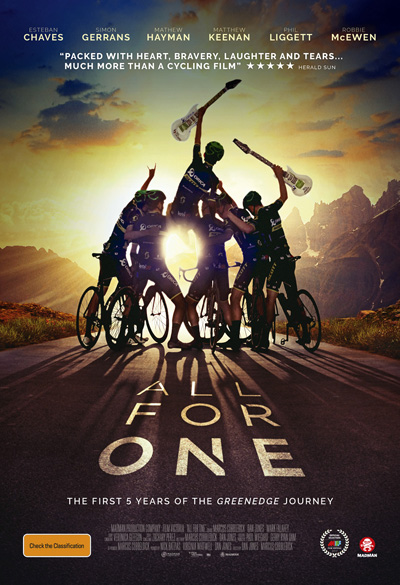 All screenings are May 23 throughout Canada. Tickets must be reserved online at https://ca.demand.film/all-for-one/

IMPORTANTLY, if a screening does not reach its threshold (minimum) two weeks prior to screening date, that location’s screening may cancel.

In the US, the ticket portal is at https://us.demand.film/all-for-one/ and there are various screening dates at various locations in the US through the end of May.

For US dates for “All for One” look here: https://us.demand.film/all-for-one/

For more information go to: https://www.madmanfilms.com.au/all-for-one/ 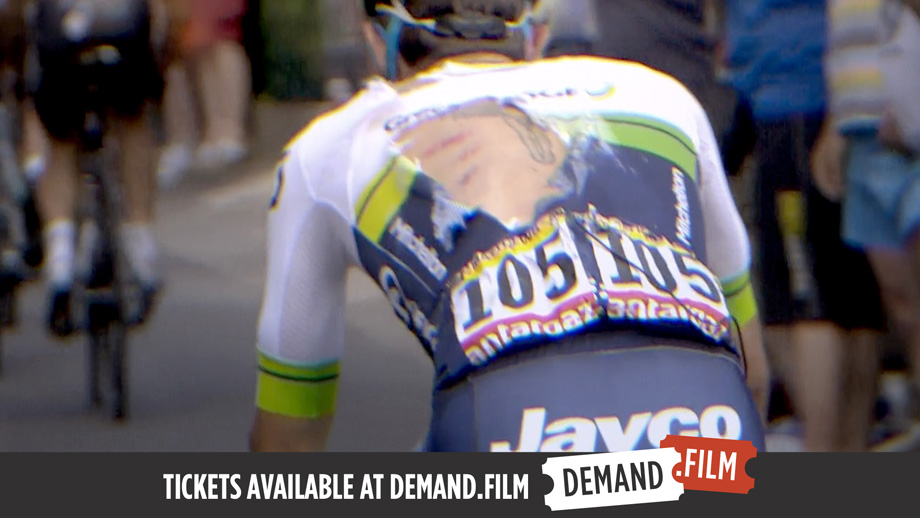 When not mistaken for a total larrikin, Leslie Reissner may be found putting a prawn on the barbie at www.tindonkey.com.