1974 Giro d’Italia: Fans of the Giro d’Italia love it for its unpredictability, its difficulty, its confusion. Last week we looked at the Jørgen Leth documentary about the 1973 race, “Stars and Watercarriers,” and in 1974 many of those same stars returned for a rematch. The results are shown in another documentary, “The Greatest Show on Earth”, produced as a television movie by German filmmakers, with a very different viewpoint. 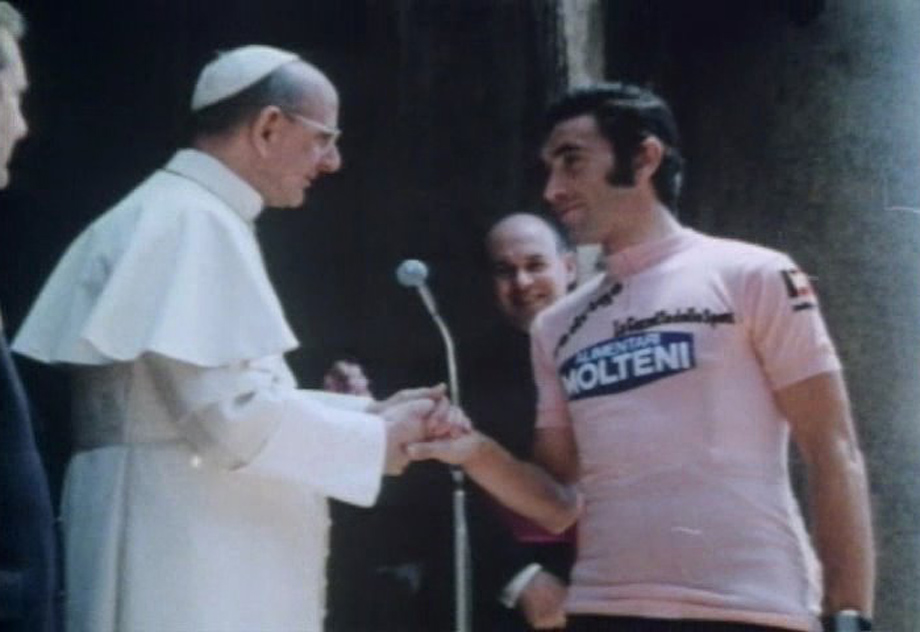 As the old joke used to go: “Who’s the guy with Eddy?”

First of all, let’s be clear that “The Greatest Show on Earth” is not to be confused with the 1952 Cecil B. DeMille film of the same name about the Ringling Brothers, Barnum & Bailey Circus, although no Giro lacks a circus atmosphere. The original German title was “Die härteste Show der Welt”, which might be translated as “The Hardest” or “The Toughest Show in the World”, but it is often retitled as “Eddy Merckx: The Greatest Show on Earth” so be aware of this when looking for the film. 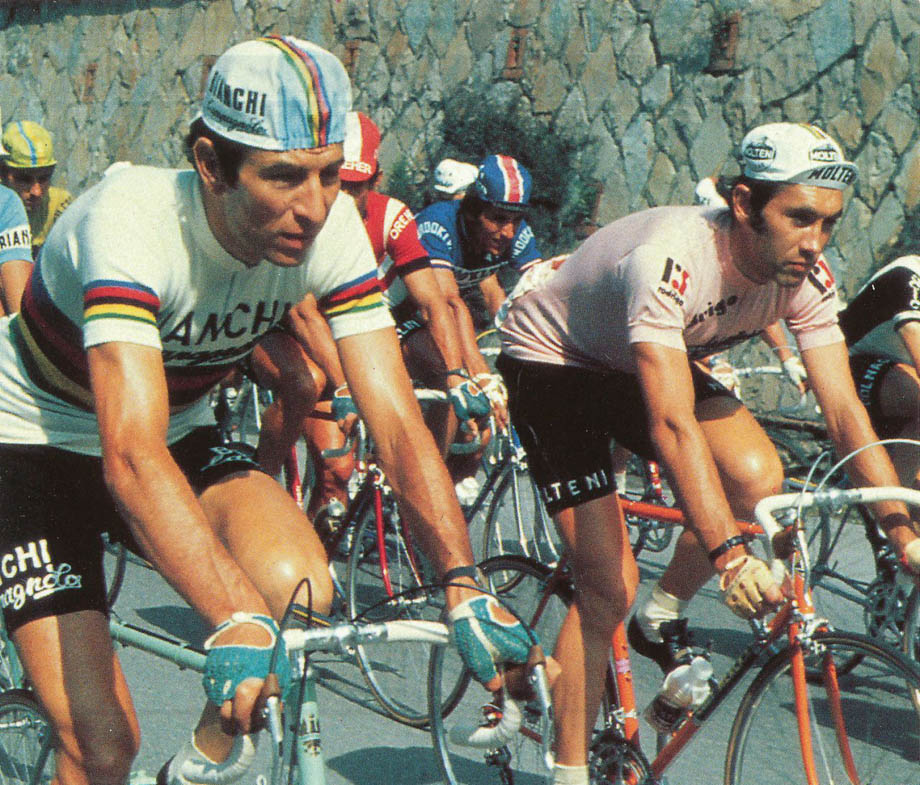 The director of the film was Michael Pfleghar (1933-1991), a prolific worker who directed, wrote and acted in a vast number of German television productions. He directed 17 films between 1958 and 1987. One of these, “Die Tote von Beverly Hills”, was nominated for a Palme d’Or at the 1964 Cannes Film Festival but he does not seem to have been noted for exceptional quality but rather workaday reliability. An early enthusiast for high-definition television, he suffered the fate of pioneers in getting in too early and was bankrupted by HDTV investments, coming to a sad end in Dusseldorf. Co-credit is given to producer and writer Hans Gottschalk (1926-2010), who was the father of one of Germany’s biggest television stars today. 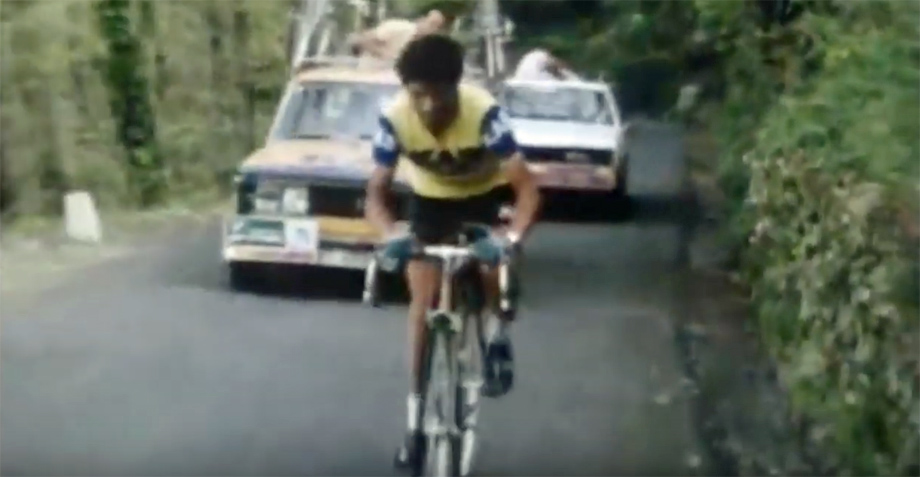 Jose-Manuel Fuente on the attack

Pfleghar’s Giro movie reflects his commercial focus rather than Leth’s arthouse background. His movie unrolls in a logical manner, from the start of the race to the final lap, but as in Leth’s case as well he zeroes in the stars for his narrative: Eddy Merckx, Felice Gimondi, Jose-Manuel Fuente, Roger De Vlaeminck. 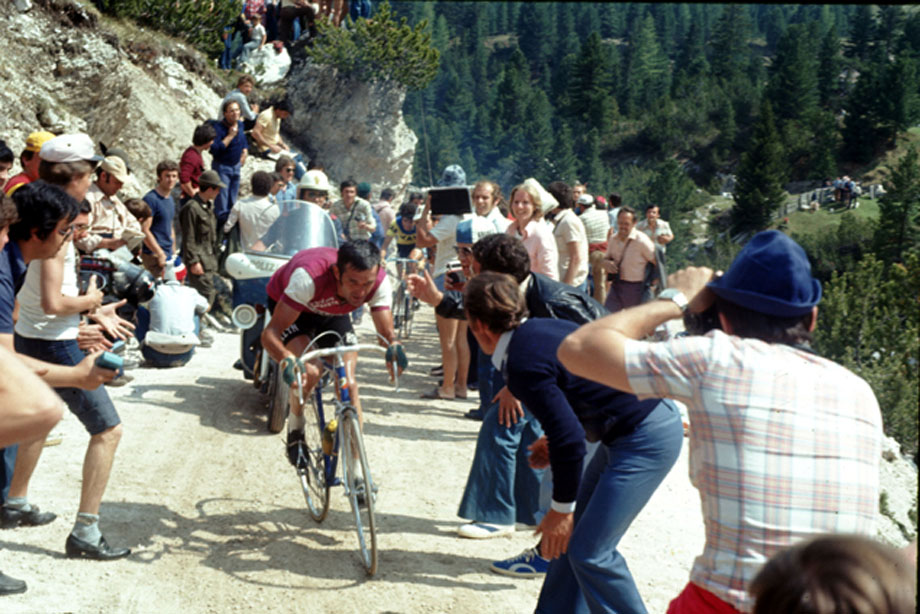 Merckx, the winner in 1968, 1970, 1972 and 1973 (!) had started out the season poorly and was recovering from respiratory ailments. Fuente was in excellent form, having won the Vuelta only a short time before, Gimondi was the reigning World Champion and three younger riders — De Vlaeminck, Moser and Battaglin—were expected to put in a battle. The film opens as the race does, in Vatican City, where the riders are blessed by Pope Paul VI before heading out. Pfleghar’s film features aerial camerawork and animated maps of Italy to show the route, unlike Leth’s more primitive (well, cheaper) approach. 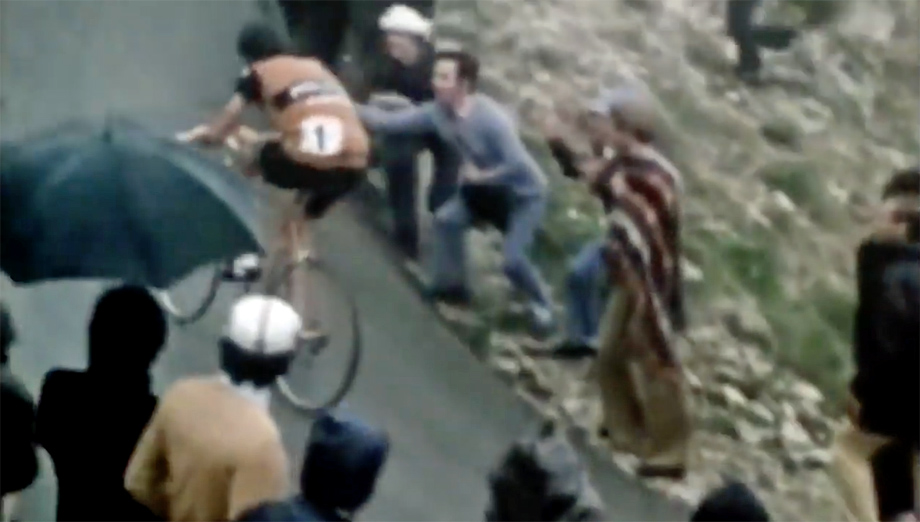 In addition to seeing the racers at work, we are given the opportunity to see Vincenzo Torriani do his thing in a surprisingly long segment. The film final credits note the movie was done in cooperation with Torriani, who was clearly not a shrinking violet. Torriani (1918-1996) was the Director of the Giro for 48 years and where the Tour de France was moving towards the slick commercial organization we know today, the Giro continued as a huge, semi-confused bike race. Torriani was an innovator, introducing such things as the team time trial, the mountain time trial, and time bonuses for stages, all later taken up by the Tour, and he put together courses that would mean unpredictabile racing. The segment of the film featuring him uses Verdi opera music as he is shown rushing about his various tasks, including personal hands-on crowd control. He speaks of the organizational needs of the Giro, which involved significant forces even then, but says you cannot learn to run a race like this but must be born to do it.

The narrative speaks of the efforts of the water carriers (“water boys”) and how hard they work, as the races rolls on through the heat of summer in Italy. The bottles are passed around and one cannot help be impressed by the efforts of one pro at the 22 minute mark who opens a glass bottle with his stem while riding, something you may not want to try. 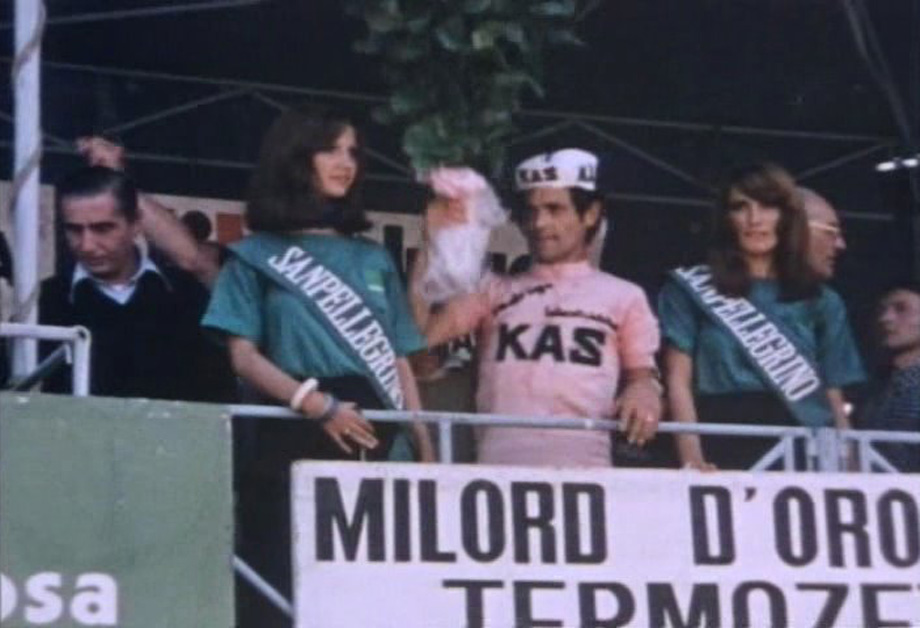 Fuenta took the pink jersey, but it didn’t last

There are many fine moments in the film, particulary when covering Fuente, who was in the Pink Jersey of the leader after winning Stage 3. In Stage 9 he outpaces Mercxk on the climb to Carpegna. It is a fine victory but the film’s visuals suffer from the dreadful soundtrack, as a tuneless humming is inserted to an orchestral background. What were they thinking of here? Well, it is consistent as the soundtrack is fantastically cheesy, using opera music, bongo drums, a disco-ish version of Gershwin’s “Summertime”, a bit of the Moody Blues’ “The Question” and Italian pop music—and this terrible humming. Leth’s music in “Stars and Watercarriers” is often too sad but never maddening. 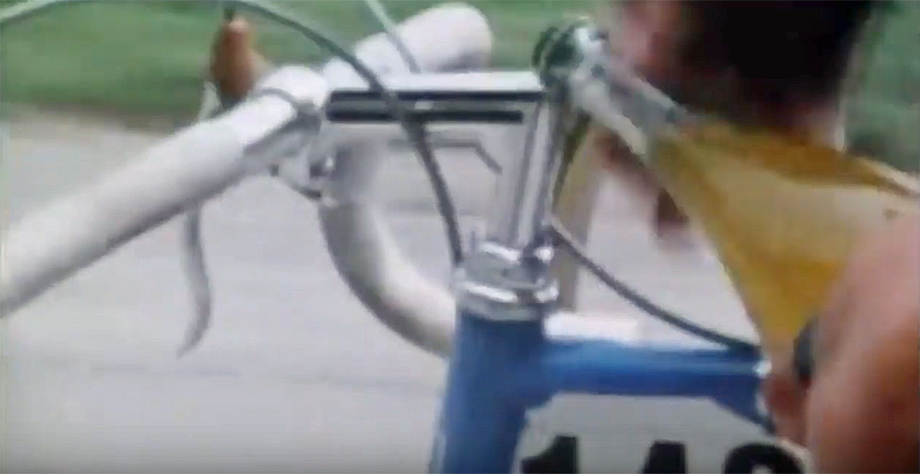 The ‘opening a bottle on the stem’ scene

The Stage 12 time trial is won by Merckx but Fuente manages to keep his lead by eighteen seconds in spite of being weak in the race against the clock. But Stage 14 is a disaster for the little Spaniard, who suffers from the hunger knock and ends up losing nearly eight minutes to Merckx on the stage. He had been confident of doing well on the stage but his failure to eat meant losing strength and losing the jersey. 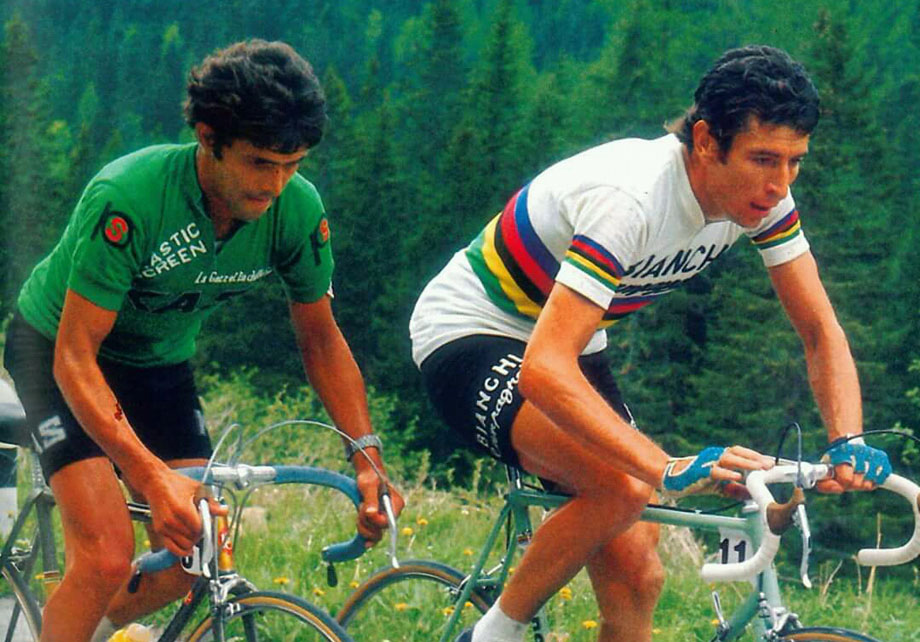 Stage 16 was Fuente’s last opportunity for redemption as he rode out into the lead on a 158 km stage that inluded the brutal Tre Cima di Laveredo climb. This may be the best part of the film, a dramatic interlude, and some pretty amazing crowd sequences as the tifosi lend helping hands. The narration includes first person thoughts from riders and Fuente spoke about cramping and the pain of riding a race when suffering so much. The riders are filmed at the conclusion of the stage, walking to their recovery activities and looking like Death warmed over. 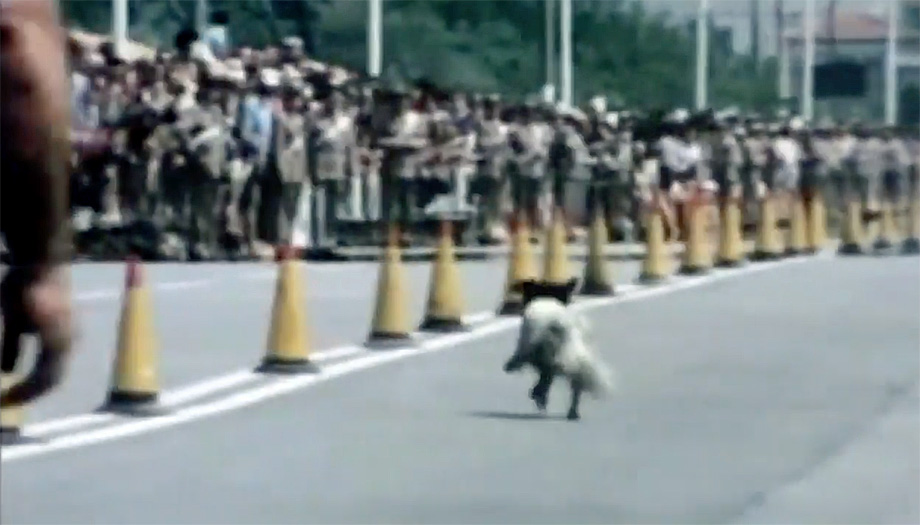 Escaped dog on the course

In the end it was not enough as 1974 was The Year of Merckx, who won the Tour and the World Championship in addition to the Giro, although he barely won that one. A segment of the film at the conclusion of the race shows a pensive Fuente as the director inserts footage of his receiving the Pink Jersey after his superb win during Stage 9, a flashback that shouts more “Fuente—you are such a loser!” rather than the sympathy it is perhaps intended to evoke. Fuente is indeed a sympathetic character, seemingly battered ever year at the Giro by the unstoppable Merckx, and he retired from racing aged 30 due to the kidney illness that ended his life 20 years later. 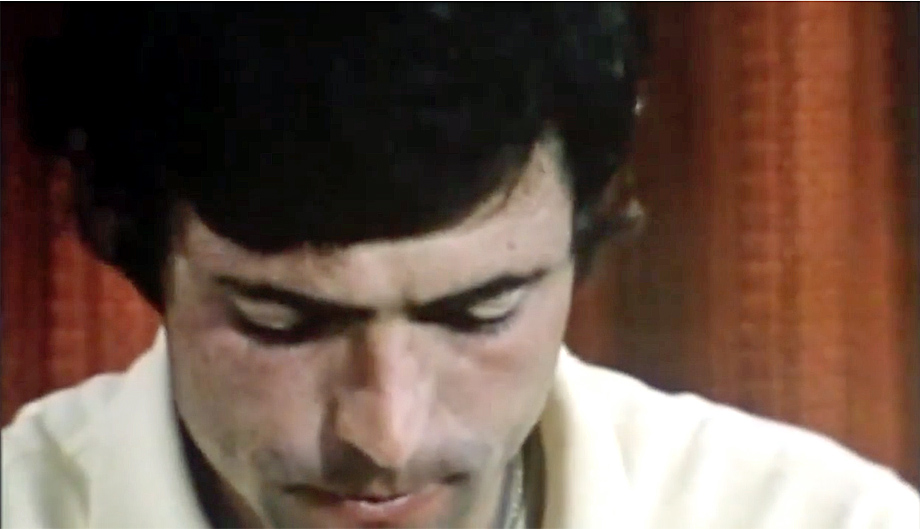 Fuente comes over as sad, but he did win two Vueltas, one in 1974, only the month before the Giro as the Spanish race was in April in those days

“The Greatest Show on Earth,” like the Leth movie of the year previous, offers much about bike racing that would be informative to the uninitiatited but is much more workmanlike in its approach. Any Grand Tour has so much going on it is hard to limit the storytelling but Pfleghar is correct in his focus on the Fuente vs. Merckx element. This makes it a good documentary, a record of the race, rather than something that reaches for the stylishness and poetry of “Stars and Watercarrriers” where the race sometimes becomes secondary to the personalities. 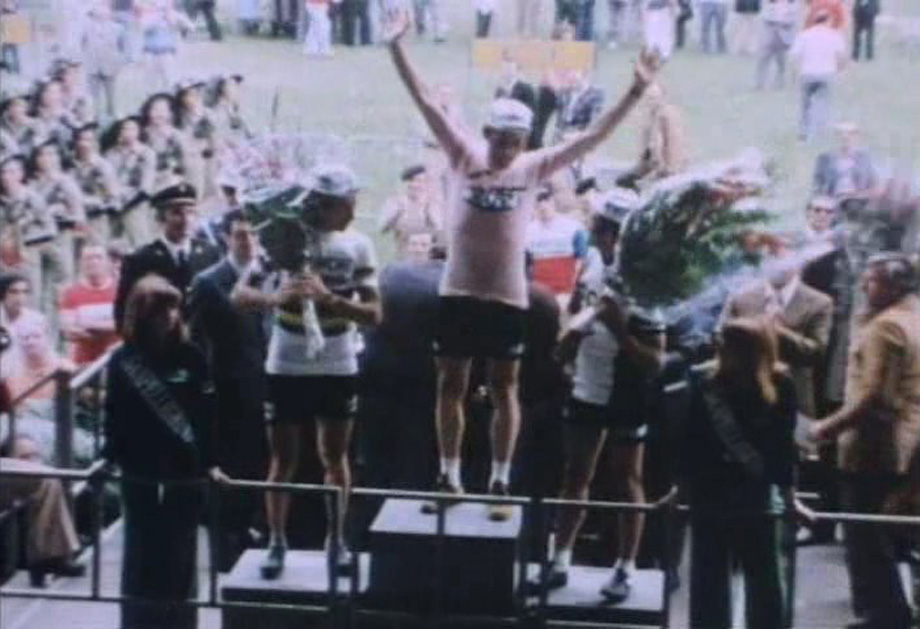 Merckx on the final podium

Today’s Giro d’Italia is better organized and more professional on every level but is just as unpredictable as that race in 1974. Viva il Giro! 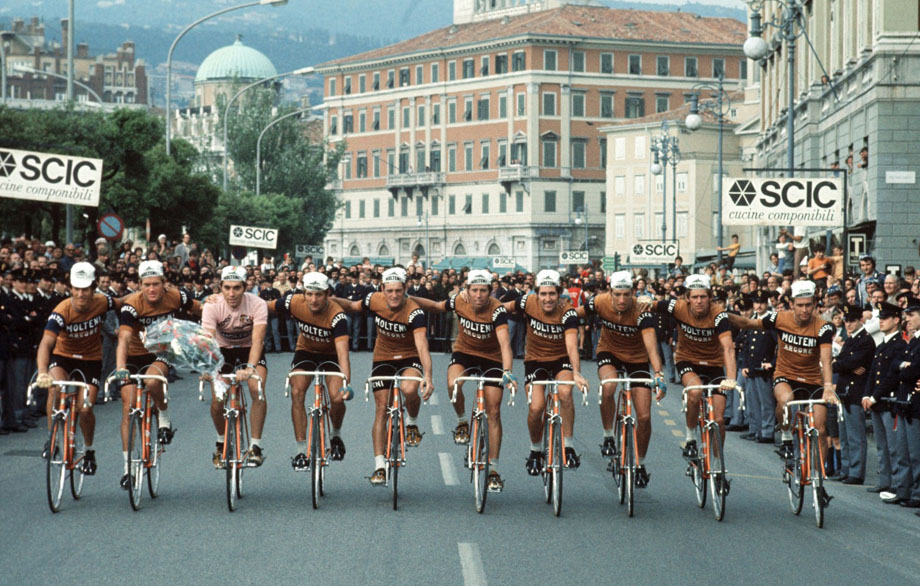 “The Greatest Show on Earth”, directed by Michael Pfleghar (Germany)
released in 1975, 75 minutes
All photos taken from the film.

The full film: ‘The Greatest Show on Earth’

When not hoping that some tifosi will push him uphill, Leslie Reissner may be found ordering more champagne for his domestiques (“Più champagne per i miei gregarios!”) at www.tindonkey.com.