PEZ Goes to the Movies: The Least Expected Day

It is not surprising that during the Great Lockdown Netflix is seeing a massive increase in subscribers. While perhaps many new viewers are motivated to watch the bizarre antics and freakish characters in “Tiger King,” around the same time a six-part documentary about pro cycling team Movistar’s 2019 season also came out. No freakish characters there but bizarre antics could not be ruled out as those of us watching races last year did not comprehend what the team was trying to do.

Well, obviously, they were trying to win Big Races. Movistar is the oldest team in the top ranks of the pro peloton. It was founded in 1980 when sponsored by Reynolds and has, under its various different names, won no fewer than thirteen Grand Tours. In 2019 it boasted an impressive roster that included reigning Road World Champion Alejandro Valverde, Giro and Vuelta winner Nairo Quintana, Giro and Vuelta stage winner Mikel Landa, Paris-Nice winner and up-and-comer Marc Soler, and Giro stage winner Richard Carapaz. Under the capable management of Eusebio Unzué since 2008, the team is considered a threat in both stage races and one-day Classics yet anyone following the 2019 season had to be puzzled as to the team’s strategy as it ended up collecting “Best Team” awards in all three Grand Tours but seemed to suffer from a lack of focus and internal bickering that prevented achieving the kind of success that Ineos or Deceuninck – Quick-step can boast.

“The Least Expected Day” is actually that day in a bike race where something happens, something that could lead you to the top of the podium. As the title of this six-part documentary (all of the episodes are rather short, with none more than 40 minutes long), it is quite appropriate as it is an honest portrayal of life inside a pro team and it is clear that even the best plans can easily fall apart in the heat of competition.

Carapaz, Landa, Valverde, Quintana and Soler are naturally the central characters in the drama but as well we see the team’s directors in action and they are an interesting bunch, from the avuncular Unzué to José Luis Arrieta, with whom you would not want to share the team car when things are going badly. And things seem to go badly more than they should. 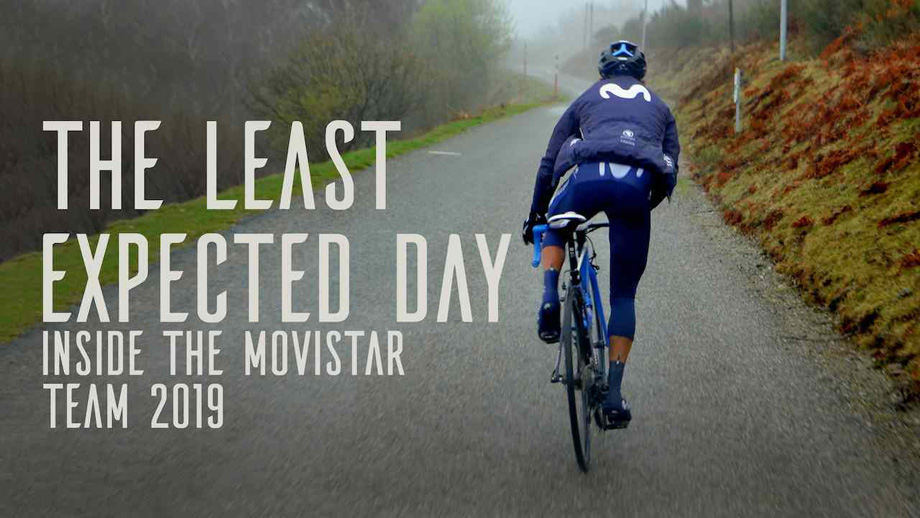 The documentary switches, at times confusingly, between quieter elements shot in the riders’ hometowns, team meetings and the cut-and-thrust of racing. The Elder Statesman of the team is Alejandro Valverde, a veteran with a remarkable palmarès. In 2018 he succeeded, aged 38, in taking the Rainbow Jersey at the UCI World Championships in Innsbruck, his 12th appearance at the World. One of the strengths of the documentary is giving those fans in the English-speaking world the opportunity to know more about riders who, at Movistar, work in Spanish and are seldom interviewed by English media. Valverde comes across as an intelligent and often charming character and it is something of a shock when we learn that the Rainbow Jersey, something that he fought for so many years, bears such a great weight on him.

Mikel Landa, who was a brilliant domestique in support of Chris Froome when riding for Sky, is the chosen leader for the Giro but things fall apart on the first day on the very tricky short time trial. We see the cracks inside the team order as Richard Carapaz, the first Ecuadorian to win a stage in a Grand Tour, moves up the classification. We learn of Carapaz’s childhood and close family and one has the feeling that such riders (and Colombians Egan Bernal at Ineos and Esteban Chaves at Michelton-Scott) come from a very different world than the European riders with a different kind of hunger to succeed. 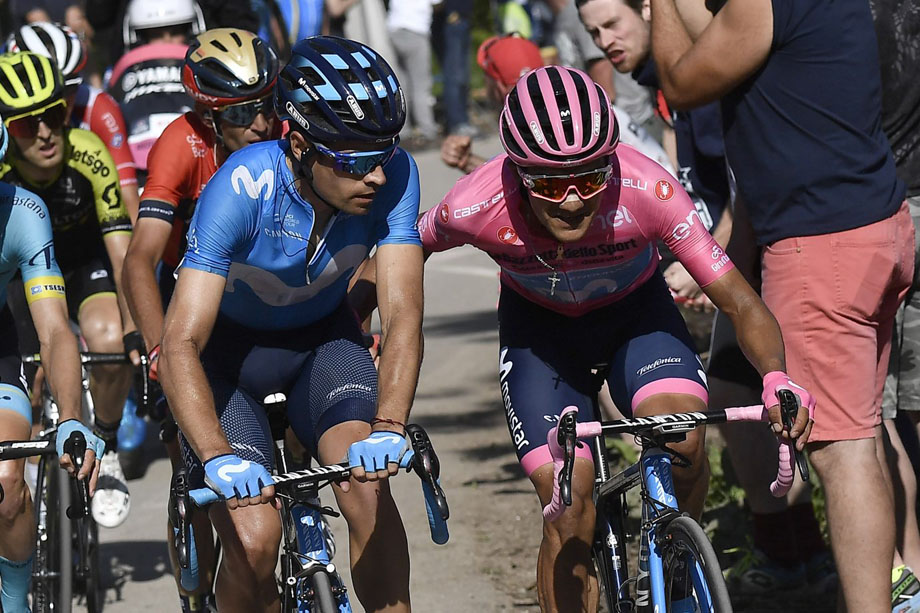 Landa and Carapaz in the Giro d’Italia

At the Tour de France Nairo Quintana was the designated leader—apparently. It is wonderful to actually see Quintana speak — he even gets emotional at one point — after years of seeing his expressionless race face during the Grand Tours. Although racing fans like to critique riders—why didn’t he chase him down? etc — there are days when a rider just does not have it in them. They are not machines and Quintana, although only 29, seems to be fading, with only flashes of the past brilliance that won him Grand Tours. It is clear he is disappointed with what he perceives as the lack of support from the team but it is also a challenge for Movistar to deal with his weak moments and save the situation. 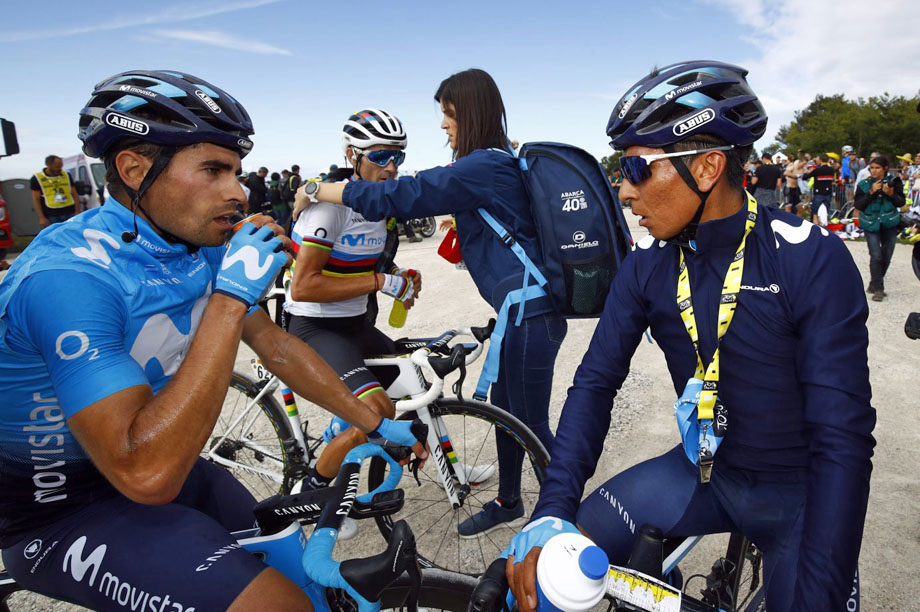 Mikel Landa is also 29 but seems dogged by bad luck and a lack of confidence. A superb climber, he is clearly troubled by his disputed leadership role in the team, a Basque trying to deal with Spaniards.

And then we have Marc Soler, the Young Gun and the hoped-for future of the team. With Carapaz injured and unable to lead at the Vuelta, Soler is drafted in and has a terrible start to the race. Quintana is still a presence and Soler’s attempt at winning a stage rather than waiting for the Colombian makes for the highest drama in the series and leaving open the question of what the correct strategy should have been. There was plenty of criticism circulating around in the team, not just outside of it. 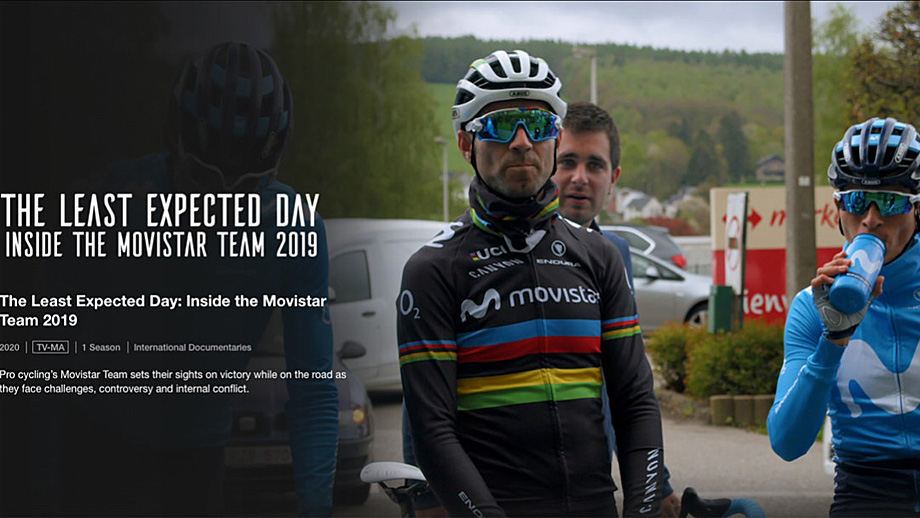 At the end of the season, Movistar had three Top 10 placings in each of the Grand Tours but only a single leader’s jersey at the end, and major changes in personnel for 2020. “The Least Expected Day” is an interesting and forthright look at a top team and the pressures faced by athletes and managers. It should be noted that some of the Spanish is sterilized in the English subtitles! 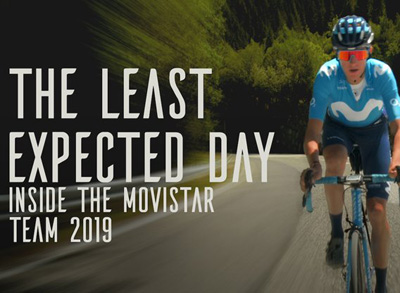 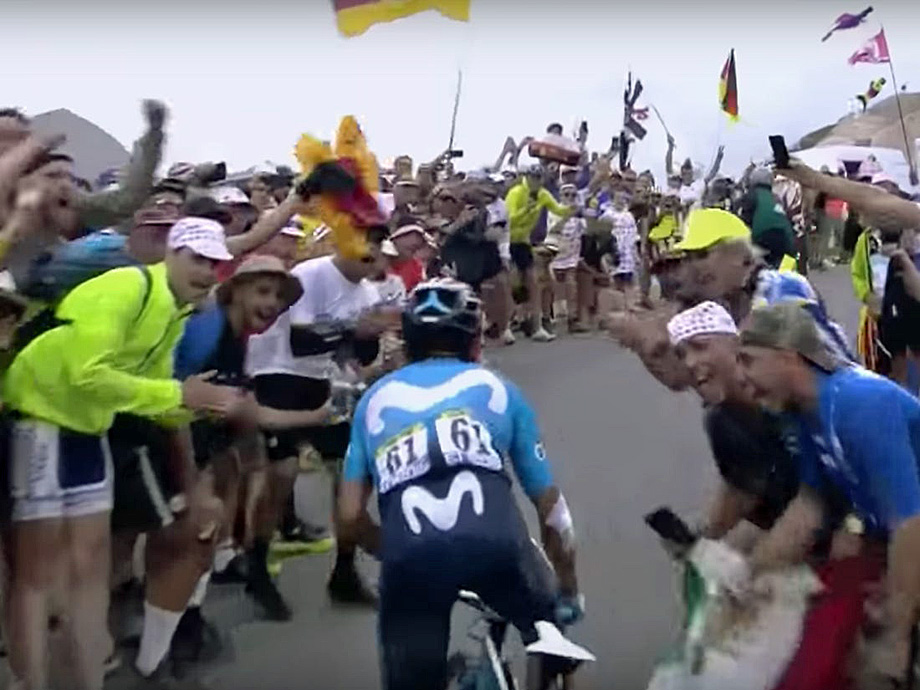