When I first started riding I remember people telling me “if you want to get fast, you have to ride with people who are better than you.” Seems to make sense right? Well… does it? Maybe it isn’t that simple. I say it depends on who you are riding with… like Didier Rous & Laurent Lefevre of Bouygues Telecom.

Training Camp
All over the world teams are gathering for the now famous pre-season training camps, and my team is no exception. Based in the south of France my team CA Castelsarrasin has strong links to the Bouygues Telecom team. In fact we have the dubious duty of wearing Bouygues Telecom shorts. I say dubious because our team clothing looks bizarre – for some reason our shorts and jersey don’t go together at all. In fact if you didn’t know we had links to the Bouygues Telecom Pro Tour team, you would think we were just a bunch of Sunday wanabees who got a cheap deal on turquoise Bouygues shorts at our local bike store. No worries though, for 07 will shorts will be red. Much better.

The give & take of ‘official’ association with a ProTour team… note the obligatory Bouygues shorts mixed with the local team jersey. Hmm.

We had our first team gathering a little before Christmas, but our real training camp was in mid January. Not all of our riders were present as some of the Australians are starting their season over the other side of the world at the Tour down Under, Tour of Siam, and Trust House Classic. Our 2 new British recruits were able to join us for a couple days and it was good to meet them. Rides varied from simple base miles to various forms of intervals, and went from 3 hours to 5 hours in length. The weather wasn’t always great, but we have been lucky this winter and temperatures were good for an early season get-together.

Special Guests
One morning as we were milling around the team house, adjusting our shoes and pulling on our beautiful team kit, our DS told us that we had to leave on time that day, because a couple of other guys were going to be joining us. I thought “sure whatever, probably a couple of weekend riders from the local club, or some sponsors or something.” And as for leaving on time… well I didn’t think much of that. We are in France after all. Every ride has been a “10am sharp” start. By 10:30 or 11am we might be getting rolling. It takes some getting used to, but once you’ve got the hang of it, it’s great! Time is a totally different concept in these Mediterranean European countries.

So as the team is dispersed throughout the team house and adjoining parking lot doing what everyone does before a ride, adjusting bikes, getting dressed, talking, drinking coffee and as was the case for myself: eating (5 hour rides at 10am have always been hard to digest for me. 10am is early! Can you tell I’ve been living here for a little too long?) one more car shot into the parking lot and skidded to a holt. No big deal right, that’s how everyone drives here, especially young racer types.

The doors open and out pop Didier Rous and Laurent Lefevre. They meander around and say hi to everyone before going to the back of the Mercedes SUV and pulling out their brand-spanking-new white Time bikes. As they get ready for the ride you can see that despite their years and years of cycling they still have a youthful love of cycling. Getting ready takes them ages and they spent most of their time stealing each other’s water bottles and throwing stuff at one another.

Eventually everyone is ready roll, except for… that’s right Didier and Laurent. Both live locally and were about to head off to the Bouygues training camp and Team presentation a few days later. In fact Didier Rous is closely involved with the team and his name feature prominently down the side of the jersey. He is one of the team’s founding members. Thanks to him we get a bunch of “hand-me-downs” from the pro tour team; time trial bikes, disc wheels, cars etc.

Winter training in the south of France can get a bit damp.

And They’re Off
The order of the day was 4 hours with some big gear intervals up and down a hill out in the middle of nowhere. It was a 50k ride to the hill and a 50k ride back. This gave us a good chance to chat to the guys and it gave them a good chance to… kill us. Luckily for us they spent a fair amount of time on the front. That was fine… until we hit a hill.

One hill in particular seems to feature prominently in my memory. They were both on the front at the foot of the climb. As we gradually meandered our way up the hill, people started dropping off the back of the group. The pace was nice and steady, only I guess it was just that little bit above everyone’s threshold. The sort of pace were you think “this is a little fast, oh well, it’s not that bad, it’s a bit hard but we can hang on OK” and then a minute later you are gasping for breath and seeing stars. By the top of the climb there were only 3 or 4 of us left on their wheel. Now I’m not totally sure about this, but talking to the rest of team after the ride, we think they were turning a big gear and chatting, joking and generally looking around at the scenery the entire way up the climb. It’s hard to say, we were concentrating so hard on not blacking out that I must admit we didn’t pay much attention to their chit-chat. So… conclusion: they are strong… and don’t get me wrong, our team are no slouches. We’re an Elite squad… but obviously not elite enough. 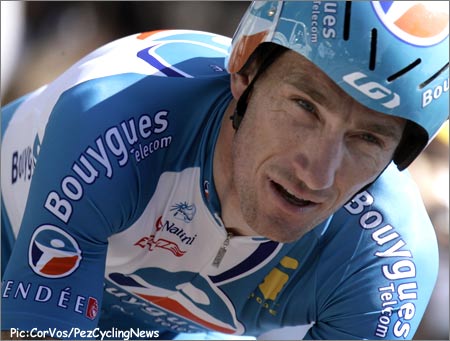 Didier Rous showed us just how different the ‘ProTour’ level is.

Muscle Intervals
So eventually we made it to the hill for our intervals. Big gear, about 50rpm, low heart-rate and up and down the hill we went like a bunch of yoyos. We did 8 reps of about 5 or 6 minutes each, those guys did a bunch more in the same amount of time. They worked pretty hard and were covered in sweat by the end.

Following them up the climb a couple times you could tell Lefevre was pretty fit. He was looking pretty lean and as a teammate of mine pointed out, you could actually see his veins on his legs through his tights. They seemed to have fun going up and down that hill, Lefevre joked about and pulled faces at everyone both on the up and down the hill. 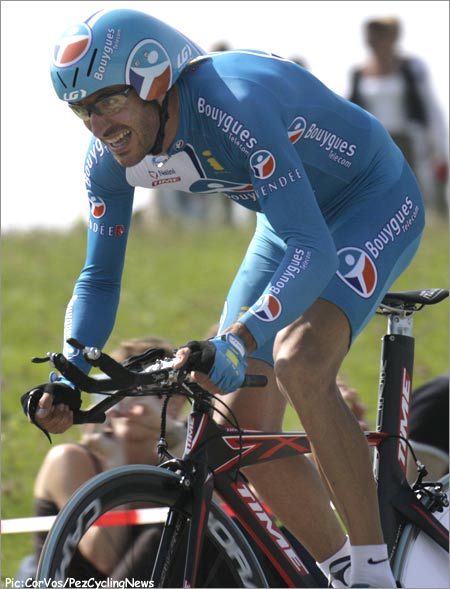 Laurent Lefevre: veins that bulge through his tights.

Thank God That’s Over
On our ride back home (legs tingling and burning from the workout) I had a chat with Levefre to see what was on the books for him this season. Actually he chatted and I panted. He was getting ready for the Tour de Langkawi before returning to do the early season French races Paris Nice, Classic Haribo etc. He was hoping to do Tour of California but the team hasn’t been accepted. He was looking forward to Tour de Langkawi as the weather is good and the women aren’t bad either. When I asked him about the fact that most of the guys from last year’s event still haven’t received payment of prize money etc, he didn’t seem too bothered. He obviously wasn’t impressed, but I kind of got the feeling he wasn’t going to Malaysia for prize money… just sunshine, women and a few miles in the legs. It’s a tough life. 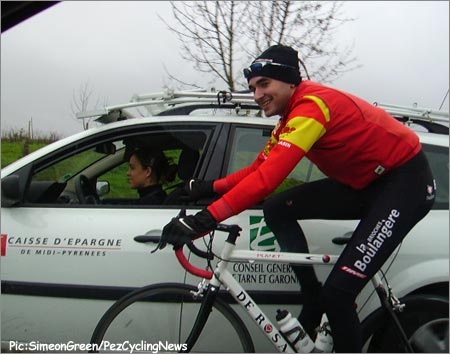 Holding the car on hill repeats makes for a solid upper-body workout.

Home Again Home Again Jiggedy Jig
Eventually all this fun had to come to an end. We returned home with some 130 odd kilometers in about 4 hours, and a fair average speed considering the slow big gear hill reps. Even though the Bouygues boys were there, it wasn’t much harder than any of the other training rides during camp, but it did add a little “je ne sais quoi.”

There was talk of them joining us the next day as well, but when it came to it they didn’t. Didier is a big hunting fan, and I think he went hunting with some buddies. Either that or we were too fast for them. 😉

Sadly the misty weather didn’t allow for much picture taking, so sorry about the lack of good pics.

Next time Didier and his buddies come out to play I’ll try and get some better pictures. No promises though because I’ll be cross-eyed just trying to keep up with them and I’m not sure pulling out my camera would be a wise move. I’d probably wobble and nock them off ruining their season. Now THAT would be a story!

So riding with people who are faster than you; is it such a good idea? Depends on who they are!