PEZ: In The Team Car

PEZ was front seat (shotgun actually) for the white knuckled ride of spending a day in a Team car at the recent Tour Mediterraneen. No rules, wide-open road, obscure Austrian dance music and fast corners give “driving” a whole new meaning.

Long Time No See
The recent tour Mediterraneen was a great opportunity for me to catch up with old teammate from my AG2R Development team days, but this time only one of us was actually racing. Wolfgang Murer is now in his third season as a Pro on the Continental Professional Team Elk-Haus Simplon. I hadn’t seen him for a few years, and although we crossed paths at various races around Europe over the years, we hadn’t really seen each other since 2003. Wolfgang is possibly the nicest guy in pro cycling, always happy to sign an autograph, unfazed at spending time chatting to friends and fans just minutes before the start, he makes a big effort to give bottles and hats to nearby kids and he has a permanent smile across his face. Thanks to Wolfgang’s kindness I was able to blag my way into the Elk-Haus Simplon team car for the Stage 1 Team Time Trial… and what a nail biting ride it was! 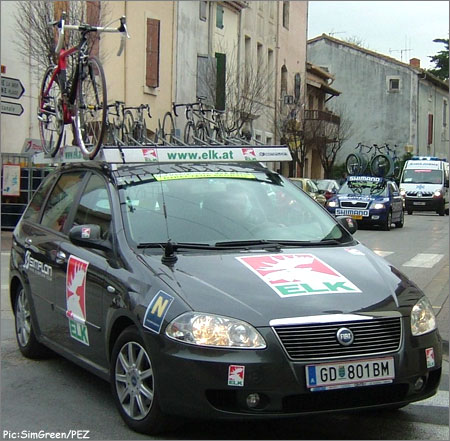 Wolfgang Murer of Team Elk-Haus Simplon got Pez into the Team Car.

Team Cars
As much of an attraction as the riders themselves, team cars attract the flashes of many a roadside camera, and not just that of nearby speed cameras! The flashy, spare-bike-laden cars that seemingly outnumber the racers are a bizarre mix of practicality and high-speed motor-sports. When in a bike race standard road rules and laws don’t apply. Driving a team car can be both unbelievably boring and the biggest most exhilarating thrill you will ever have in a car. You go from hours of sitting at a slow (slow for a car that is, not for a bike!) 40kph to flying down the road, zigzagging through towns and slicing by other vehicles at highly illegal speeds, sliding round corners and generally doing stuff you would only expect to see on a race track. The Team Time Trial was a perfect example of all these things, nicely compressed into 30 minutes of hell-razing action and speed. 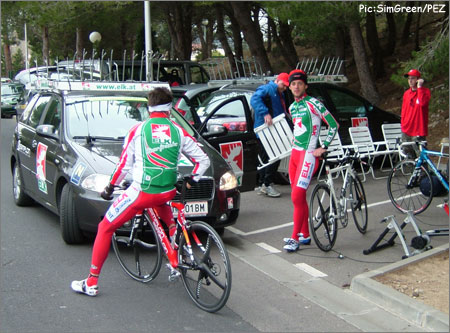 Team cars are an attraction unto themselves.

The Road Rules
North America is generally known for it’s somewhat strict driving laws and slow speed-limits, so some people may not be overly impressed with what is coming… oh well, here goes nothing… 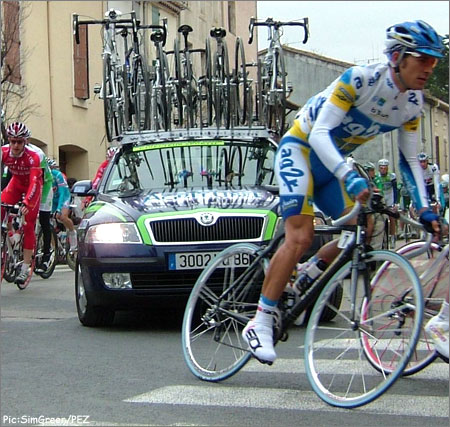 When it comes to a bike race, standard driving rules don’t apply.

Rules? There are none. Well that’s not actually true, but from the outside it sure looks that way. There are a set of rules that all team car drivers know and respect, but these rules have nothing to do with standard road rules. In fact some of them are direct opposites. An example is that you must stay as close a physically possible to the car in front of you… and in case you are wondering, YES, you do quite often see cars rear-ending each other. Look closely at a team car, and it isn’t uncommon to see bumpers held on with zip-ties for example. Cars can drive on either side of the road, pass on blind corners, speed cameras and speed limits don’t apply, seat belts seem to be optional, you can hang out the window or climb onto the roof without anyone batting an eyelid. Frankly the line of team cars behind the peleton known as the “caravan” is sheer madness, total craziness and is the perfect example of organized chaos. 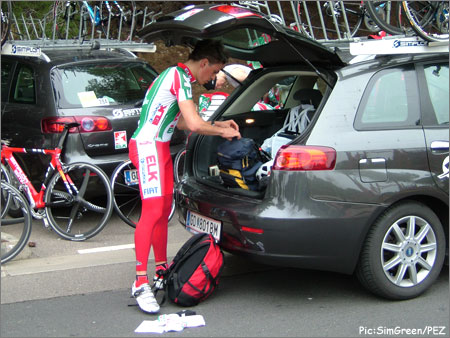 Ready? Wait For It…Wait For It…
The Elk boys were very relaxed before such a big and difficult event. They got ready and warmed up as if they had done this a thousand times before… oh wait, that’s right, they have done this a thousand time before. Once everyone was warmed-up, decked out in skinsuits and TT bikes it was time to get the show on the road… quite literally. I climbed into the “death seat” beside the number two DS (Directeur Sportif) in the team’s second car. Being in the second car would give me the opportunity to not only see the riders and follow the development of the race, but also see the car in front as it slid round corners, weaved all over the road and basically just did it’s thing. Just seconds from the start, as the cars lined up behind the starting ramp, with no other reason than to remind us of how friendly the Elk boys really are, Wolfgang appeared at the car window to shoot the breeze. “Hi Sim. How is it going? We don’t have all our good Time Trial equipment today. We came straight from Italy so we only have some of our TT stuff. Back in Austria we have new bikes and Time Trial helmets. Arhhh, it’s only early season ey. I should go now, see you at the finish…” and off he went to join his teammates on the start ramp. Good thing too, because even if he wasn’t nervous, I sure was! I was worried he would miss the start and was chewing my nails in reaction to his outwardly relaxed approach. 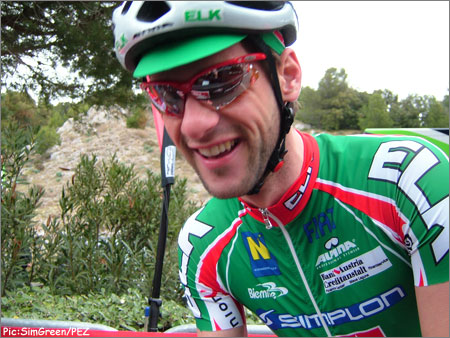 Wolfgang Murer shoots the breeze just seconds before the start.

The Death Seat
The team slid down the start ramp and Michael Schumacher beside me gunned the Fiat pushing me back into the depths of my seat. After slicing our way through town, sliding around round-abouts and bouncing over vicious speed bumps under the watchful eyes of the Gendarme, we hit the wide-open road. Things calmed down a little. Not for the riders however as they were going uphill with a slight headwind at 50kph, but the straight, wide road made for a smooth ride back in the car. After a while the riders headed uphill towards the Col de la Clape and things back in the car were pretty calm. 35kph uphill in a car feels fairly slow. On the way up the climb the mechanic in the number one car hung out the window and clung to the roof of the car to take some photos. After some 8km of climbing we reached the top of the climb. 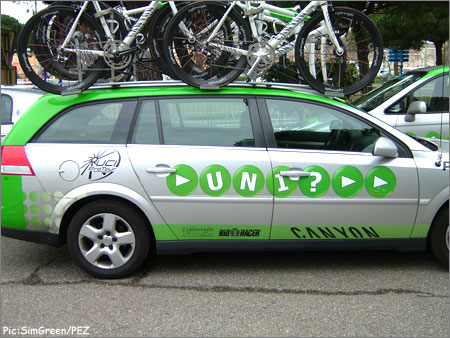 Unibet’s car and whole team is the subject of huge controversy at the moment – and wrongly it seems.

Things in the car were pretty quiet. My driver and I had pretty much discussed everything we were going to discuss and we had been sitting back watching the riders meander their way up the climb for some time. But as is usually the case in the team cars, things were about to change. As we went over the top of the climb and started the descent down the other side, the car quickly picked up speed. As opposed to the uphill where the car was plodding away easily keeping up with the rider’s pace, the descent saw the riders absolutely fly down the hill, leaning hard into the corners with the car struggling to keep up. Fast accelerations on the straights trying to keep up with the team, then a very hard jam on the breaks as we enter the corner… 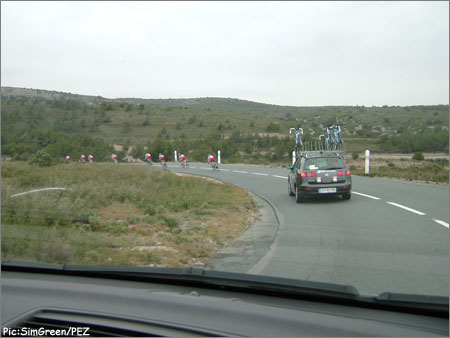 Everything in the car crashes to one side as we nail the corner, then another fast acceleration before another sharp jam on the breaks for the next corner, and so on and so forth as we try as hard as possible to keep up with the charging team hitting speeds of over 80kph on the technical descent!!! 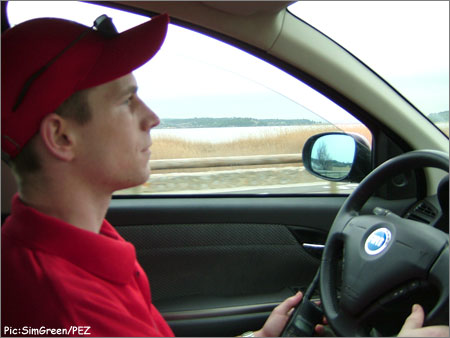 It’s all in a day’s work for these guys.

As with most team car drivers my driver sits quietly behind the wheel, sliding the car around corners as if this was an everyday occurrence… which of course it is for them. Aside from trying to keep the car on the road, the driver has to be fully aware of everything going on around him. As obscure Austrian Techno blasts out the CD player, Radio Tour is squawking in the background, with a hand held radio in one hand the driver keeps in constant contact with the car in front and with the riders. And if you thought that was all the driver has to think about, you were wrong! 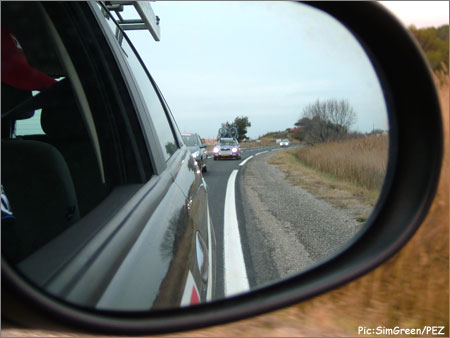 Nine riders and almost as many cars. That’s a lot to keep an eye on.

All around us are other cars. Three or four cars line up behind and on either side of us. Commisair cars making sure the team cars aren’t too close to the riders, neutral support is also back there just in case. 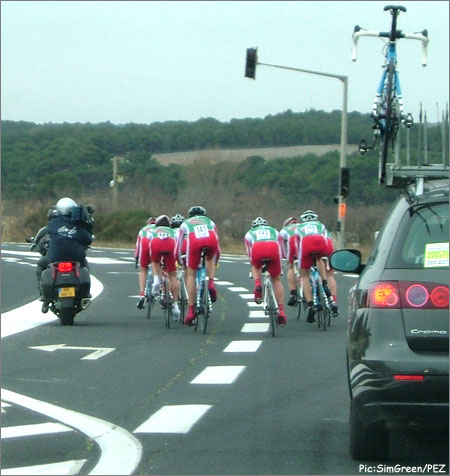 The TV bike comes up for a closer look.

TV motorbikes and press bikes are only inches away from car, sitting happily in our blind-spot, speeding up along side the riders to get the long awaited “money shot” of the team in full action. And of course the driver is also chatting away happily with me about the upcoming season, the way the guys are riding and just generally shooting the breeze. That’s a lot to keep track of for the average Joe, but these guys aren’t the average Joe!

Game Over
Driving a team car is much like racing. It’s hard work and you have to be totally aware of your surroundings. After a good 30 minutes of crazed driving, fun and excitement we shoot into the parking lot, marking the end of the day’s events. The guys put in a good performance and were one of only two teams to keep it together and finish with all riders in the same time. The fatigue is evident on their faces as they try their best to smile and be friendly as they catch their breath. 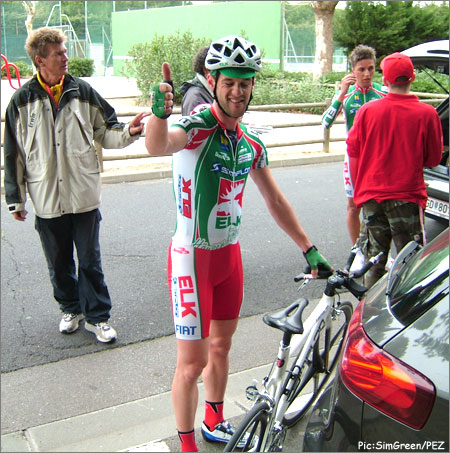 All In A Day’s Work
Just another day at the races. A good day for the boys and a good day for us. But maybe not such a good day for the cars. These poor cars take one heck of a beating. Tires have to be changed regularly as the hard cornering wears them down pretty fast. Suspension also takes a hit as team cars bounce over obstacles that you would normally show down for. It isn’t uncommon to hit the odd curb going through town, which doesn’t help either. The brakes take the brunt of it though, there is a lot of stop/go action in the caravan and the corners are far from easy on the brakes. Clutches can get pretty burned out on mountain stages too. Yep, that’s all part of being a big team. It’s not all about the bike, and it’s not all about the riders either… There’s a lot to think about for the Pro teams

That was a lot of fun! But that being said, don’t try this at home boys and girls!