Following the US Postal Team Presentation on January 23, 2004, select media were invited to spend 10 minutes with Lance in one-on-one interviews. Talking to the biggest name in cycling is something we’d been wanting for a long time, but only in the last couple of weeks did we find out Lance actually wanted to talk to us…

Part 1 of our PEZ-Clusive interview with Lance will appear tomorrow, as an event of this magnitude must be appreciated a bit at a time…

PEZ’s Randall Butler caught the first flight to the Californian coast where the USPS team was training and arrived just before the start of the media press conference.

Here’s How It Started:
I didn’t know what I could ask Lance that hadn’t already been answered. No problem I told myself – I’ve been preparing for this moment for years. Meanwhile my knees were knockin like a loose headset on it’s way to Roubaix…

Shortly after the press conference I was invited to the room where Lance was meeting select media for brief one-on-one interviews. I walked in and joined Lance along with his pals Jogi and Mark Higgins [client services manager with Capital Sports and Entertainment – Lance’s management company]. I dropped it onto the 12 as my frame of mind quickly shifted from anxiety to excitement. My heart was racing… (who’s wouldn’t?)

Before the meeting I asked Jogi Muller (USPS Press Officer) about autographs – “no autographs” he said. I asked about pictures – “no pictures” he said. Jogi must have wondered if I was a reporter or fan who’d snuck in…

PEZ: Hey Lance – that was a great press conference!

LA: Was it all right?

PEZ: Oh it was great – you were really good.

JM: Jokes – all he knows I taught him.

PEZ: So I’m from Toronto.

PEZ: Forgetting Jogi’s advice, I pull out a photo of Lance taken on his historic climb of alpe d’Huez in 2001. I’ve been waiting a long time to get it autographed by him. Worried I might end the interview before it starts I hesitate, then ask…”would you autograph this for me? This was taken by Photo Breton at alpe d’Huez. That’s 2001.”

Lance takes the picture and looks at it in detail like he’s studying his form or maybe thinking back on the moment. He recognizes the shot immediately, recalling the day clearly and says… 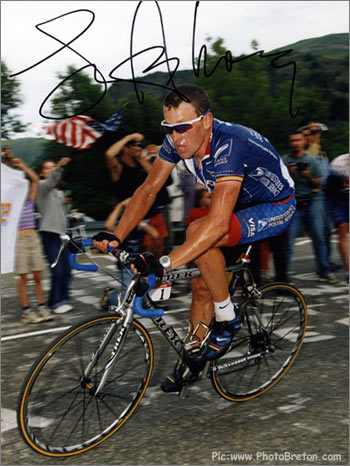 LA: Yeah – that was the best day ever.

PEZ: “Will you do these?” I ask, as I pass a USPS cap and two yellow jersey caps his way…

LA: Allright – ok well, we better ask the questions otherwise these jerks [he says joking with Jogi and Higgins] are going to come in here and tell you to leave.

Lance gives a great interview, so with the autographs out of the way, we moved on to the stuff we really wanted to ask him – tune in tomorrow for Part 1 of Lance Armstrong Unplugged: The PEZ Interview.
Like PEZ? Why not subscribe to our weekly newsletter to receive updates and reminders on what's cool in road cycling?