The Queen of the Classics is just days away, the perfect time to watch Masterlink Film’s latest production – “Road To Roubaix”. Made by documentarians and cycling fans Dave Cooper and David Deal, it’s not your typical ‘race’ movie. We talked with both about the film…

Their take on the race is a fresh one, and although limited by the ASO’s rules to filming ‘around’ the race (don’t look for an account of the actual racing) this film is really about what the riders have to say about it. Much of the film is simple interviews, with a vast array of riders discussing what the race means to them.

The real meat here are interviews with riders who really know and define this race – Tom Boonen, Fabian Cancellara, Stuart O’Grady, and more.

Afficionados may wonder why Lance Armstrong and Levi merit as much time as they do, given Roubaix is not their race, but they do add accessibility for a much broader audience like the middle-American Tour/Lance fan.

Matt: Road to Roubaix pays homage to the film classic Sunday in Hell about the 1976 edition of Paris Roubaix. How did Sunday in Hell and other films like Stars and Watercarriers and the Impossible Hour influence you?

Dave Cooper: We watched Sunday In Hell countless times. It was and remains “the film” about Paris-Roubaix. However, I was influenced most by those opening scenes prior to the race. As a documentarian I think that I approached this project with a keen interest in the human element. The technical aspects of the bikes and things were fascinating. But for me imagining myself in the position of a rider preparing for this race, morning of, knowing how hard and painful it’s going to be; that was what I hope we conveyed in our film. And I think that those opening moments of Sunday In Hell do that as well.

David Deal: Sunday in Hell is probably the first film any fan of Paris-Roubaix watches. I was no different. I watched again from a different angle after we made the decision to make RTR. If anything, I watched it more closely just to get more information on the landscape and the potential for similar shots we could pull off during filming. But in the end, things were different once we arrived in France.

Peter Van Petegem, the winner of the 2003 edition of Paris Roubaix said in your film: “ You have to like the stones – that’s the most important thing.” Many of the interviews were fascinating. Of the riders, mechanics and director sportifs that you spoke with, who would you want to have a beer with and hear more of their stories about racing and why?

Dave Cooper: I’d love to one day sit and have a beer with Juan Antonio Flecha to discuss anything at all. That guy is one of the nicest we met. I think you can tell from his interview in the film. And that says a lot too because everyone we interviewed was so gracious and kind. Flecha is also one of those guys who you just know has good stories. He is a really tough, really strong rider who is capable of winning so many races.

David Deal: George Hincapie, no question. He’s not the most charismatic person in the world but the wealth of racing experience he has must be the greatest in the world. It was very obvious he has a highly developed cycling mind. It was fascinating to listen to him talk about strategy. We realized very quickly that there is so much more than who is the strongest on any given day. Things are more complicated; team strategy, luck, etc. I could talk to someone like him for hours. It would be even better after he wins Paris Roubaix. 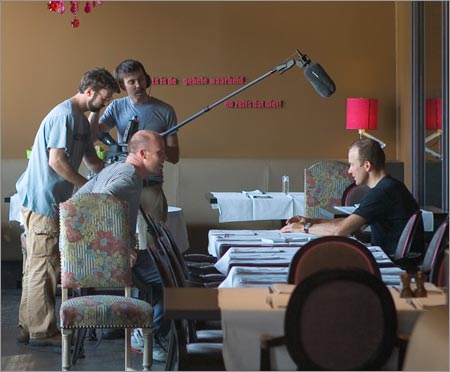 Time stood still for me when I watched a disheartened Lars Michaelson from Team CSC apologize to his family and friends for his DNF in the 2007 edition of Paris Roubaix. He planned to retire after that race and wanted to give Paris Roubaix a fitting farewell. What were some moments while you were filming that gave you a sense of how important this race is to its participants?

Dave Cooper: That Michaelson moment is so profound to me. I’m a family man. I cannot imagine giving myself over to a career that keeps me on the move for most of the year, leaving my family on their own. I don’t think I’ve got the stuff for that kind of life. So when I watch Lars Michaelson discuss his regret having crashed… it gets me every time. I feel it too!

However, the moment for me that I think says a lot is when O’Grady returns to the bus after winning and his son is there waiting for him. He sees his father and yells “Daddy! Daddy! I missed you a lot.” As a father myself I can almost imagine the emotion during that brief exchange between father and son. And that moment in some way must be what winning Roubaix is all about—and we captured it on film!

David Deal: Paris Roubaix is different from any other races on the calendar. You can tell that just by talking to the riders. There are other races that have a great history but P-R is the one and only race that is like none other. The landscape, the farm roads, the cobbles, the history, the region, the weather, the velodrome, the showers, the length, the fans, the winners. It all makes a difference. Riders have an unusually high degree of respect for the race.

There is a complicated and respectful relationship between the riders and the racing fans of northern Europe. I heard a few times that in order to be successful at Paris Roubaix, one has to “love this race.” George Hincapie said: “Everyday I wake up and I see myself winning it.” And the Flemish people realize how important the history of the region is. Johnny Green said: “ I think the landscape and places and buildings hold a kind of frisson of energy. Great things have happened there like the battle of Waterloo.” Can you talk a little about this unique relationship between riders and the Northern Europeans who come to cheer them on every year?

Dave Cooper: The fans in all of cycling play a huge role. It’s just not a Paris-Roubaix unless there are gobs of people lining the course by Carrefour de l’Arbre. As an American there’s really no sport in the states that compares when it comes to fan participation. In pro cycling the roads are the same roads used by the locals every day. Many people live right along the course. I don’t think you can compare that kind of connection with sports fans here in the states driving to their local stadium—perhaps even painted in their team’s colors—and then driving home. I think the love of the sport is there, but in my opinion the sport of cycling is more intimate. These cycling superstars go by your house every year so close you can touch them. Just try and get close to a NFL star at the stadium. You’d be arrested!

David Deal: I think the rider’s respect the region and what it stands for, the blue collar nature of regions like Roubaix. It’s not a glamorous region and it’s not a glamorous race. It’s very straightforward. The tactics usually consist of the last man standing after a slugfest. I think that’s refreshing for many fans and riders. You get the feeling that everyone who wins at P-R earns it. They’re aren’t too many stories of undeserving winners. 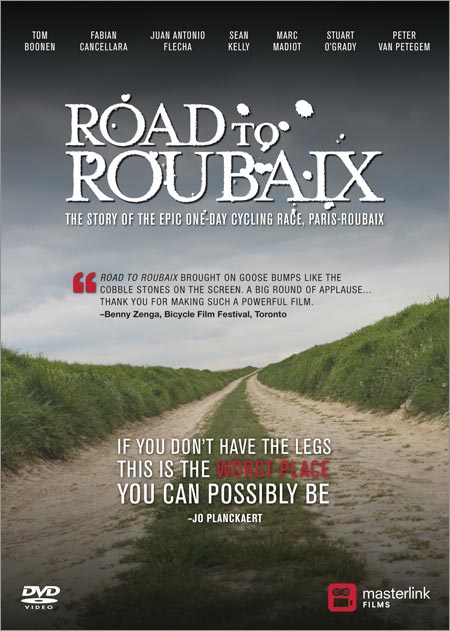 I hope you guys aren’t like Ken Burns. I am still waiting for a sequel to his series: Baseball. Will your next project involve cycling? If so, tell us a little about it.

Dave Cooper: David and I have discussed this a lot over the last few months. Though we can’t make any promises yet, we both feel an almost obligation to the fans that have purchased Road To Roubaix to create another—dare I say better—cycling film as our next project. We haven’t chosen a topic just yet but I don’t think you’ll have to wait too terribly long. We funded Road To Roubaix very modestly but largely ourselves while we continued to make our livings. For the next project we hope to find a producer that can finance us.

We also feel that it’d be a shame not utilize the knowledge we’ve gained by doing so many things the wrong, or difficult way.