PEZ Look: The Growth Of The US Cross Scene

Cyclocross has grown humongously in the US over the past 10 years. It’s always been hugely popular in Belgium and Holland, northern France had its day and even the Italians have jumped in the mud-pit and joined the cross scene, but no other country has shown such rapid growth and fervor for this crazy sport as the US of A. EuroPezman Sim Green returned to the US cross scene this winter to compare today’s events to those of 10 years ago.

As a kid from Europe, I ironically discovered CX racing in the US as a Junior MTBer. Although I had heard of it back home in Europe, I’d never paid much attention to it. I got into some CX races in the US as a way of keeping myself active over the winter. Like most people who try CX racing, I was hooked in no time. Having “discovered” CX in the US about a decade ago, I decided it might be fun to get my Euro-butt back over to the US to see how things had changed.

The 10 Year Comparative
About 10 years ago this PEZ journalist was racing Cyclocross in the Mid Atlantic region of the US. One of the many races I did was in a small park in Reston, just outside of Warrenton DC. The race was organized by Chip Sovek, a training partner of mine and local cyclocross guru. In the 3 years I raced CX in the US I watched the sport grow out of control. The first race I did in Reston was in 1999 and there were only 3 categories (A, B and C) and a total of 37 people for the whole event. By the end of my 3rd year of Cross, there were over 50 guys in my category alone and well over 200 people in total. And that’s nothing compared to now. 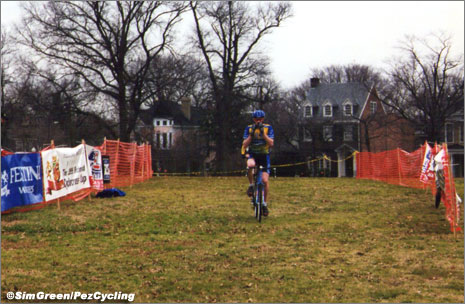 Sim takes the win in Reston ten years ago.

8 years later, on December 6th, I lined up once again for the same race in Reston. Now called the Capitol Cross Classic, the event is still held in the same park in Reston and the organizer is still the ever cheerful Chip Sovek. It was my birthday, and it was really good fun to return to the event and see the changes. That small-time local cross race that wound its way through picnic tables a decade ago, has grown to UCI status and now takes over the whole park. There are now 10 different categories and most fields have well over 50 entrants with some fields exceeding 100 racers on the start line. The quality of the field obviously now includes Pros, guys from as far away as Switzerland and France. Tents, food stands, pits full of team mechanics and spare bikes now line the course where emptiness use to reign. 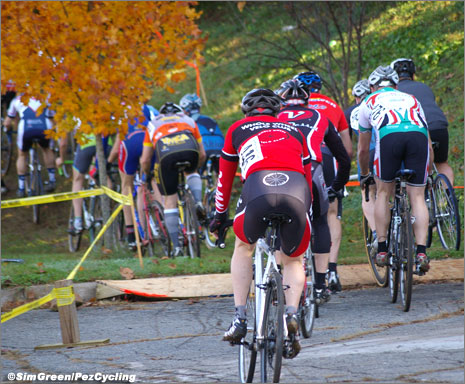 The same race, ten years on, full of racers and spectators.

Why Oh Why?
So what is it about ‘cross that appeals to people? And why has it grown so rapidly in a country that isn’t a mainstream cycling nation? Cross races are inherently spectator friendly. The courses are short and you can usually see most of the race from one spot. The short nature of a cyclocross race (1 hour max) means that the racing is usually sharp and intense, a major plus for spectators. The small venue also means food vendors, beer tents and expos can be set up easily. The US is home to sporting events that tend to be short in nature, and is also the home of NASCAR racing, a form of car racing based around one short circle. Crit racing in the US is also huge in the US and the US even has a national championship for criteriums! This means that US racers are more adapted to short races that consist in going round in circles, and American spectators can relate to CX more than long stage races. 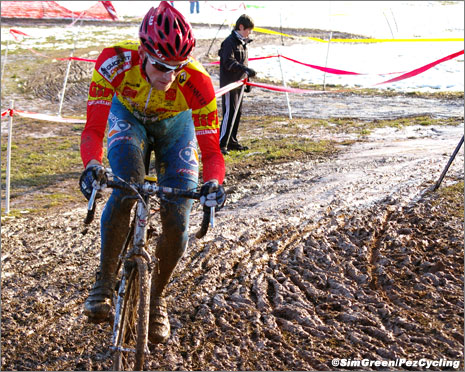 There’s nothing like a little mud to refresh those depleted motivation stores.

A Short Season For A Short Race
The road racing season tends to be pretty short in the US. In the Mid Atlantic region for example, the road season starts in late March, (in Europe it starts in Jan or Feb) and by July the races are getting few and far between, in other countries the season finishes around October if not later. 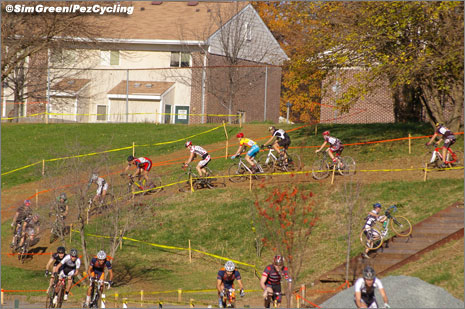 A mix of hard riding and technical finesse makes for great fun.

This means US amateurs aren’t tired from a long road season, and have time to cut off and start getting excited for something new and different. The cyclocross season is also relatively short in the US, generally starting around September and for the most part, ending around December, meaning US racers of all levels have time to take a break both physically and mentally from one discipline well before the other one starts. Hence there is a huge participation in cyclocross, as everyone is ready and fired up to go do battle and fewer people concentrate on one discipline. 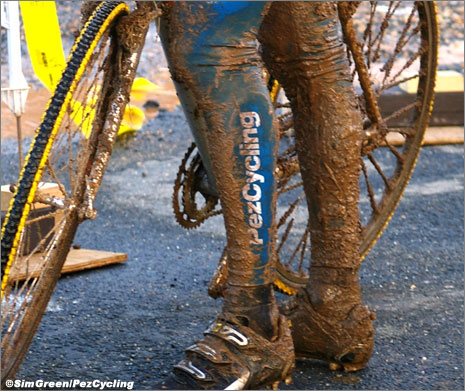 The PEZ leg warmers under a coat of mud.

Money Cross
An appealing factor of CX for the beginner rider is that ideal mix between road and MTB racing. CX has the fun of off-road racing without it being too technical, yet also has the closeness and excitement of road racing without the overwhelming and suffocating effects of a big peloton on the road. The US is a generally wealthy country, and let’s face it, money always comes into it somehow. Racing CX means having another bike, sometimes even 2 bikes so you can have a spare bike in the pits, and that all costs money. 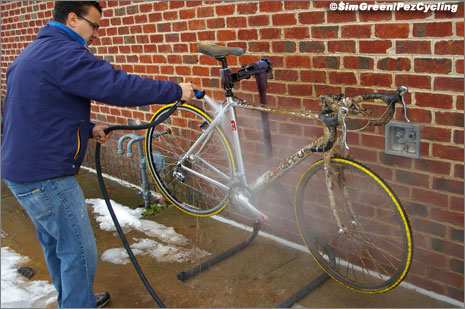 Equipment is a big part of cyclocross and sometimes makes it a hard discipline to get into.

Everyone likes to have new stuff and to play with new toys. New shiny parts to get, CX specific parts, tires and wheels to play with and show off to your friends. We all like new toys and we all love an excuse to be able to go out there and get our muddy mitts on something new and fancy. 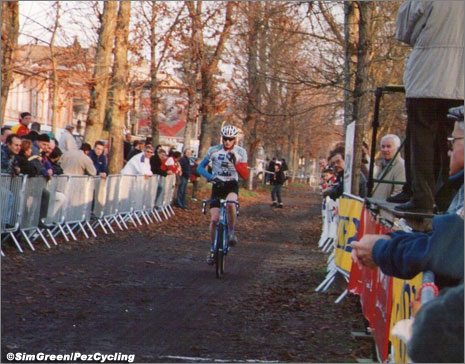 Youth And Future
10 years ago I was by far the youngest rider at most local cross races, and was generally the only U23 rider. There wasn’t even a U23 category for me. Fast forward 10 years and youth is the name of the game. Kids’ races have been included into each event. Two of the top 10 riders in the Elite field in Reston were U23 riders. If you need confirmation that the Cross scene in the US is bright, just take a look at who those two U23 riders were. Number 1 ranked rider in Switzerland, Valentin Scherz (Pro Cycles Scott) and first year U23 rider Joe Dombrowski (Haymarket Bicycles) in his last race on US soil before heading off to Belgium to finish his season in style! With more and more young guys coming out to play in the mud, and fields so big it’s almost overwhelming for the organizers, it’s actually quite scary to think that there is still potential for growth in the US ‘cross scene. Not only is it a friendly and fun athletic activity… (and painful too) it’s also ideally suited to TV coverage. You need relatively few cameras to cover a cross event, the action is fast and furious, the pain evident and the crashes frequent! My only fear would be that it grows so big it stifles itself out and loses that fun and freaky appeal. 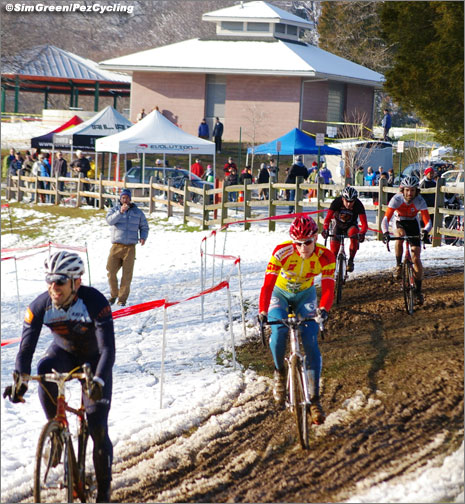 You Know What?
You know what, just get the heck out there and hit your local cross race. It’s pretty hard not to have a good time! It’s great fun, it’s a trip (sometimes literally if you trip over a barrier) and everyone cool is doing it, so be a sheep, do what everyone else is doing, in this instance it’s well worth it! And maybe one day all the Belgians will be heading State-side for the ‘cross season. 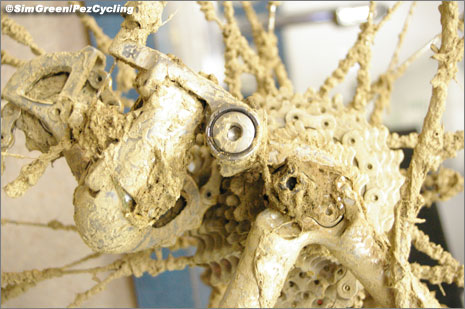 I’d like to thank everyone who made this US-Cross trip possible for me. All the courses I raced were very well designed and were a pleasure to race. I had more fun in the few races I did this year in the US than in however many years I raced CX in Europe. Thanks also to Chip Sovek for opening to the door to his event for me once again, and thanks also to the Warrenton Cycling Center in Warrenton VA for supplying me with some nice Dura Ace wheels and Mavic shoes after a slight mishap with some of my equipment during the trip to the US. Contact Sim: [email protected]
Like PEZ? Why not subscribe to our weekly newsletter to receive updates and reminders on what's cool in road cycling?