“Our men are going to race madly, unflaggingly.” So wrote Henri Desgrange as his brainchild, the Tour de France, got underway in 1903. This quotation opens “Chasing Legends,” a film that views the 2009 Tour through the lens of the cosmopolitan HTC-Columbia professional team.

Do we need yet another video/book/photo album/t-shirt of the Tour de France? What has not been said or shown or experienced in the last century about the cyclists making their way around the Great Hexagon that is France that needs to be said now? “Chasing Legends” features the omnipresent Phil and Paul, along with some other very familiar faces and more than a few time-honoured cliches. But…but..there is much more to “Chasing Legends” and revealing as to why the Tour de France remains, even through the least generous of appraisals, the world’s biggest annual sporting event. 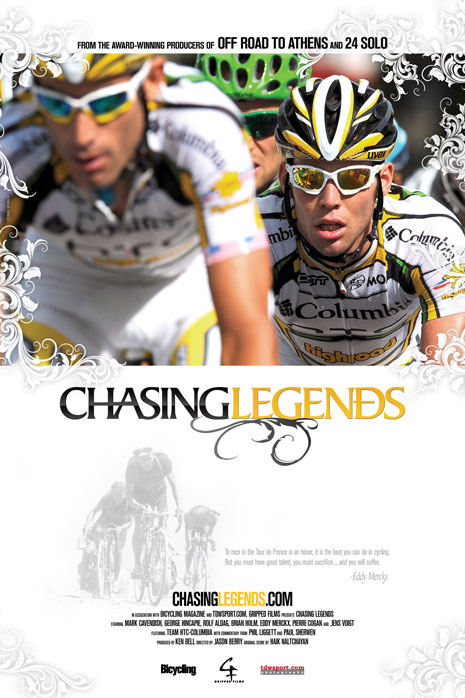 The film opens with a charming sepia-tinted vignette of a boy riding his own bike to the front gate to watch the racers go by in the Dawn of Time Racing Era. Admittedly the scene looks much more like the Mid-Atlantic States than La France Profonde, but it is a nice introduction to the scene that follows.

The sequence showing the individual time trial on July 4 is one of the best I have seen in a cycling DVD. Monaco is the picturesque backdrop as the cyclists roll through and up to the starthouse. There is tension and confusion all around but when the riders depart and are on the course, it all becomes sublimely ordered, moving towards the climax where Fabian Cancellara overtakes Denis Menchov just before the finish.

We are given some history of the Tour and the narrative moves on. It is not entirely clear what has happened since Fabian put on the Yellow Jersey but as we move around inside HTC-Columbia the mood is upbeat. No wonder: unmatchable sprinter Mark Cavendish won the second stage. 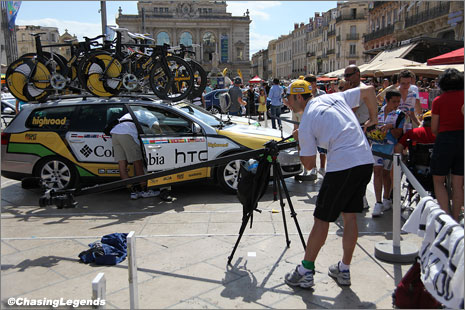 But Stage 3 is much more interesting from our standpoint. Working out a strategy as the stage unfolds, the riders realize that there is the opportunity to not only get Cavendish properly positioned for another victory but also to split the field in the windy flatness of Southern France. Brian Holm and Rolf Aldag, managing from the team car and providing the comic relief in much of “Chasing Legends,” are uncertain that this will work but once the HTC-Columbia riders are at the front together and Michael Rogers commands them to go full out when they round the corner, the managers offer a laconic “You heard him. Go hard now.” over the radio. And go hard they do, smashing the field on a day that was expected to be a quiet one. Race favourites suddenly find themselves isolated at the back and desperately try to close the gap. When Cavendish wins his second sprint of the 2009 Tour, the damage is done. 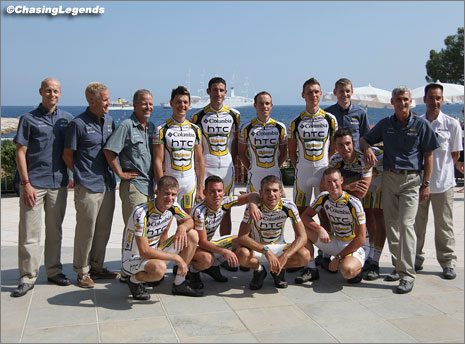 The next day sees one of the stranger team time trial of the modern Tour era as the race takes places on the narrow winding roads around Montpellier, roads clearly not up to the speeds of racers in 2009 as all kinds of racers, including most of the Bbox Bouyges team, end up on the road, or in the ditch, at some point. 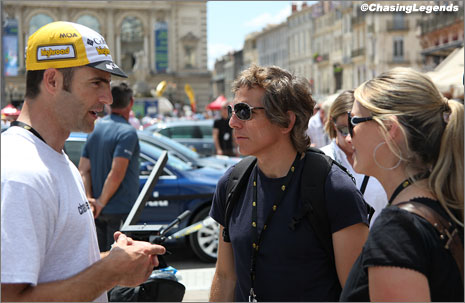 After a moment with an Annoying and Irrelevant Celebrity Tour Groupie (in this case actor Ben Stiller rather than the usual Robin Williams), we move onto a fascinating segment with Pierre Cogan, the oldest surviving Tour participant at 97. He raced in 1935, followed by a hiatus (“I escaped from the prison camp three times!”) until 1947, with his final TdF being in 1951, when he was 36 years old. At various points we also hear from the cool, calm Eddy Merckx and his counterpoint, crowd favourite Jens Voigt, who is cartoon-character-excited about the Tour (and not even on the HTC-Columbia team). Well, he is excited until the genuinely awful moment in the film when he falls on his face in the Alps and his race is over.

The 96th Tour de France is, like all the Tours before it, different. There is Cavendish’s powerful presence in the sprints; George Hincapie’s obvious disappointment at not getting the Yellow Jersey, his chances snuffed after what several in the film believe to be the sheer orneryness of another team; and the general grinding down of a finely-calibrated racing team over three weeks. People show the strain: watch Rolf Aldag’s reaction as Brian Holm puts his hand on Rolf’s headrest in the team car. An important player, Bob Stapleton, the owner of the team, comes across as very analytical and clearly focussed as the successful businessman he was before Deutsche Telekom brought him in to rescue the dysfunctional team. 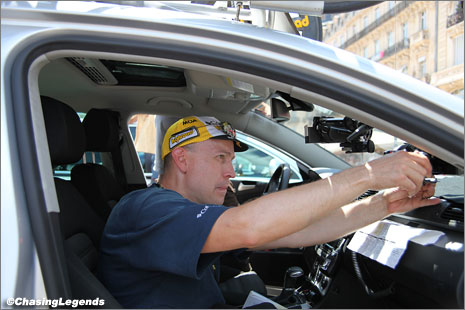 This professionalism is a hallmark of the team and quite dissimilar to what we saw of Team CSC-Saxo Bank in the film “Overcoming,” where Bjarne Riis, who looks like he wishes he had never seen a bicycle, often appears to be at a loss as to what to do with his riders. Success clearly comes in many flavours at the Tour de France. So does failure but the bad news in “Chasing Legends” is about hard days on the road or broken collarbones rather than expulsion for drug use. Frankly, we all know that doping exists in the peleton but we hear enough about it elsewhere. The Telekom team had plenty of dopers (including Rolf Aldag) but HTC-Columbia has indicated that it will act decisively against any team member using drugs. No HTC- Columbia rider has run afoul of this position since the team was reorganized under Stapleton in 2008. 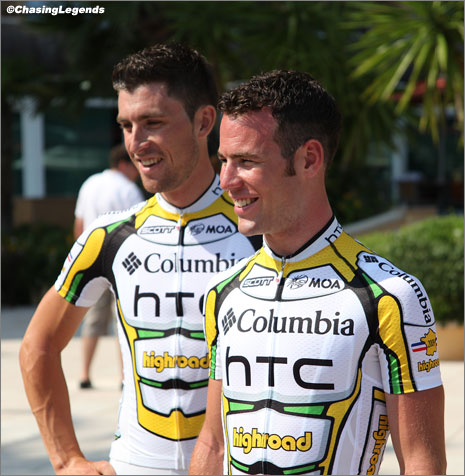 The HTC-Columbia riders that we meet, particularly Maxime Monfort, Bernhard Eisel, Tony Martin and George Hincapie, are all very agreeable and dedicated to their craft. The undoubted star is Mark Cavendish, who flits in and out of the documentary, his personality seemingly on some kind of knife-edge between Enthusiastic Kid and Angry Young Man. He speaks very highly of his own team and they come through him on one of the sprint stages he was not expected to win, where he had to climb a Category 2 hill to get to the finish line. He talks about the art of sprinting and in summing up professional bike racing and its dangers he says, with more than a little smug satisfaction: “You know that little voice in your head that says “I really shouldn’t do that? We don’t have that.” 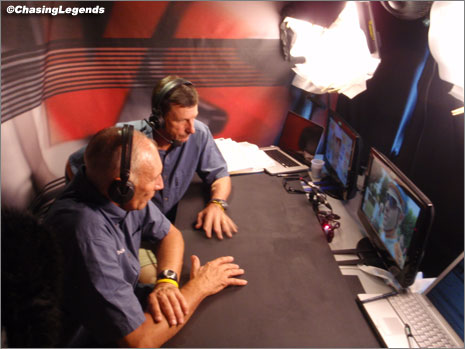 Because of this focus on HTC-Columbia, which, because of Cavendish and his lead-out train, can be considered primarily a sprinter’s team, the filmmakers cover the mountain stages in a more general way but the scenery is always fantastic. But in an impressive move on legendary Mont Ventoux, young Tony Martin (referred to by his teammates and managers as “Panzerwagen”) breaks away with Juan Manuel Garate to contest the stage win. At the end he cannot outclimb the experienced Spanish specialist but is an exciting moment and we share Rolf and Brian’s disappointment in the team car. 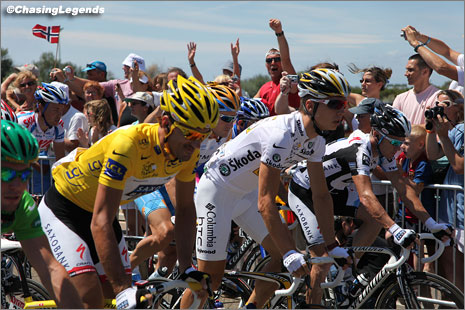 It is a long road to get to Paris and the film builds up to the final battle, on the iconic Champs d’Elysee. Once again, Mark Cavendish, completing his first Tour de France, is triumphant, following lead-out Mark Renshaw to a perfectly-timed, devastating victory. This was his fifth stage win of the 2009 race. 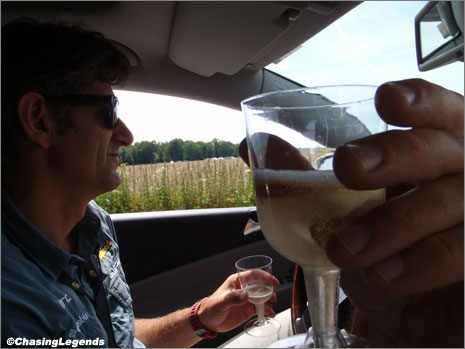 We see Contador and Schleck and Armstrong on the podium but, to a large extent, the race they won was different from the Tour de France we see in “Chasing Legends.” We see the machinery of the race–the mechanics, the chef, the soigneurs, the battered riders trying to get through another day of what amounts to 21 races in a row. The filmmakers managed to get some extraordinary images, including footage from bike-mounted cameras, as they wove together this impressive movie. 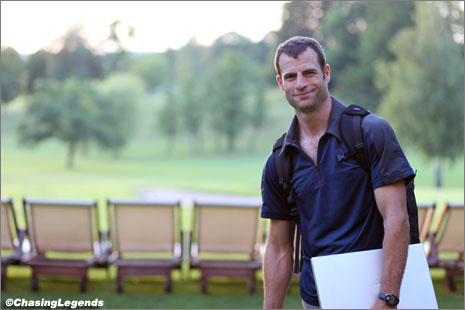 It is difficult to believe that a crew of four made this documentary, riding around France in a rental van with no air-conditioning, and working with a budget of less than $250,000. It is not often that a movie’s credits include “Investors,” many of whom seem to be family members. The film has been presented at individual showings in movie theatres since its was released in May 2010 and I am sure that there was a festive environment everywhere as Like-Minded Individuals all shared their passion for cycling. 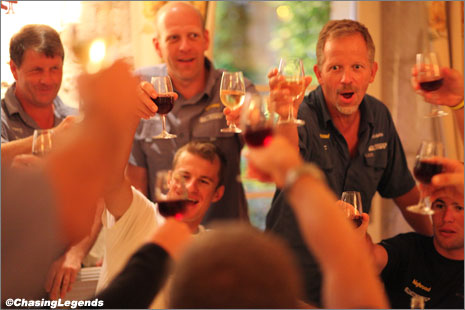 “Chasing Legends” is a fan’s movie and shows the riders and the race itself in the heroic light so treasured by Henri Desgrange and the promoters who followed him. Many of the riders featured in the film no longer ride for HTC-Columbia but the charm of “Chasing Legends,” the DVD version of which includes a second disc of interviews, will certainly outlive the team itself. So, yes, this film was worth making and every Tour de France is a different story, or many different stories. You will not receive credit as an “Investor,” but buy “Chasing Legends” so that the filmmakers can do other races!

A High Definition Documentary about the Tour de France

US$ 34.95, available at: www.grippedstore.com (after December 2 for the UK market)

***
When not eating like Mark Cavendish in the off-season, Leslie Reissner can be found doing his imitation of Jens Voigt (“Shut up, Legs!”) while riding at www.tindonkey.com