Every negroni has a story – some begin the moment the orange elixer touches my lips, others connect me to another point in time.  And while mixing and drinking at home affords the luxury to adjust the recipe to perfection, sometimes it’s the location that pins the memory to my mental cork board.  A recent trip to Italy set the ideal backdrop for my best negronis of 2014.

No matter how many of my favourite cocktails I drink each year and how much I love every one of them, it’s the next one that promises to be the best.   It’s medicinal qualities (otherwise known as ‘flavours’) suggest the perfect cure for what ails ya… some call it a vacation in a glass, or a simple way to put a smile on your face, perhaps the transition from work day to something else.  I say its all of the above. 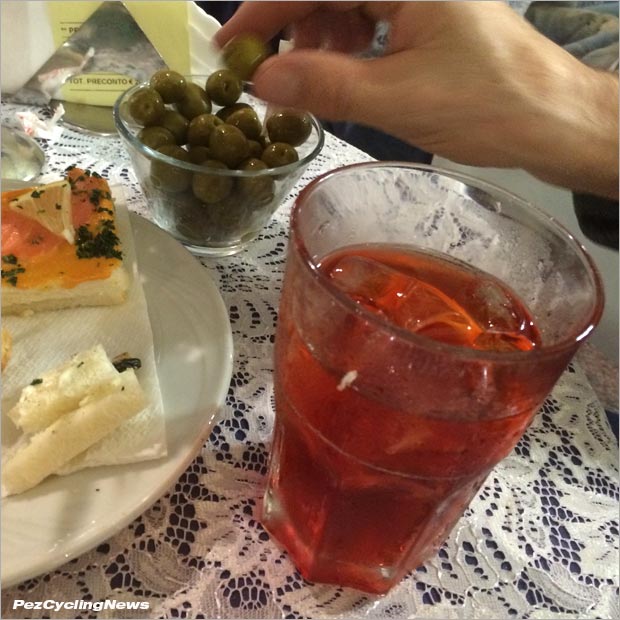 In a word it’s the Negroni – and that it’s being touted by lumberjack-bearded twenty-something baristas from coast to coast should in no way be taken as a sign of impeding demise.  If you’ve followed this website with even half an eye over the past decade, you’ll know it as the world’s best cocktail – in my books at least.  And after almost one hundred years since its birth, it’ll be around long after the young Yosemite Sams of the hipster circuit have long moved onto the next fad.

As a quick recap – the Negroni was reportedly invented in 1919 in a Florentine Bar by a certain Count Negroni who asked that the soda water in his Americano be replaced with gin.  Flash forward to another point in time to one of my own first recorded negroni tastings circa 2004 – I distinctly recall watching the bartender in a cool London lounge called Jewel muddle orange into the glass first – a trick I took on in my own preparations for some time after.  That drink cost something like 20 pounds… you know – the really expensive British kind.  But that memory is priceless. 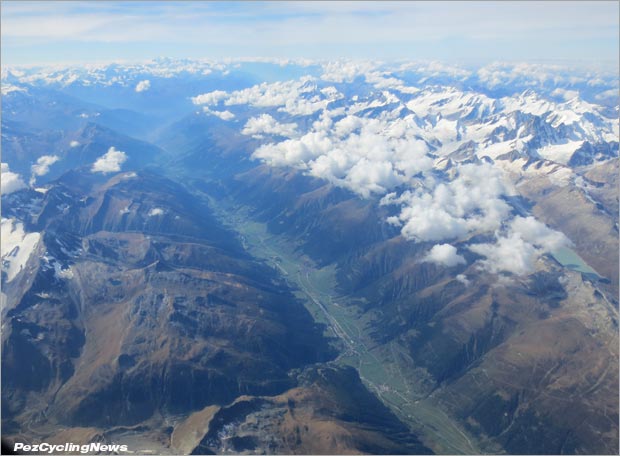 Negroni Rule #41: Taking your negroni in a far-off land generally adds to the experience, and if that means crossing the Alps – even better.

In my ten+ years of drinking negronjs I’ve written several epistles on the merits & pleasures of imbibing this amazing cocktail.  2014 has been a very good year for drinking negronis – at least if you’re me – and not simply because each one tasted so damn good – but because each one brings its own story to the mental photo album that’s filling up my gray-mattered hard drive.  Luckily I’ve recorded some of the best with an actual camera.

In early October Mrs. Pez and I did something we’d been waiting 10 years to do – return to Italy for a holiday together – without the kids.  After years of battling it out in the trenches with the mini-me’s, these seven days were as awesome as anyone with two kids under 10 can appreciate. 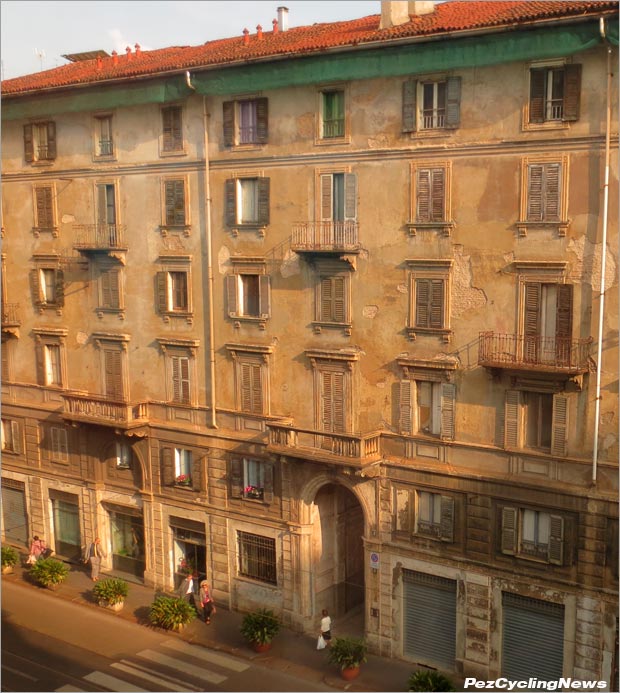 The setting sun in signals the onset of cocktail hour in Milano.

Getting to Italy is no easy feat, and after a 10 hour flight, layover in Frankfurt, another flight to Italy, tracking down the rental car, navigating our way into Milan, getting lost, getting found, and getting to the hotel, we’d been awake for something like 30 hours.  A rejuvenating shower did the trick and with ‘just starting my holiday’ adrenaline coursing through our veins, we hit the streets of Milan to join the fray. 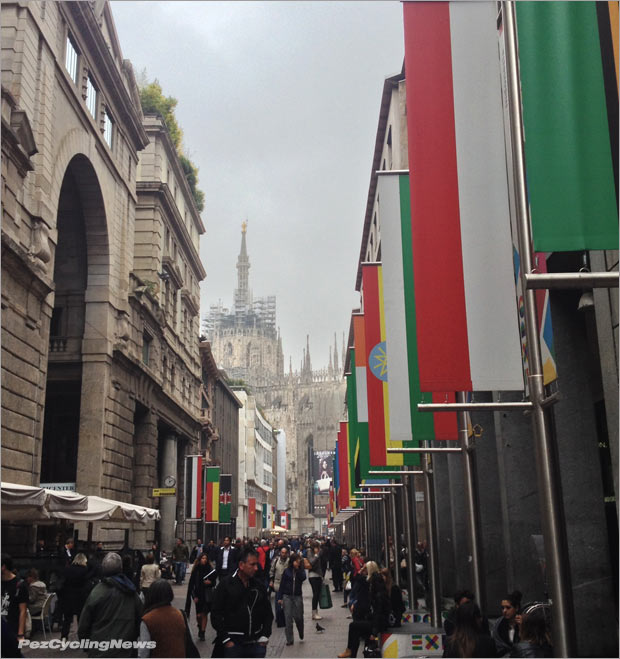 The time shift is a doozey, but I didn’t care.  I was just happy to be here with my wife.  I didn’t even mind following along patiently as the woman I married, who is also a woman who loves to shop, did the things that any lady with her interest in fashion would do in the capital of Italian fashion. (I kept my mouth shut and went into a lot of stores.)

Now my normal re-entry to Euro-time calls for a beer & pizza – or something similarly easy on the system.  I’ve had enough strange  food/booze reactions to know how my body reacts on no sleep.  But by about 6:00PM, Mrs. Pez was ready to think about dinner, and when I asked what she felt like – enthusiastically responded with: 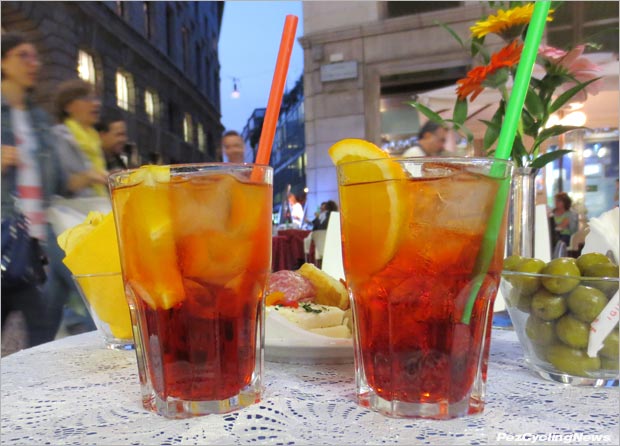 Usually she’s the voice of caution when it comes to drinking, but after a careful consideration of like, oh, 5 seconds… I was on board.

We pulled up to one of those over-priced sidewalk cafes just down from the Duomo – the ones with the chairs all facing out so everyone can watch the show, and two of the biggest negronis I’ve seen were soon placed on the table by the white & black attired waiter.   I’ll admit that even for an aficionado like me, these super-sized models were a bit unwieldy.

That… is a great memory.

Day 2 on the tour was the full Milanese experience – I even missed my pre-planned recovery nap due to Corso Buenos Aires having just too many shops to cover in one afternoon.  But that evening we ventured off-course in search of uncharted territory we could discover together – nothing like making your own holiday memories, right? 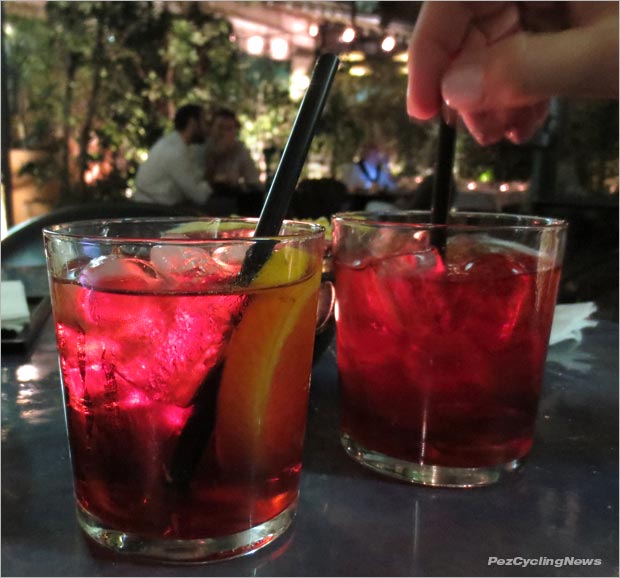 We discovered a very cool bar in a hidden courtyard off Corso Como – itself a packed pedestrian thoroughfare filled with outdoor cafes and restaurants.  The address & name of the shopping, dining, art complex are the same: 10 Corso Como.  It’s cool because although it’s just steps away from too many people & tourists, its ‘giardino interno’ (interior garden) is an oasis of calm and Milanese sophistication, with low, cool lighting, a perfectly peaceful place to tempt the tastebuds with an apertivo.  It’s unassuming doorway makes it completely unexpected from the street, but the result was another perfect setting for cocktail hour.

My most anticipated negroni, however, came on day 3 as our chase of the Giro di Lombardia would lead us to a much anticipated visit to Bergamo.  I lived here in 1998, have many fond memories of the place, and have been back several times in recent years for both holiday and while chasing the Giro. 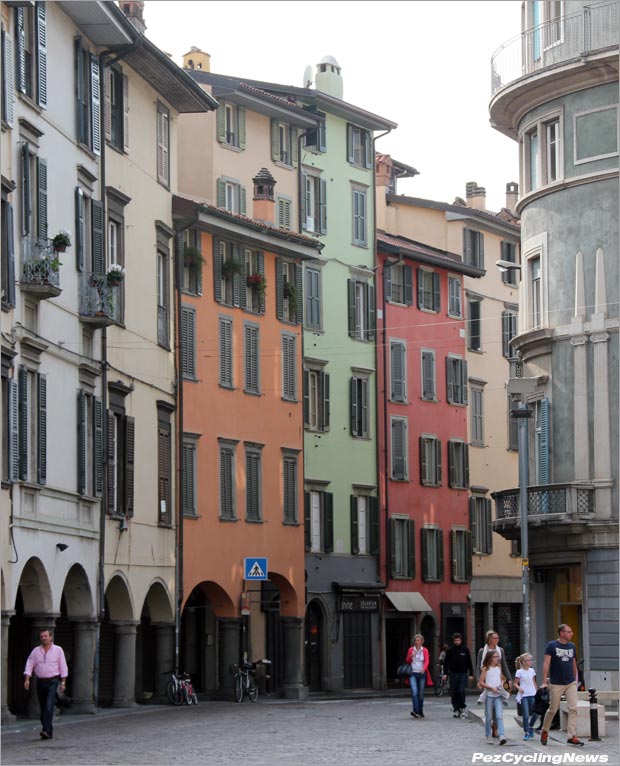 That’s my old apartment… there on the left.

The day was off to a good start when Alessandro suggested we take a celebratory espresso before the race start at a random cafe in Como, and we found ourselves in a bar that was equally equipped for post-race celebrations too.  But even for me, 10 AM is a tad early for cocktail hour, although this did whet my appetite for what was to come after the race. 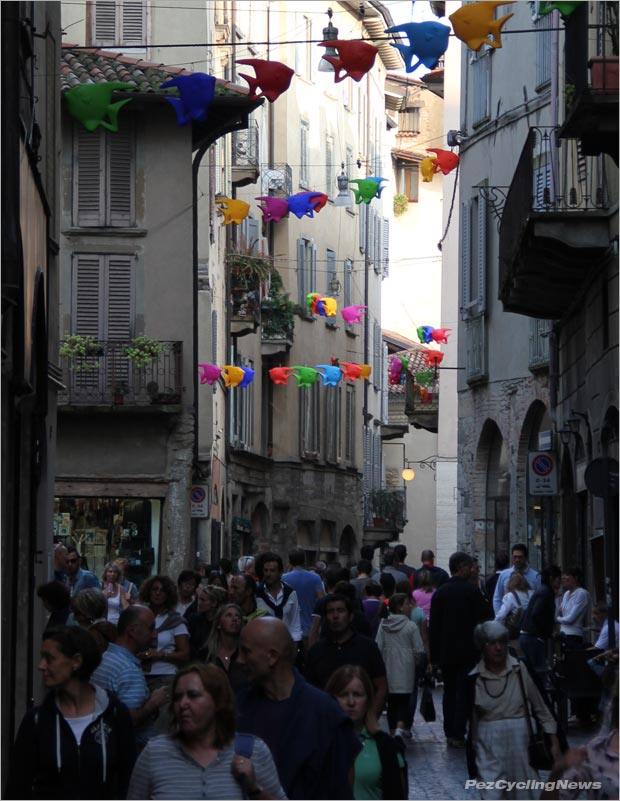 After the race, Mrs. Pez and I walked up the narrow cobbled streets into Bergamo’s old town – the “Citta Alta” for dinner at a favourite restaurant, preceded by a leisurely negroni at what proved to be perhaps the best possible location… Caffe del Tasso in the old town’s main square.  In early October the sun is already low in the sky, but the unseasonably warm day made the outdoor seating ideal. 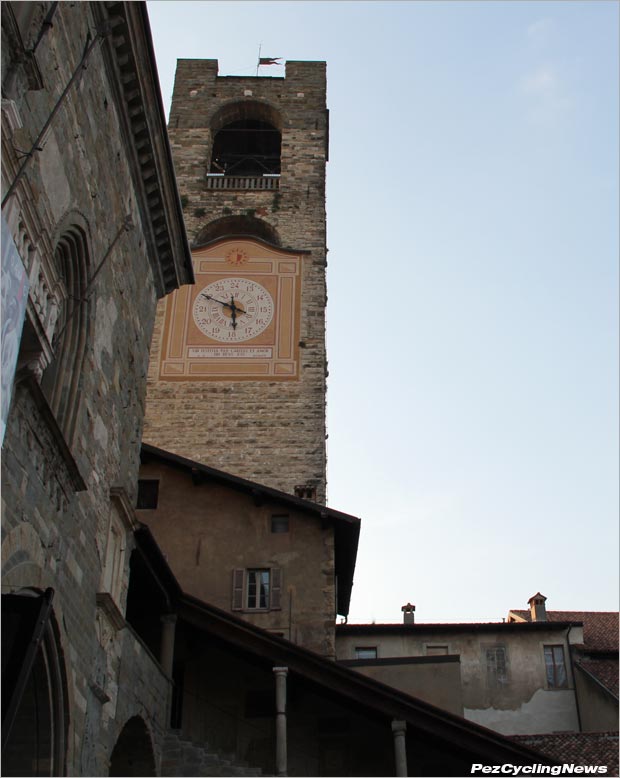 Bergamo dates back to Medieval times, as many of Italy’s walled hilltop towns do, and the cafe’s website says they’ve been serving up smiles for over 500 years.  But the only time I was concerned with was the present, and luckily a piazza-side table opened up as we arrived, and negronis were duly ordered. 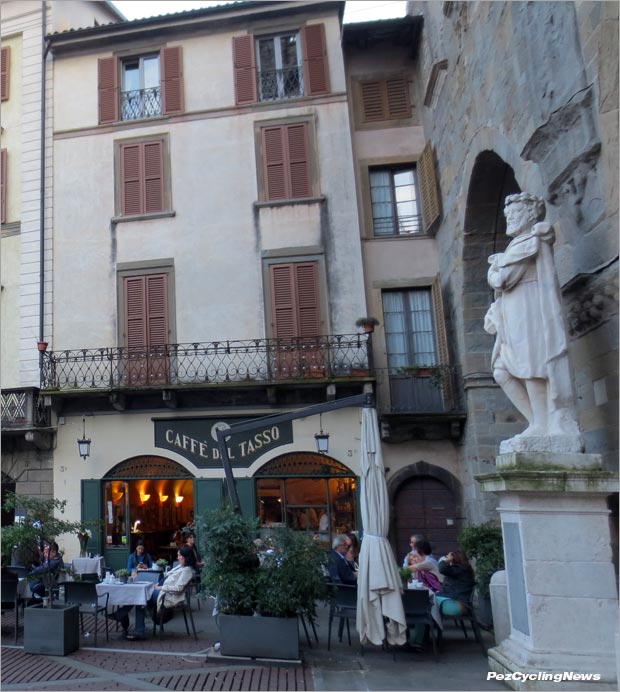 As usual in Italy, a lovely round of snacks accompanied our drinks – it makes cocktail hour so… oh what’s the word…  Civilized.  It also helps keep the hunger at bay so cocktails can be enjoyed at a leisurely pace – essential to the complete cocktail experience. 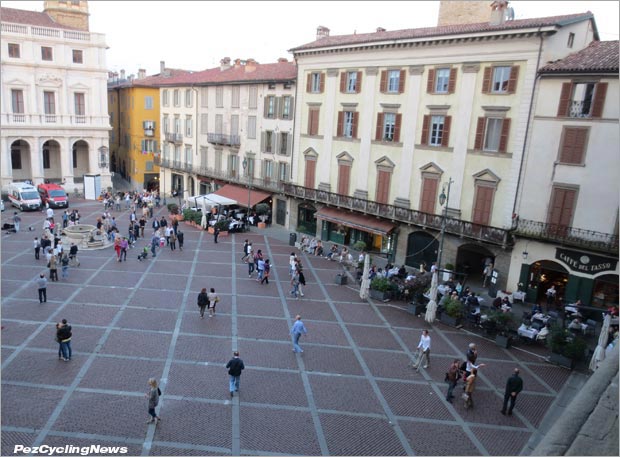 I regaled Mrs. Pez with a tale of sipping a cold beer at this very bar after a short but hot ride over the nearby Passo Ganda during the 2011 Giro d’Italia.  (Another excellent example of the negroni connecting me to another point in time.) 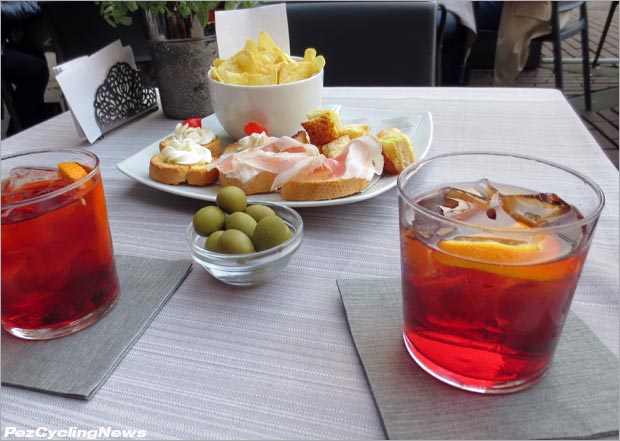 The drinks were fantastic, and after a huge day on the race, and a huge wait to finally be back in Italy with my wife sipping my favourite drink in a gorgeous setting, the satisfaction was much more than these words can describe.

Much like a bike ride, the mark of a great cocktail is how it can define moments in time, and the negroni helps me keep track of a lot more dates and events than any drink should.  Of course the drink itself is delicious, but it’s the good times that go along with it that keep me comin’ back.  Speaking which… it’s cocktail hour here at PEZ HQ… 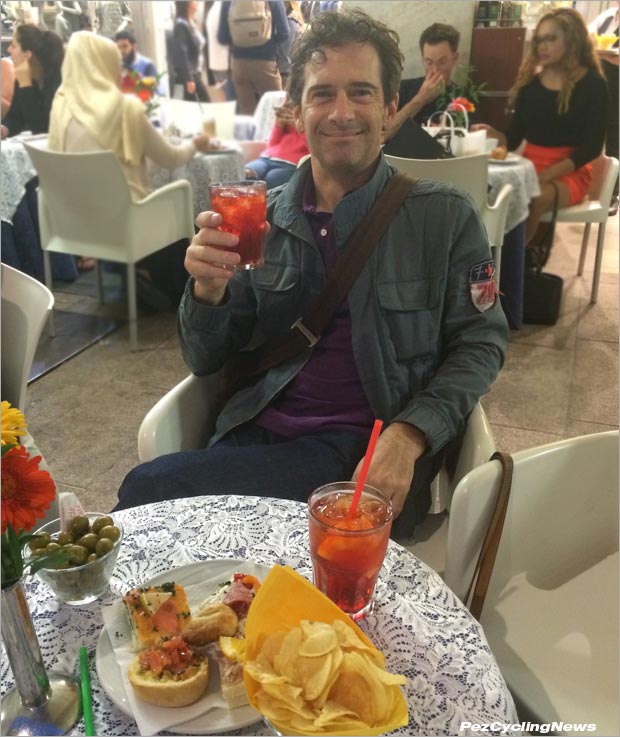