It’s Negroni Week across the land (at least that’s what they’re saying on the interweb), but as I replied to the PEZ-Fans who pointed this out… it’s always Negroni Week at PEZ HQ. So what a perfect time to look back at my best negronis of the 2015 Giro d’Italia.

My fondness of the negroni cocktail has been well documented on these pages, so it’ll be no surprise to loyal PEZ-fans that as the Post-Giro dust settles and we return to our regularly scheduled lives, I take pause to consider how the 2015 edition of the Giro d’Italia rated on my own “Negroni Index”.  I’m still amazed at what new experiences … or considerations… I seem to have with each sip of this drink. It’s been a constant companion for the past dozen years, and it’s been there for the best moments of my life ever since I discovered it around 2003. 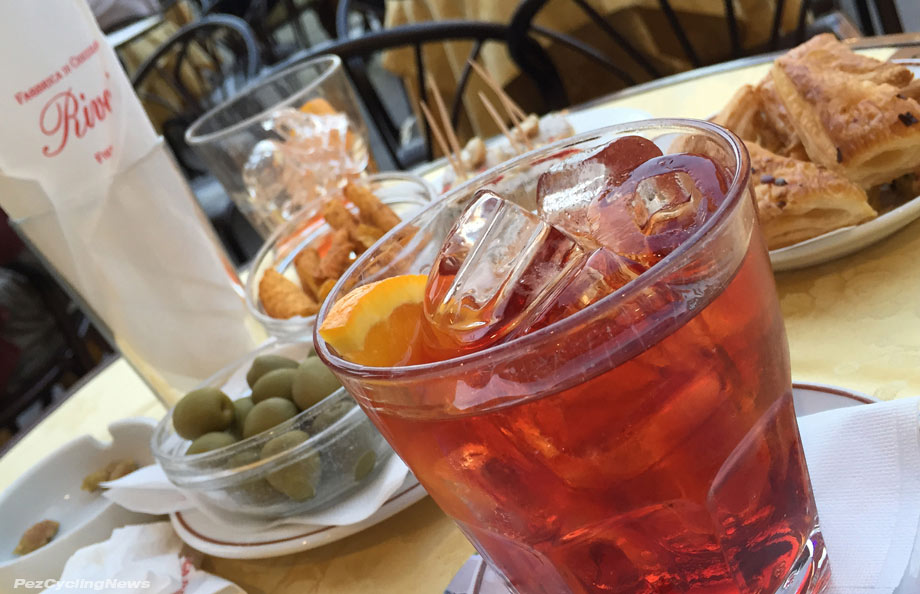 For 15 days in May I chased around Italy – I drove 2500km and stayed in 7 different hotels: Milan, Lake Garda (the excellent GardaBikeHotel), Cesentico (the also excellent Hotel Lungomare), San Remo, Sestri Levante, Massa and Florence. I chased 5 stages of the Giro, rode my bike several times (including one 6 hour 132km trek to conquer the Carpegna climb so loved by Marco Pantani that required several day’s recovery)… it was a busy trip with several things that had to get done each day.

In spite of the hectic schedule, I always looked forward to my much needed ‘pausa’ – finding, sipping, and enjoying my daily negroni and the calm, reflection, and general lifting of spirits that come with it. Negroni time usually started sometime after 8PM when I’d finally closed the laptop, showered away the day’s dirt, and stepped out into the evening passagiata that Italians do so well, to find a welcoming bar with an able barista.

1. As Integration To Another Time Zone
Getting to the Giro is no easy task – but after being awake for about 24 hours, I arrive in Milan and make it to my hotel by around 3PM local time. I’ve learned the best way to get adjusted to Euro-time is to take a rejuvenating shower, grab a quick espresso macchiato, and join the fray in Milan’s vibrant Duomo & fashion district.

The walking and energy of being in a new place that is nothing like where I was 12 hours ago always gives a welcomed boost, and a bit of shopping to cover off Mrs’ Pez’s list eases the mind so I can relax later with a cocktail and dinner.

Finding the right bar is essential – and Milan is full of em. I’ve often pulled up a streetside table at one of the over-priced cafe’s near the Duomo, sit back and watch the entertaining parade of humanity pass by. But on this Saturday, the Corso Vittoria Emanuele II was even more packed than normal, and the number of street musicians playing Italian-ized versions of 50’s rock & roll & Beatles songs made the place simply uninhabitable. Don’t get me wrong – these guys are fun to watch – but more in a ‘passing by’ sense. 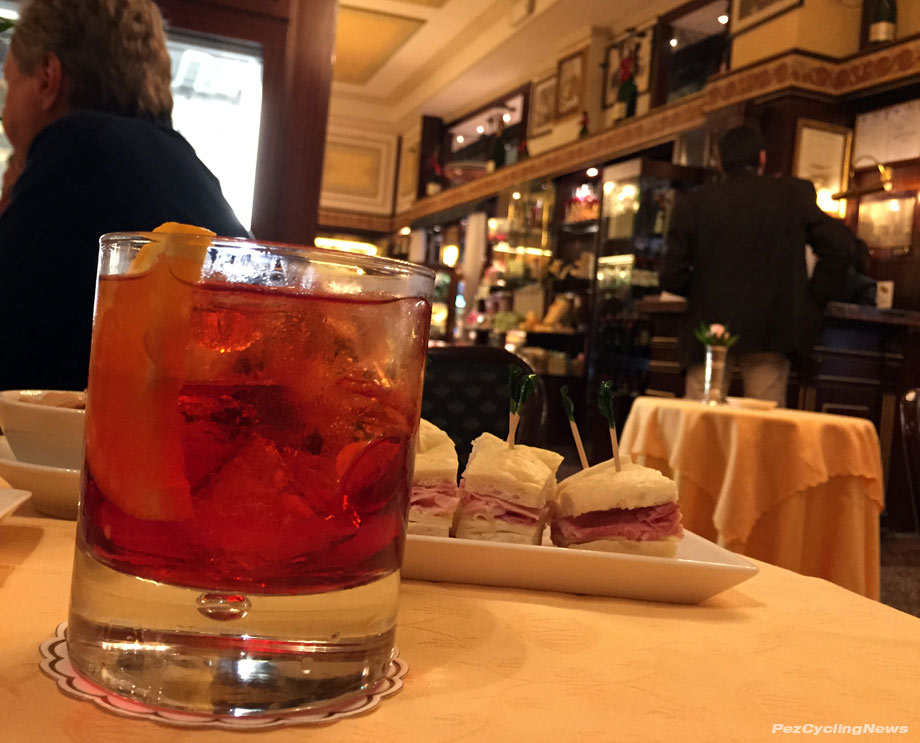 I decided to head back to the awesome Bar Cova on via Montenapoleone in the nearby fashion district where Mrs Pez and I took the final cocktails of our trip here last October. This place is great – it was founded in 1817, so is akin to Rome’s Cafe Grec. The interior is lavish in an 18th century way, the walls adorned with old photos and paraphernalia that you just don’t see back home. The customers are a mix of well-heeled Milanese business-types and fashionistas, and tourists like myself who think this place represents a genuine “Milan” experience. The waiters are professiosnals who make this a career. They’re usually men and some women of a mature age, well dressed in shirts and ties, and serving with one eye on you and the other on the rest of the room… unless they don’t like you, in which case they’ll just ignore you.

There’s a sign that say’s “no photos”, but I couldn’t resist, and regretted not taking more when I was here last time. 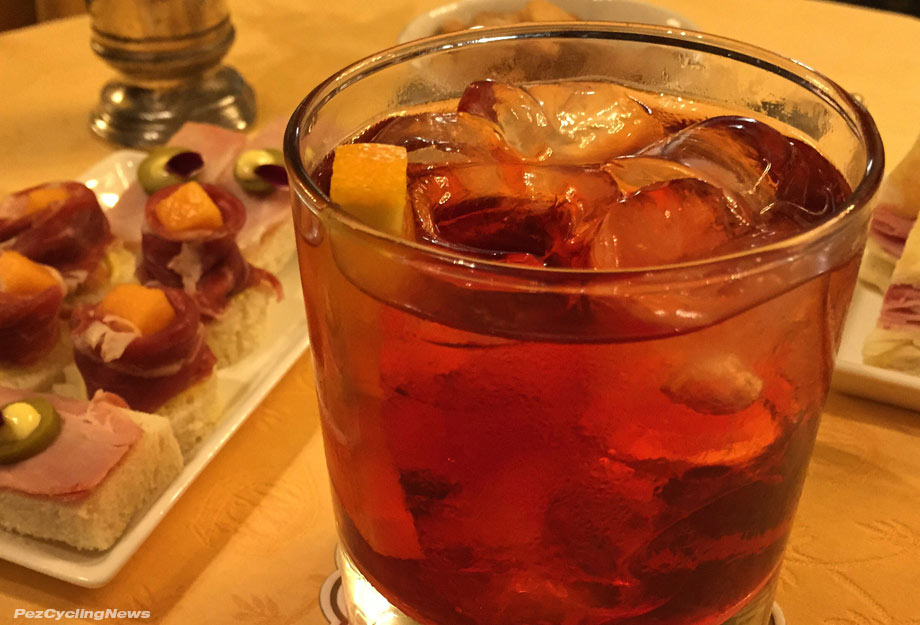 Even though my body thinks it’s breakfast time, my watch tells me it’s approaching dinner hour, so with negroni duly ordered and delivered, I settled in to enjoy the solitude and reflect on how far my person had travelled in less than a day – and here I was surrounded by what still seemed like a movie set I’d stumbled into. (That’s also part of the jet lag methinks). 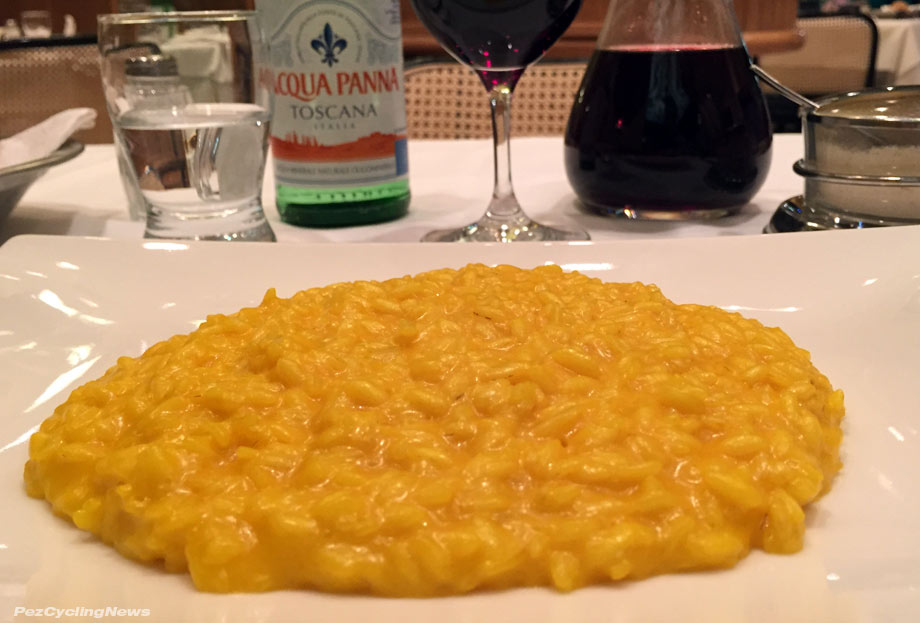 There’s a great place I go for dinner in Milan called the Ristorante Charleston – an unexpected English sounding name for a place that has served me consistently excellent food for almost a decade of visits. The same gent still manages the front as when I first visited, (although he never remembers me) and I always order the Risotto Milanese to start – it’s the only choice in my books. 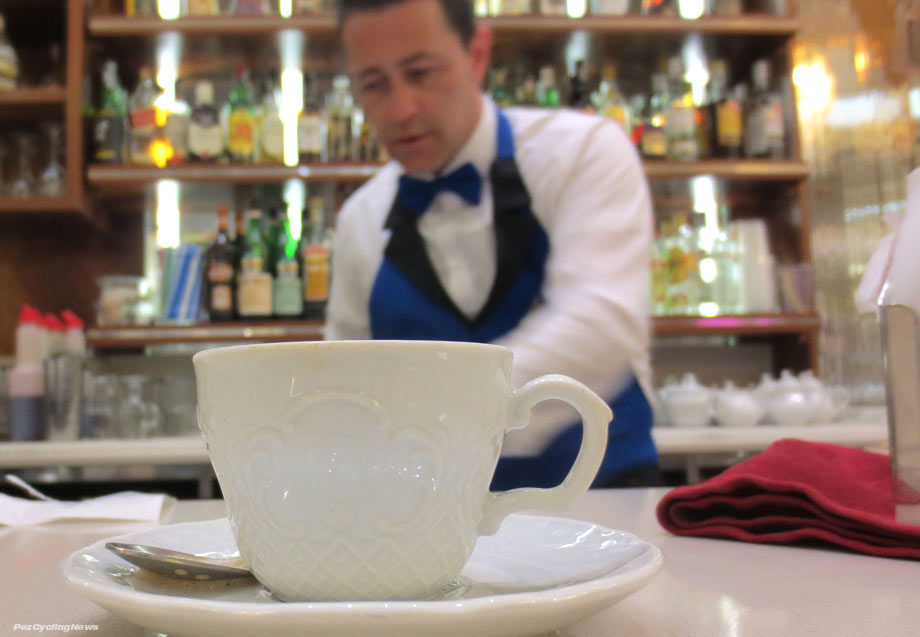 After dinner, my walk back to the hotel includes a coffee from another local bar I seem to stumble into when I can. The baristas are the same high caliber, and the place just has an air of … refinement… that we just don’t associate with coffee houses back home.

2. Reconnecting With Old Friends
One reason I wanted to cover the opening week of this year’s race was all the stages in Liguria – I love this part of Italy – the sea, the mountains, palm tree, citrus fruits and olive trees everywhere, and some great riding with a full mixed bag of flats along the coast, and all variety of climbs (and descents)  as soon as you turn inland.  Another reason was the chance to reconnect with my old friend Marco – owner of Barolino in Levanto.  I wrote one of my best stories ever after meeting Marco in 2009 when the Giro passed through.  I managed a trip back in 2010 with Mrs. Pez, after that my Giro travels took me to other parts of the land.

This year, I started my ride of stage 4’s Passo del Termine from here, and popped in ahead of the actual stage for a short visit before heading onto the course and driving the roads above Cinque Terre.  Marco’s delayed reaction to recognize me was followed by the best recovery from just that as he leapt out from behind the bar for a genuine bro-hug.

I can’t imagine a person more satisfied with their job and life than Marco – his personality knows no ‘off’ switch – at least when I’ve seen him in the environs of his beloved bar.  Patrons – new and old, from all walks of life – even English speakers who make no efforts with Italian, all receive a kind of ebullient service with their cafe, brioche, spritz, vino or whatever, that leaves no doubt about Marco’s gratitude for their patronage and sheer enjoyment of serving up the best refreshments in all the land.

He’s even gained a sort of local celebrity status since the posting of my video of him mixing us negronis a few years back.  He announced my presence to the bar as the ‘dirrecttore’ of said video – to which people knowing and enthusiastically chimed in with “ah Marco Negroni!  Bravo bravo!”

Barolino and Marco get my highest endorsement – and even my words to describe it pale in comparison to what you experience when you visit yourself. 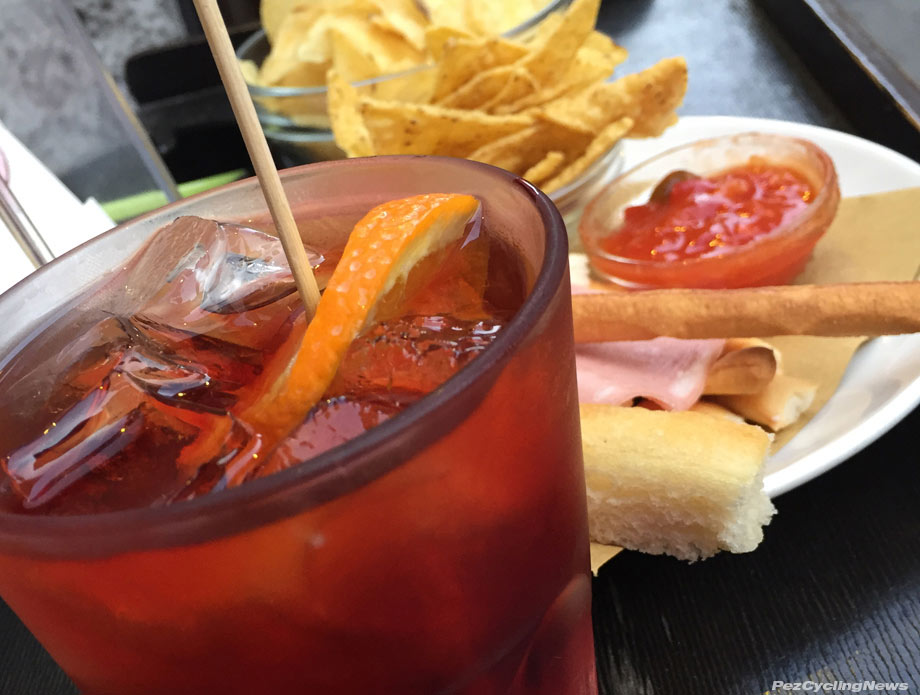 Leaving Levanto, I pulled onto the Giro stage 4 corsa and for one of the most scenic drives in Italy – along the tiny road that connects the famed Cinque Terre where you get to see towns like this Corniglia… 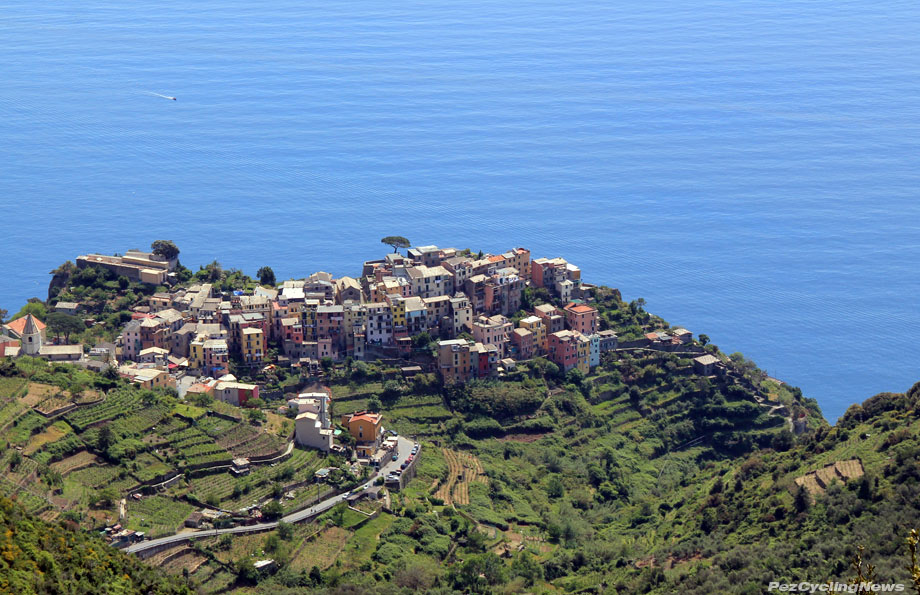 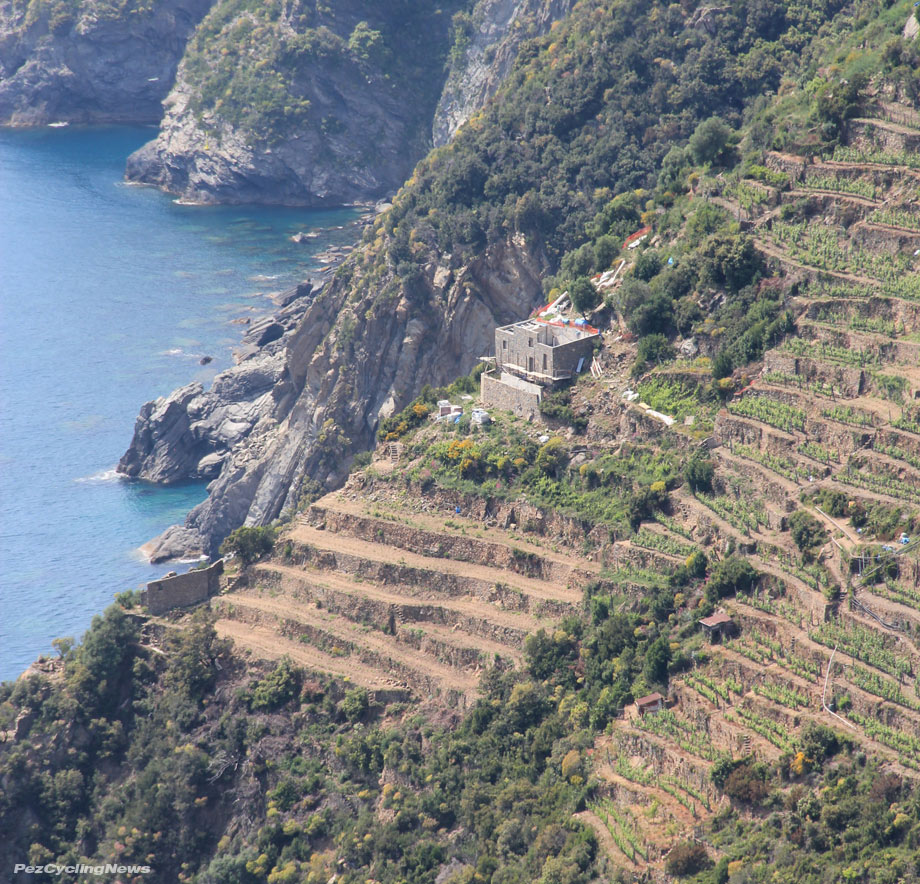 Florence: City Bike Heaven
My last two nights were in Florence – the most convenient airport to exit the race after the opening week. I’ve been here a few times both for holiday and the Giro, but it turns out I think I know the city better than I actually do. The old town center is a maze of tiny ancient streets, and without any geographic landmarks to establish my bearings, I burned up some serious data using my iphone maps. But it only took a few hours of walking by the same buildings 2-3 times before I began to get sorted, and my hotel offered up free city bikes for guests. 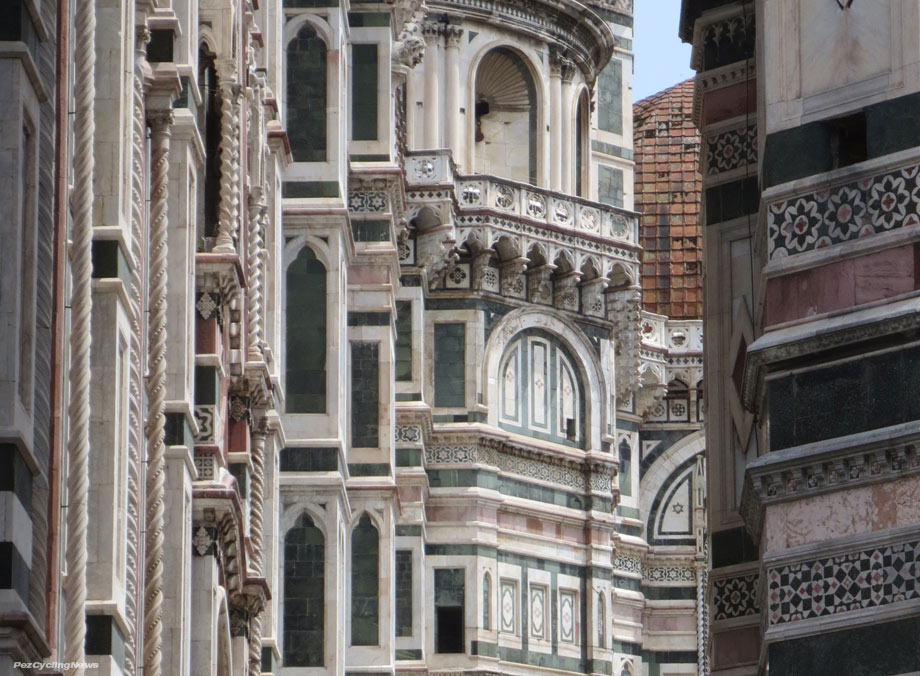 Riding one of these was a new experience for me, but one that I quickly took to. Single speed, step through frame, basket and a big lock – these are all you need for complete and unrestricted access to a flat city like Florence. My skills as a bike courier some 25 years ago quickly returned as I dodged four lanes of cars and cut down one way streets. 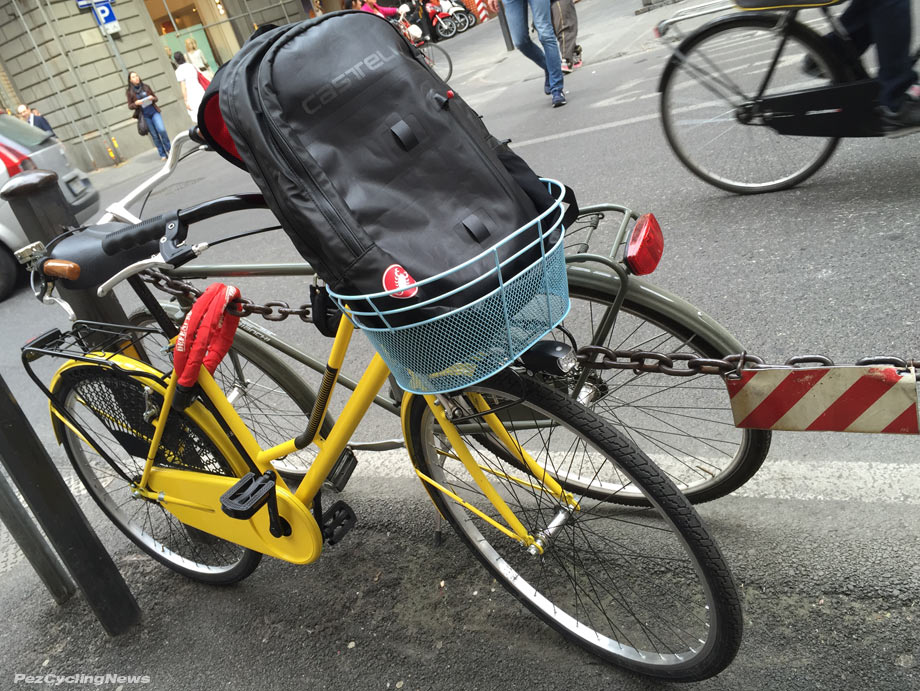 The sense of freedom was notable – and one of the few times I’ve recently recalled when I first learned to ride a two-wheeler as a kid. If I lived in a flat city – I’d be all over this bike-as-transportation gig.

But one wrong turn and I was in front of Florence’s gorgeous Duomo – a shimmering jewel of marble and granite, surrounded by a seething sea of the world’s touristic populace, and knickknack sellers (this year’s hot item is selfie sticks). I quickly channeled Snaglepuss to “exit… stage left. Stage right evennnnn…”

Not far away I found the excellent Bar Rivoire in the Piazza della Signora, where I took my first night’s negroni. It’s got a perfect view of a replica statue of David, and the late day sun reflecting off the various walls of the piazza cast a warm palette perfect for pre-dinner cocktails. The negroni was great, so good I had a second. 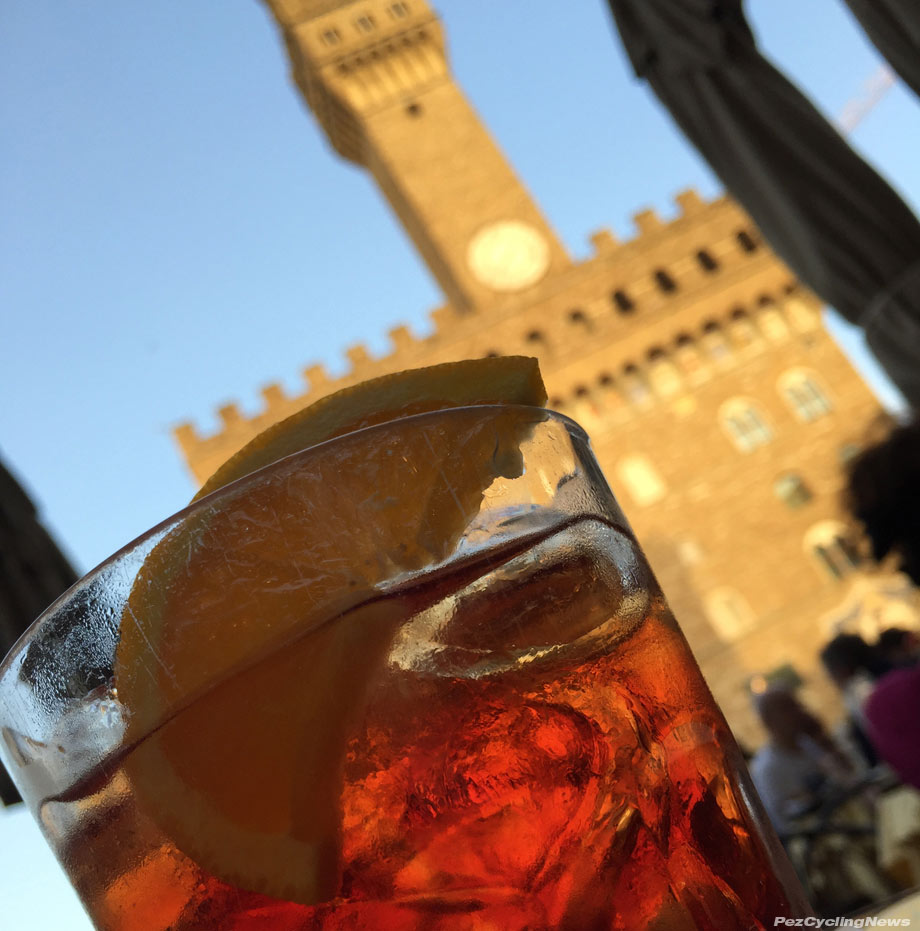 See that shadowy head to the right of my negroni…? Famous actress.

There are lots of English-speakers in Florence – as you’d expect in Italy’s 4th largest tourist city, and sitting at the next table over were three people speaking the Queen’s English… well mostly it was one lady doing the yapping while the male companion and another lady whose back was to me said barely a word. What was surprising, was my double and triple take when they got up to leave and I recognized the actress Helena Bonham-Carter as the lady who’s back was to me for at least a three quarters of my negronis.

Her facial features in real life are even more striking than on film, and there really is no one I’ve ever seen who looks like her… And her appearance was anything but discreet – there was a boho-hobo look to her fashions that reminded me of some of the characters she’s played.  But she was on her way out and I wasn’t about to interrupt even for a story to tell you guys…

But that’s the thing about the negroni – you never know where it’s gonna take you, or what adventure you might have because of it. And that, is quite possibly why it’s now got its own week.  So here’s to negronis, and to you dear PEZ-Fans – pour yourself a negroni tonight… you know I will.

Thanks for reading – Pez. 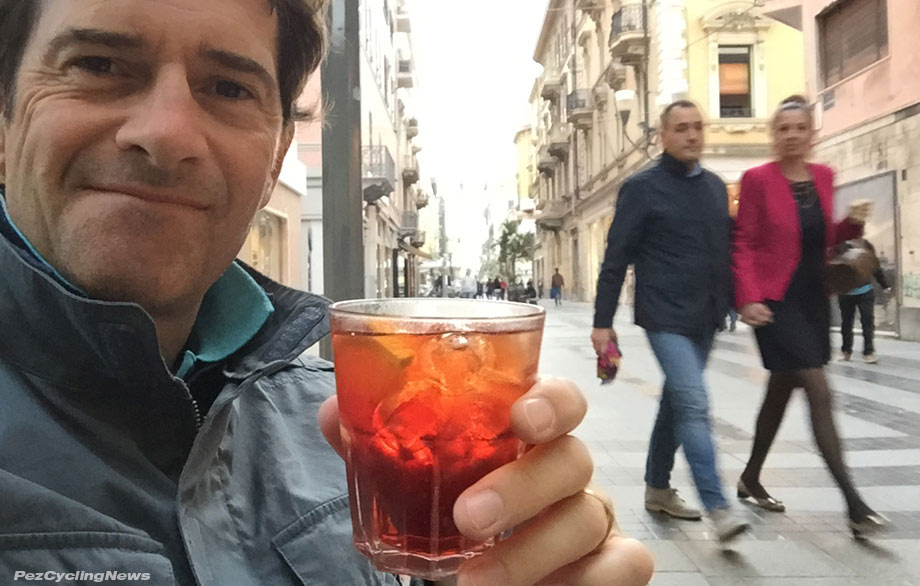