You might not believe this, but it doesn’t always rain on race day in Flanders. The Gent-Wevelgem racers rolled onto the course in mid-morning, and the sun suggested it was really spring. PEZ went cobble-deep with Velo Classic Tours to witness first-hand the craziness that makes the Belgian Classics… Classic.

Here’s how our day unfolded at the 2006 Gent-Wevelgem.

Velo Classic Tours had done a great job with a nice hotel in the centre of the beautiful city of Gent, a short hop from the race start in the town of Deinze, which was already in carnival mood when we hit town.

The garish and faintly disturbing clowns on ridiculous bikes added a lot of colour to proceedings. The rest of the colour came from the various factions of the Tom Boonen army who have proven by themselves that there IS plenty of character in Belgium.

While some of the VCT crew checked out the merchandise stalls and grabbed coffee, I briefly hooked up with Knut-Walter Baldersheim from the Kurt-Asle Arvesen Fanclub. We’d met at Liege last year, so I called over to wish his man luck, and it almost worked – the CSC rider was tenth.

You know you’re in Belgium when…

Next up, a quick roll over to the arrivals area where the team buses were rolling in. It might be midweek in Belgium, but bike fans are hardcore, so the whole length of fencing from there to the sign in – at least 700m – was fully occupied on both sides.

Tom Boonen shot past in seconds without glancing to the side. The guy is so insanely popular that he’d have been torn to bits by fans if he’d hesitated. Hincapie looked mellow and confident after his podium at Flanders.

The other super popular riders on the day were Leif Hoste and Leon Van Bon, stopping to chat and sign autographs. In fact, when Hoste stepped out of the Davitamon-Lotto bus, you’d have thought it was the Second Coming, such was the stampede.

Formalities dealt with at the start line, we barrelled into the buses and cruised to the foot of the Kemmelberg. A feat of van-handling brilliance by Peter and Lisa Easton meant the buses parked up just yards from the bottom of the climb, and were facing the right way for a jewel heist-style getaway after the race.

The Kemmelberg was already mobbed by 1.30pm, with the riders not due for another 90 minutes. Everyone was in jovial mood as we walked up to about 150 metres from the top.

You gotta arrive early on the Kemmelberg.

If you ever want a profitable sideline, come to Flanders and sell frites and beer for a while. Some of the guys (they know who they are) were accosted by a cafй owner in Wevelgem who hosted a post-race party which pretty much made her profits for the entire year!

Bike fans are a rare breed – some of the folks on the course had been there since early morning, so patience is definitely a virtue. You wait all day for a bike rider, then 190 of them hammer past and disappear. I can think of a lot of other sports which have much more fickle followings.

Here’s what we’ve been waiting for…

Race Time
The peloton were on us very suddenly – a couple of thousand digital cameras started firing to capture the action. I’m no different so I managed to grab a shot of Thor Hushovd leading the field up the Kemmelberg with Leif Hoste on his shoulder and Tommy B just behind. Maybe everyone’s experiences would be enhanced if we ditched the cameras and just watched the action? Race day should be about marvelling at the speed, handling skills and power of the riders. It doesn’t really look the same in a tiny LCD screen.

For the second assault on the hill, we headed over the top to check out the descent. These knuckleheads know how to handle a bike, thundering down the almost 1 in 4 slope without touching the brakes. 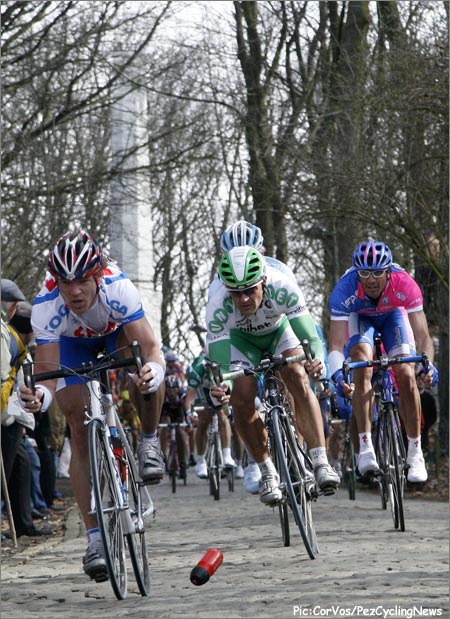 Flying down the Kemmelberg – no brakes allowed.

Fans turned around and started walking back up after a few moments, only for a frantic burst of shouts and whistles as Alessandro Ballan came motoring over the top a good 5 minutes plus behind, so he was obviously out for the training.

The top of the Kemmelberg has a couple of bars, but we managed to mingle with the locals in the beer tent to watch the end of the race. And this is roughly what it sounded like:

Peloton together – high-volume chattering about how it’s going to go and just where is Tommy B today.

Roesems is swallowed up – A Hell of a lot of booing and catcalling. These fans really wanted Pez favorite Bert to make it. 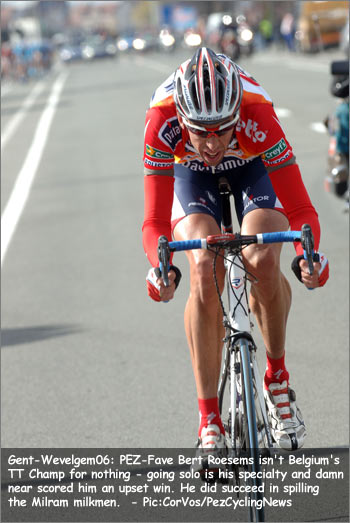 • Velo Classic Tours specialize in European cycling vacations, and their trips to Flanders, Roubaix and the Ardennes races (Amstel, Fleche, Leige) are experts at showing guests the races, riding the courses, and enjoying the local culture and cuisine. We’ll be travelling with VCT again for the 2007 Ardennes Classics, so stay tuned for our PEZ-Clusive reports.

For more information on this and other great tours to the best races in Europe, log on to www.VeloClassic.com or call 212.779.9599 for a 2007 color brochure and itineraries.
Like PEZ? Why not subscribe to our weekly newsletter to receive updates and reminders on what's cool in road cycling?