PEZ On The Prowl: PEZ Does Milano!

With a morning to spare before ‘The Lance Show,’ on Friday, we decided to PEZ Milano! Just a ten minute walk from our hotel there’s a place of cycling legend; the Vel Vigorelli. The Vigorelli is part of cycling’s rich history, world hour records were set here and the Tour of Lombardy used to finish on it’s hallowed boards; until Milano’s traffic went super nova.

Snuggled under one of the bankings of the Vigorelli is another piece of cycling history. In 2009, it’s hard to name just one frame manufacturer who is the world number one – Cannondale? Cervelo? Colnago? And that’s just those starting with the letter C. (Charles will email me to tell me it’s Parlee, no doubt.) 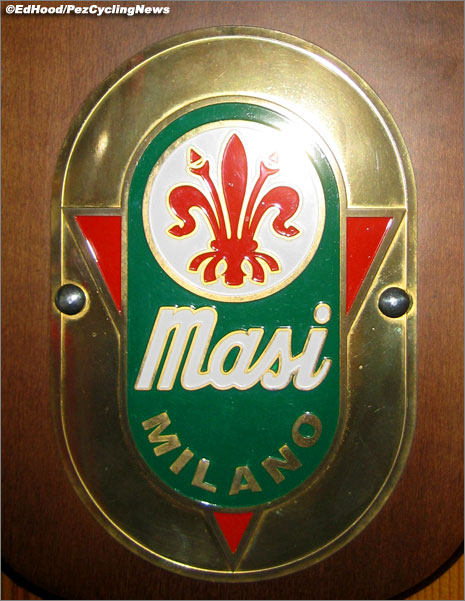 But in the 60’s there was just one undisputed world leader for racing bicycle frame manufacture – Masi of Milano. Eddy Merckx rode them, and so did many of the world’s other top pros, but with their sponsor’s decals applied. Ferdi Bracke, Walter Godefroot, Rik Van Looy, Tommy Simpson, Barry Hoban and many other pros laid down their hard earned cash to buy a Masi, rather than ride the machine that their sponsors provided them with. 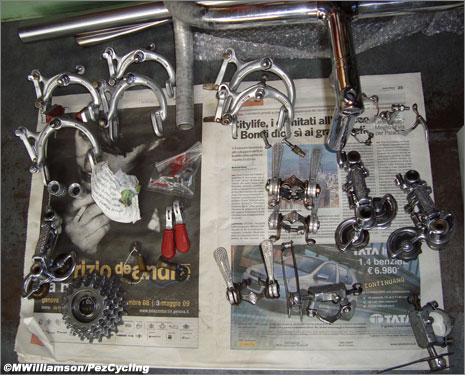 And if you know how pros think about money, then you’ll realise what a huge deal that really was.

The Masi shop is still there and Sr. Alberto Masi, ensures that the dynasty lives on. 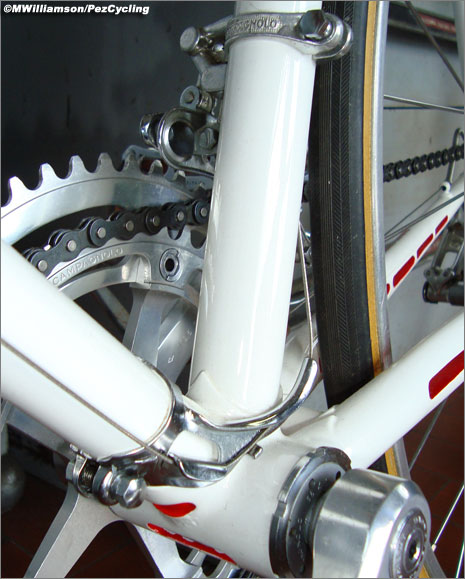 How they used to do it back in the old days.

A lot of Masi’s business now is renovation and restoration of historic bikes for collectors in the US, Britain, and Japan. 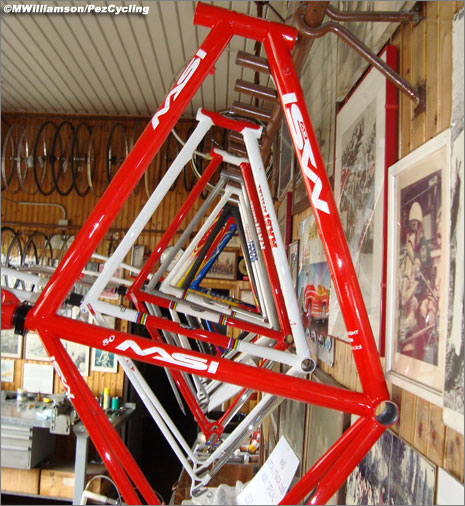 A few Masis for you.

Current projects include machines belonging to Fiorenze Magne and Rik Van Looy; bare metal re sprays are complemented by restoration of original components which are chromed or polished back to a ‘like new’ state. 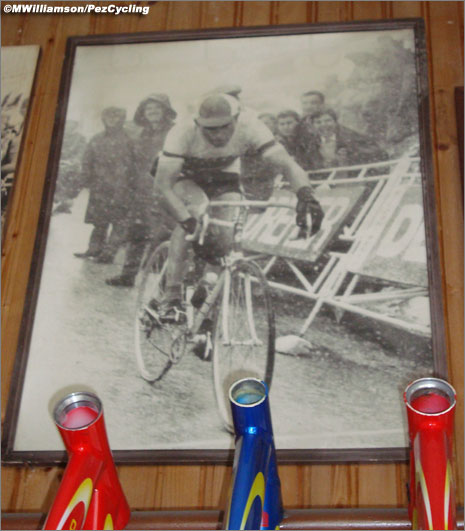 The man himself: Eddy Merckx.

Pride of place in the workshop is an exact replica of the 1968 Faema liveried Masi which Eddy Merckx rode to glory in the Giro that year. 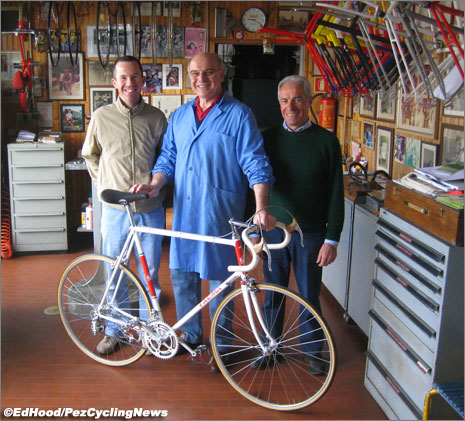 The touch of an artisan is evident on the machine; original in every respect. 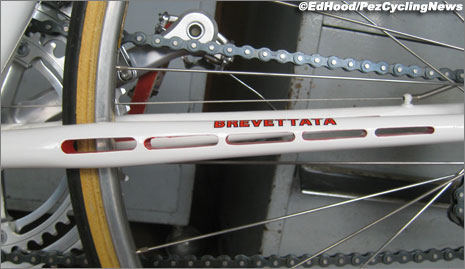 Masi isn’t a carbon fan; “Carbonio, c’est la mode!” (we had to communicate in French) to a man like Alberto, ‘fashion’ is a swear word – he trades in class and style. 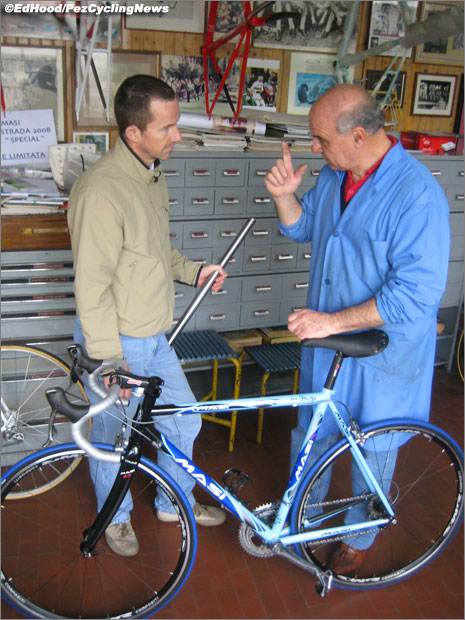 He’s a steel man through and through and argues that the latest oversize stainless tubes – which come from the US and French aero industries – allow him to build the finest frames to be had. 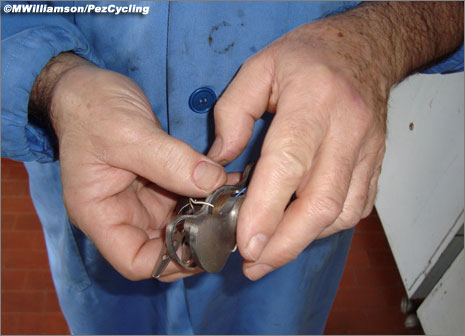 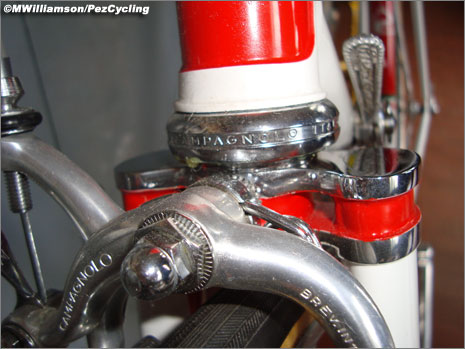 He showed us samples of the tubes and let us feel the weight of a complete machine – it was light and looked the part.

I think that even he would concede that the days of “skinny” steel are past, however. 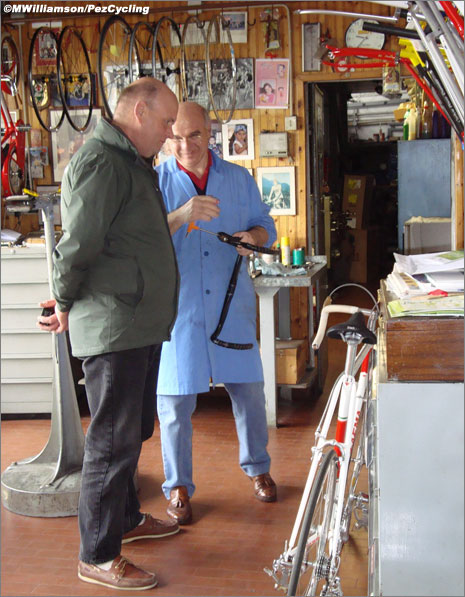 He explained that a crash with a carbon frame spells the end of it; but with steel, the damaged tube can be removed and a new one fitted. 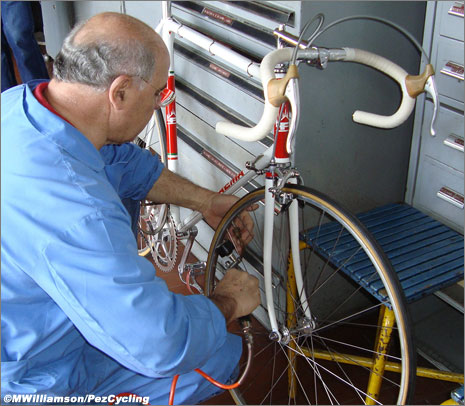 We asked him about the structure which forms the roof of his workshop – the Vigorelli; he explained, with a shake of the head, that it was in bad shape and the in-field is used for American football. 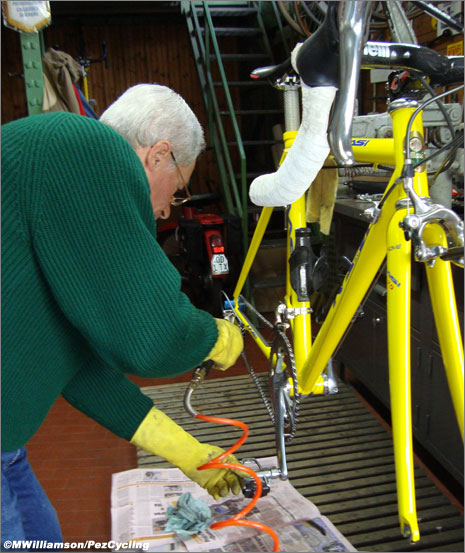 His choice of favourite rider? British sprint star of the 40’s and 50’s, Reg Harris – my dad would have agreed with that – and a picture of Reg on a Raleigh, “the all steel bicycle,” graces the Masi walls. 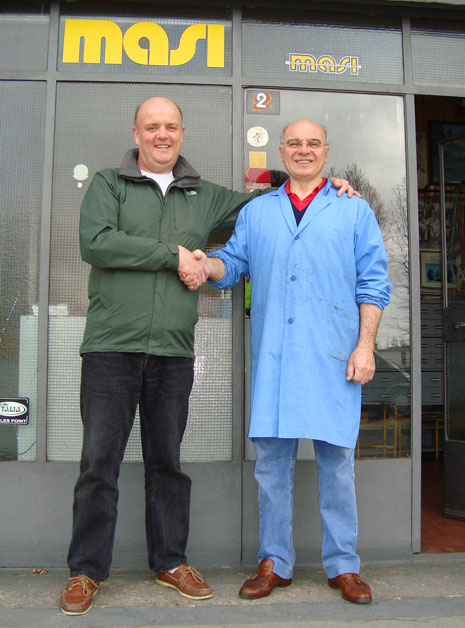 We said our ‘farewells’ and decided to do an external lap of the Vigorelli and just maybe catch a glimpse of those historic boards.

A death defying climb up one of the wrought iron entrance gates got us a glimpse – the boards looked black and the Gridiron goal posts completely out of place. 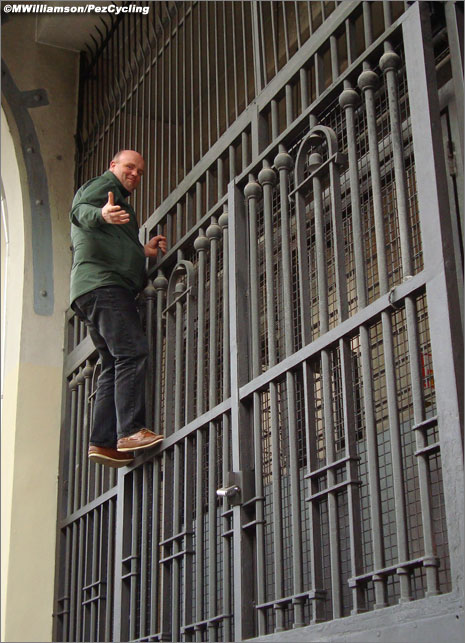 Pictures taken and a little sad at the fact that the Vigorelli’s entrances are now tramps’ bed spots for the night, we headed off in search of some of that Milanese style we all hear so much about. 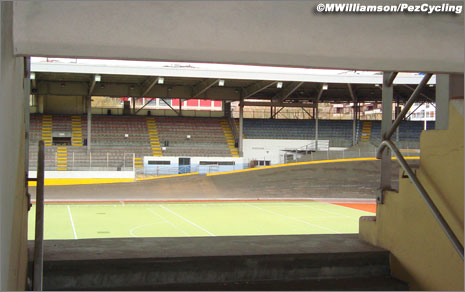 But first, Martin had to be introduced to grappa – despite the blue sky, it was cold in Milano and nothing warms like a grappa. 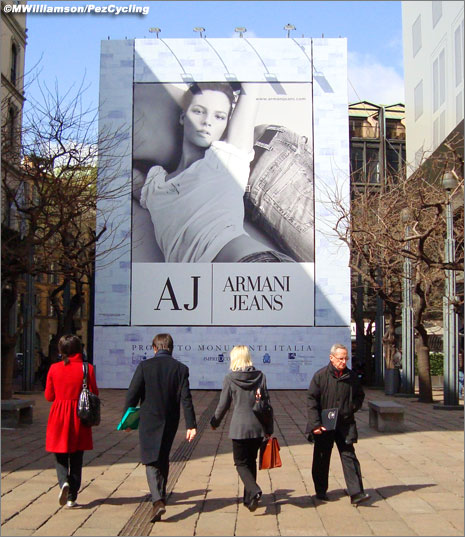 If Flanders as heartland for bike racing has an equivalent among ‘fashionistas,’ then it’s Milano’s Via Montenapoleone. Versace, Gucci, Valentino, Rolex, Todd, all the names are here and so are the beautiful people. 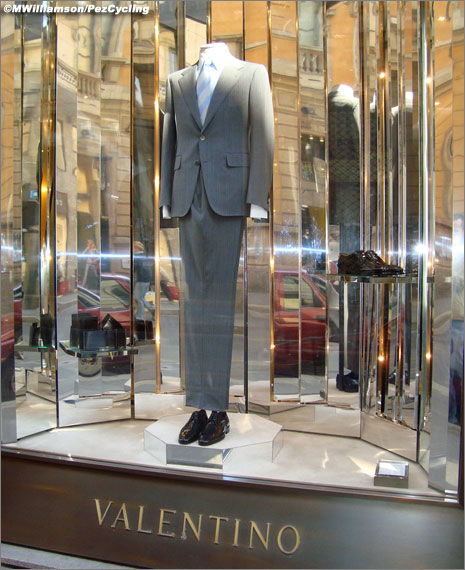 Their watering hole is Cafй Cova, fortunately a cappuccino will only cost you euro 1.60 – if you stand at the bar – the price escalates sharply however, if you sit down and have one of the immaculate waiters serve you. Your espresso will arrive with a little paper cap over it, though. Pez risked eviction by grabbing a shot; “Mister! Mister!” said the barman, wagging a remonstrative finger at us and pointing at the ‘no photography’ sign – we looked suitably reprimanded and were allowed to finish our coffees. 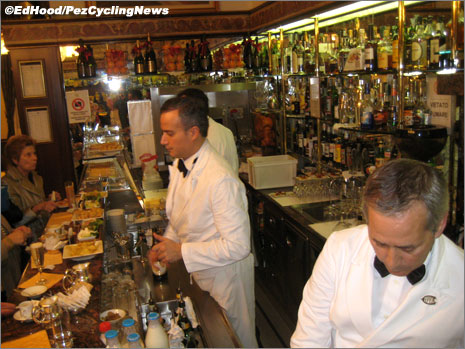 Just up the road is the world’s most famous opera house, La Scala. From the outside it looks rather plain, but inside it’s spectacular. Tickets for modern productions are easy to get; but if it’s a classic, with the big names then be prepared to have your finger poised over the send button on your computer on the stroke of midnight, the day before tickets go on sale. Productions sell out in hours and agencies operate a “think of a number and double it,” pricing policy on tickets.

Across the piazza from La Scala is the fabulous covered canyon of luxury that it is the Gallerias Vittorio Emanuele shopping arcade. A spectacular glass, barrel vaulted roof towers above you as you tread the marble floor with sandstone, glass, mahogany, brass and expensive shops all around you. Yes, there is a McDonald’s, but ‘it’s not a McDonald’s as we know it, Jim!’ it has to fit perfectly into it’s surroundings. 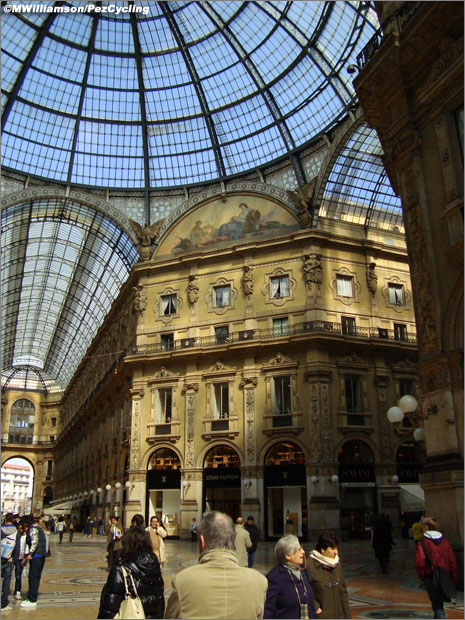 As you exit the Gallerias on the south side, there’s another of Milano’s legendary grand cafйs – Zucca. But again, if you stand at the bar, the prices aren’t savage. The cappuccino here is divine and the grappa smooth. But really you should have long, slicked back hair, a linen jacket, stubble, a scarf and a small dog – to which you can throw tit bits; much to the distaste of the super-cool waiters. 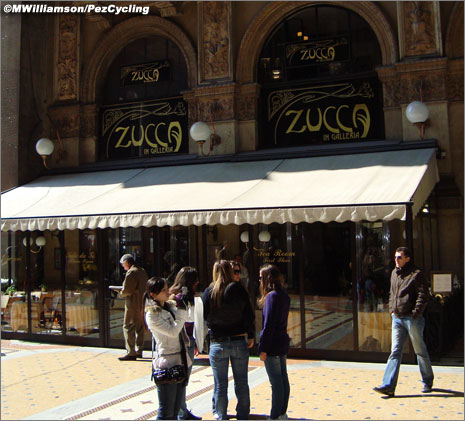 Martin said I’d had enough grappa, so it was time to walk out Zucca’s front door to view the creation that is the Duomo, the world’s largest Gothic Cathedral. 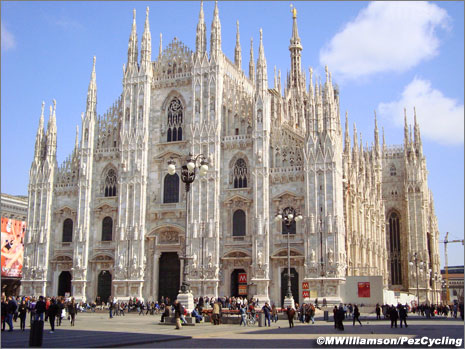 Free of scaffold for the first time in ages, it’s like a huge freshly iced wedding cake, gleaming in the March sun. It took centuries to build, with some of the work done as recently as the 1950’s. 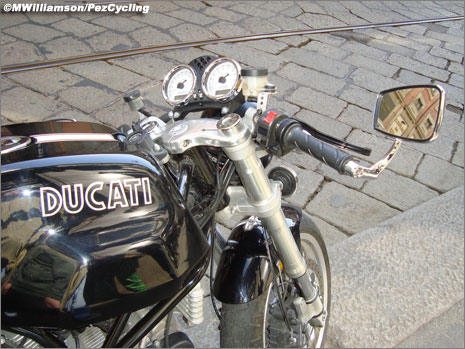 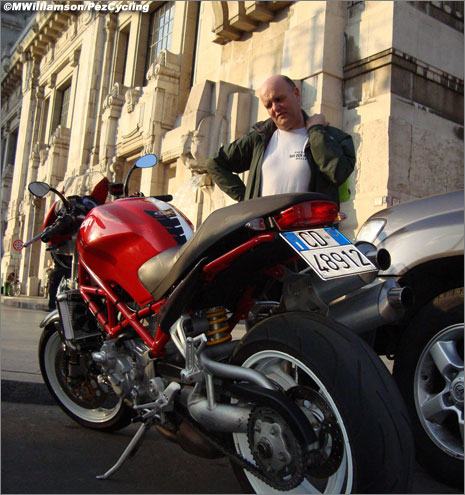 Further north are another two of the city’s landmark buildings. The Pirelli Tower is 60’s architecture at it’s best; sleek, elegant, spectacular – or horrific, depending upon your point of view. Personally, I love it; it now houses the Lombardy Regional Government offices. 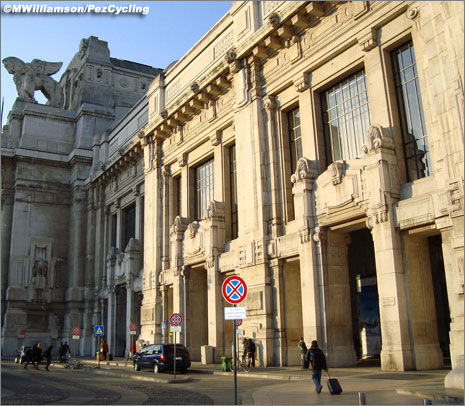 Across the piazza is Central Station; courtesy of Benito Mussolini. It’s a classic example of Fascist architecture and on a huge scale. The critics hate it for it’s “monumentalism and lack of human scale,” but I kinda like it, if truth be told. 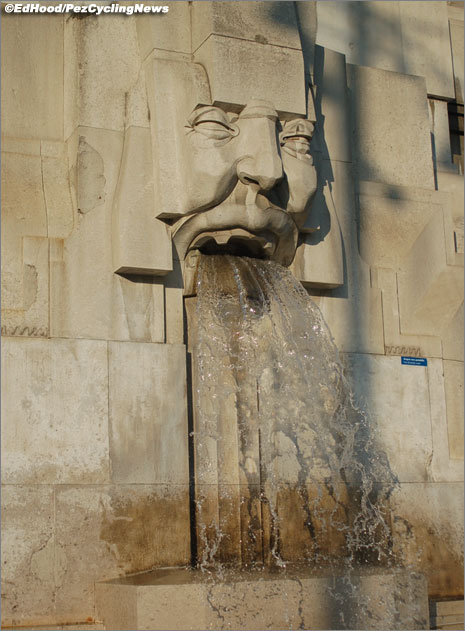 Toolbox: Putting Failure in its Place