PEZ On The Road With BMC

The pre-Christmas training camp/team presentation/media day in Spain is getting very popular. This will be my third in a couple of weeks. BMC know how to look after you though, top hotel, top food and top riders to interview. An all-round top day on the road.

I know I’ve said it before, but it’s always a pleasure to receive an invite to spend the day with a ProTour team. This time it was from BMC, they always take over the Marriott La Sella Golf Resort near the coastal town of Denia. To say it’s a nice hotel would be doing it a big disservice; the added bonus was the lunch invite. Now if you read about my Katusha Presentation day you will remember the bottomless pit of Russian caviar, well at BMC it was a proper sit-down feed, but I’m getting ahead of myself. 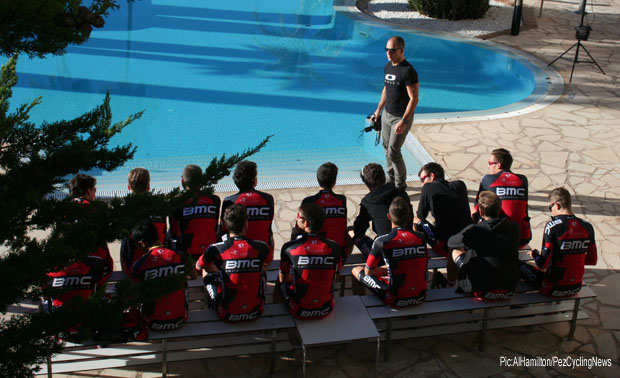 The plan was that I was to arrive at the hotel for the ride to leave at 10:45, but with all these things its better to turn up early to see what’s going on. All the riders were having their 2015 team photos done by Tim De Waele, he seem to be doing all the team pic’s this year. As usual I couldn’t take any photos due to the new riders still being under contract to their previous teams.

There was one rider in the team shot that was unrecognizable, stood next to team President/General Manager Jim Ochowicz, a guy with a beard. A new, undisclosed signing, a young star in the making? No, he was standing in the position where Cadel Evans will go in the shot later. 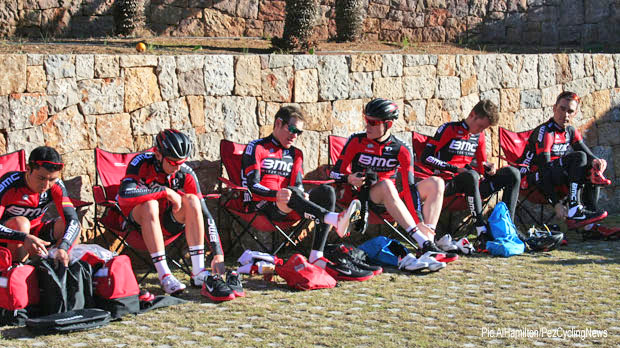 Time to get ready

Shots done and it was time to get ready for the ride, of course the new riders had to change back into their 2014 kit. I had a chance to congratulate Manuel Quinziato to his recent engagement to Patricia, who I used to see regularly as a promotional girl at the Vuelta and she has also been a regular ‘Daily Distraction’ over the years. The wedding will be in Santiago de Compostela, where this years Vuelta finished with a time trial in heavy rain. Good luck to them both and lets hope the weather is better for the big day. 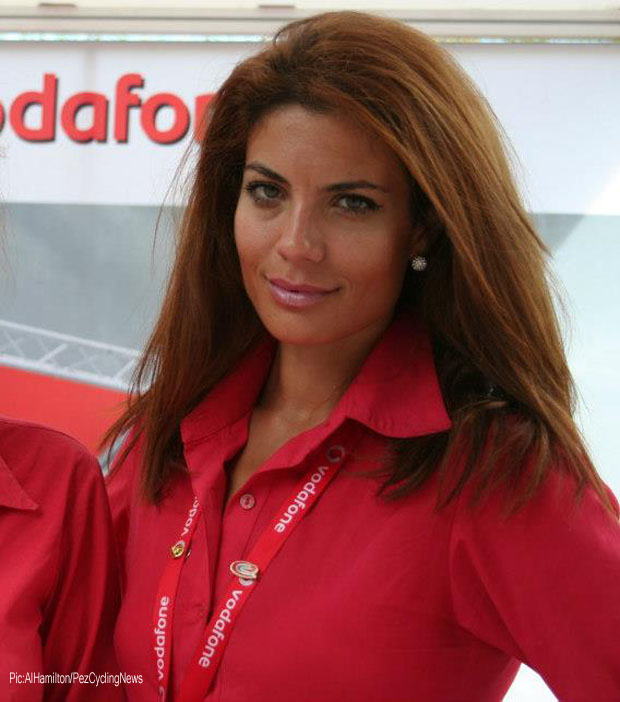 Patricia, soon to be Mrs. Quinziato

The ride was being split into three groups for a couple of reasons, it would give the photographers more chances and not annoy too many drivers on the narrow roads. We don’t want a repeat of a previous occasion (with a different team) that led to police intervention. 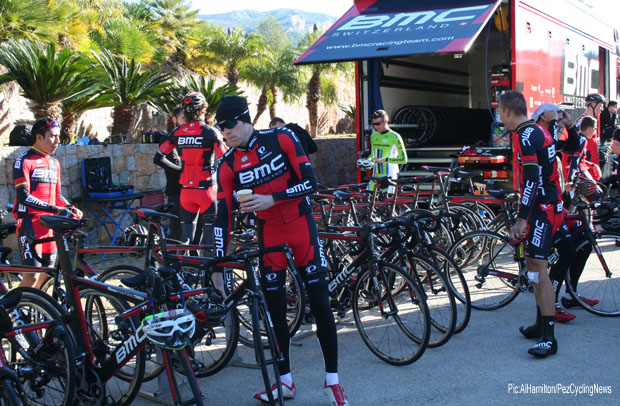 There was a lot of interest in BMC’s new signing from Luxembourg; Jempy Drucker, a TV crew had come just to film him. Drucker was second in the Skoda Tour de Luxembourg and fourth in the Dwars door Vlaanderen. Jim Ochowicz said of the 27 year old: “Jempy has a nice background in classics-style racing in the spring and summer. On numerous occasions, he has demonstrated his ability to time trial and deliver in the faster races a solid performances and consistent results.” Drucker said of his future: “I want to progress as a rider. My main races are the classics, so I hope to be able to play a big role in them and help the team get nice results or a win.” 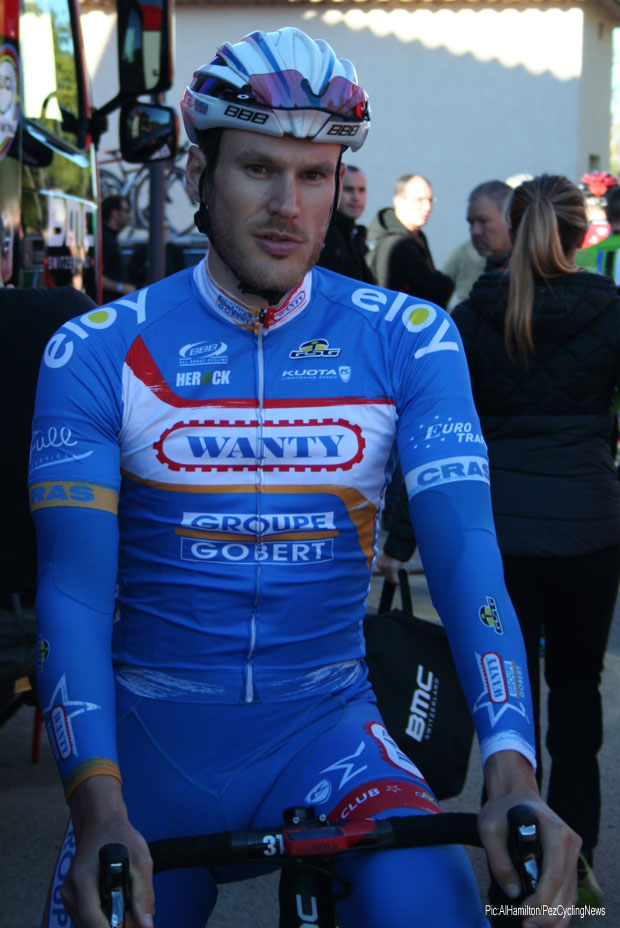 Everyone was keen to get on the road, but there were the usual stragglers and last minute adjustments. For the photographers there was an 8-seater people carrier at our disposal, but of course there were 9 or maybe 10 people. This was the moment to hang back and get a seat in a much more comfortable team car. 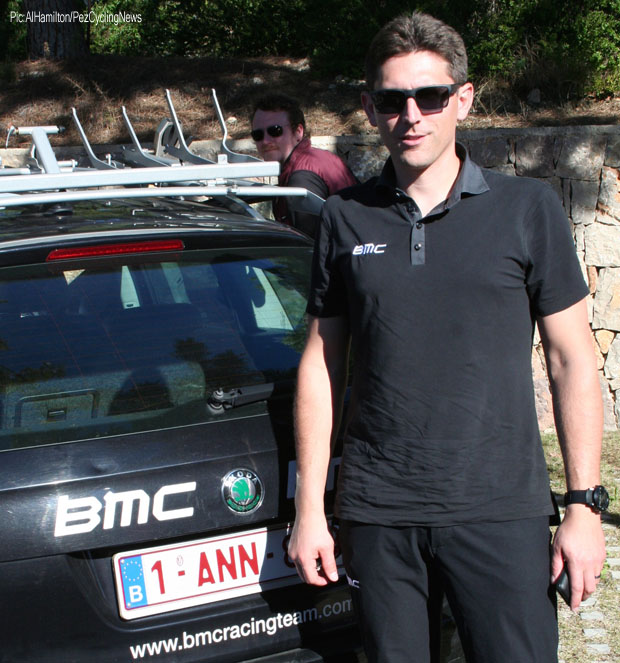 The plan worked and my place in a leather seated Skoda Superb was secured and with the advantage of having ex-US Pro Jackson Stewart behind the wheel. Jackson rode for BMC for the last three years of his nine-year pro career and after managing the USA Cycling women’s national development program he joined BMC as a sports director. 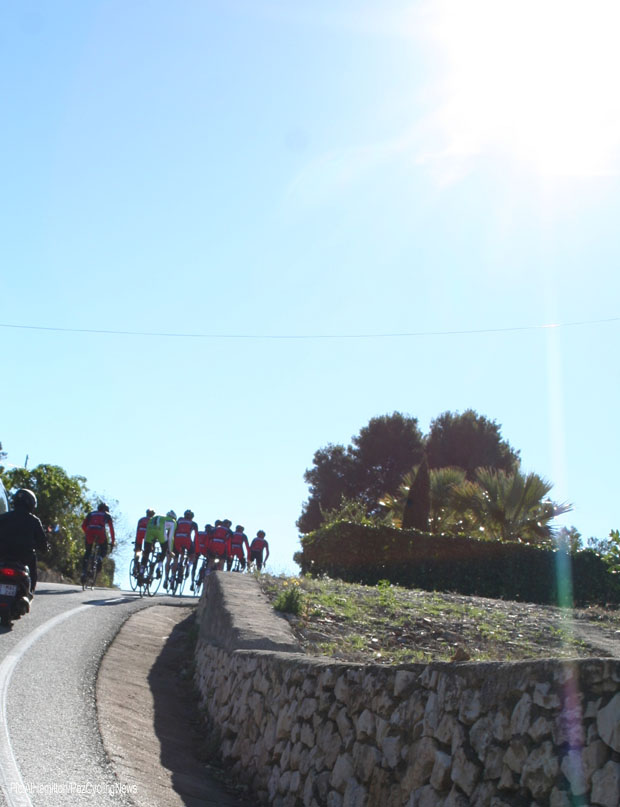 The chat in the car covered many subjects, from the price of houses to the World monetary crisis. The deepest discussions came down to altitude training and hyperbaric tents to whether disk brakes would ever be seen on the road in the pro peloton. 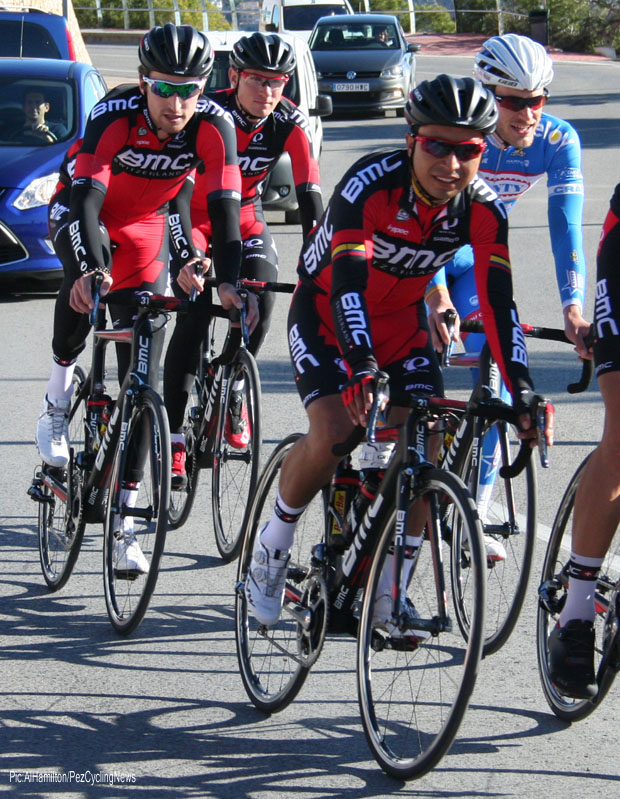 All at BMC seem happy, even Taylor Phinney

The vote in the car was against all of them; altitude training doesn’t suit everyone and you have to spend at least 10 days up a mountain and the medical guys are still not convinced of the advantage. As to the hyperbaric tents, well how do you explain to your wife that you will be sleeping in it every night or do you buy a double one. The fact that they are illegal in some countries, so what is the point. 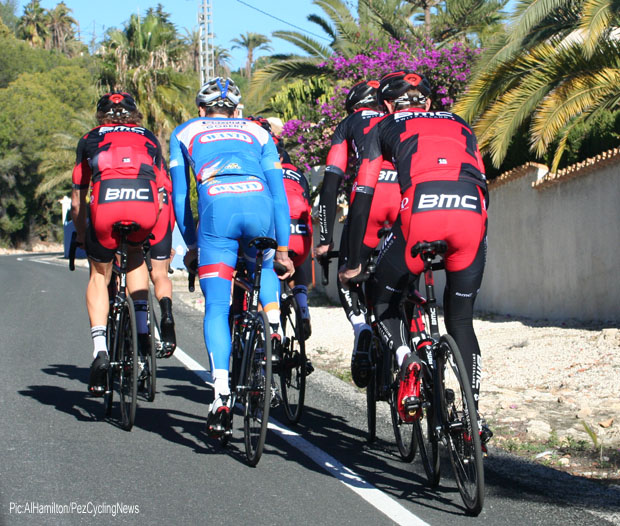 It’s not all beach

Disk brakes also didn’t get a vote of confidence. Maybe they are stronger, but are the tires up to the job and anyway you can lock up your wheels perfectly well with all the present brake systems. 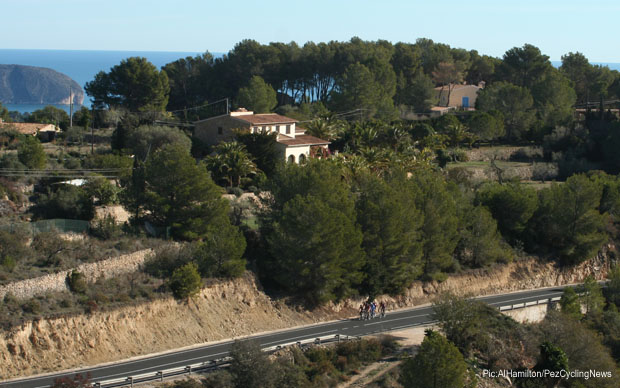 The climb from the coast

While all this talk was going on we also had a look at the riders. It was an easy ride down to the coast and then back up a popular climb to the main road back to Denia and lunch. 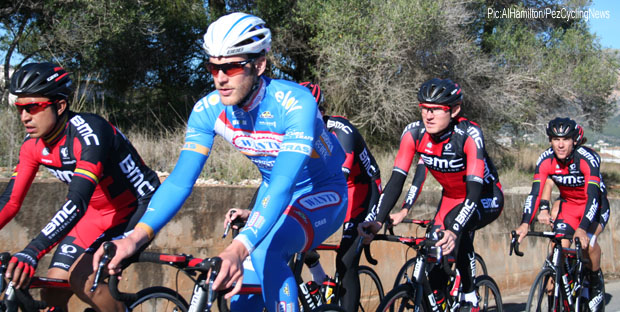 Mixing it with the starts

The team chefs, Walter Grözinger and Massimo Carolo had prepared lunch. First there was hors d’oeuvres of mixed hams and other meats with a selection of salads, cheeses and other vegetables. The main course was a choice of two pasta dishes; the one with Swiss cheese was a particular favorite. For desert there was an apple tart and a fruit flan, but the apple had small pieces of chocolate amongst the apple, which was a pleasant surprise. All this was washed down with Aureto, the red wine from the team boss, Andy Rhis’s vineyard in Provence, La Coquillade. The wine was the topping on the cake, so to speak, but more than a glass would have put the rest of the day in jeopardy. 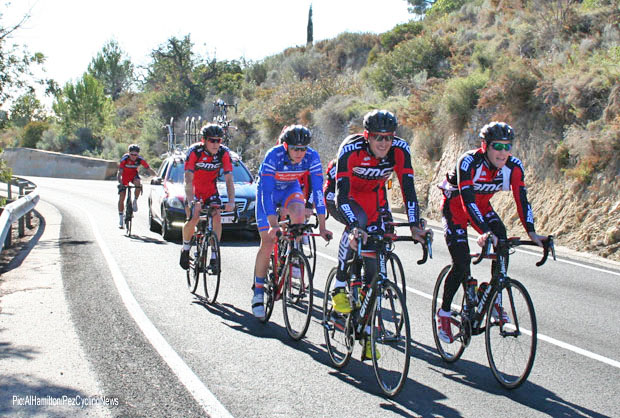 The top of the climb

During the lunch there was the special announcement that on February the 8th at the Velodrome Suisse in Grenchen, Switzerland, Rohan Dennis will try to better the current hour record of 51.852 kilometers by Matthias Brändle. Dennis said he is a bit nervous, but very much up to the challenge. “When I look at my experience on the track and the numbers I have been doing on the track and on the road, it is within reach,” he said. “As long as I don’t get too excited at the start and control my nerves, the pacing will take care of itself.” Allan Peiper said planning for the attempt began shortly after Dennis helped win the world team time trial. “We have been working on it, taking all the circumstances into consideration,” he said. “This is something Rohan really wants to do. Part of our development for him is to support him in the things he wants to achieve. So that is the main reason we are doing it.” 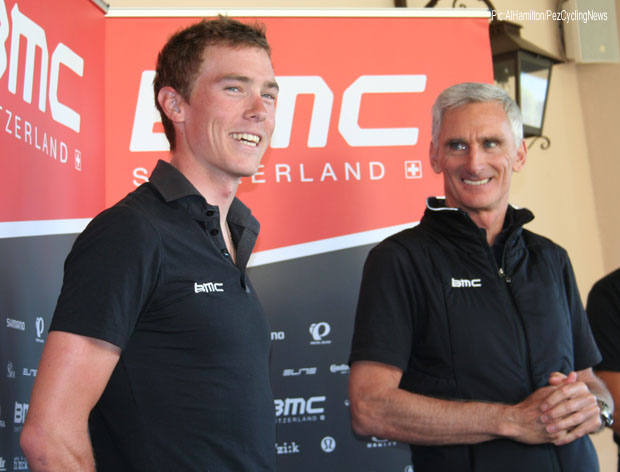 A nice siesta would have gone well, but there were rider interviews to handle. It was great to see Andrew Hood of VeloNews, another journalist living in Spain. With Hoody in the room you know the talk will flow. It still amazes me that you can be in a room with about half a dozen journalist’s interviewing a rider and it comes down to two or three people asking the questions, but the journalist from a certain website says nothing but has all the interview published before anyone else. 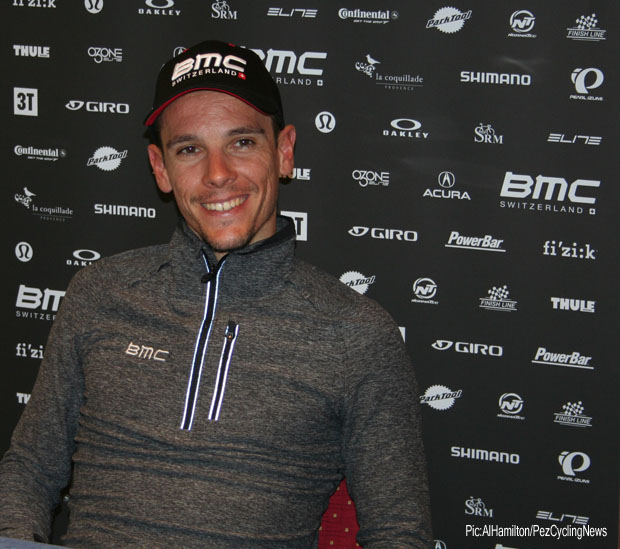 Greg Van Avermaet, Philippe Gilbert, Taylor Phinney, Tejay van Garderen, Peter Stetina, Brent Bookwalter and Sports Manager Allan Peiper all got the PEZ treatment. You will be able to read them in the new year. 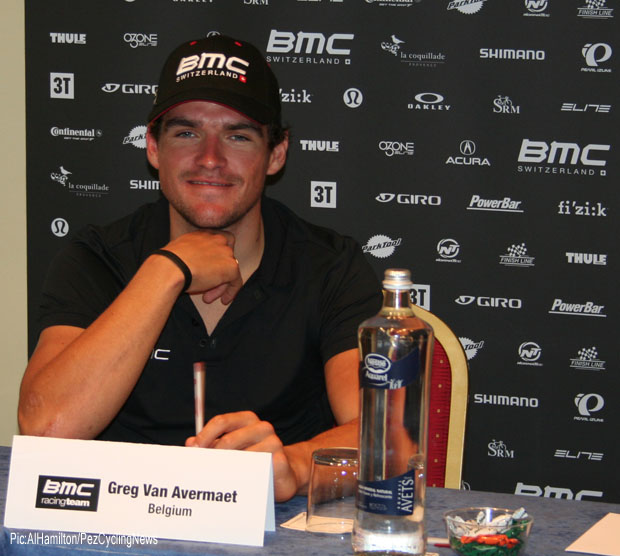 So time to go home and to rescue the journalist from Cycling Weekly who couldn’t get to the airport for his flight home.

The video of the day by BMC:

Thanks to Georges Lüchinger and Sean Weide for all their help.