PEZ On The Road With Garmin-Sharp!

After the near disaster of the day with the Omega Pharma – Quick-Step team I was hoping that my day visiting the Garmin-Sharp team would go without a hitch but what do they say about best laid plans? First it was announced that my intended interviwee David Millar wasn’t going to be there and then secondly there was to be no seat for me in the team car. What could happen next?

Another day, another team to visit, and this time it’s the turn of Garmin-Sharp. There really is a lot of teams in this part of Spain this year with apart from the ones I’ve already seen there is BMC which is still a possibility and I’ve spotted Cofidis, Astana, Sojasun, Euskaltel-Euskadi, CCC Polsat, Top Sport Vlaanderen and some Orica-GreenEdge riders, not to mention Lotto Belisol a bit further north and Blanco south down the coast. Vacansoleil-DCM has also returned but more about them later. 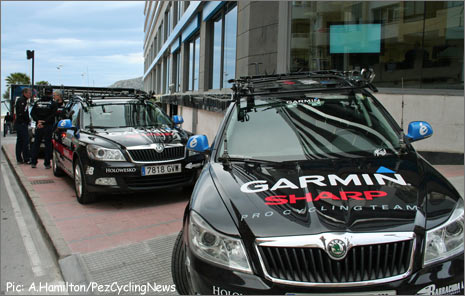 No parking space, use the pavement!

It was a cold Wednesday morning that greeted the team at their training base in Calpe on the Mediterranean & this year they are sharing the hotel Sol y Mar with Topsport Vlaanderen-Baloise, which moved in when Omega Pharma – Quick-Step moved out. Outside the hotel there was the usual chaos of trucks and cars, which was not helped by an illegally parked Seat – it was soon moved, but not by the owner. 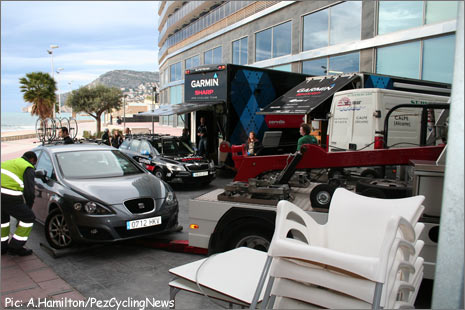 That was a problem easy solved.

The Sol y Mar hotel has been popular with teams since the legionaries scare at the Diamante down the road but it doesn’t have as much room for trucks and buses. Luckily the more modest ProConti Belgian team Topsport only had one small truck and one car whereas Garmin had two big trucks and four cars, the same as Omega Pharma. 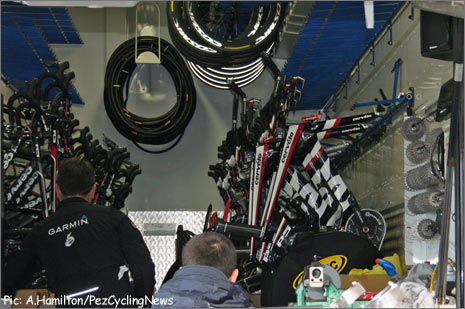 That lot must be worth a bit.

The trucks were all loaded up with spare bikes and the Cervйlo P5 time trial bikes, that truck must have a good lock on the door. The riders had been mixing their riding between the road and TT bikes but most days the training was made up of just hours on the bike under the belt. 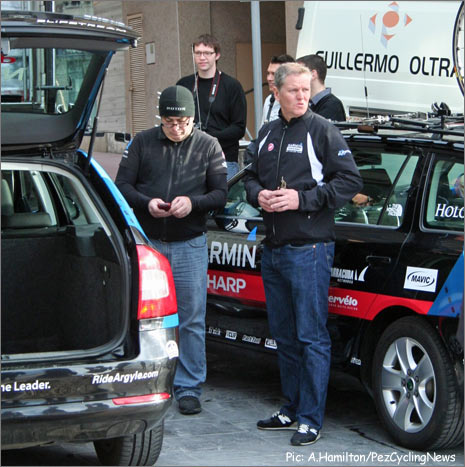 First member of the teams’ management down to sort out the day was Johnny Weltz. After he retired from racing he was the manager at US Postal before being replaced by Johan Bruyneel when Armstrong returned after his cancer. The Dane is quite at ease in Spain as most of his racing career was spent with Spanish teams; ONCE and Artiach, plus Fagor which was a French registered team with a Spanish sponsor. 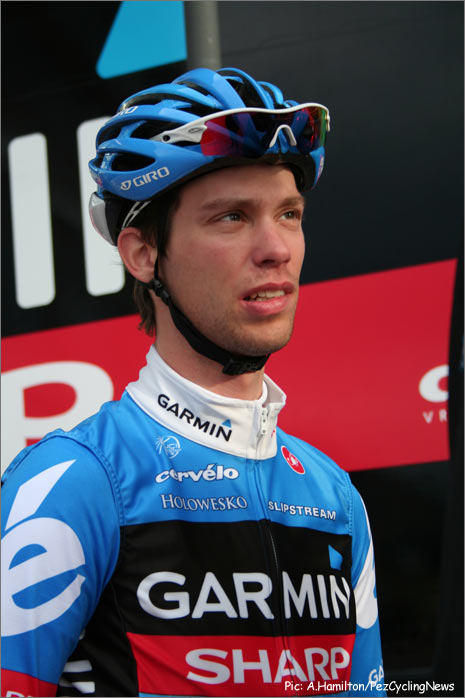 First rider at the trucks was Michel Kreder. He and younger brother Raymond have been connected with the team since 2010, Michael as a full professional and Raymond with the development Felt-Holowesko team, a stagiare in 2010 and a full contract in 2012. Together they took the 2012 Dutch Madison championships on the track but both also have good road palmarйs for 25 and 23 year olds. 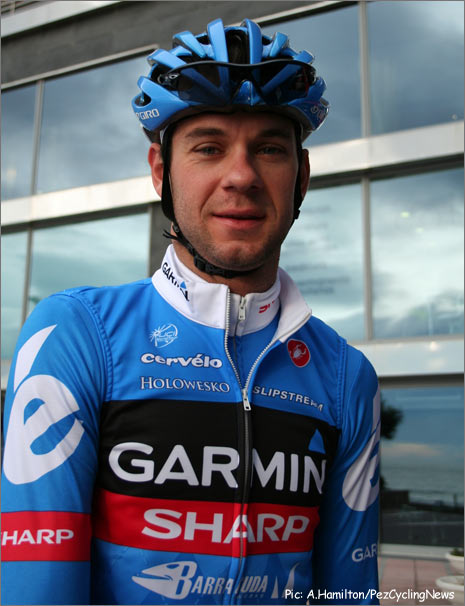 Amongst the others to arrive was Martijn Maaskant, he always has time for a chat, his girlfriend, Lien, has been a “Daily Distraction” in the past and we interviewed her because she has been a podium girl at the Gent Six and at some of the Northern Classics. Martijn is a man for the Classics, I said I thought it was cold, Martijn laughed; “the rest of Europe is cold, this is good, anyway I don’t like it too hot for training, this is perfect.” 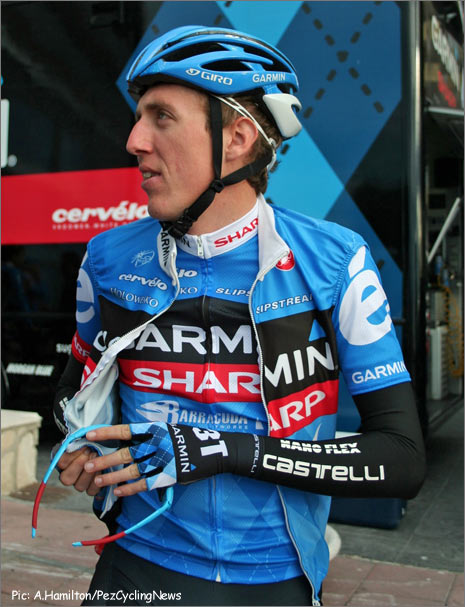 So that’s how you clean Oakley glasses.

Dan Martin was ready to go, although I don’t remember reading in the cleaning instructions that you clean your Oakleys’ with your finger and the inside of a jersey; I guess he has more than one pair. Dan suffers from hay fever allergies, how is he doing? “yea, OK, last year was much better, but I felt it a little yesterday.” 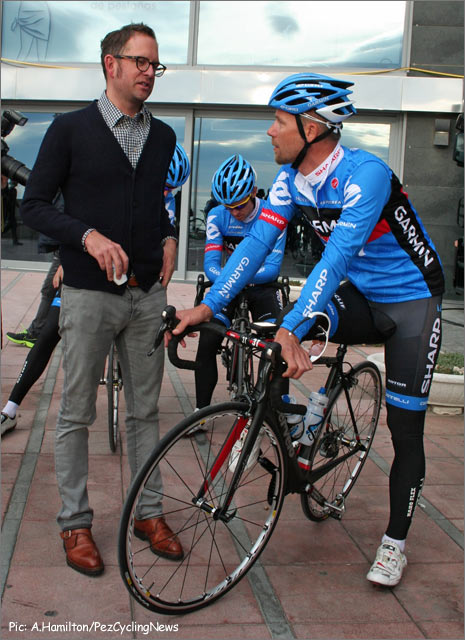 Of course the boss; Jonathan Vaughters was there to oversee things, still looking smart, but no sign of any paisley pattern or tweed and the sideburns are not quite as ebullient as previously. I was still feeling the cold as the sun was still not that high in the sky yet & Jonathan had just come here from the unveiling of the new Giro d’Italia jerseys for next year in Milano, “the weather here is great compared to the north of Italy.” Can’t argue with that. 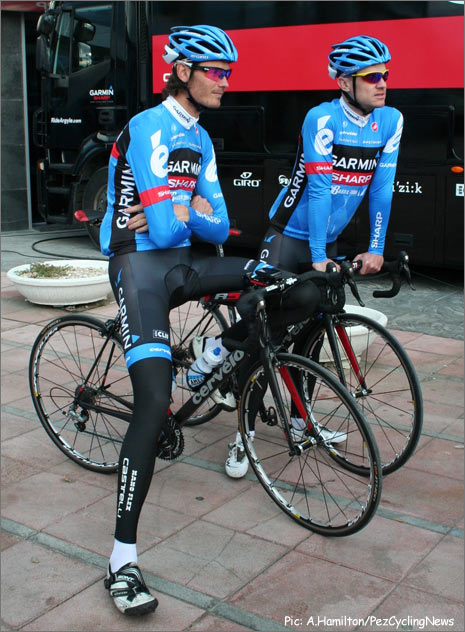 Johan Vansummeren and Nick Nuyens were patiently waiting for the off, the Paris-Roubaix and Tour of Flanders winners had seen it all before, just another day at the office. I did manage to interview them both later, so stay tuned to PEZ for that. 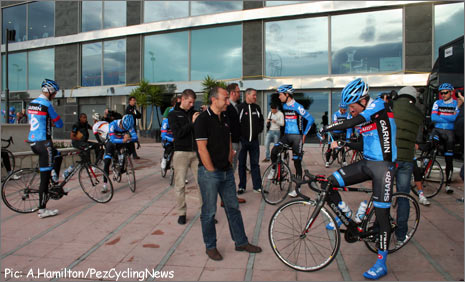 The fifteen riders were ready to go, there should have been sixteen on this training camp, but David Millar’s wife was unwell so he could not attend. I had asked to catch-up with David as a lot has happened in the sport of cycling since last year when we spoke. 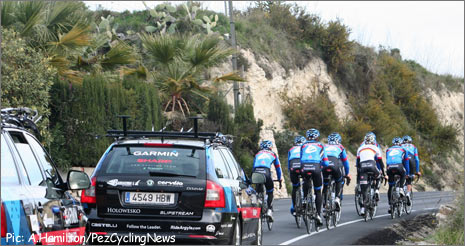 A nice roll out up the coast.

So no David Millar interview, but the good news was that there was a seat for me in a team car to follow the riders and get some good shots. The ride headed up the coast from Calpe towards Moraira and Javea, all well known routes to pro riders, 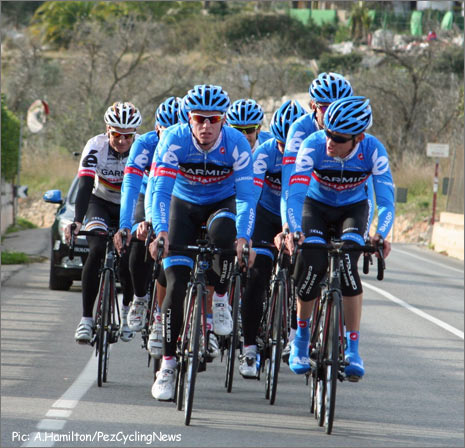 From there, there was a small climb around the mountain of Montgу before dropping down to Denia on the coast again. 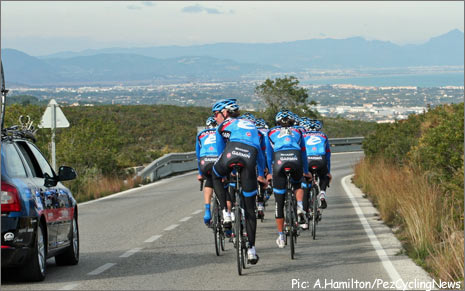 That’s Denia and the Mediterranean in the distance.

From the flat coast road we headed inland towards the town of Pego and the climb of the Vall d’Ebo. There were four team cars following, going ahead to stop for photographs and in one guys case; hanging out the back of a car. We were taking bets on when he would fall out…but he didn’t. 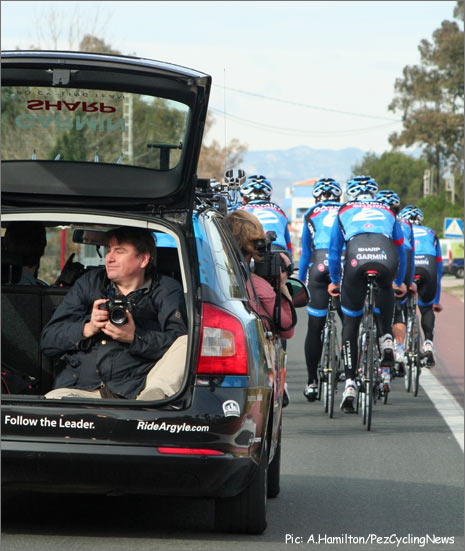 Will he fall out? 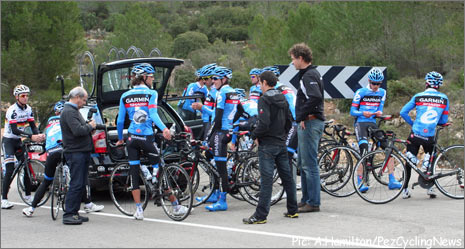 The plan had been to climb the famous Col d’Rates from Parcent, but there had been a block head wind up the valley, so a detour was added up a side valley towards Castell de Castells with a stop for new drink bottles and a break for nature! 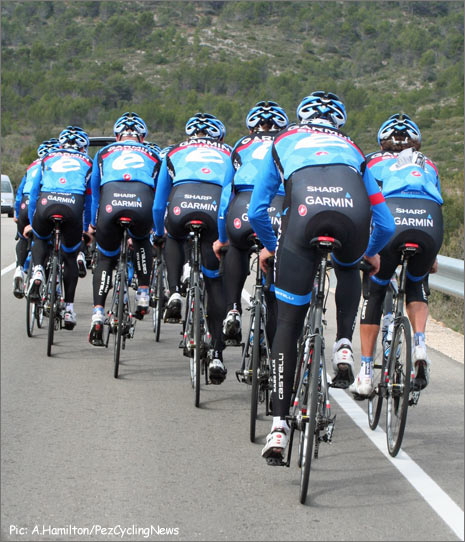 An echelon into the wind.

It always good to watch professional riders automatically form an echelon in to the head/cross wind, nothing was said and then it formed. 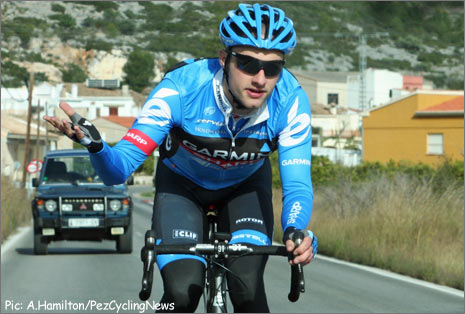 Unlucky for Jacob Rathe, a puncture as they rode into the head wind, so it was onto the bumper of the car and he was soon back in the fold. 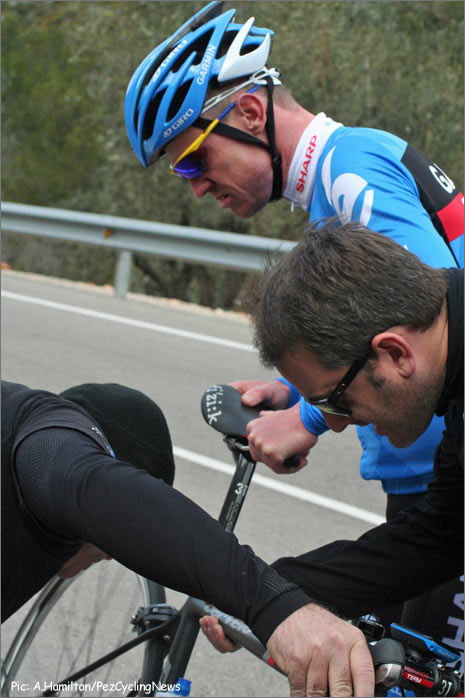 Nick Nuyens is new to Garmin-Sharp and was riding the wheels he had been using in Belgium with its inclement weather, so it was no surprise that his freewheel started to make a funny noise. A new wheel now and the cassette body would be replaced this afternoon. 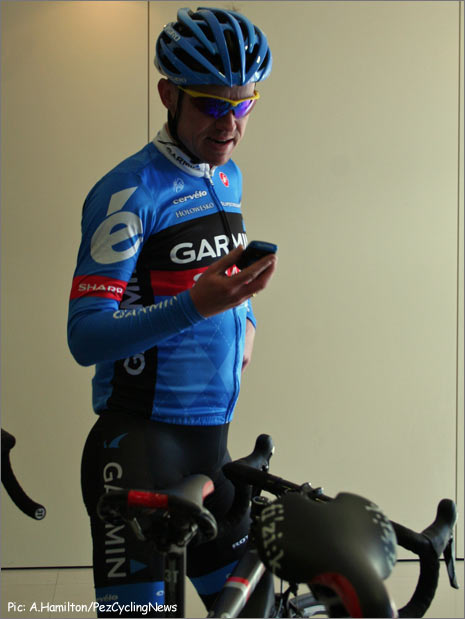 Back to the hotel and just like all bike riders everyone checked the distance, it was about 140 kilometres, not bad for a rest day. 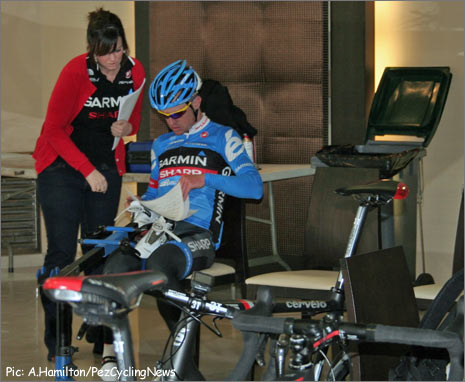 Marya, the team’s Director of Communications, was handing out the list of appointments for press interviews: Nick Nuyens 2:30 with PezCyclingNews, or was it 3:30? It didn’t matter as Roubaix winner Johan Vansummeren was free to fill in the gap. You can read the interviews as soon as I’ve typed them. 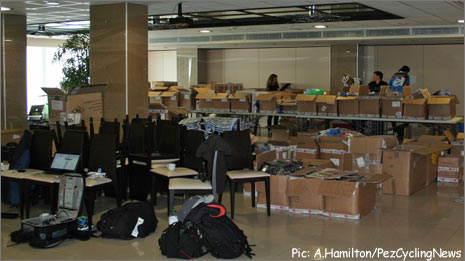 While we had been away the others had been stuck in the hotel sorting out all the riders clothing, shoes and other bits and pieces that keep a WorldTour team on the road and looking good – Another season starts!

Thanks to everyone at Garmin-Sharp for a very smooth and slick day, plus a very nice lunch although next year don’t let me eat so much squid – I can still taste the garlic!

Video: PEZ On Lance On Oprah