PEZ On The Road with Katusha

Our man in Spain, Alastair Hamilton, was lucky enough to receive an invitation to the presentation of the Katusha team and new clothing for 2015. He didn’t just go for the free food and drink, but spent the day with the team for a ride (in the car) and some interviews. Here is his day with the Russians.

After a few days of rain it was a relief see the sun was out for the Katusha team presentation last Friday in the Spanish seaside town of Calpe on the Costa Blanca. Visiting teams in the Calpe is becoming a bit of a habit, between the Esmeralda across the road, the Sol y Mar in the town center and the most popular Diamante Hotel, where Katusha and Astana are staying, I think most of the WorldTour and ProContinental teams have been in Calpe at some point.

Today it’s the Russians, next week it will be the Kazakhs, but today I can rub shoulders with ‘Purito’ and the guys.

It was a little strange seeing both teams in the same hotel at the same time as there were a couple of riders who had swapped from one to the other and of course the Katusha press guy, Philippe Maertens was with Astana during the time of Contador and Armstrong. There was no problem and the hotel café was doing a fine trade with both teams.

The Ride
The plan for the morning was for team photos at the beach, followed by an easy ride with some of the sponsors. Most of the sponsor representatives were looking forward to it, the guys from the bike sponsor Canyon obviously rode on a regular basis and the Frenchman from Giro helmets looked as though he could hurt a few legs. It was good to see Alexandr Kolobnev, he lives quite locally and the last time we spoke was during the Vuelta a España at a stage start in Calpe. On that occasion he had his little boy with him on his first bike.

Alexandr Kolobnev and his son in Calpe, Vuelta’10

I was also introduced to Tiago Machado who I was to interview later. It was hard to miss Tiago in his NetApp-Endura kit, maybe the rules should be changed or contracts should start in November. Tiago is a funny guy, so the interview should be interesting. 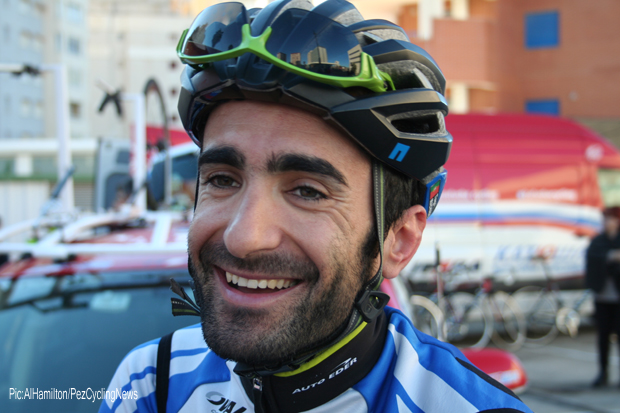 Trying to position 29 team riders with other staff and sponsors was like herding cats, add in some tourists wandering through the shoot and you should get the idea. 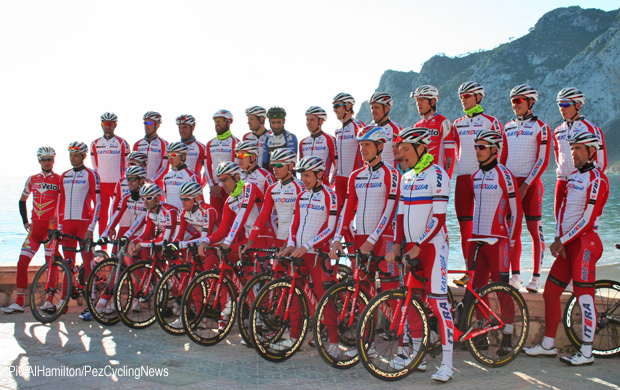 Photo’s done and we were off. My chauffeur was DS and ex German pro, Torsten Schmidt. He had a good career from 1998 to 2007 with the Tour de France under his belt and a lot of experience to draw on. 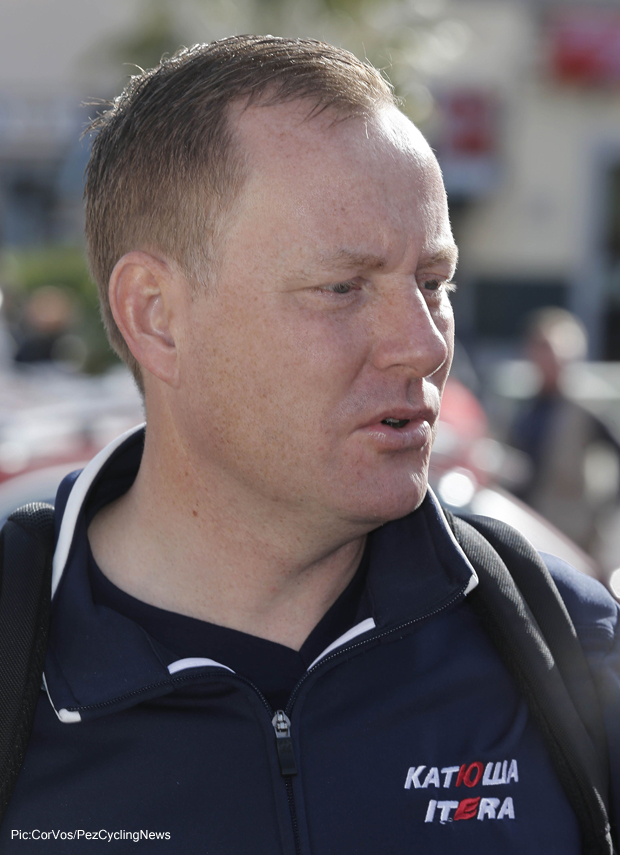 The ride was neither long nor hard as they took the coast road up to Moraira, the next village. It can be a busy road and it’s not wide, certainly not easy for a group of around forty riders and two team cars. It wasn’t easy to take photos, but with the clever driving of Torsten anything was possible. 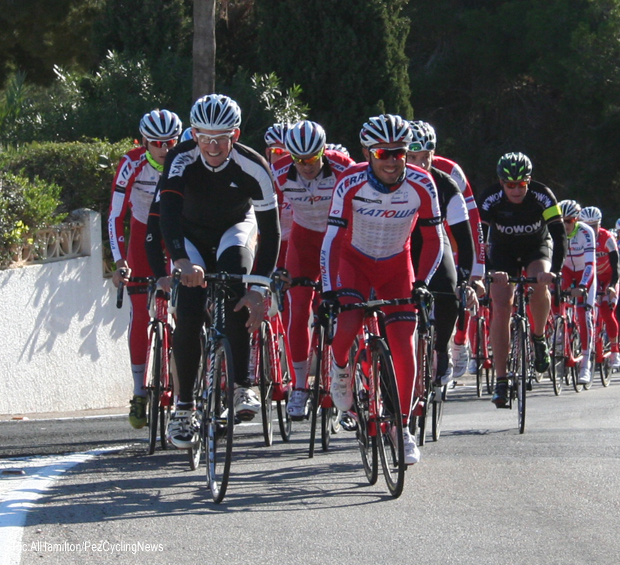 ‘Purito’ led the group with one of the guys from Canyon

Torsten hung up his race wheels in 2007 and worked for the Leopard team before moving onto Katusha. In his day you raced from February to October, so a Classics-man like him had to ride all the stage races. Favorite race? It had to be the Henninger Turm in Frankfurt. Torsten doesn’t get out on the bike so much these day’s and prefers running and his mountain bike for exercise, but he still loves watching cyclo-cross. At Katusha he will be looking after riders with both Grand Tour and Classic aspirations. 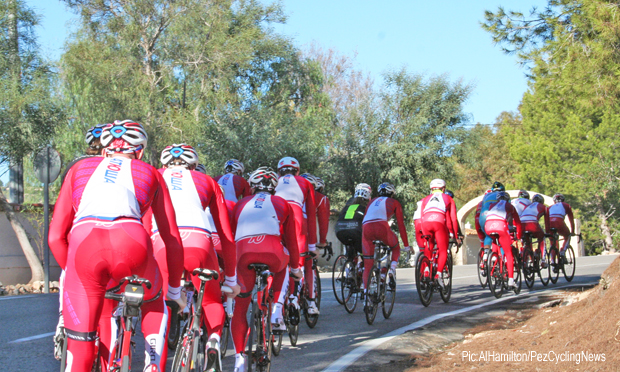 It wasn’t all flat

The Interviews
Ride over and so it was interviews next: Tiago Machado, Marco Haller and World Under 23 World champion Sven Erik Bystrøm. Good chat with lots to talk about, past races, teams and the future, but you will need to wait for them. 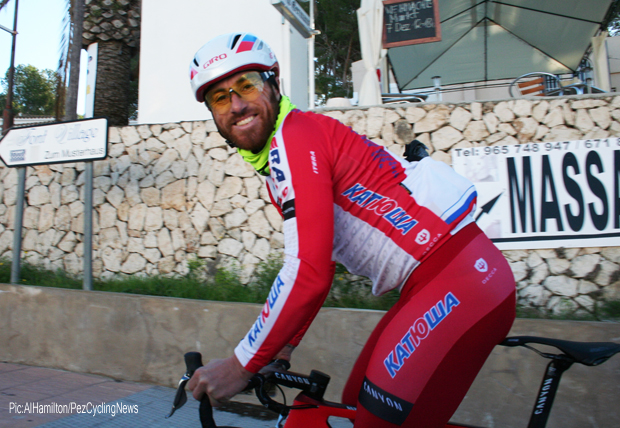 That beard of Luca Paolini’s is still there for 2015

The Presentation
Next up was the team presentation and what a presentation it was. A shadowy room, colored lights, heavy metal music, tall leather wearing Russian girls, rich looking guy’s in suits, free drink, a selection of nibbles and as much Russian caviar as you could eat. 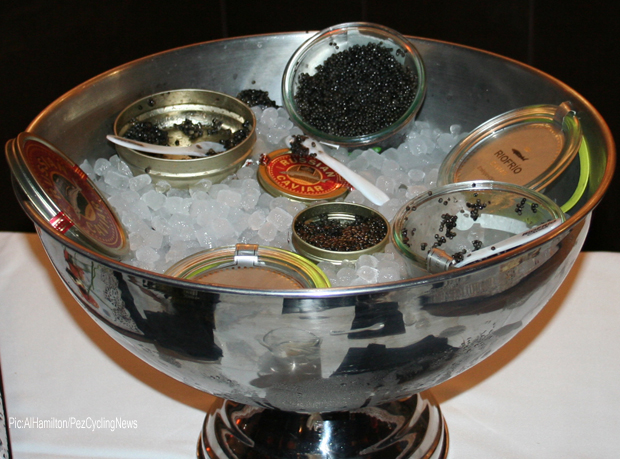 Everyone wanted the Russian caviar

Strangely for a gathering in Spain there was no queue for the jamon serrano or the cheese platter, everyone was diving into the caviar and I must admit, it was nice. After a bit of mingling, drinking and partaking of the free food; the lights dimmed and the music started to boom out as a promotional video showed the wins and top performances of the Katusha team in 2014. 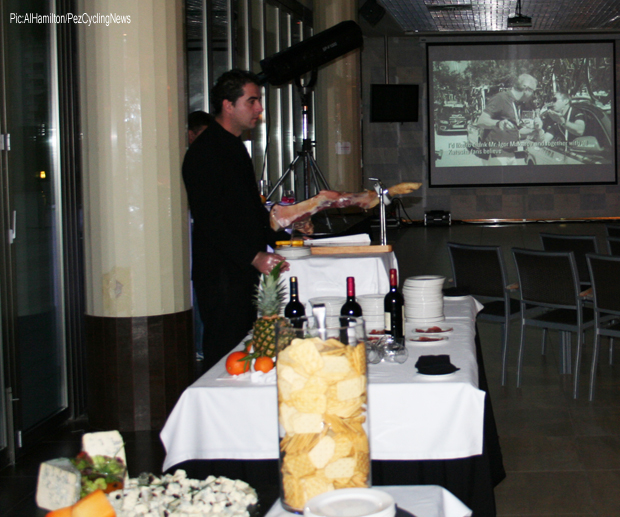 The cheese and jamon was not so popular

As the proceedings were to be in English and Russian, the team’s two media guy’s; Philippe Maertens and Vitalii Abramov were there to hold the proceeding together, first describing the teams’ 2014 successes and then to call up on stage Katusha team general manager Viacheslav Ekimov. He described the last six years of the team, as it progressed year by year and that there would be great victories in the years ahead. After more good words from the president of Russian cycling and the president of Canyon, the team bike sponsor, Roman Arnold; it was time to introduce the riders and the new clothing for 2015. 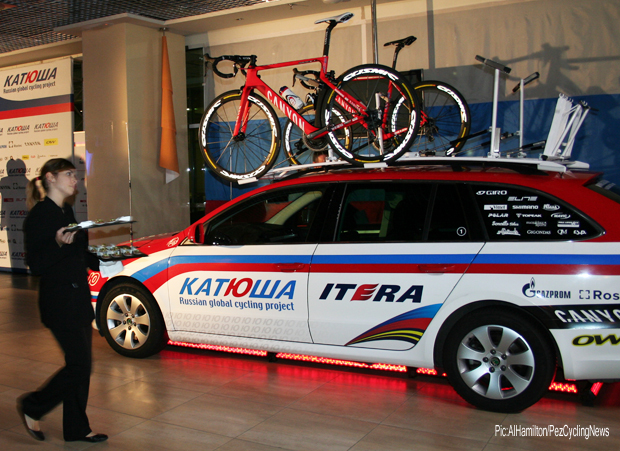 No idea how they got a team car into the hotel, but they did

First to be called up was World Under 23 champion and Katusha neo-pro; Sven Erik Bystrøm. The new jersey looks better than last years with some multi-colored stripes, but still with a fair amount of red. The others in the first group were: Zakarin, Smukulis, Selig, Guarnieri, Kochetkov, Losada, Isaychev, Lagutin and Kozonchuk.

A question for Sven Erik Bystrøm: You are a World champion, but you cannot wear the rainbow jersey, how bad is that? “Well next year I’m not an Under 23 rider, so I don’t mind wearing the Katusha jersey.” What did you do with that jersey? “It’s hanging on the wall at home.”

The next group of riders: Vicioso, Trofimov, Haller, Kolobnev, Machado, Paolini, Silin, Kuznetsov and Belkov. A question for ‘new boy’ Tiago Machado: This is a new team for you, you have been here for three days, what is your impression of the team? “It’s a pleasure to be here, first of all. The impression is really good because it’s one of the biggest teams in the peloton and I am happy for the opportunity to be back in the WorldTour.” 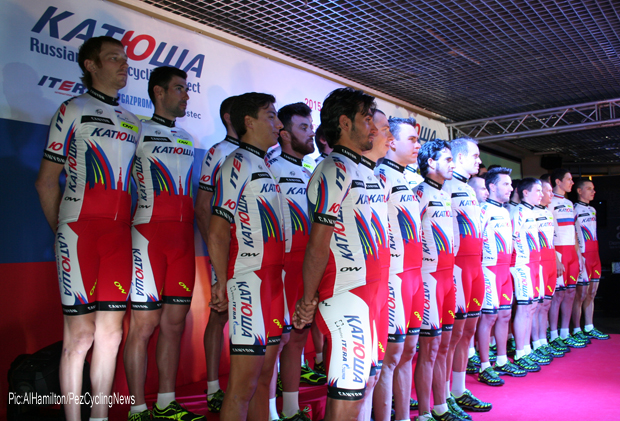 A question for old hand in the team, Alexander Kolobnev, what aims do you have for the next season? “We have many, many aims for next season and everyone wants to get them, but I hope to help the young riders to get (UCI) points to get as many Russian riders as possible in the Olympics and to do my best in the coming season.” 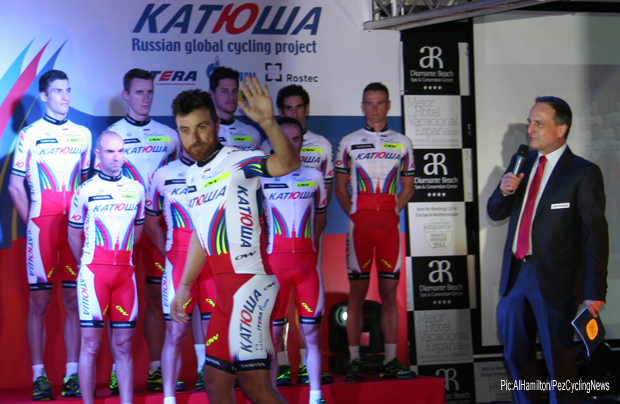 Aleksandr Posev: “Next year I will start all the best Classics in the World and I am ready for the challenge and will be on my maximum of 100% for the results.”

Joaquim Rodriguez, why were you in Japan two weeks ago? “I was in Japan for the third time and I really like it. I was there at the invitation of Canyon, but it was my duty because I like the bikes so much.” This year you had bad luck with crashes? “I had some bad luck and crashes this year, but I have trained the same way as this time last year, so in theory if I don’t crash I should have a good season like previous seasons.” 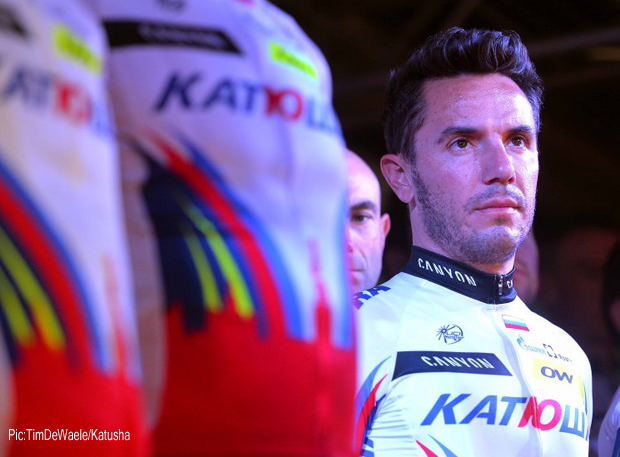 Alex you have been in a Russian team for some years, but you didn’t have much chance to speak Norwegian, but for next year we have Sven Erik Bystrøm, so you should have more chances? “It’s nice and he has been my room mate here, but it’s difficult because sometimes I catch myself speaking English to him, so it’s different but nice.” 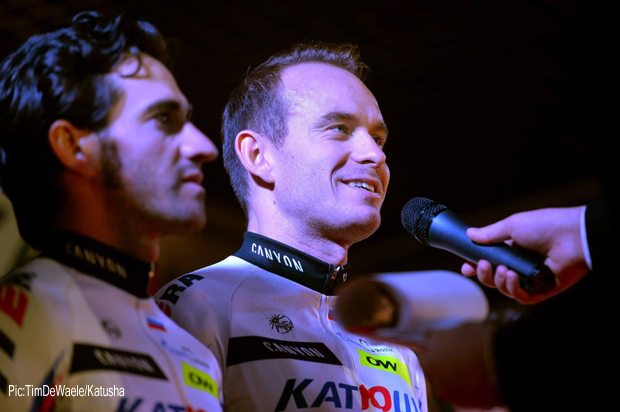 Katusha’s top winner; Alexander Kristoff will give it 100% for more wins next year

This year you have had a lot of victories, was that the limit or do you have more in your legs for more victories? “I hope it doesn’t stop there. I will try to do the same preparation as I did last year. At the moment I feel good, so let’s see what I can do next year.” What do you think of the new bike? “I rode it in the Tour last year and I felt a big difference, it’s a great bike, it’s the best bike I ever had and I think everyone who rode it said they can feel the fastness and I think that helped me in the Tour this year.” 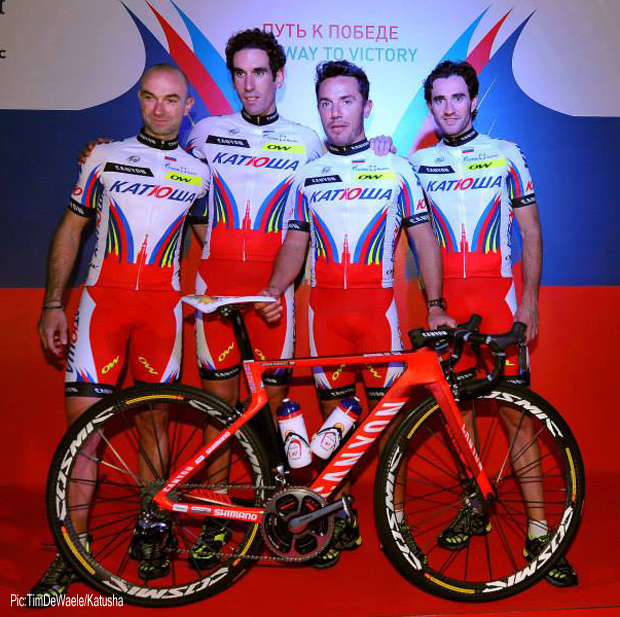 Vicioso, Losada, Purito and Moreno with the new bike

Time for team photos and to present the team’s sports directors: Florencio was at the UCI and not present, but Mikhaylov, Cozzi, Konyshev, Schmidt and the main director Azevedo were all there.

Some last words from Ekimov and more photos with the sponsors and to stand for the Russian National anthem and it was time for the open bar, some casual chat and more photos before the trip home. 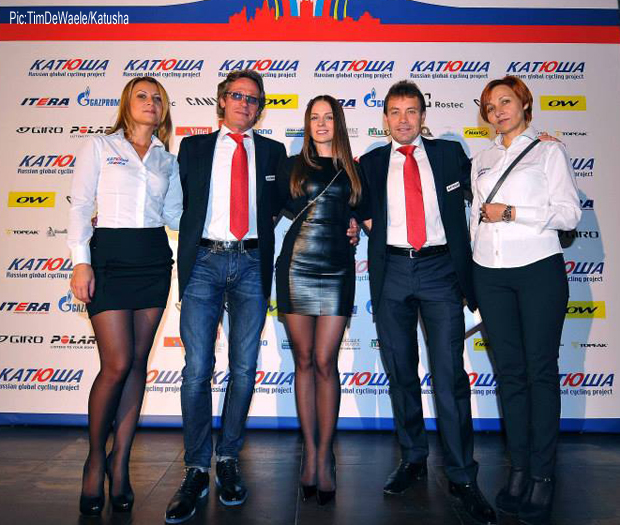 Uchakov and Ekimov with other members of staff

If the team is as well organized on the road as the presentation, then there should be more big wins for the Russian Katusha squad in 2015.

Thanks to Philippe Maertens and Vitalii Abramov for the invite.