PEZ On The Road With The Shack!

The training camps have hit the ground running and here in this part of Spain we can’t move for WorldTour teams on the roads of the Costa Blanca. The list is too long, with Ag2r, Vacansoleil, Orica-GreenEdge, Argos, BMC and RadioShack-Nissan, plus the usual smattering of solo Pro’s. RadioShack was the first team to make contact, so off we go. 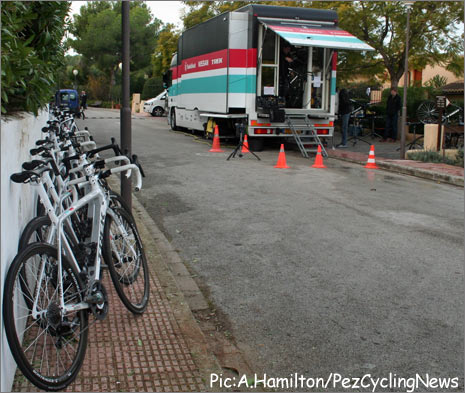 Last years’ RadioShack-Nissan-Trek press day in the Costa Blanca town of Calpe (Spain) was a busy affair with a lot of journalists, photographers and TV crews, but you must remember the team was billed as the “Super Team of 2012”. The team was the coming together of the Leopard-Trek team of the Schleck brothers and Fabian Cancellara with the RadioShack team under the management of Johan Bruyneel. The all conquering team to beat just didn’t happen, bad luck, accidents, crashes, the possible positive dope control of Frдnk Schleck at the Tour de France and the fall-out from the USADA case on Johan Bruyneel and the termination of his position with the team. 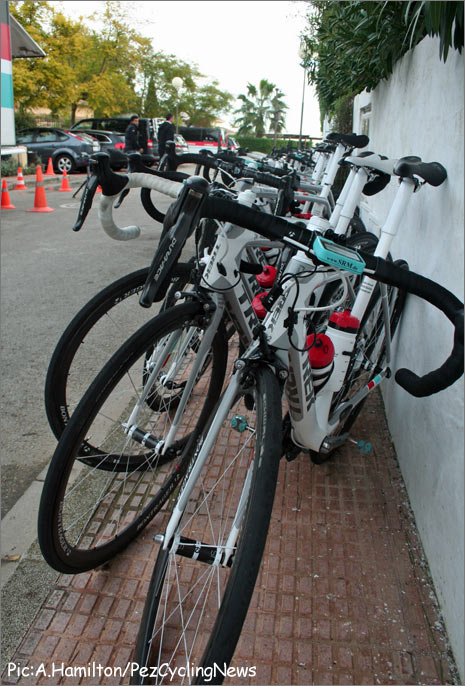 So this year’s press day, up the road from Calpe in Javea, was a bit more of a low profile event, but that was the way the team wanted it as the team presentation will be in January a little further south in the beach resort of Benidorm. Press officer Philippe Maertens had invited me the week previous reminding me that they were staying in the same hotel that we met back in December 2007, time flies!

That year the team was a coming together of Discovery Channel and the Astana team during the suspension of Alexandre Vinokourov with the new management from Johan Bruyneel and top rider Alberto Contador who went on to win the Giro d’Italia and the Vuelta a Espaсa. 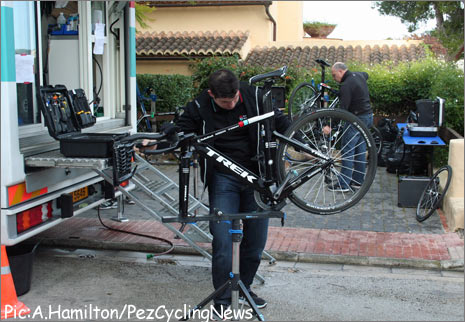 OK that’s the history out of the way, what about my day with the RadioShack team. An early start to the day to catch the riders going out for their ride, it was actually a rest day for the riders, but riders have to ride their bikes, although a coffee stop seemed more important. 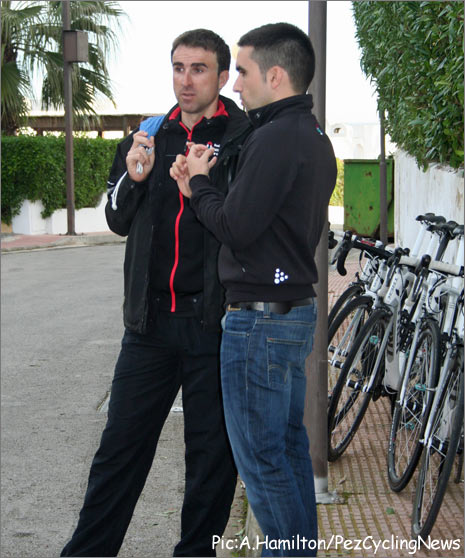 First rider to appear after breakfast was Haimar Zubeldia, just checking the bikes and talking things through with new team trainer; Josu Larrazabal. Earlier in the week he had been doing aerobic and power tests on the local climb of the Col de Rates. As Larrazabal explained: “Both tests are good to assess the level and to organize the work we need to do in the weeks to come. These are not the only tests that we will be doing during the season, but these are very important anyhow. I believe the riders prefer this kind of field test to lab testing. It comes closer to a race situation than sitting on a lab bike. It’s more specific, more concrete.” 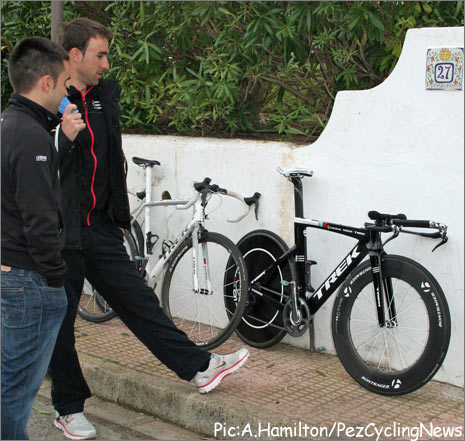 Next to them was the time trial bike of multi-champion Fabian Cancellara, interestingly on the top tube was a small plate with “*TONY M.*” stamped on it. At first I thought it referred to World time trial champion; Tony Martin and it was a joke by the mechanic. That is half correct as it is a joke between the mechanic and Fabian but it dates to before Tony Martin was his main competitor at time trialing. The Tony M. in this case is Antonio Raimundo “Tony” Montana from the 1983 film Scarface starring Al Pacino. More than that I can’t say. 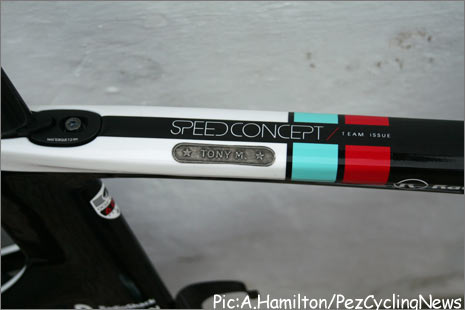 Other riders started to return from breakfast, first up was Andy Schleck, followed by Frдnk, Fabian and Andreas Klцden, none of them in any hurry. 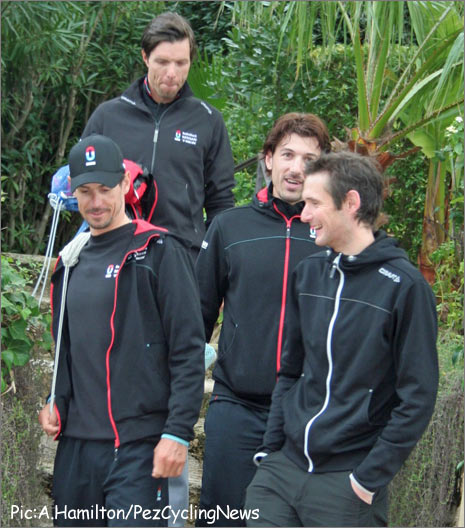 The last rider to appear for breakfast was Jens Voigt, with him was team director; Dirk Demol going for an early ride. The 1988 Paris-Roubaix winner still looked fit at 53; he’s been a DS for five different teams, much better than his first job in the carpet factory when he was a kid! 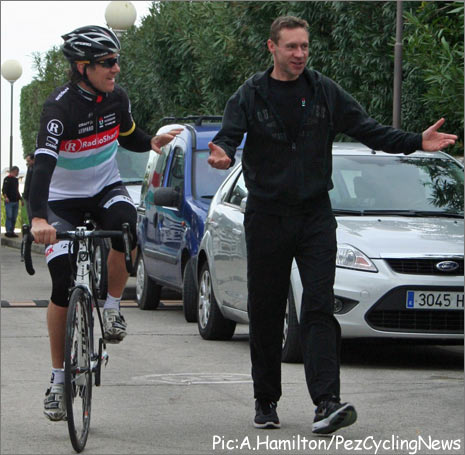 As usual the mechanics were hard at work, today they were getting the time trial bikes ready, there was also talk of a new prototype that Cancellara was putting through its paces for Trek, but today it was under wraps. The new guys on the team were trying out their TT rigs. 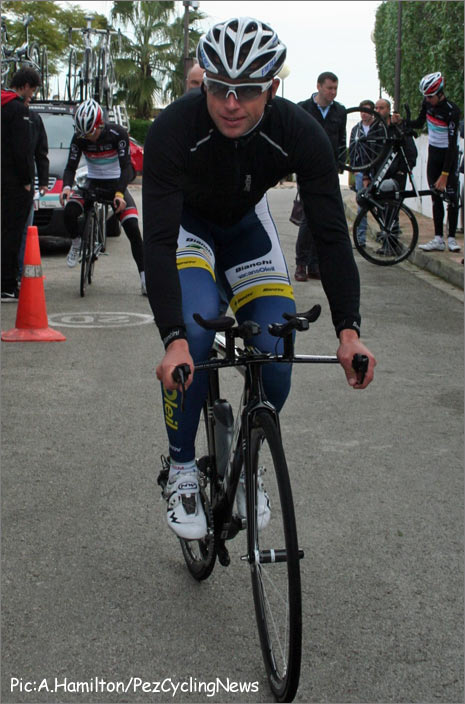 Stijn Devolder has won the Tour of Flanders and Belgian National road race and time trial championships each twice, plus a load of other races. He will be on the team to help Cancellara in the Classics as well as taking his own chances when possible. 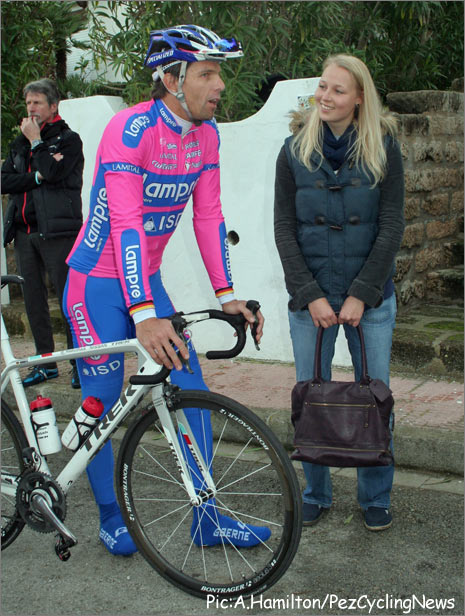 Ex Lampre-ISD rider Danilo Hondo is another rider for the Classics and shorter stage races, today he had a very pretty fan for encouragement.

Robert Kiљerlovski had a good 2012 season with Astana, with high placings in Paris-Nice, Catalunya, Suisse, Basque Country and 5th in Flиche Wallonne. 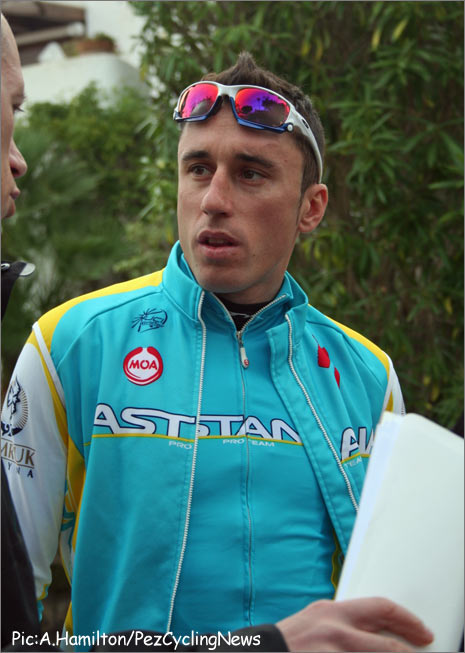 Everyone was waiting for the Schleck brothers to arrive to start the ride; this gave me a good chance to chat with team press man Philippe Maertens whose other job is commentating at cyclo-cross races back in Belgium. What did he think of the domination of Sven Nys? “He has been very good, but will he win the Worlds…probably not, but it’s only December, things can change before the championships.” Philippe recently rode and finished the Crocodile Trophy Mountain Bike race in Australia, was that fun? “Yea, but very hard!” 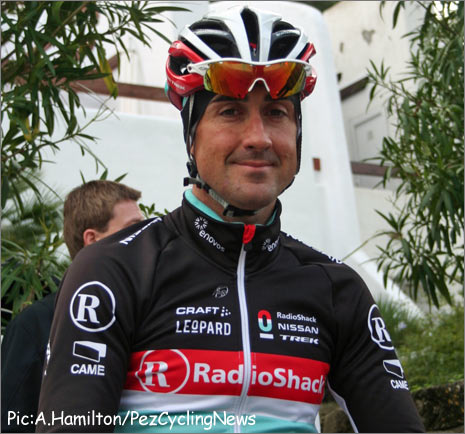 Talking of antipodeans, it was good to talk with New Zealander; Hayden Roulston, he assures me he’s a big fan of PEZ and sends his regards to our man in Scotland; Ed Hood. He does like our interviews and articles, but appreciates the “Daily Distractions” and the less serious items, as he points out; “you need a laugh!” His form is good, but would probably miss the Tour Down Under due to a previous engagement. 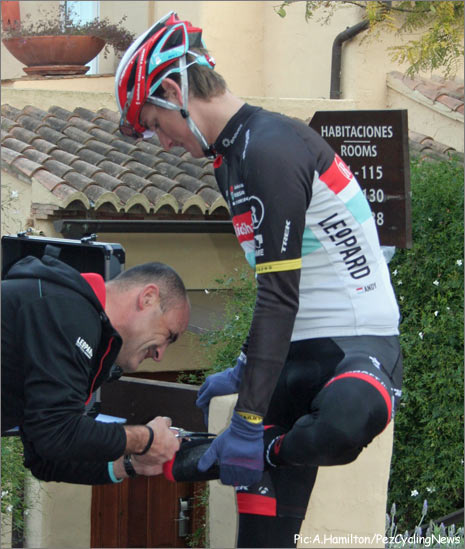 The Schleck’s had turned up by this point, although Andy needed some shoe plate adjustments, when you see a mechanic doing this while the rider is still wearing the shoes it reminds me of a farrier or blacksmith tending a horse’s hoof. 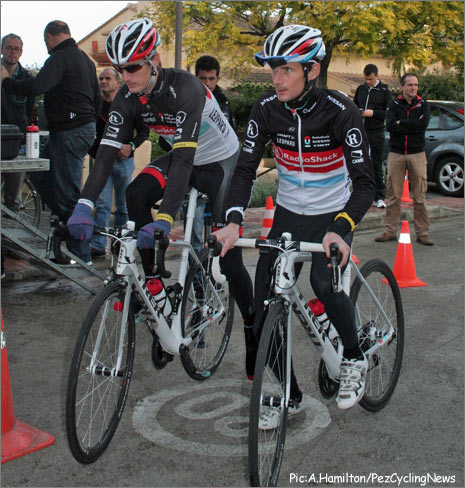 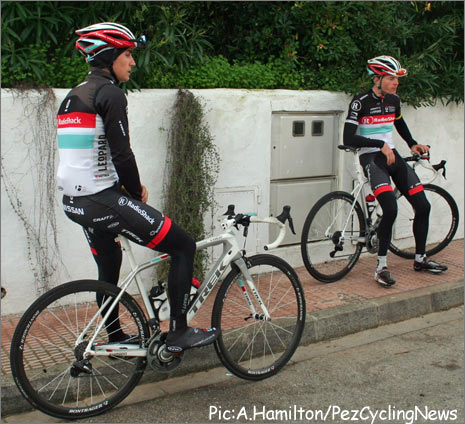 The main group was around fifteen riders, they were going to ride a couple of hours with a coffee stop, still to leave was Fabian to test the new TT machine, Ben King and Matthew Busche waiting for Jens Voigt and Chris Horner with his own problems. 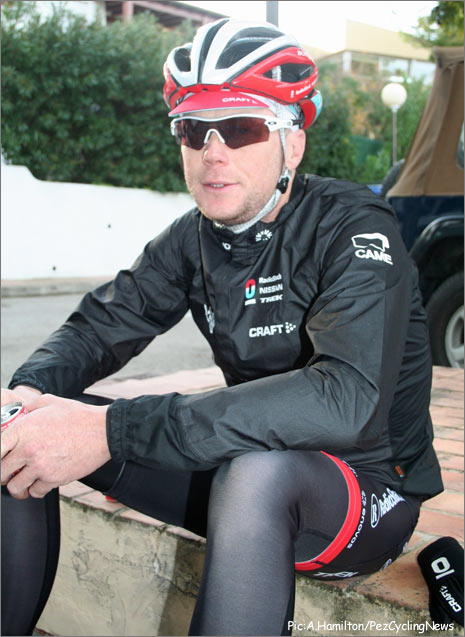 Chris, what is the matter? “My suitcase has been lost for five days; it might be in Valencia airport?” Chris has a house in Javea, very near to the teams’ hotel, so his answer to the problem was simple: “If the case doesn’t show up soon, I’ll be going there. I don’t get many chances to visit as I’m not here that much.” He did eventually head off on his own, he knows the best cafes in the area. 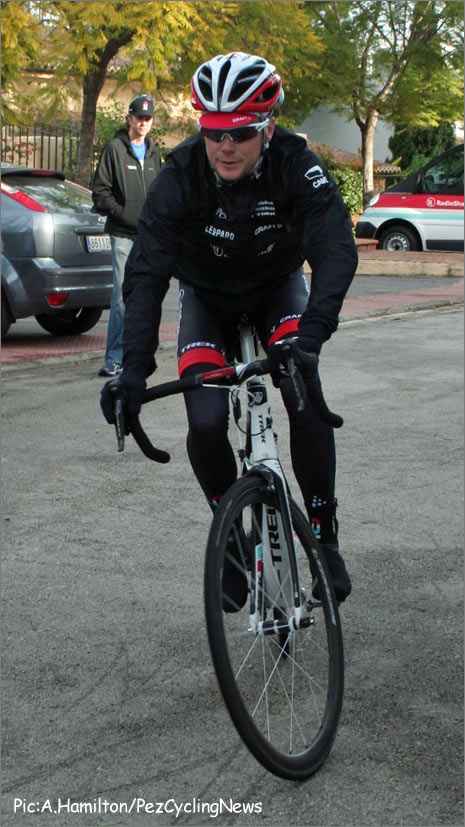 Fabian Cancellara with a small group and a following car with that new bike were next away. 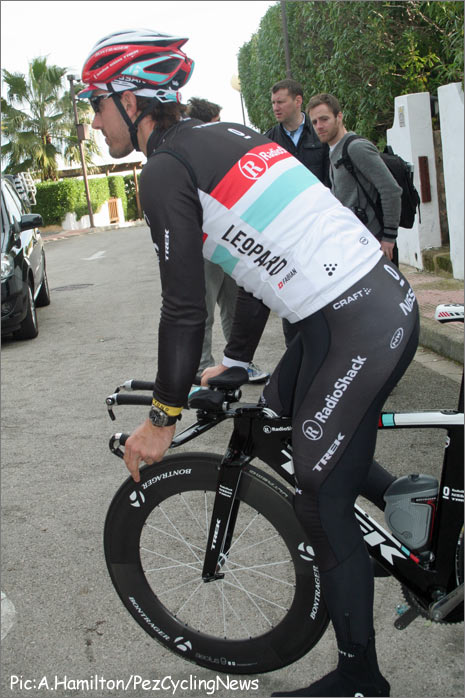 Still no sign of Jens Voigt and Ben and Matthew were convinced that they had been “flicked” by the others. 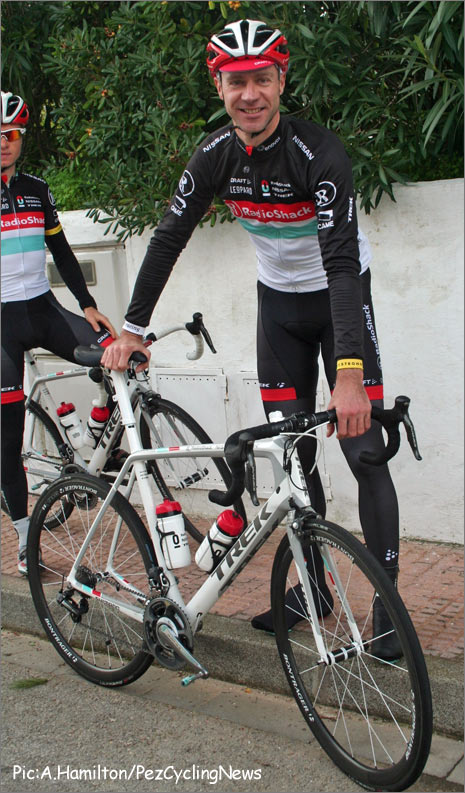 But in the end the “old” German turned up in his usual high spirits. With the riders gone and the interviews with Fabian Cancellara and Andy Schleck scheduled for after 2pm, this left me a good couple of hours for coffee and carrot cake down at Cafй Nostro – except they had run out of cake!

Keep it tuned to PEZ for interviews of The Shack stars coming soon.