PEZ On The Scene: A Day With Garmin-Barracuda!

Training camp time of year is probably the busiest time of year (for me) around this area. Astana, RadioShack, BMC, Quick-Step, Euskaltel-Euskadi, GreenEdge, Cofidis, Vacansoleil and many other smaller teams converge in this part of the Spanish coast for hard training in the mountains. I try to visit as many teams as I can, and this time round, it was the Garmin-Barracuda team who opened their doors to the press and with a nice lunch too!

It was a cold morning that took me to Calpe on the coast of the Mediterranean; the weather had been warm and sunny for…months I think. Today it was a little overcast though, fortunately with no chance of rain. Last year I didn’t manage to visit the Garmin team training camp as they were up in Girona, too far for me, this year the 25 minute drive was well within my comfort zone. 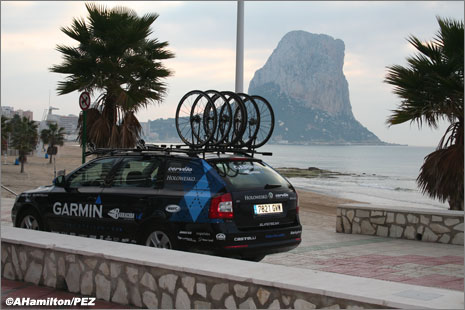 I got to the plush Hotel SolyMar early to see what was going on (not much) and to catch up with my old mate Alan Buttler, he has been the mechanic on all the Johan Bruyneel teams since U.S. Postal, but with the combining of RadioShack and Leopard, staff had to go and Alan with all his experience was snapped up by Garmin for 2012. 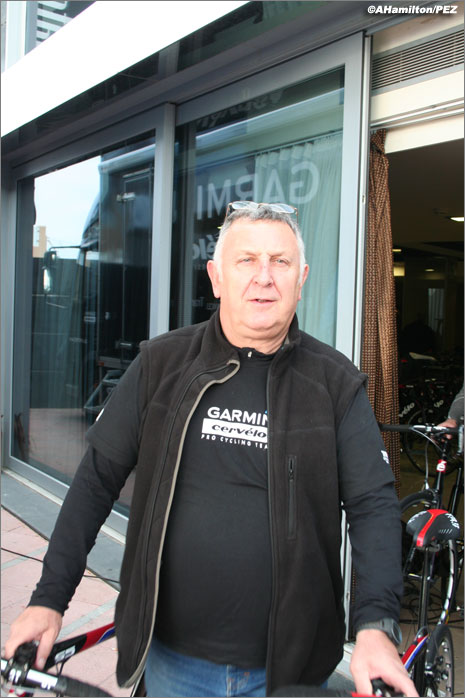 In the hotel bike room; work was going on getting the bikes ready for the day, plus lots of work for the coming weeks and months, including the time trial bikes. Also the Tour Down Under bikes had just arrived back from Australia and needed checking over as there had been a couple of crashes. 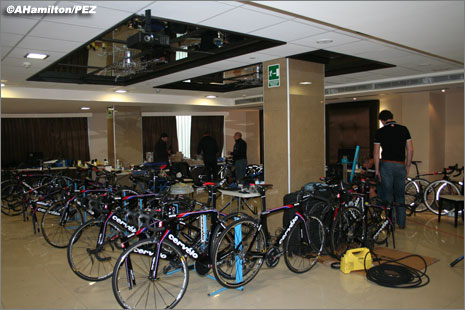 Hard work in the bike room

The team trucks also needed sorting out. The big truck was to be empty, but the smaller van was to be filled with all the stuff a WorldTour team needs to keep running. Slotting all those bikes and wheels in looked more like a jigsaw puzzle. 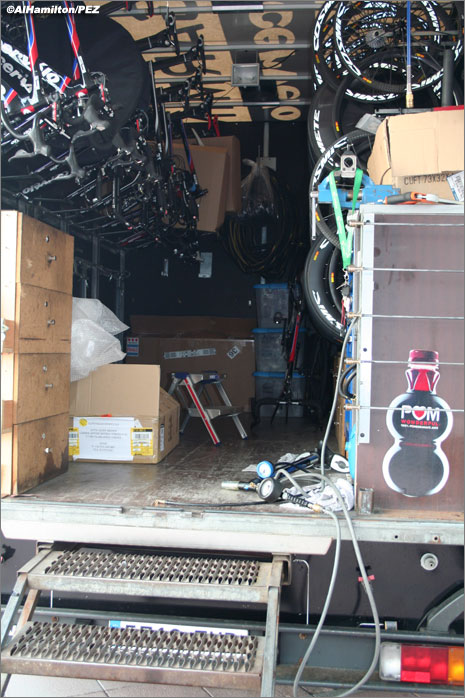 Bit of a tight fit!

All these vehicles are registered in Spain and are based in Girona where Alan will be flitting in and out of controlling the “Service de Course”. 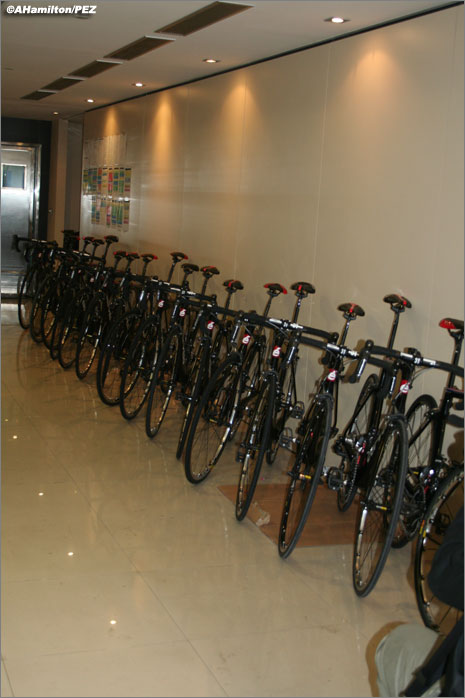 The bikes were ready to go, lined up in the hotel, but when you have a team this size everything takes time, even just moving bikes outside. 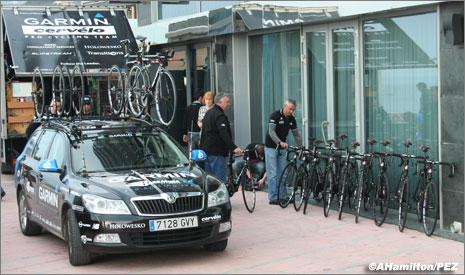 The riders started to come down to check their bikes, one of the first was David Millar (who I interviewed later), he must have been getting used to the warm weather because when he came down he was definitely under-dressed and had to return to his room for more clothes, which nearly caused him to miss the ride. 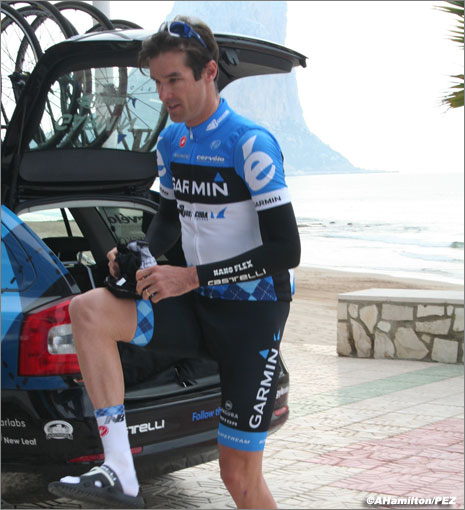 It’s not that warm!

With more and more riders gathering, things were starting to get a little chaotic at the beach front hotel, not just team members and the press, but passing tourists wanted to know what was going on, there are a lot of Belgians in Calpe, so most knew the score. 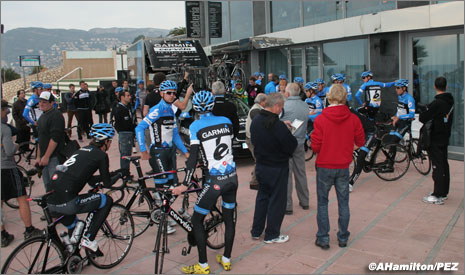 Where are we going?

Martijn Maaskant had just returned from the Tour Down Under, he looked fit, but was suffering from jet-lag. The TDU group were not going on the full ride of over three hours; they were to loosen the legs and then rest. 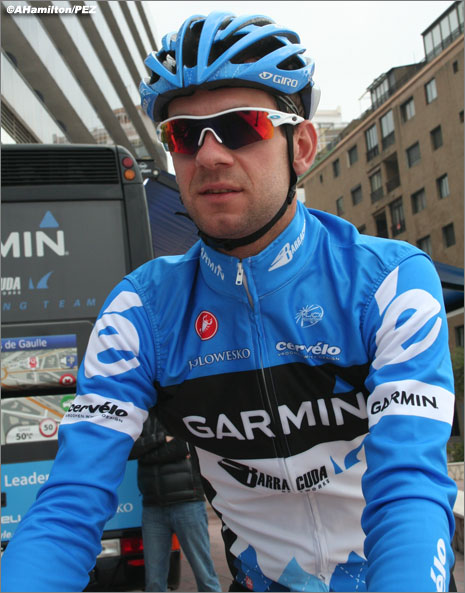 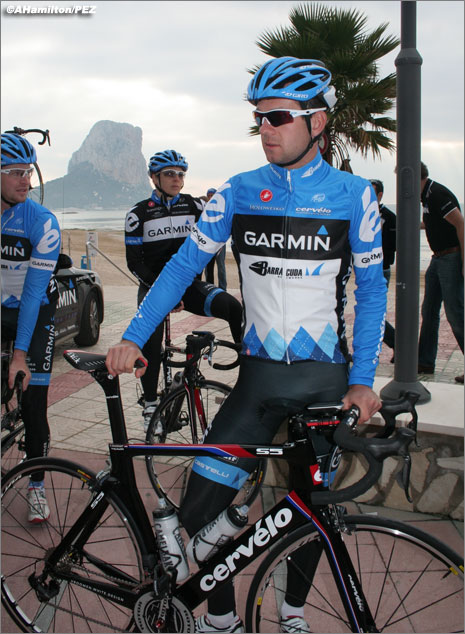 Another fit looking rider was Tyler Farrar, I wanted to interview him later, but he was one of the most sought-after riders and wouldn’t be available for me to talk to, but these things happen. 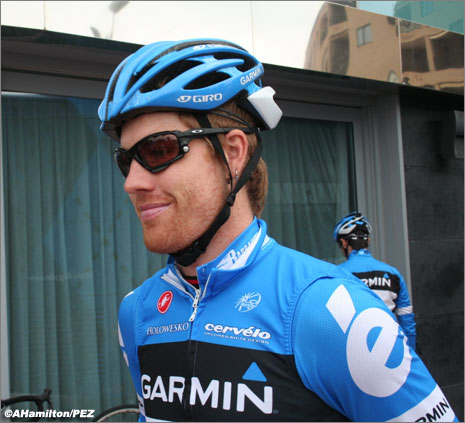 The group were nearly ready to go, could that be a mullet? Yes, but is it connected to the head of Johan Vansummeren or is it Thomas Dekker? On this occasion it was the hirsute Dekker, so the mullet isn’t dead, not on this team anyway. 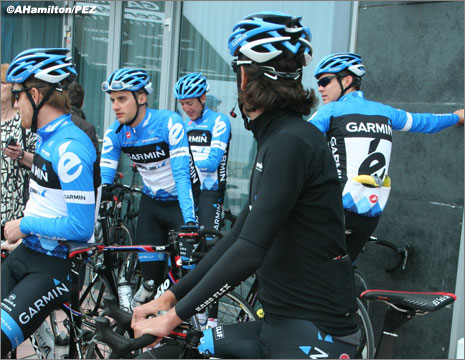 The Tour Down Under group waited for the others to go and with some last words from Allan Peiper they too go. As there was no room in a car for me to follow the groups and take photos it was time for a coffee with Alan and catch up on any scandal he had heard in the world of cycling. 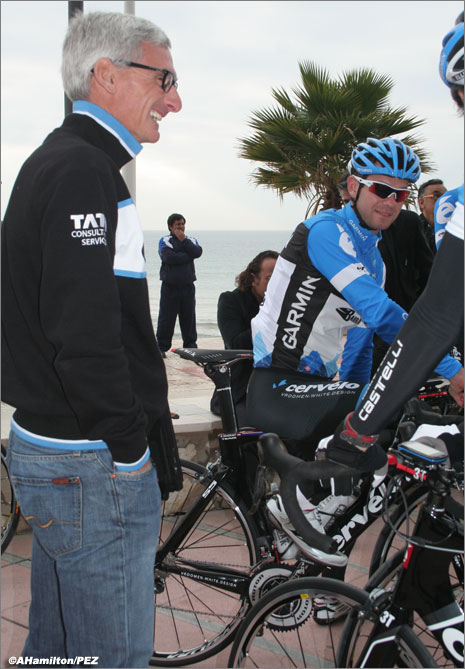 Alan Peiper and the TDU group

Back in the hotel work carried on sorting out the rider’s kit for the season, boxes and boxes of clothes, shoes, helmets etc. The correct size for the right rider and then all the other little bits and pieces to keep the riders happy has to be sorted out before they all go off to different places, maybe not to meet up for a long time. 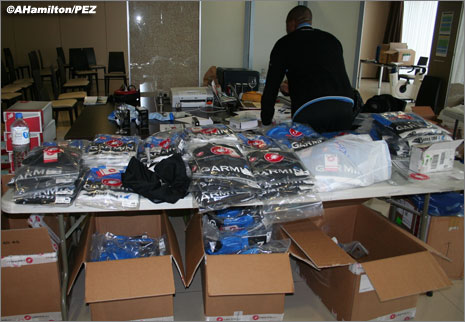 Upstairs in the hotel reception area Alan Piper was sorting things out for the coming season. 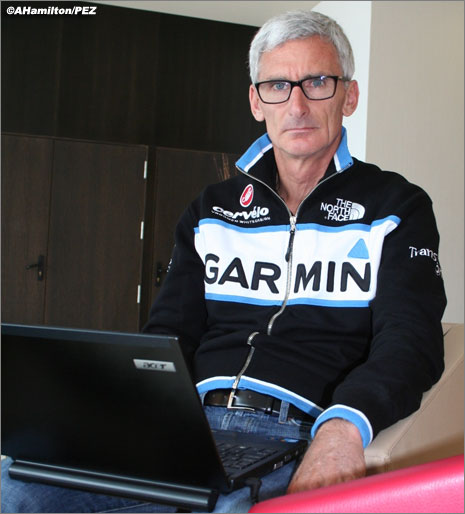 The experienced Charlie Wegelius is now a Director Sportif for Garmin-Barracuda and still looks like he could ride a Grand Tour, but his place is now behind the steering wheel, bananas are still a favourite. 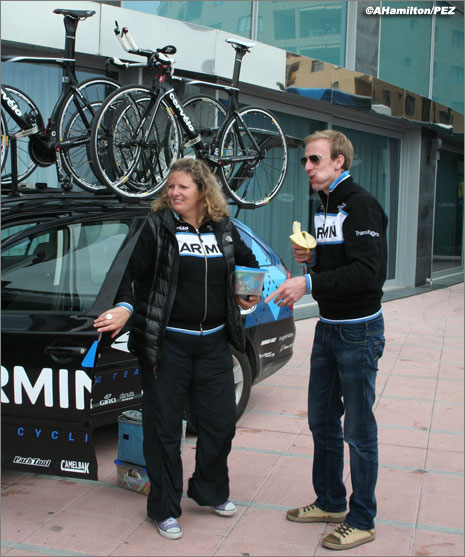 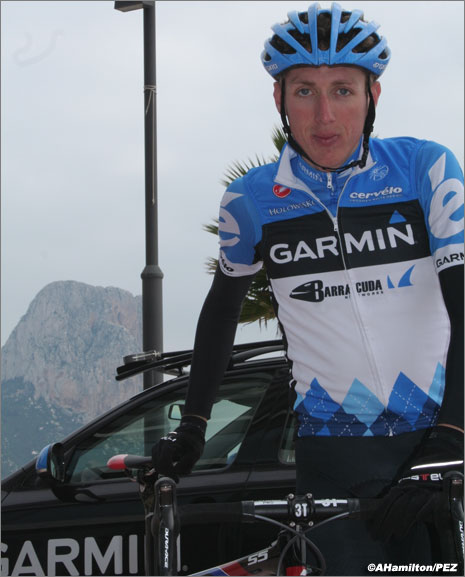 The riders started to return in ones and twos, Dan Martin amongst them. Always happy and keen, so who better to interview later (soon on PEZ). By 2 o’clock all were back home and lunch was served and I’m glad to say there was an invite for the gathered press. 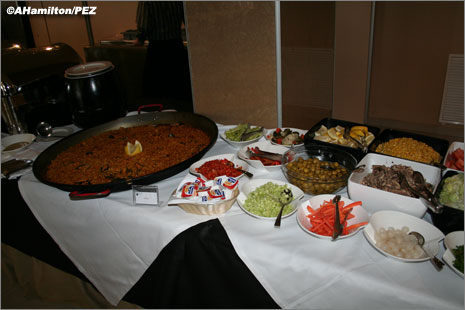 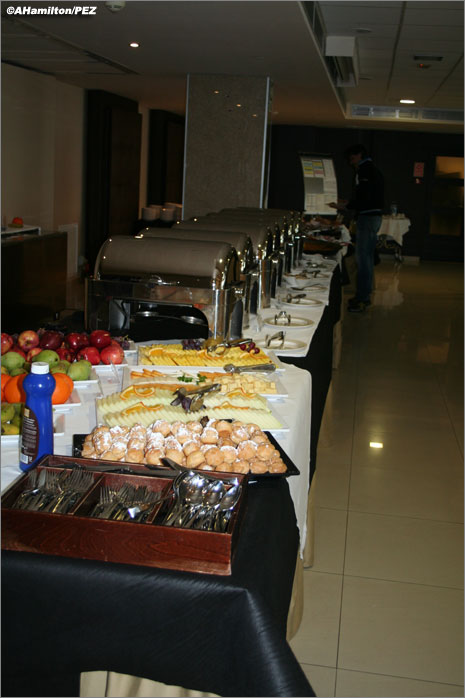 After lunch the riders went down to the beach for a different sort of team photograph. Aftet that it was time for the interviews, David Millar up first and then Dan Martin, both interesting talkers, as soon as I can type them up they will be on PEZ. 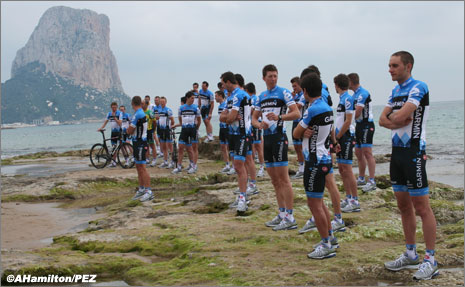 That was my day with Garmin, great to catch-up with Alan and to meet the guys, thanks to Marya from the team’s press office for making it all happen. Thursday and Friday it’s the BMC team training camp and presentation with more interviews. Stay PEZ for lots more from Spain.

Breathplay: Turn Your Breathing Upside Down