PEZ On The Scene: A Day With “The Shack!”

Well, it’s that time of year again…December is training camp time in this part of Spain and the coastal town of Calpe is probably the favourite venue for the Pro teams. This year RadioShack-Nissan-Trek was the first team to turn up for a full training camp. There have been a few small groups of riders, Astana also arrived around the same time, but it was “The Shack” who invited me to come and visit.

This year the RadioShack training camp is very different, and there was an odd feel to things. Let me explain. It is one team, but there were two RadioShack team cars and the mechanic’s truck, then there was a smaller Leopard van and a Mercedes people carrier. The bikes were all Treks, obviously, and all were the same colour- a white, light blue and silver combination, which must be the team colour for next year, but the RadioShack riders had to wear their clothing from this year which didn’t match the new bikes. 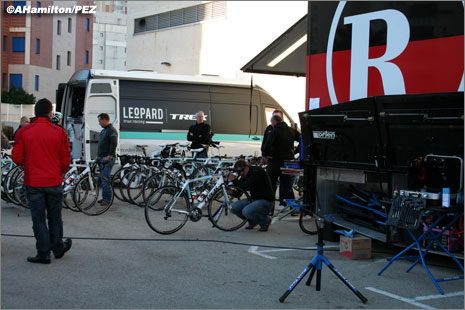 There was also a feeling of two camps, not from the riders as they were mixing together as bike riders do, it was the team personnel. They reminded me of the first day at high school with groups in different parts of the play-ground eyeing each other up with a certain amount of suspicion. I’m sure that will change with time. 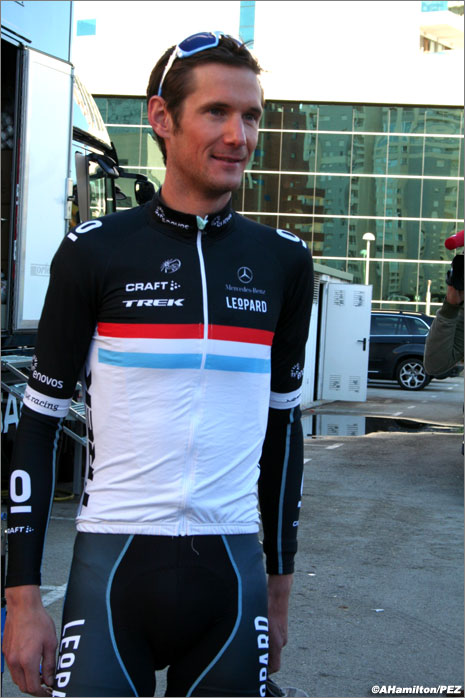 For me the big change was not meeting up with my old mechanic mate Alan Buttler who was working for RadioShack, Astana, Discovery, US Postal and Motorola before that, but will not be with the new set-up. He will be working for Garmin-Cervelo next year so we will meet up, but it was strange not to see him. 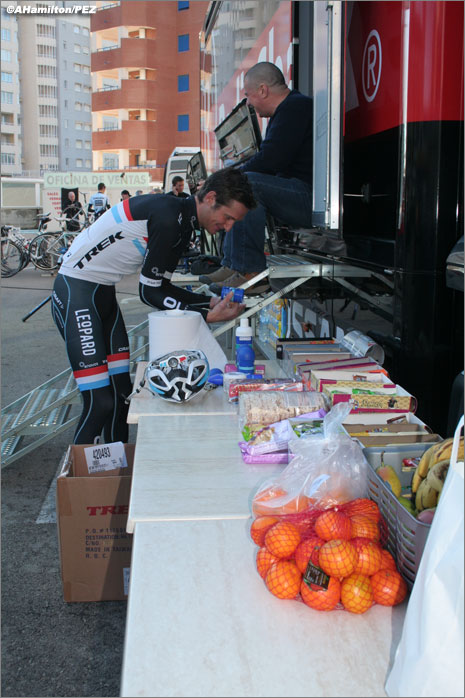 Philippe Maertens was there, and there were still some familiar faces amongst the staff and riders. Like any change; you soon get used to it. 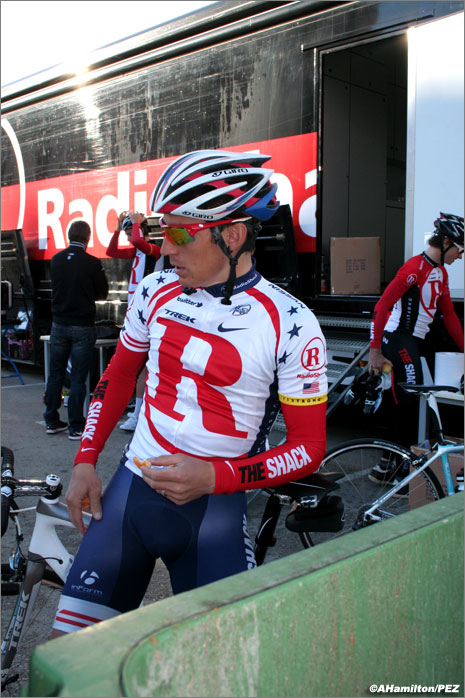 Frank Schleck was one of the first riders down to the trucks, maybe he wanted first pick of the fruit on offer? Haimar Zubeldia next as he was still messing with his position as were the new guys on the team, Jan Bakelants (ex-Omega Pharma-Lotto), Hayden Roulston (ex-HTC), Laurent Didier (ex-Saxo Bank) and Tony Gallopin (ex-Cofidis) who were all on new bikes from the team bikes they had been riding this year. 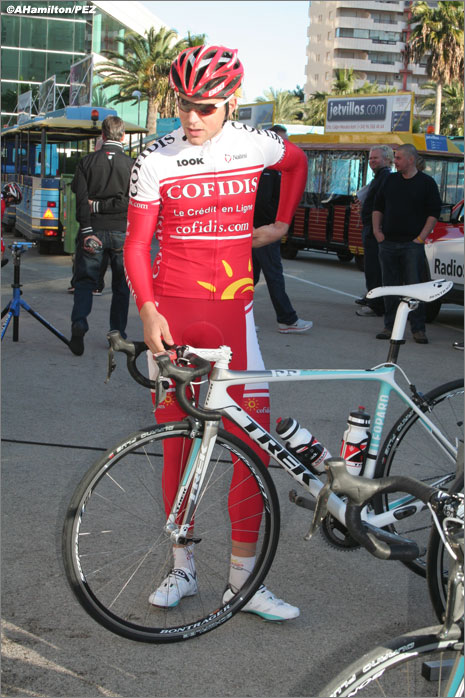 Haimar Zubeldia filled me in on the days training ride: a four hour ride was on order, riding up the coast towards Valencia, and inland towards the hills and the town of Pego. Normally I would have expected them to go over the famous climb of the Col de Rates from there, but Haimar said it was back to the coast and Calpe to finish because of the press conferences/bike fitting/massage etc. They would ride in two groups today with the Leopard-Trek development squad on a different route of their own. 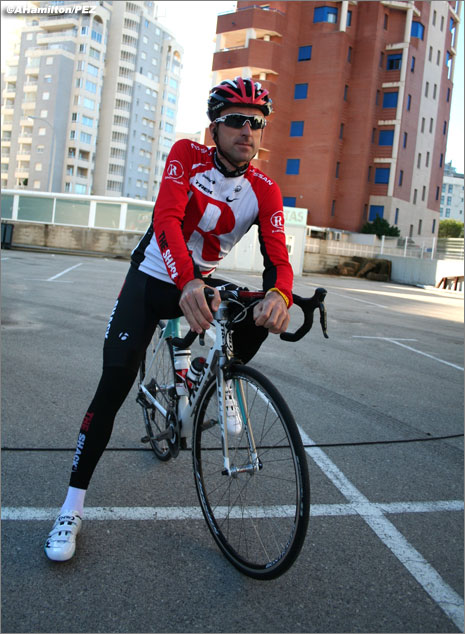 That man Jens Voigt was his usual happy self, a “Hi, how are you?” and he’s looking for his bike. Andreas Klцden is never too talkative and I think that was a smile, it was just another day’s training; at least it was sunny and warm. 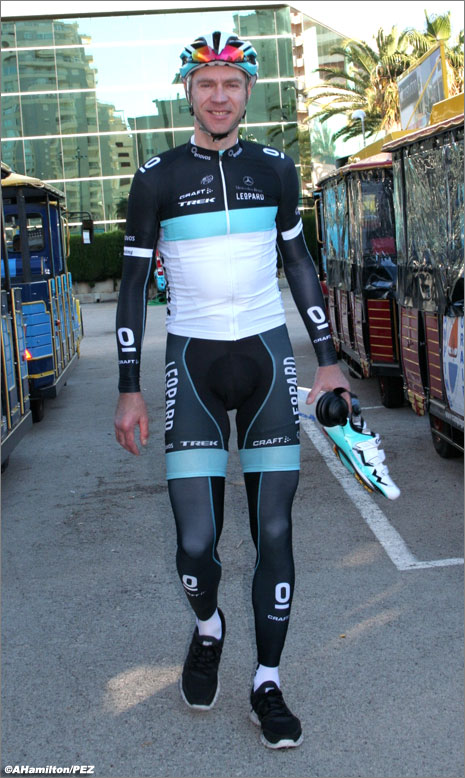 Later in the day there were to be some interviews. Unfortunately Fabian Cancellara was feeling ill and would not be training nor meeting the press. He did wander down to tell the mechanics to put his bike back in the van, and he didn’t look too good. I asked if I could take his photograph, “no I don’t feel good…and don’t look good either!” I had to agree and didn’t want to get too close either. He said he would be back to training in a couple of days. 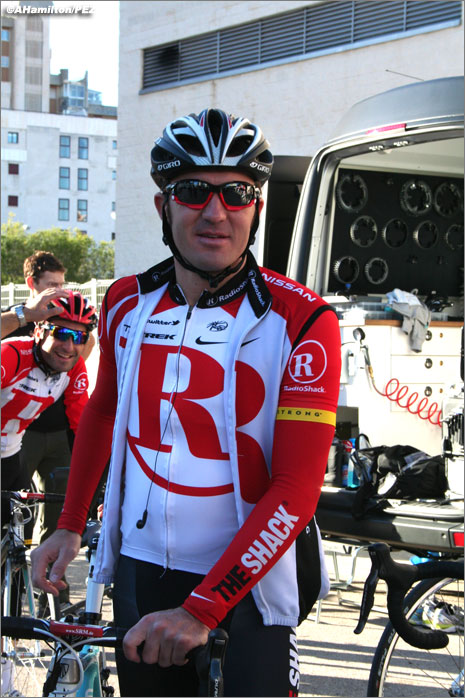 The other riders were getting ready to go; US champion Matthew Busche looks very young, or is that just me? Giro di Lombardia winner Oliver Zaugg had every reason to be happy with his end of season form. Two other National champions were there for the ride, German Robert Wagner was having a laugh, what about I’ve no idea and New Zealand champ; Hayden Roulston looked a little out of place in his old HTC kit, that I’m sure will change. 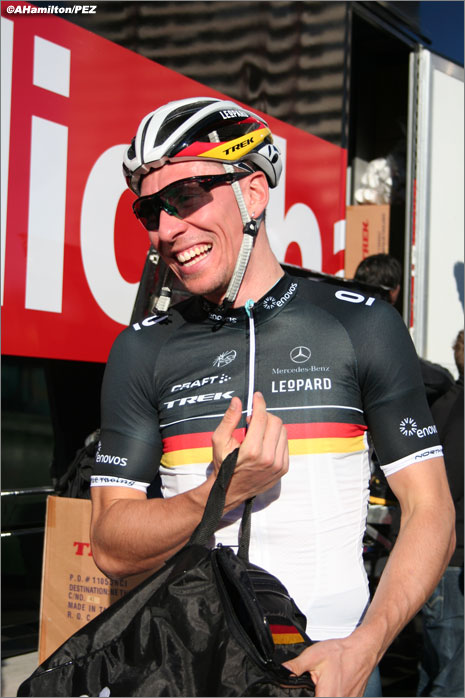 Waiting and ready to go was “Old Hand” Yaroslav Popovych, he’s seen it all in his time. OK ready to go and it’s Zubeldia who heads off and with a shout of “come on ladies!” from Frank and they were away. 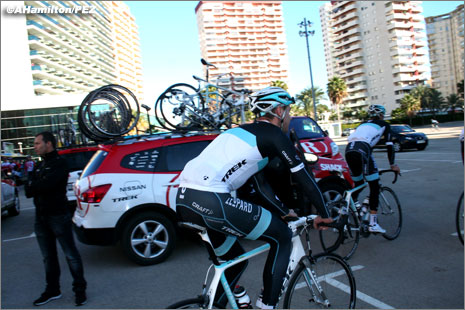 In the afternoon we had the presentation of the Leopard-Trek development team and interviews with the Schleck brothers and a very long and enlightening talk with “The Boss” Johan Bruyneel. More of that later, once I’ve typed out hours of recording. 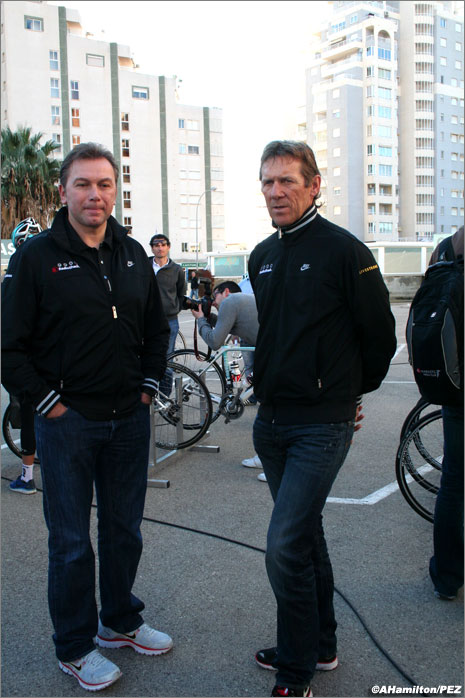