Team training camps are a nice way to meet the riders and staff, there’s not the same pressures as at a race, it’s more laid back and like meeting up with old mates on their holidays…well it feels that way for me, but then I’ve not been doing seven hour rides every day! The yearly invite came from Quick-Step and as usual I was there…

The normally sunny southern Spanish day started with a sea mist rolling in from the Mediterranean giving an eerie and quite chilly start. By 11 o’clock the fog had been burnt off by the sun and we were facing another great day around Calpe on the Costa Blanca of eastern Spain.

I say 11 o’clock because there was no urgency for the Quick-Step riders as this was a day off after many hard training days. It must have been the same plan for the Katusha and Astana teams, who were also lodged at the Diamante Hotel, as there was no sign of any of their riders, bikes yes, riders no! 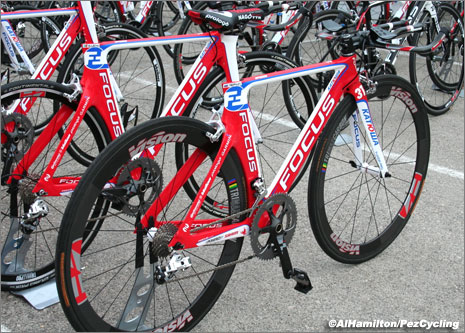 The Diamante Hotel in Calpe is now the Mecca for Professional cycling teams, they all come here. Mind you it’s a great hotel, the weather is perfect and the roads in this area are just made for training: some flat roads up the coast and lots of climbing inland. For a Belgian team, it couldn’t be better as there are so many of their countrymen here, some are old pensioners who continually want their photo taken with their hero “Tommeke” and many others who own bars and cafes in the area. 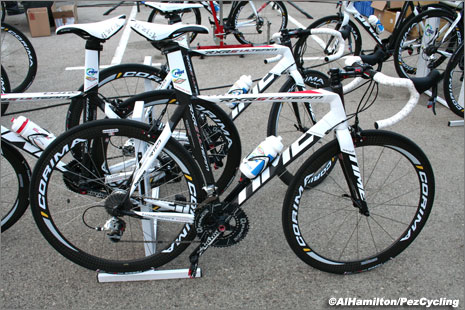 I arrived at the hotel at 9:30am just in case I missed anything. In the car park the Quick-Step guys had everything ready and work was going on, on some new Eddy Merckx bikes, the Merckx bikes were also being used by the team next door; the more modest set-up of Mercator-Topsport. Their riders were ready to go and I recognised a face from my childhood; team manager and ex-Champion Walter Plankaert, he was a star…oh! Way back! Now he runs the Topsport team which has brought many a young rider through to bigger teams. 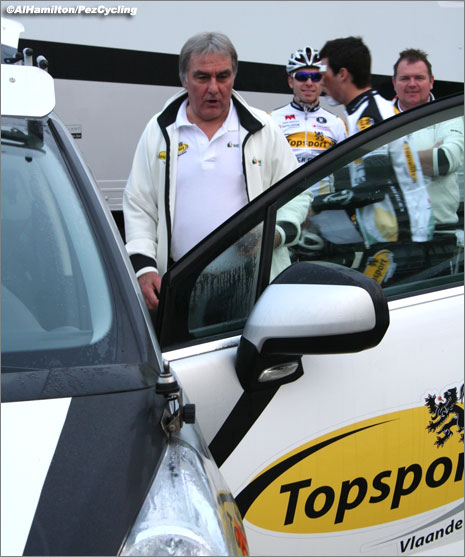 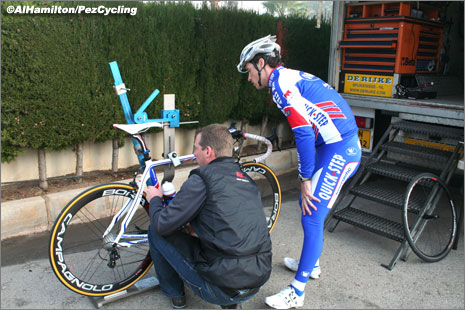 First of the riders to come to the truck was Sylvain Chavanel and Jerome Pineau, they were having small adjustments to their new team bikes, but both seemed pleased with their Eddy Merckx’s, Sylvain wanted to know the weight, 7 kilo’s isn’t bad, the wheels where the nicest parts for me, Campagnolo Bora Ultra. Pineau’s bike just needed the tape to be replaced after the brake levers had been adjusted. 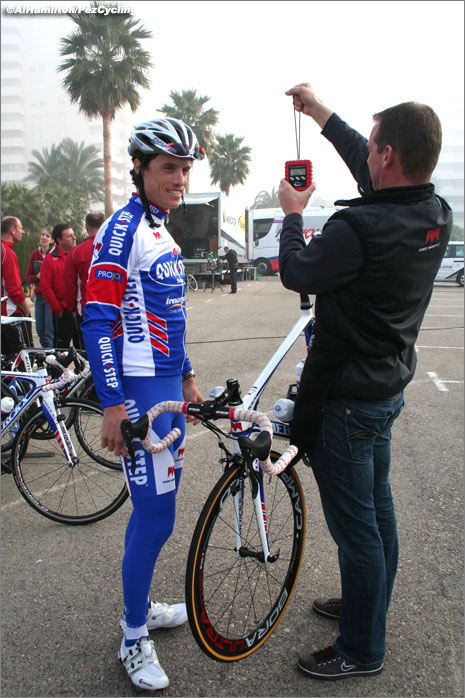 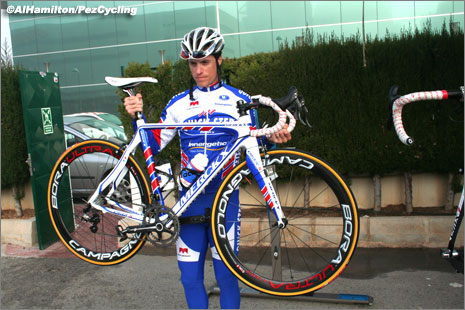 They were to join the ride later, but wanted a test ride first…time for a coffee for me. 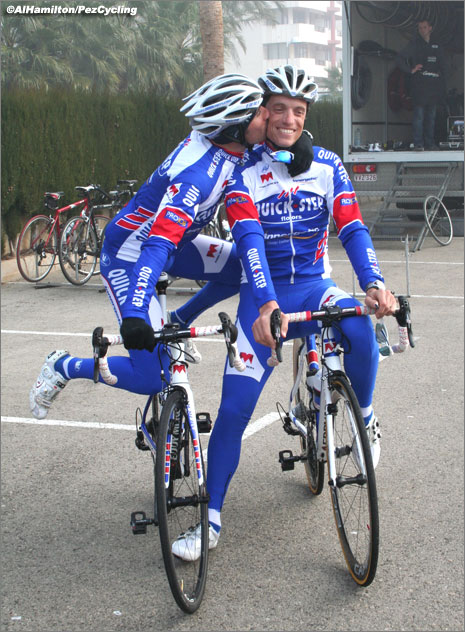 Inside the Diamante there wasn’t much going on, Mario Cipollini is working with Katusha and was wandering about in the hotel looking for some of his riders, when I asked if I could take his photograph he was more interested that I snap his old mate David Bramati, DS with Quick-Step. 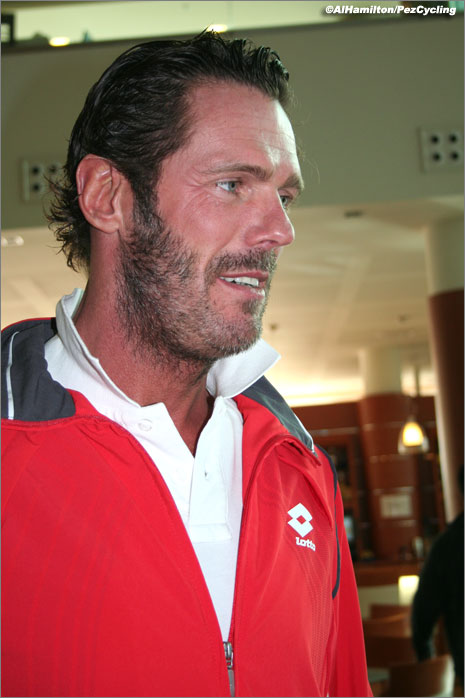 Over coffee I had time to chat with Alessandro Tegner the PR with Quick-Step. How is Tom’s knee holding out? “It’s good; he’s been doing six and a half hour rides with no problems. He has to pass certain tests to satisfy in his own mind that the knee is OK! But so far it’s good,” 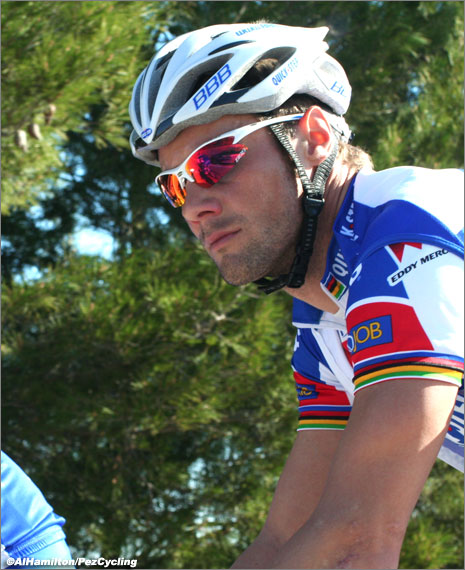 What about the Iljo Keisse situation? “Its difficult for the team because when we signed him there was no problem and now there is, he was in a different team when he took that control.” He rode Rotterdam but not Bremen? “He needed to have all the paperwork translated into German and then would have to put it before a new judge. The translation would have cost 6,000Ђ alone, so in the end he decided not to start.” He is in a difficult situation? “Yes, you think if we had a court case against us we would still be able to work and live normally until there was a judgement. Not a sportsman, he has to wait on the sidelines until the case has been heard and then wait for a judgement!” 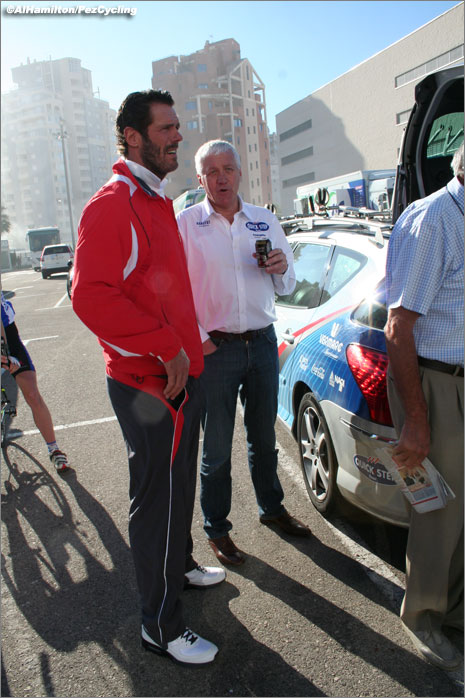 Coffee over, it was time to see the riders outside the hotel and go for a ride in the country-side. Tom Boonen’s bike needed new handle bar tape as he has been experimenting with different brake lever positions, so the 11 o’clock start was put back and back…. 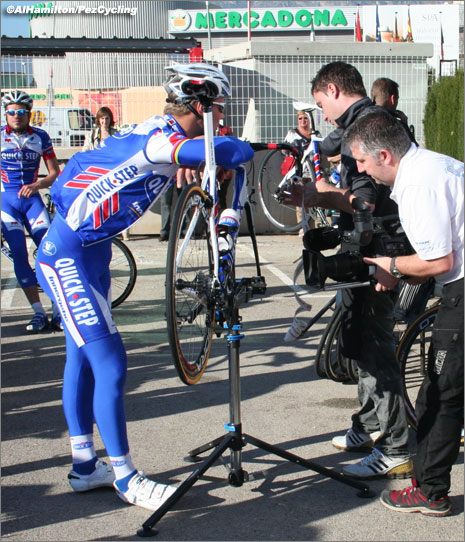 Eventually we jumped in to the team cars, a film crew on a motorbike and six photographers in the two team cars. Out of Calpe on the road to Moraira for a bit of posing. A gentle ride, but still not one I would have liked to join up with, the speed was not high, but when they hit the climb away from the coast the speed stayed the same. 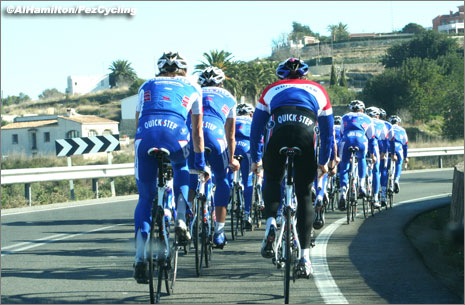 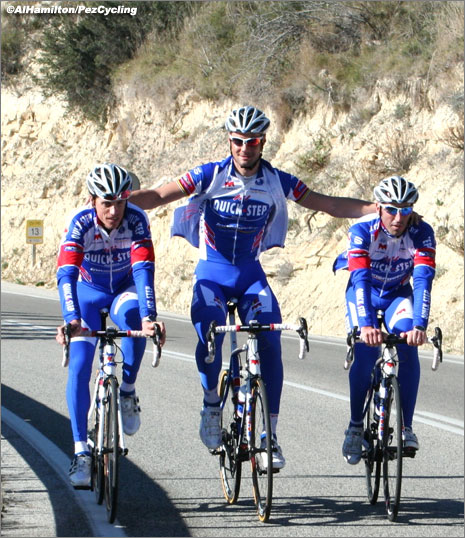 At this point Boonen, Chavanel and Pineau shot off the front for some photos, up to this point Dutch Champ Niki Trepstra had been leading the group. If his form comes at the right time I would look out for him in the results. 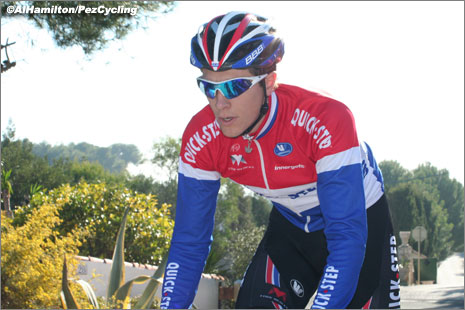 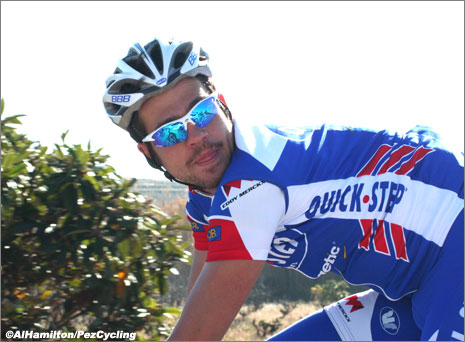 The stars of the team had their minute of fame, much to the amusement of an old man tending his vines, leaving us a nice ride back down to the coast for another coffee at the sea front in a bar (you guessed it!) owned by a Belgian woman. 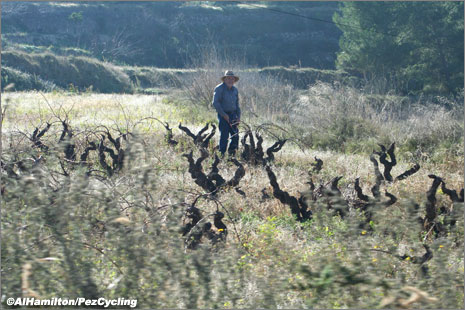 The riders relaxed, we relaxed, everything was relaxed! Tom had to sign the usual autographs and have his photo taken with “grandma” but life was nice. As Alessandro pointed out “it beats working!” 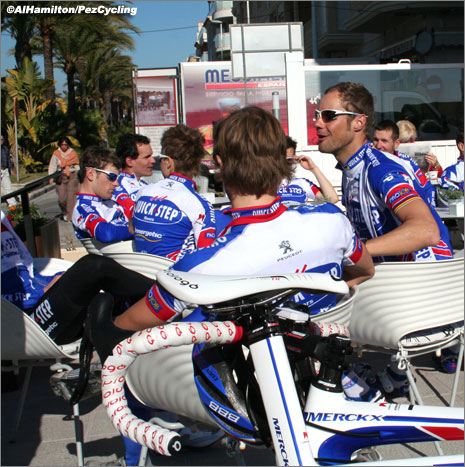 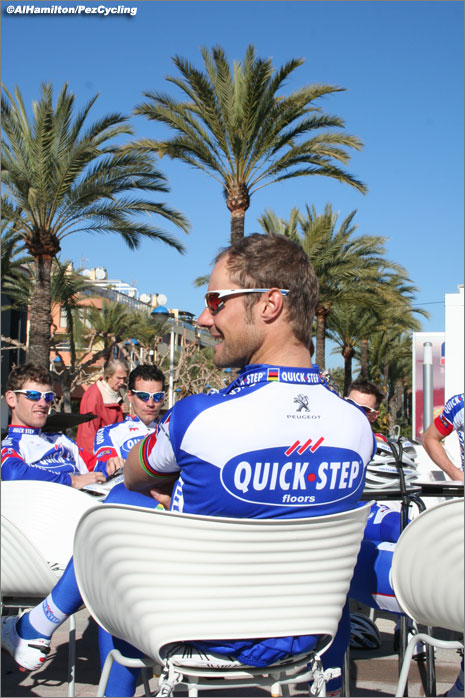 We left the riders to sit it out for a while and drove back to the hotel and time for me to go home and some reality. Visiting teams at their training camps is a very nice way to spend a day, but then you have to choose your photos and write the article…ah! It’s a hard job, but someone has to do it!!!