PEZ On The Scene: Twenty3c-Orbea Team

Training camp season has nearly finished for this year, all the Pro teams have gone and there are only small groups of pros getting some extra training here on the east coast of Spain. All the top teams come here and some of the smaller ones too, Twenty3c-Orbea had been getting the miles in when I called on them in Torrellano.

This winter I’ve been lucky enough to visit the RadioShack, Quick-Step and BMC teams at their training camps here in Spain, along the way Katusha, Saur, Garmin and Astana were also spotted out on the roads, so it’s been a busy time. But what about the smaller teams, the more “modest” set-ups? I heard that the UK team; Twenty3c-Orbea were training about an hour’s drive south of where I live…so off I went to meet the lads! 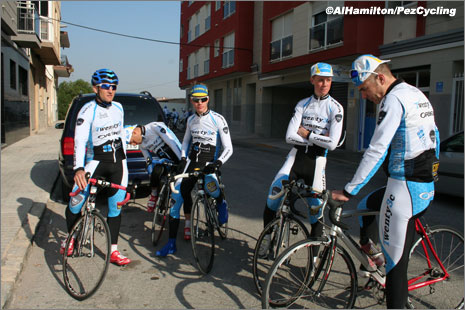 Are we going yet?

The Twenty3c-Orbea team is quite a mix of nations, a bit like the main sponsors, Twenty3c is a specialist bike shop based in Milton Keynes and Orbea are, as you probably know, the Spanish cycle manufacturer that also supplies frames to the ProTour team Euskaltel as well as Kelly Benefit Strategies, Andalucia-Caja Granada and their own Orbea Continental team which feeds riders in to the Pro ranks.

Twenty3c-Orbea is basically a young team…well until you add in Andy Lyons! At 41 he takes the average age from around 20 to…but the experience he has is a great tap for the younger stallions, more about him and the others later, first we need to take a ride down the coast for some photos before we can stop for a cafй con leche and a bocadillo in the village of La Marina. 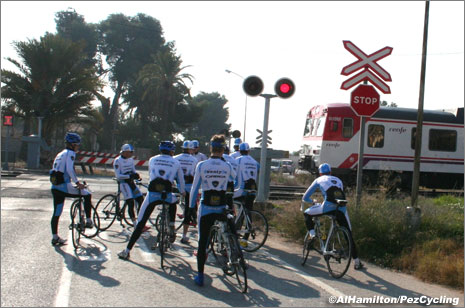 A team at the crossroads?

No expensive hotels (this year) for the team, they were staying in Torrellano, the home town of their Spanish rider; Rafa Rodriguez Segarra. The town is a stone’s throw from Alicante airport which will be very useful for Rafa when he is racing in the UK and the stage races the team is trying to schedule. I rolled up the high street of Torrellano forgetting how close the airport is, as a very large plane roared low overhead putting the street in shadow, the locals didn’t bat an eyelid as it probably happens every 10 minutes. 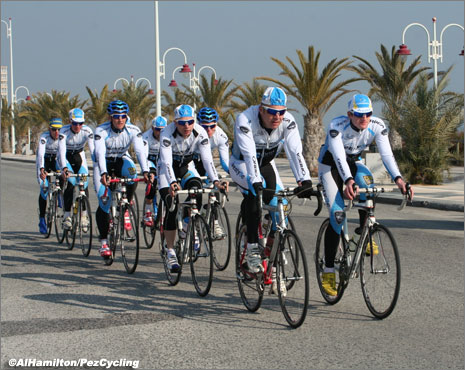 Down to the sea and the palm trees

I meet the lads at Rafa’s house, the plan was to ride towards the airport, skirt around it to the beach for some photos then follow the coast down to Santa Pola and then past the salt lakes at Brak del Port to La Marina. All went well after we were stopped at the railway crossing; there wasn’t much traffic so it was fairly easy for me to pass the team for some good photos even though there was a thick sea mist. The ride was to be an easy day, but it wasn’t for Steven Charles, one of the Sports Directors, he had come out for the ride, but had to get out of the way for the photos, so that also meant he had to chase to get back on every time, an easy day for the team, not so for Steven! 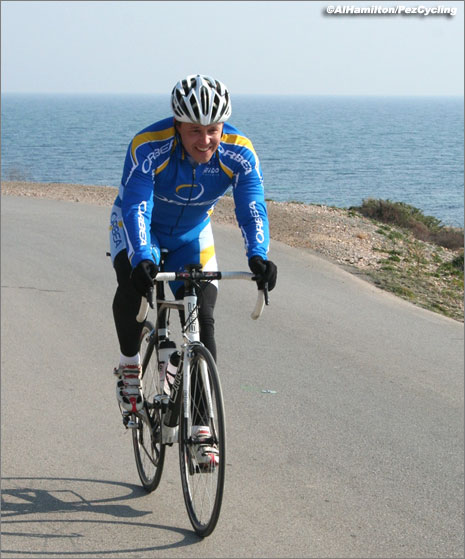 Steven Charles, a DS on a bike!

Once we were all seated on the terrace of the bar in some nice January sunshine it was time to get the low-down on the team: James Whatling is the driving force behind the team, he still races on the team at 36 as a 1st Cat, but more and more of his time is taken up by the running of the team and he can see a time when he will hang up his wheels to spend more time with the organization side of things, but would keep riding Cyclo-cross. He is behind the Orbea connection and had a big sponsor in his sights when it all fell through; this is when Twenty3c stepped up to save the day and the team. 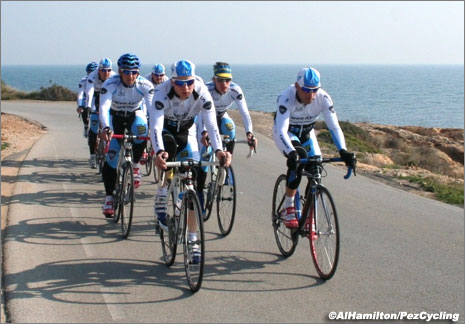 An easy day at the coast

The plan for the team is to get as much continental experience as they can, but there are a lot of other teams in Europe that want to start the same races. They should have been riding a short stage race in Northern France, but that and a few other races have been cancelled, so their first overseas outing will be in Ichtegem in Belgium, a long kermis style race with a big 85 kilometre circuit with six finishing circuits, a hard start. Many of the riders will be racing more locally from February on wards. 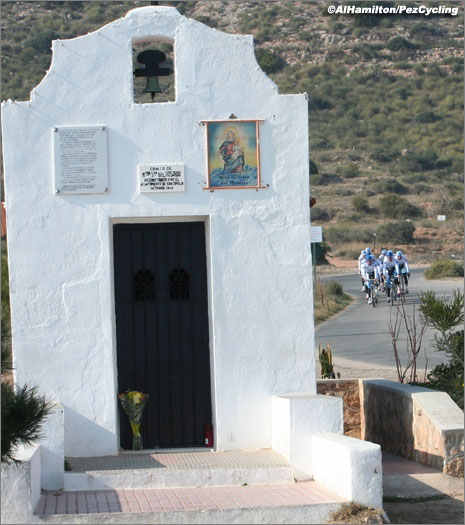 A little bit of Spain

On to the riders
I said the team was a mix of nationalities, but one rider is a mix of nationalities. Marcel Six has a UK and a Belgian passport, and as he had lived in Spain for over 10 years he could apply for one of those too! He lives in Hertfordshire, England at the moment, but has his feet in Belgium and Spain and speaks the three languages. Marcel’s father Roger, was a top rider in Belgium and would have ridden as a Pro had it not been for a car accident, and there isn’t a bad family connection as Roger’s cousins are Eric and Roger De Vlaeminck. Marcel returned to racing after two years out after a collision with a car, but it didn’t take him long to get his Elite license back, four wins in 2010 and a list of top placings puts him in the dangerous guy league and at 25 has a long career in front of him. 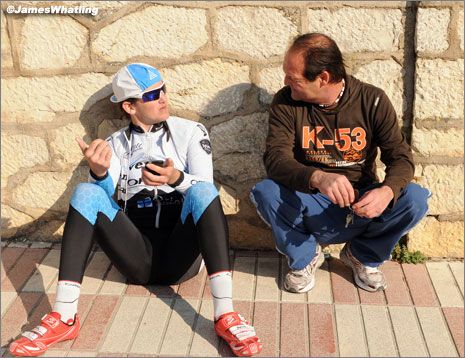 Rafa Rodriguez Segarra was a Pro with the Contentpolis-Murcia team in 2008, but as with many of the smaller (and the bigger ones) Spanish teams it didn’t last, he has since ridden for Supermercados Froiz, who are arguably one of the best (amateur) non-Continental teams in Spain, where he had some good top class victories. Last year he rode in the UK twice, winning once and coming second to Sky rider Alex Dowsett in the other. Rafa will be the man for Twenty3c-Orbea for the bigger races. Rafa’s English is not (yet) great but he can communicate with the team staff when he needs to and can always get Marcel to translate. I asked him a few questions:

PEZ: Why are you riding with a UK team?
Rafa: There are not many teams in Spain, there is only one ProTour, three ProContinental and two Continental teams registered with the UCI in Spain for 2011. There are a lot of Spanish cyclists with no team, so…

PEZ: Froiz is one of the top teams in Spain?
Rafa: Yes, but they are not interested in racing outside Spain, that’s why they are not a Continental team. It’s not important to them as the domestic Spanish season is big enough.

PEZ: Is there any difference between a Spanish team and Twenty3c-Orbea?
Rafa: No, I’ve not noticed anything, everything has been done that I’ve needed and they are looking after me well. 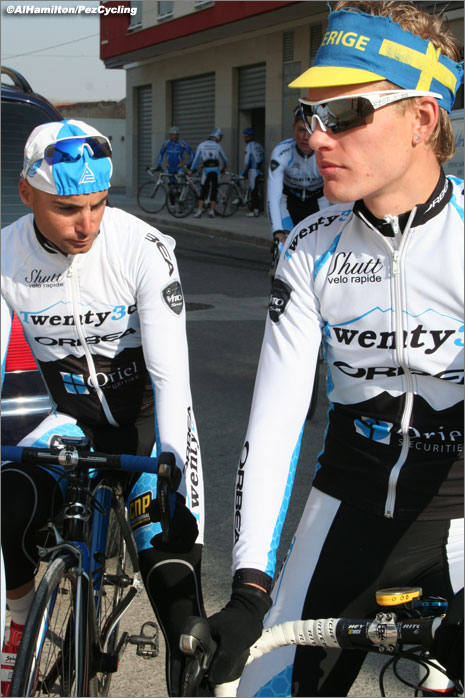 Gunnar Grцnlund rode mountain bike and represented Sweden before switching to the road. He lives in Derbyshire, England now and has previously ridden for Magnus Maximus Coffee in 2009 and for the Italian/English Pasta Montegrappa team in 2010, and at 23 he has experience and lots of time to show his strengths in the bigger races. 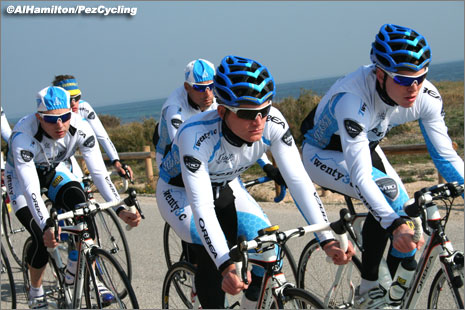 The other riders in the team are all from England: Lewis Atkins is 23 and had eight victories last year, he was bronze medallist in the GB national junior championships and due to his track experience he will be in the criterium action. Also for the circuit races is Dean Shannon who is a sprinter, lead-out man or solid team rider. Kristian Downs is on a comeback after studying till the end of 2009, his father; Bob was a very well know cyclist in the 70’s and 80’s, probably one of the most successful amateurs in Great Britain. Rob Sharman is a more “experienced” rider and has ridden the World Championships and the Commonwealth Games, many wins over the years including the Girvan 3 Day race in Scotland. Andrew Griffiths won the GB national U23 TT championships at the end of 2010 and is returning to the British scene after three seasons in Belgium, with Marcel their Belgian experience will be priceless. Daniel Shand and Mike Cuming both join the team after riding for Raleigh last year. Shand also has three years of Belgian experience with top teams Heist Zuiderkempen, Prorace Continental and Scott Cycling Team. We interviewed Mike Cuming at the start of last year, a broken wrist didn’t help his season, but he won the last Rudy Project TT event and several hill climbs after a fair first season on the road with the Pro’s. 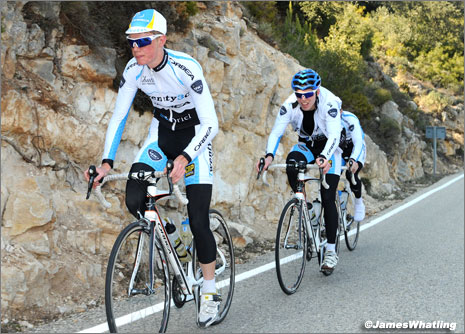 Mike Cuming showing he can climb.

Now to the elder statesmen on the team: As I mentioned before, Andy Lyons is no spring chicken, but he just can’t stop! He has won many top class races in Britain (over 40) and represented his country.

PEZ: How have you stayed keen?
Andy: I don’t know, I stop at the end of the season and within no time I’m itching to get back racing! I love it! If I stopped I’d only get in the way of the Mrs. I always need something to do.

PEZ: You’ve never considered riding age related events? You know, with guys your own age…
Andy: No, if I can still race with the young guys then I’ll stick with it as long as I can and if I can help the younger riders, then all the better.

PEZ: Are you a full time bike rider?
Andy: No, I’ve been a full time building inspector for 16 years; it doesn’t seem to have held me back!

The rest of the conversation was two old men (well me anyway) reminiscing over old times and riders we have known from the past. 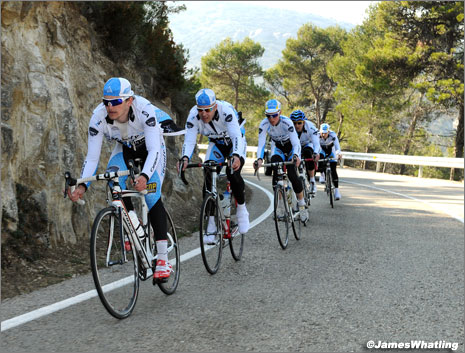 Last but not least is team manager/rider James Whatling, as I said earlier he is still racing at the same time as keeping all the plates spinning! The other riders think that this year he will get a win, maybe so, but he has enough on his mind trying to put a race schedule together with as much continental experiences as he can find. 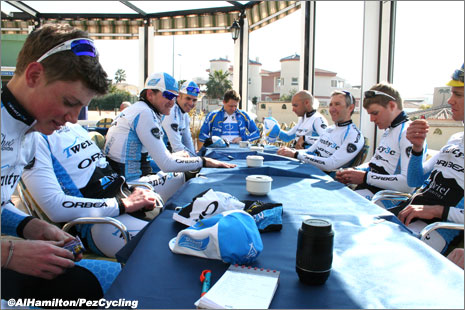 The lad’s wait for coffee under some winter sun

The “multinational” Twenty3c-Orbea team has youth and experience on its side and more importantly they have exuberance and an unboundable keenness for racing which hopefully will bring them the success and wins they deserve…Good luck and thanks for the coffee! 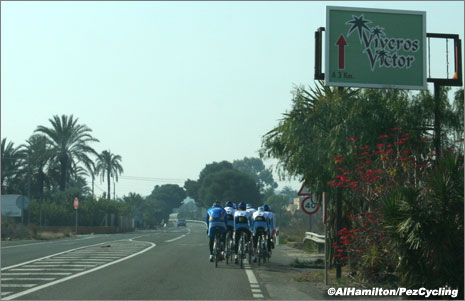 The Man Behind The Madison Music: Peter Traynor