When PEZ asked former British road race champion Hamish Haynes who were the dominant force in Belgian racing in 2010, he had no hesitation in replying; ‘Vacansoleil – if they’re riding it’s going to be a hard race.’ And it looks like they’ll be making it even harder in 2011 with additional sponsors, a move up the divisions, more riders, new bikes and a Grand Tour programme.

I was granted three hours leave of absence from my runner duties at the Rotterdam Six Day to pop round the corner to the Ahoy Conference Centre for the Team’s official launch. 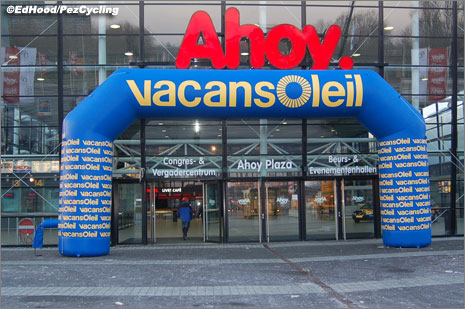 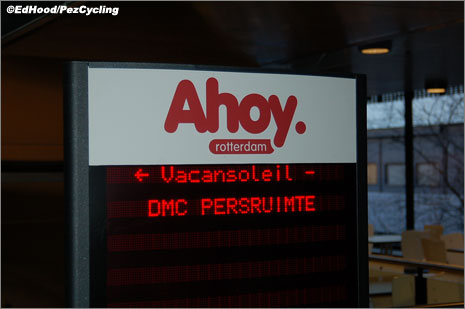 The venue for the first part of the day’s proceedings was the upmarket Ahoy Brasserie – the press had unrestricted access to all of the staff and riders. 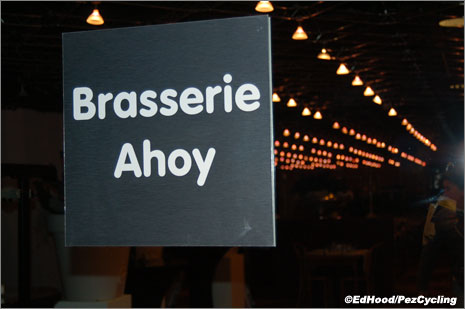 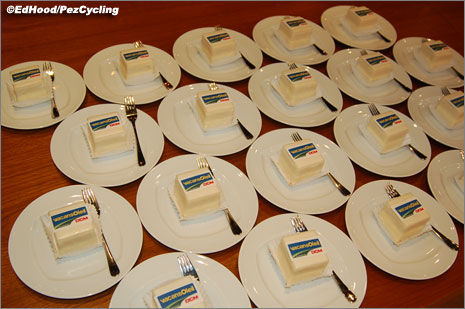 Definitely in the right place.

After I’d had my coffee and Vacansoleil cake (delicious) I scanned the room, the riders slouched and chatted amongst themselves waiting for the inevitable idiot questions; ‘is the Giro important for you, Riccardo’ was one. 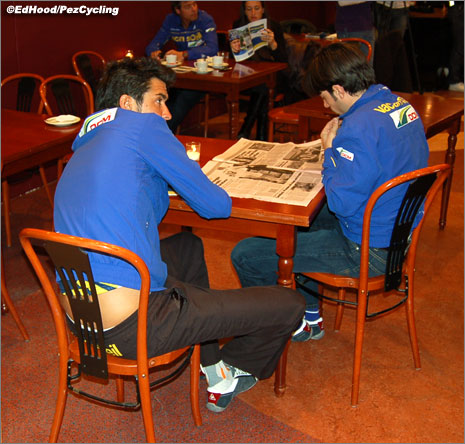 The energy was overwhelming.

They reminded me of schoolboys trying not to catch the teachers’ eye.

My criteria were, whose cool ? who speaks English ? and who doesn’t look like they’re attending a funeral? Former Slovenian champion and Vuelta stage winner, Borut Bozic is cool, quick, speaks good English and smiles a lot. 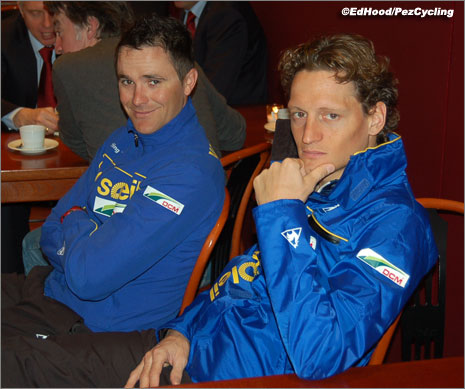 Borut Bozic sits next to a very intense Alberto Ongarato.

He was just back from 20 days training in Tenerife after an off season of gym work.

‘I use SRM cranks as a training aid, but so far I’ve really just been working on base with a little, really hard work coming now that the season is close.

I go back to Tenerife for another 10 days after this launch and will be doing final preparation for my first races. 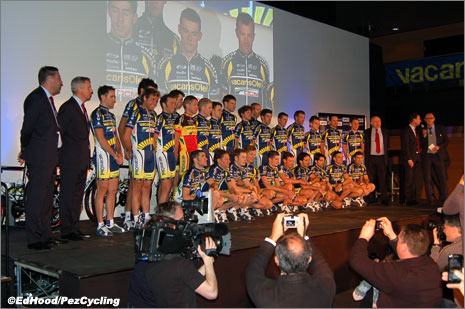 The step up from Pro Continental to Pro Tour is a big one but we have a strong team and will be ready for it. For me, the first part of the season is about Milan Sanremo, it’ll be the second time I’ve ridden, but the first time was with a small team and I didn’t do anything.

Gent-Wevelgem is another race I’d like to do well in – and if have good form there, I’d like to ride Flanders. 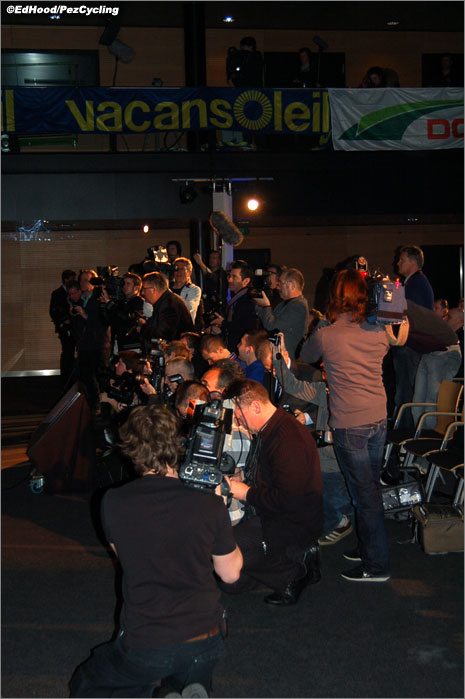 The media showed up in full force.

As for Grand Tours, my dream is to ride the Tour de France – but it’s also the dream of everyone on the team!

For later in the season I’d like to do well in the World Championships in Copenhagen; that’s a big goal – but this is out first year at this level and you have to take it step by step.’

I’d seen Borut at the six the previous evening and asked him if it’s something he might like to ride himself, one day ?

‘I’d never seen a six day before, Marcato and I went to see it – it was nice. I rode the track in Slovenia when I was young but not so much because there’s only one track there. I’d maybe like to ride sixes one day but the season is so long now and you’re far from home – you need to spend time with your family in the winter. 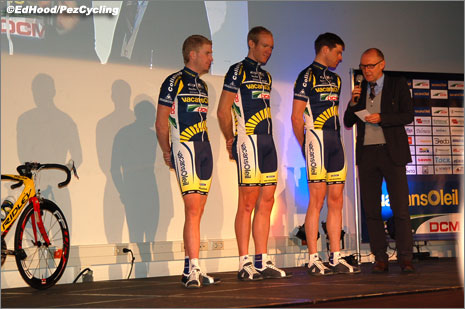 Tall Amsterdam pursuit rider Jens Mouris didn’t have far to come to the presentation – he’s riding the six, just around the corner.

‘The team launch isn’t too much of a distraction from the six; I’m not riding a lot of sixes, I rode the track Nationals but I really want to prepare well for the cobbled classics. I’ll be riding races like De Panne and the Three Days of West Flanders.

After this six I go back to our training camp in Spain; my first race is the Tour of the Med. 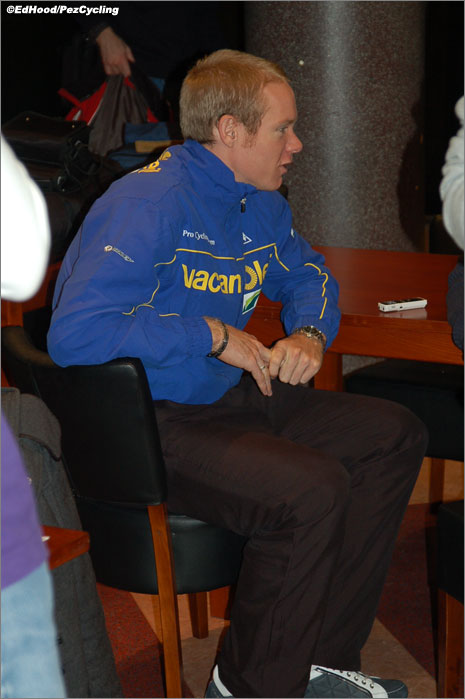 Because I’m doing the Classics season, I won’t be riding the Giro but I’d love to ride the Tour, if I’m capable.’

With a Worlds pursuit silver and good prologue performances to his credit, I asked Jens how much part prologues play in his programme. 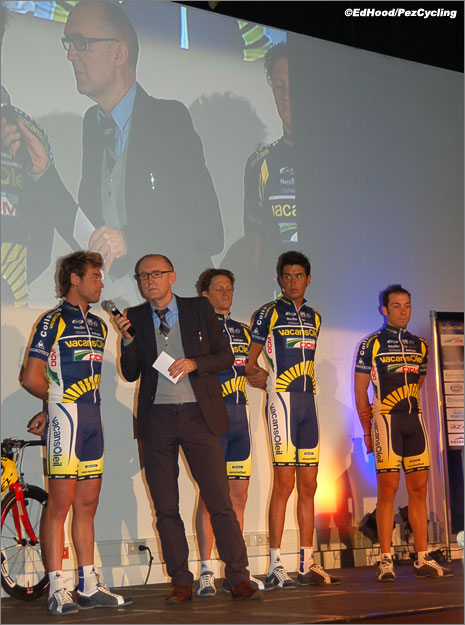 ‘There’s not so many short prologues to go for; if I’m preparing for a prologue then I tend to do it on the track, it’s easier to make the intense efforts there.

My job is to work for Leukemans and Devolder in the big races and go for results of my own in some of the smaller races. 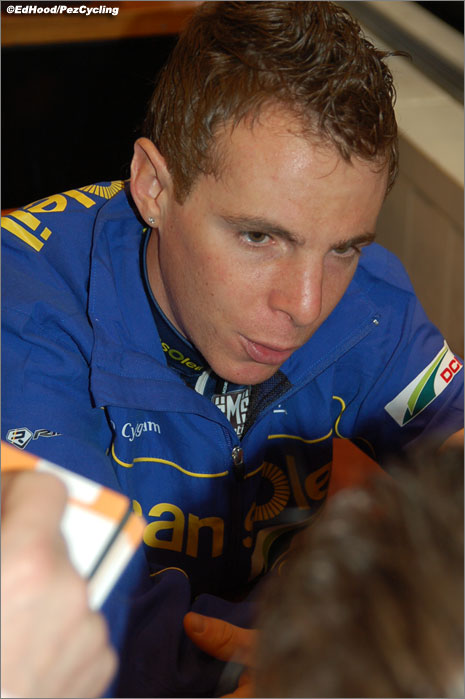 Riccardo Ricco didn’t have much down time at the presentation.

We’re lucky that we have leaders for all types of races – and that all of them want to win !’

I ear wigged a little on a translation that Borut was doing for a Dutch journalist – trying to get some interest from The Cobra – from English to Italian; ‘all races are important to me but as an Italian the Giro is very important.’ 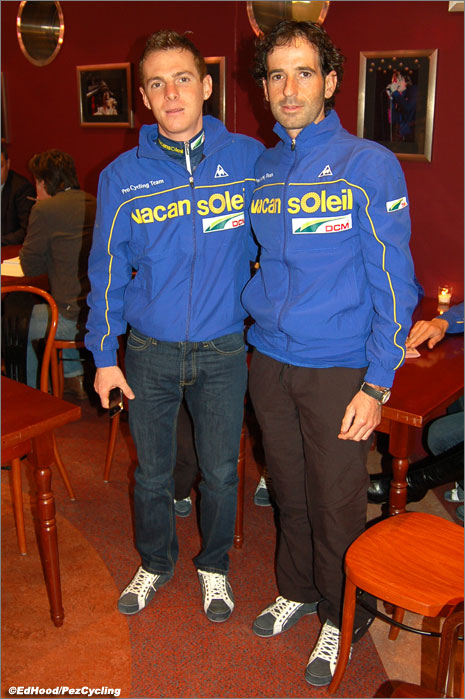 Two of the best and most controversial climbers in the business – Ricco and Mosquera.

At that, an Italian journo arrived, Riccardo jumped to his feet with a ‘bravo!’ as if to say; ‘save me from this lot !’

Ezequiel Mosquera was looking so sad that I thought I’d better try a few questions, my Spanish is non-existent and my grasp of his native Galego – the language of Galicia – is worse than that but we got by. 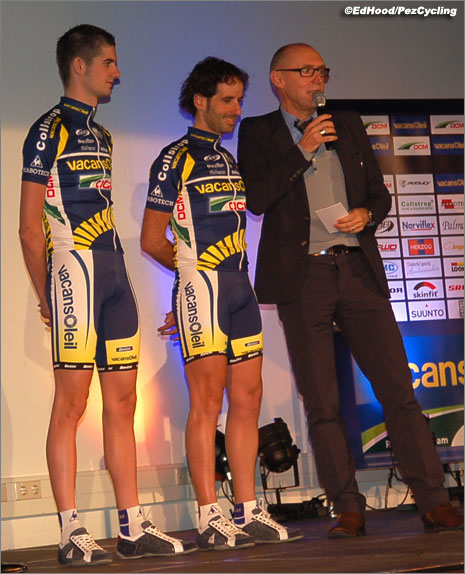 Mosquera’s future is still very hazy with his positive for hydroxyethyl starch still hanging over his head.

‘I’ve just had a collar bone operation – I raced all of last season with it broken; so I’m a little behind with my training.

I’ll be talking to management about my programme within the next few days.

Riding for a northern team is a new experience for me, my impressions of the riders and staff are very good.’

I didn’t mention the ‘D’ word,’ he looked wistful enough as it was. 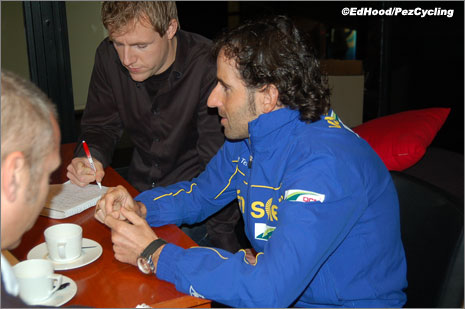 Johnny Hoogerland has been around a while but it was only in 2009 that he began to realise his potential. Last season was compromised by a bad crash in Paris-Nice but the form returned for the autumn; among his strong results was a win in the king of the mountains in the Tour of Poland. 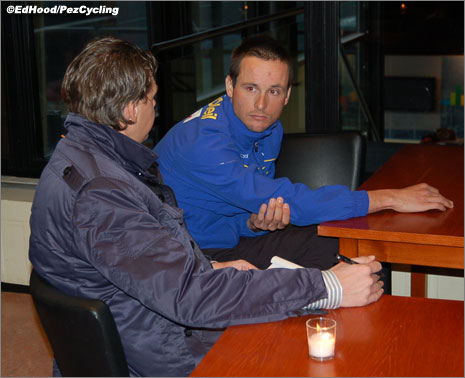 Johnny had looked a bit bored by proceedings earlier in the day, I opened by asking him about this.

‘No, I like press launches, it lets me practice my languages – but it depends who I’m speaking to!’

Fortunately, Johnny is a fan of the Tour of Britain, particularly the Scottish stages – so no boredom problems for Pez.

‘I trained in Spain for eight weeks but was home for Christmas and New Year; up ’til now I’ve done around 7,000 kilometres.

I did a lot of power work in the mountains; I don’t do gym work, but in the house I use the big ball for flexibility. I don’t have the patience for the gym, waiting on machines and all that stuff. 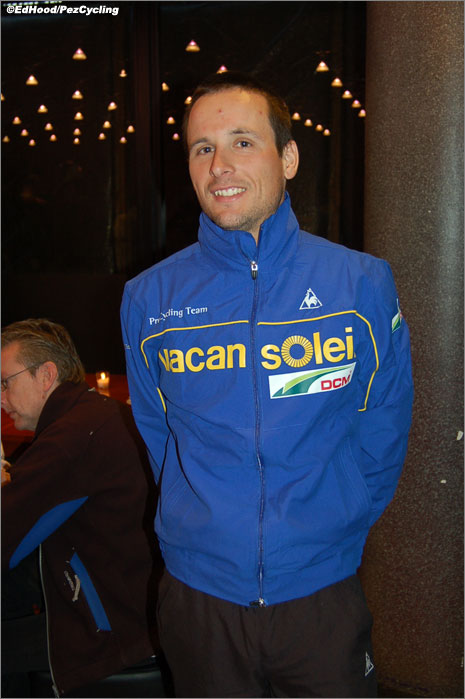 With the snow over Christmas I did a lot of work on the mountain bike; in fact, from December 20 to January 3 that was all I rode, you can go into the forests and it’s not so cold.

I start at the GP of Marseille then do Bessиges, after that I have a two week training camp then the Ruta del Sol.

I’m not doing the cobbled classics, my first peak is for the Ardennes Classics, and if my condition is good after that I’ll go to the Giro for Ricco.

To get condition for the Ardennes I’ll be riding the Tours of Catalonia and the Basque Country. 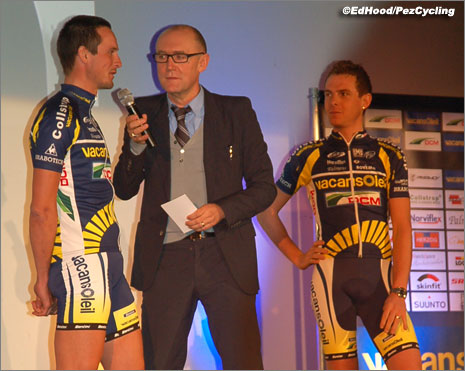 Hoogerland and Ricco got off to a rocky start, but they seem to be on good terms now.

The plan is for me to ride the Tour as well – that will be for myself; not for GC but to show the jersey and go for stage wins.

I think with five weeks between the Giro and Tour it’s possible to recover.’

I put it to him that with Devolder, Leukemans, Ricco and the rest there are a lot of ‘chiefs’ in the team. 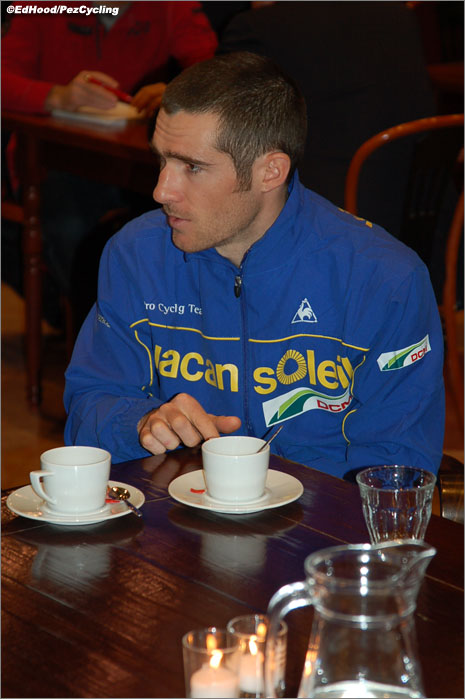 Fastman Romain Feillu, will be looking to return to the form that netted him the yellow jersey at the Tour de France just a couple years ago.

‘It’s not a problem, they all have different characteristics and ride different programmes.’

And what about the new hardware ?

‘The Ridley is awesome, I’ve had it since the end of November, it’s perfect, a real machine!’ 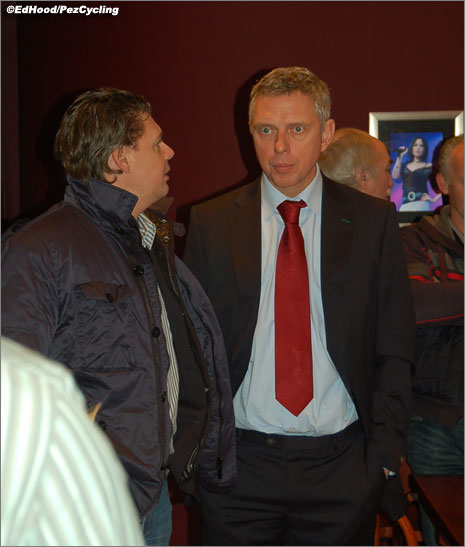 Jean Paul Van Poppel was one of the big hitter sprinters ‘back in the day’ – he’s progressed to DS at Vacansoleil via Cervelo.

‘The team has moved up a division, on the one hand that means more work but on the other hand it means our programme is guaranteed, it makes it easier to plan. At Pro Continental level sometimes you don’t know where you are riding until late in the day. But maybe that was part of the power of this team, that desire to race and ‘show’ is something we don’t want to lose.

Sure, the team has many leaders but it’s a privilege to be in that position; it’s good to know that you have a team that’s able to do all of the races – Classics and Grand Tours.’ 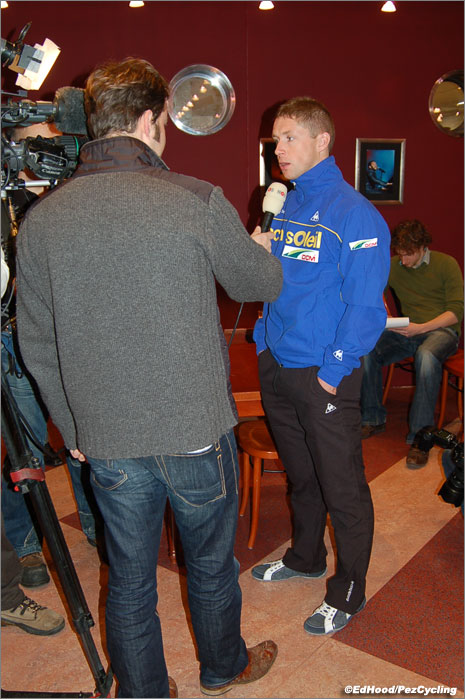 The man most in demand at the interview session was Belgian road and time trial champion, Stijn Devolder. But perhaps more famous as twice winner of the Tour of Flanders. For one of the toughest of tough men, he’s soft spoken, polite and humble – but for all of that, he still has the aura of a star. 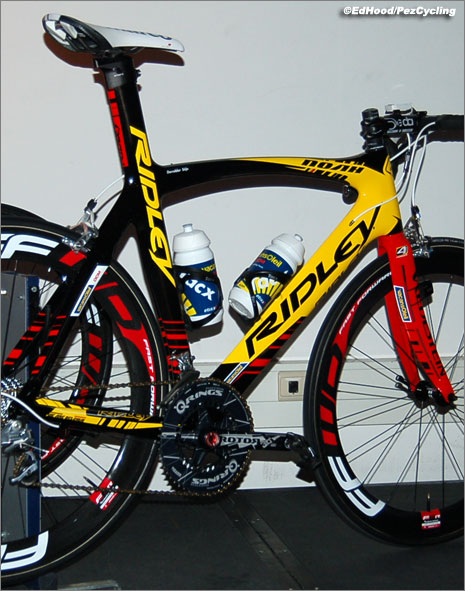 ‘It’s a fresh start with Vacansoleil, it’s always a boost for the morale when you go to a new team. And this is a very ambitious team which has moved quickly up through the divisions.’

I asked him about the pressures of being a big name in Belgian cycling.

‘It’s hard to win with the newspapers, you take victory in Flanders and they say; “but he should have won Roubaix as well !” then you win two Belgian championships and they say: “ah! but he didn’t win Flanders!” 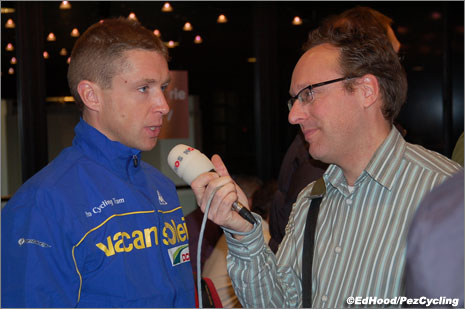 My intention is always to win one big race each year, the pressure from the media is just something I’ve learned to live with.

My goals for this year are the same – the Cobbled Classics, Flanders, Roubaix . . . 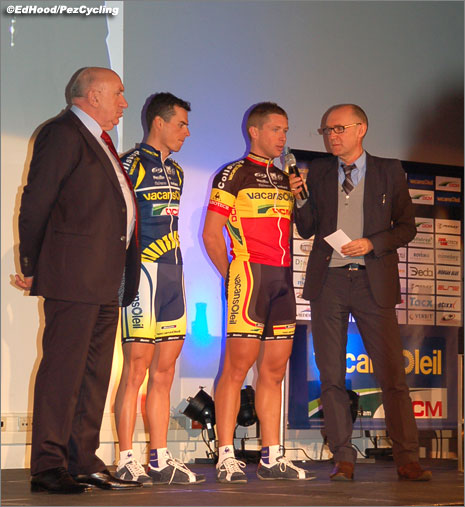 At that an agitated fellow interrupted; ‘you must finish now! Stijn must talk to the TV!’ 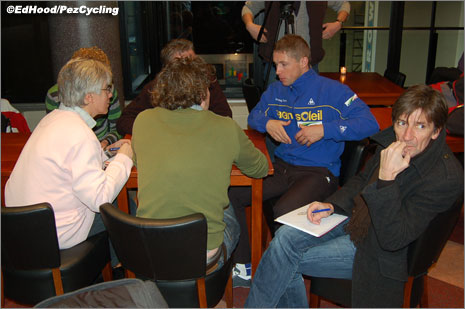 I liked the fact that he did all the TV interviews with his hands firmly in his pockets – relaxed, just part of the gig.

Then it was time to move to the big auditorium where the riders were presented on stage in little groups in team kit, on stage. 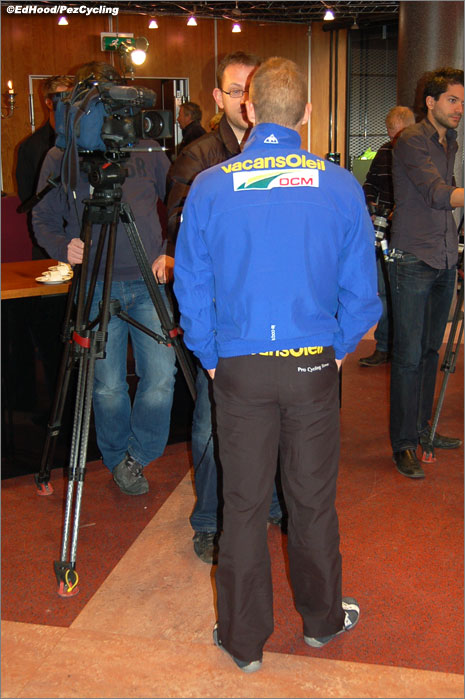 Thighs of the day – Stijn.

Haircut of the day – Matteo Carrara.

Man you’d least like to mess with – Russian, Maxim Belkov.

For ‘real’ journos it was fine wine and delicate starters time; for runners it was time to go and do the shopping.