PEZ On The Scene: Vuelta a España ’11 Presentation

Our man in Spain; Alastair Hamilton normally reviews the La Vuelta a Espaсa route from his local bar, but this year those nice people of the Vuelta organisation have moved the presentation nearer his house so we sent him out to see what was going on in Alicante and the “2011 Vuelta a Espaсa”

Normally the Vuelta a Espaсa route presentation is in Madrid to make it easier for the National TV station to transmit live and all the other media I guess. As this year’s race is starting in the beach resort of Benidorm and the local “Diputaciуn de Alicante” or local Government were footing the bill, the presentation would be in the newly built, and in places un-finished; Auditorio Provincial de Alicante. The presentation was originally to have been held the previous month, but there might have been some plaster dust in the cocktails if they had gone ahead with the earlier date! 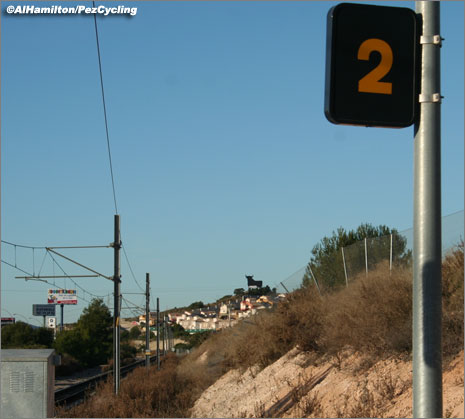 Alicante is like many modern cities, terrible to drive through and impossible or expensive to park in, so in an attempt to make my “carbon footprint” a little smaller and to cut the expenses claim from Pez, I caught the train…well I say train, its rather small and they call it a tram, but it travels up and down the coast at half hour intervals and rather nice it is too…and cheap! From the station it was only a short stroll up past the Plaza de Toro’s to the auditorium. 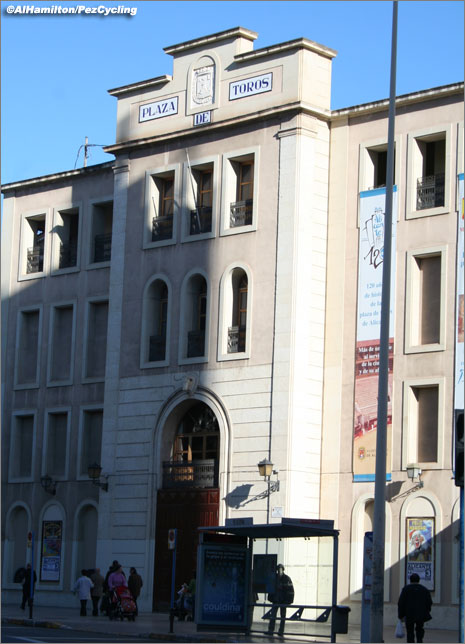 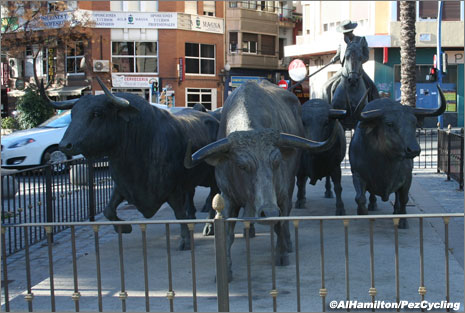 Although the building is not quite finished it is a very nice building, which got to look much nicer after the free nibbles and cocktails. The first thing you notice in the auditorium is the clear seats, very odd, not sure women in short skirts would feel too confident. 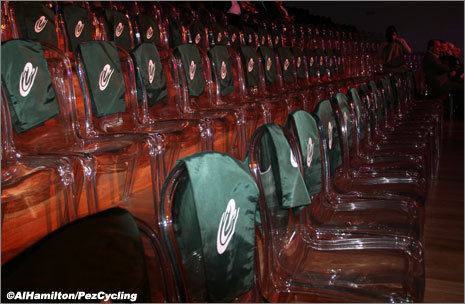 First to arrive were the top men from Euskaltel-Euskadi; Olympic Champion Samu Sanchez and Igor Anton along with the team manager Igor Gonzalez de Galdeano, they were soon joined by World No. 1 Joaquin Rodriguez of Katusha with his boss Andre Tchmil. 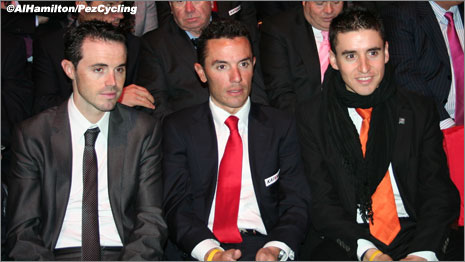 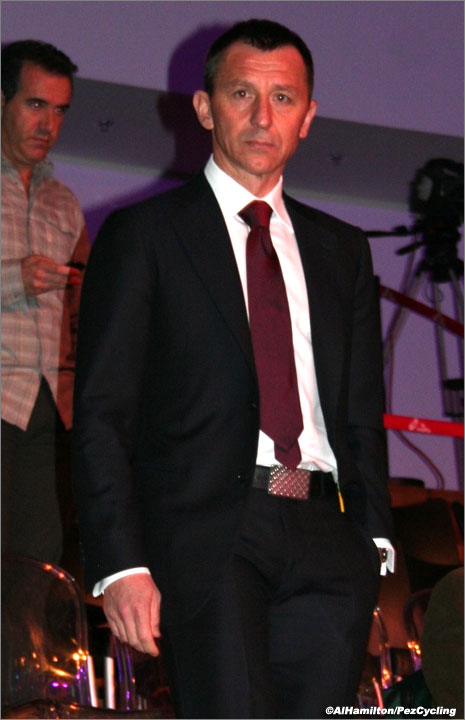 Along with the other Katusha’s was Alexandr Kolobnev, he seems to be happy all the time. He has a house up the coast from Alicante and I see him training regularly in the area, the Katusha team have been based in Calpe on and off since December last year and are training there now. He had asked me to e-mail a photo I had taken of him and his son at a stage start of last year’s La Vuelta, he remembered and was, as usual, very happy about it. Next in was last year’s Vuelta winner; Vincenzo Nibali who is the opposite of Kolobnev and never looks that happy! 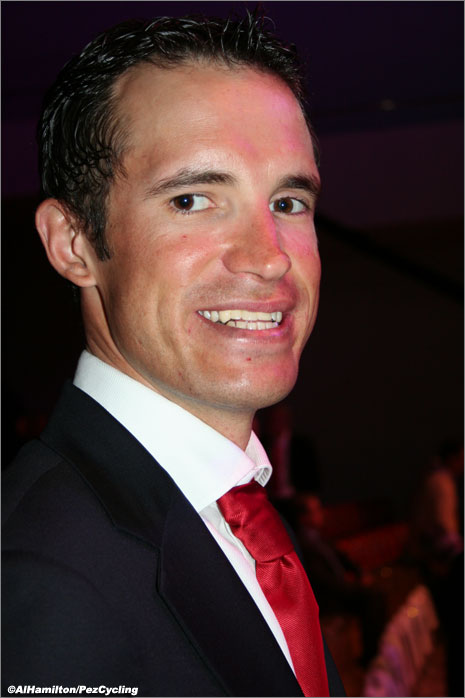 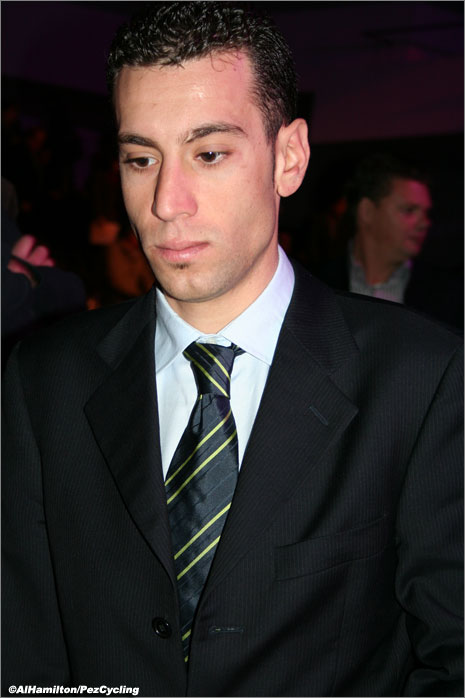 As the auditorium filled up with invited guests two front seats were left empty and the name tags were Carlos Sastre and Denis Menchov, they were to be training in Tarragona with their new team Geox-TMC in the north of Spain, so could be late. Sastre rushed in at the last minute as the TV people were getting things together. The Menchov tag was removed and David Millar was promoted from the third to the front row and it was time for “cameras-action!” 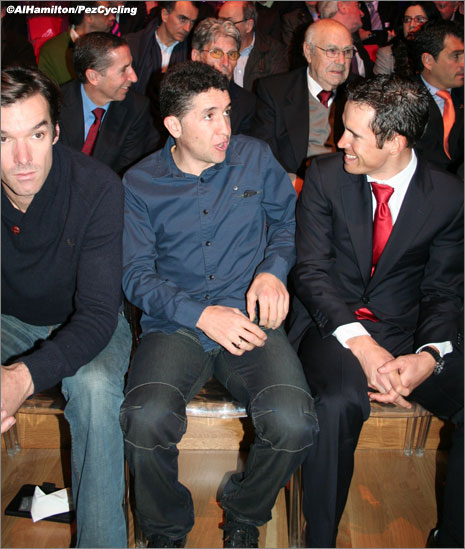 After some promotion film of the Costa Blanca area and a rйsumй of last year’s race it was time to see a display of this year’s race, first with the details of all the stages, before splitting the race into three sections to be discussed with chosen riders. First up was Carlos Sastre to look at the first seven stages; “There are two time trials, one in Benidorm and one in Salamanca, but there’s enough ground to be able to make up time in the mountain stages.” He added that; “I think it is a hard route that is similar to last year’s. It’s a Vuelta for climbers. The three organisers are determined to make the races for climbers, and I’m really grateful for that. The heat made a strong presence at the start of last year’s Vuelta and that could well happen again this year. Sierra Nevada will be really important and a solid leader will come out of that. The Angliru is spectacular; at the end of the race, we won’t see too many changes to the classification but it will be very important nonetheless.” 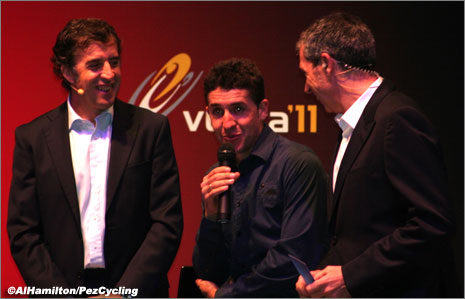 Next up was Samuel Sanchez and Joaquin Rodriguez, Tour winner and TV pundit; Perico Delgado pointed out that they were both “very thin for January and they should put on some fat!” Sanchez said he should talk to his boss about that. Their take on La Vuelta was similar to Sastre, Sanchez pointed out; “There are only 40km against the clock and the time trial is in the second week, so there is no real chance to get back two or three minutes. It’ll be an open race, which is not too hard but we’ll be climbing for an hour on stage 11 to Manzaneda. The finish at Lagos de Somiedo is short but hard. It climbs 1,500 metres in just eight kilometres. That’s very tough.” Delgado joked with Rodriguez about the long time trial and asked if he was trying to improve in that department? “It’s not so easy for me!” he answered a little bashfully. He added “Stages like the one to Ponferrada are difficult to control and so a rider who perhaps is not in the leading positions could get away and become a danger.” 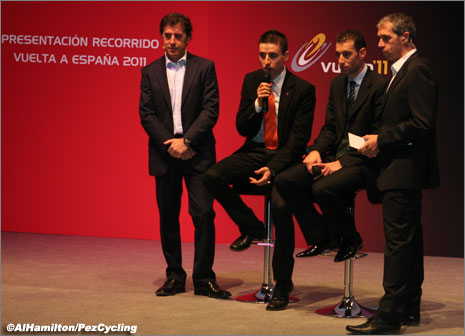 To discuss the last week, 2010 Vuelta winner Vincenzo Nibali and Igor Anton took the stage. Anton had been leading last year when he had a horrendous crash shredding his clothing and finishing victory hopes, he said of this year’s course: “I hope this time to reach the Alto de Angliru!” although he did point out “The middle week will be important because it will tire riders a lot. I will try to be at my best because these mountain stages could decide the race.” He is also very pleased with the return to the Basque Country after 33 years as the race will pass through his home town. Nibali saw that this Vuelta will be hard from beginning to the end and especially the finish on the summit of the Sierra Nevada. And the last stage into Madrid? “It’s wonderful to race into the historical City of Madrid.” 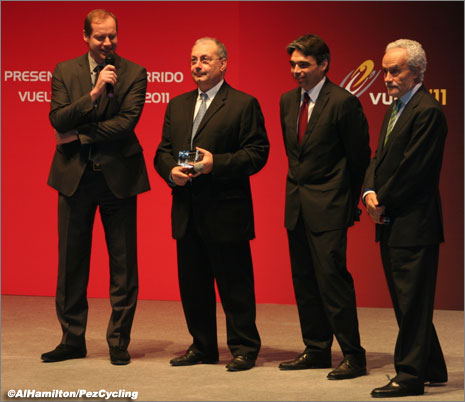 It just left time for a surprise presentation to ex-Vuelta Director General; Victor Cordero for his work in cycling over many years. The presentation was made by Tour and Giro Directors Christain Prudhomme and Angelo Zomegnan to a (for once) speechless Cordero. 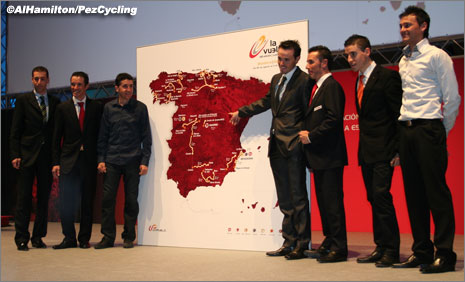 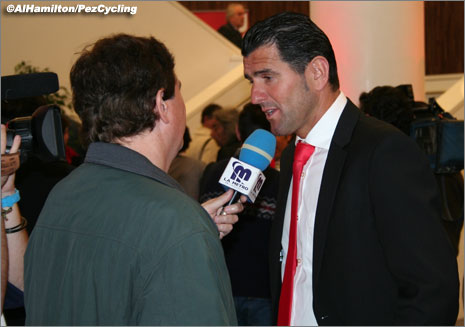 The live TV wound down and there was a mad rush for photos of the riders with the big map of the race route. A few of the other TV crews had some interviews to conduct with riders and the organisation, like Abraham Olano and then it was the most important part of the day. Yes! The free food and drink! 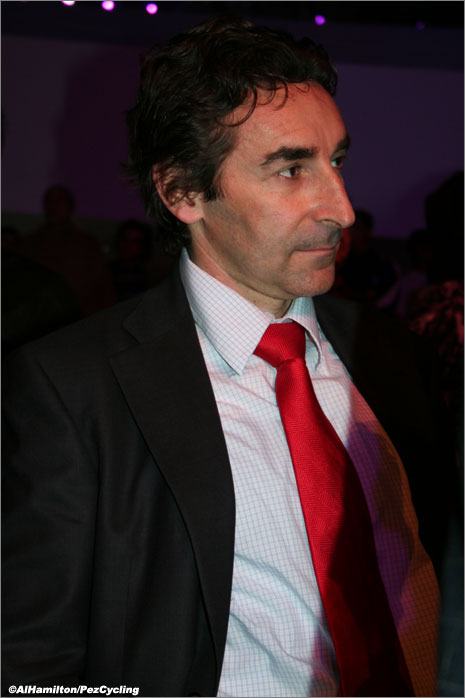 On the way up to the “Cocktail Lounge” I spotted retired climbing ace Fernando Escartin who still looks like he could make a few legs hurt and of course Perico Delgado is still very popular with the fans and had a queue of people wanting autographs and photos with the Tour and Vuelta winner.

The menu was the usual fare of these events in Spain; soft drinks, beer and wine with so many different “tapas” I couldn’t list them or eat them all, but the wine made the tram journey home that little bit more special, trundling past the sun stroked beaches with people swimming in the sea even at this time of year, through the orange and lemon groves and….oops, nearly missed my stop! 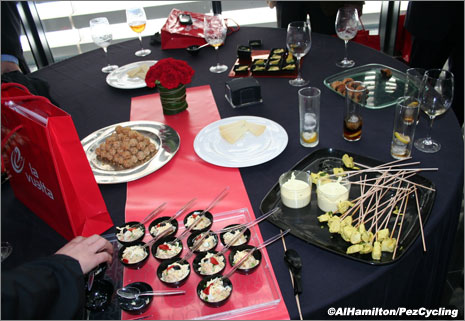 It’s a good Vuelta route, lots of hard climbs and the time trials won’t dominate the result, the stages are spread out, but the race visits many parts of Spain for the first time and some known favourites. Stay PEZ for a more in-depth review.