Eight sectors of gravel road, dust and hills. That’s the Strade Bianche in one short sentence, but it’s so much more. It’s the rolling green hills of Tuscany, the ancient towns of Gaiole and Siena, the passion of the tifosi and the atmosphere and excitement that simply oozes from this race. Ahead of Saturday’s 2013 race let’s take a look at some of the best images from the last few editions of what is arguably the Pro Cycling Calendar’s prettiest race of the year. 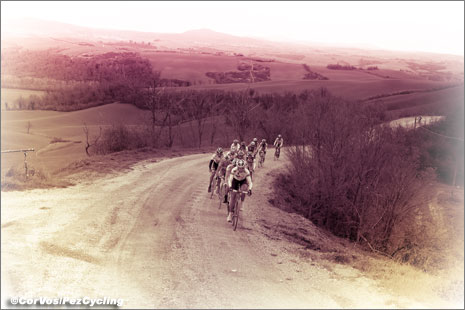 With its ancient gravel roads and ‘classic’ feeling it would be easy to think that the Strade Bianche has a 100 year history behind it, but no the first edition was only in 2007. 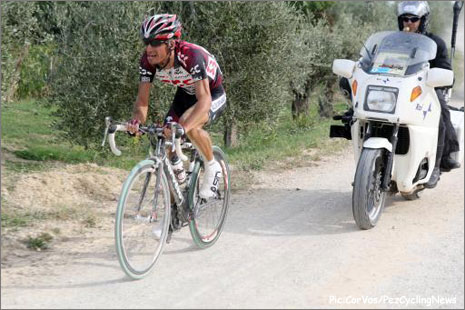 The winner on that October day in 2007 was Alexandr Kolobnev but he didn’t hold the title for the full year as from 2008 onwards the race has been held in March – just before the Tirreno Adriatco. 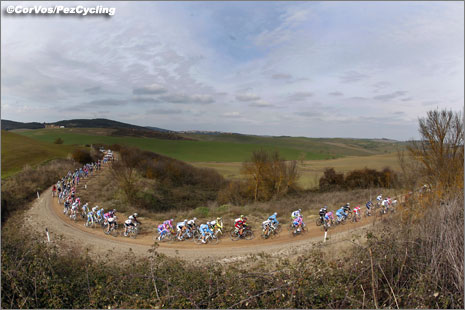 No matter what time of year the race is on, a peloton at full speed on these ancient roads truly is a beautiful thing. 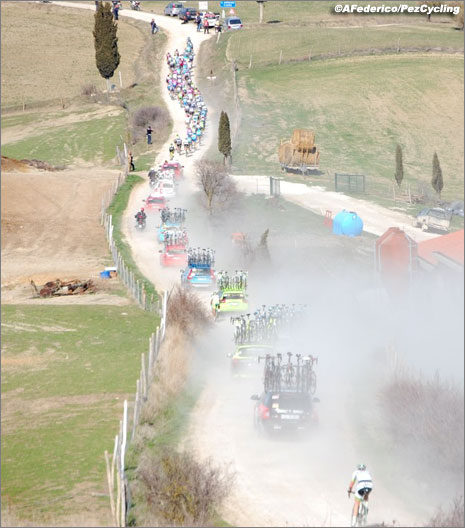 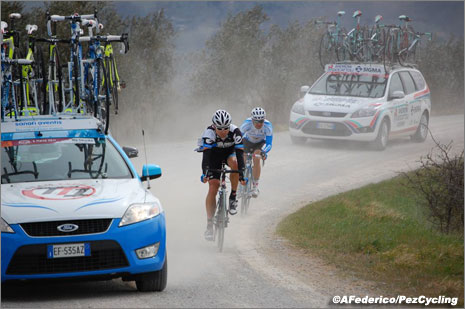 It’s not such a beautiful race if you get dropped or have a mechanical though as you fight your way through the convoy’s dust storm and flying gravel chips. 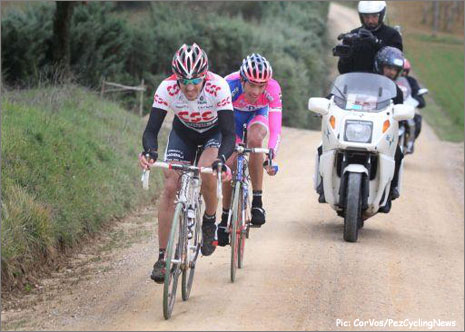 Fabian Cancellara towed Alessandro Ballan around the closing kilometers of the 2008 edtion and still had enough to outsprint the Italian at the end. 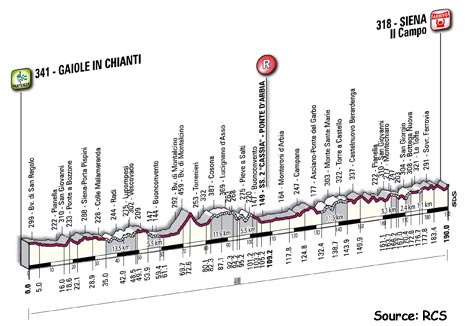 Before the 2009 edition the race gained another gravel section and 9 more kms to bring the total to 190kms. The same route that the race will use this coming Saturday. 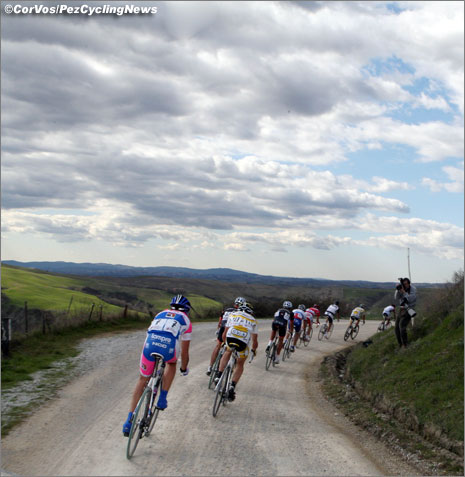 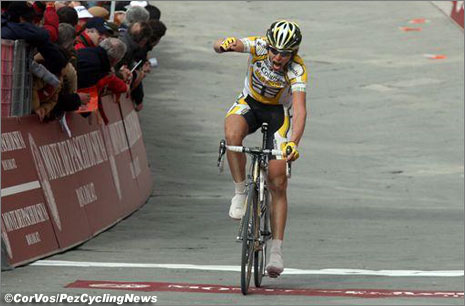 In 2009 Thomas Lövkvist surprised the big favorites and himself taking his first professional one day win with a storming ride. Lövkvist’s new IAM team will be racing on Saturday, but not Lövkvist who is instead choosing to concentrate on Paris-Nice. 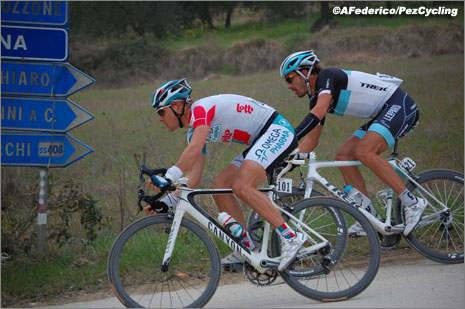 Another former champion not competing on Saturday is Philippe Gilbert. The 2011 champ’s BMC team is sending a very strong squad though with Greg Van Avermaet, Taylor Phinney and Cadel Evans. 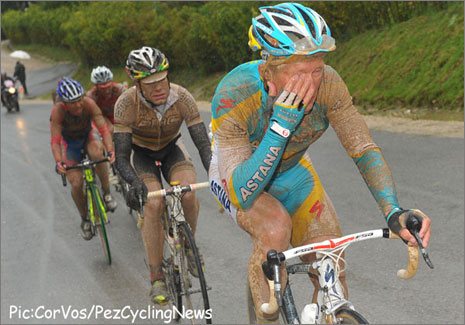 And speaking of Cadel, he may never have won the Strade Bianche but he did win one of the most epic Giro stages ever in stage 7 in 2010 that was held on the same roads as Strade Bianche in atrocious conditions. Look to the tough Aussie for a big performance on the weekend. 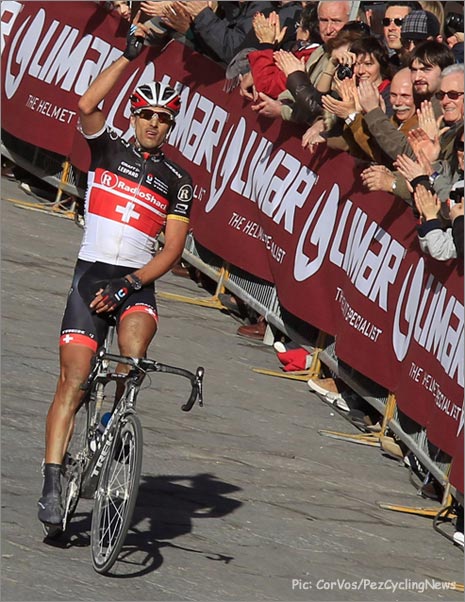 For big performances though all eyes will be on Fabian Cancellara. As the only man to win the Strada Bianche more than once the defending champ Cancellara goes into the event as a clear favorite. 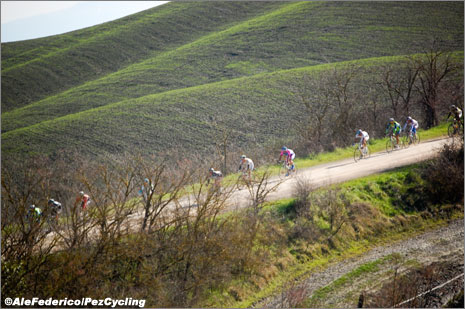 It’s not just his strength that makes Cancellara the favorite, it’s also his bike handling. Many of the splits are made on the descents where a steely nerve and superb handling skills are a must. 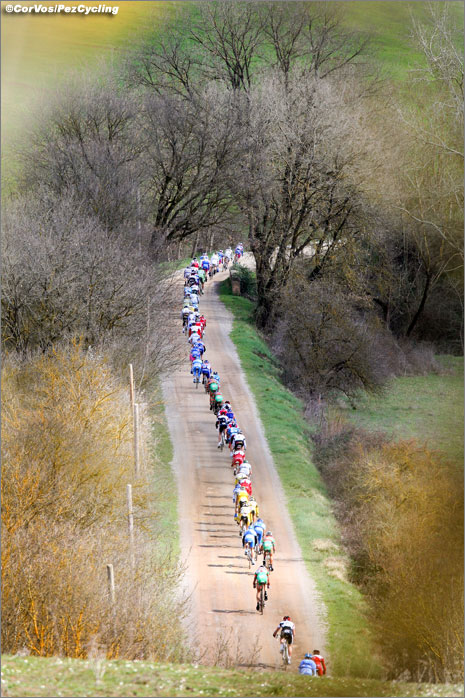 On the descents the peloton is strung out in a long line and if somebody loses the wheel in front or crashes your race could be over. 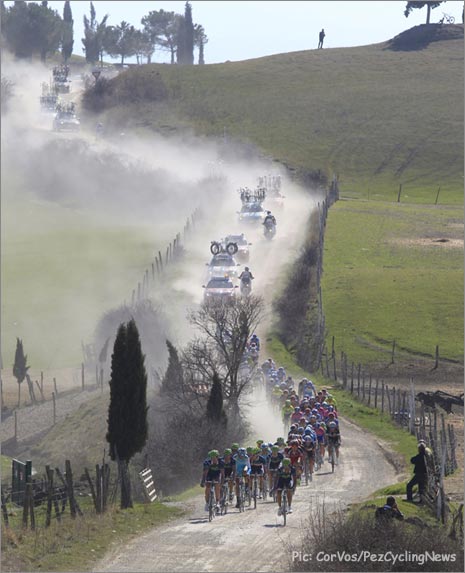 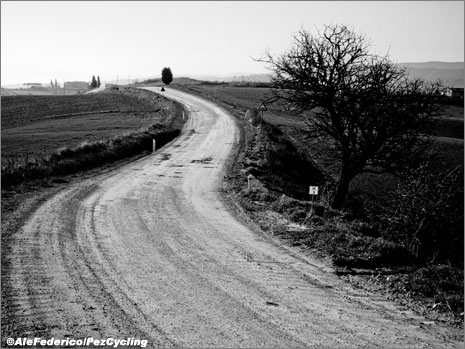 For all things Strada Bianche keep it tuned to PEZ on Saturday for a full race report, big color PeloPics over the weekend and then Ale’s roadside report during the week.