Some guys dream of starting a UCI Continental team – others just go out and do it; and it doesn’t have to be in the ‘Heartlands’ of Flanders, Tuscany or Brittany. PEZ caught up with Gary Hand, from Livingston in Scotland about how he has put Scotland’s first UCI Continental team, ENDURA RACING – on the road.

PEZ: Whose idea and why, Gary?
Gary: Jonathan McBain, the owner of Pedal Power Cycles, and I first discussed it in 2007, but we decided to take it one step at a time.

That’s why in 2008 we had the Pedal Power-Endura amateur team competing in Scotland and in the top English events.

We wanted to demonstrate first of all that we could ride as a team – which I think we did successfully. 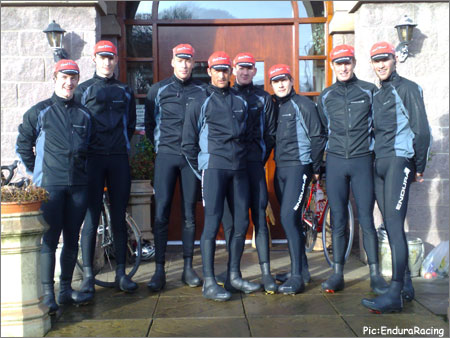 The 2009 Endura Racing team in their Endura gear.

PEZ: How close are you to the UCI ‘rubber stamp?’
Gary: We’ve been approved by British Cycling – and that’s probably the most difficult part (at least two teams which applied to British Cycling for consideration as Continental squads for season 2008 were rejected at that stage.)

We hope to hear a final decision in early January.

PEZ: Tell us about the UCI’s rider parameters for ‘Continental’ status.
Gary: You should have a minimum of eight, maximum of 16 riders, there is an age criteria – to encourage squads to have young riders, but they really only apply that if the country in question is running up to it’s limit number of Continental teams.

As for the quality of the riders, British Cycling make that decision, it’s they who know the riders ‘on their patch,’ – not the UCI, who can’t be expected to know about every rider in every country.

That said, all the riders have to be Elite status, or in some cases, first category. 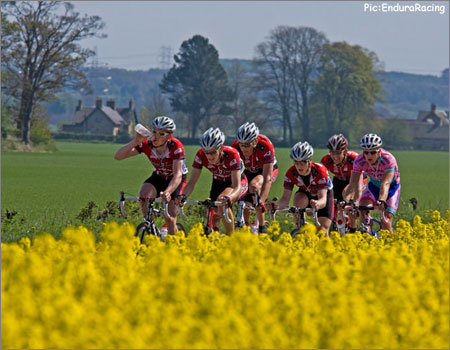 PEZ: What are the financial considerations?
Gary: If I was to go into detail with you on that, it would take the whole interview!

But we had to pay British Cycling just under 5,000 Sterling, some of that stays in the UK, but most goes to the UCI to cover admin and licences.

If you are a Continental team then you don’t have to pay wages, but you still have to lodge a 20,000 Sterling bank bond to prove that the team is legitimate and it’s also there to indemnify any fines which the team might pick up. 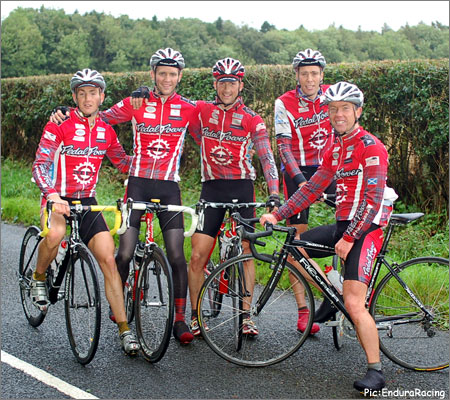 The team hopes to make a seamless jump from the amateur to professional ranks in 2009.

PEZ: Who are your sponsors and what’s in it for them?
Gary: Endura are a cycling clothing manufacturer, here in Scotland. They would love us to get into the Tour of Britain – that would give them excellent exposure, with the race being televised now.

They also want to move into new market places, as well as using the team to test new product; which is an exciting aspect for the riders.

Extreme Nutrition are a sports nutrition company, they specialise in products for body builders and cage fighters (!), but want to break into other sports – they want us to get their name out there.

And of course, there’s Pedal Power Cycles – best mention them or I’ll be out of a job on Monday! 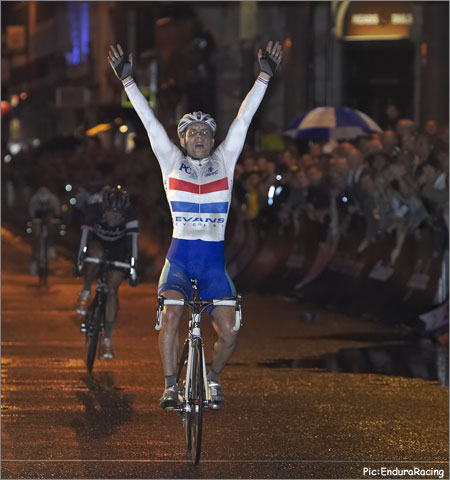 PEZ: Riders?
Gary: We have James McCallum who was 2007 British criterium champion and a medallist in the Commonwealth Games. 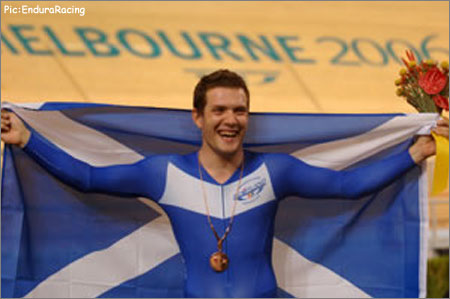 We also have Duncan Urquhart, who has won Premier Calendar races in England and who has been given two years leave of absence by the British Army to prepare for the Commonwealth Games; Dave Smith, who has been racing in Lyon for the last three years and Gordon Murdoch who was the dominant figure in Scottish road racing in 2008, to name but four. 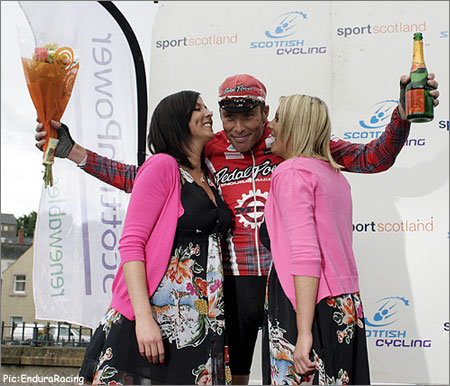 Gordon Murdoch: the dominant figure in Scottish racing in 2008.

(Gary is too modest to say that along with Murdoch, he was one of the strongest protagonists in Scottish races during 2008 and also rode well in top English events.) 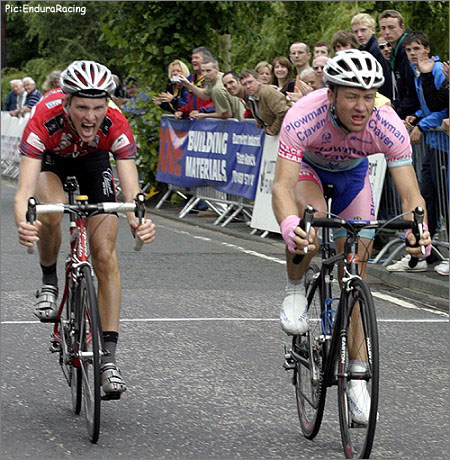 Gary Hand comes in an excellent second to Evan Oliphant at the Scottish Road Race Championships.

PEZ: Do any of the riders get wages?
Gary: Not this year, we have to start somewhere, but there are performance related bonuses in place.

However, it’s in their hands, if we get the results in 2009, our sponsors would be willing to provide wages in 2010.

PEZ: Support staff?
Gary: Our rider/coach is Mark Smith who knows how to interpret SRM and Power Tap data; all of our riders are using one or the other as a training aid (the team is working with TrainingPeaks as well)

Ollie Fox is our accountant; he has been doing the liaison with British Cycling and UCI (lucky man!)

Jonathan McBain of Pedal Power is our DS and mechanic and Greg Byron is our PR guy. 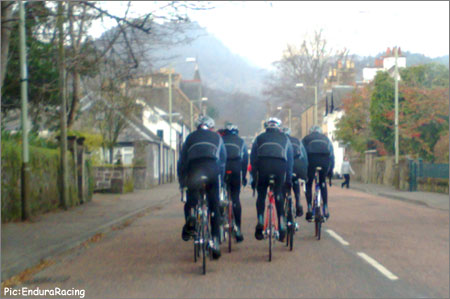 PEZ: Bikes?
Gary: We were very lucky to get Giant aboard, they want a presence in the British peloton; we’re getting the TCR Advanced SL’s which are beautiful and seriously light.

Cavendish has won all those races on them so there’s no need to say any more, really!

Groupsets and wheels are Shimano and tyres are by Continental.

PEZ: Clothing?
Gary: Obviously with Endura being a clothing manufacturer we have that well covered, the kit is being designed at the moment.

And I can tell you that we’ll be keeping our ‘trademark’ tartan – Garmin have their Argyle, we have our tartan!

MET are coming aboard to provide road race and time trial helmets.

PEZ: Vehicles?
Gary: In addition to the financial support we’re receiving from our sponsors, they’re providing a new custom team mini bus with a compartment for the bikes, plus we’ll have our team car.

PEZ: How do you frame your programme and how do you get in to the races you want?
Gary: The main thing is that we have to keep our sponsors happy; the directors at Endura want to push the name into Europe and Scandinavia, perhaps not so much into countries like Belgium, France and Italy where there’s already huge competition but places like Norway, Ireland and Poland where there’s good business to be done.

Endura have contacts in Poland and we’ll be using those to get into races there.

We also have to target races that suit our rider’s capabilities; and the invites have started to come – we’ve just had one for the Tour of the Pyrenees (won in 2008 by PEZ regular, Dan Fleeman.) 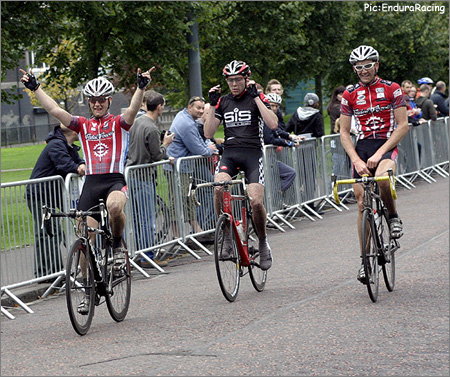 PEZ: Is there are danger that with a squad this strong, you’ll kill Scottish racing?
Gary: With no disrespect to my Scotland, that’s not where our priorities will be in 2009.

We’ll be riding Premier Calendar and UCI events in England plus our trips into Europe; we won’t be racing at home an awful lot. 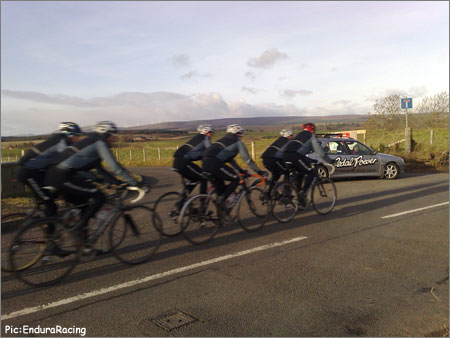 The team gets in some November miles.

PEZ: 2009 will be a success for Pedal Power-Endura, if . . . .
Gary: We work as a team; get into the Tour of Britain, show well and all of our riders develop their potential.

Be sure to check out British Cycling’s article on Endura Racing as well!

***
We’ll be talking to Gary as the season progresses, but meantime – careful with that cage fight chow, Gaz!