The tall, raw-boned rider ambled across to the barrier; he was broad and square across the shoulders, big-thighed and walked with a loose-limbed gait. His long legs made easy work of straddling the steel fence which separated the riders’ enclosure from the paying public at the Gent Six back in the early 80’s. As he headed off to his cabin, a mechanic looked-up from the already gleaming machine he was polishing and gave a cheerful; ‘Hi Gary!’ The rider said nothing, but acknowledged the greeting with an ‘energy-saver’ nod.

My buddy, Fraser who was staying in Gent at the time, explained the dynamic to me; “that’s Sercu’s (Patrick Sercu, undisputed king of the sixes, with 88 wins) personal mechanic, he speaks to no one, he thinks he’s superior to everyone. He always talks to Gary though – “nobody messes with The Doc!”

‘Nobody Messes With The Doc!’
I’ve carried those words in my head for more than 20 years, I always wanted to put them in print, but not under these circumstances; on Friday January 25th 2008 Gary Wiggins died, the local Newcastle Herald reported it thus:

MYSTERY surrounds the death of a man, 55, found unconscious in a street at the beginning of a violent Australia Day weekend in the Hunter. Police have formed Strike Force Durbin to investigate the circumstances that led to the man’s death. He was found in Segenhoe Street, Aberdeen, about 7am on Friday. The man, from Muswellbrook, was taken to Muswellbrook Hospital then flown to John Hunter Hospital, where he died. Hunter Valley police could neither confirm nor deny whether the man had been bashed. A NSW Police spokesman said the death was being treated as suspicious.

So ended the life of a man who was one of the top-ten ranked Six Day riders of his era.

Gary Wiggins, father of the current Olympic pursuit champion, Bradley Wiggins rode 73 sixes in his career, including a win at Bremen in 1985 with Britain’s Tony Doyle. The big man from Yallourn in Tasmania also picked up the European Madison Championships that same season, again with the Englishman. The madison champs was always hotly contested; wearing the jersey which went with the title guaranteed the winners better contract fees from Six Day promoters. 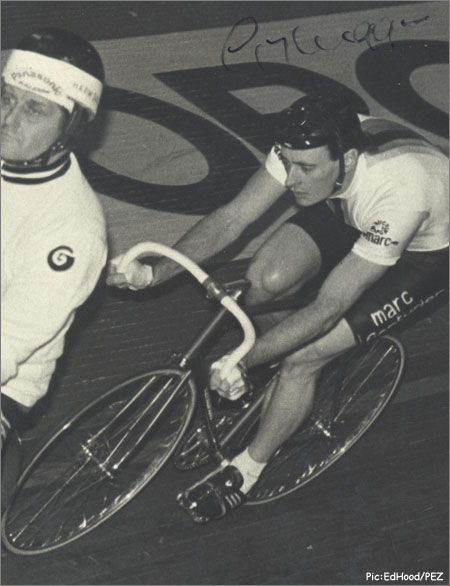 The cycling club that Wiggins raced for back in his junior days, Latrobe CC ends its tribute to him on their website with the words; “He may not of (sic) been a superb role model but he was a talented professional cyclist.”

Even in death, Wiggins is controversial; a friend of mine tried to raise a “thread” on a popular British internet cycling forum, but the moderator withdrew it; “so as not to upset his family.”

“His family” is, of course his son, triple Olympic cycling medalist, Bradley Wiggins. When Wiggins senior ended his career in the mid-80’s; abandoning Belgium (with the tax-man snapping at his heels) and heading back to the other side of the globe, he left his wife, Linda and young Bradley to return to London. The Latrobe CC website comments; “A decision that Society and his son have judged over the years.”

A few years ago, when I first started to write about cycling, I suggested to my editor that I do a piece about Gary Wiggins’s career. The reply was along the lines that Bradley didn’t like to talk about his dad or see stuff like that in print, so best not stir any slumbering canines.

An article in the Australian ‘Herald’ newspaper quotes Wiggins’s sister who explains that whilst Gary may have been estranged from his boy, she found several scrap books of cuttings about Bradley, when she was going through her brother’s personal effects; he was certainly proud of his son, even if he didn’t shout about it – but that was never his style.

On those wonderful (or sad, depending on your point of view) Belgian web sites which list the teams and palmares of every pro bike rider in the history of the world, there’s usually a reference to the, ‘rider’s nickname,’ World Champion Paolo Bettini is, ‘Grillo’ – ‘cricket,’ for instance. However, there’s no reference to Wiggins’s nickname, “The Doc,” – we’ll let you work that one out for yourself.

When you speak to those that knew him, there are different Gary Wiggins to consider.

Wiggins: The Laid Back Aussie
His frequent Six Day partner, and a man whose life we’ve looked at in the past on PEZ – Maurice Burton – told us about the man with whom he’d exchanged many-a-handsling.

The three us were going up to Manchester to ride a meeting at Fallowfield track. Gary and Sanders had this old Thames van that they had bought for ten pounds, they splattered the number plates with mud, so the thing couldn’t be identified. The door locks didn’t work and you had to sit, holding the doors shut as you drove along the motorway! When they arrived to pick me up, they didn’t have any shoes on; it was an Aussie thing, if the weather was nice then they didn’t bother with shoes. When my dad saw them and this old van, he thought; ‘what’s this he’s got himself into now?” 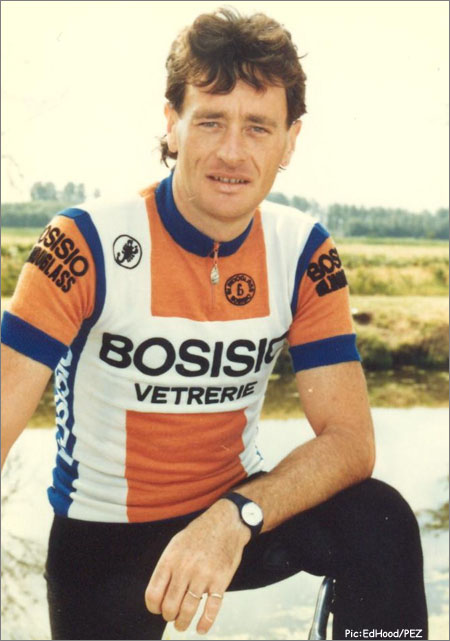 Wiggins: The Man Not To Cross
There was a darker side to the man though; Wiggins wasn’t a man for threats, usually the first sign you had over-stepped the mark was one of those huge fists connecting with your face.

My buddy Fraser recalls a time when Wiggins’ regular training partner, New Zealander John Mullan said the wrong thing whilst they were out on a training run, despite abandoning his bike and heading into the fields, ‘Mull’ couldn’t escape The Doc, who pursued him into the pasture land to administer his reprimand.

Fraser recalls another time when he was Wiggins’ ‘helper’ at a big madison in Germany; “I was standing beside the track when I heard a ‘bang’ and I thought to myself, ‘no – please, no !’ but it was ‘yes!’ his partner, a German rider had punctured and it was down to me to change the wheel – Gary wouldn’t pay for a real mechanic, you see. A couple of the officials got my rider down of the track and I realised that it was the rear tyre which had punctured and you only get three laps to change the wheel.

Wiggins and his partner were lying second so there was big prize money at stake; as I wrestled with the wheel, I could feel Wiggins eyes burning into the back of my head from the top of the banking. I pushed the rider back into the race, but as I did that I was planning my escape route out of the stadium in case his chain came off. If it had, Wiggins would have killed me, so I was just going to flee and get the train back to Belgium!”

Wiggins: The Loyal Friend
But the six day game was not, and is not, for the faint-hearted, as Maurice said; “the business we were in – you had to be a little bit hard sometimes and Gary could be ruthless.”

Dirk Van Hove knew Wiggins better than most and spent much of his spare time during Wiggins’ career, accompanying the big Aussie to races; “Gary was a generous person, when I was made redundant, he would come over to my house and say, ‘come on, don’t worry about money, we’ll go for a meal and a beer – I’ll pay!’ If you were in a tricky situation, he would stand in front of you and take the punch, I know this 100%! He didn’t say much and perhaps didn’t come across well, but he was a smart guy, he’s seen a lot of the world and of life; when he’d had a few beers and was relaxed then he’d talk a lot more, he was a very smart guy, it’s just a pity people didn’t see that side of him. If you were his friend, you were his friend for life.”

What Sort Of Bike Rider Was He?
Maurice says; “he was very strong, and he had a constitution to match – a hard guy.”

Dirk is more effusive; “He was one of the strongest riders I’ve ever seen, aggresive and always wanting to win. He didn’t always have the best partners in the Sixes. When he was with Doyle they won the European madison championships. He could also win Belgian pro kermesses, and as anyone who knows will tell you, that’s not easy!

Barry Hoban was one of the finest sprinters of his generation, and he couldn’t win one. 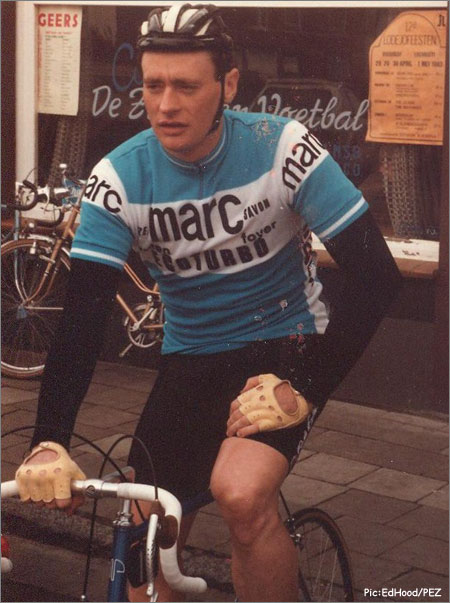 As a road rider, the sport never saw the best of Gary Wiggins; his road programme was designed to prepare him for the lucrative Six Day season. But he earned good money in those kermesses, consistently finishing among the prizes.

The last years of Wiggins’ life weren’t the best for him, he worked as a window cleaner, a bike mechanic, in a garage, as a painter and decorator, in a super market; and whilst he’d always ‘liked a beer,’ his drinking had perhaps gone a little beyond that.

Wiggins’ ‘glory days’ weren’t well reported back in the Antipodes in those pre-‘net days and the lack of recognition was a source of irritation to him. Dirk recalls; “when I went to visit him in Australia, after he retired, we’d walk into a bar and he’d point at some of his drinking buddies and say to me, ‘tell these guys about what I was like, back in Europe!’ none of them knew that he’d been such a good rider and had won a European title.’

Final Words?
Maurice; “he used to say to guys, ‘just because you’ve got a head like a spark plug, it doesn’t mean you’re a champion!’ that used to make me laugh. Seriously though, a man that did what he had to do, to get where he wanted to be.”

Dirk; “Maybe he liked the girls and the beer a bit too much. I sometimes wonder what he could have done if he’d looked after himself just a little bit more – but he was a great guy, a great rider and a great friend.”